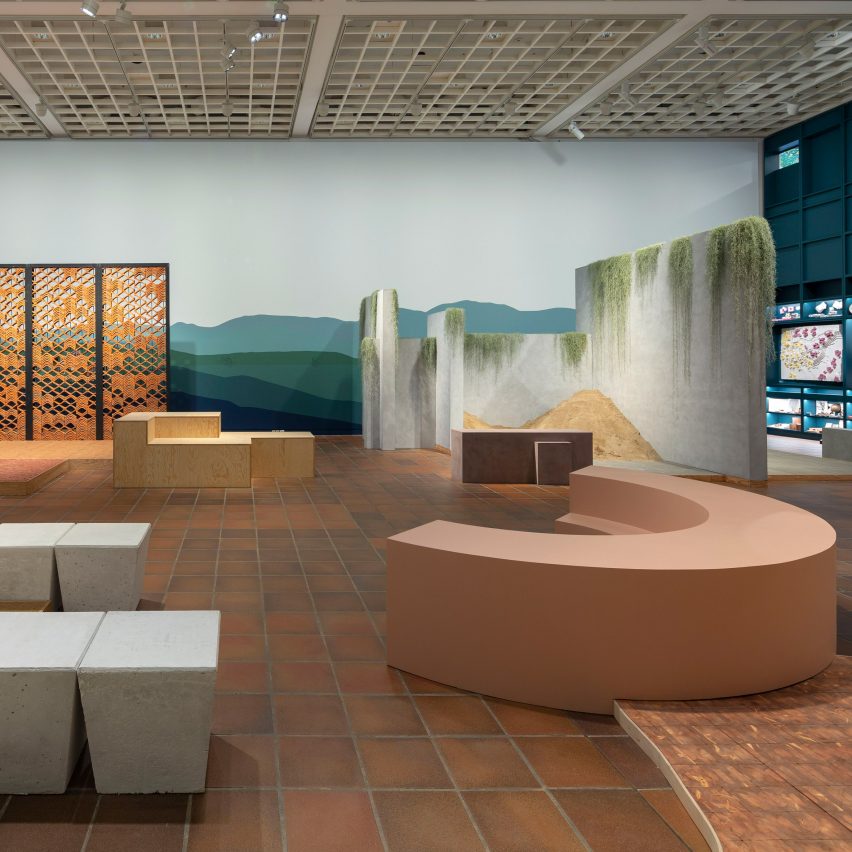 The work of Mexican architect Tatiana Bilbao is on show at the Louisiana Museum in Denmark, in an exhibition that includes an imaginary city, a cabinet of curiosities and four full-size architectural mockups.

The Architect’s Studio: Tatiana Bilbao Estudio is the first major international retrospective for Bilbao, 47, whose broad-ranging portfolio includes social-housing prototypes, a botanical garden, a pilgrimage route and an aquarium. 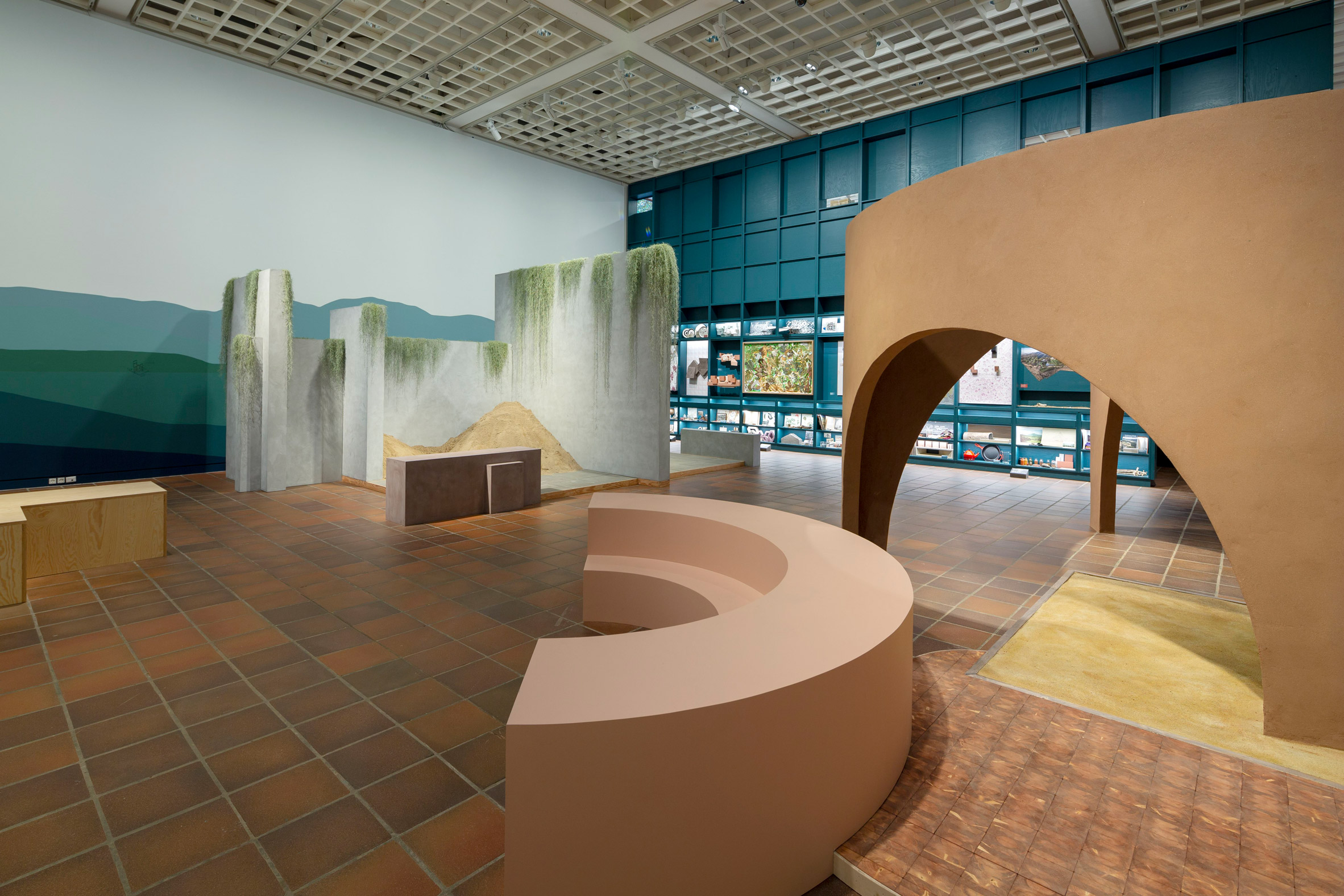 The show features an assortment of models, both large and small, along with hand-drawn sketches, collaged images and material samples.

The curation, by Kjeld Kjeldsen and Mette Marie Kallehauge, aims to show how Bilbao focuses on site-specificity and collaboration in her design process, and is uninterested in developing a signature style. 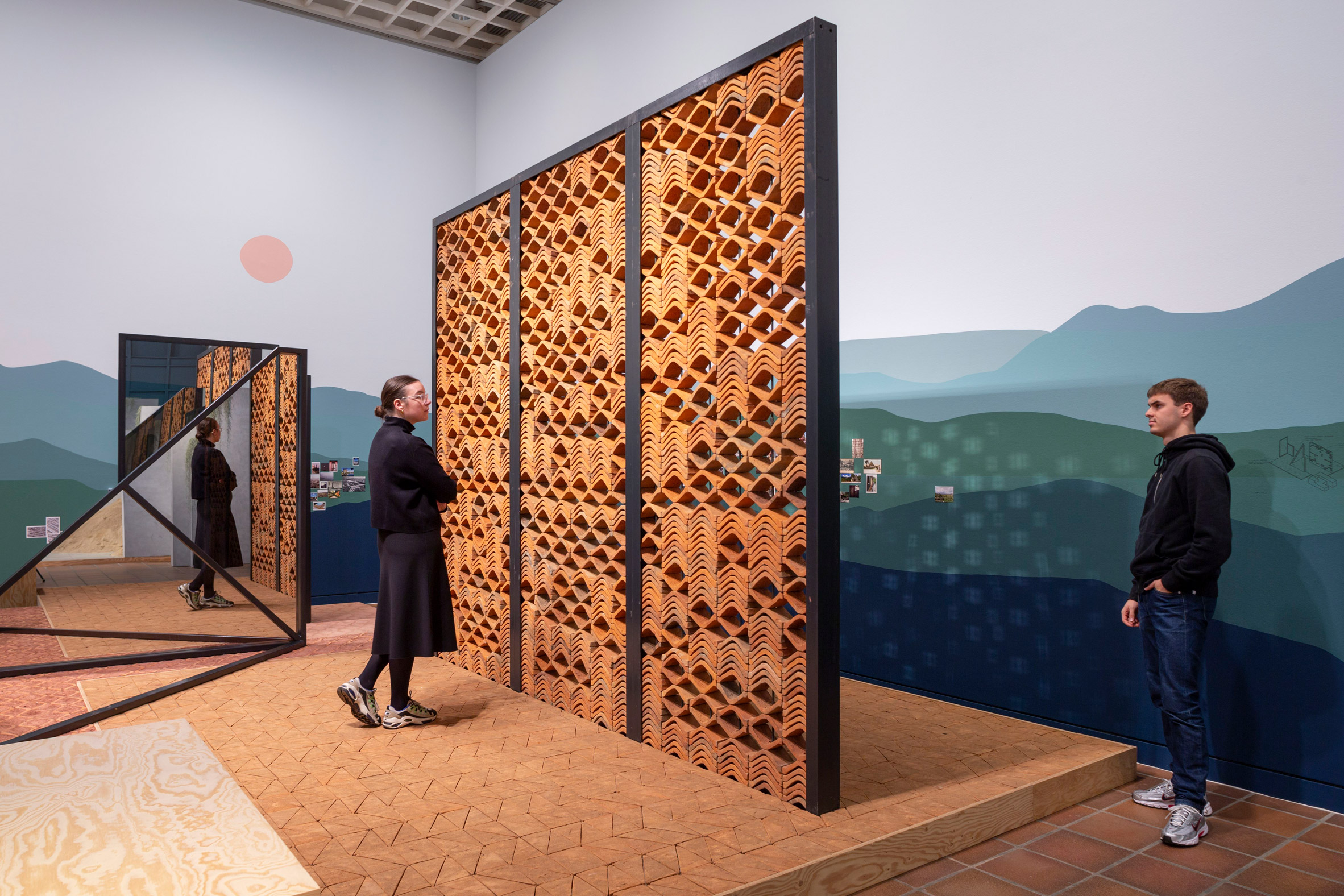 “She is preoccupied with the specific place and human beings,” reads their exhibition text. “She operates with closeness and the personal encounter, an approach which can nevertheless end in a major project in a megapolis in Mexico.”

A single image is displayed at the exhibition entrance. It is a collage that Bilbao created for a residential project, featuring a drawing done by hand overlaid on top of various images of gardens and landscapes. 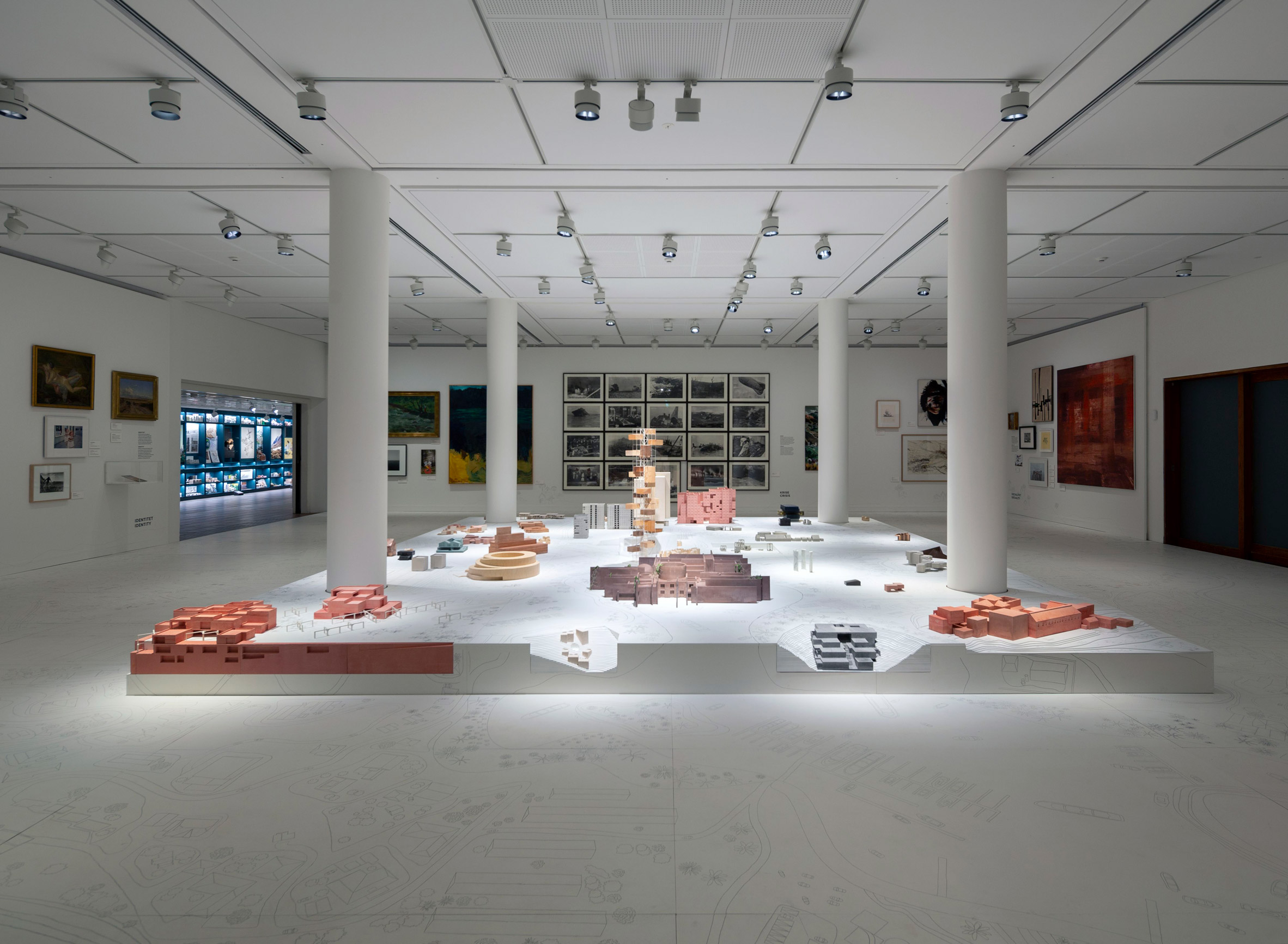 Kjeldsen sees collage as a particularly important aspect of the architect’s process. Not only is it collaborative, able to be worked on by several people, it is also open-ended – unlike a computer visualisation, it leaves some details open to interpretation.

“In the exhibition, you don’t see any sketches by computer,” Kjeldsen told Dezeen. “She wants to keep an analogue way of doing things. It’s the way she communicates with people.” 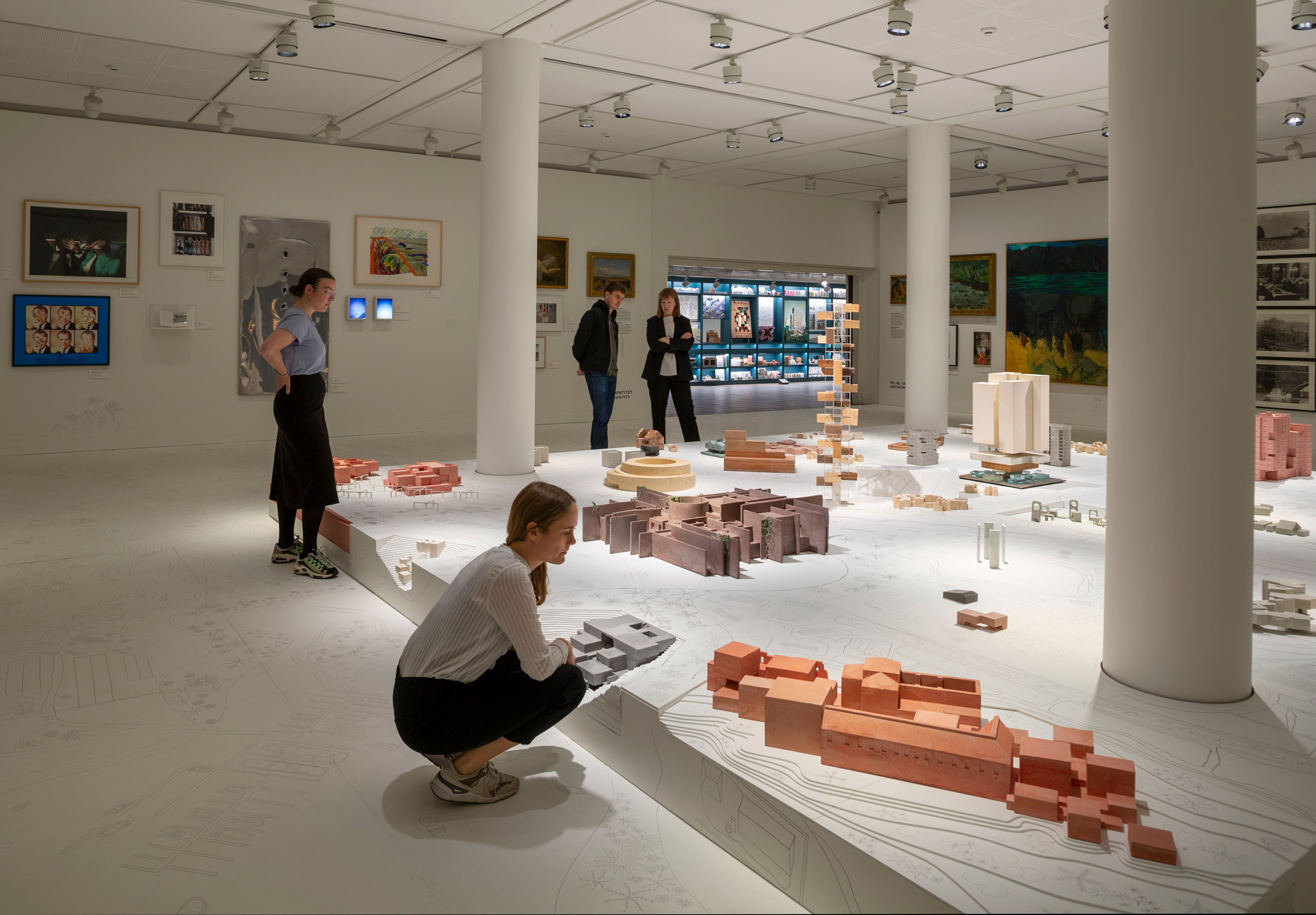 The show is divided into three sections. The first room, titled Landscapes, features a large plinth covered in models of projects both completed and in process.

These models are all the same scale, but made from various different materials, from pigmented concretes to woods. Highlights include the Mazatlan Aquarium and the Irapuato Music Hall and Sports Centre. 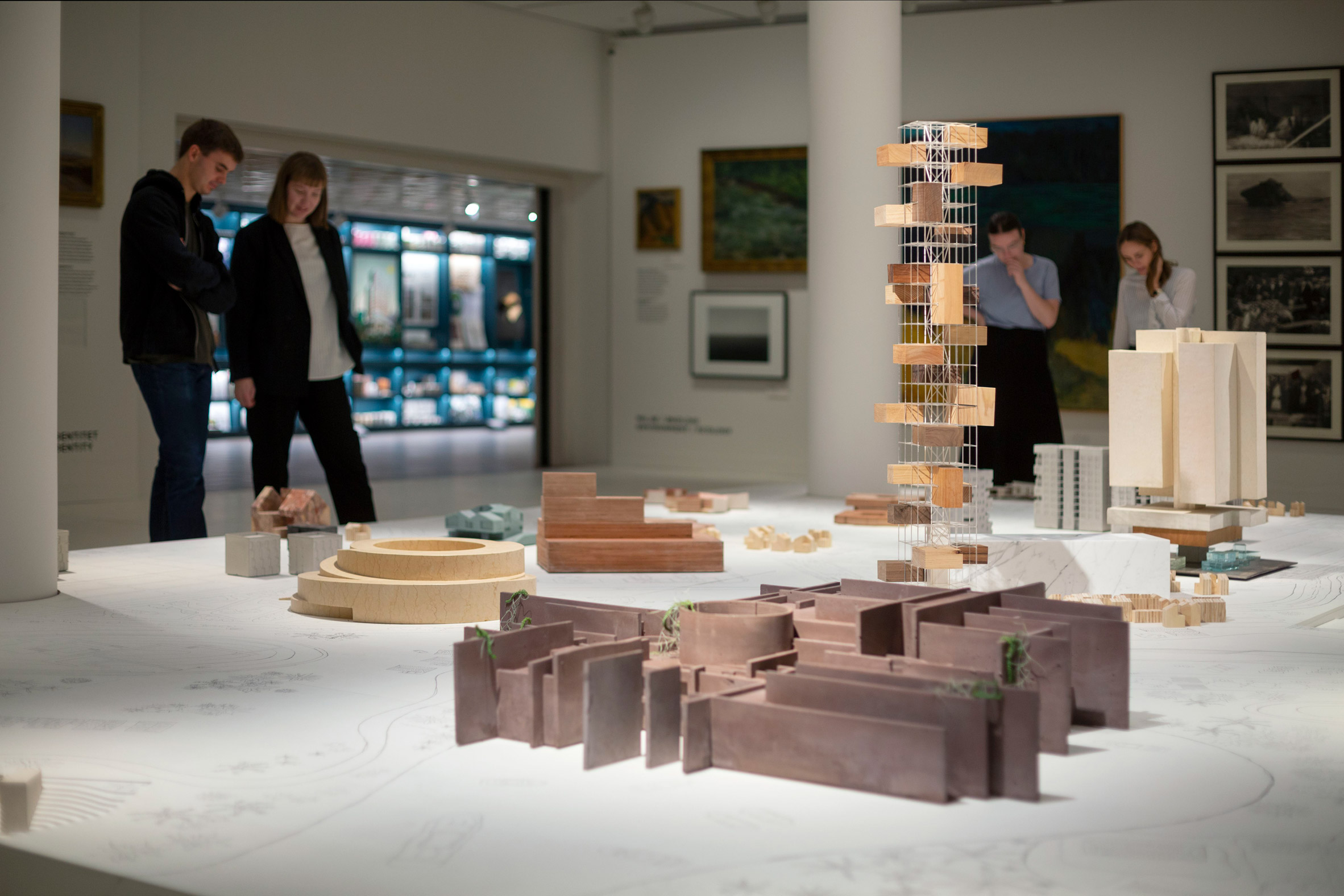 Beneath them, a hand-drawn map covers the surface of the plinth and extends out to cover the entire floor of the room. It connects all the projects, as if they were all built in the same city.

On the surrounding walls are artworks from both the Louisiana’s collection and the Museo Nacional de Arte in Mexico City, intended to set up the idea of a cultural exchange between the two different contexts. 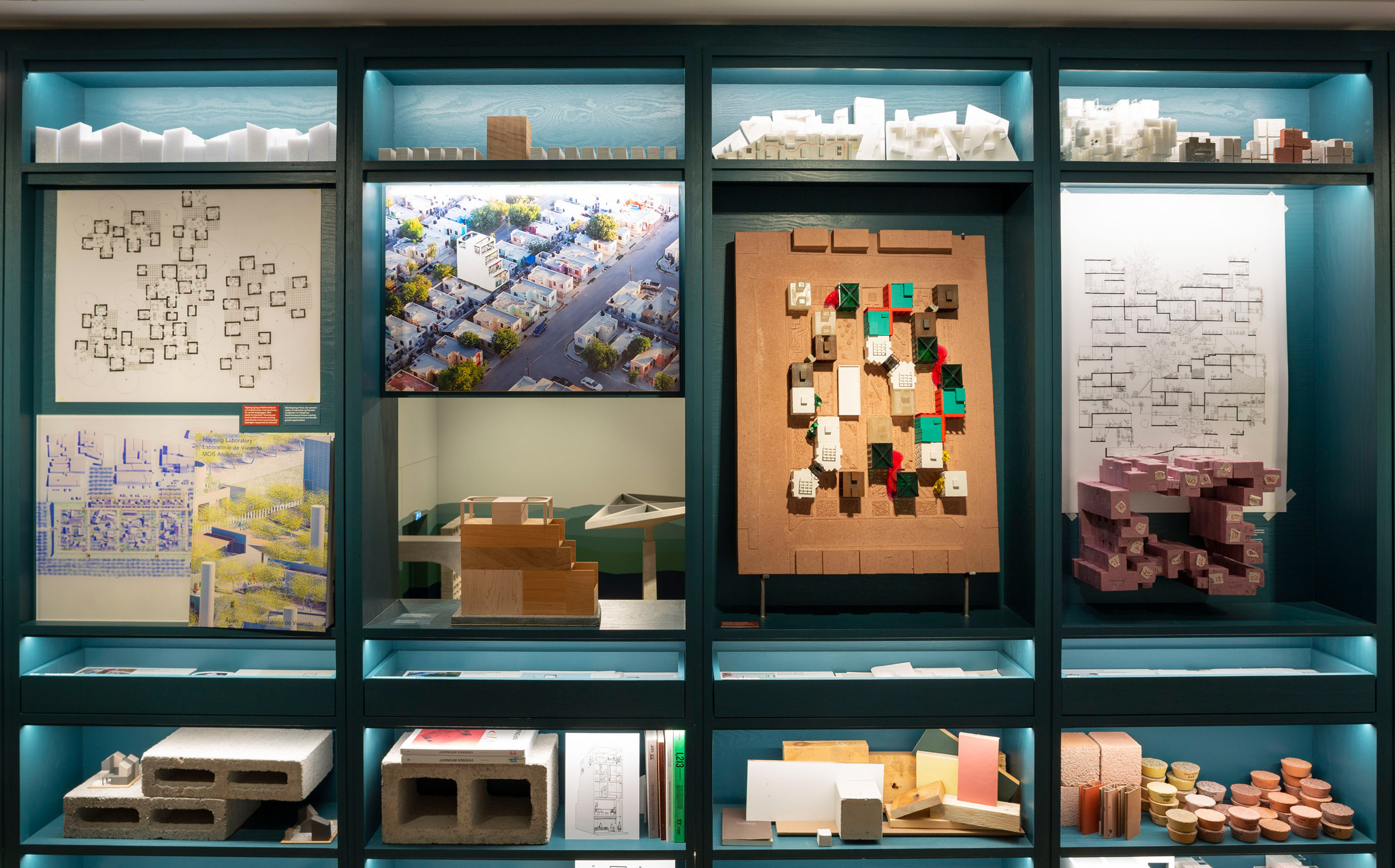 The second area, titled Curiosities, consists of a bright-blue wall of shelving that displays the ideas and objects that have shaped Bilbao’s designs.

It includes plenty of collages, along with drawers full of archive materials that visitors can explore. 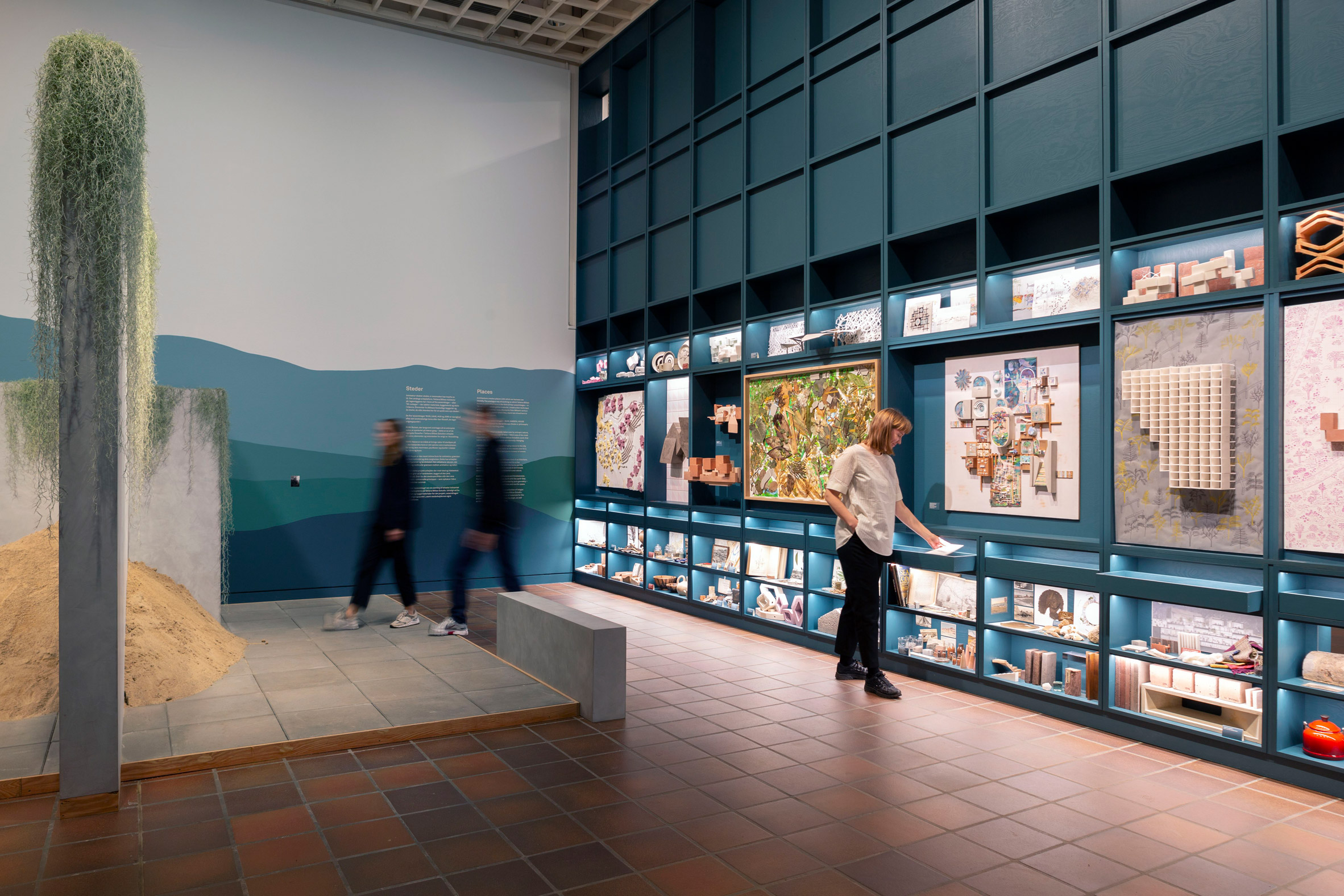 In the main exhibition space, the curators worked with Bilbao’s studio to produce full-size fragments of four different buildings.

Called Places, this section shows how the architect works with both natural and mass-produced elements and materials. 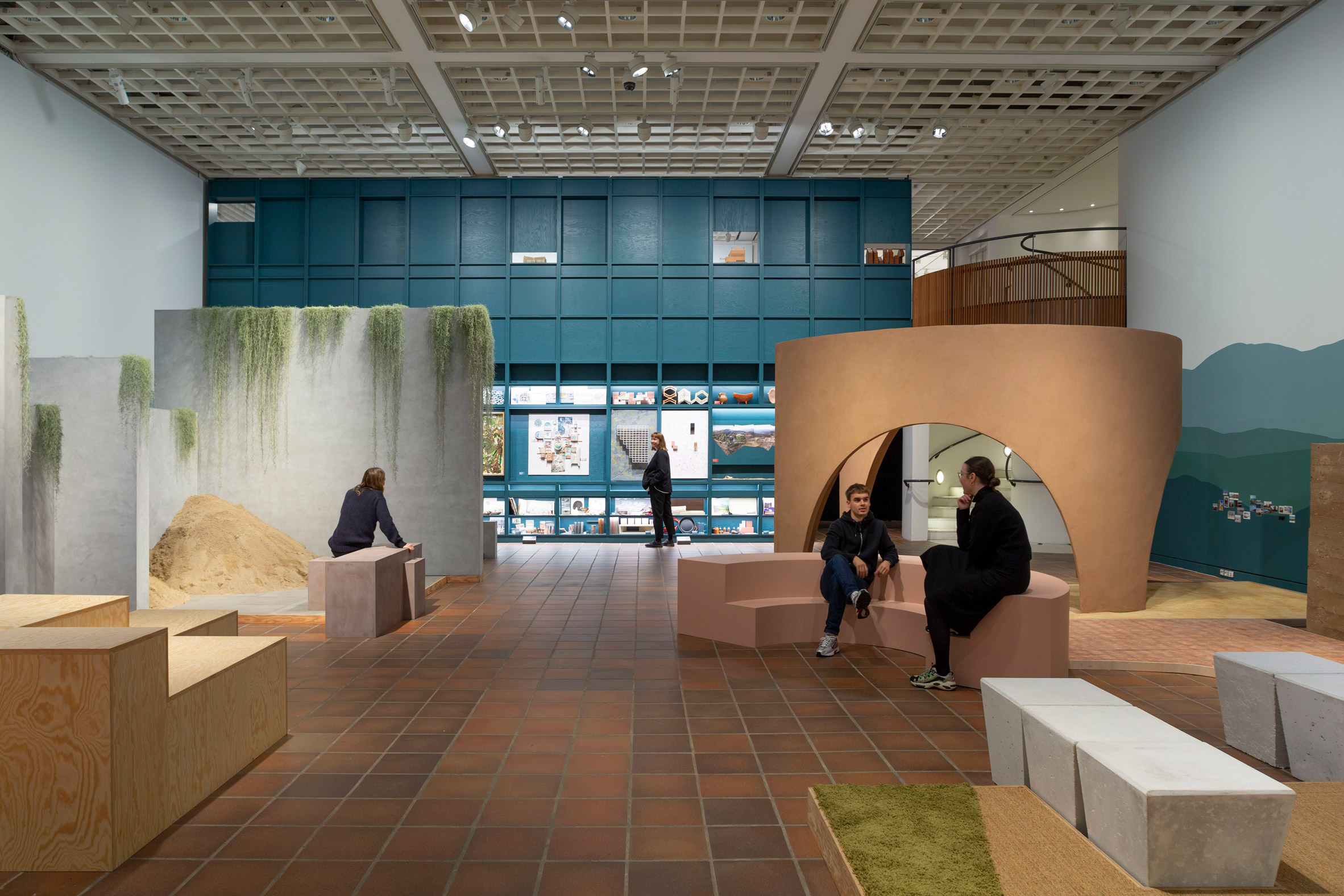 Mirrors are positioned alongside walls made up of ceramic tiles to represent Casa del Bosque, a holiday house in Monterrey. Meanwhile the Culiacan Botanical Garden is represented by a mix of concrete elements and carpets.

The Mazatlan Aquarium also reappears in this section, alongside the new, rammed-earth house Staterra. 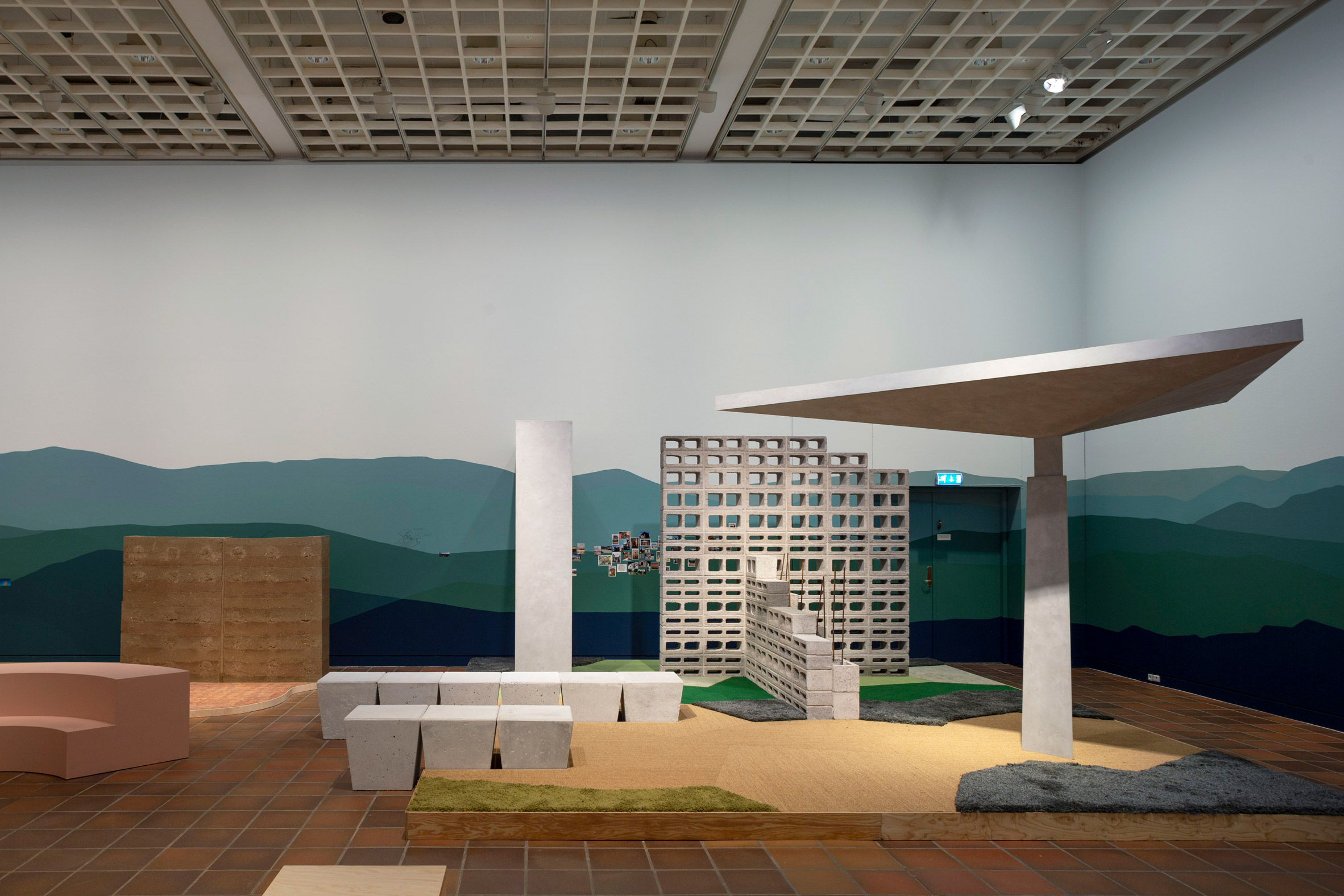 This is the third exhibition that the Louisiana has hosted as part of The Architect’s Studio series, following retrospectives of Wang Shu and Alejandro Aravena. Bilbao will be followed by another female architect, Anupama Kundoo.

“Of course, the whole exhibition series is to do with different cultures,” said Kjeldsen, who came up with the idea for the series. 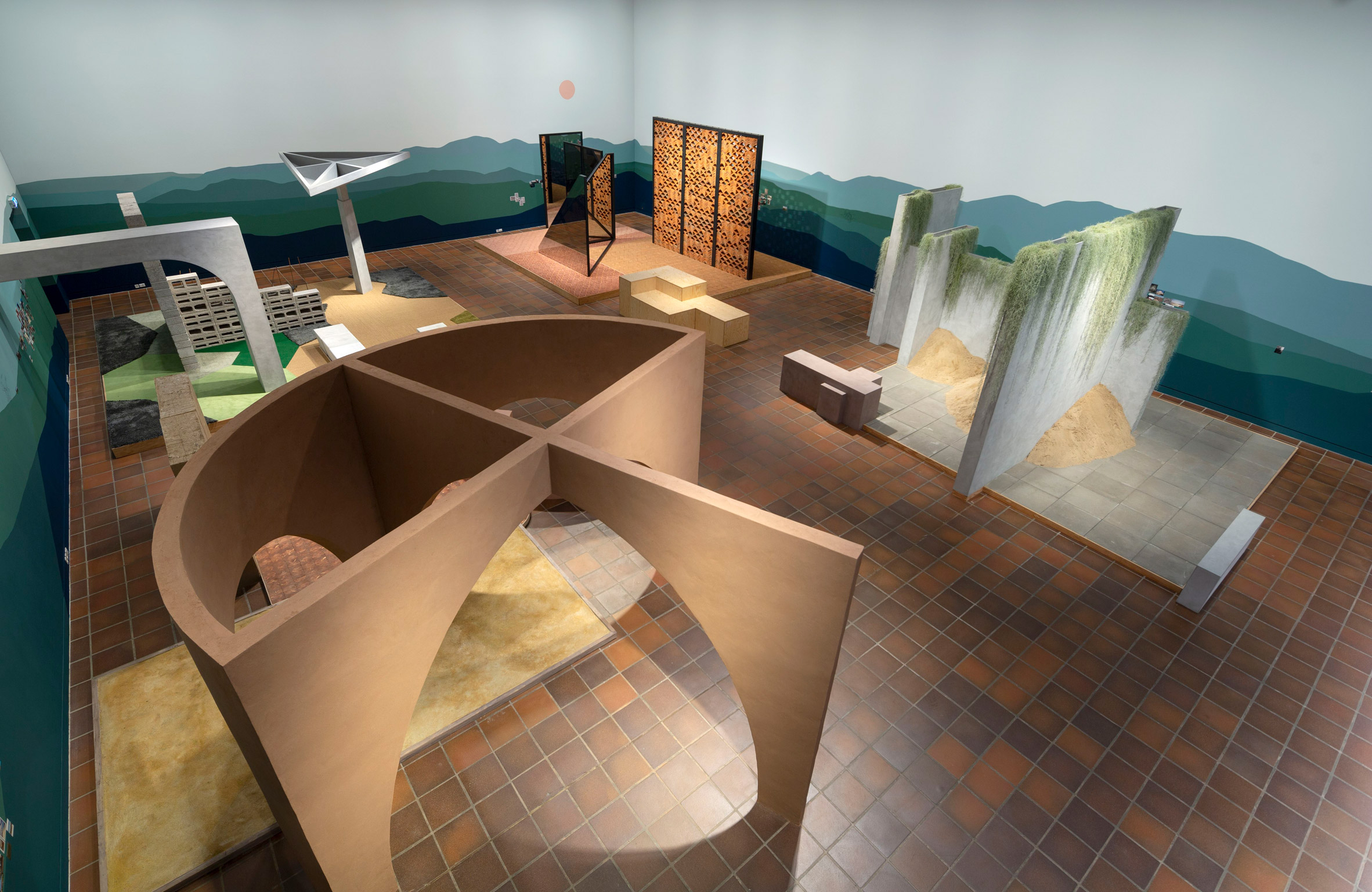 The curator hopes that visitors to the show will see Bilbao as a kind of Robin Hood character, in the way that she uses the proceeds from some of her high-end commissions to fund her more socially driven projects.

The exhibition continues until 5 April 2020.