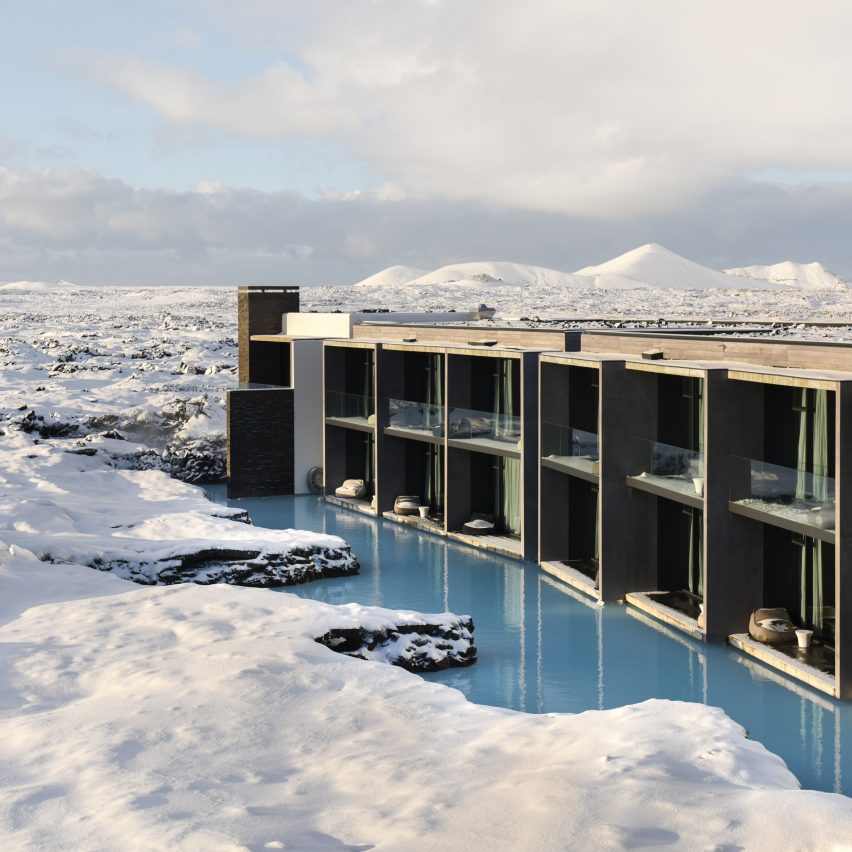 Design Group Italia chief design officer Sigurdur Thorsteinsson explains how The Retreat at Blue Lagoon Iceland immerses guests in nature in this video produced by Dezeen for the AHEAD Awards.

The 62-room resort hotel is embedded in the lava formations and turquoise geothermal pools of Iceland‘s Blue Lagoon complex, which is situated within the UNESCO Global Geopark.

The Retreat at Blue Lagoon Iceland was awarded in the Resort Hotel category at the AHEAD Europe hospitality awards, which took place in London in November.

Design Group Italia handled the project’s interiors, in collaboration with Icelandic firm Basalt Architects who were responsible for the architecture of the resort.

“The brief here was to make something that would fit very well into nature” explains Thorsteinsson in the video interview, which was shot by Dezeen at White City House in London on the day of the AHEAD Europe ceremony.

“We wanted basically to have continuity between nature, the interior and exterior,” he continued.

The interiors of the resort feature colours and materials that reference the striking landscape of lava, vivid green moss and bright blue water that surround the Blue Lagoon complex.

“We have very tactile surfaces,” said Thorsteinsson. “We brought lava blocks into the building, and we treated it as a building material or as a furniture material.”

Thorsteinsson stated that the resort has been designed to offer guests an experience of tranquility and isolation from the outside world.

“When you come to the hotel, this world opens up to you, a bit otherworldly almost,” he said. “When you enter the building, you’re passing into a sanctuary.”

The centrepiece of the hotel is its spa, which offers a series of indoor and outdoor baths and treatments that make use of the site’s mineral-rich geothermal waters and naturally occurring materials, including silica and algae.

According to Thorsteinsson, The Retreat at Blue Lagoon Iceland aims to reconnect visitors with the natural world and instil a humbling impression of nature that he feels is lost on city dwellers.

“Apart from relaxing, we wanted people to come away with more respect for nature, and a better understanding of what nature is and how wonderful it is,” he explained.

“When you live in big cities, you don’t see nature and you don’t think it is stronger than you,” he continued. “In Iceland it’s very easy to get connected, because nature is so strong and you’re aware of it and you know it’s stronger than you and we wanted people can get into that mood.”

“You want to go somewhere where you experience something different and something you can take home with you as a memory.”

This video was produced by Dezeen for AHEAD. It was filmed at White City House in London. Photography is courtesy of AHEAD and Design Group Italia.

The post The Retreat at Blue Lagoon Iceland offers “a better understanding of nature” appeared first on Dezeen.