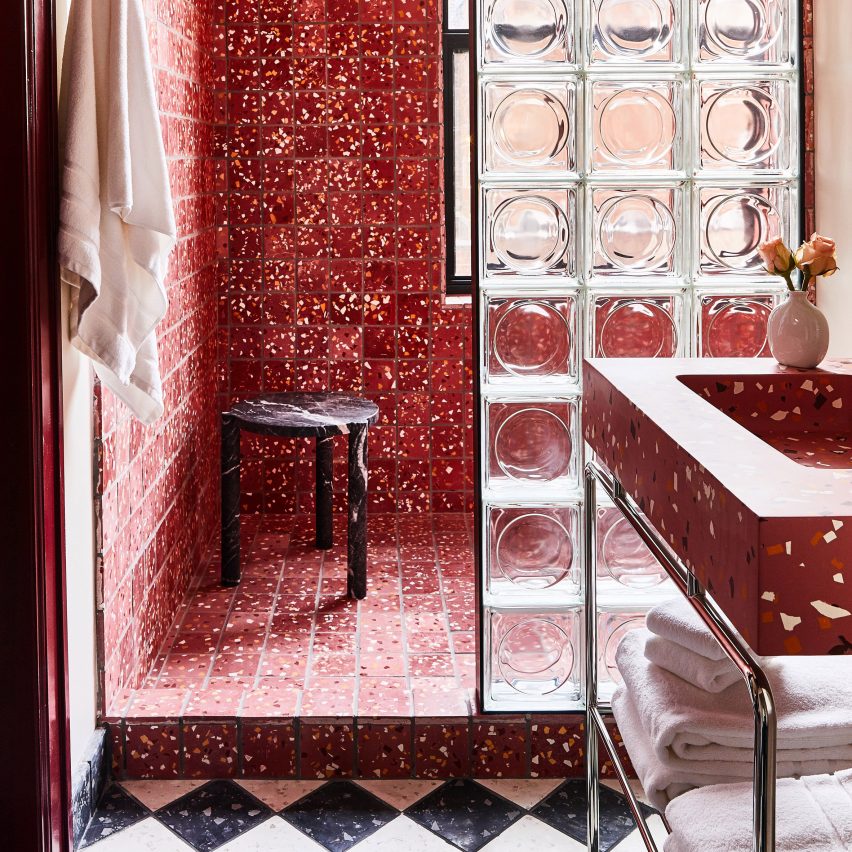 Bathrooms can easily be dismissed as the dullest room of the house, but there’s plenty of opportunity to play around with material and colour. Interiors reporter Natasha Levy has selected eight striking bathing spaces to learn from. 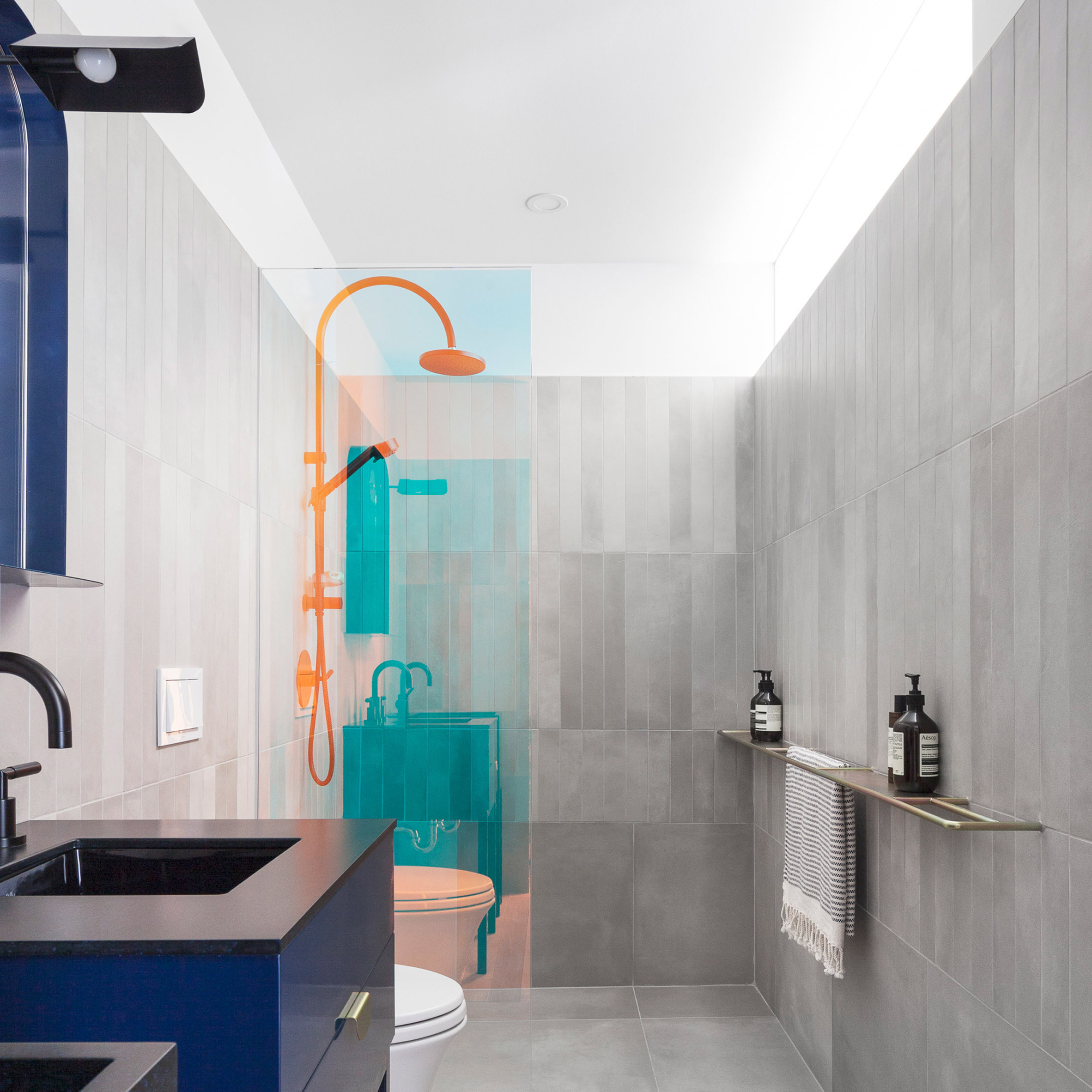 A statement shower screen adds interest to the otherwise greyscale interior of this bathroom, which sits inside a brutalist Montreal apartment.

Made from diochroic glass, the screen casts the cubicle behind in shifting shades of green, coral-orange and aqua-blue. The vanity stand has also been completed in navy blue. 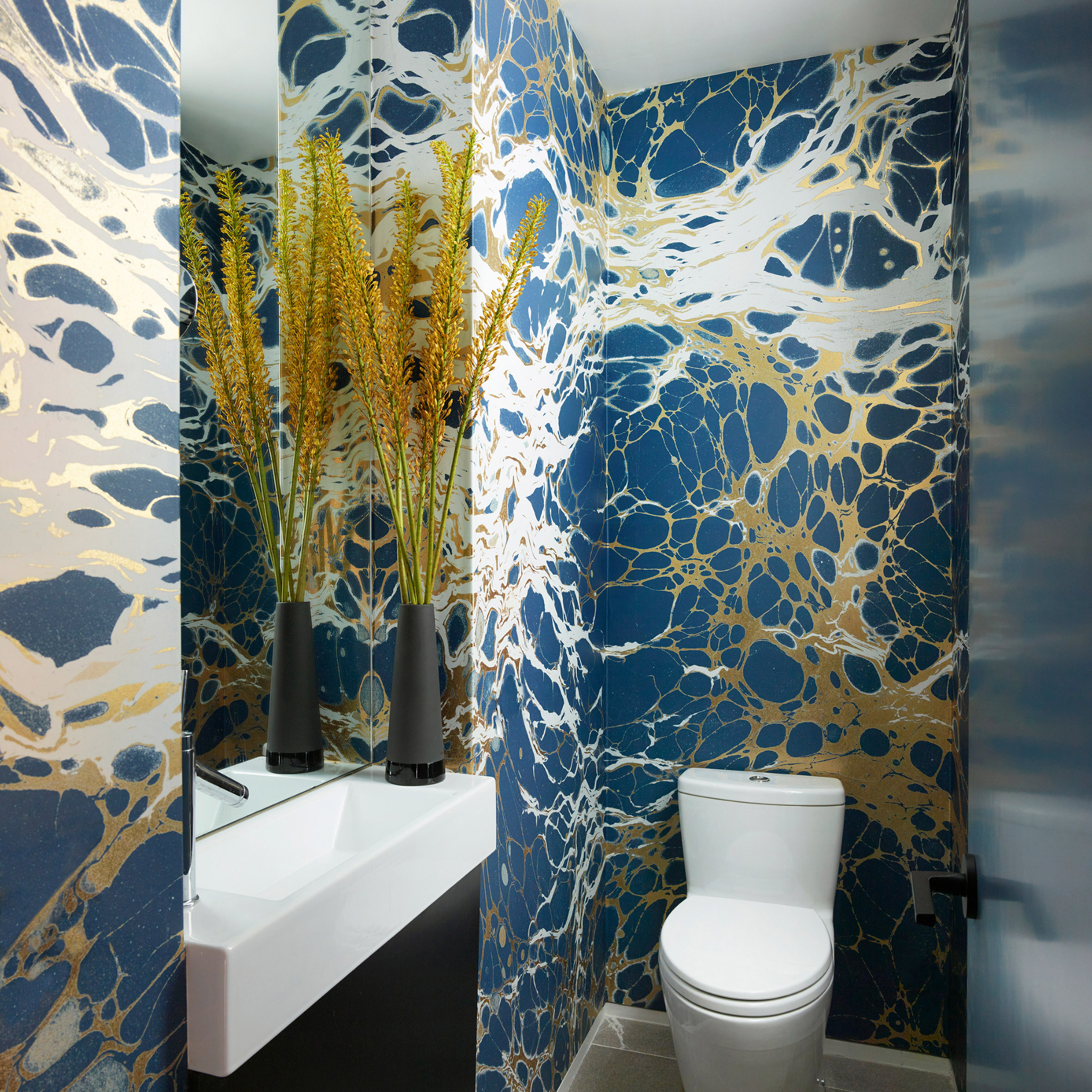 Blue, gold and white wallpaper printed with aqueous bubbles and streaks covers the bathroom of this San Francisco home, which belongs to a tech entrepreneur.

The rest of the home has been completed in a similarly bold aesthetic to avoid seeming “too done and perfect” – its secondary bathroom boasts ombre walls which fade from pink to blue. And Y, Russia, by Eduard Eremchuk

In a nod to the aesthetic of subway stations, architect Eduard Eremchuk used different tiles to deck out this Russian cafe: floor tiles in the main eating area are white, and those in the kitchen are pale blue.

A surprise is offered in the tiled bathroom, where every surface – including the sink – features a crazy black-and-white cow print. Simple white tap faucets finish the space.

Find out more about And Y › 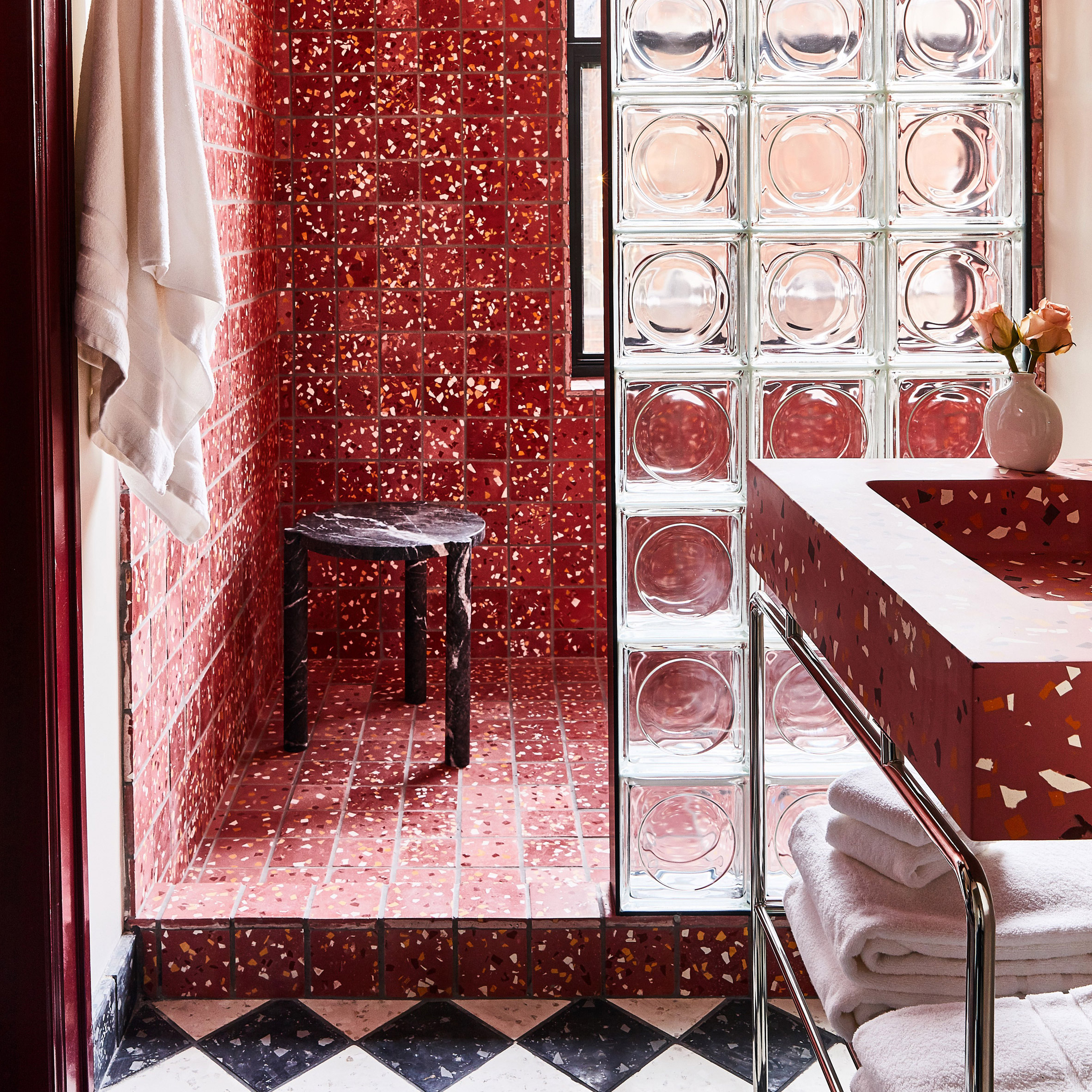 Bathrooms are just as striking as the guest suites inside The Siren Hotel, which ASH NYC designed to “call people back” to the city of Detroit.

Find out more about The Siren Hotel › 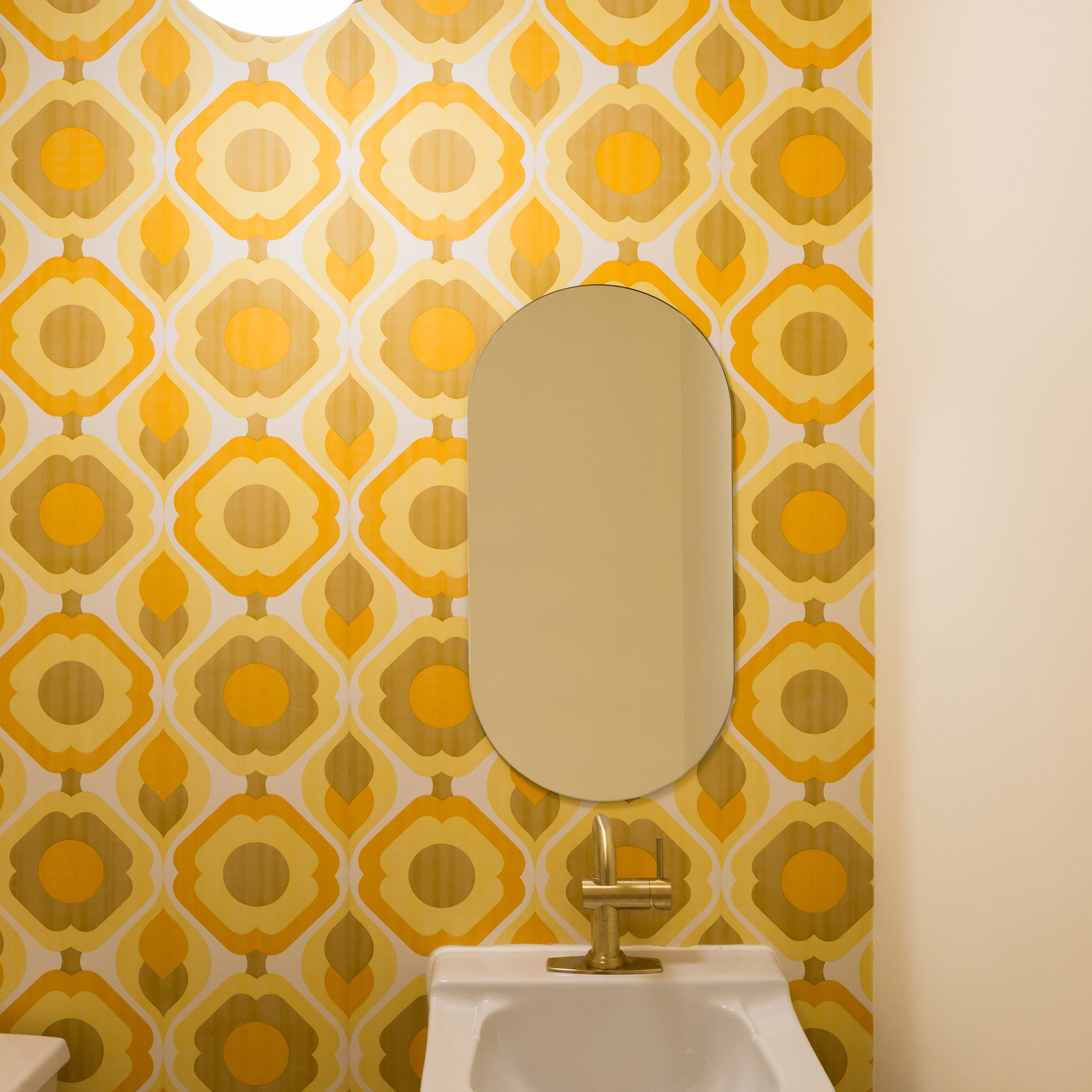 Vintage wallpaper originally produced in Italy during the 1970s covers the surfaces of this bathroom, which sits inside Vancouver restaurant Saku.

The room’s yellow hue is meant to emulate the “light, inviting and soothing” ambience of traditional Japanese eateries.

Find out more about Saku › The bathrooms that designer Martin Bruznizki created for Annabel’s – an affluent members-only club in London – offer a perfect lesson in opulence.

Walls are upholstered in chintzy wallpaper, while the ceiling is lined with thousands of hand-made silk flowers. Pink onyx washbasins and gold-framed vanity mirrors add an extra dose of decadence.

Find out more about Annabel’s › 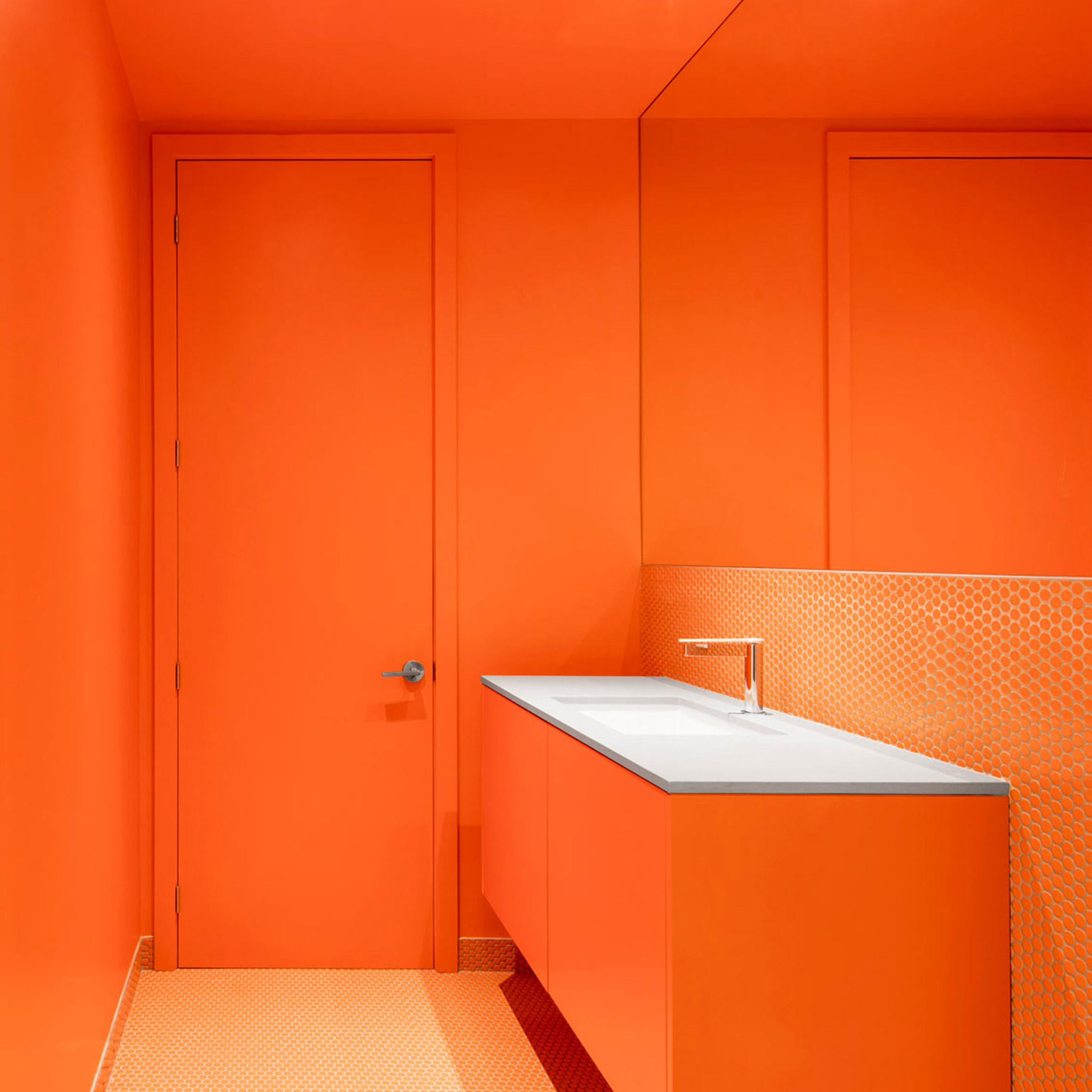 To “energise” this compact bathroom, Naturehumaine completed all of its surfaces in a hard-to-miss hue of neon-orange. Graphical interest is added by the micro-hexagonal tiles that cover the floor and splashback.

The vivid space is in perfect keeping with the rest of the Montreal home, which also features a canary-yellow staircase.

Find out more about Canari House › 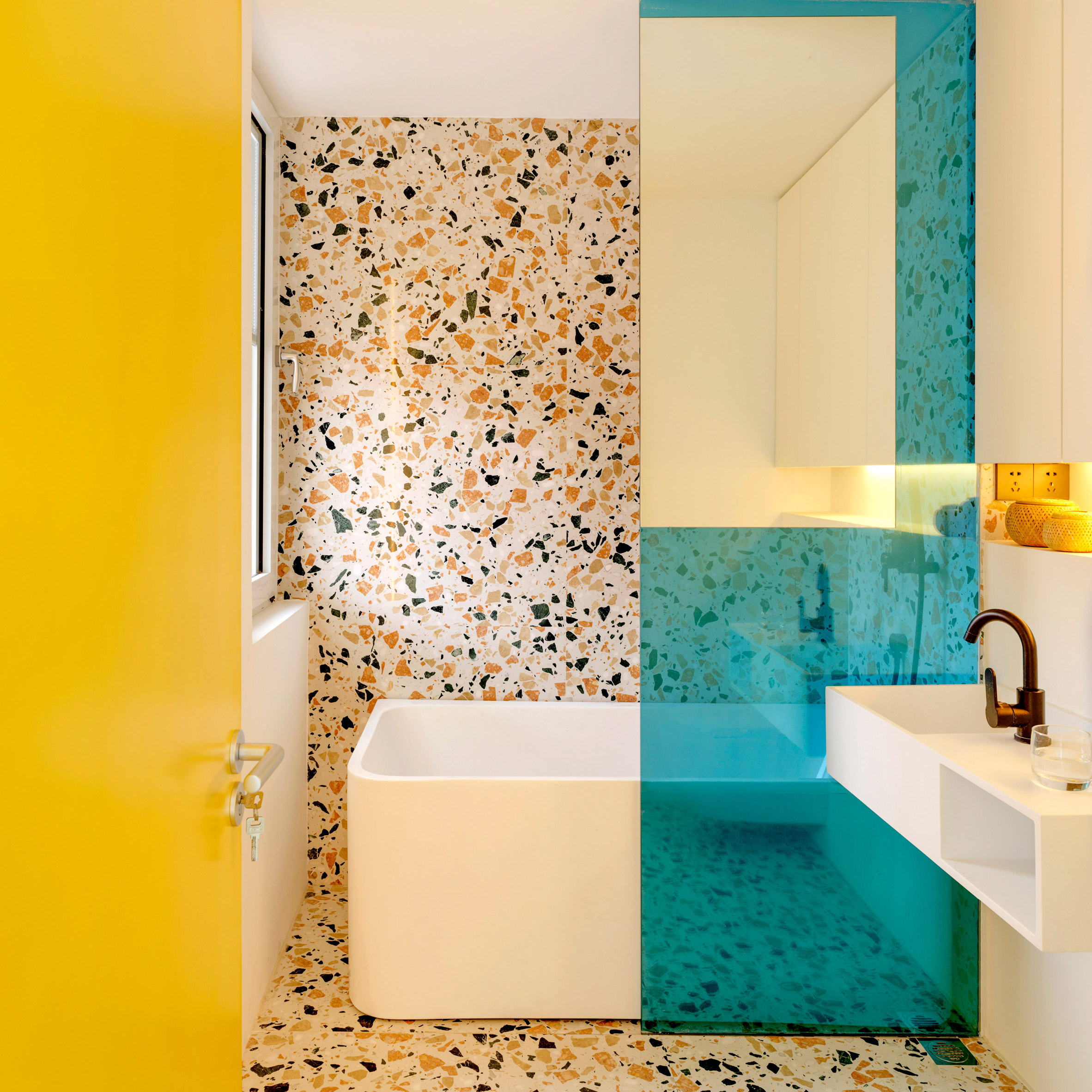 Sunny yellow walls run throughout the living spaces of this Beijing home, which MDDM Studio wanted to reflect the liveliness of its occupants – a young family.

This bright aesthetic extends into the bathrooms, which feature terrazzo surfaces inlaid with large chunks of peach, yellow and dark-green aggregate. An extra splash of colour is provided by translucent blue screens that separate the bathtub from the sink.

Find out more about House P ›

The post Eight bold bathrooms that make use of more than just white tiles appeared first on Dezeen.