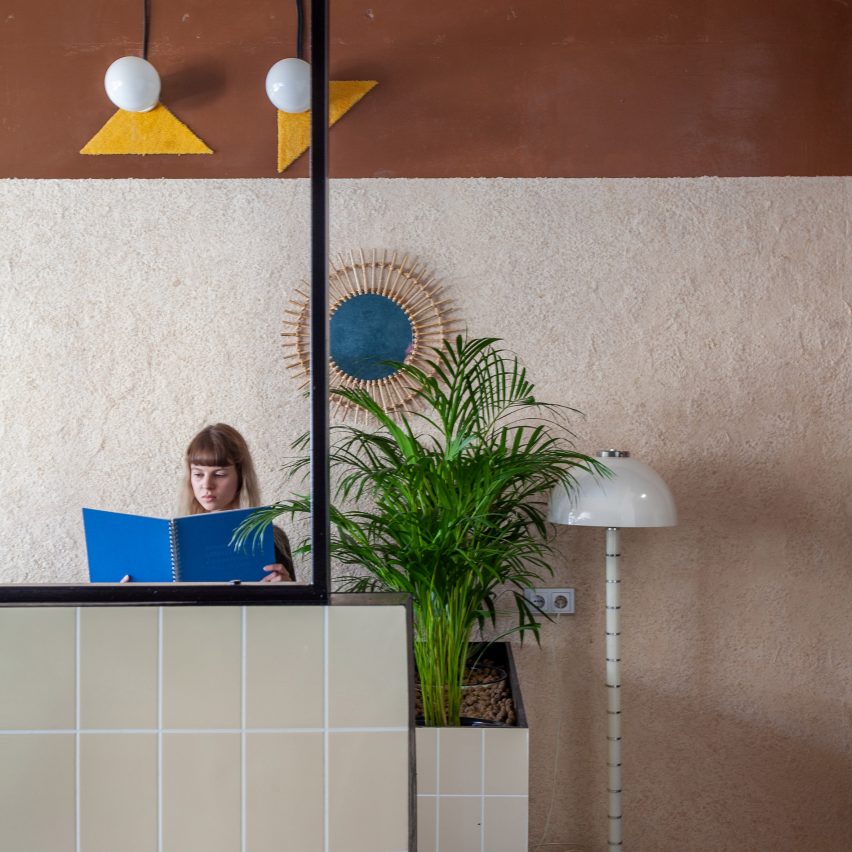 MDF tiles and blue carpet are some of the simple materials that architecture studio Dvekati has used to furnish this office in Moscow, which takes cues from the pared-back aesthetic of Soviet modernism.

Occupied by a PR agency called Rupor, the office measures just 45 square metres and is set inside a constructivist-style house that was built in 1927. 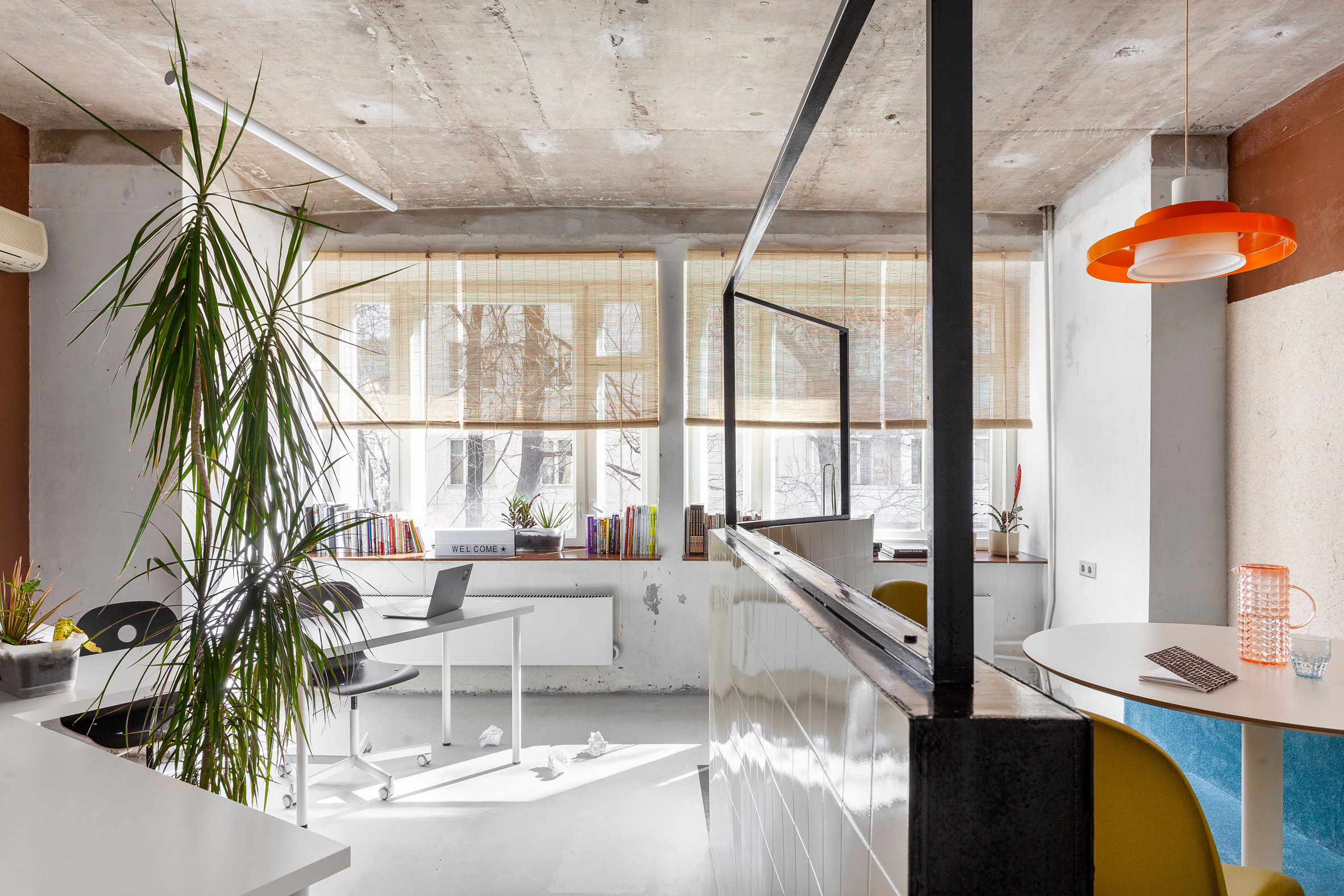 Working with a tight two-month timescale, local architecture studio Dvekati was asked by Rupor to create enough space for six to eight employees and a meeting area within the office’s rectangular plan.

The studio divided the compact, open-plan space into three functional areas – a workspace, a conference zone, and a kitchen – by inserting a podium and a waist-high partition wall. 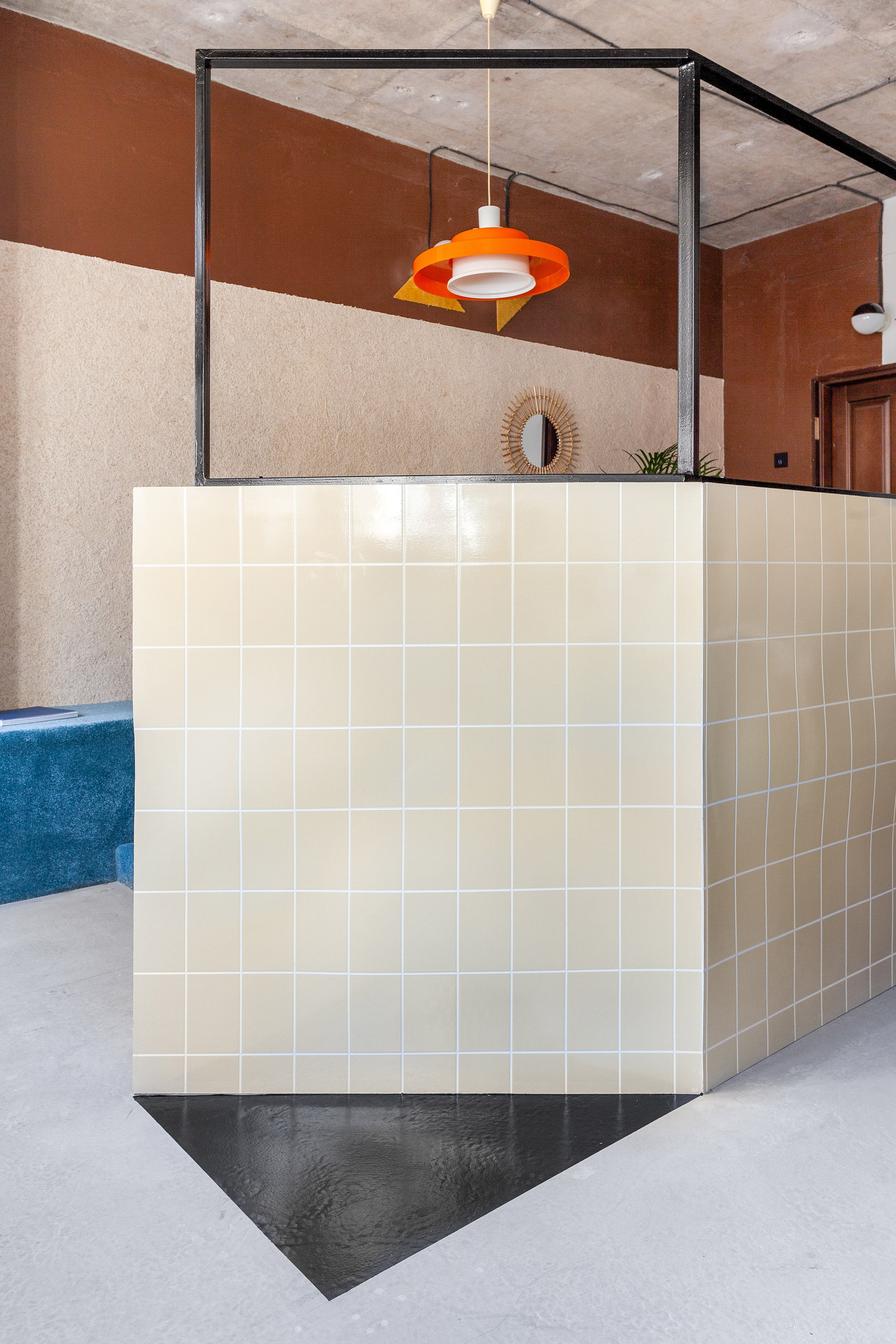 When it came to choosing fixtures and furnishings, the studio was particularly inspired by the modernist office interiors of 1960s Soviet research institutes, which placed emphasis on functionality and clarity of lines.

“By the 1960s, Soviet architecture and interiors got rid of unnecessary decoration and turned to the principles of modernism,” the studio told Dezeen.

“[In Russia] we had our own mid-century modern, along with the worldwide flow of this style. It was manifested in thousands of research institutes, the main place of work for many Soviet people, scientists and engineers.” 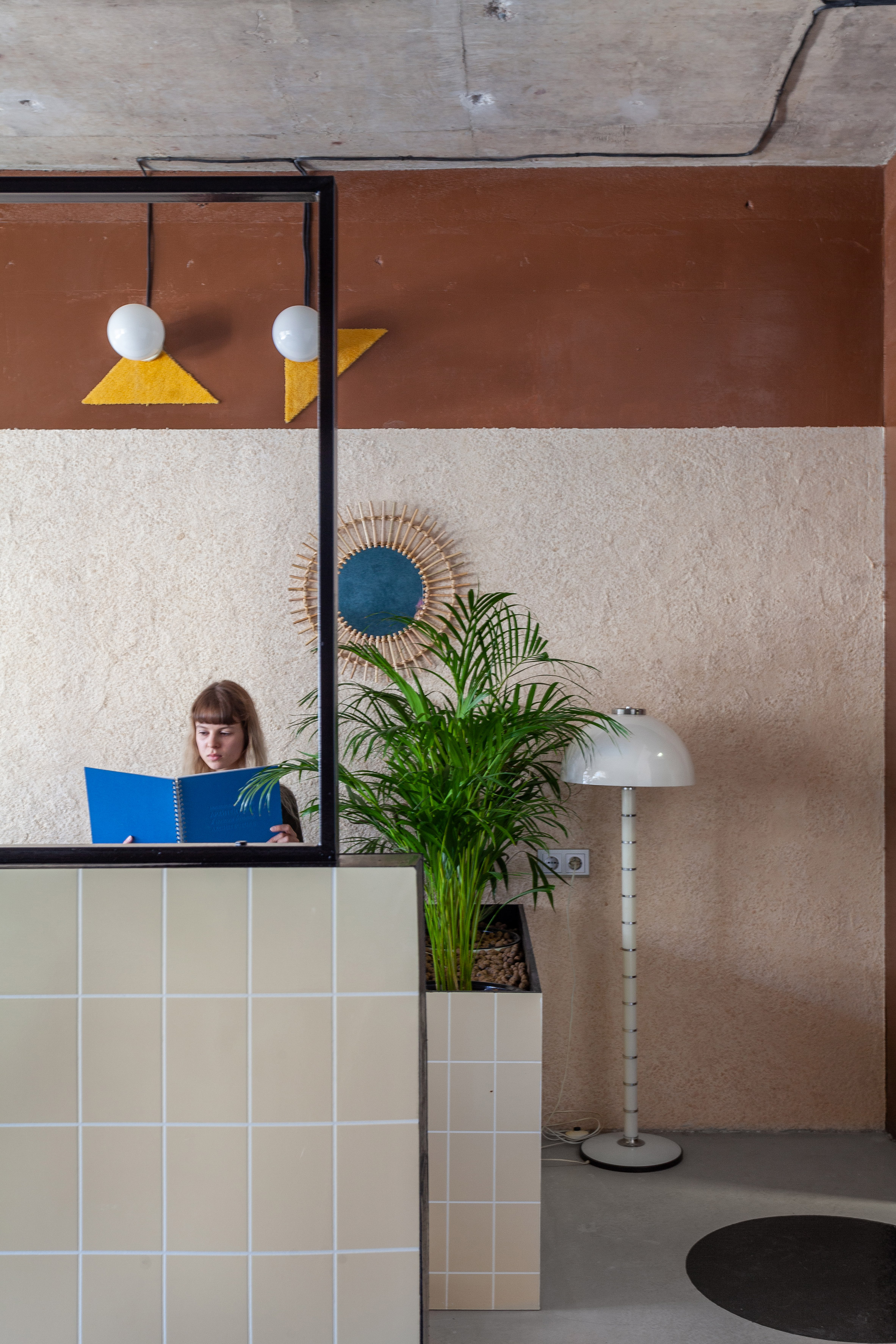 The raised podium and its built-in bench are therefore lined with carpet, while the partition wall and rectangular planter are finished with MDF panels that imitate tiles.

Rectangular steel frames top the partitions to form a visual barrier between the two spaces without blocking out light. 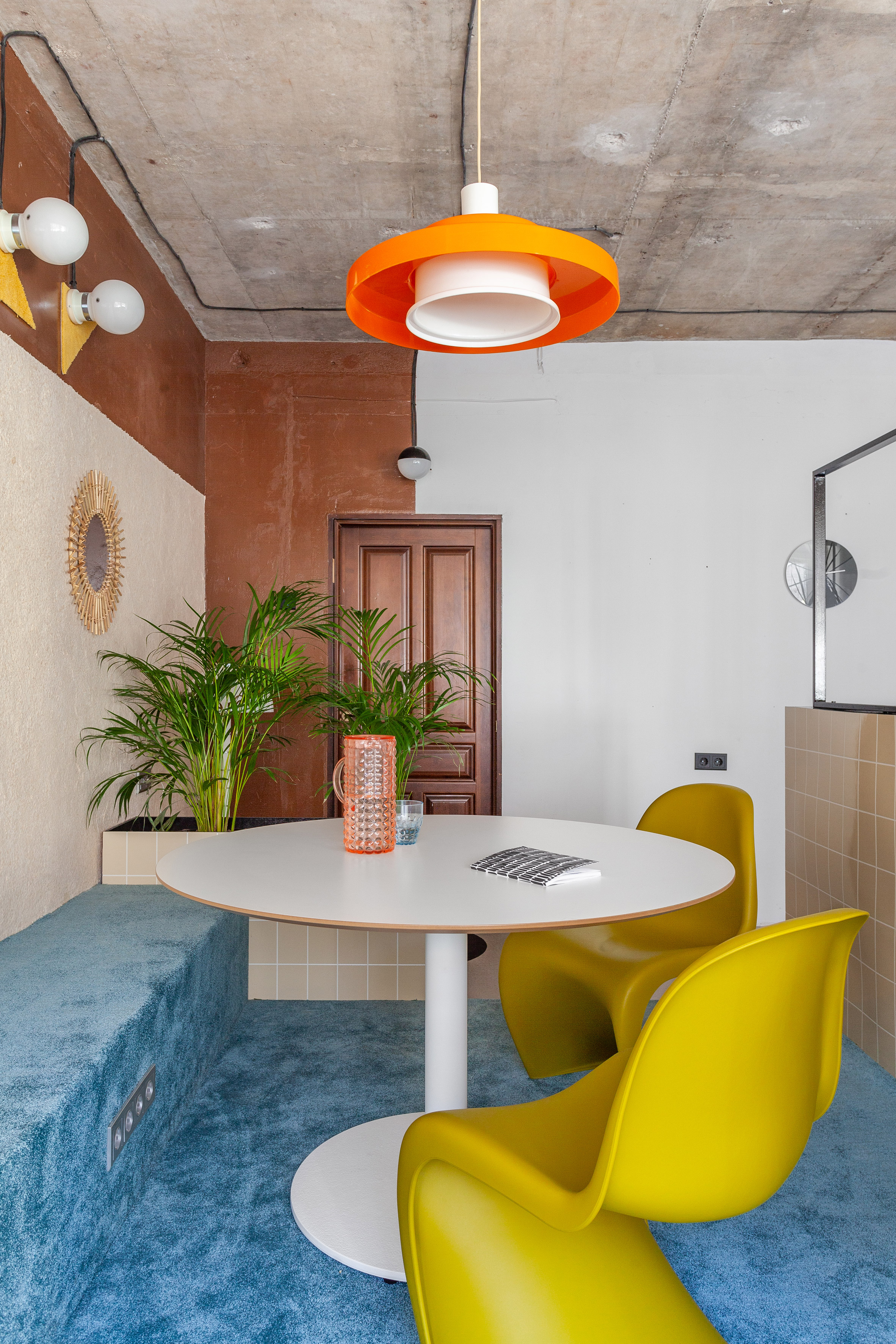 The wall that runs behind the podium is partially clad in textured, oatmeal-coloured panels, with the remaining portion is painted a rich shade of brown, a colour palette the studio thinks is typical of Soviet modernism.

A 1970s Latvian lamp comprised of orange and white rings has been suspended from the ceiling. It complements a set of yellow Panton chairs from Vitra that were originally designed in 1960.

Other furniture pieces include an IKEA table, a vintage floor lamp found in Estonia and an L-shaped white desk. Potted plants have additionally been used to dress the space to absorb noise and clean the air. 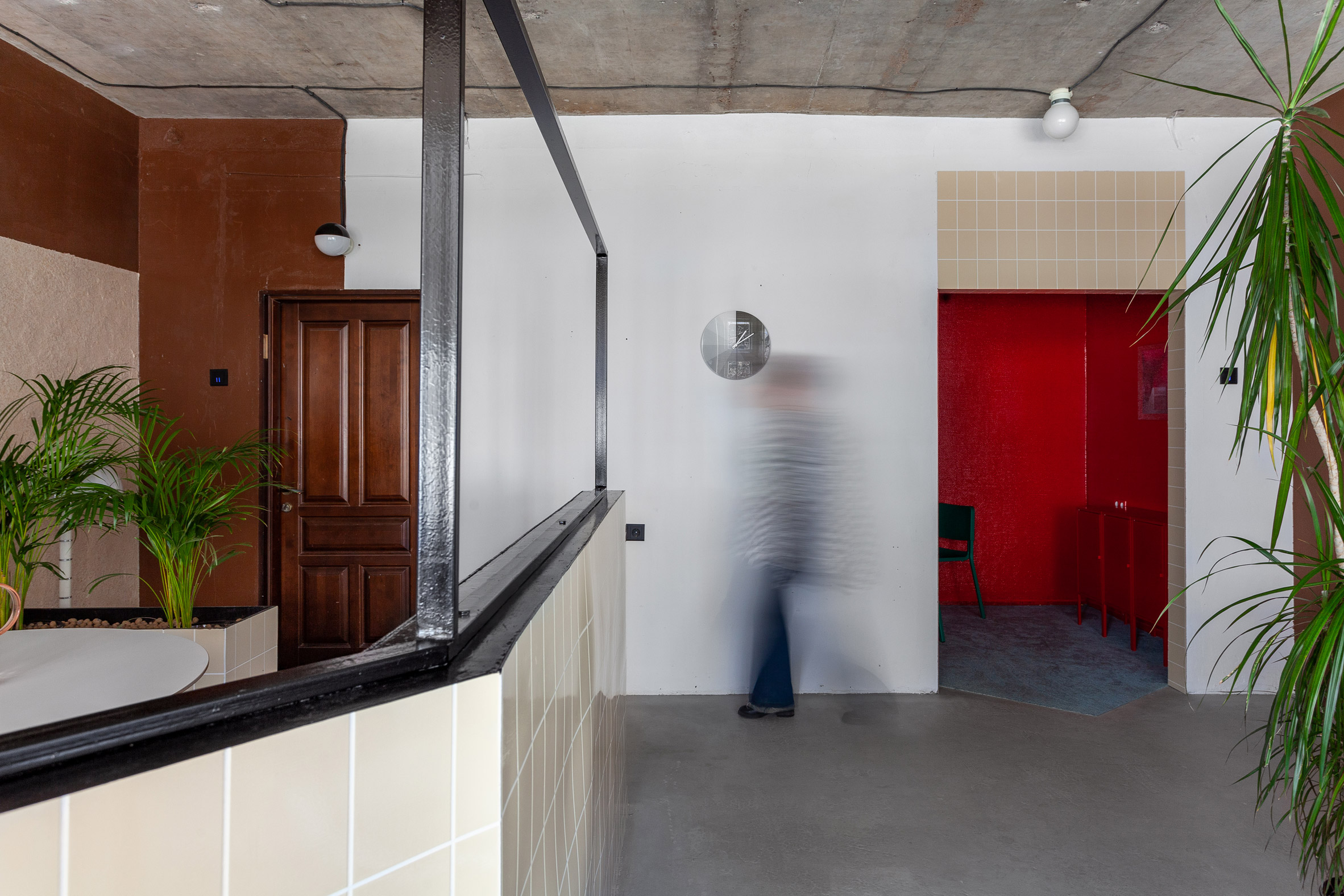 A gypsum-plasterboard ceiling was also removed to reveal concrete panelling underneath, creating an additional 20 centimetres of height.

The concrete floor was then restored and bamboo blinds have been hung in front of the windows to block glare from the sun. 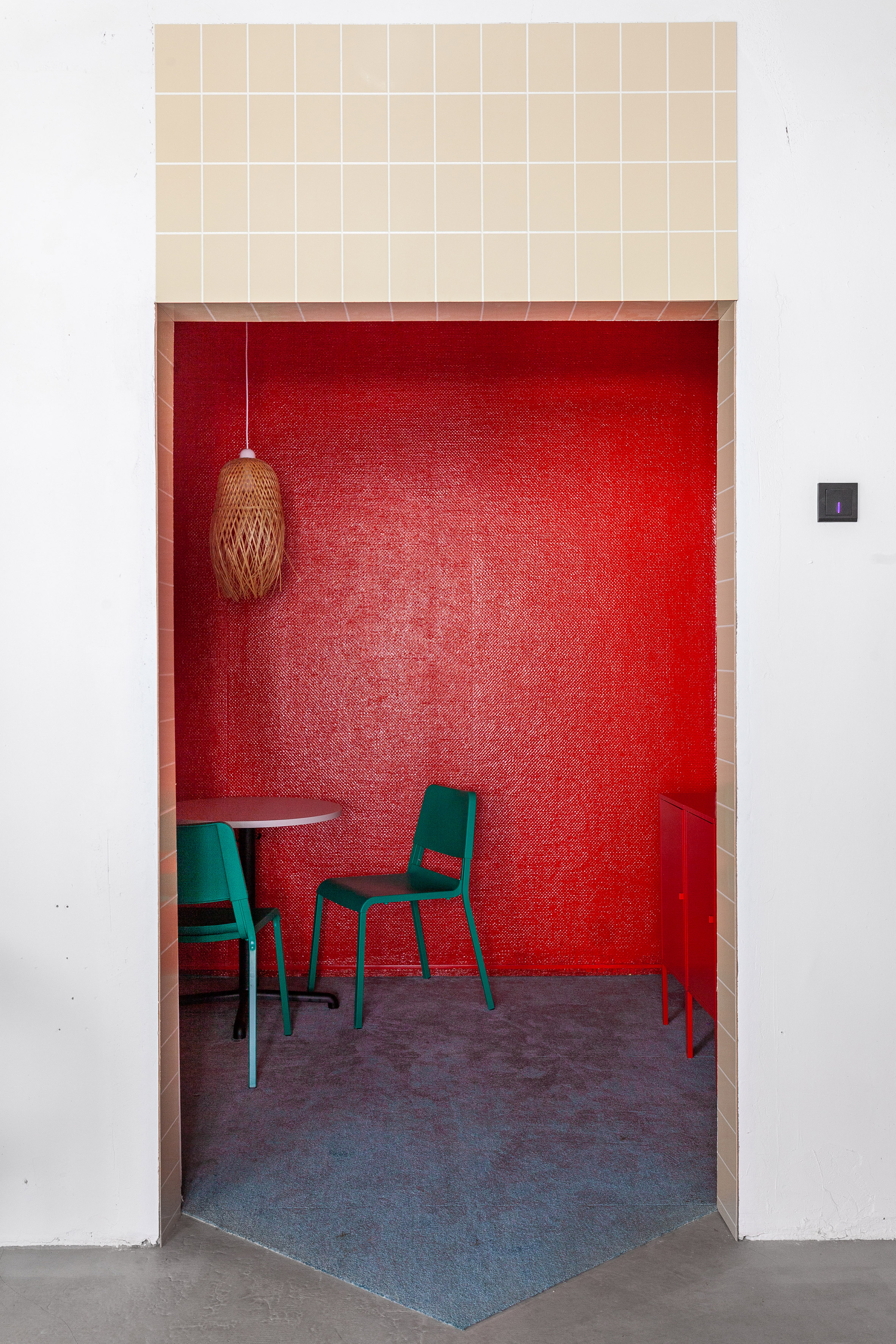 A bold focal point of the office is its all-red kitchen with matching red cabinetry. There is also an artwork made from carpet that’s been mounted on the wall.

The carpet’s outline depicts a character called Cheburashka from a 1966 story by Soviet writer Eduard Uspensky.

“Cheburashka is a fictional creature from a Soviet fairy tale familiar to every Russian person,” explained Dvekati. “It never existed, but unfortunately, many species of animals like Cheburashka remain; only in our imagination and in pictures.” 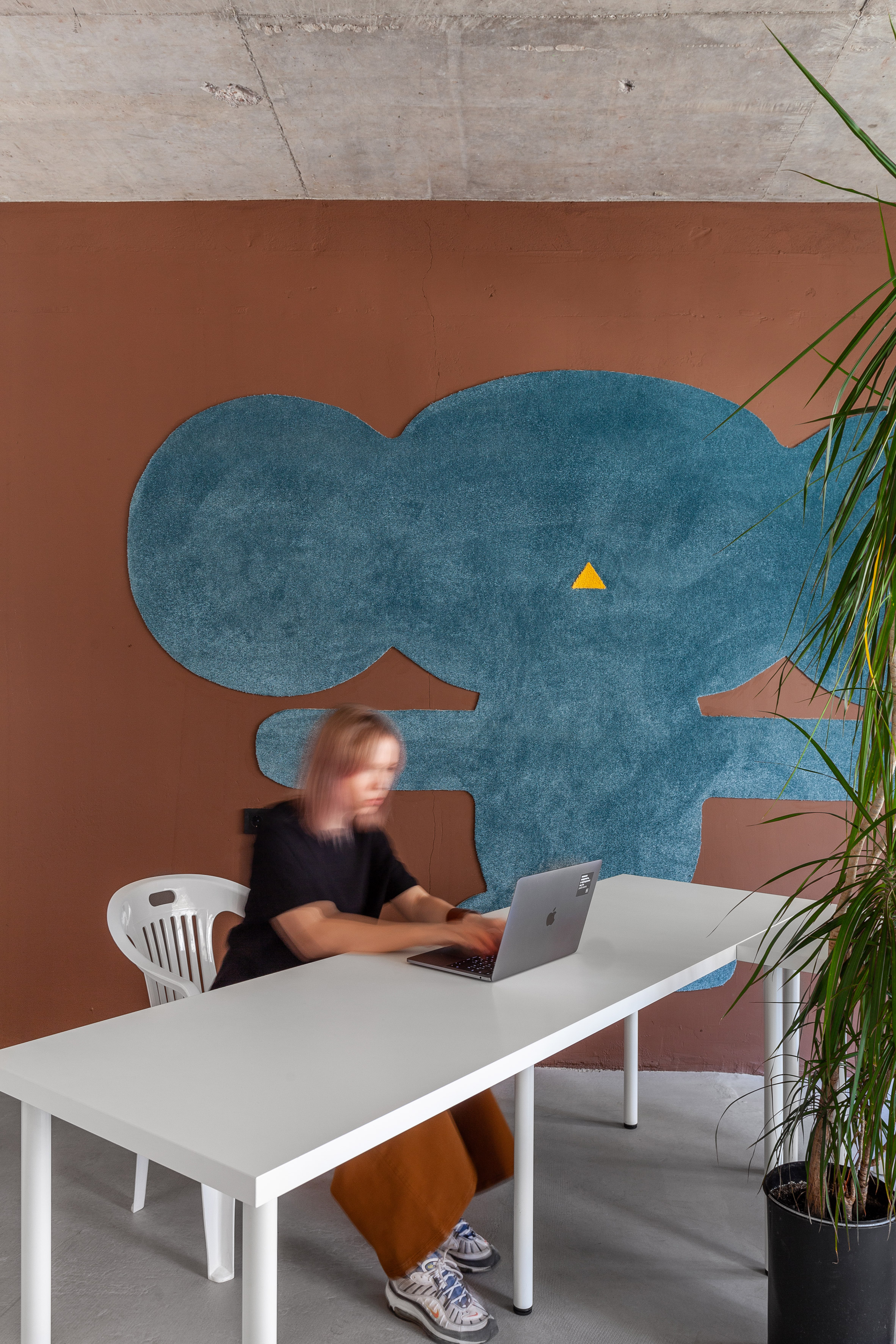 Last year saw Russian practice Alexander Volkov Architects complete another office in Moscow. The workspace is arranged around a handful of tall, brass storage units and a rotunda-like structure that doubles-up as a meeting room.