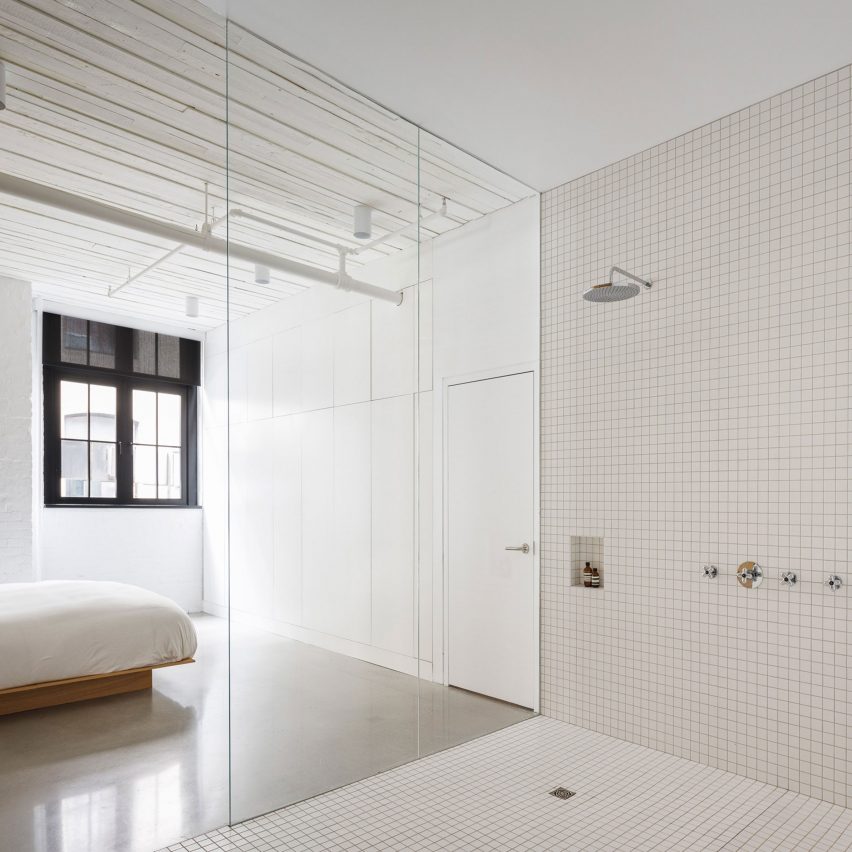 Canadian studio La Firme has turned a former industrial space in a Montreal heritage building into a contemporary home.

The local design practice stripped-back a property in a 1820s building, located in the Old Montreal area, to create a loft-like apartment. 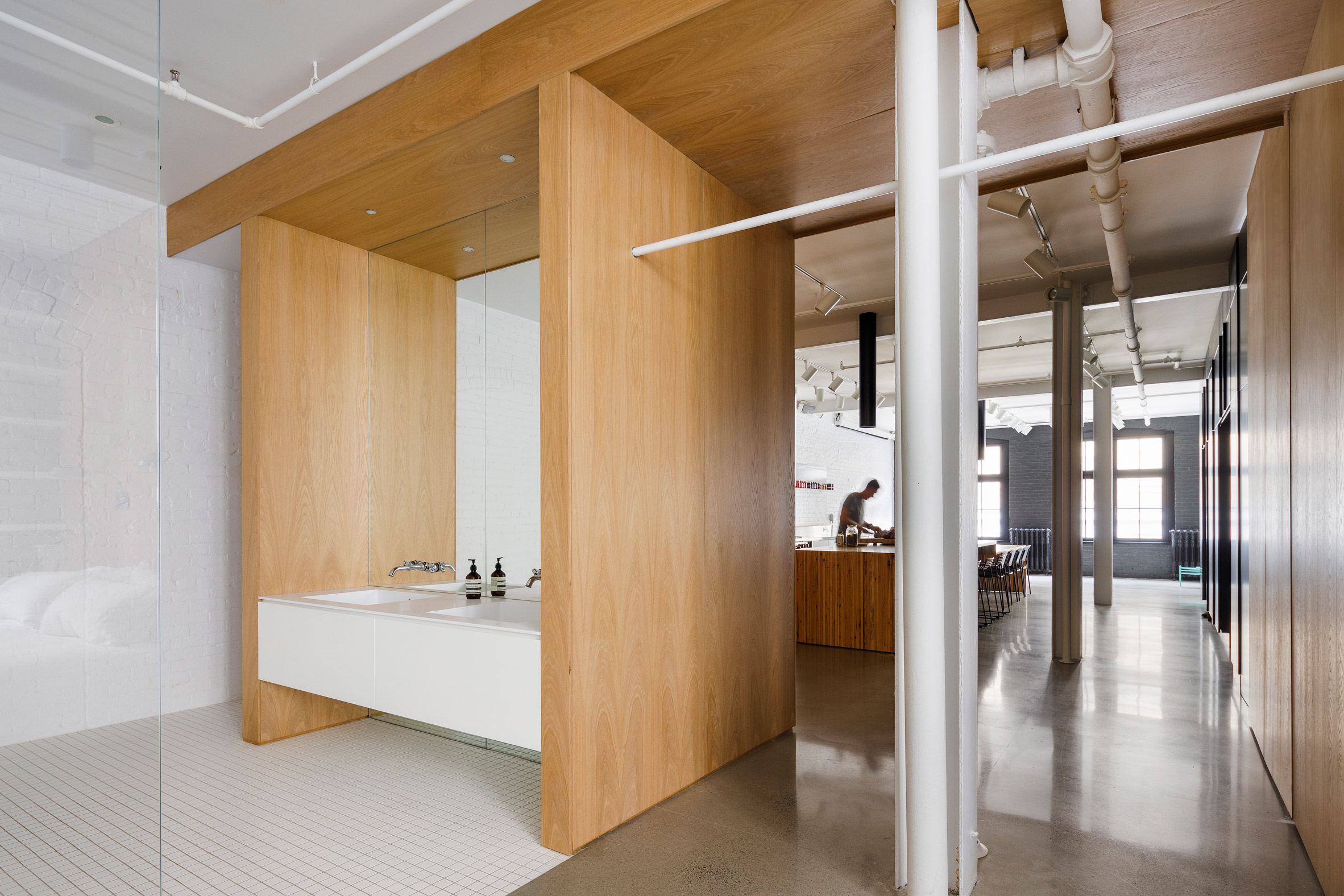 Brick walls, pipes and wooden ceiling beams overhead are left exposed as a reflection of the property’s historic roots.

Other details are black, white and wood surfaces that provide a minimal touch, and heated polished concrete floors. 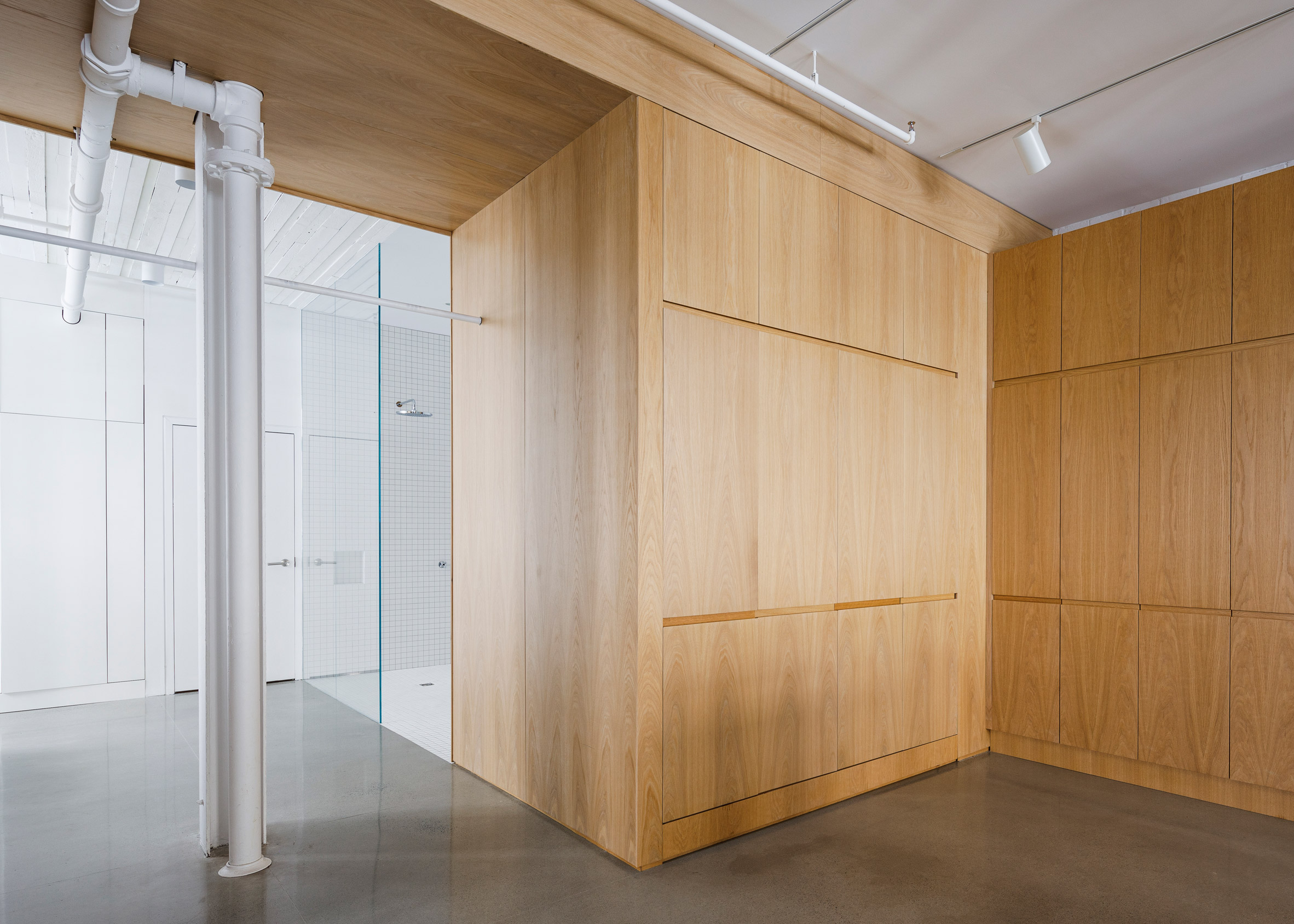 “Because our approach was to preserve the space’s industrial character by exploiting the textures of the original materials, we began by gutting everything,” said La Firme founder Louis Beliveau.

“The result is open and lofty but maintained a sense of privacy.” 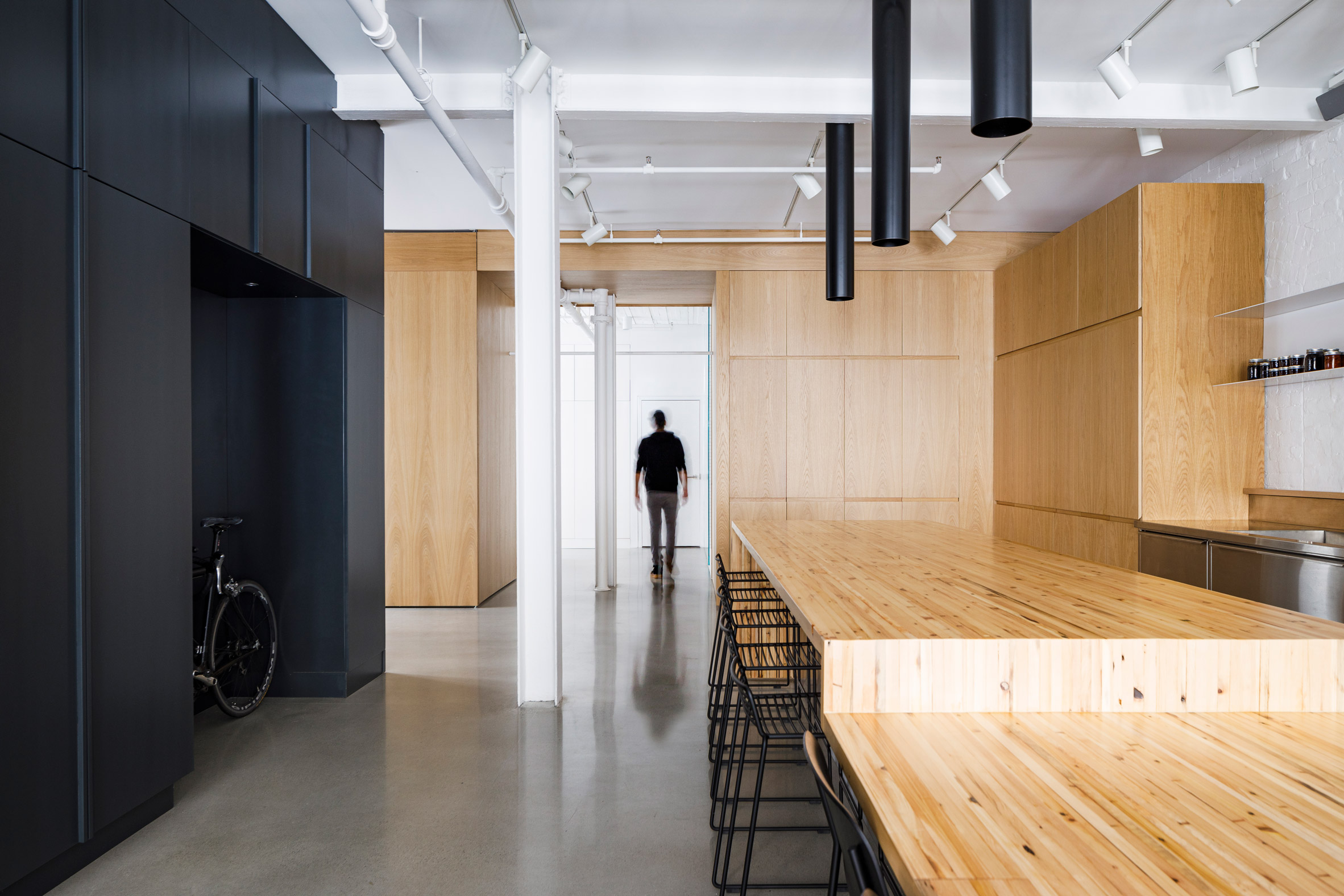 The apartment, called McGill 120, is left with hardly any walls inside in order to ensure that there is plenty of natural light.

Instead, to create areas of privacy the firm inserted a series of floor-to-ceiling cabinets.

The firm designed a monolithic black volume where the entrance is located, outfitted with bookshelves and closets.

Another black volume acts as a barrier to the master bedroom, and has a fold-down bed so it can easily transition between an office and a guest bedroom. 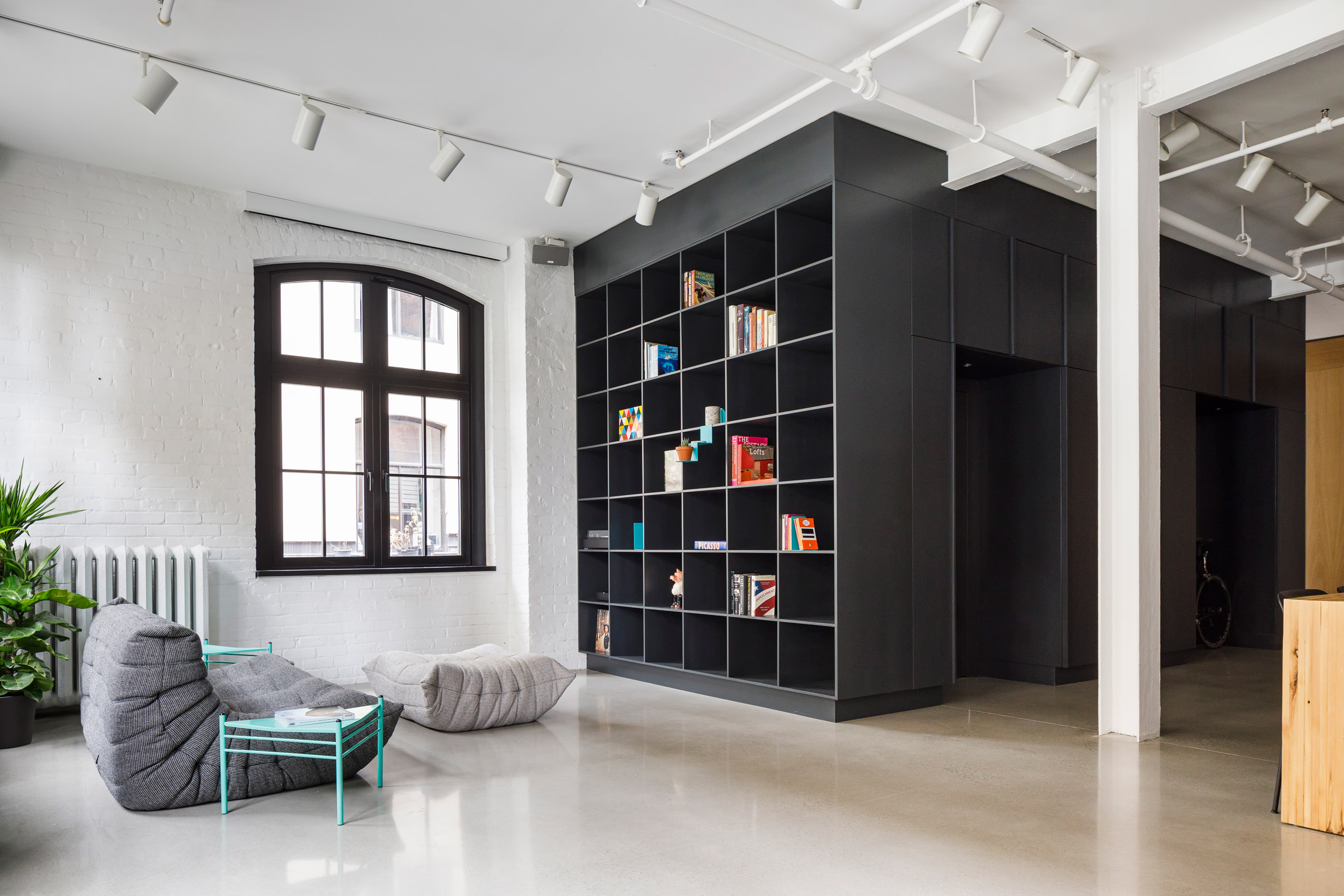 “Our floorplan optimises available light sources, and the layout of the master bedroom and the office/guest room with murphy bed and bathroom exploits this layout approach,” Beliveau said.

A feature of the home is a walk-in shower that the firm designed to be much bigger than normal. Rather than a door, it has a glass wall that provides views into the master bedroom adjacent. 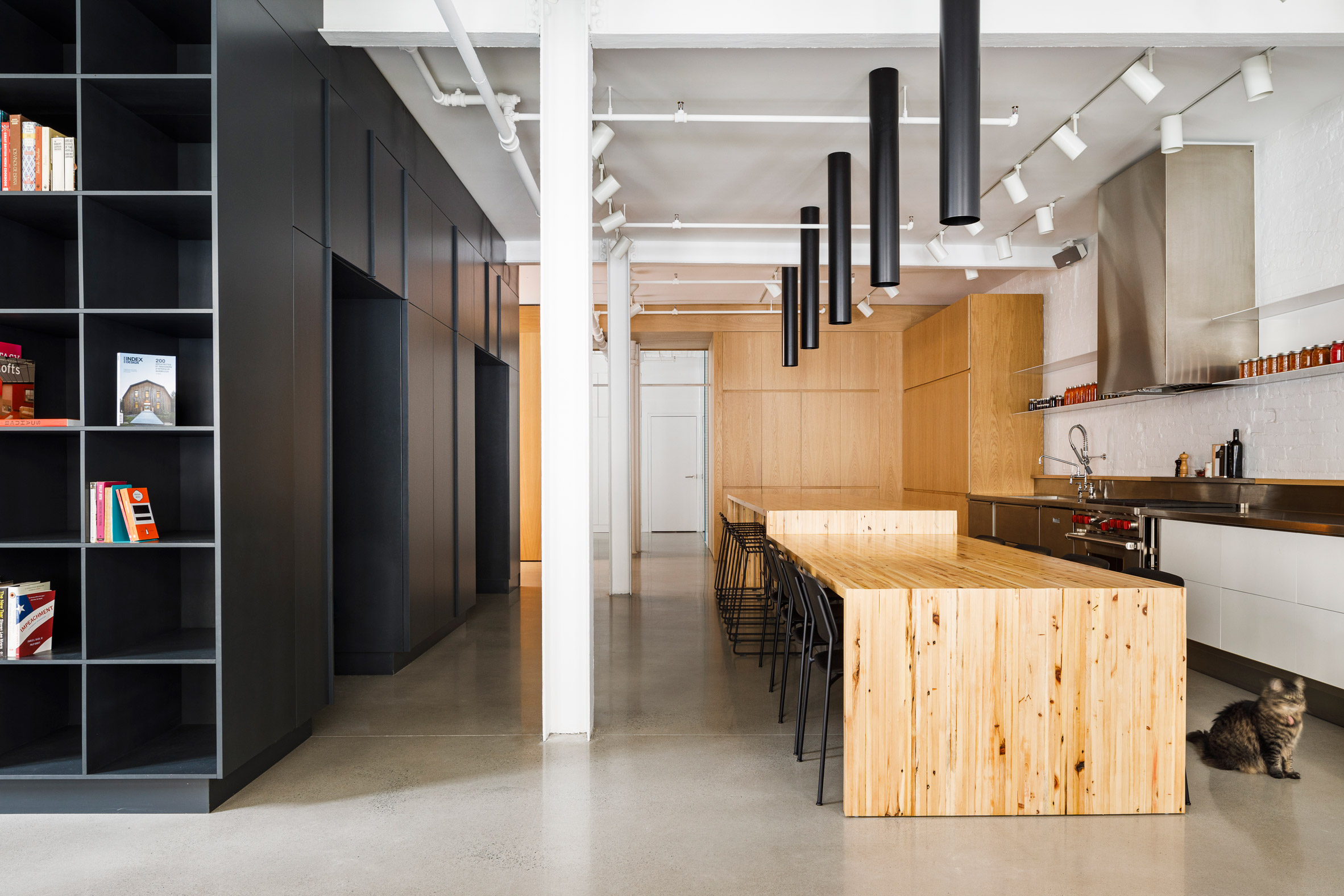 “The large, open bathroom with its shower zone big enough for two and integrated into the master bedroom extends the lofty feel of the apartment,” said Beliveau.

McGill 120 was designed to include a spacious kitchen for its owner who loves to cook and host people. A long island has two different heights and black Hay metal bar stools. 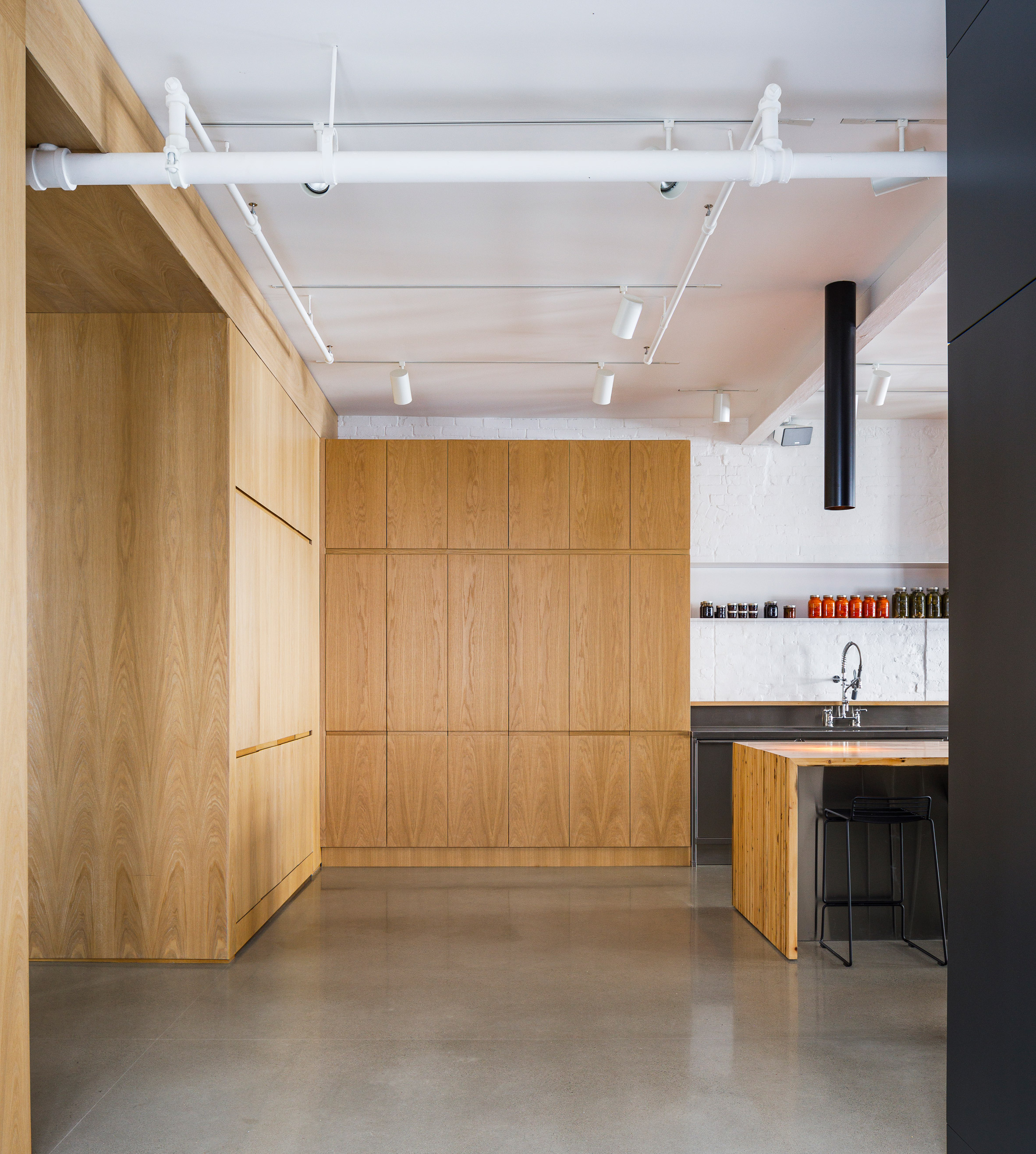 “The kitchen was designed for entertaining, with a 20-foot (six-metre) island topped with wood reclaimed from the floor,” said Beliveau.

Rounding out the home is a living room with large, arched windows, and Ligne Roset Togo sofas.

McGill 120 is complete with an additional apartment in the rear of the property, which can be accessed via a door next to the bathroom or from a separate stairwell in the building. Together the units take up an entire floor. 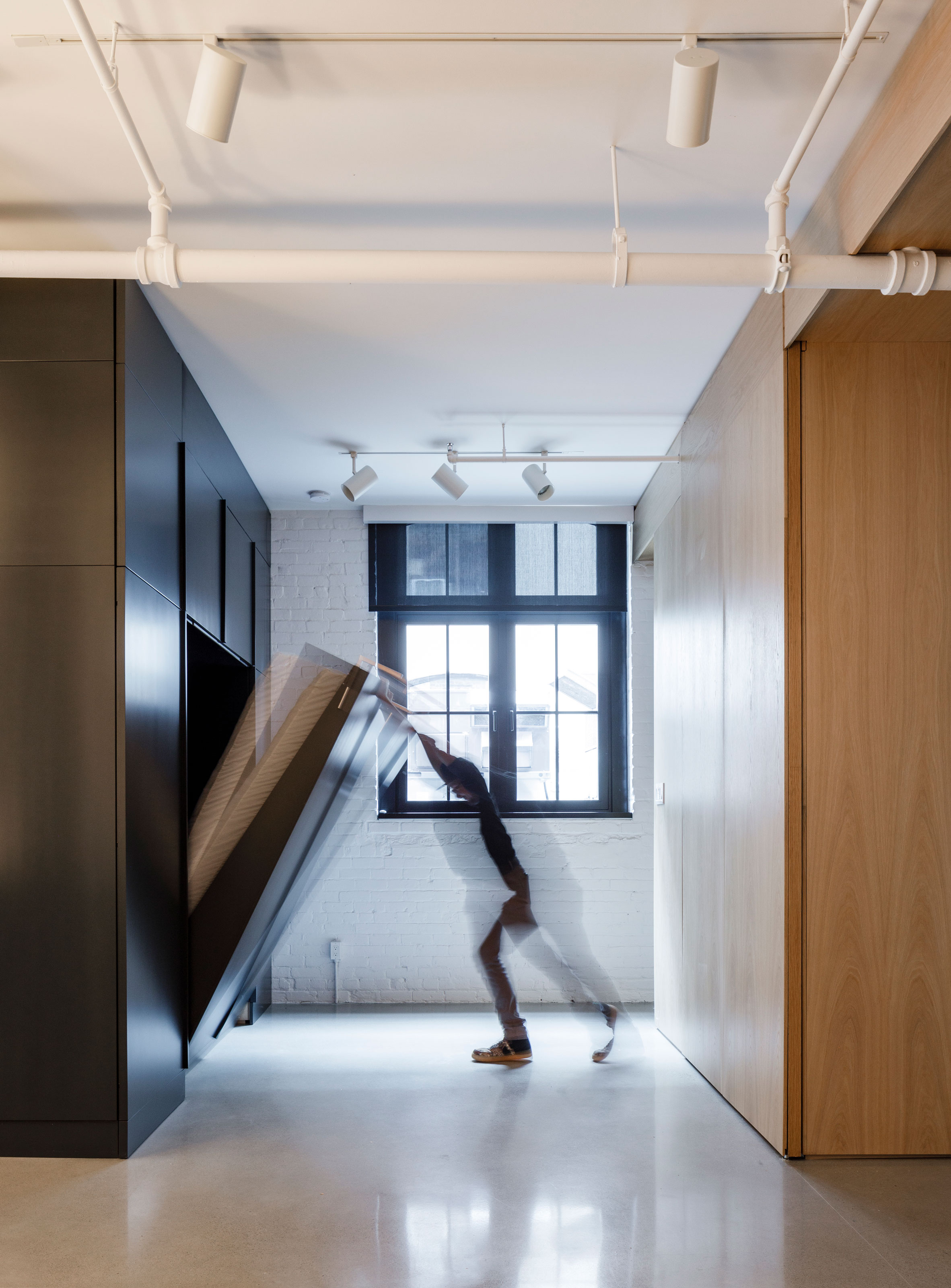 Another apartment by the studio in the city, McGill 38, was among the interiors projects longlisted for Dezeen Awards. La Firme has also designed a country house from an abandoned shed in Mansonville, Quebec.

Photography is by Ulysse Lemerise.