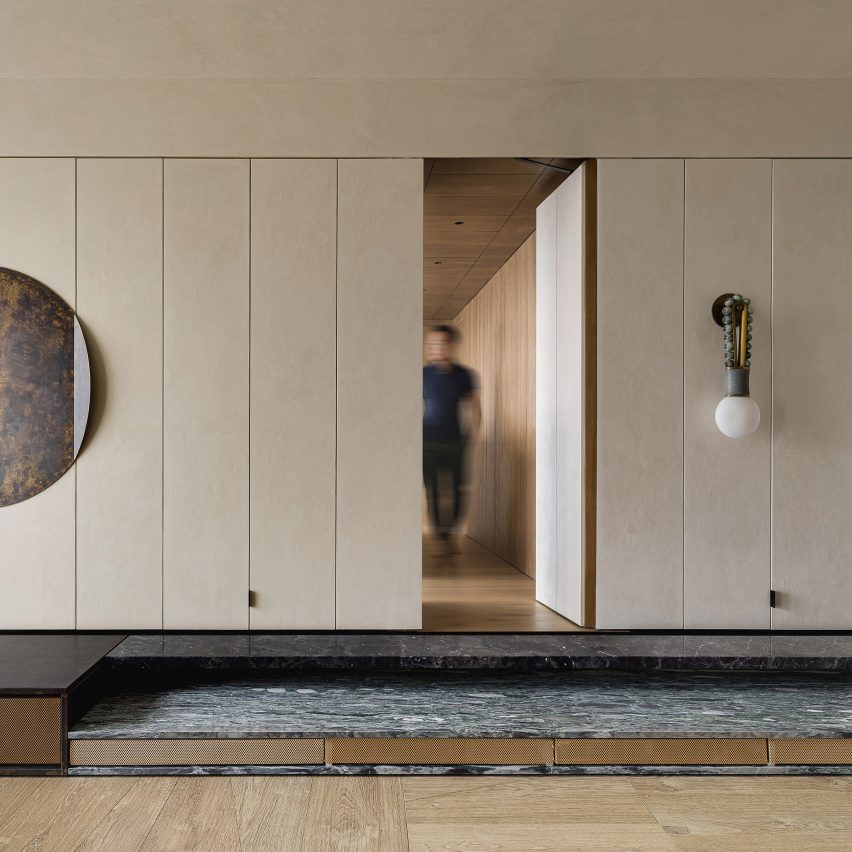 NC Design & Architecture has applied an array of naturally flawed materials throughout this Hong Kong apartment, which has been designed in accordance with the Japanese philosophy of wabi-sabi.

The Hong Kong-based studio decided to look to wabi-sabi – an ancient Japanese philosophy that accepts transience and imperfection, and celebrates natural objects and processes.

This has been translated to the apartment through the use of natural materials like wood and marble, as well as “imperfect” finishes like oxidised bronze and textured plaster.

“The residence inspires to accept the beauty of imperfection and incompleteness, setting the residents free from the everyday,” said the studio’s founder, Nelson Chow.

“On a psychological level, the design should make the occupants feel relaxed, like a little oasis away from the hustle and bustle of Hong Kong.”

The 157 square-metre apartment is divided into three main sections – a living room, bedroom and bathroom – separated by darkened passages. A kitchen, powder room and study are located at the back of the floor plan.

The apartment is entered through a dark vestibule clad in timber. This leads immediately to a living room that’s been conceived as a “sculpture garden”.

Geometric fragments of marble and oxidised metal have been integrated into its wooden floor, nodding to the materiality of traditional busts or statuettes.

Storage units are concealed behind the room’s walls, while the television and a doorway are hidden by plaster panels. An oxidised bronze plate that has been affixed to the panels doubles up as a handle that opens the TV cabinet. 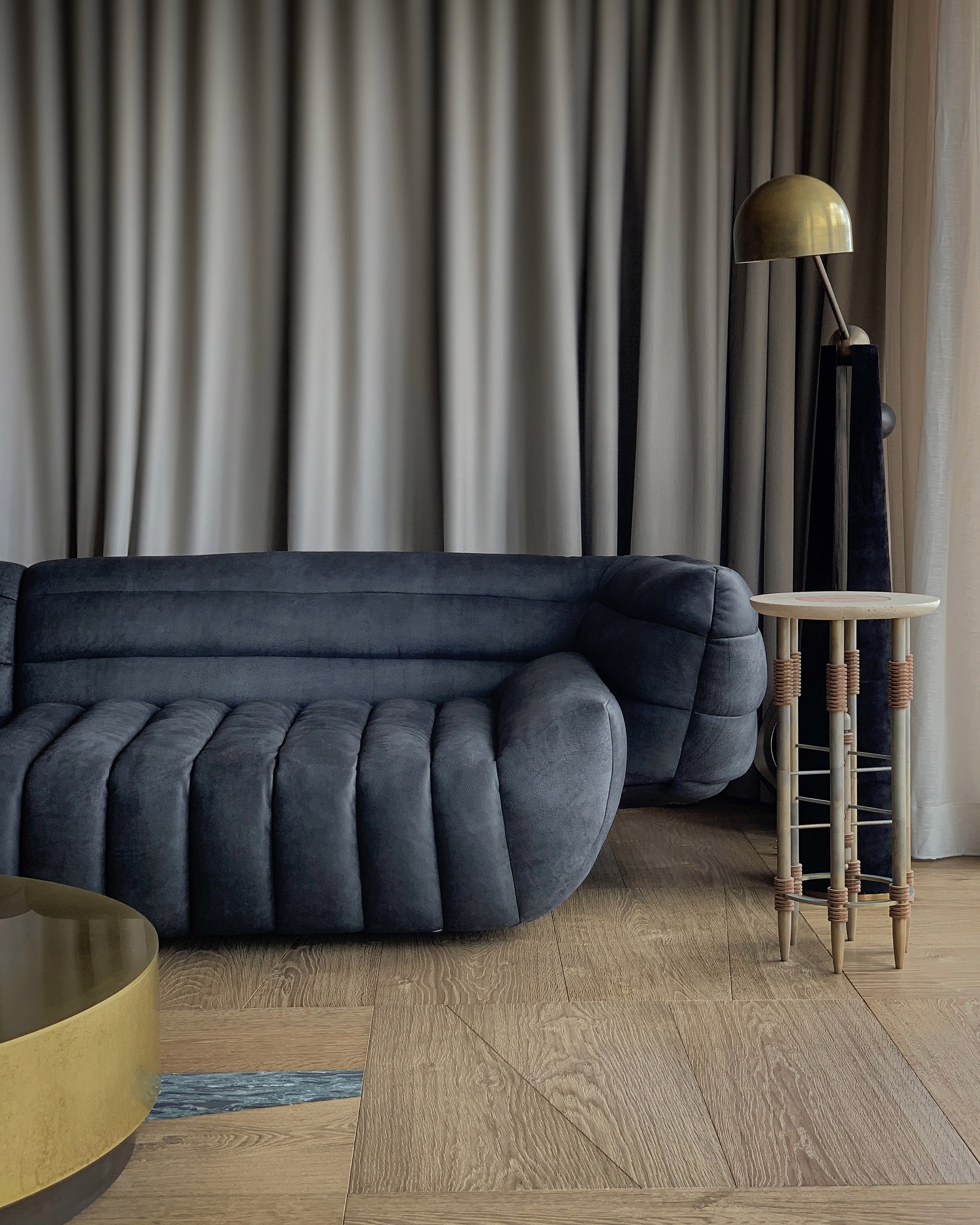 Chow said that the fixtures and furniture that populate the living room were carefully chosen to echo the various elements of the architecture.

For example, the rounded form of the wall sconce complements the metal plate and the marble fragments on the floor. Oxidised bronze was also used to make a custom pendant light that hangs over the kitchen table.

“Everything should be seamlessly integrated as part of the architecture and not exist as separate scattered objects,”  explained Chow. 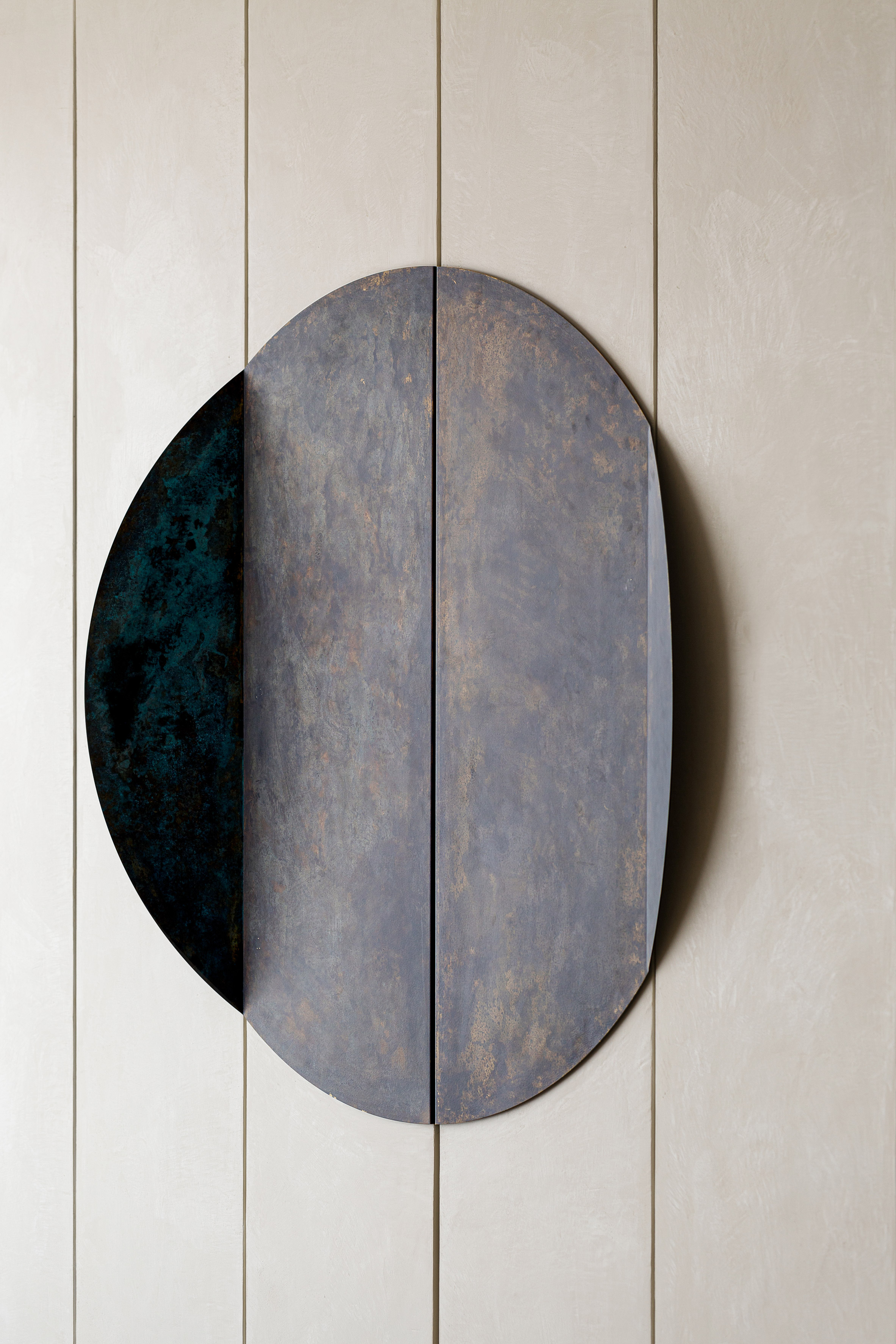 A couple of marble slabs that run the length of the room’s plaster wall conceal a sound system.

The slabs also function as steps that lead up to an elevated, timber-clad passageway inspired by a traditional genkan – a lowered area at the entrance of Japanese homes where inhabitants remove their shoes.

“A genkan is an entryway which separates the outside world,” explained Chow. “It affects a psychological transition to the bedroom.” Located off the hallway is the master bedroom, which has been designed as a “sanctuary” with beige textured walls, a leather-upholstered bed frame and dark-timber cabinetry.

The side tables and pendants are made from marble blocks and a large window fills the room with natural light. At the end of the elevated walkway is another hidden door that grants access to the dressing room and bathroom, which the studio refers to as an “altar”.

A bathtub and elliptical bronze basin have been incorporated into a marble counter. It’s topped by a series of arched mirrors, echoing the vaulted niche in a church that typically accommodates an altar. 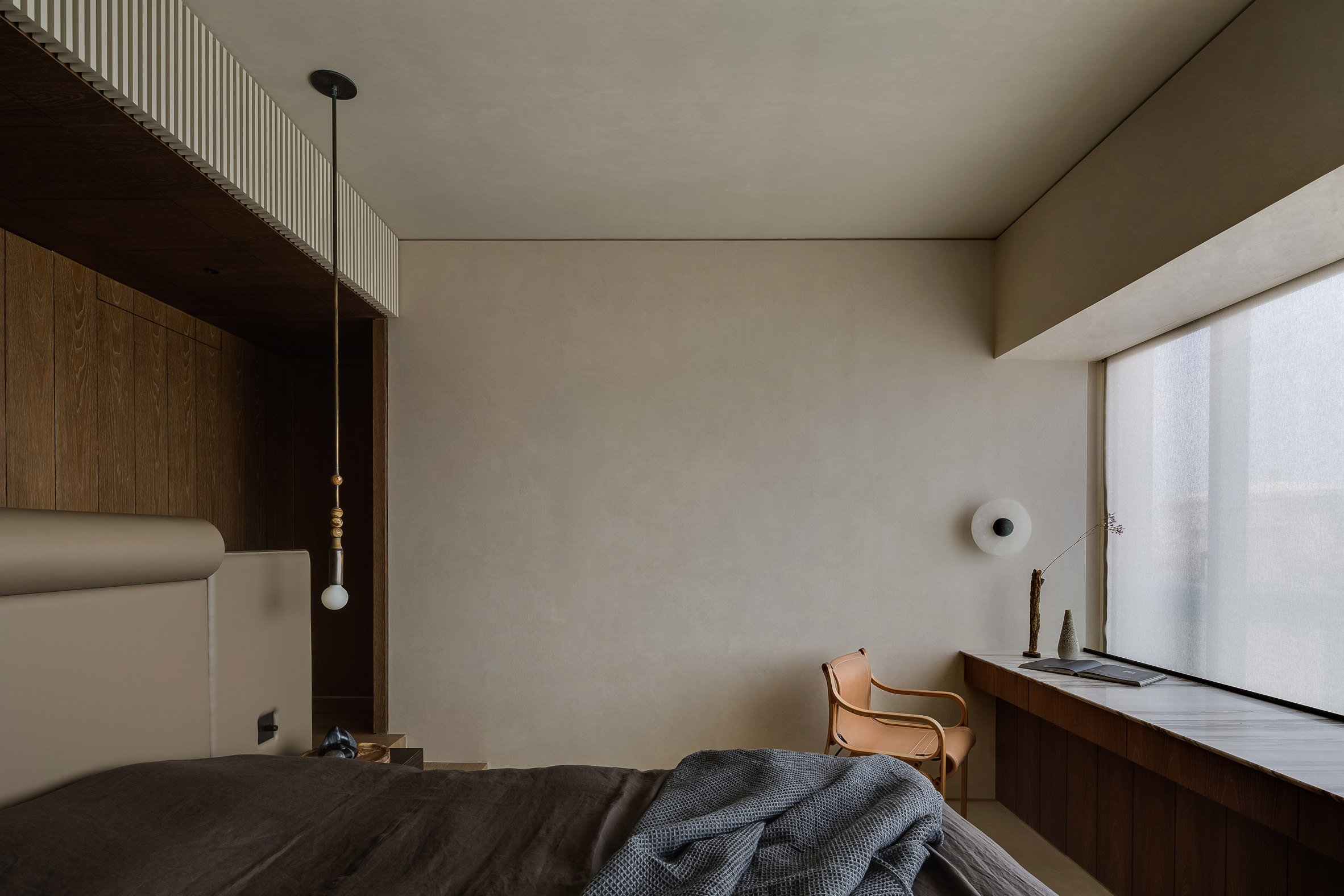 All of the bathroom’s utility details are hidden inside a pair of marble-clad columns. The space has also been finished with a hand-brushed plaster floor that’s designed to soothe bare feet and evoke a sense of serenity.

“The dressing room merges with the bathroom, providing an uninterrupted, fluid ambience and making it easy to wind down after a busy day and prepare for a good night’s sleep,” added Chow.

Other projects by the studio include a restaurant hidden behind a grocery stall and a speakeasy disguised as a stamp shop.

Photography is by Harold De Puymorin.