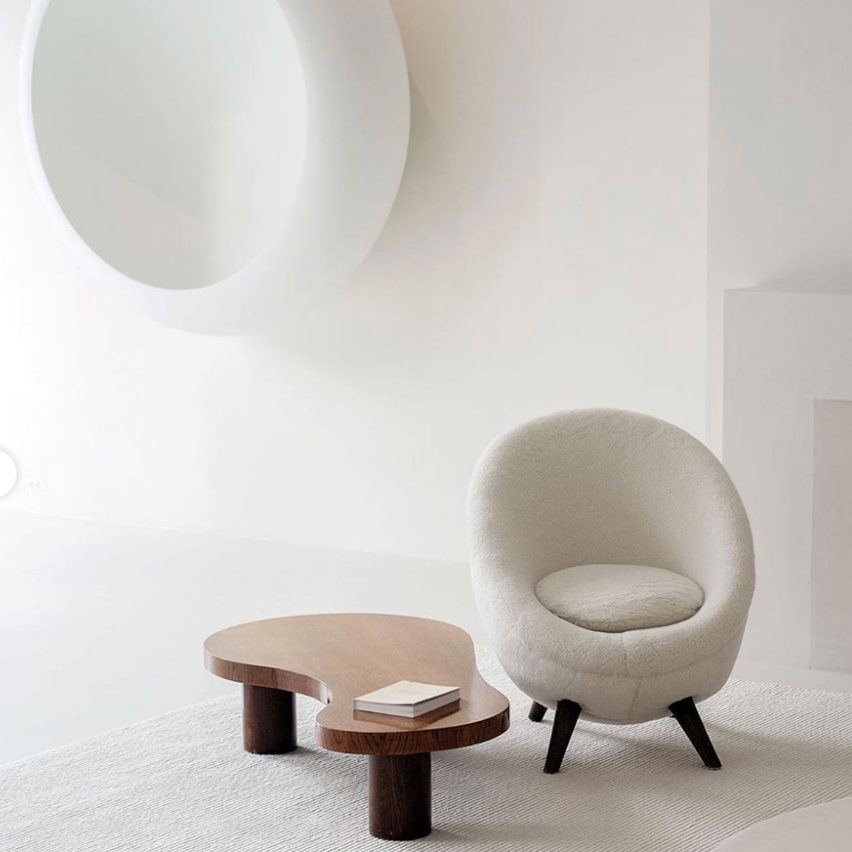 Kim Kardashian has revealed a glimpse of the “minimal style” Calabasas house that Axel Vervoordt and Vincent Van Duysen designed for the reality television star and her rapper husband Kanye West.

Kardashian posted several images of her family’s Californian home on Instagram to announce that the property will be featured on the cover of Architectural Digest – something Kardashian said she has “always dreamed of”.

Axel Vervoordt‘s interior design practice designed the overhaul of the property, with a contribution from Belgian architect Vincent Van Duysen, for the celebrity couple.

The interiors, described by Kardashian as a “minimal style”, are predominantly decorated with a pale palette. They include a hallway accented by a curved staircase balustrade and a circular, wooden table.

A key feature of the property, as revealed in the photos, is a grand hallway topped with arched ceilings and lined with windows.

Other shots capture a corner nook decorated with a rustic, wooden table and ornaments, and a slender dining table, which is flanked by a cushioned bench one side, and rattan wood chairs on the other.

There is also space with creamy walls matched by a large light fixture, a textured rug and a curved chair, which is set atop dark, wooden legs. Additional furnishings include a curvilinear wood table.

The photoset also captures the property’s expansive pool and an all-pink bedroom designed for the eldest of Kardashian and West’s four children, North West. The bed is backed by a butterfly-shaped headboard and flanked on either side by two mirrors.

Glimpses of the property have already been revealed in the latest season of Kardashian’s reality show, Keeping Up With the Kardashians. Other details include a large, circular dining table and an outdoor terrace.

This is not the firm time that the Kardashian-West’s have come into contact with the world of architecture.

In one episode of the’s Kardashian hit show, the family emerged as unlikely fans of Modernist architecture, when Kardashian’s mother Kris Jenner revealed that she was reading a book about “Le Courvoisier, which is an architect”.

Recent years, however, have seen West make a more ambitious venture into the architecture scene. During a visit to Harvard Graduate School of Design in 2013, he told students that “the world can be saved through design”.

West has since launched an architecture arm to his Yeezy fashion label and revealed plans to create Star Wars-themed housing for the homeless.

Last year, he built prototypes of the affordable domed housing on his Calabasas property but these were demolished shortly afterward following reports that he had failed to secure a building permit.