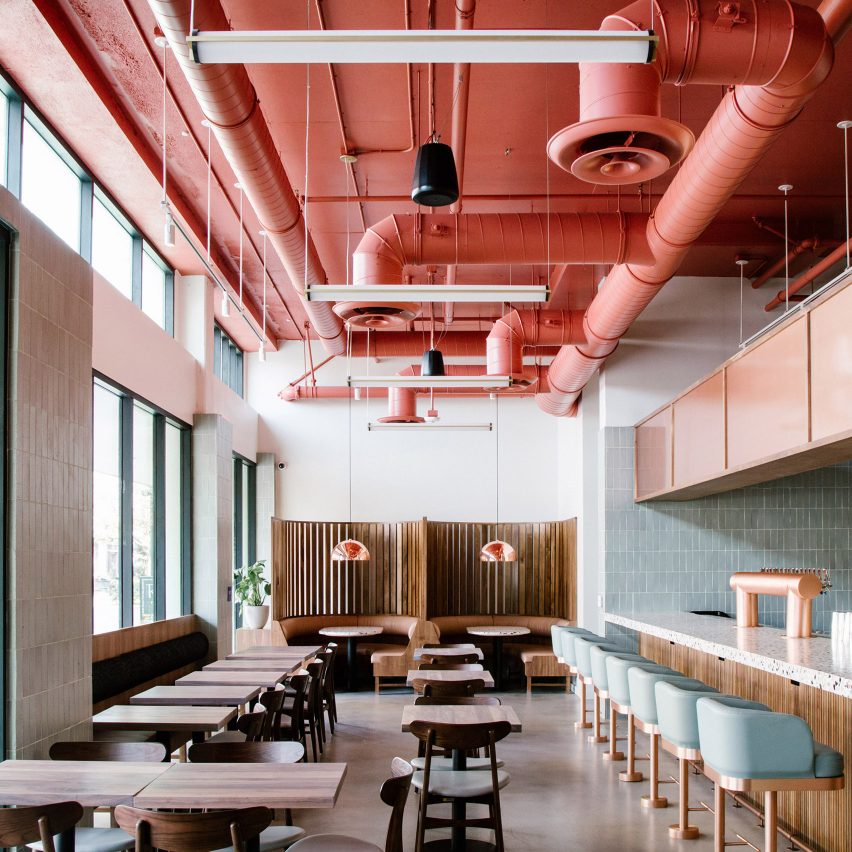 Earthy colours such as muted turquoise, sage green and brick red feature in this gastropub in California that was designed by Project M Plus to “stimulate the appetite and the senses”. 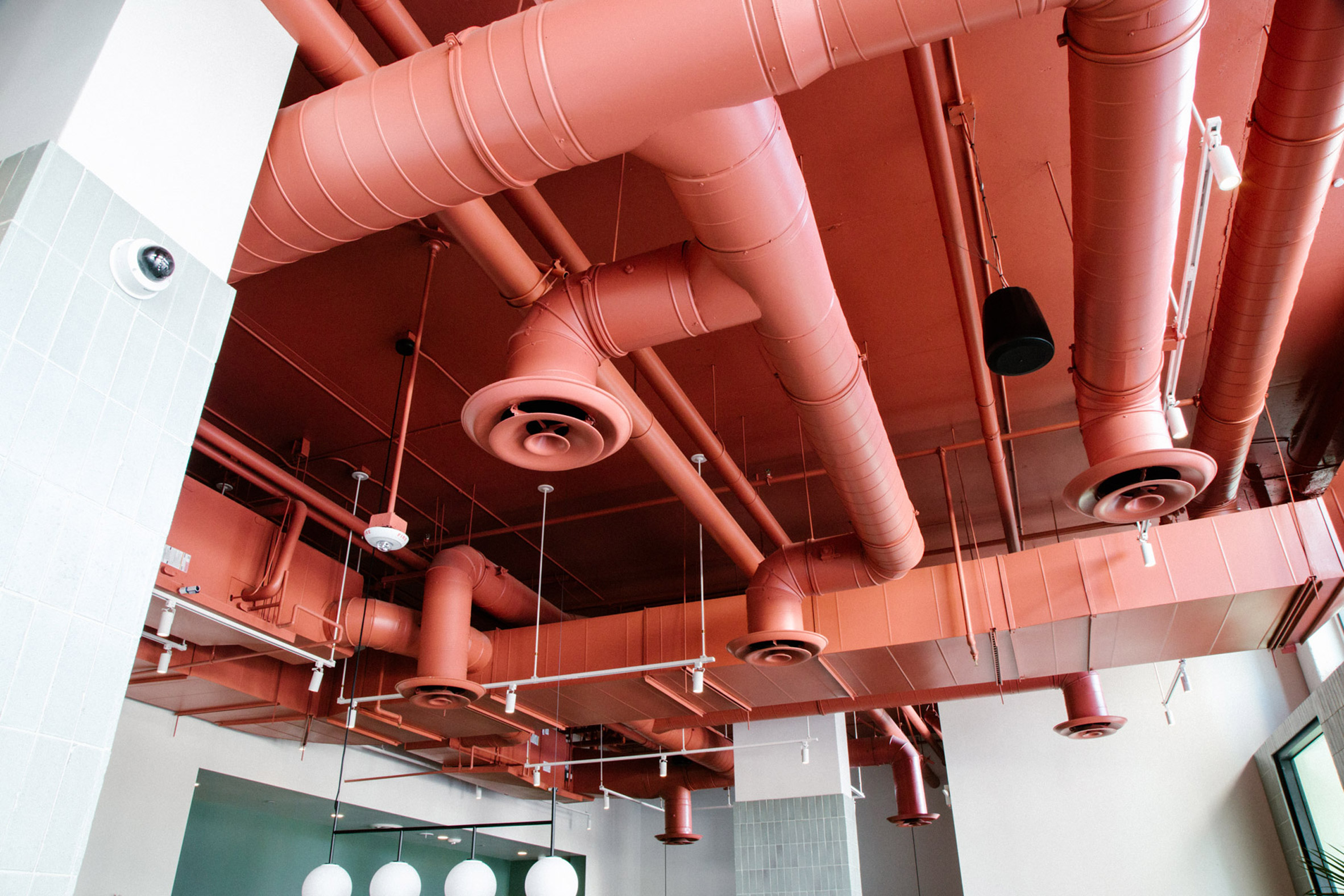 The Salted Pig is part of an urban residential complex in Riverside, a city just outside of Los Angeles in the Inland Empire region. This is a new home for the restaurant, which first opened in 2011. It formerly was located in a small building several blocks away, which Project M Plus described as having a “rustic public house” atmosphere.

The owner brought in the multidisciplinary LA studio to create a different look and feel for the new location. The firm’s founders, McShane and Cleo Murnane, “knew that a refreshed, playful design for the restaurant was needed to elevate the brand and charm their loyal customers”. 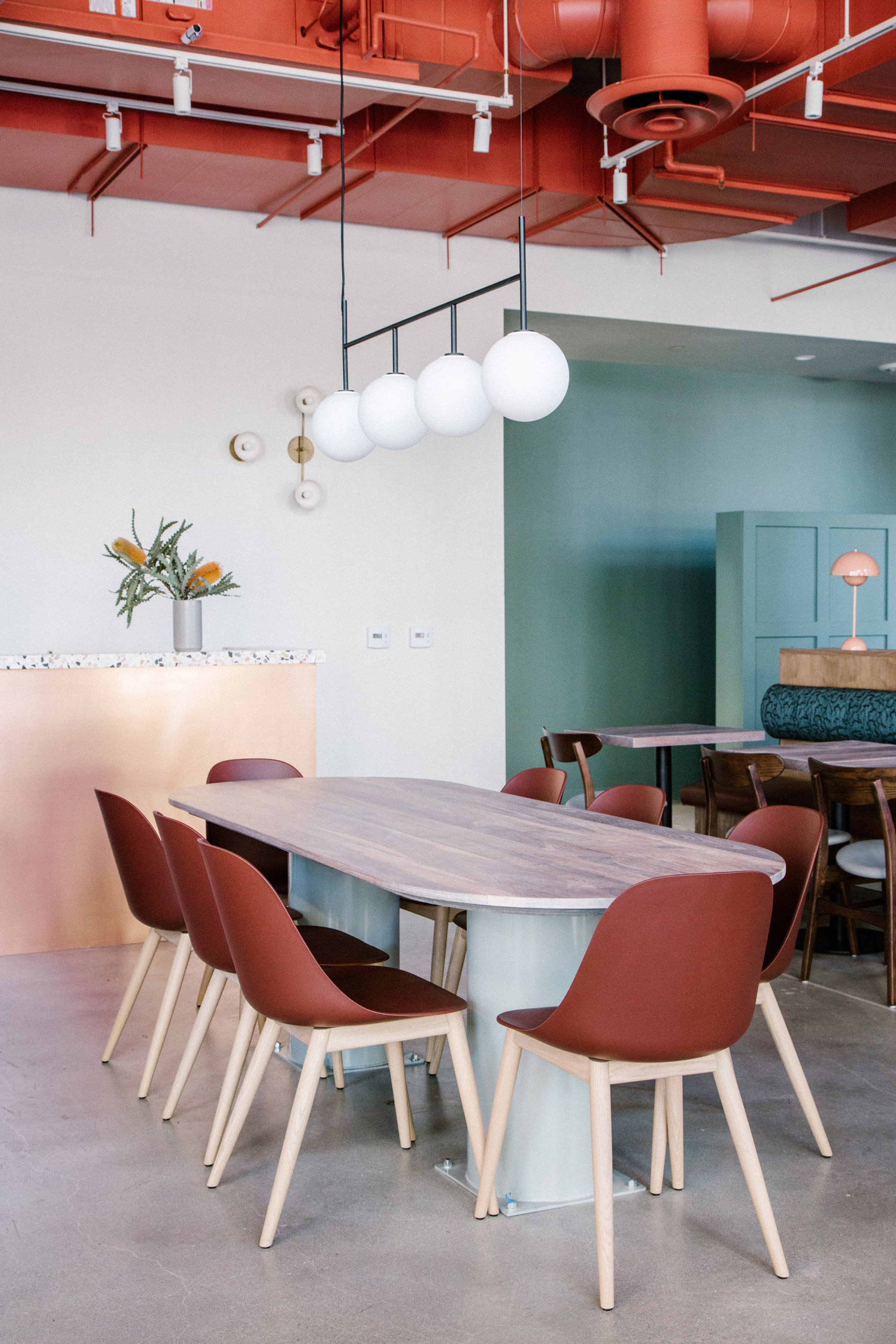 Encompassing 3,400 square feet (316 square metres), the eatery sits at the base of a multi-storey apartment building. The building’s exterior is accented with desert hues, such as tan and sage green – a colour palette that informed the restaurant’s interior design.

“We really wanted to bring the natural beauty of the surrounding environment inside, where we could cultivate a sense of place and cosiness,” said Cleo Murnane in a statement, adding that “warm tones stimulate the appetite and the senses”.

Visitors step into an airy space that comprises a dining room and bar area. Numerous windows usher in daylight while also enabling passers-by to catch a glimpse of the interior. 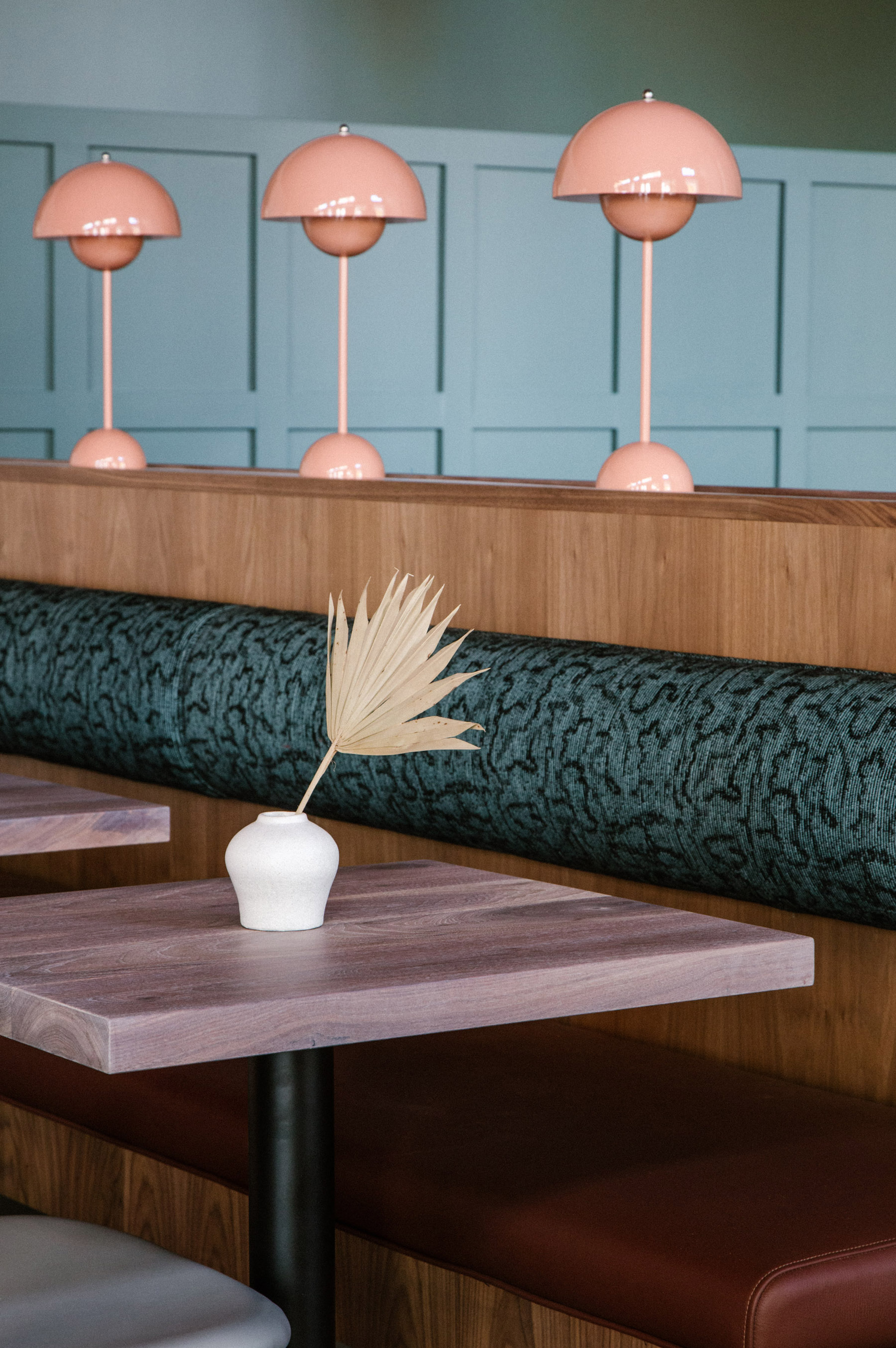 The ceiling is painted a brick red, offering a pleasant contrast to walls that are rendered in white or muted turquoise. In select areas, walls and columns are covered with grey-green tiles. 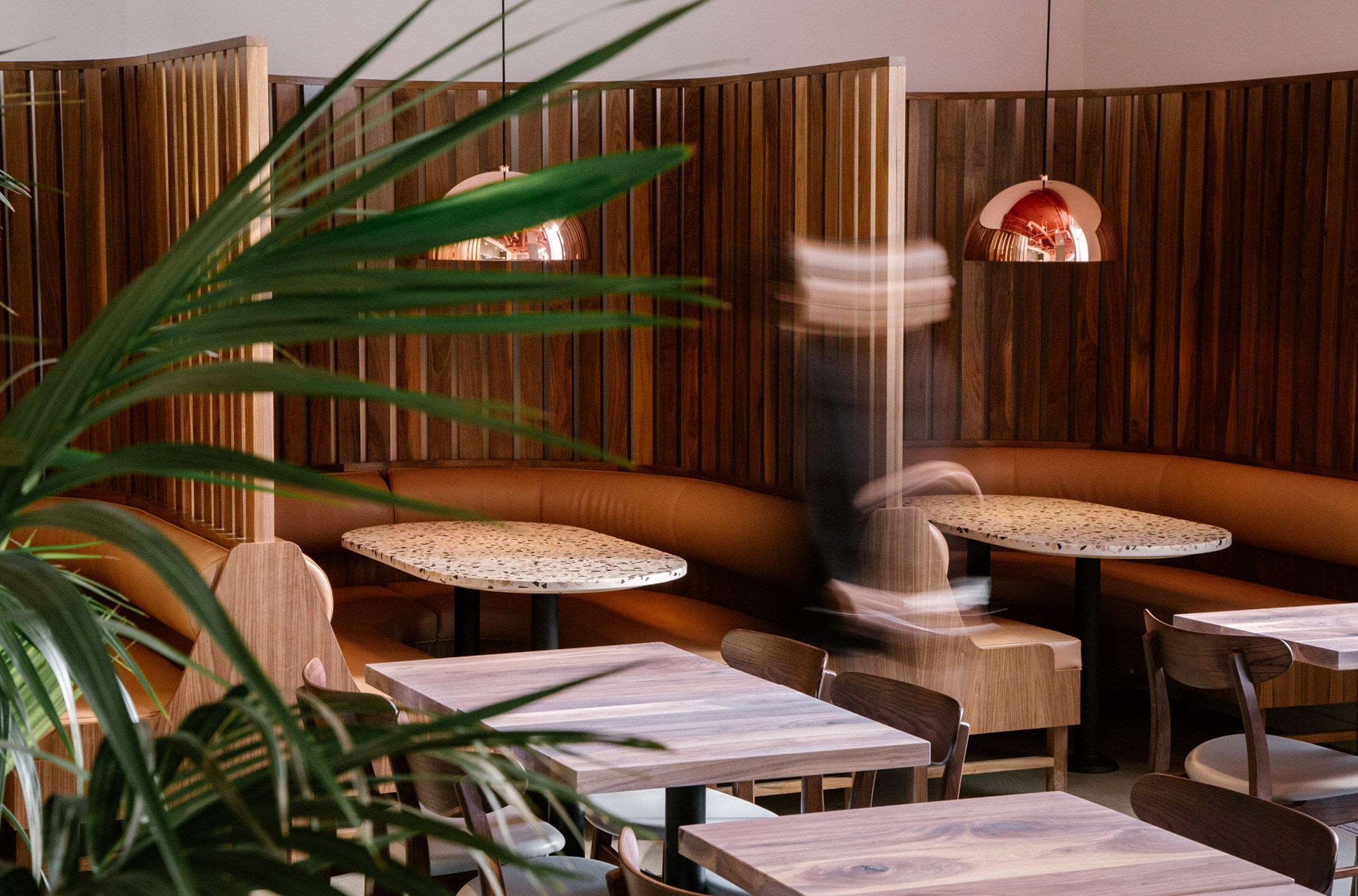 Suspended above the booths are domed metallic pendants. Other types of lighting in the space include glossy peach table lamps and a chandelier made of glass orbs.

The gastropub’s long bar is lined with wooden slats and is topped with terrazzo. Guests can enjoy cocktails while relaxing in chunky green stools with copper legs. Throughout the restaurant, ferns and cacti bring a little of the outdoors inside. 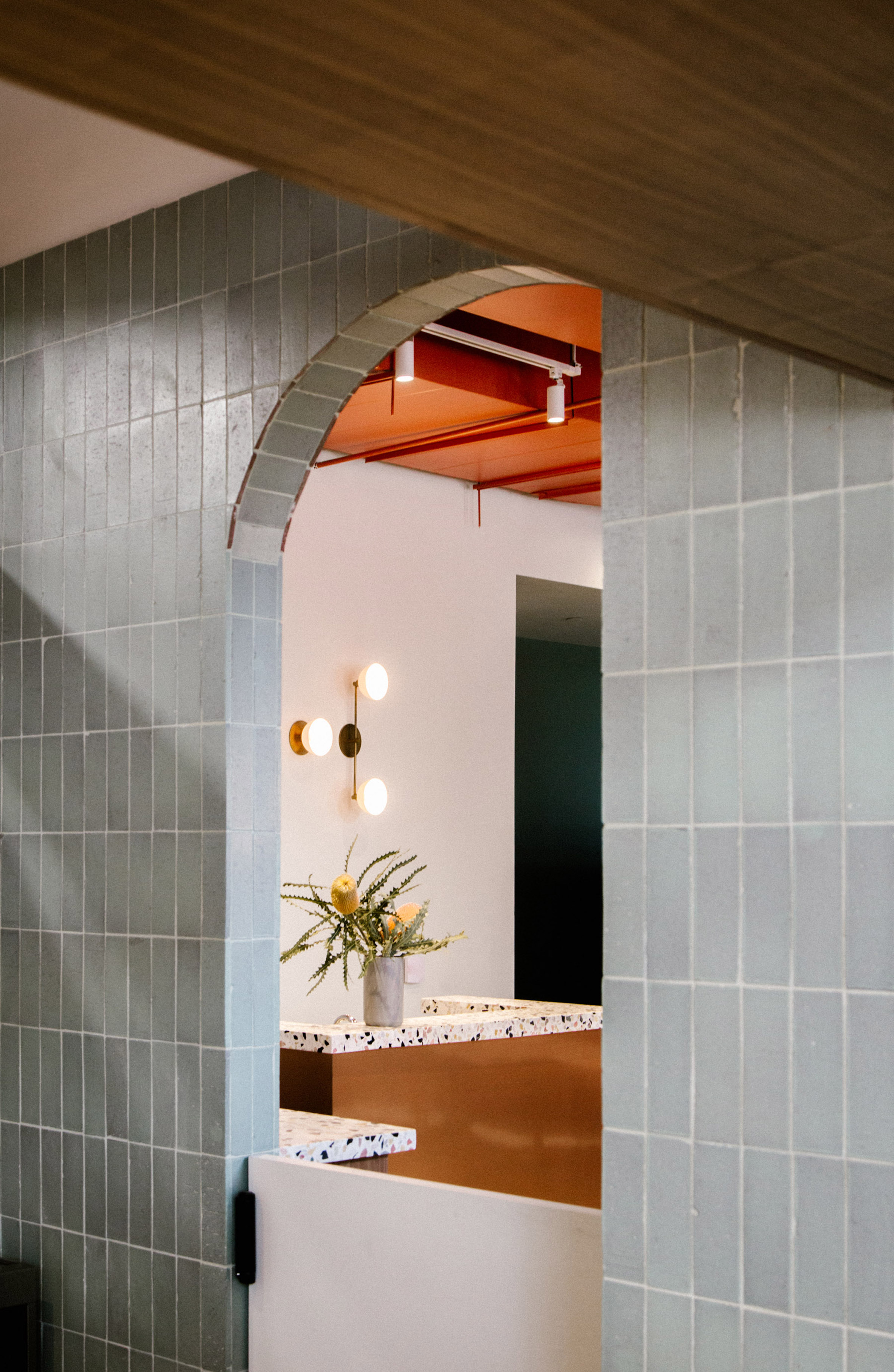 Overall, the restaurant is meant to have a “cohesive, unexpected material palette that is transporting and altogether satisfying”, the team said.

Founded in 2007, Project M Plus has a diverse portfolio of branding, interior design and architectural projects. Other work by the studio includes a daycare in Los Angeles that features arched passageways, colourful walls and whimsical artwork.

Photography is by Project M Plus.