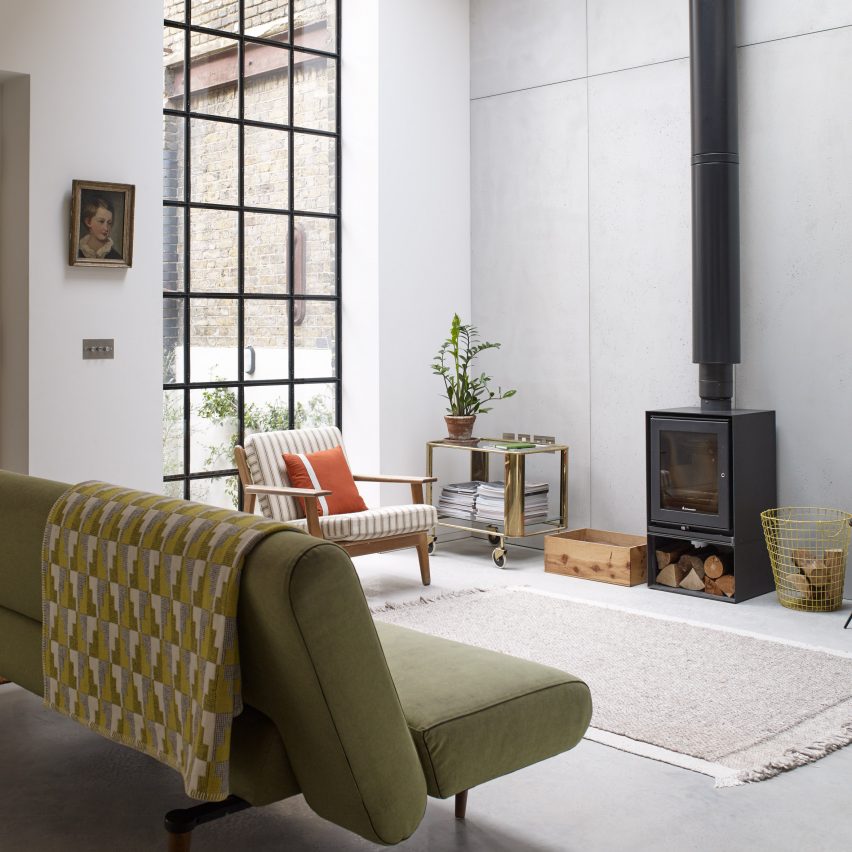 Interiors reporter Natasha Levy has selected 10 striking homes in east London that the city’s creatives have designed for themselves.

The projects are all from the East London Homes, published by Hoxton Mini Press, which showcases 29 design-focused dwellings that lie in the east of the English capital.

Each home included in the book is accompanied by a selection of photographs by Jon Aaron Green, and text that reveals how the owners have aesthetically curated their personal living quarters.

A notable number of the owners are architects or interior designers, but filmmakers, florists and restaurateurs are among the other creatives to be featured.

“When people think of east London, they tend to imagine warehouse conversions with high ceilings and exposed brickwork and artists living in their studios,” explained the book’s author, interior stylist Sarah Bagner.

“Though I have seen some beautiful flats in former factories that are reminders of the area’s industrial past, there is so much more to this eastern side of the city.”

Read about ten of the homes below: 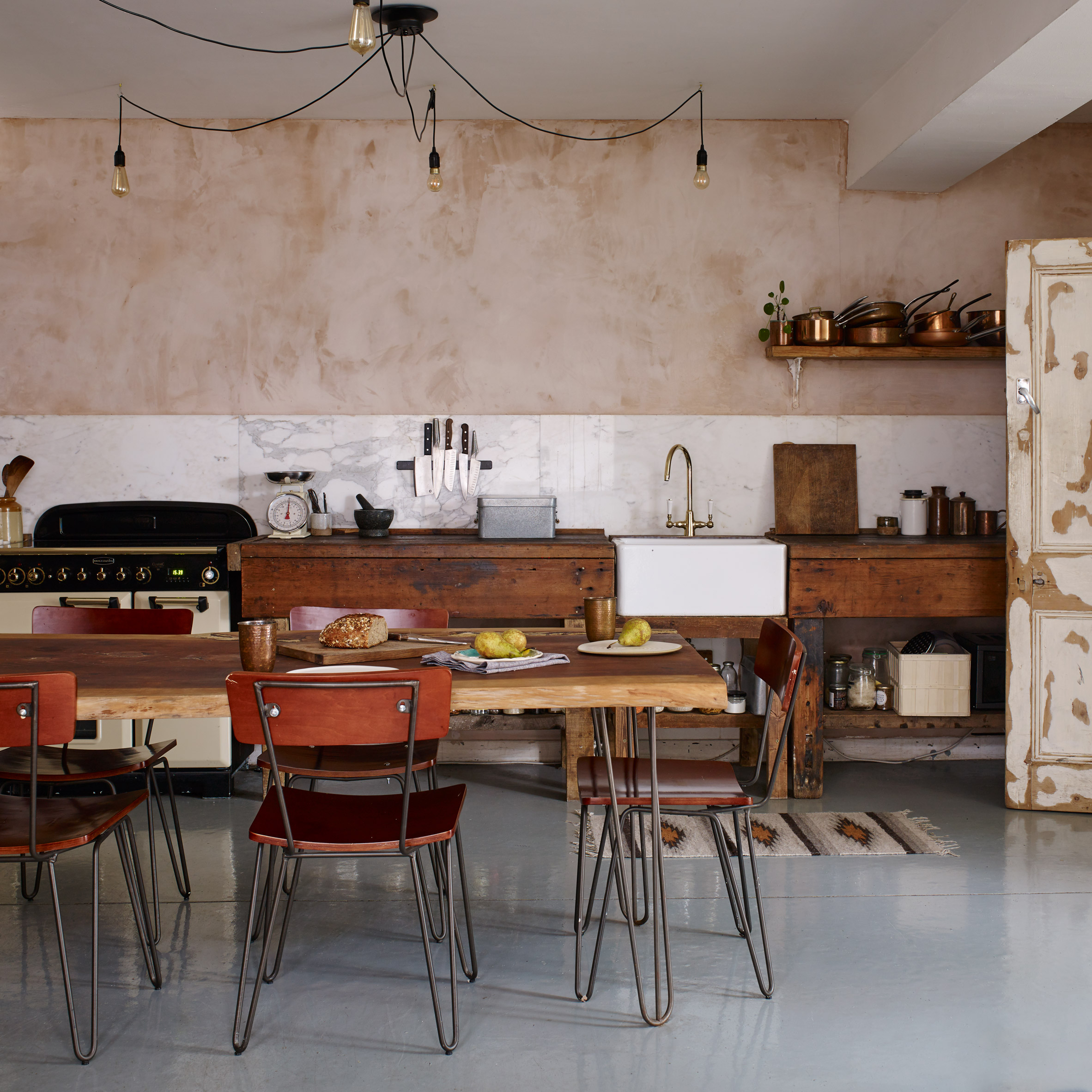 With the lease on this Clapton home set to run out in just a few years, its owners – florists Florence and James Kennedy – made sure that they took a frugal approach to designing its interiors.

The kitchen, for example, features a pale marble splashback crafted from an old fireplace surround purchased on eBay, and a couple of butchers’ blocks found in a local market.

Its raw-plaster walls have also been left untouched, complementing the earthy pink surfaces that appear upstairs in the sleeping quarters. 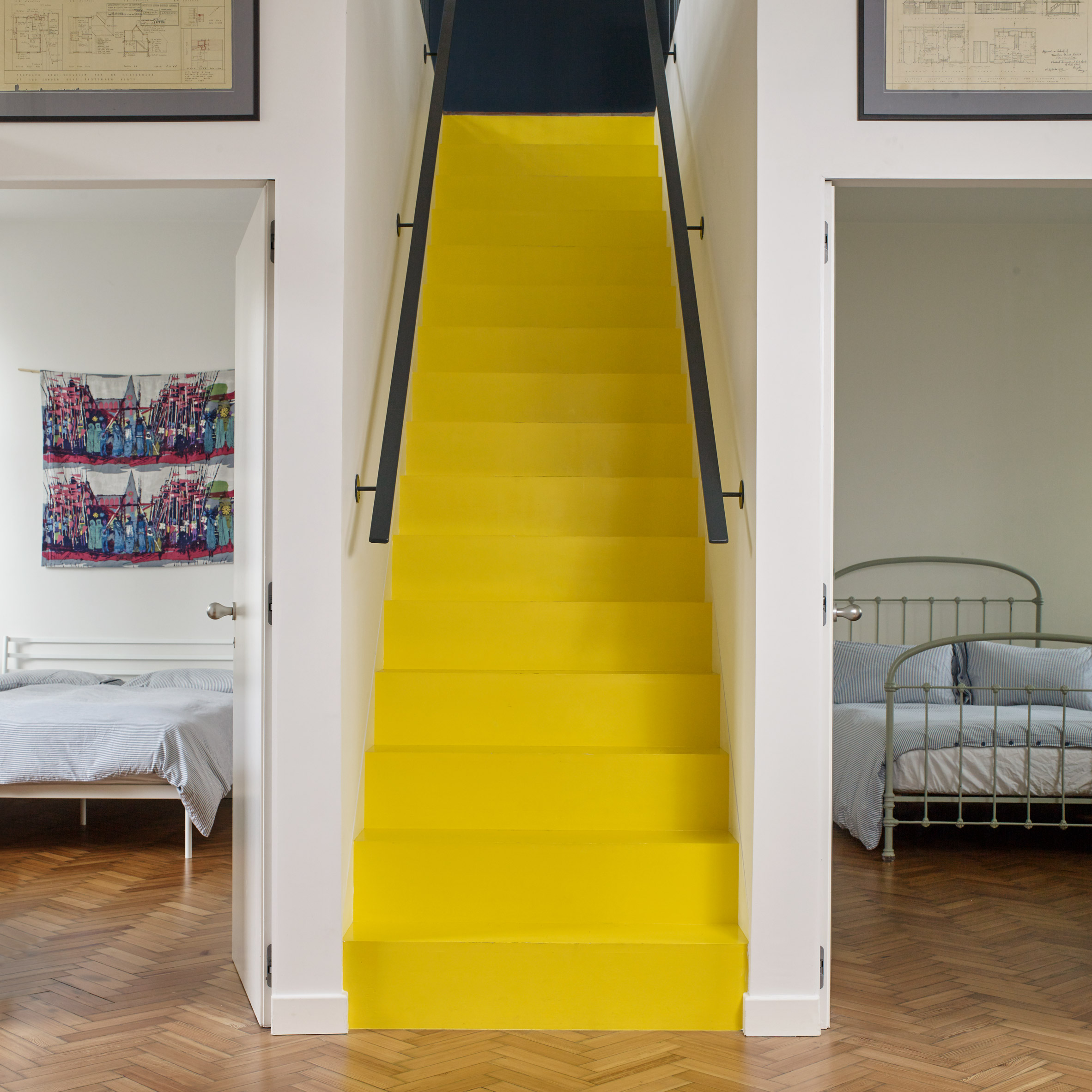 Two separate flats in the Forest Gate neighbourhood were knocked together to form this expansive home, at the centre of which lies a sunshine-yellow staircase.

One side of the ground floor is dedicated to cooking and eating, while the other is used for relaxing or entertaining guests.

Throughout there are what Carlo Viscione, who is a designer, and Florence Andrews, who is a project manager at the V&A, describe as “concentrations of clutter”, where they display an eclectic mix of personal trinkets. 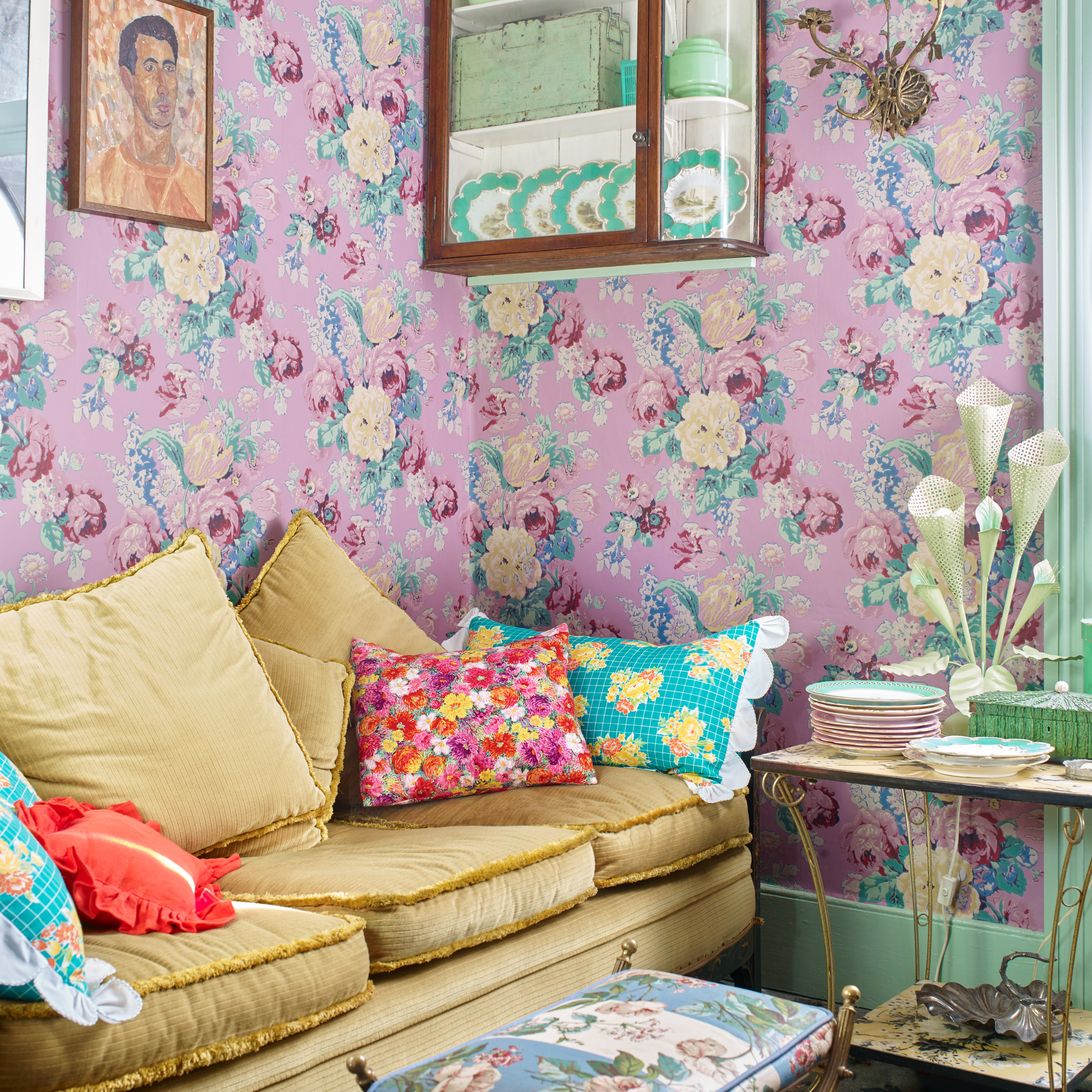 This home in east London’s Clapton neighbourhood channels what the owner, furniture specialist Kentaro Poteliakhof, describes as “Tokiana” – an aesthetic that mixes the brightly-coloured kitsch of Tokyo with the quaintness of an old English-country home.

In the living room, bubblegum-pink floral wallpaper clashes against a fringed, mustard-yellow sofa. Surrounding cabinets and side tables contain an array of vintage ornaments, which the owner has grouped and displayed according to colour. 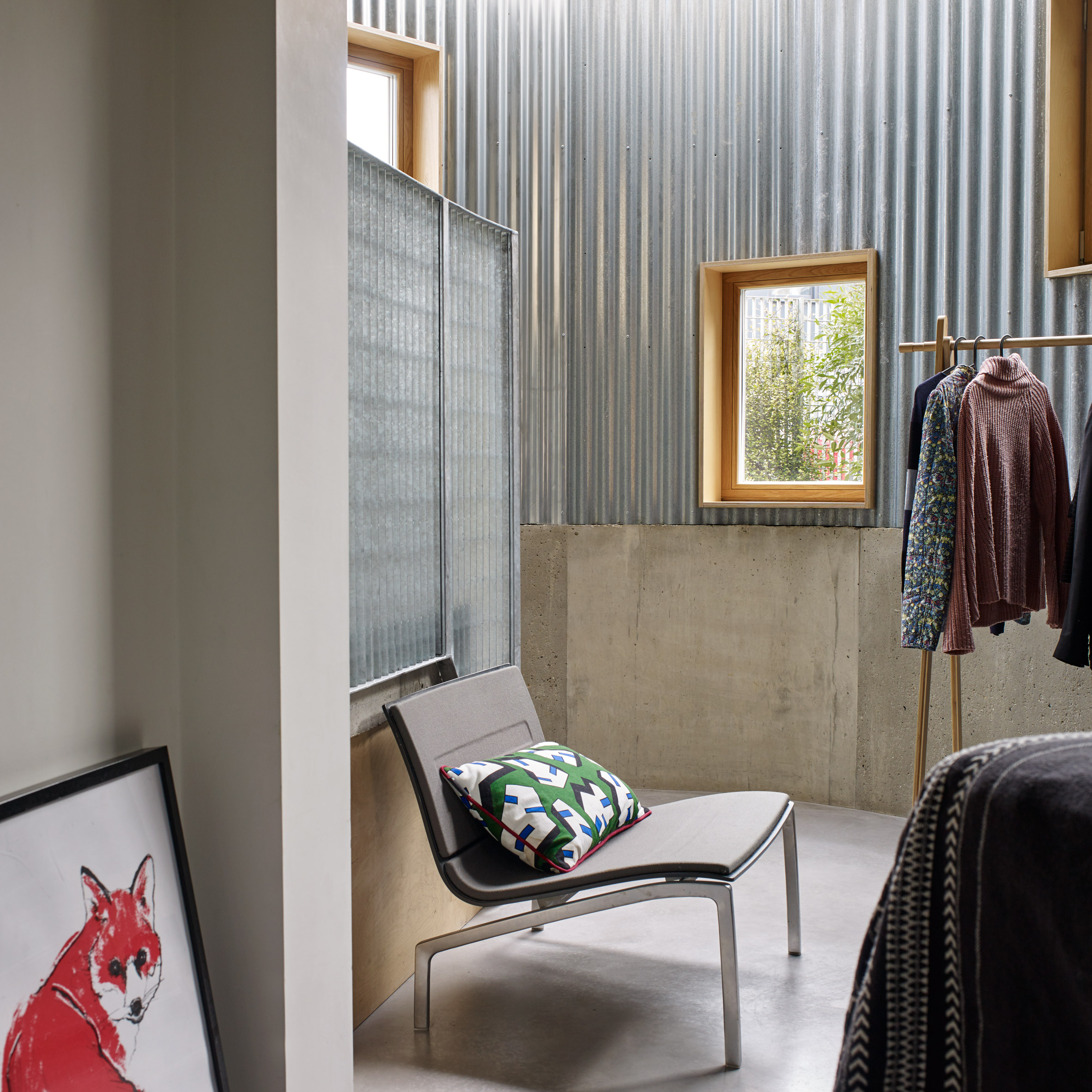 Stacked circular volumes form the body of this house in Stoke Newington, which takes cues from French composer Erik Satie’s Vexations – a looping piece of music that’s meant to be played 840 times over.

Inside the home, which was constructed by architecture practice Chance de Silva, curved surfaces are largely covered with corrugated steel or concrete. The owners have offset the industrial feel by dressing rooms with a smattering of woven cushions and throws. 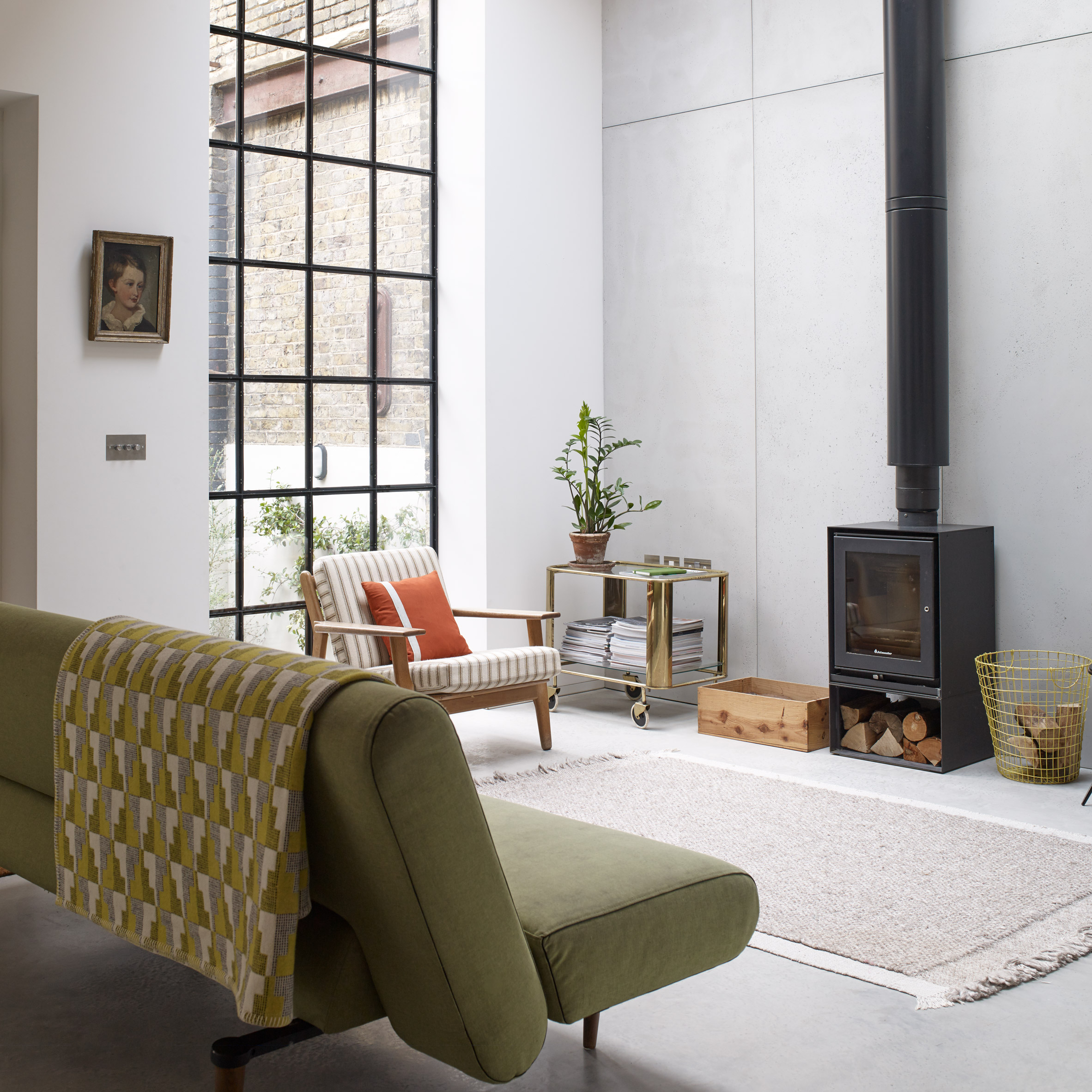 Upon purchase, this abandoned gin distillery in Whitechapel was a rat-infested “brick box with no windows”, but has since been transformed into a light-filled family home.

Scott, who is an architect, and Wood, an interior designer, opted to fill its interiors with an array of mid-century furnishings. These sit alongside high street-buys and antique pieces handed down from older relatives. 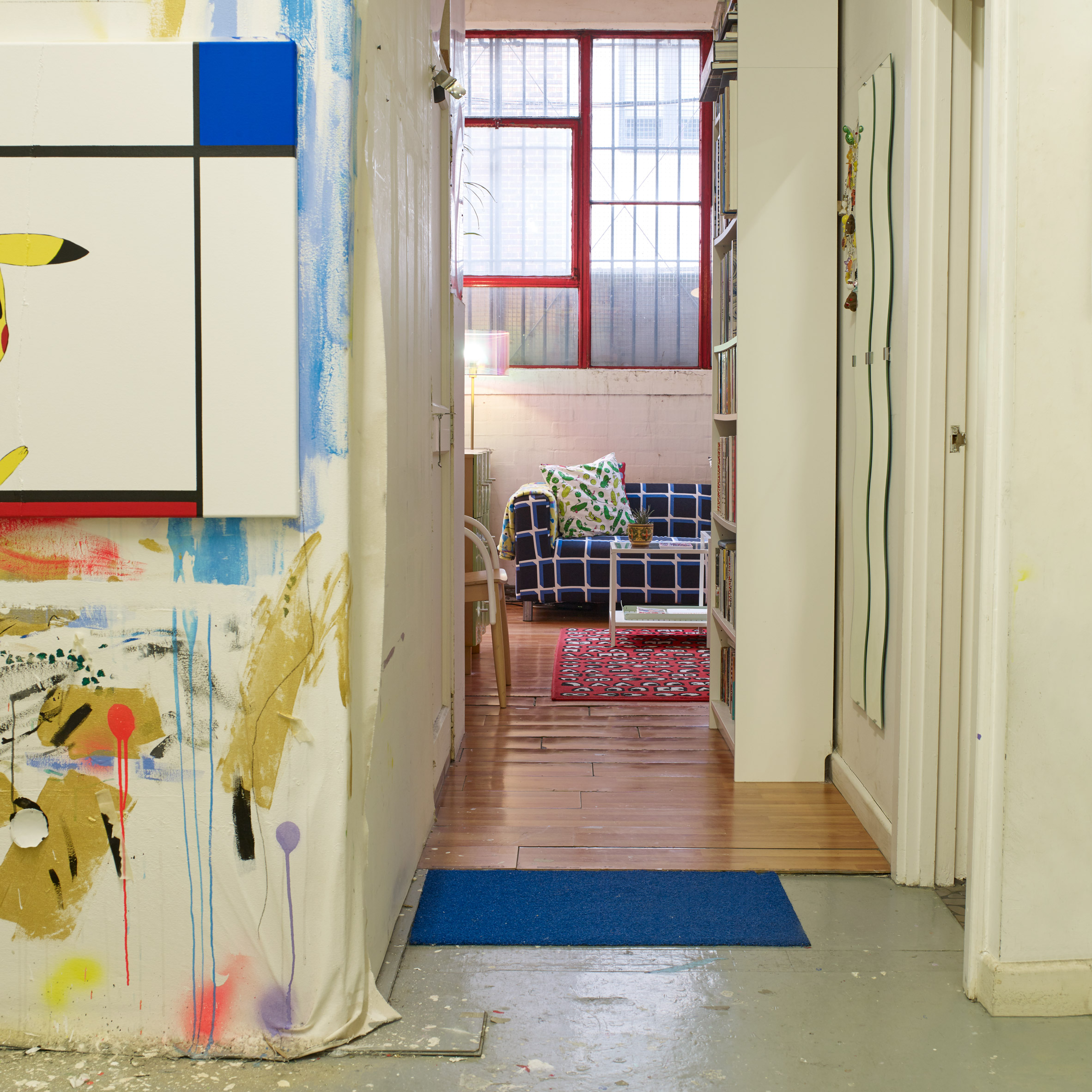 Pybus has turned a majority of the former factory into living space, but there are also work areas which he can freely splash with paint when in the process of making new artworks. 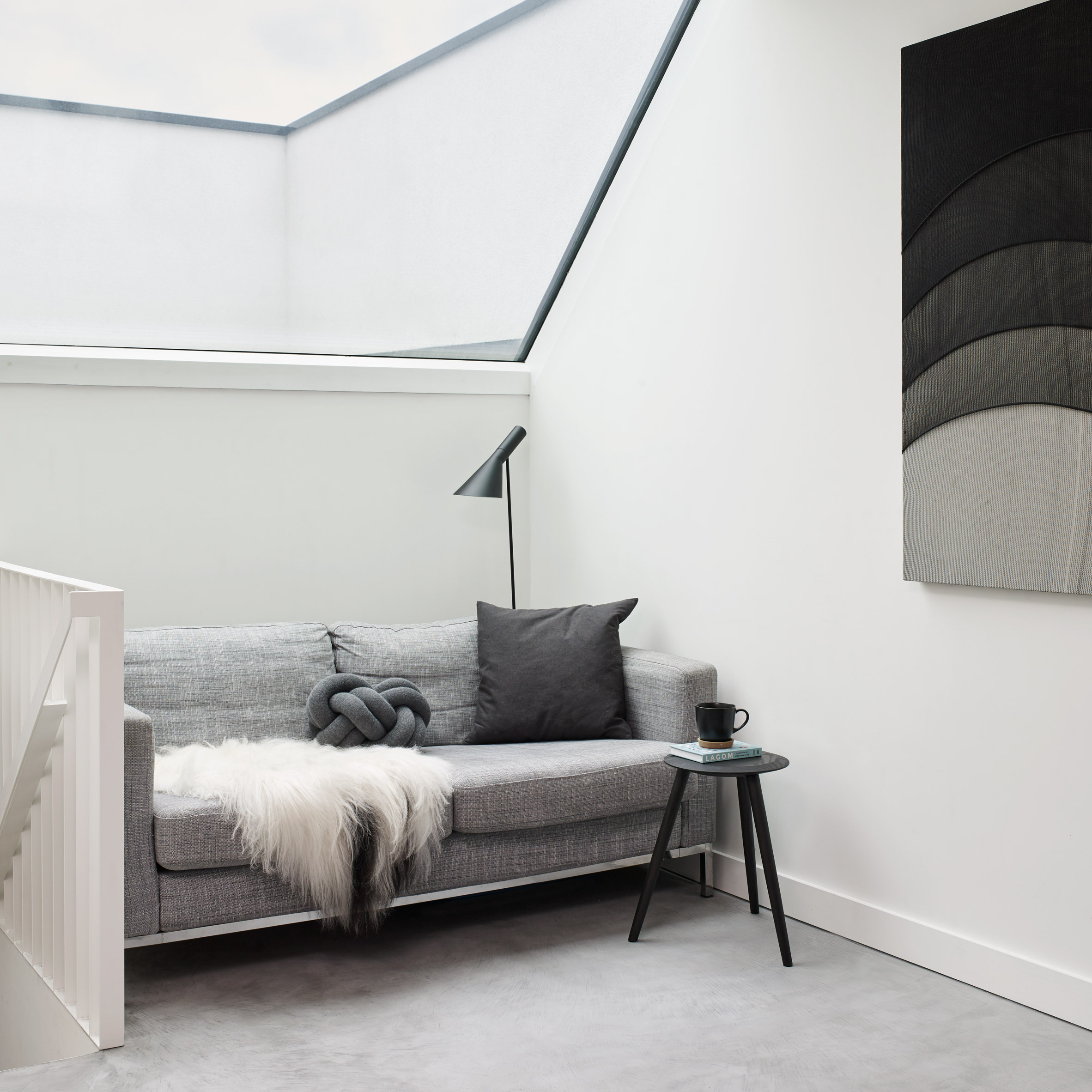 Former design engineer Joe Stuart oversaw the design and build of this Plaistow home, which sits on the site of a defunct coffin workshop and hearse garage.

There’s no hint of this grisly past in the interior, where there is a sequence of soothing, greyscale spaces dotted with contemporary furniture. Stuart’s partner, Lina Nilsson, said that the minimal aesthetic is largely informed by lagom – the Swedish term for having “just enough”. 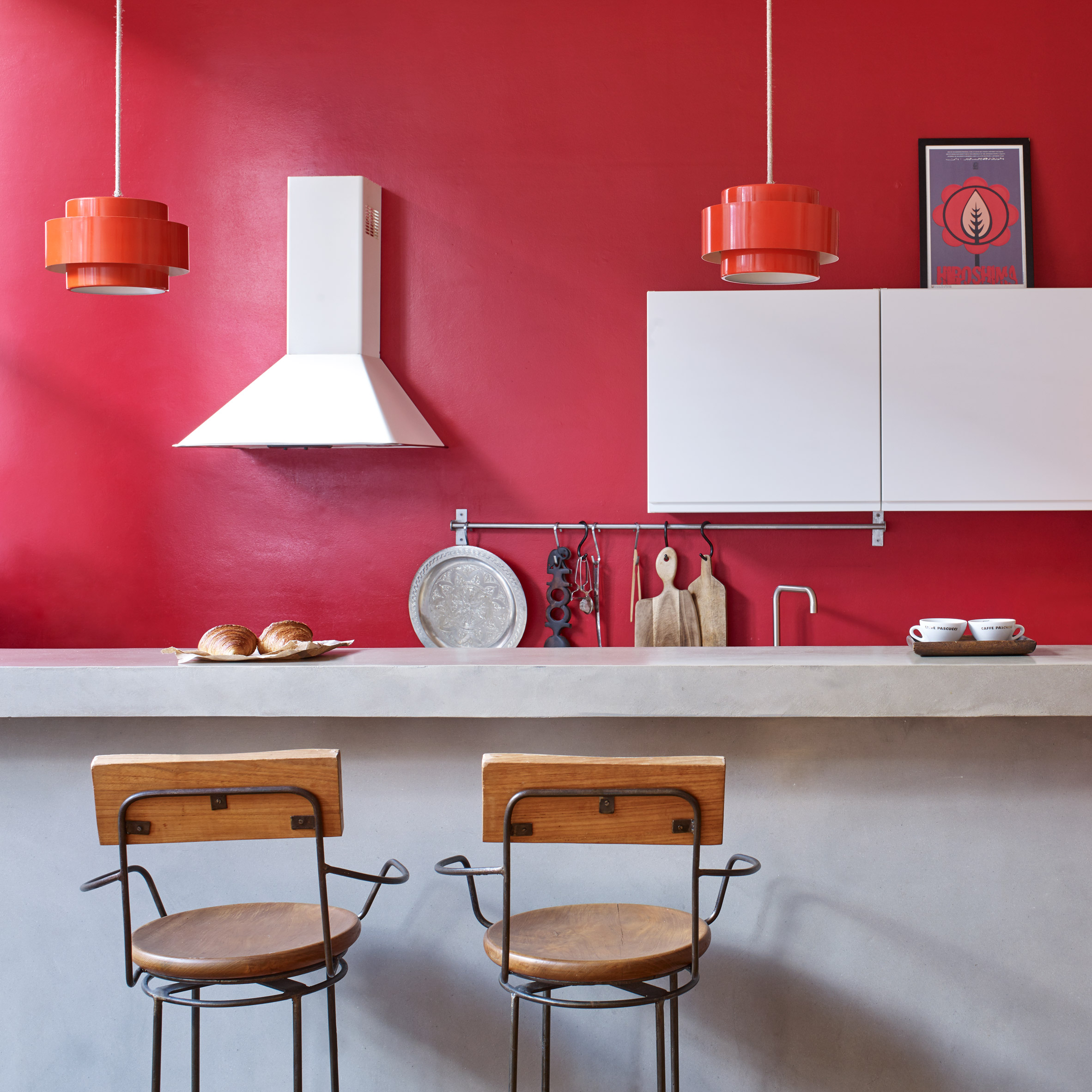 The bold crimson-red kitchen inside this Hackney home is meant to nod to the vibrant homelands of its owners – architect Chantal Martinelli, who hails from southern Italy, and her husband who is French-Algerian.

Martinelli, who also runs a local design store, has filled the rest of the home with ornaments gathered from North Africa and an abundance of leafy potted plants. 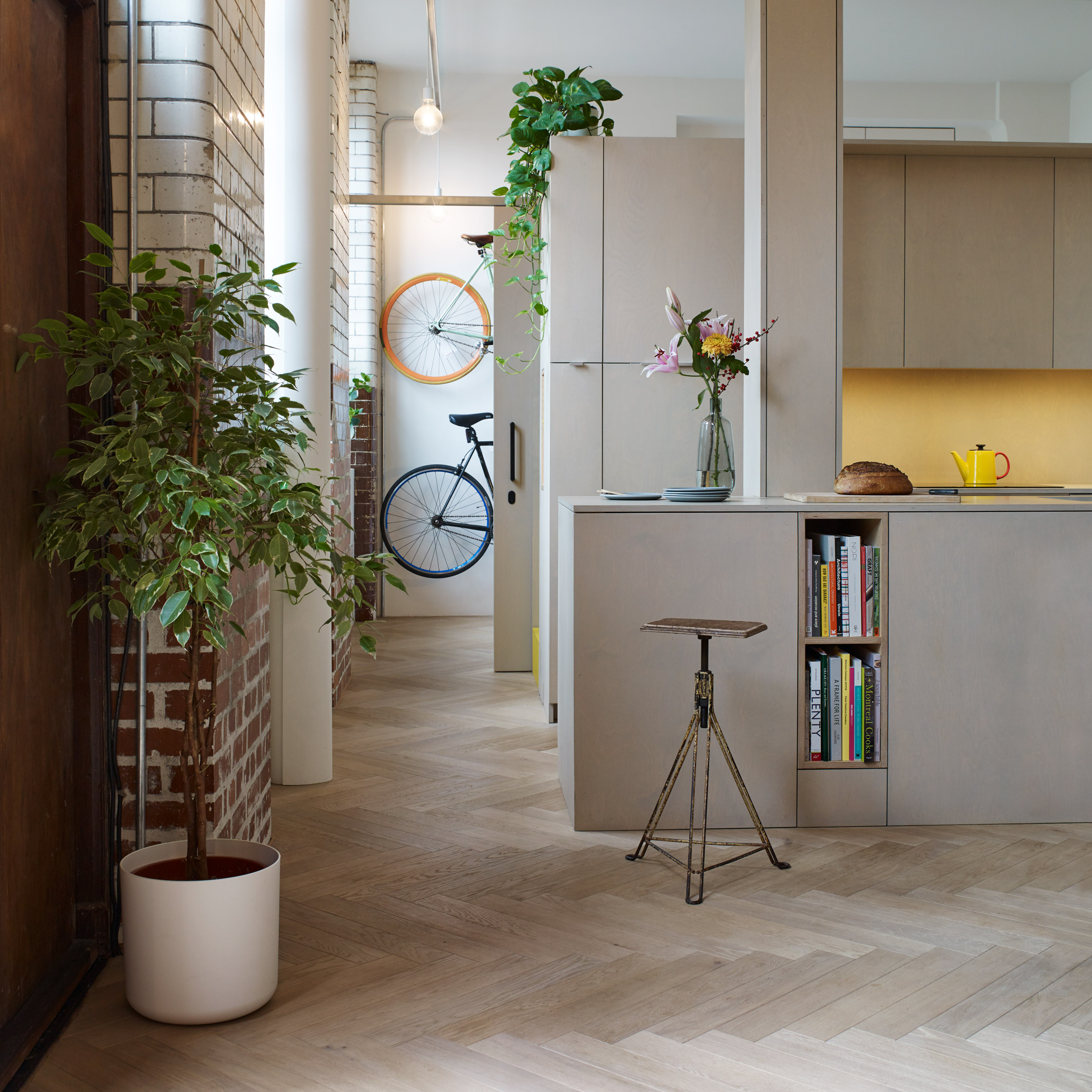 Plywood “pods” with in-built storage cupboards neatly tuck away the possessions of architects Michael Putman and Sara L’Esperance, who share this home in Bethnal Green.

The house, which was shortlisted in the 2019 Dezeen Awards, is set inside a former biscuit factory and still boasts some time-worn details, like crumbling glazed-brick walls. 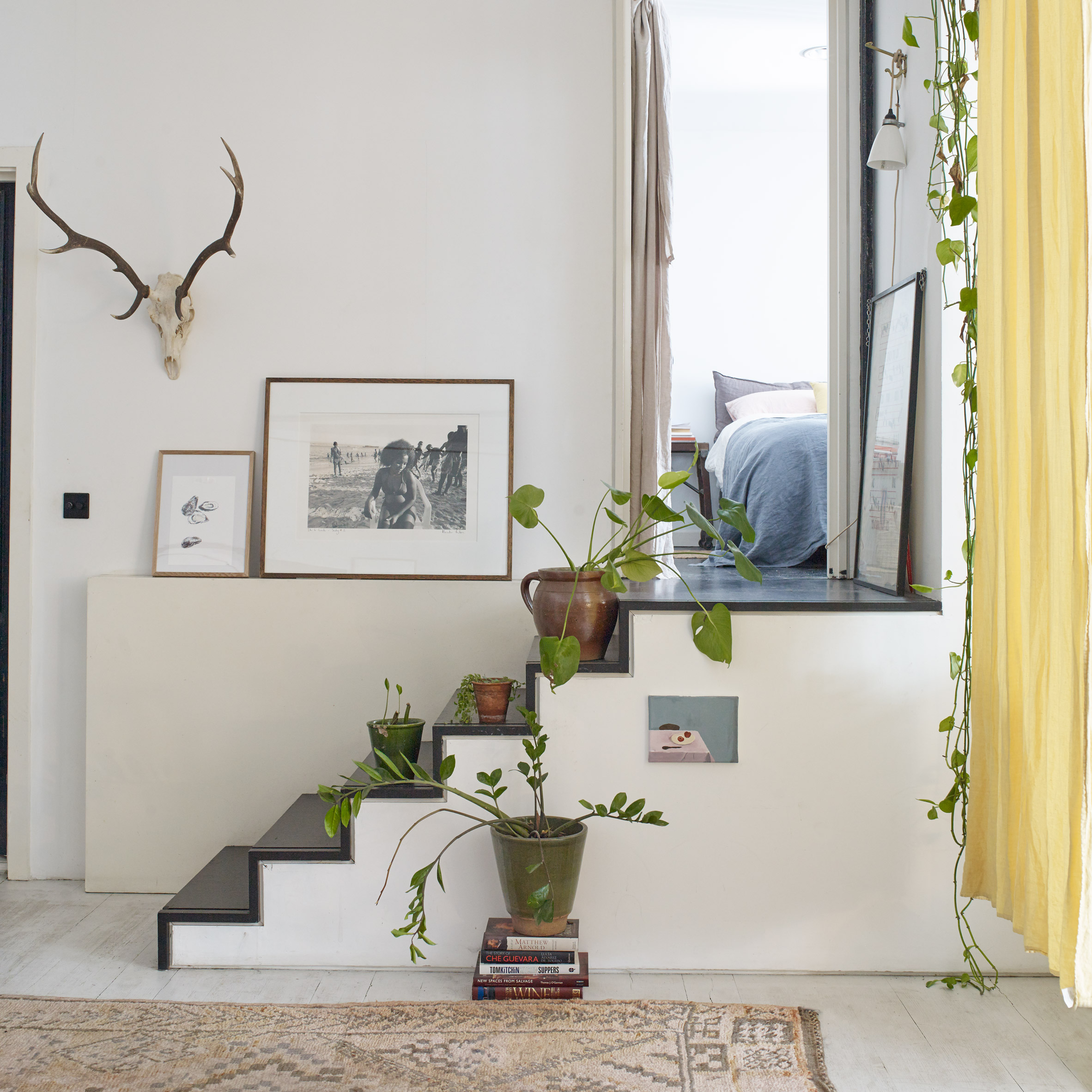 A holiday to Morocco inspired restaurateur Clare Lattin to swap the doors in her Hackney Wick home for washed-out linen curtains.

“They have a magical way of doing things [in Morocco]. The colours are always dusty and faded,” explained Lattin.

Ornaments and plant pots are casually displayed throughout on stools, the treads of stairs or stacks of books.