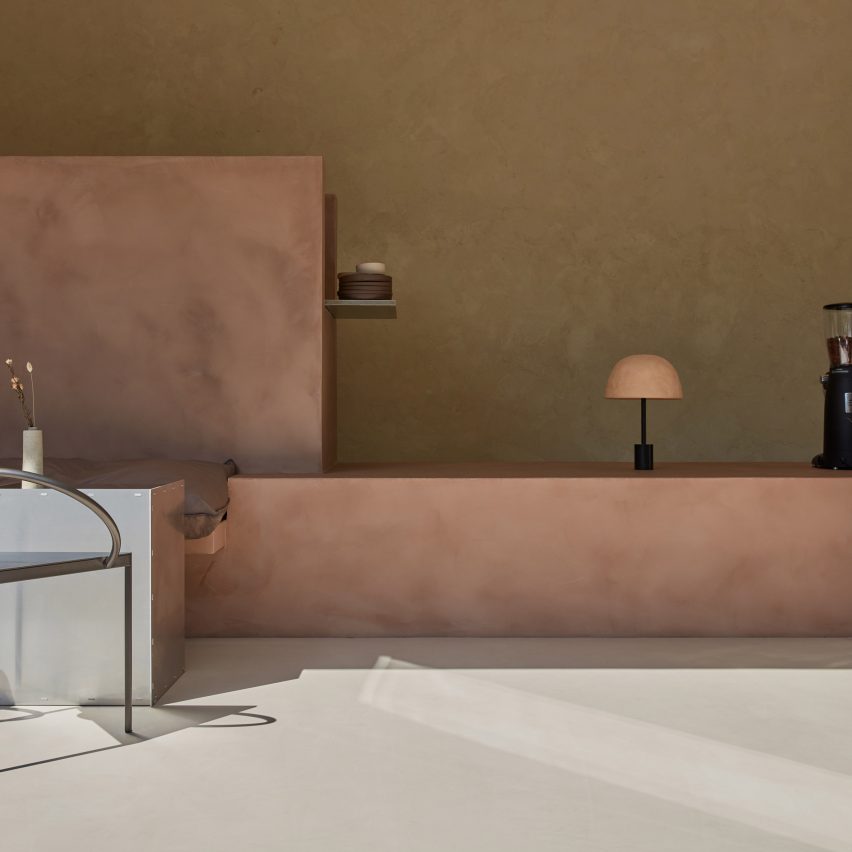 A chunky pink-plaster counter dominates the otherwise sparse interior of this cafe in Al Ain, Abu Dhabi, which has been revamped by design studio Bone.

La Petite is situated in Al Ain’s Al Tiwayyah neighbourhood and has been a popular food and drink spot amongst locals for several years.

Over time it had grown tired in appearance, encouraging its owners to tweak its visual identity and menu. Design studio Bone was brought on board to completely overhaul the cafe’s interiors. 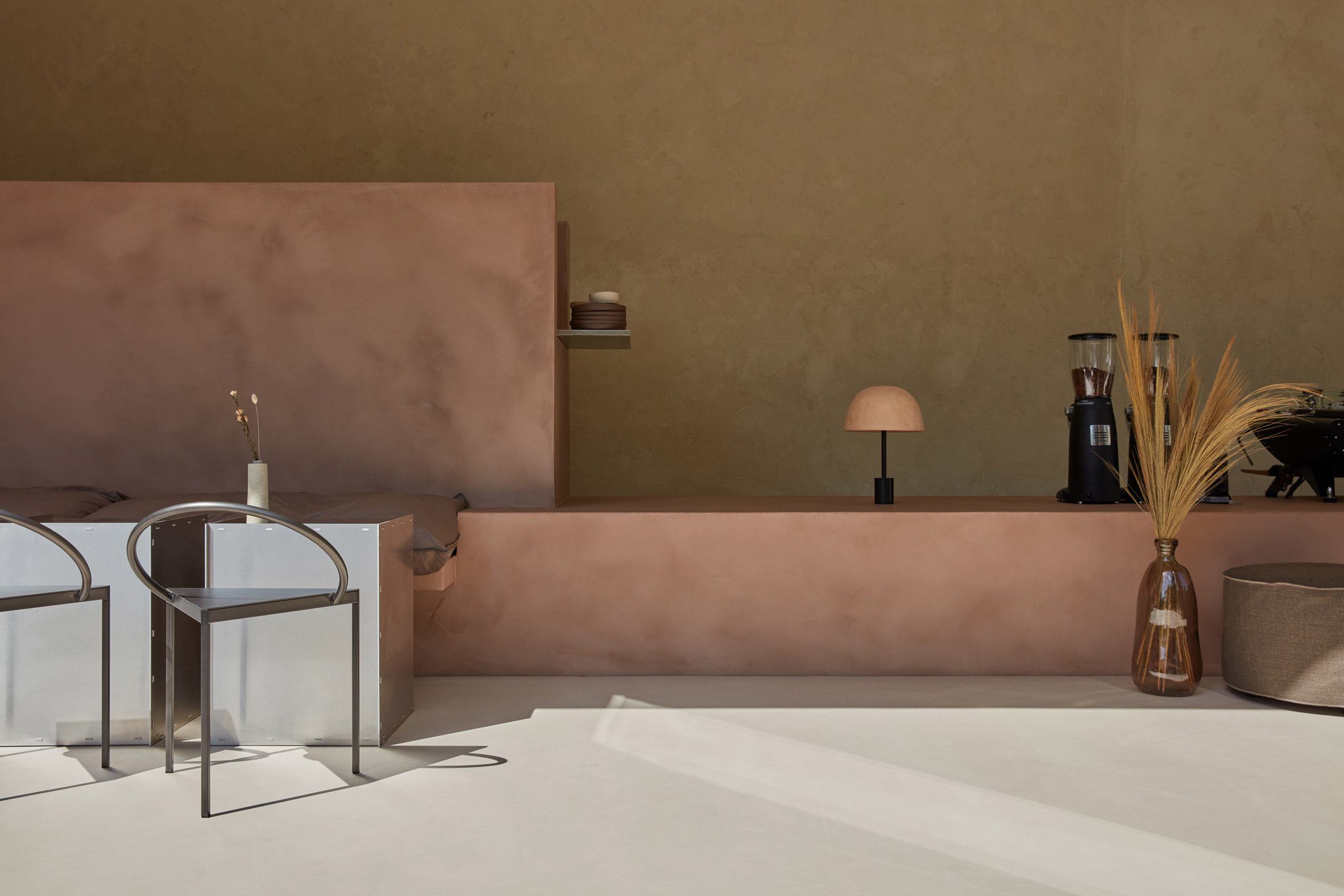 The 85-square-metre space is now anchored by a huge service counter that’s covered in dusty-pink plaster. It comprises two different-sized blocks – the taller one conceals back-of-house utilities, while the lower one is where staff prepare orders.

Directly in front is a row of earth-tone seating poufs, allowing the lower block to serve as a spot for customers to enjoy their drinks. A cushioned bench seat has also been integrated into the taller block. 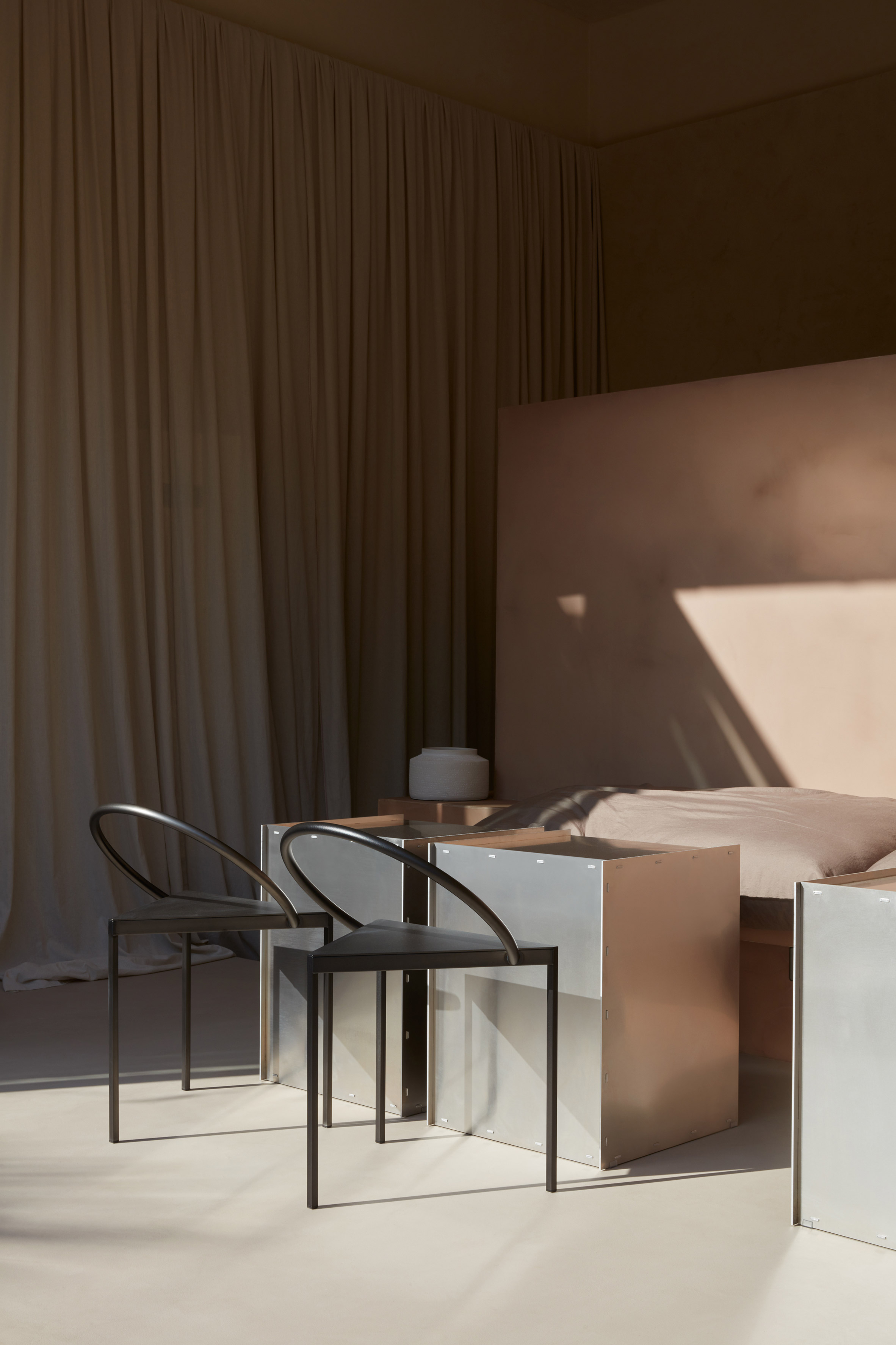 “We wanted to highlight the longitudinal nature of the space by designing a monolithic volume that functions as a working, serving, display, table, and seating surface – redefining the conventional coffee bar,” the studio told Dezeen.

“In order to avoid the volume feeling invasive, the idea was to create a sunken block that serves both the barista and the customer,” it continued.

“The goal was to achieve a fluid interaction between the customer seated in front of the bar and the barista at work behind the bar – where both eye levels meet.” 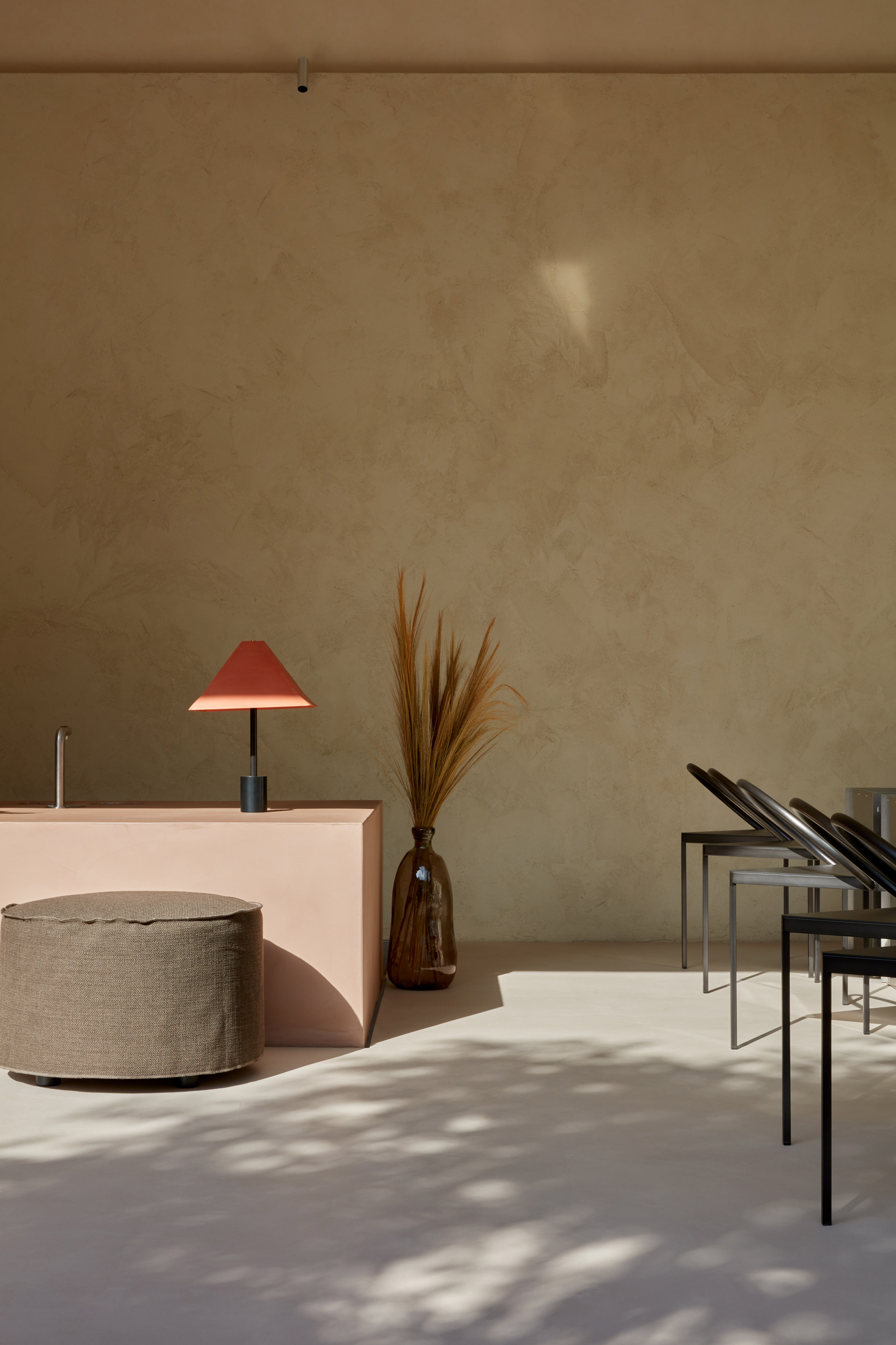 More seating is available on the opposite side of the cafe, where a white communal sofa runs the length of an entire wall.

This takes cues from the Arabic term majlis – a private lounge or reception room where guests are entertained, typically sitting on floor cushions that are placed around the periphery of the room. 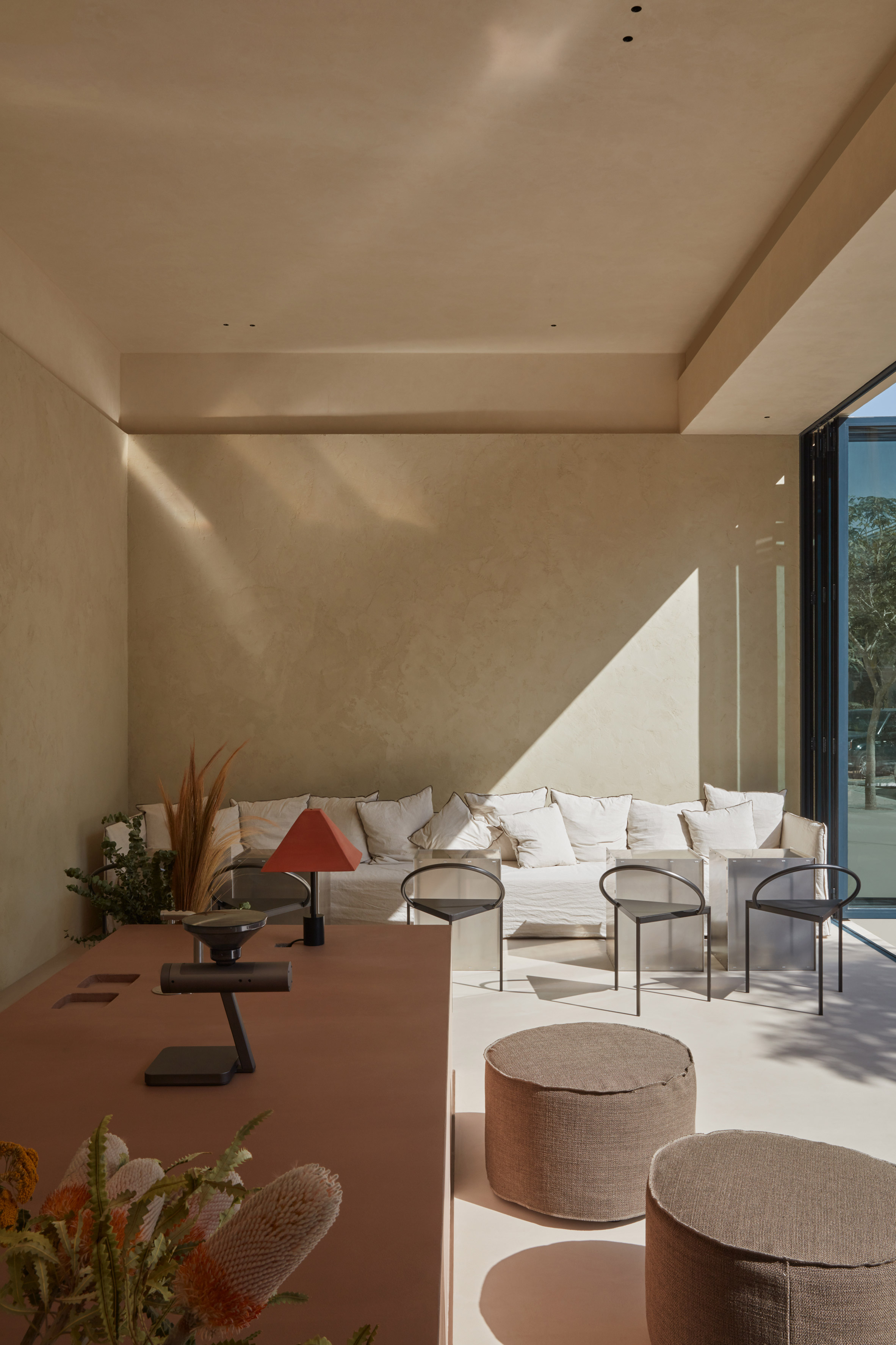 Blocky steel side tables and black-frame chairs from multidisciplinary design studio Frama have also been used to decorate the space, as well as a handful of vases filled with wildflowers.

Surfaces throughout have been washed with sandy-beige plaster, the colour intended as a subtle nod to Al Ain’s desert landscape. 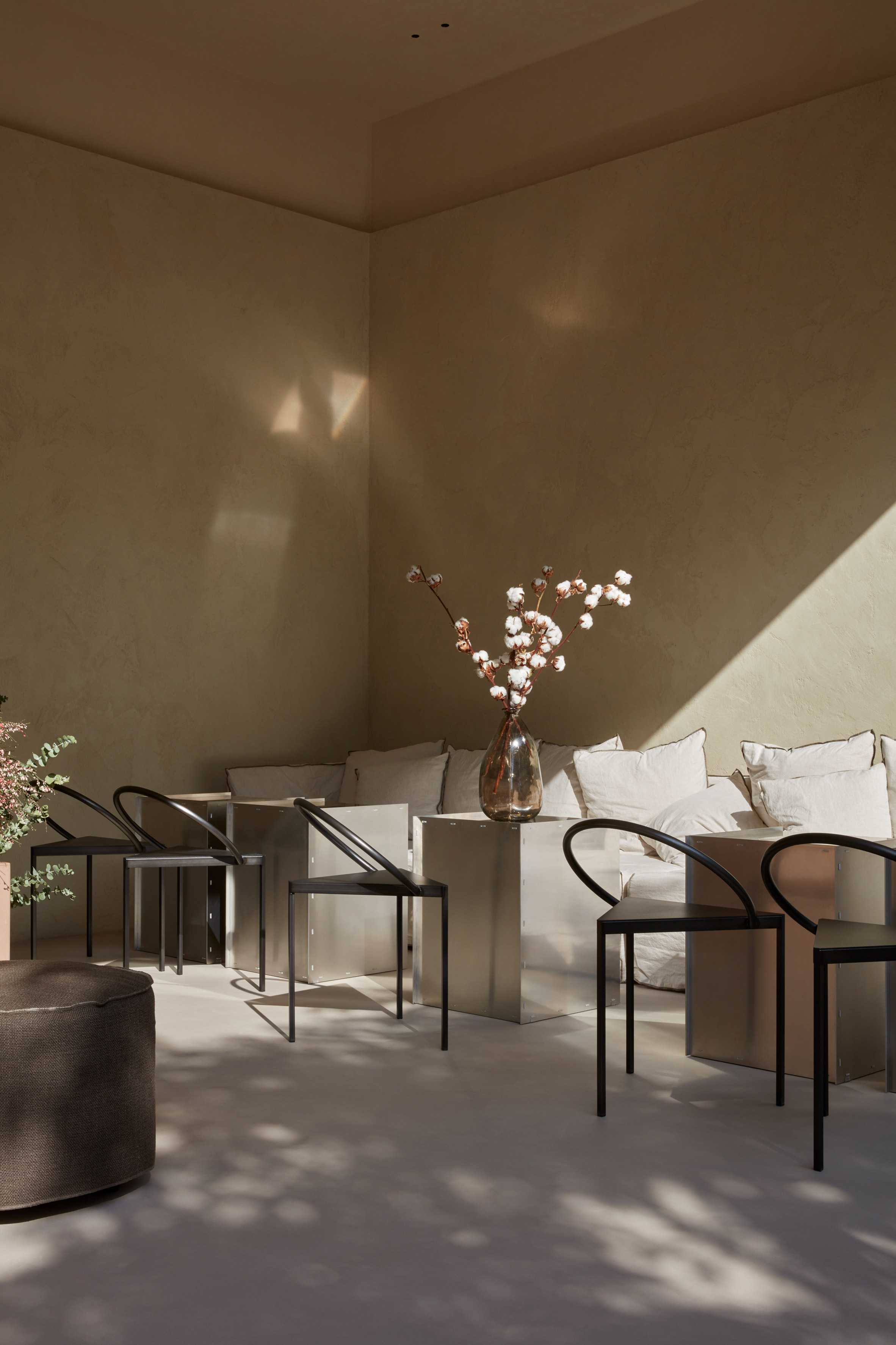 The glass doors that previously fronted the cafe have been replaced by 2.6 metre-high glazed panels. These can be concertinaed to open up the space to a gravelled outdoor terrace that’s dressed with casual fold-out timber chairs.

Customers can alternatively perch on the high-back cushions that have been placed on the cafe’s steps. 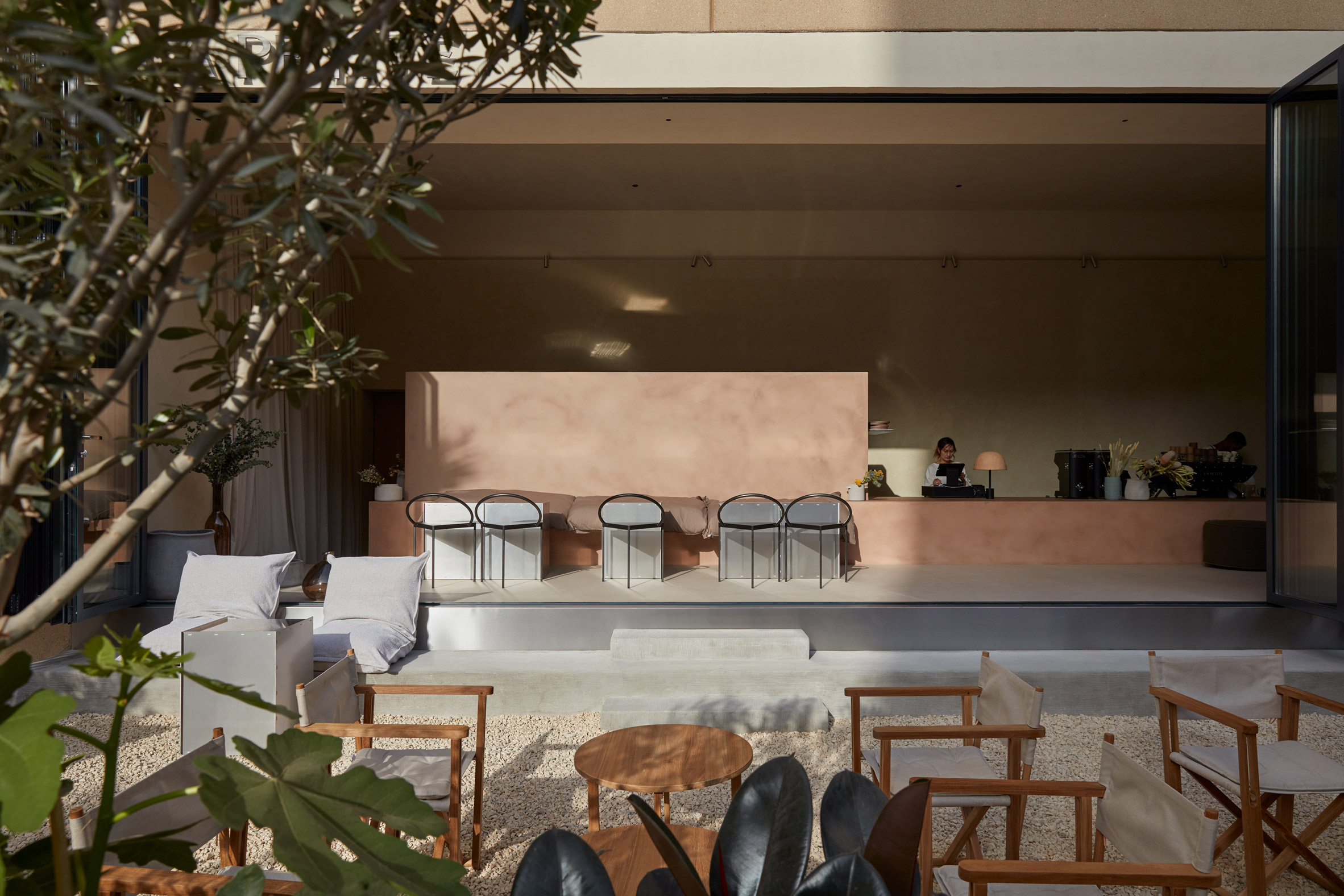 La Petite is the latest cafe to be completed by Bone, which recently developed the interiors of the Hoof eatery in Ras Al Khaimah.

Photography is by Oculis Project.