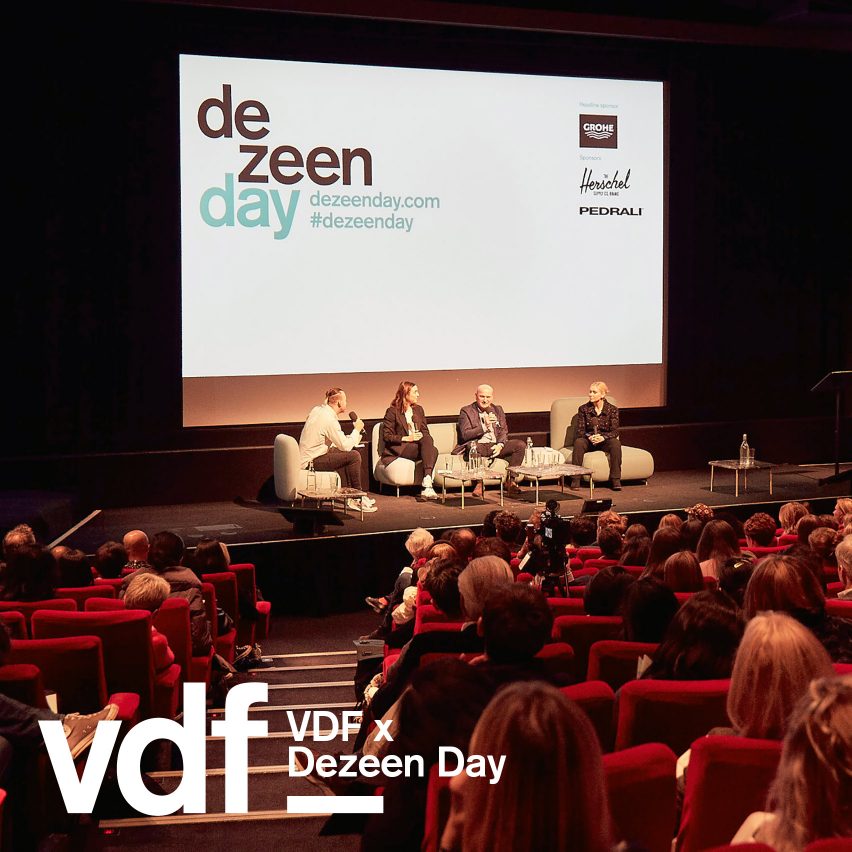 Dezeen Day was Dezeen’s inaugural international architecture and design conference. Six months after the event took place, we are broadcasting all the talks, panel discussions and conversations from 3:00pm UK time.

Originally taking place at BFI Southbank in London on 30 October 2019, the conference set the agenda for the global design community, tackling some of the biggest and most pressing issues facing architecture and design.

Highlights included a debate between Zaha Hadid Architects principal Patrik Schumacher and Pratt Institute dean Harriet Harriss about architecture’s long-hours culture and a clash between Dutch designer Richard Hutten and Ellen MacArthur Foundation CEO Andrew Morlet about whether plastic can be part of a circular economy.

You can watch a continuous stream of the whole event above. Alternatively, here are videos of each individual talk:

Humans need to design a better future for the planet, Paola Antonelli told the Dezeen Day audience in the first keynote of the day.

Antonelli, senior curator of architecture and design at The Museum of Modern Art in New York, discussed the impact of her groundbreaking exhibition Broken Nature: Design Takes on Human Survival.

Architect Arthur Mamou-Mani and designers Natsai Audrey Chieza and Nienke Hoogvliet discussed the problems of plastic waste and what materials could replace it in the first panel discussion of the day, which was moderated by Fairs.

They disagreed about whether we can live without plastic, with Mamou-Mani saying “we still need” the material and Hoogvliet arguing that “we shouldn’t produce any more”. Chieza argued that good design is about interrogating systems, not just creating beautiful chairs. “Designers are starting to understand they don’t design in a vacuum,” she said.

The second panel discussion, moderated by Dezeen’s editor Tom Ravenscroft, explored what cities of the future will look like and what technologies will transform them.

It featured Paul Priestman, co-founder of transportation studio PriestmanGoode, Rachel Armstrong, professor of experimental architecture at Newcastle University, and Suzanne Livingston, co-curator of the Barbican’s AI: More than Human exhibition, who argued that artificial intelligence will take over from humans and force us to abandon our anthropocentric view of the world.

The second keynote presentation of the day was delivered by speculative architect Liam Young, who spoke about how film-making techniques can help us imagine different urban futures and how architects can use their skills in areas such as movies and entertainment.

Architects could have more influence if they applied their skills to video games instead of designing “rich houses for rich people”, he told the audience in his lecture, which he delivered over a montage of clips from his own films.

Conversation: Designing for the circular economy

The two speakers disagreed over the role of plastic in the circular economy. “Plastic in and of itself is an amazing material,” Morlet said. “That is such bullshit,” Hutten retorted, describing plastic as “the cancer of our planet.”

Creatives should use their time working at other companies to make their most significant mistakes, according to Huang. “Don’t make mistakes at your own company” she told the Dezeen Day audience.

The final panel discussion of the day featured a lively debate between Neil Pinder, architecture and design teacher at Graveney School, Stacie Woolsey, a design graduate who created her own masters course, Patrik Schumacher, principal at Zaha Hadid Architects, and Harriet Harriss, dean of the Pratt Institute School of Architecture.

Schumacher defended architecture’s long-hours culture in the session, which was hosted by Dezeen’s assistant editor India Block. He argued that protecting students from working too hard could lead to a “socialist kind of world of stagnation”, which led Harriss to retort: “It’s very important to just bust the myth here that longer hours equals productivity.”

Dezeen Day concluded with a keynote presentation by designer and artist Alexandra Daisy Ginsberg, who discussed what it means to design “a better world”.

She suggested an optimistic vision of the future would be one that doesn’t involve humans. “We’re selfish – we’re trying to solve problems for ourselves,” she said.