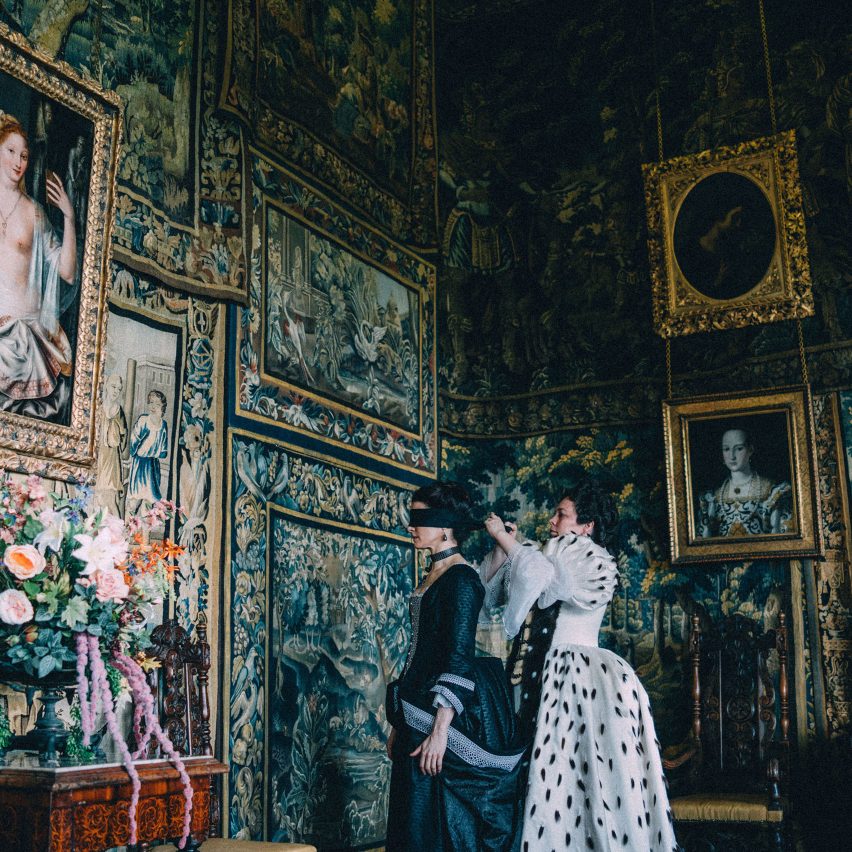 The coronavirus crisis means we’re spending more time indoors than ever before, so Dezeen’s Natasha Levy has selected 10 films with stand-out interiors that can offer some escape from your own four walls.

The snowy mountaintops of a fictitious country in Eastern European is the backdrop for The Grand Budapest Hotel, a comedic drama that sees a concierge employee framed for murder.

Crimson-red carpets, marble columns and ornate brass lighting adorn the hotel’s lobby, which was created in the atrium of Görlitzer Warenhaus – a vacant art-nouveau department store in eastern Germany.

The Grand Budapest Hotel is available to watch on Amazon.

A concrete-and-glass mansion hidden on a hillside in Malibu, California, is the setting for Nocturnal Animals, a moody thriller directed by fashion designer Tom Ford.

The interior of the home is filled with expensive furnishings and artworks, but feels increasingly menacing after the protagonist receives a disturbing novel manuscript from her estranged husband.

Nocturnal Animals is available to watch on Amazon and Hulu.

Initially Bateman’s apartment appears to be an immaculate bachelor pad, complete with bright-white walls, glinting steel appliances and a couple of Mies van der Rohe‘s Barcelona chairs – but it soon becomes the setting for his most gruesome acts.

American Psycho is available to watch on BFI Player and Youtube.

Villa Albergoni, an uninhibited mansion in northern Italy, is the sumptuous setting for Call Me By Your Name – a come-of-age tale that sees romance bloom between teenager Elio Perlman and a 24-year-old grad student.

Interior designer Violante Visconti Di Modrone gave the property a lived-in quality, carefully curating each room to reflect Perlman’s cultured family and upbringing. Props include antique maps, paintings and books, as well as glassware and crockery that once belonged to Di Modrone’s own parents.

Call Me By Your Name is available to watch on Amazon and Google Play.

Heavily-tapestried walls and plump four-mattress beds are some of the rich details to feature in the interiors of The Favourite – a black comedy that sees two royal cousins jostle for the attention of Queen Anne.

The film is set during the 18th century, but production designer Fiona Crumble told Dezeen she didn’t feel the need to precisely replicate the decor of the period: “We just found our own language for how to represent the story rather than necessarily representing accurate depictions of Queen Anne style.”

The Favourite is available to watch on Youtube, Amazon, Google Play and Now TV.

Garish retro interiors appear throughout Stanley Kubrick’s A Clockwork Orange, which documents the horrific crimes committed by a gang of young men in a dystopic Britain.

Many scenes were shot inside real homes, including a Hertfordshire property called Skybreak that was created by architecture practice Team 4. One of the few built sets was for the film’s Korova Milk Bar, a fictitious drinks venue filled with nude fibreglass mannequins.

A Clockwork Orange is available to watch on BFI Player, Youtube, Google Play and Amazon.

In horror flick Midsommar, folksy interiors help veil the grisly rituals being secretly carried out by a pagan cult.

One of the film’s key spaces – a lofty, barn-like dorm that features an eerily bewitching wall mural – draws upon centuries-old Swedish farmhouses that production designer Henrik Svensson came across during research for the movie.

Midsommar is available to watch on Amazon.

Director Spike Jonze’s sci-fi romance film Her chronicles how a man falls in love with an artificially intelligent virtual assistant.

The lonely protagonist resides in a high-rise minimalist apartment that has unspoilt vistas of a near-future Los Angeles – production designer KK Barrett developed the twinkling skyline by blending the architectural landscape of LA with Shanghai.

Her is available to watch on Youtube, Google Play and Amazon.

The Great Gatsby is available to watch on Amazon, Youtube and Google Play.

Most of the filming was actually done in Malaysia, where abandoned mansions and ex-boutique hotels were turned into character’s opulent homes. Set designers painted floors to look like they were clad with expensive tiles, upholstered walls in ornate wallpaper and even had a faux stuffed tiger created.

Crazy Rich Asians is available to watch on Google Play and Youtube.

The post 10 movies with striking interior design to watch under lockdown appeared first on Dezeen.