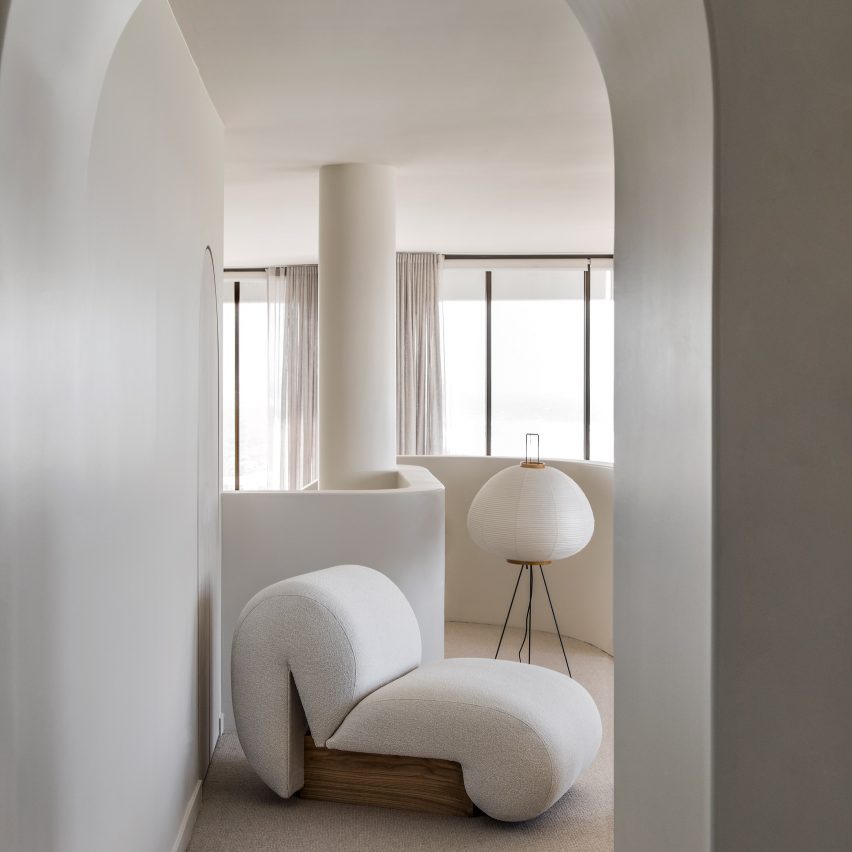 Penthouse M’s interior has been designed by CJH Studio to be a “complete juxtaposition” of the typically “ostentatious” homes seen around the city of Gold Coast. 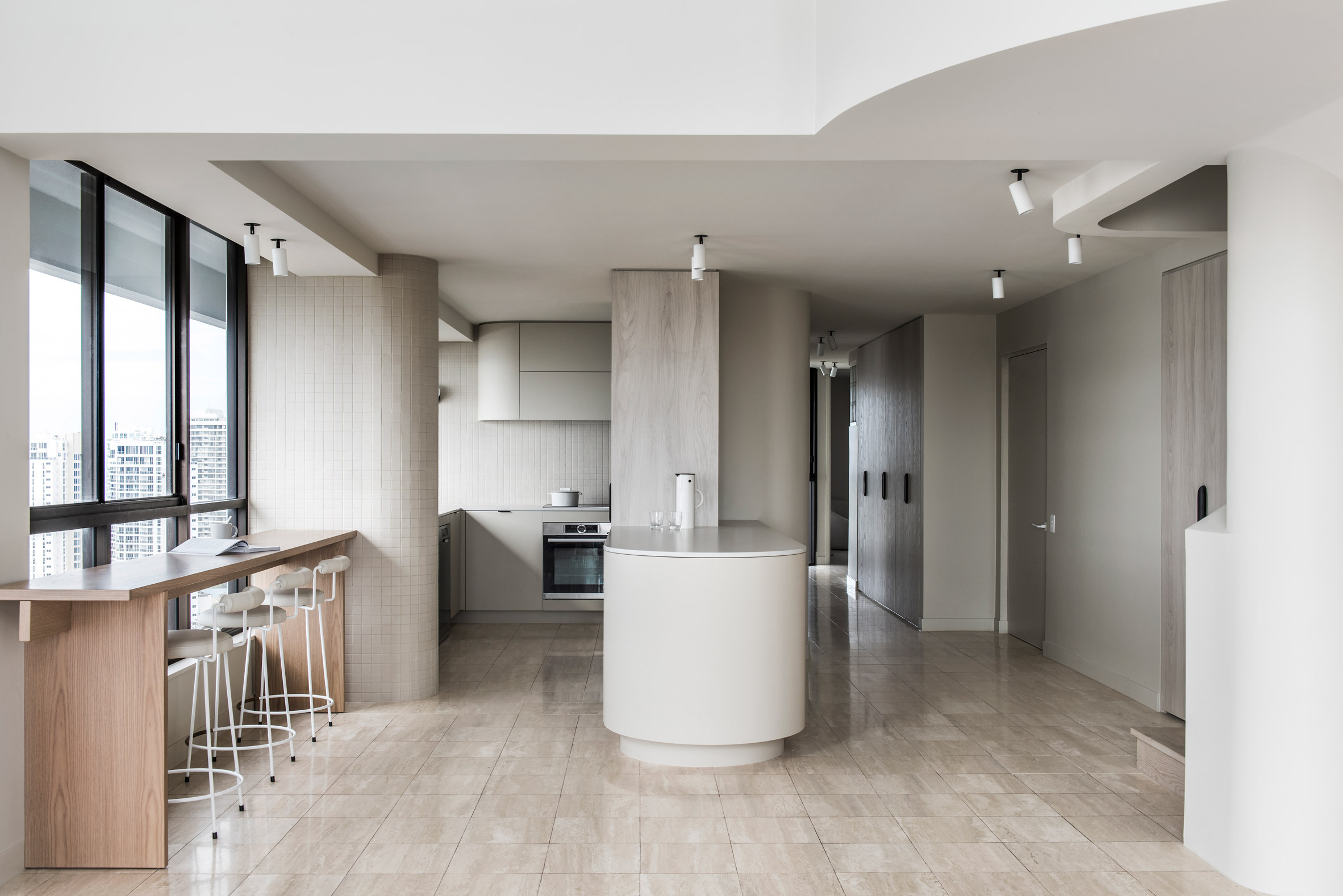 As it had gone largely untouched since it was initially built, the two-floor apartment featured a number of dated, 80s-inspired decor details like gold swan-shaped taps and an apricot-coloured bathtub.

There were some elements deemed worth saving, particularly the travertine marble flooring that ran throughout the lower living spaces. 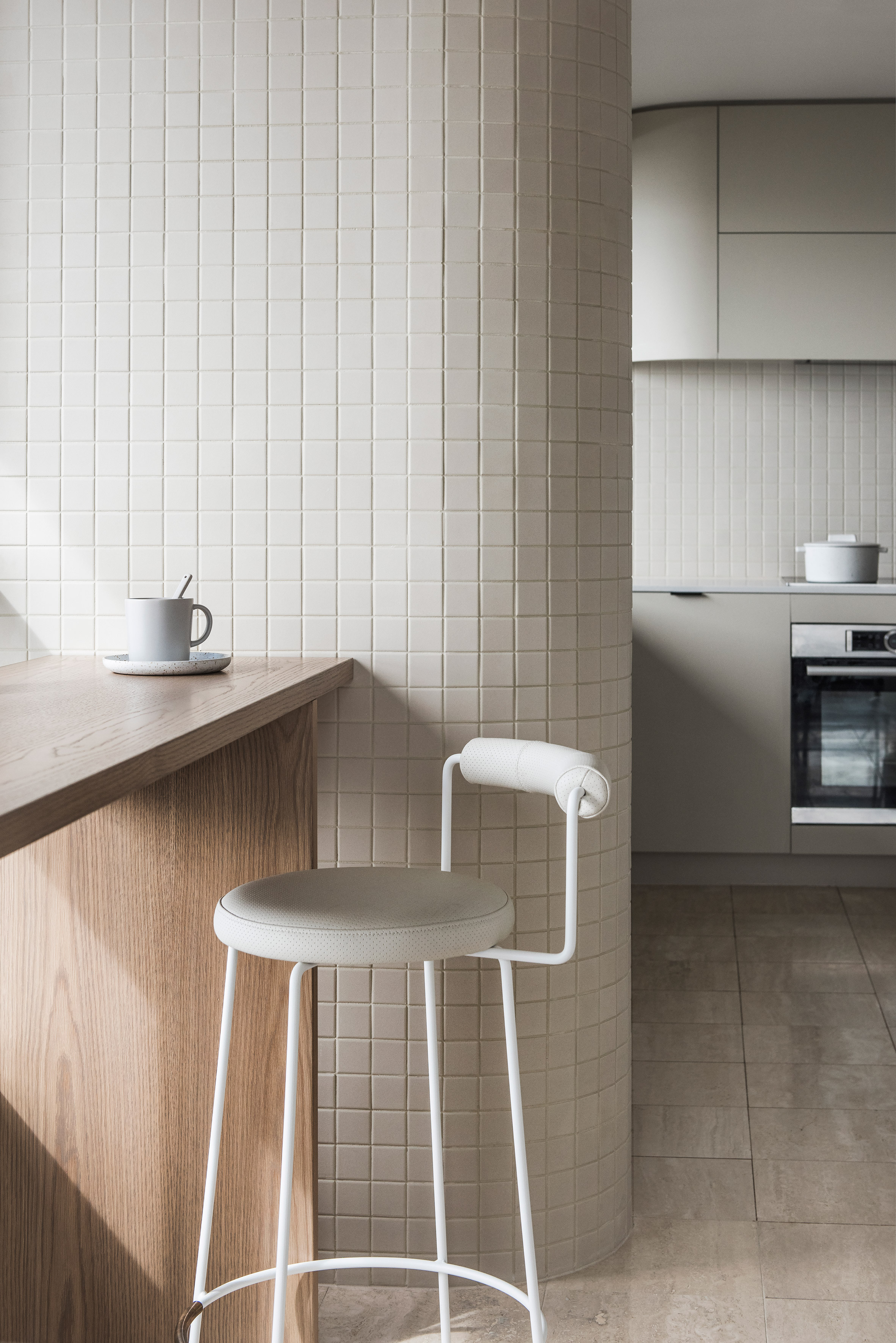 The studio worked out how to incorporate these into the more timeless fit-out that the new owners wanted.

It also wanted to reference other striking features of the apartment building like its curved facade and the glass-brick walls in the lobby. 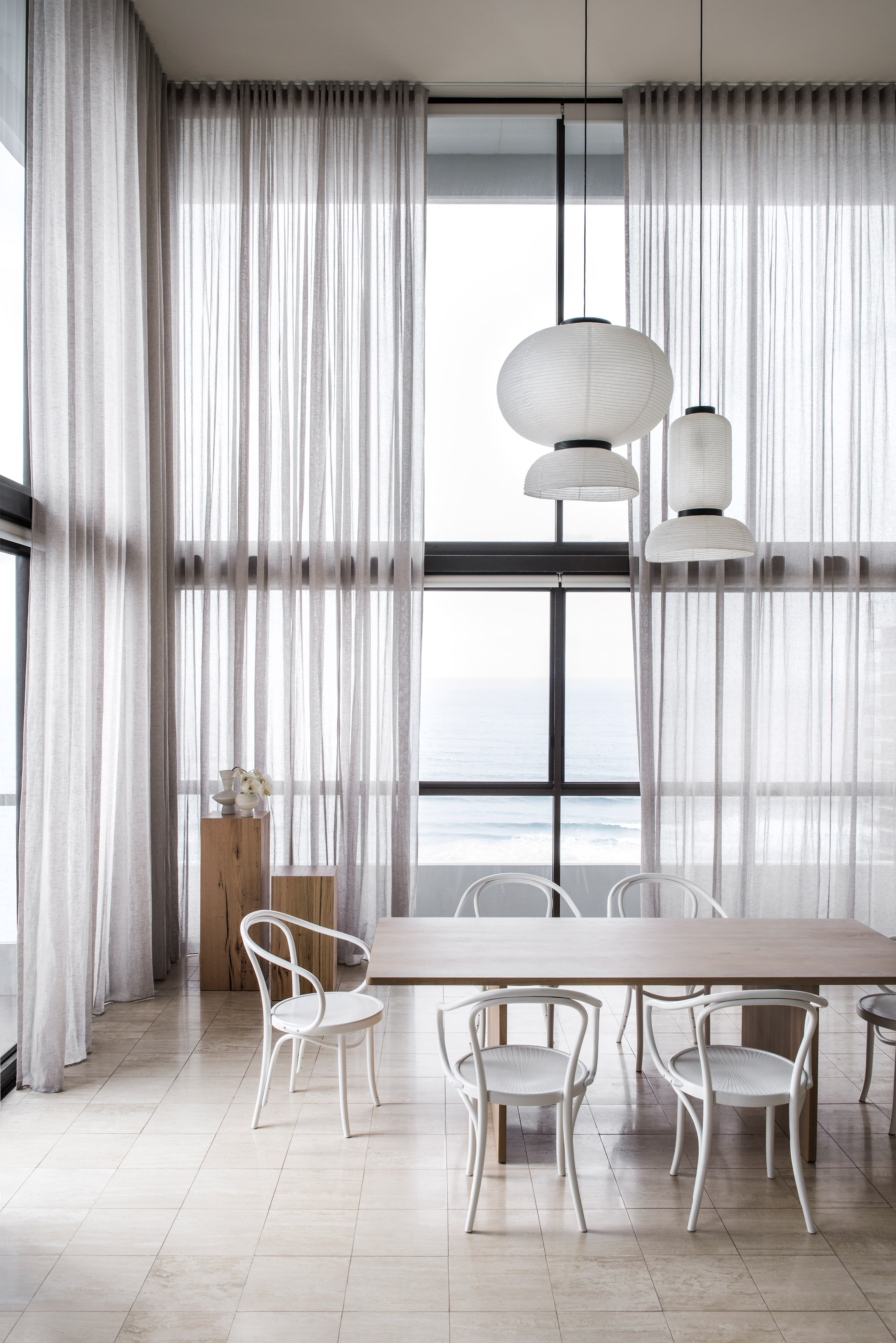 “The project’s design largely became a response to the beautiful existing space, the materiality of the original building and its curvaceous forms.” said the studio’s founder, Cassie James-Herrick.

“[The client] was also familiar with our minimal design approach, which aligned well with their own aesthetic preference,” she told Dezeen. 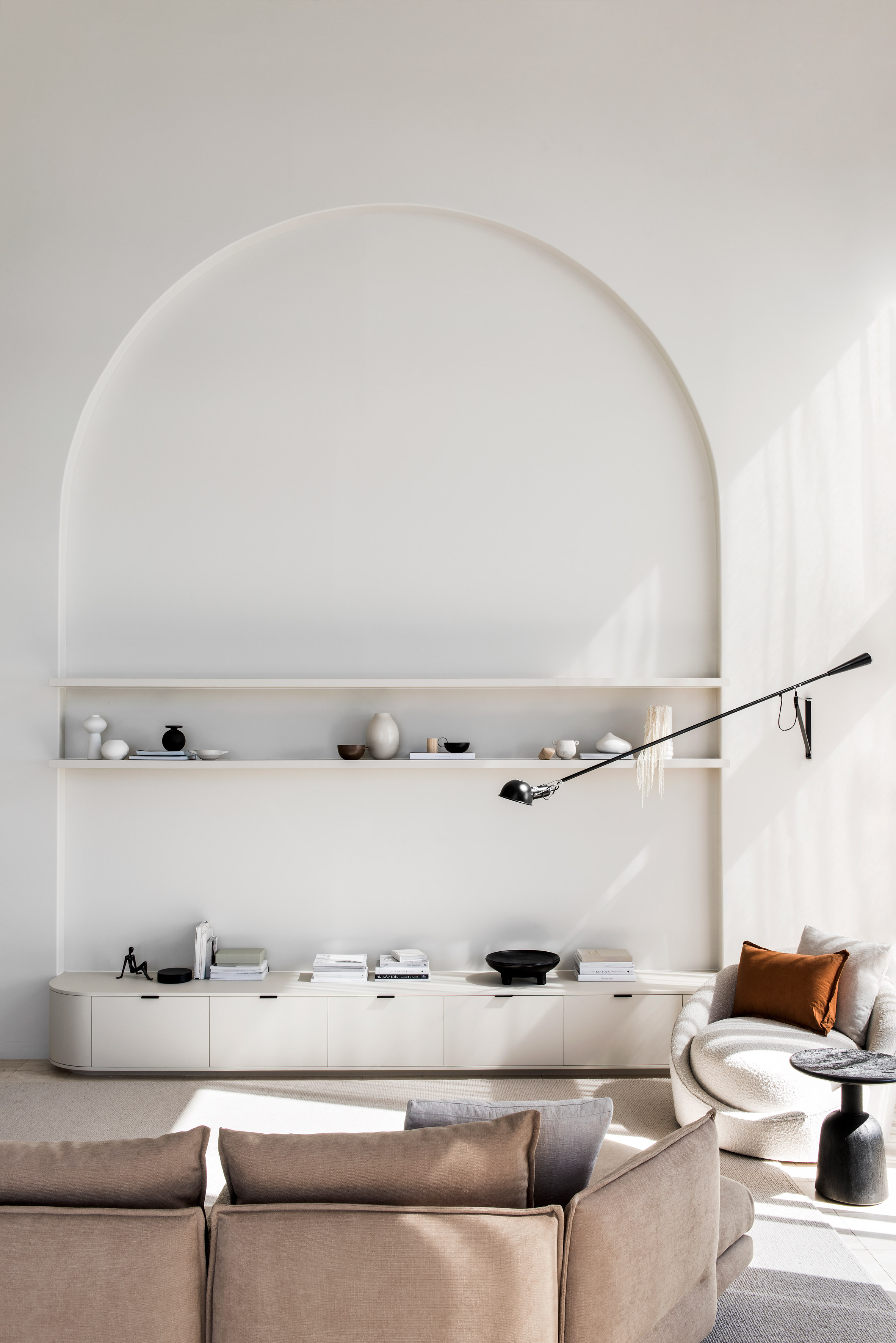 The previously awkward and angular kitchen has been made open-plan. It features a curved central island and extractor hood above the stove.

A rounded partition clad in light beige tiles has also been inserted to create some separation between the breakfast bar and the cabinetry. 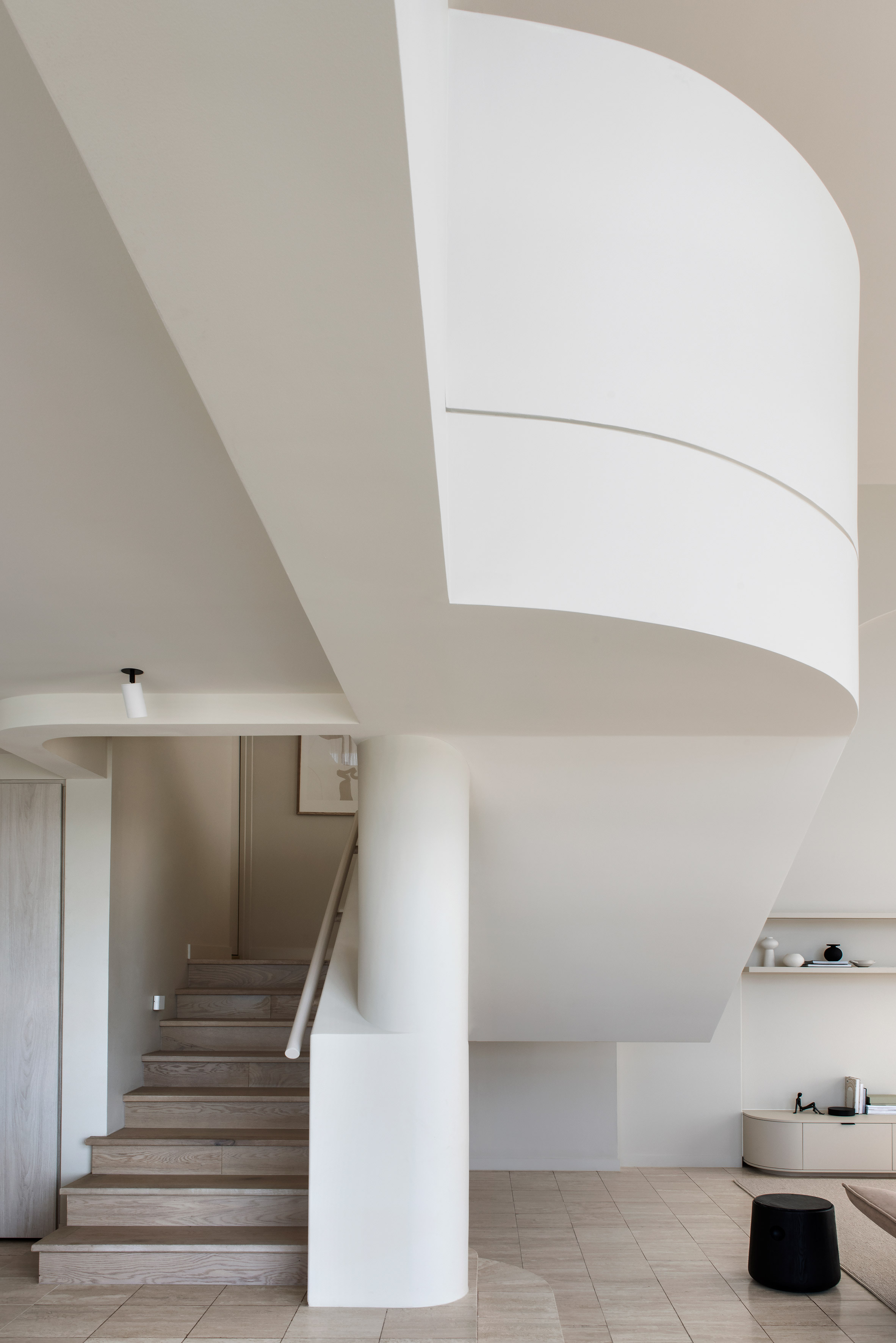 In the adjacent living area, there’s a wooden dining table surrounded by white tubular-frame chairs. Gauzy curtains have been hung in front of the full-height windows to screen the sun that streams in from the beach outside.

As evening falls inhabitants can switch on the two oversized lanterns that dangle from the ceiling. 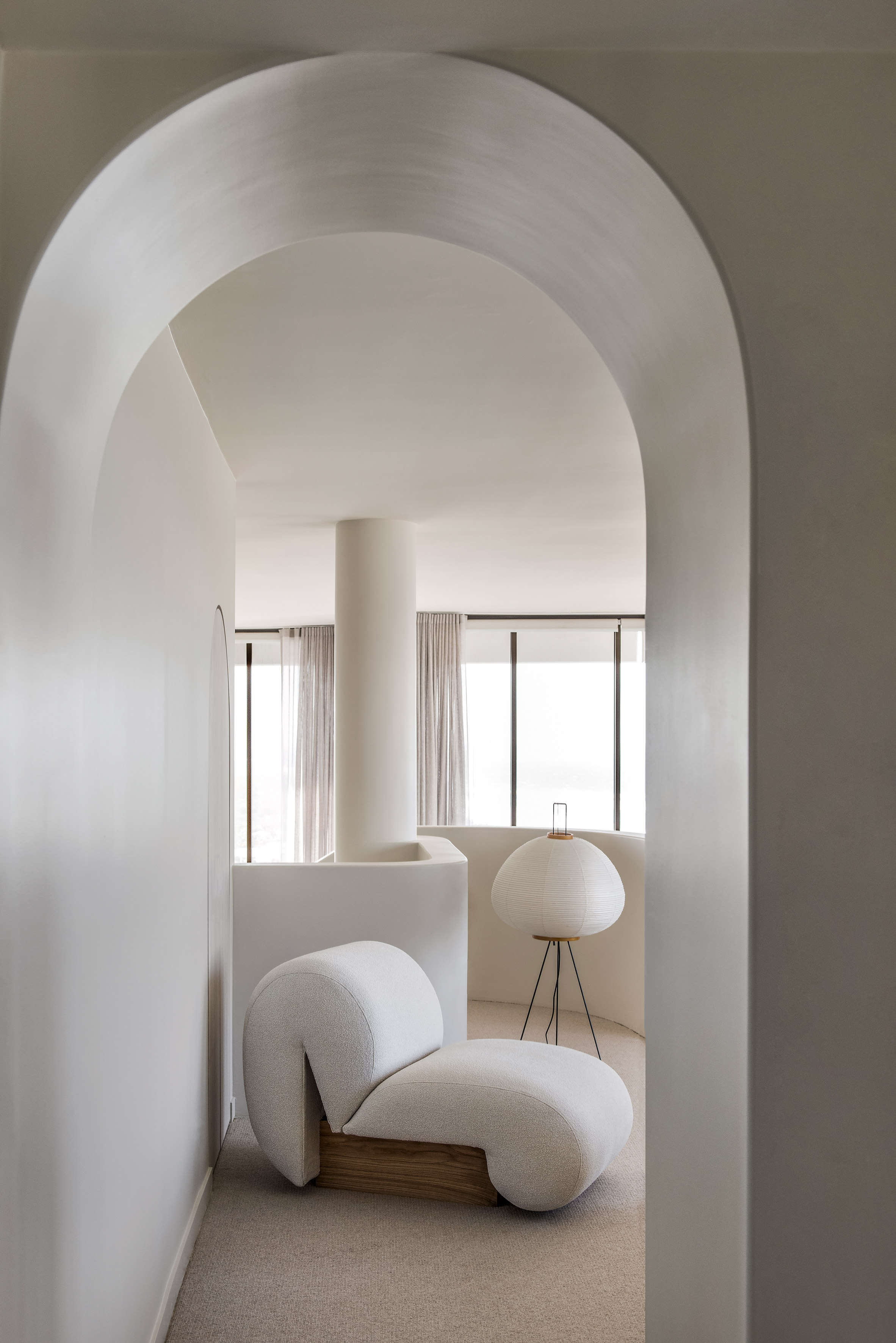 The rest of the space has been dressed with a couple of cosy armchairs upholstered in boucle and a long, taupe-coloured sofa.

It sits directly in front of an arched niche in the rear wall which accommodates a shelf and curved sideboard where ornaments can be displayed. 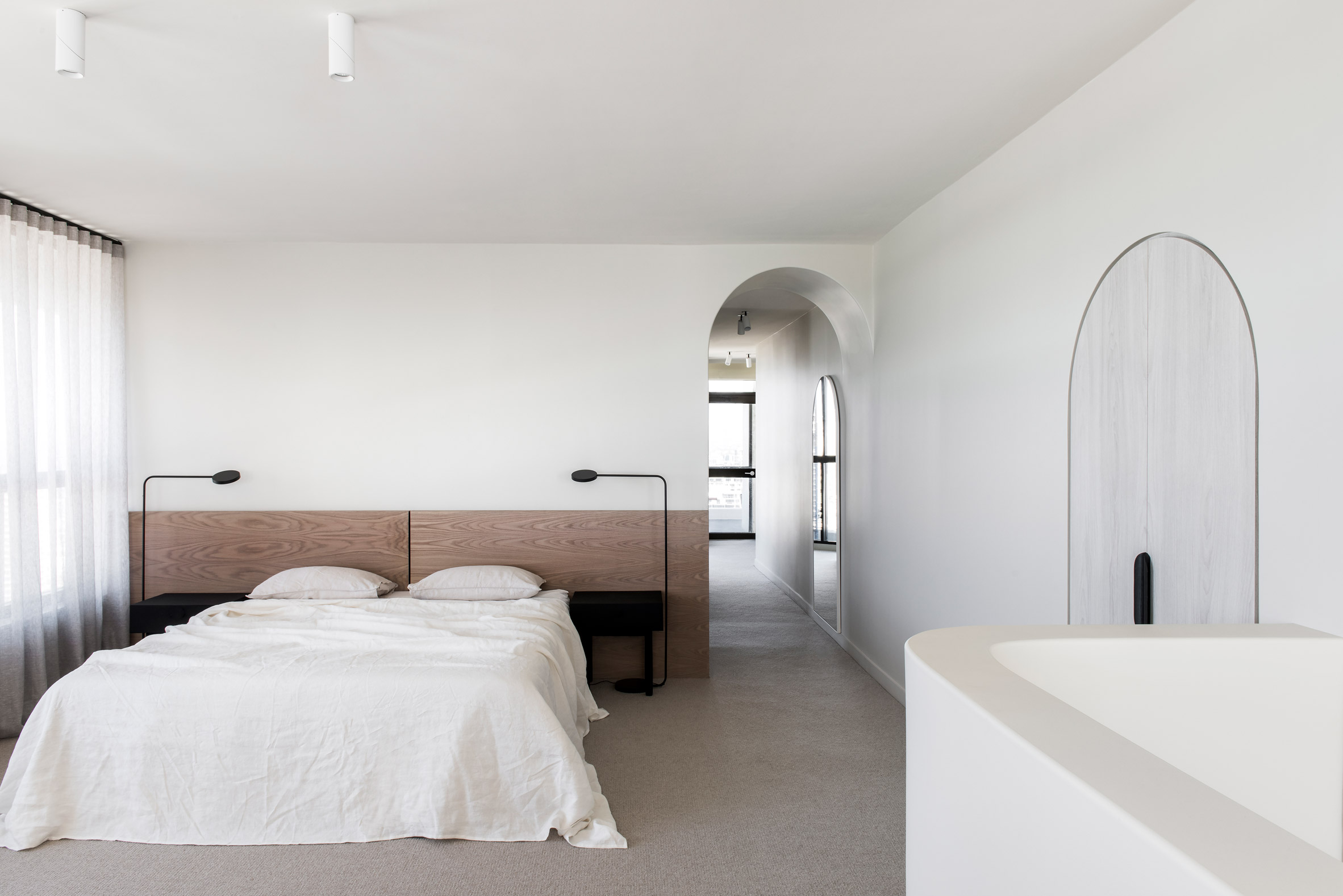 The travertine marble floor tiles in Penthouse M were carefully restored, but the original staircase has been given a major update.

To make it safer for the clients, who have a young child, the studio has boxed-in the previously open treads with American oakwood.

The old faceted glass balustrade has been replaced with a gently curving panel of creamy plaster. 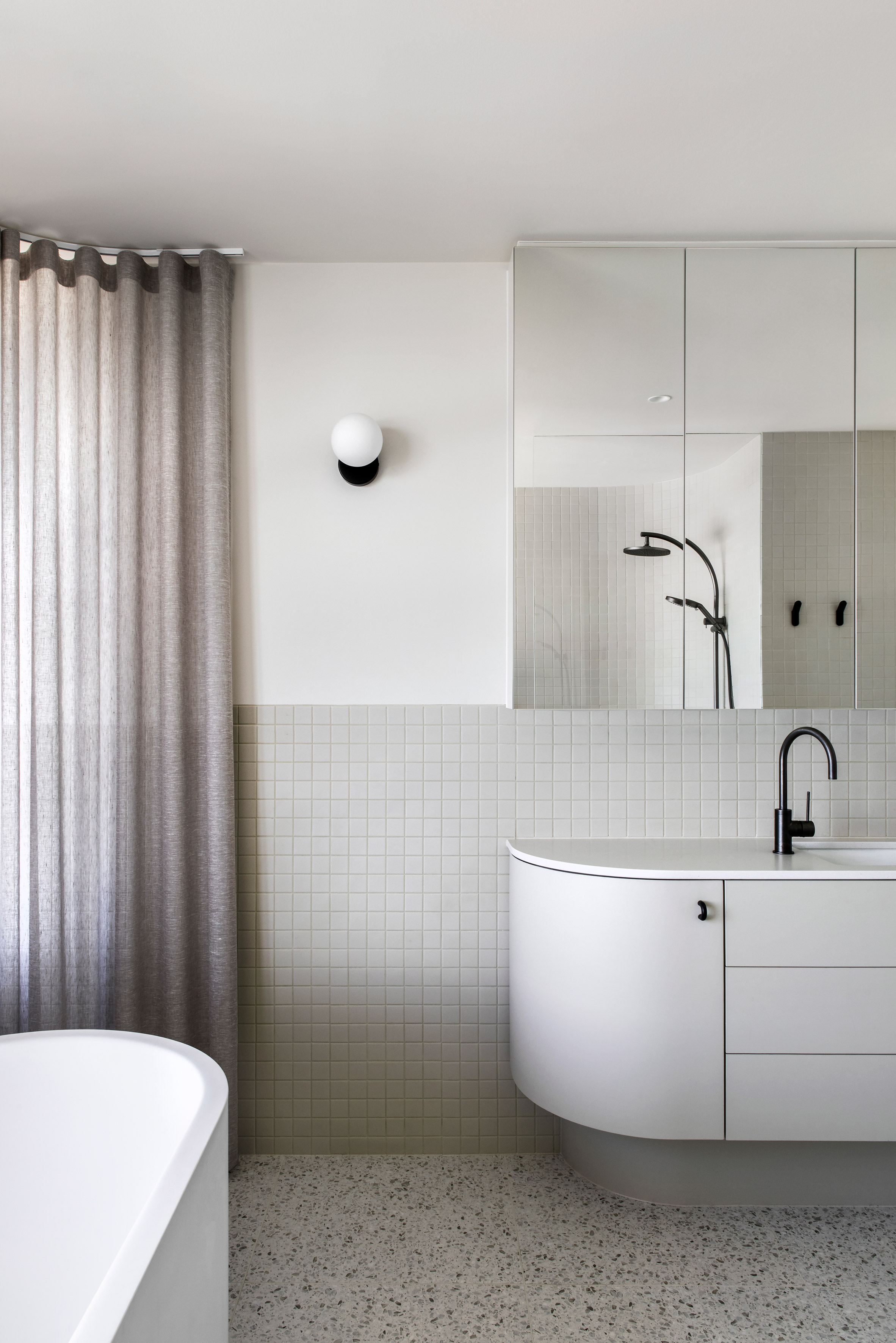 Curvy forms continue to appear in the living spaces upstairs – bedrooms are accessed via vaulted doorways and have arched full-length mirrors.

The same beige tiles used in the kitchen have been applied across walls in the home’s wet areas, complemented by flecked terrazzo-style flooring. 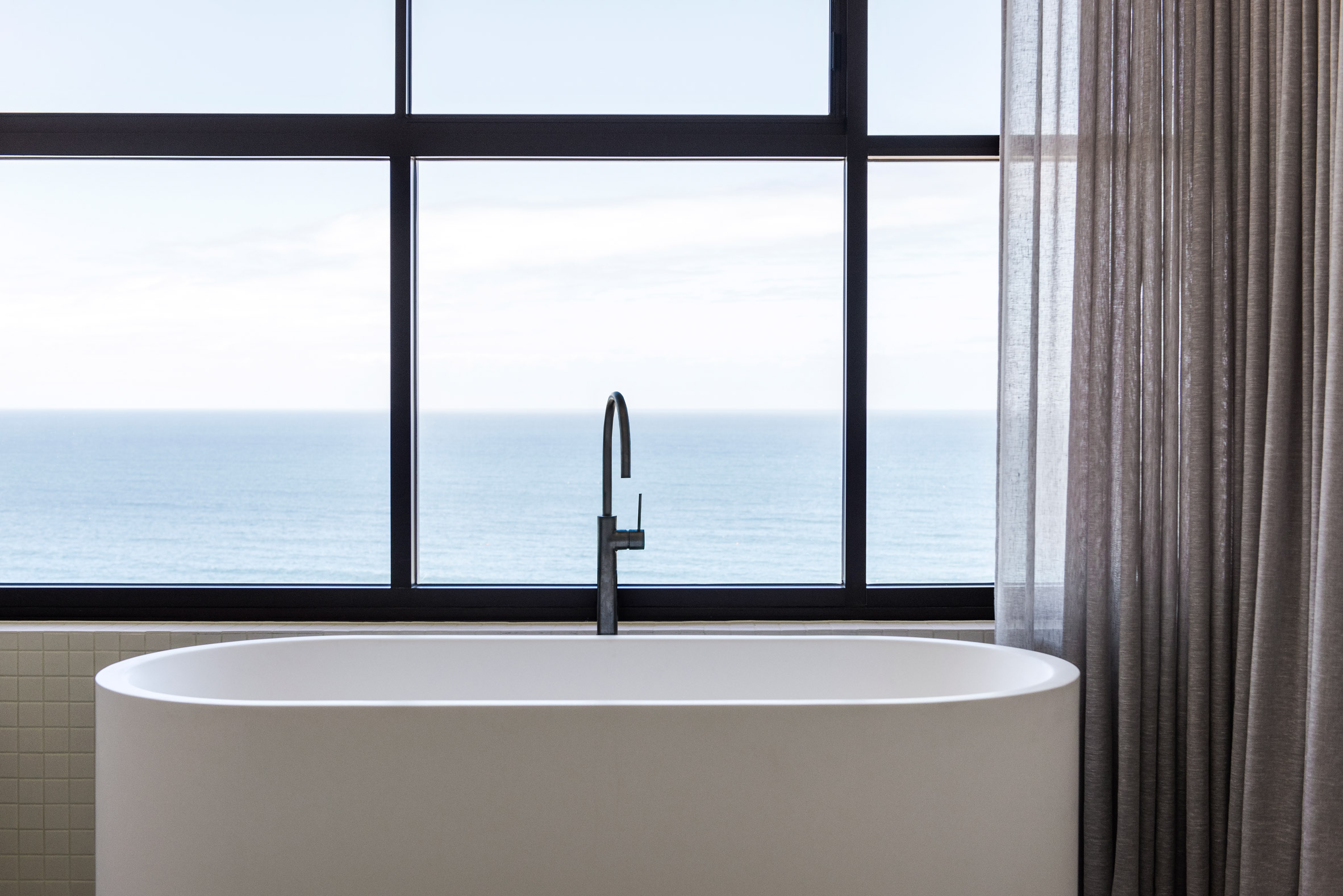 In one bathroom, a freestanding tub has been positioned directly beside an expansive window that overlooks the ocean waves, while in another the shower cubicle has been inset with glass bricks – a subtle nod to the building’s lobby. 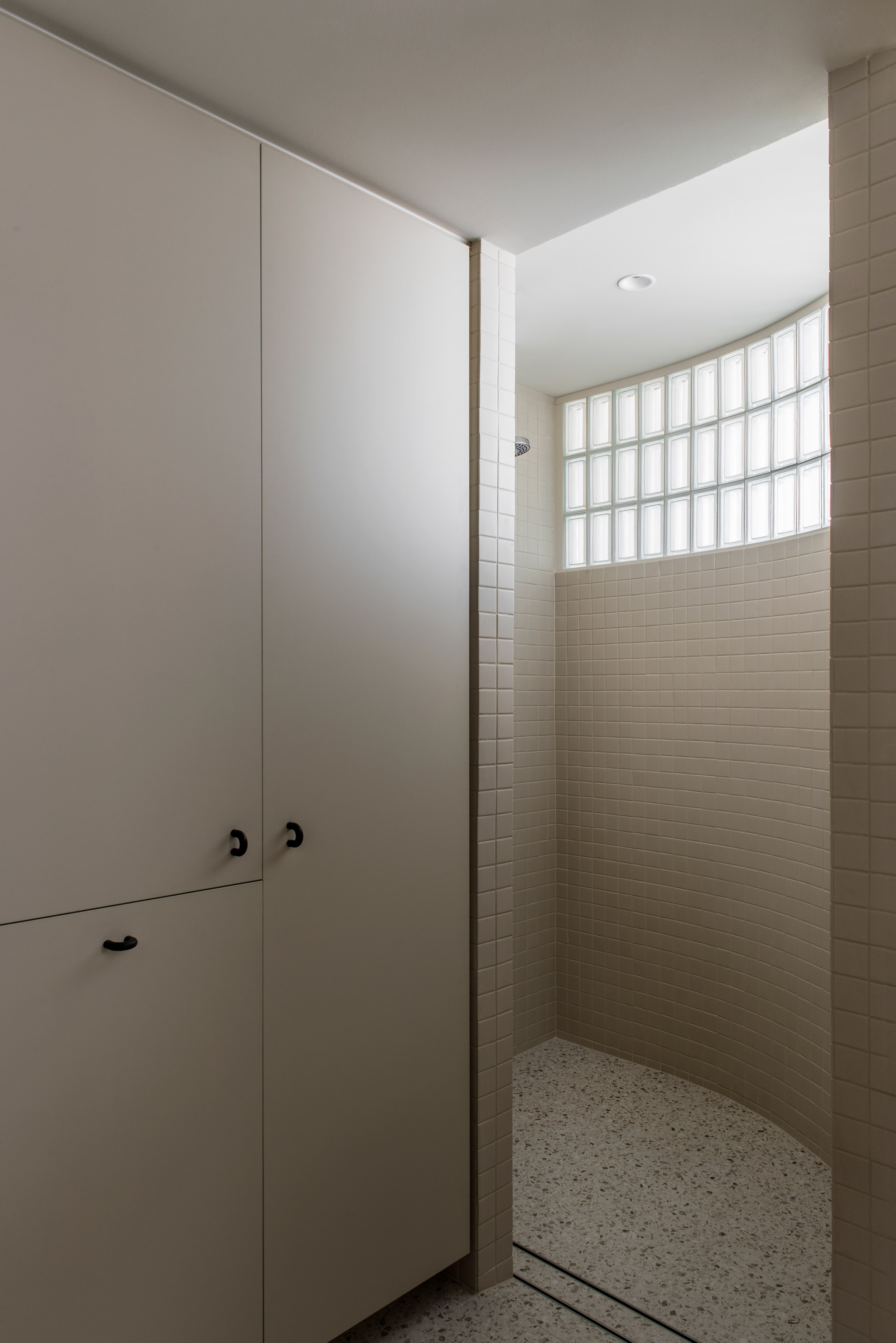 CJH Studio was established in 2017 and has an office on Melbourne’s Mornington Peninsula. It isn’t the only studio to forgo flashy glamour – last year, Worrell Yeung completed a minimal penthouse in Brooklyn that has all-white walls and pale marble fixtures.

A top-floor apartment in Antwerp designed by Hans Verstuyft Architects is also decked out in a restrained material palette of walnut wood and stone.

Photography is by Cathy Schusler.