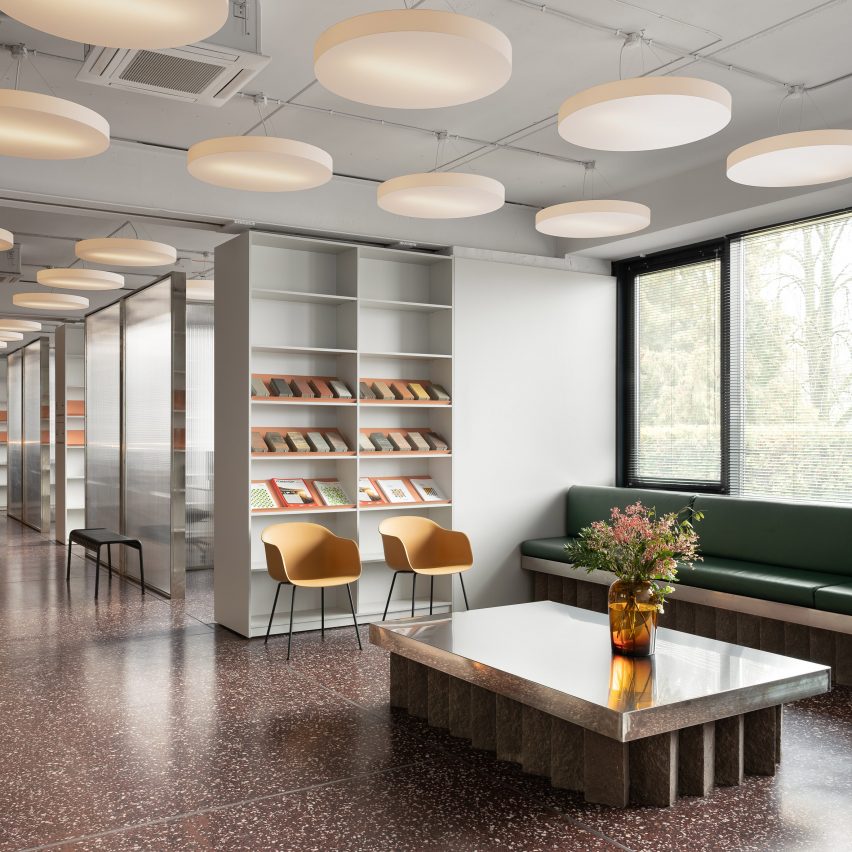 Creative duo Artem Trigubchak and Lera Brumina used concrete slabs, sand and paving stones to fashion the furnishings and partition walls inside this office in Kyiv.

Designed for a Ukrainian developer and building materials company called Kovalska, the 1,120-square-metre office is spread across two floors of a Soviet-era factory in the industrial district of Obolon.

The lower floor is dedicated to sales and includes a reception area, product library, small office and kitchen, while the upper floor houses private offices and meeting rooms for the company’s internal departments. 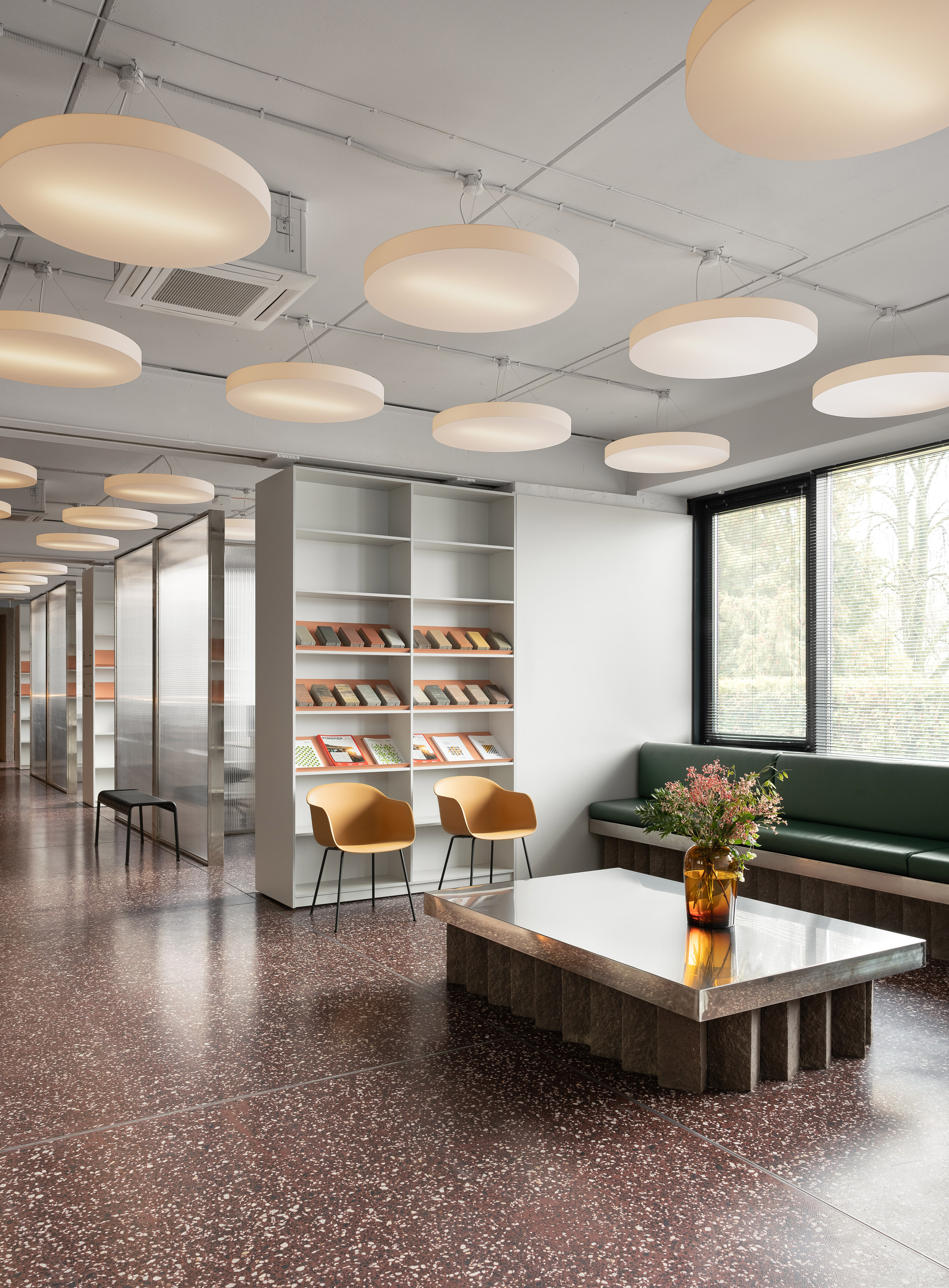 The pair also explained that the monumental mosaic panel that features on the factory’s facade, as well as the large proportions of the building, served as a large source of inspiration for the project. 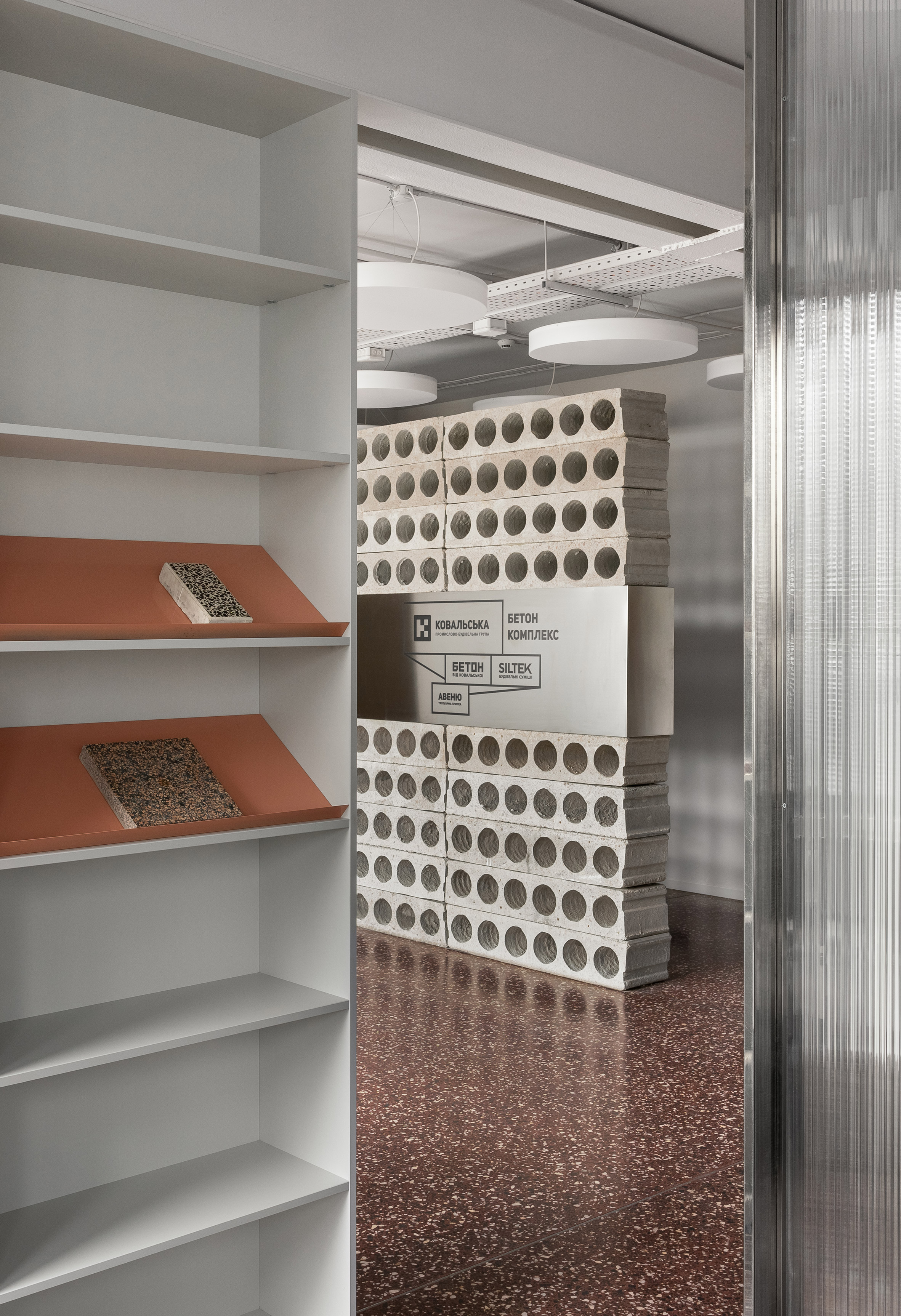 “We are endlessly inspired and love the architecture of the Soviet period, and we really wanted to create a comfortable working space without violating the architectural context,” they explained.

“Working with the materials that were available to us for this project, we tried to connect all the colours in a harmonious story with the old facade of the building, which is decorated with mosaics.” 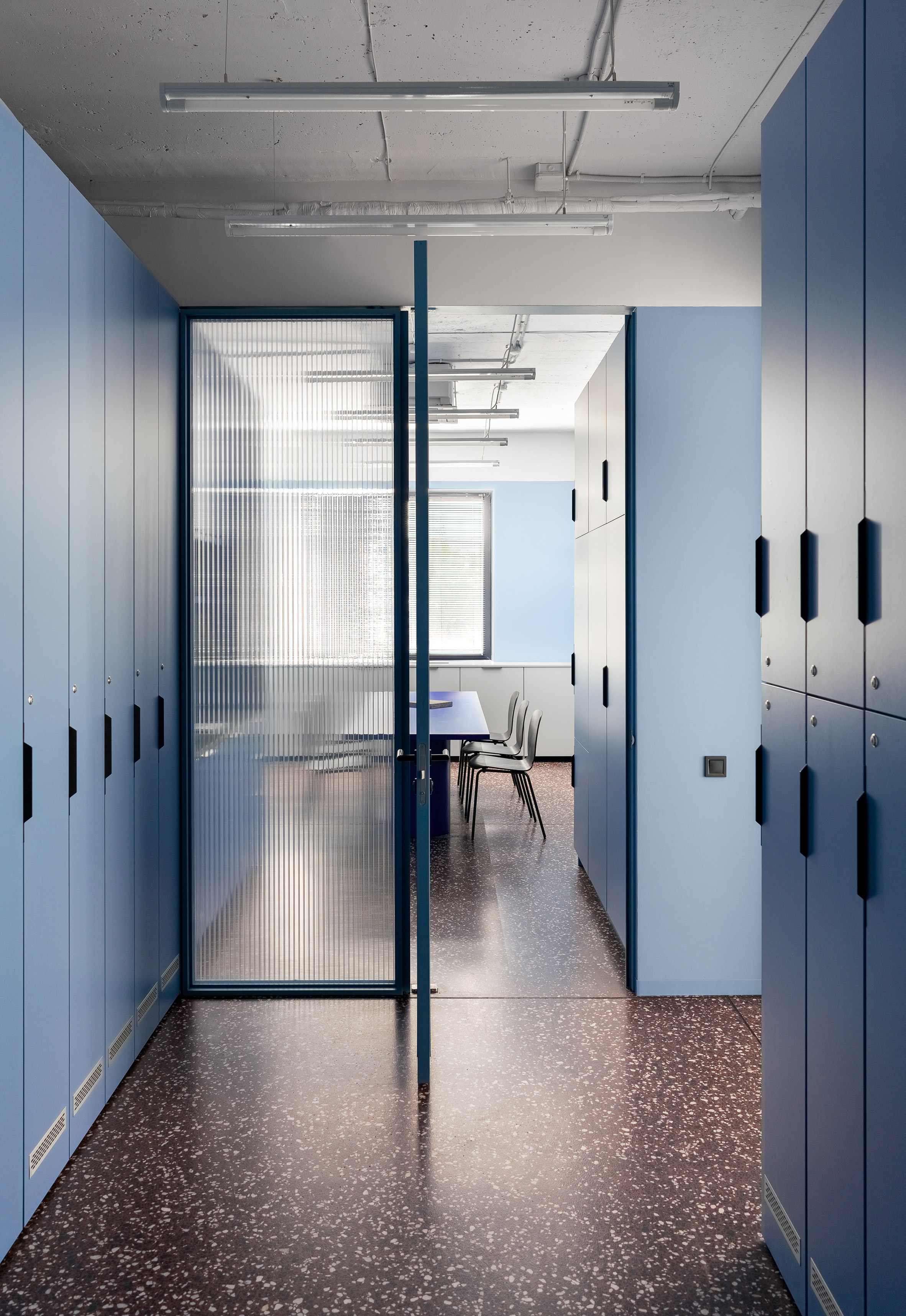 As the largest manufacturer of building materials in Ukraine, a large number of Kovalska’s own materials and products are integrated into the office’s interior.

These include the hole-punctured concrete slabs that make up a partition in the reception waiting area and the paving stones which have been used to make the base of a bench seat and table.

The burgundy-coloured terrazzo tiles used throughout the lower floor were also developed by the company especially for this project. 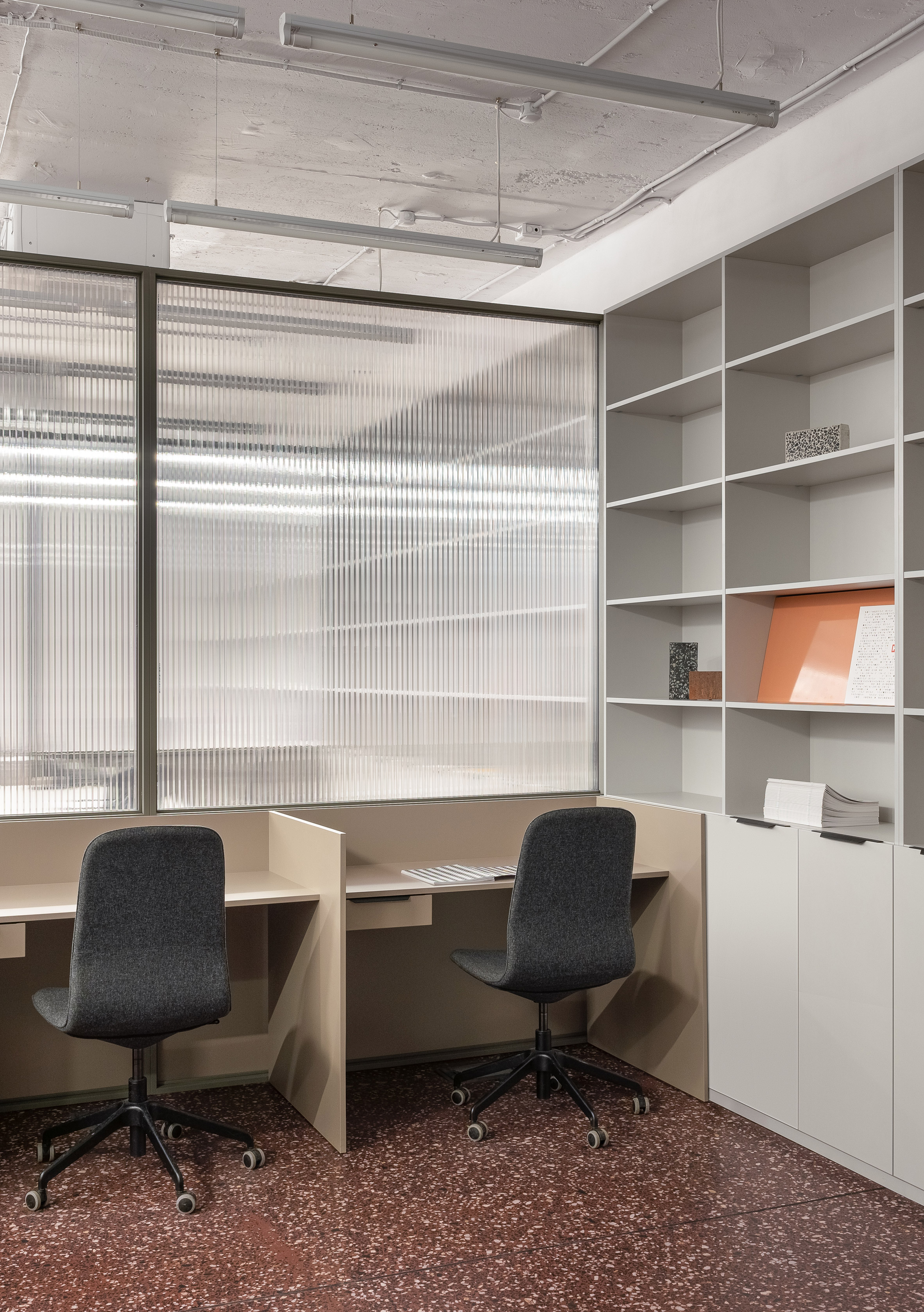 On the upper floor, sky-blue linoleum covers the floor instead. A mixture of marble chips sand has then been used to create a textured surface finish on some of the walls.

Rooms across both floors are also divided by reeded glass partitions that extend all the way up to the ceiling. These allow daylight to filter into all areas of the space and create a sense of openness. 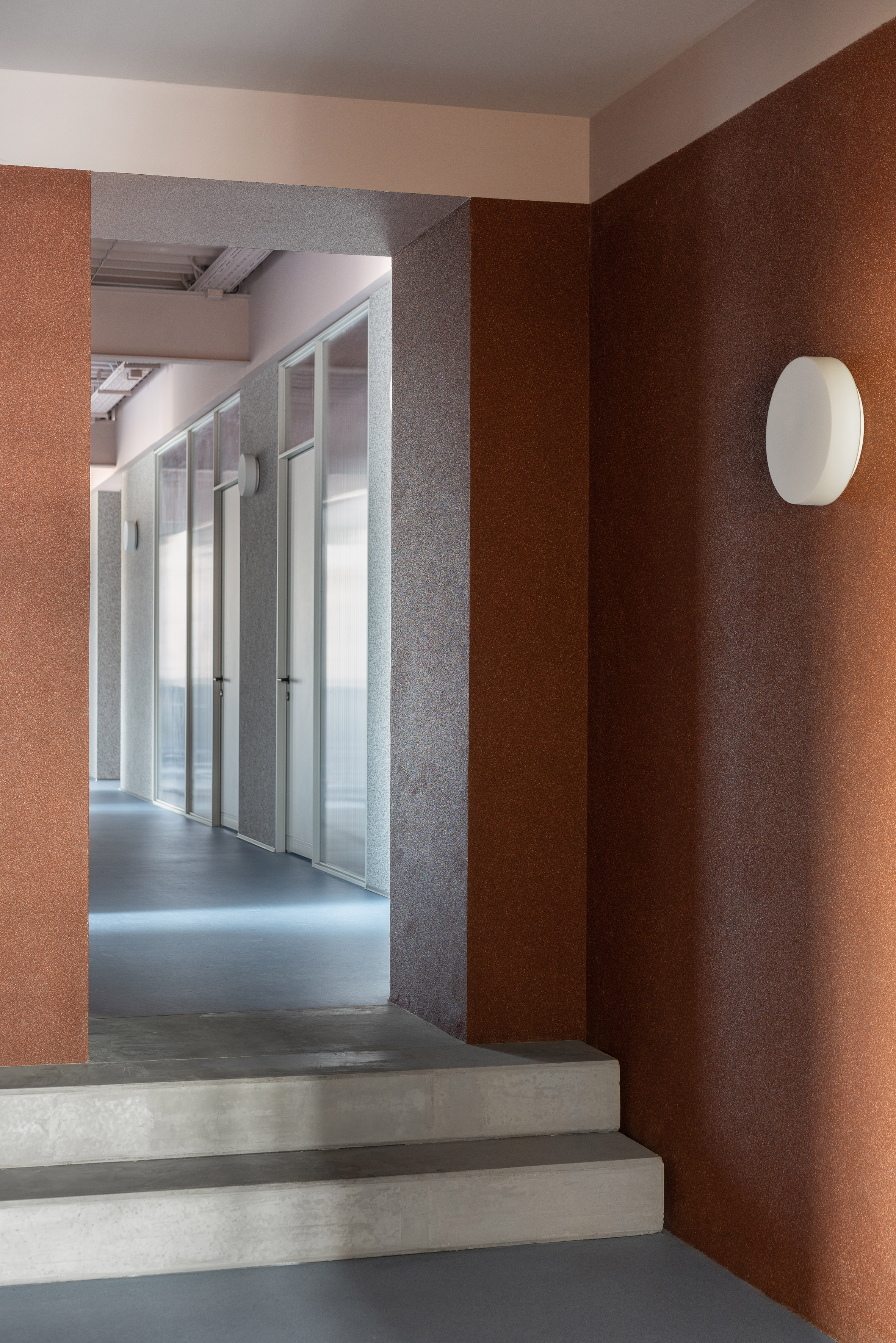 Most of the pieces of furniture, as well as the lighting system, are bespoke and were designed by Trigubchak and Brumina themselves.

For instance, a series of tables with MDF countertops and chunky cylindrical bases were made for the meeting rooms and the kitchen. Some of the tables are forest green or cobalt blue, while others are cherry red. 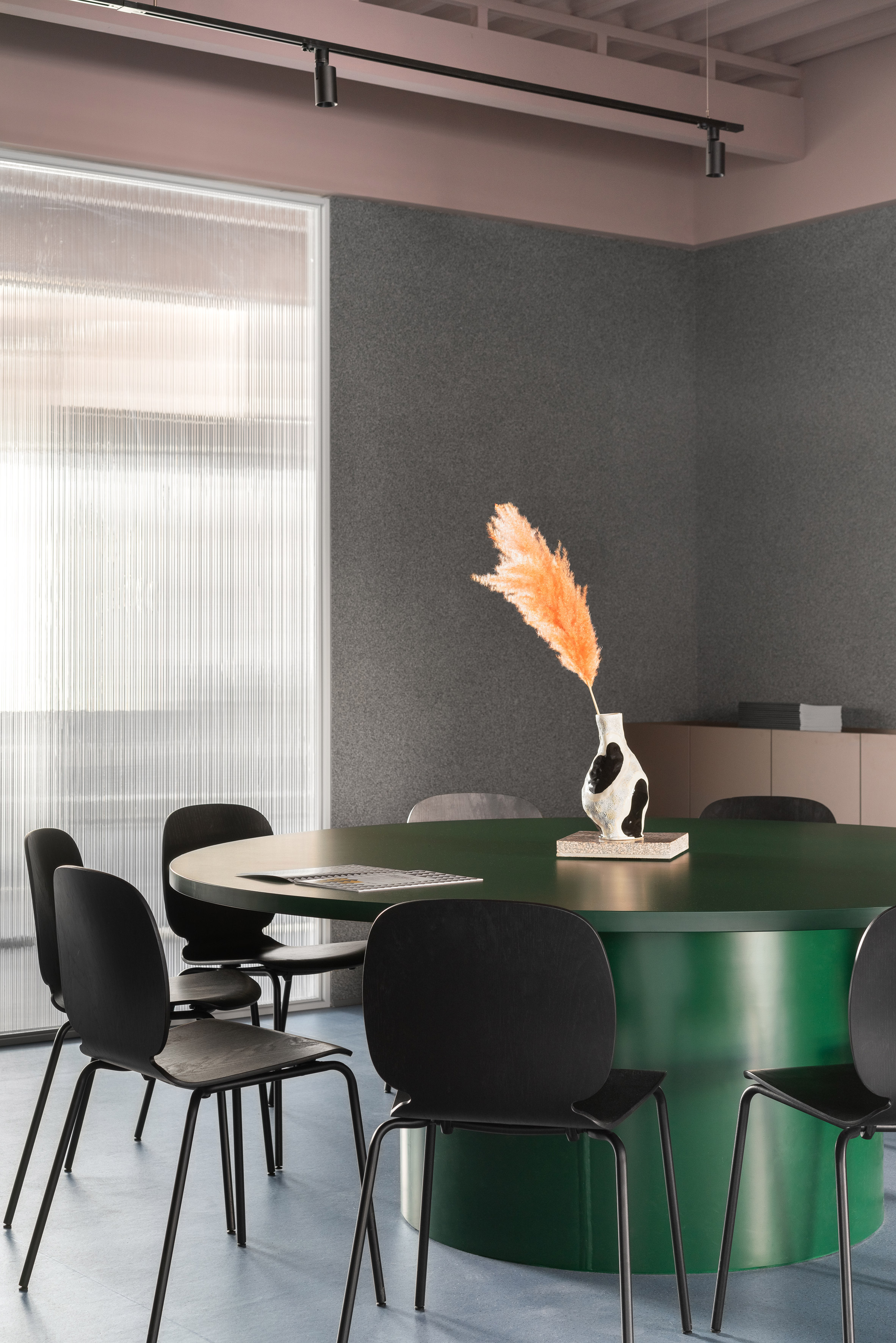 The lighting system that runs across the ceiling of the reception area and sales office comprises rows of large circular lamps.

Trigubchak and Brumina specifically designed it to mimic the lighting arrangement in the newspaper office featured in director David Fincher’s mystery-thriller film, Zodiac.

“[The lights] shine with very warm diffused light, creating a contrast with the restrained and strict shades and materials,” Brumina added. 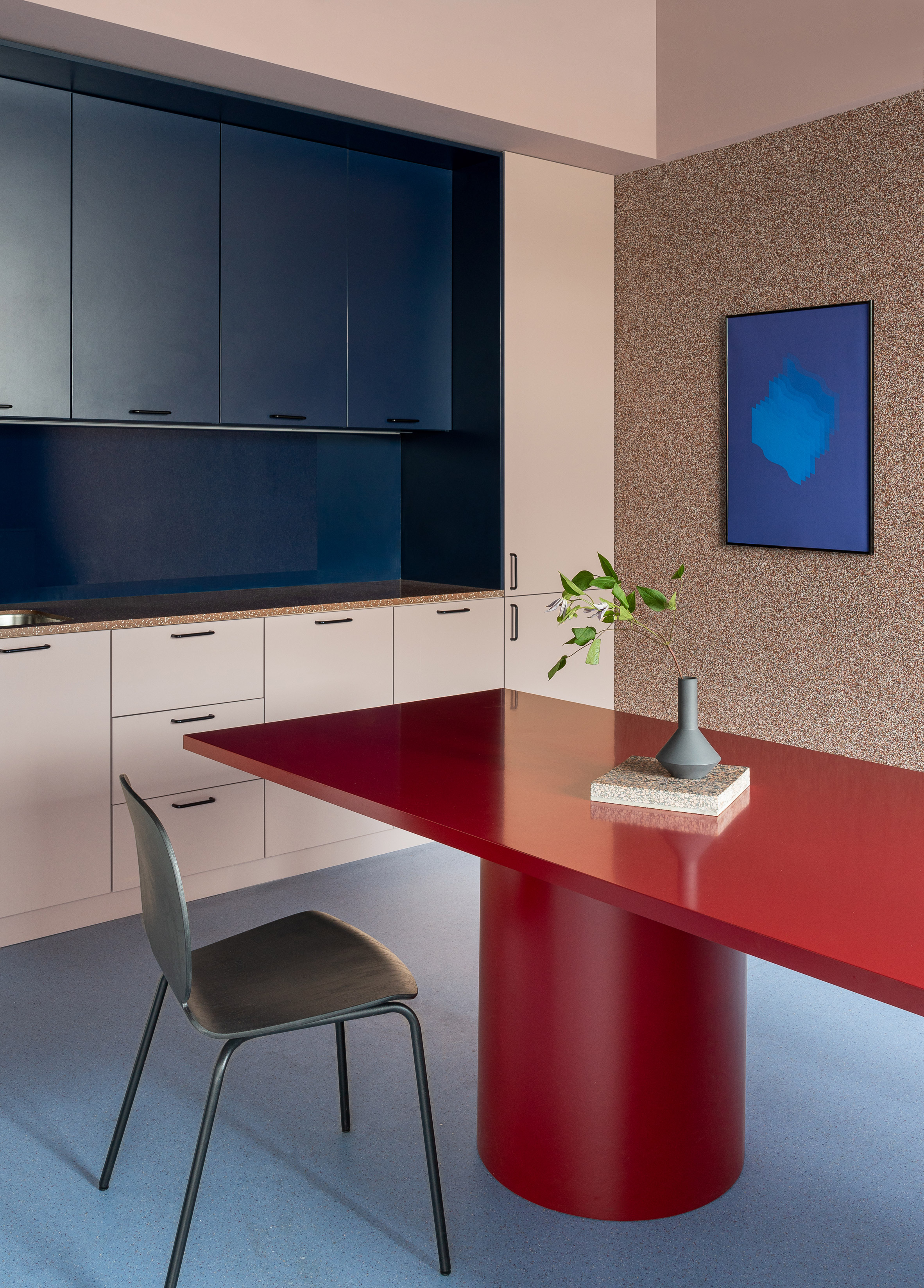 This marks the second time that Artem Trigubchak and Lera Brumina have worked together – back in 2018, the two designed sugary pink interiors for a cafe and bakery in the Ukrainian city of Odessa.

Their Kovalska office isn’t the only interiors project to inventively integrate client products. In Tawain, Waterform Design created a workspace for a gas provider using reclaimed gas cylinders from the company’s factory to make table legs and plant pots.

Photography is by Dmitrii Tsyrenshchikov.

The post Kovalska office in Kyiv is decked out with humble building materials appeared first on Dezeen.