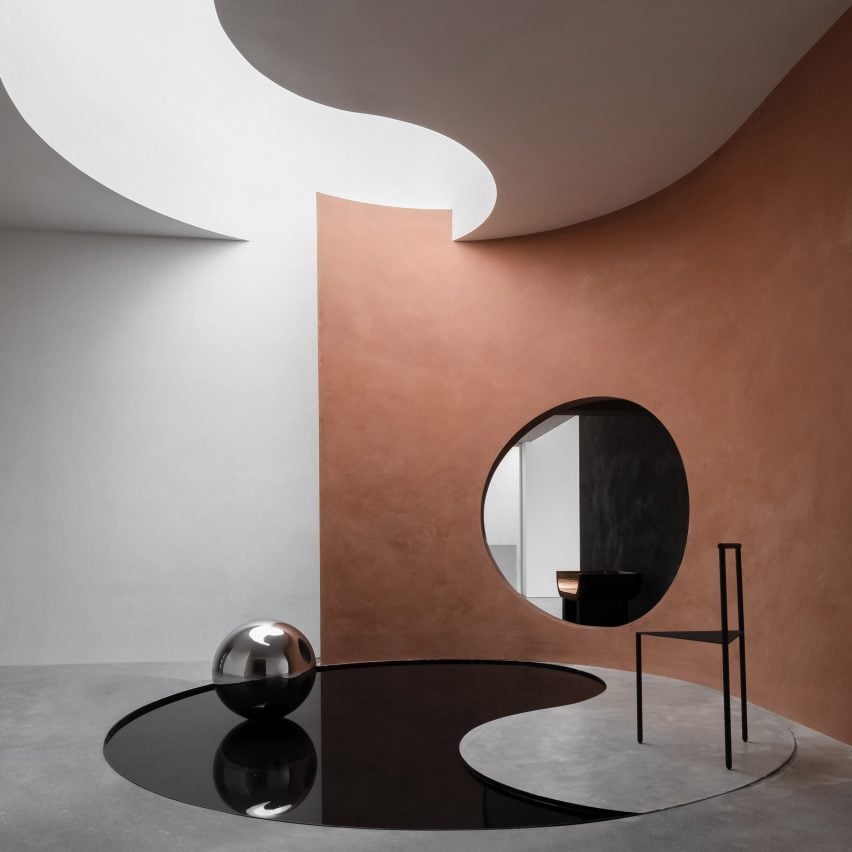 The ancient concept of yin and yang informed the serene aesthetic of this paint showroom in eastern China designed by JG Phoenix.

Located in the city of Shantou, the Danilo paint showroom has been designed by JG Phoenix to encourage visitors to “explore, reflect and encounter”. 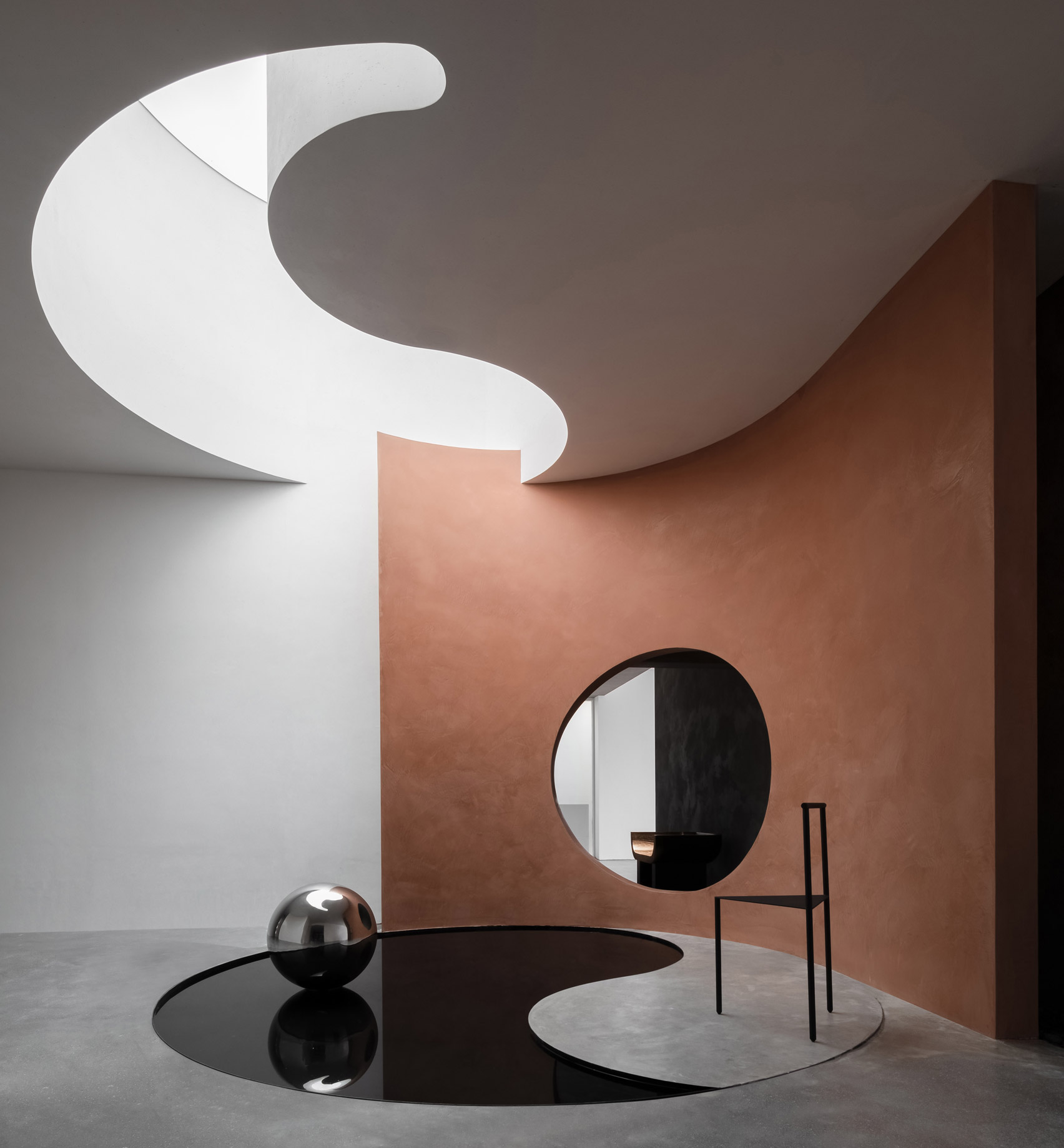 A key point of reference for the studio was the ancient Chinese philosophy of yin and yang, which is based on the idea that opposing forces in the natural world can actually be complementary or interconnected.

The studio also felt that the dual forces of yin and yang nodded to the idea that paint, in its most basic form, can be made from just two elements – water and soil. Visitors access the showroom via a long, sloping corridor that has been entirely covered with Danilo’s white paint.

“It takes people away from the outside world for a while and leads to a journey of art,” explained the studio. 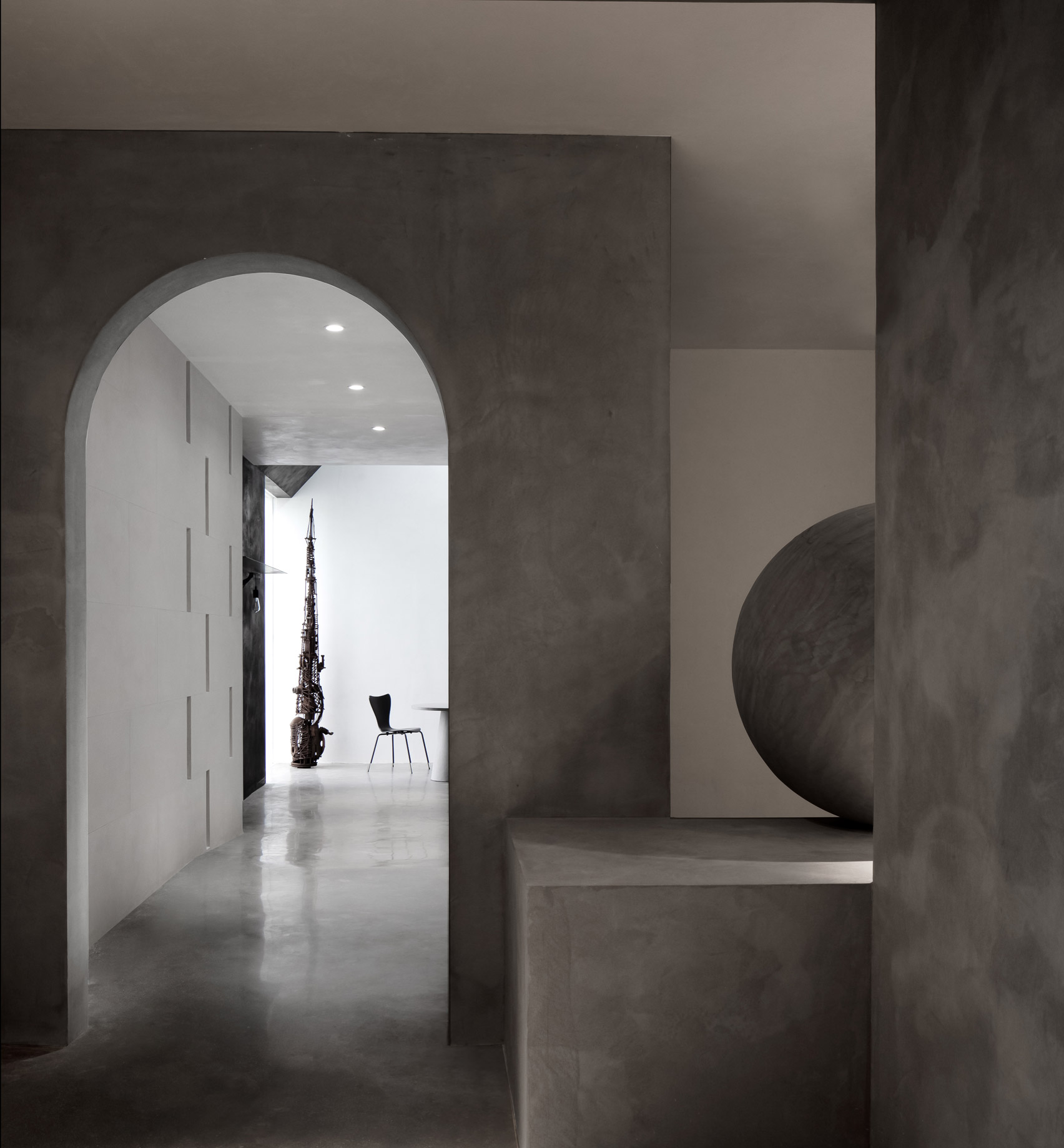 They’re led to a dramatic entrance hall which is anchored by a curved terracotta partition.

It’s punctuated with a large hole that offers glimpses of the main salesroom. 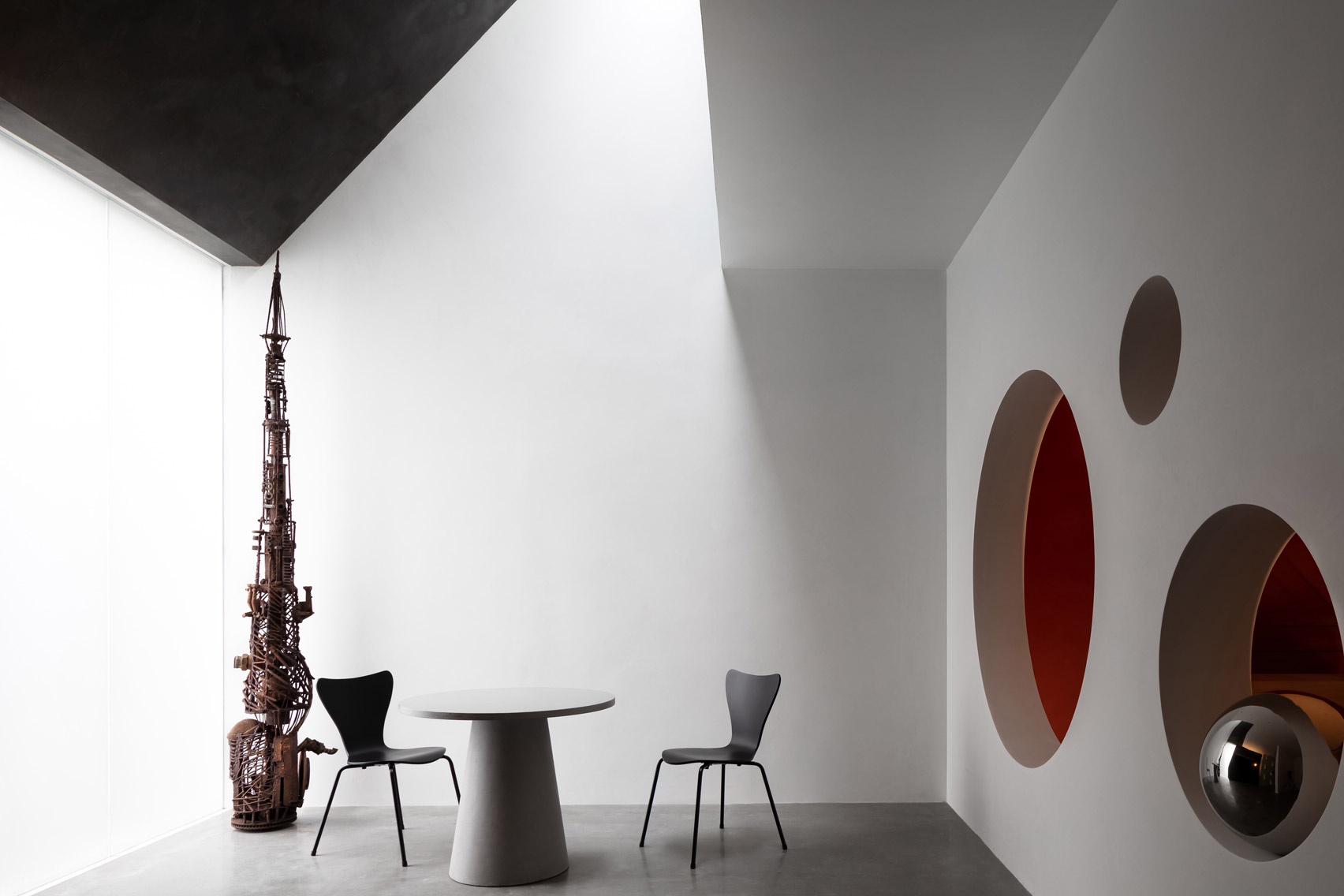 A traditional yin and yang symbol has been embedded in the floor – half of it has been lowered and filled with water to form a shallow, rippling pool.

The shape of the yin and yang symbol is echoed by the curved opening that’s been created in the ceiling, and the steel sphere that seems to balance on the surface of the pool. 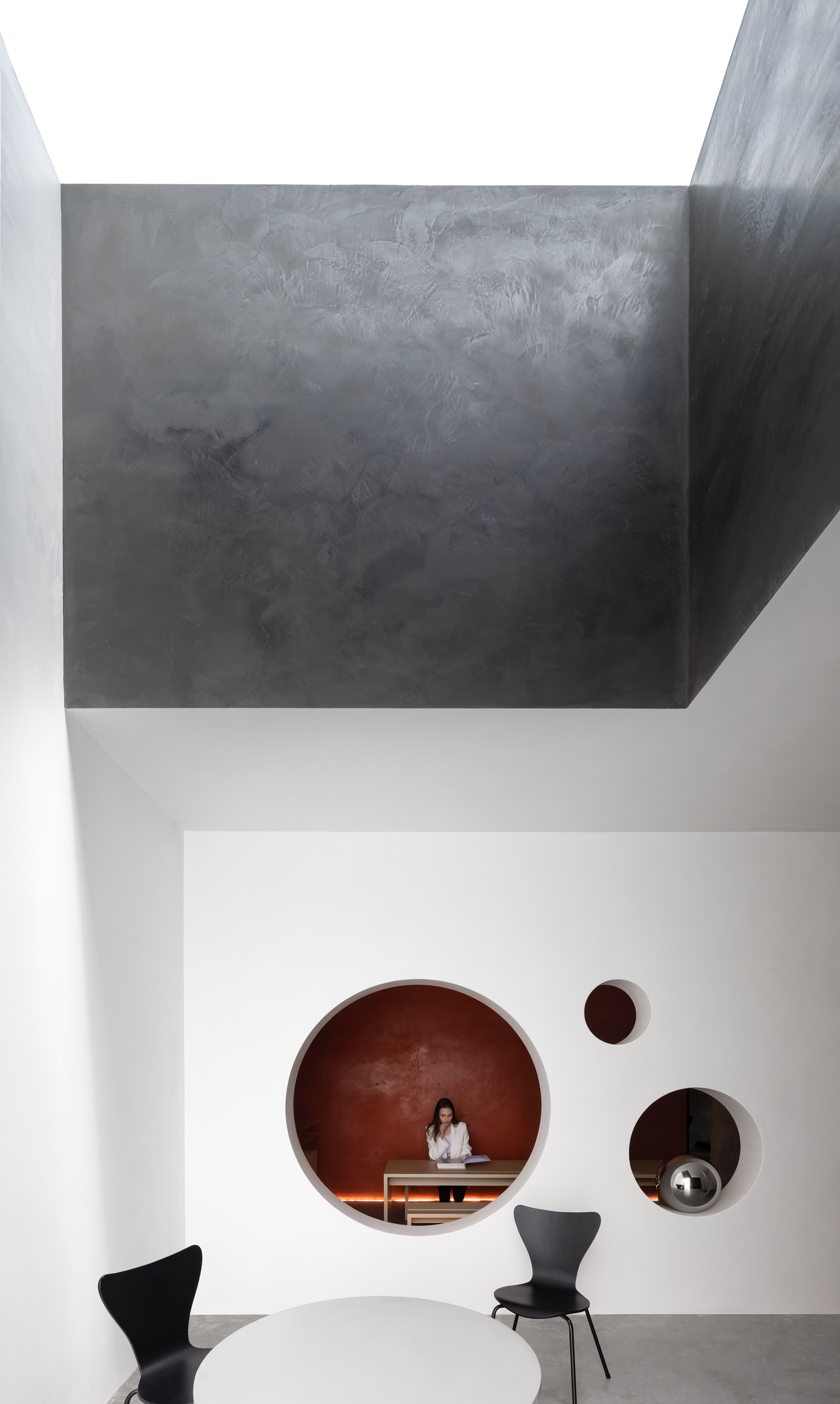 An adjacent room where customers can sit and chat with staff about their paint choices has been completed with simple black, white and grey surfaces.

The space becomes animated over the course of the day as shards of light shine through a narrow skylight in the roof.

An art piece made from disused mechanical parts has also been placed in the corner. 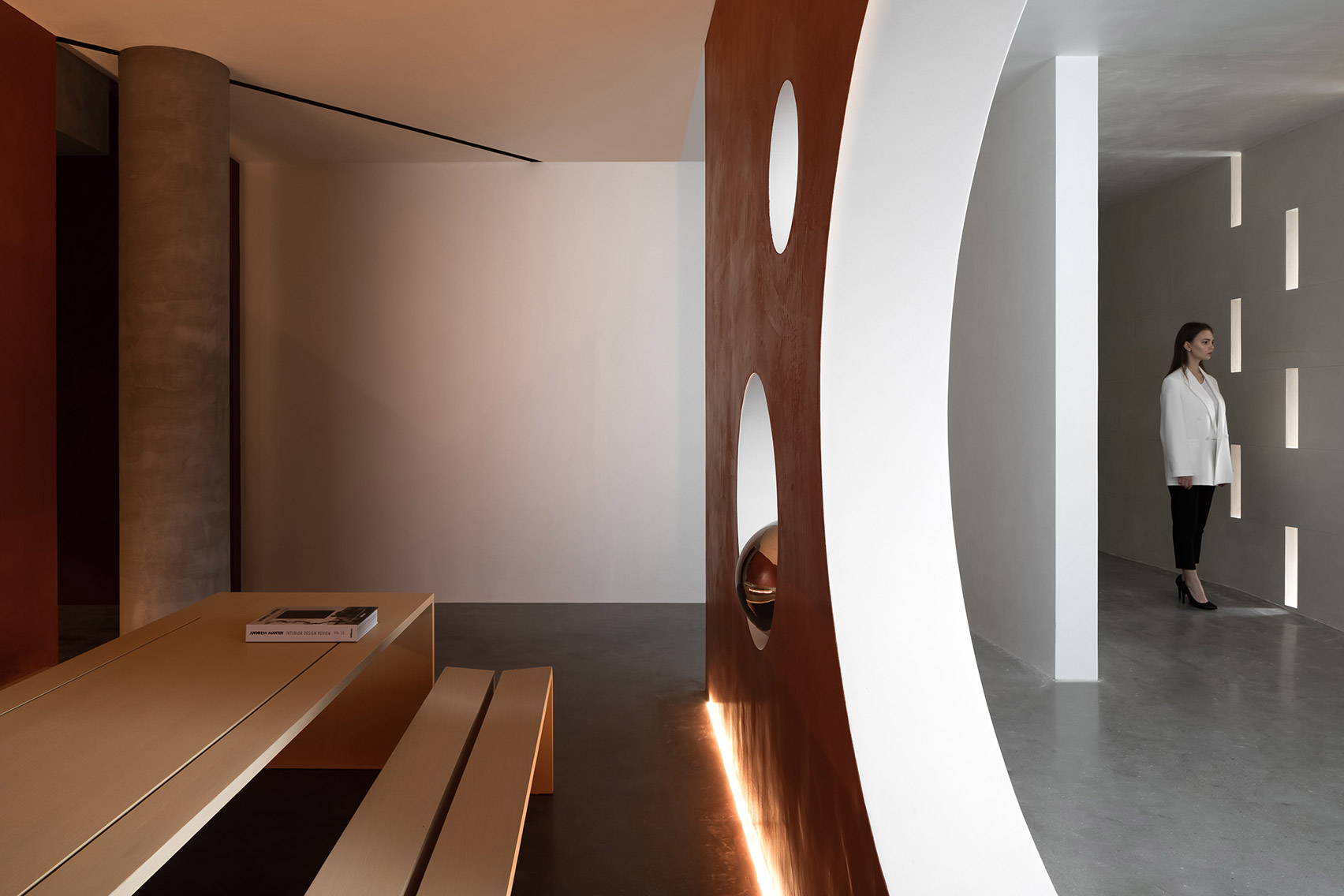 The wall that runs down the centre of the room features different-sized circular cut-outs, which look through to a cosy rest area.

This has been painted a deep shade of orange and dressed with a timber bench. Strip lighting embedded in the floor emits a warm glow. 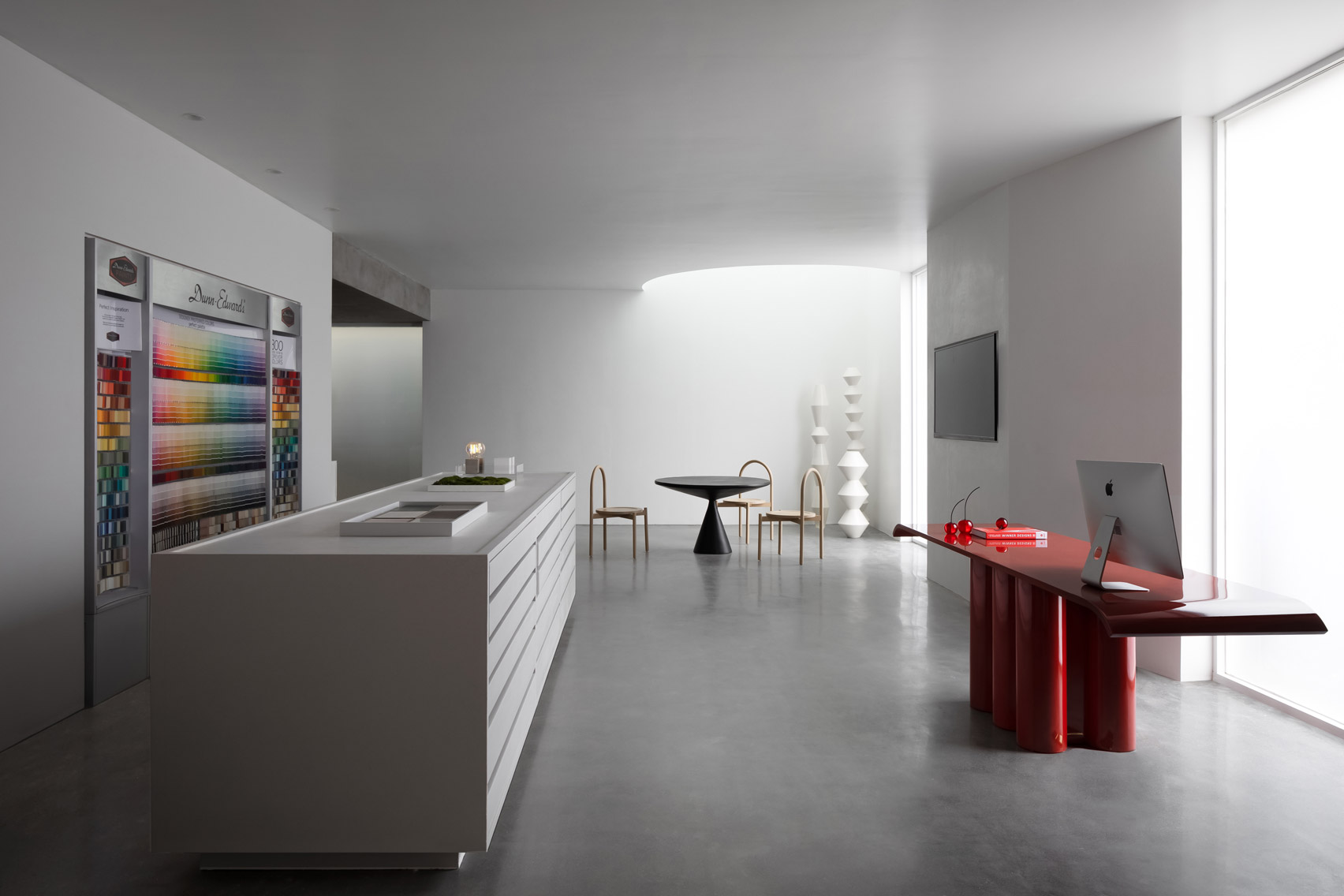 The monochromatic colour palette picks back up in the salesroom, but is offset by a handful of quirky furnishings and ornaments.

This includes a glossy, cherry-red desk, totemic sculptures and a light which has bulbs dangling from drooping metal poles.

Paint samples are displayed behind a chunky white counter. 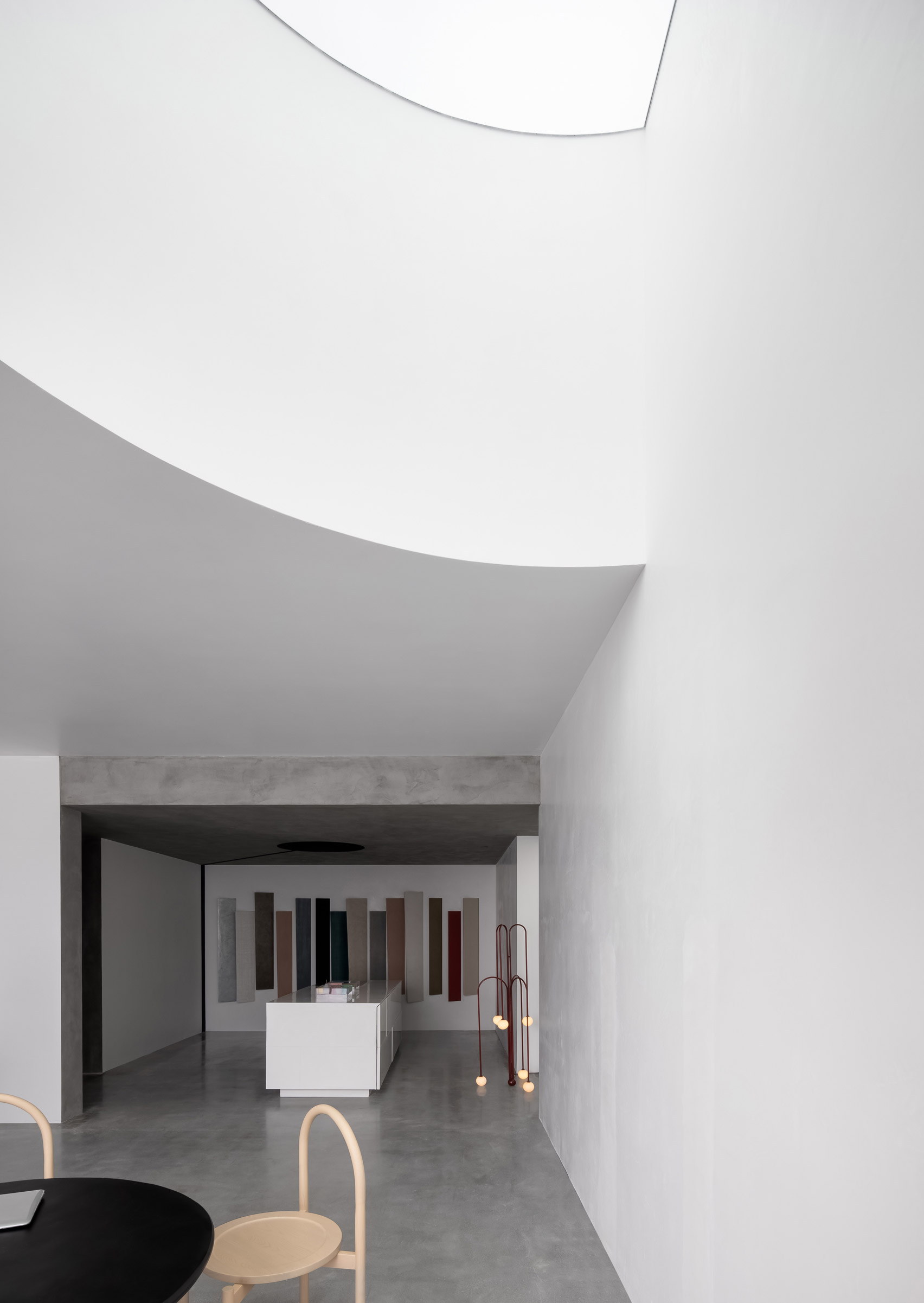 Some rooms are connected by gloomy vaulted corridors, but the showroom overall has been made to have a looping floor plan.

“There is no boundary between the beginning and end of time,” added the studio. “sisitors will be immersed in a moment where time pauses.” JG Phoenix – otherwise known as Jingu Phoenix Space Planning Organization – was established in 2008. In February of this year, the studio completed work on a private museum in the city of Shoutou.

The owner uses it to display his prized collection of aged fish bladders, which are considered a culinary delicacy in China.

Inside, it features glossy wooden floors, clean white walls and an oversized iron sculpture of a fish.

Photography is by Ouyang Yun.