The colourful bedrooms that Note Design Studio has slotted beneath the roof of this Stockholm loft apartment are meant to resemble “life-sized building blocks”.

The Mantelpiece Loft had been purchased by a couple with two children, who were both keen to have separate bedrooms in their new home – but this proved impossible with the existing floor plan.

Challenged with reconfiguring the loft’s layout, Stockholm-based Note Design Studio decided that the dormant space under the loft’s soaring roof could be put to better use. 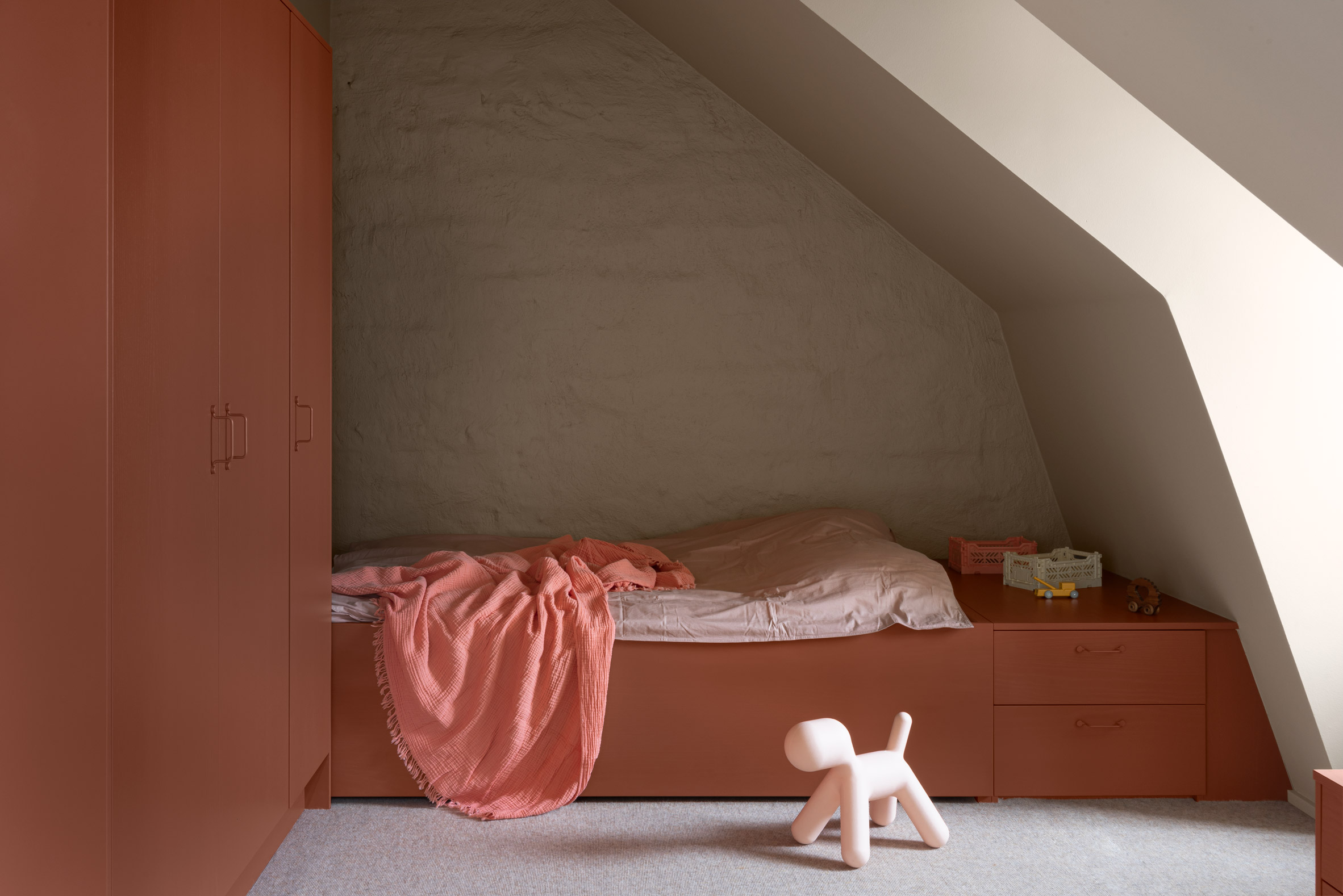 “We were captivated by the opportunities that the unused spaces in the loft’s roof cavity held, these voids that were calling to be bought into the space,” said the studio.

“So we began to consider how we could craft new units and blocks that could slot and squeeze into place—as rooms, or social areas,” it added.

“It’s a project that reminds us that you should always remember to look up.” 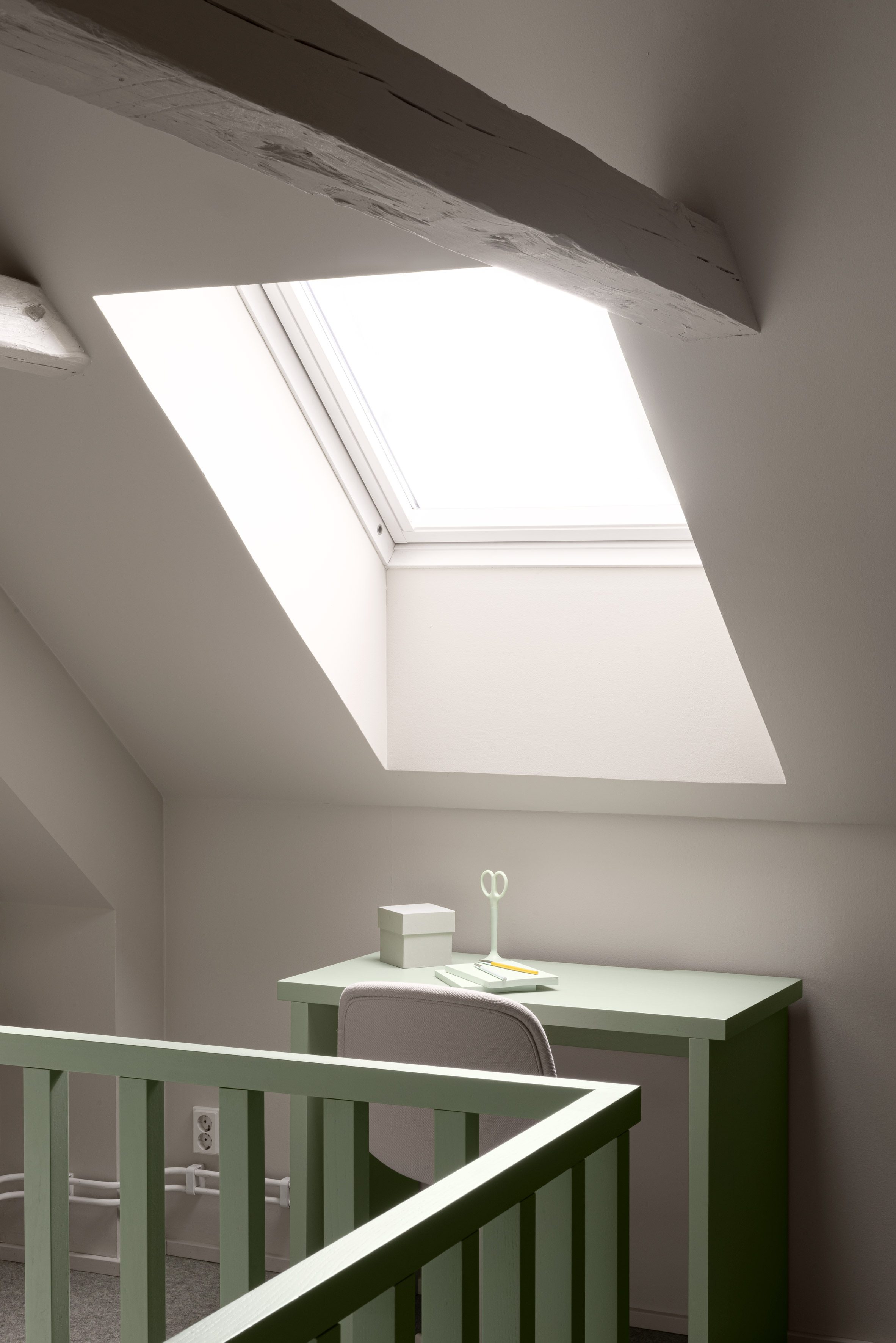 The studio constructed two new bedrooms directly beneath the peak of the loft’s roof. Full-height cupboards painted blush-pink have been incorporated in the daughter’s room, giving her a place to stow away her toys and clothes.

An opening in the wall that was originally carved out to accommodate a skylight has now been fitted with a small desk where she can sit and do homework.

A chunky pink plinth inbuilt with a bed and a couple of drawers has also been slotted under the roof’s sloping wall. 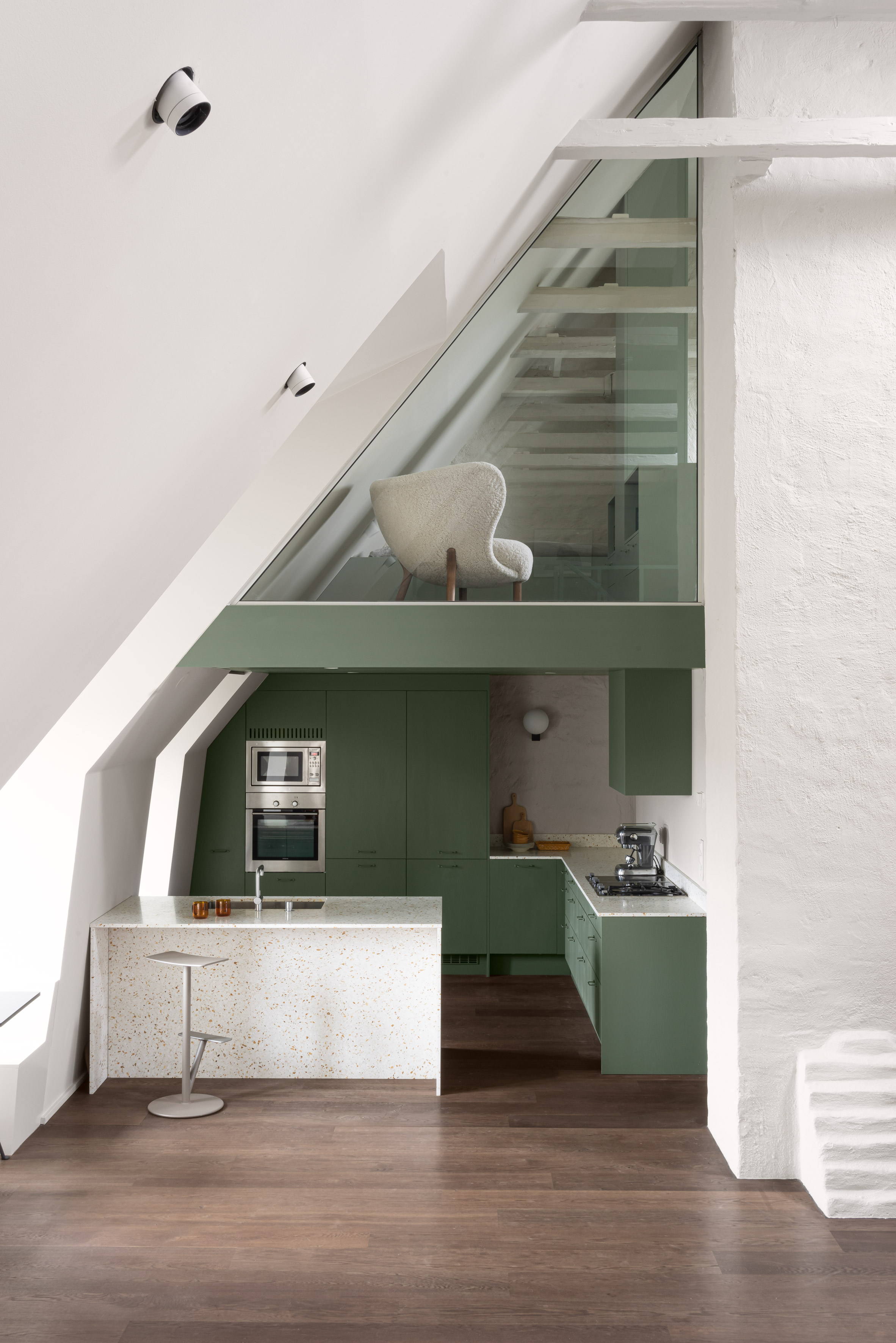 Furnishings have been arranged in a similar manner in the son’s room, but storage here is instead sage green.

The studio specifically chose colours that would stand out against the loft’s otherwise white-painted surfaces. 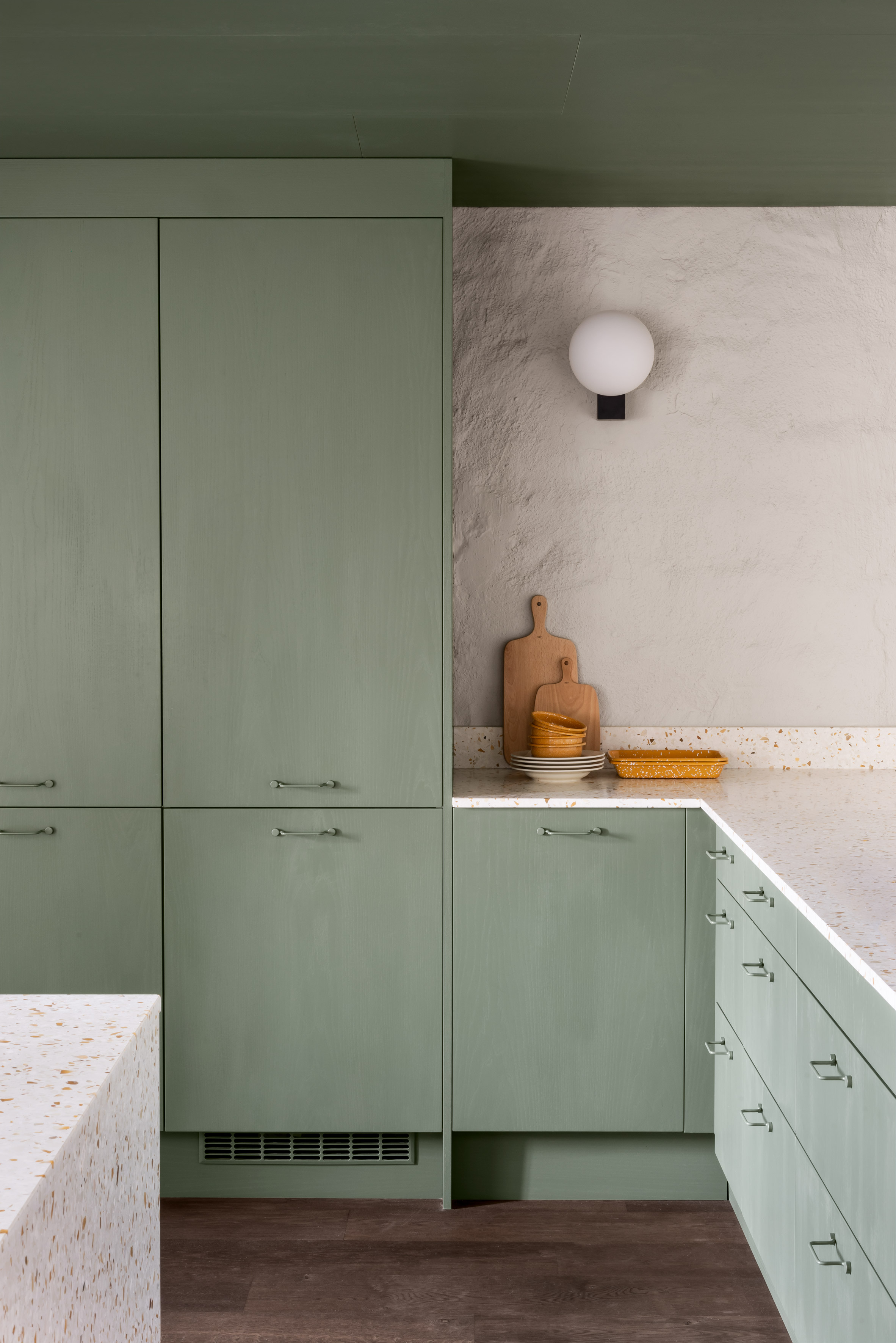 “Rather than try to make the new layer blend in with the loft’s architecture, we wanted to be honest,” explained the studio.

“The new layer is given a very simple, uncomplicated expression and each was intentionally designed as a unit, to appear as if it’s been pushed into place snugly within the original architecture,” it continued.

“Each unit also has its own colour, as though everything is made from life-sized building blocks.” 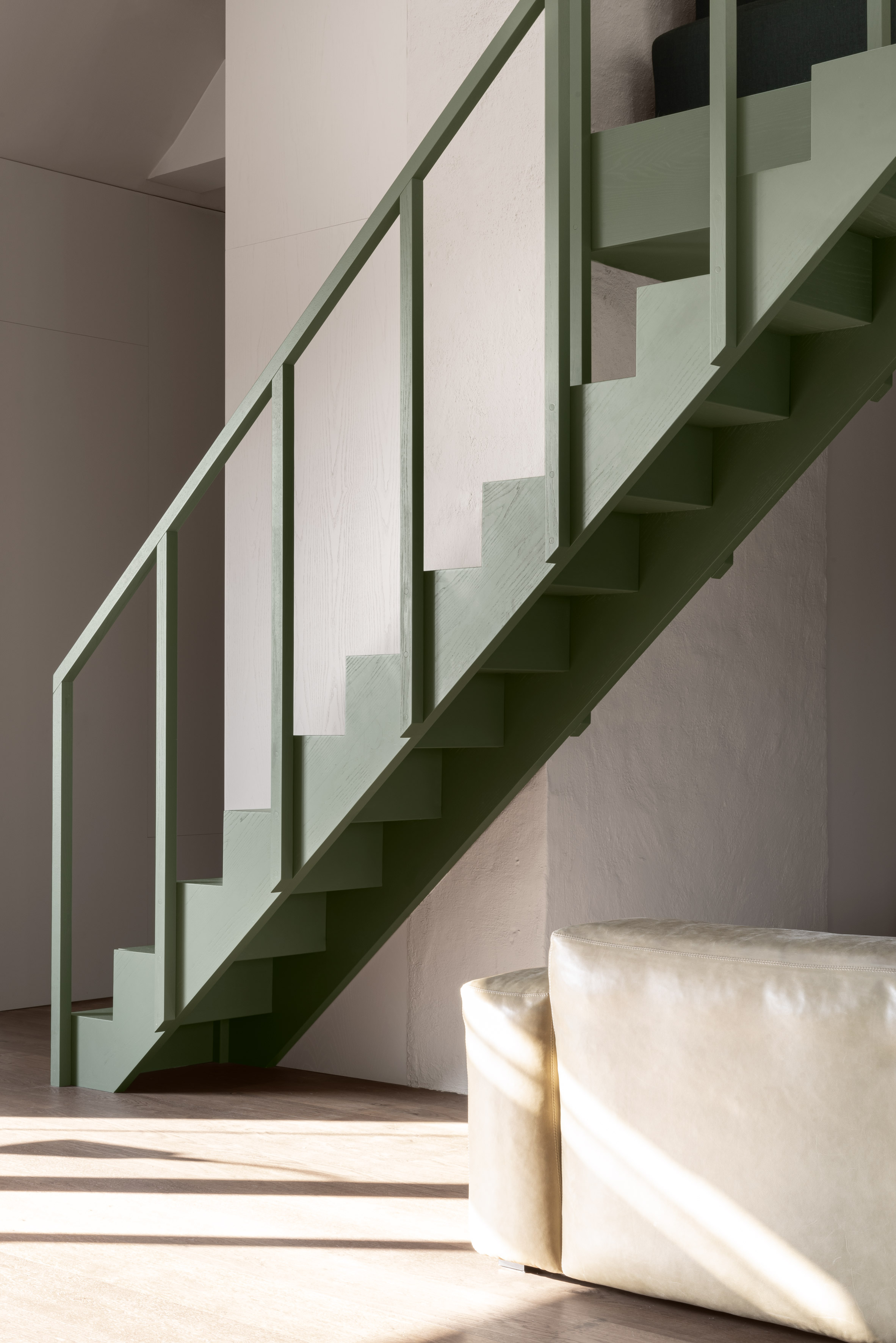 Sage green was also selected for the son’s bedroom so that it appears as a “seamless block” with the kitchen below, where the cabinetry and ceiling have been painted the same shade.

Contrast is offered by the terrazzo-style breakfast island and countertop, which are inlaid with bright orange flecks of stone. 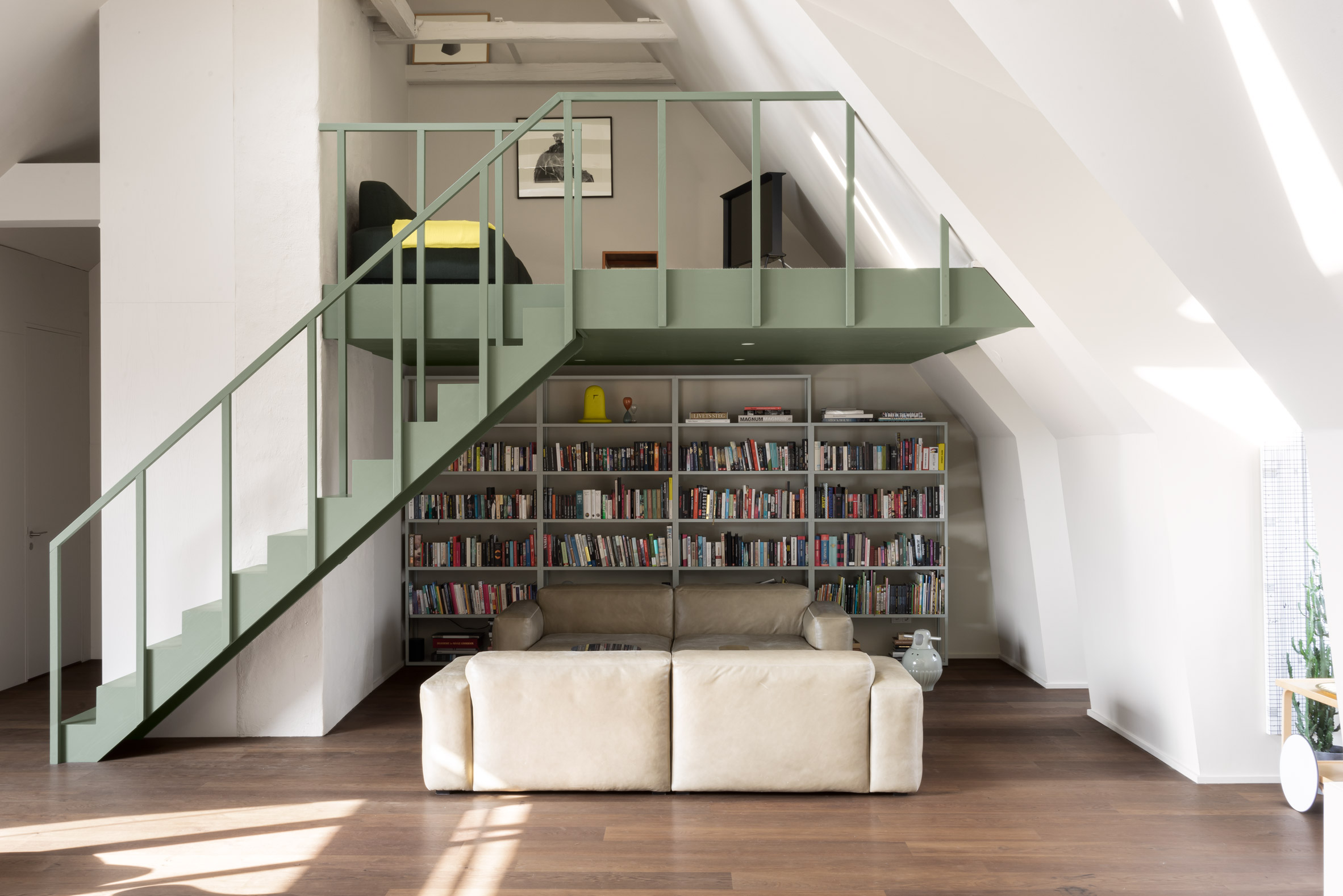 Green paint has additionally been applied to a set of stairs that leads up to the loft’s snug. Below lies a more formal lounge area that boasts two large cream-leather sofas and a tall bookshelf.

Floor-to-ceiling storage has also been installed in the loft’s corridor, the higher cupboards of which can be accessed with a library-style ladder that’s been set on a sliding track. 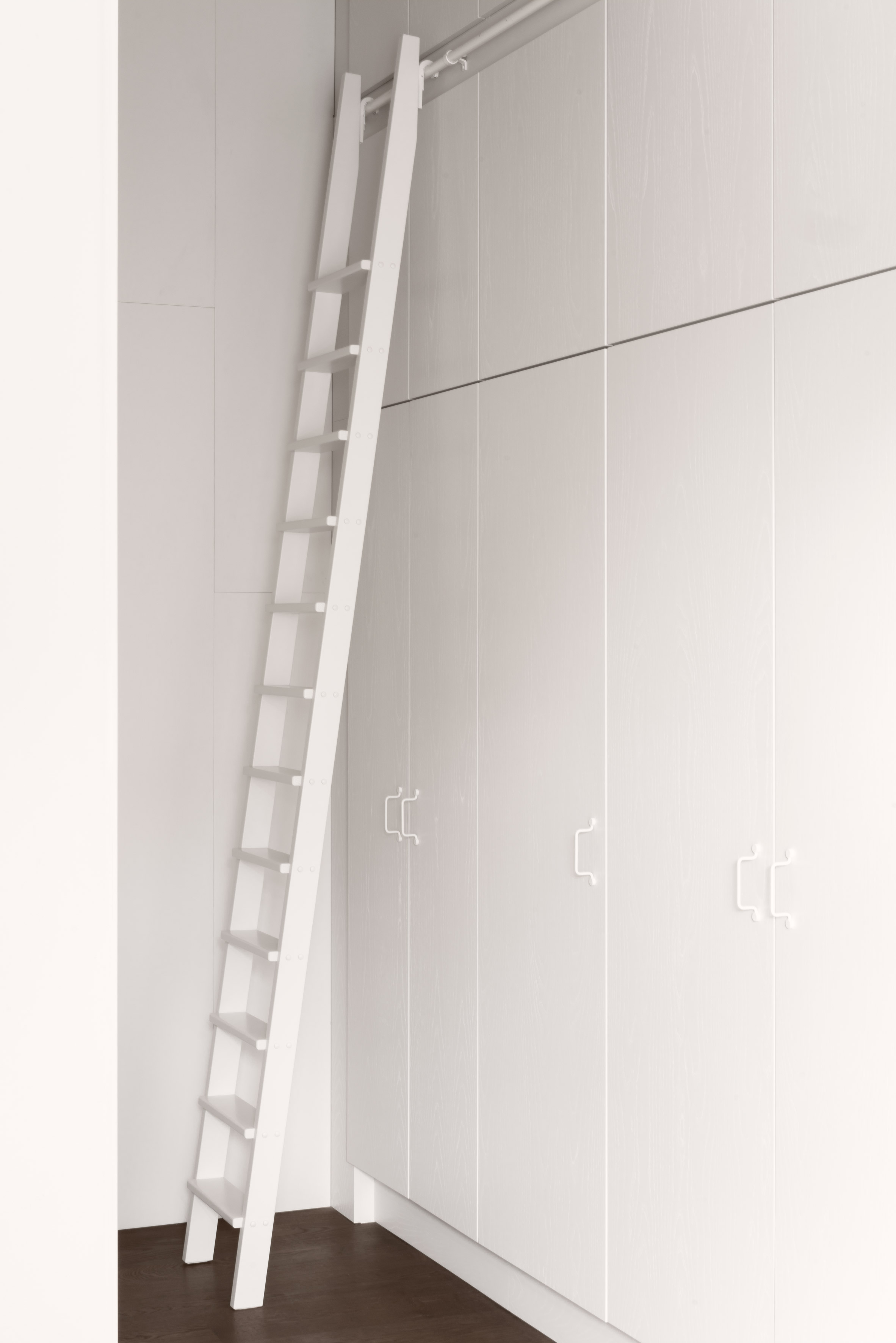 This is the first residential project from Note Design Studio since 2018, when it developed interiors for a block of compact apartments in the Swedish capital.

The studio has more recently created a stand for furniture brand Vestre at the Stockholm Furniture & Light Fair, which was made from reusable materials like plywood, uncemented bricks and stone chips.