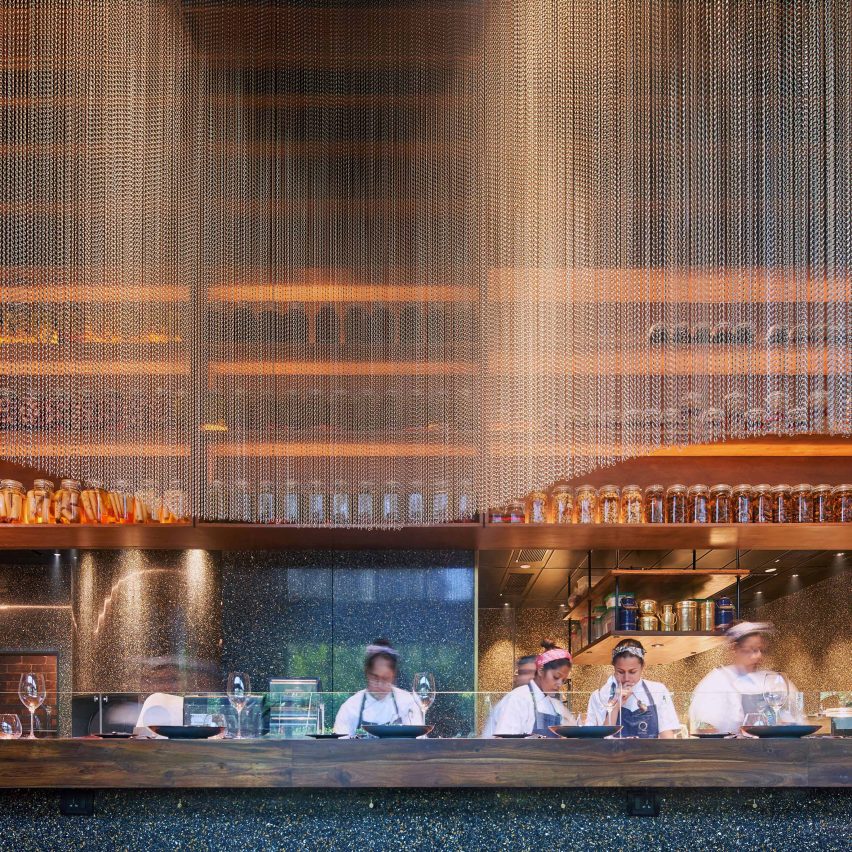 Undulating chainmail curtains lend a stage-like quality to the open kitchen of this Mumbai restaurant designed by Serie Architects.

Qualia is set on the ground floor of Mumbai’s Lodha World One skyscraper and has been designed to let diners “feel part of the entire practice of cooking”.

To achieve this, Serie Architects orientated all of the dining areas throughout the 370-square-metre restaurant towards its grand open kitchen, which runs the entire length of the rear wall. 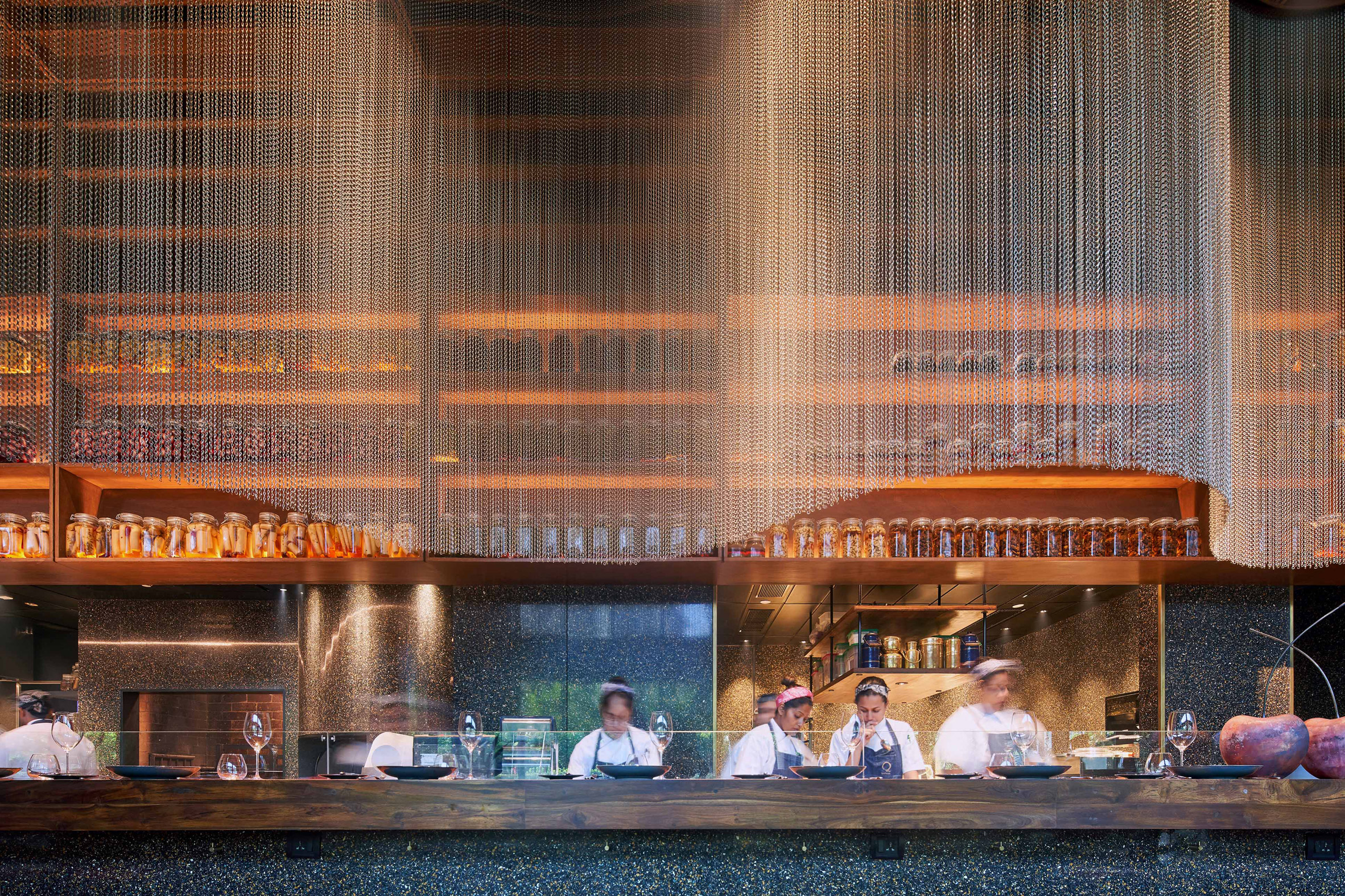 The kitchen is split into three sections: a drinks bar, a central cooking space – which includes its own hearth – and an area dedicated to making the desserts.

Above each of these sections dangles a bronze chainmail screen. The screens gently undulate, much like the heavy velvet curtains seen in a theatre, making the kitchen below appear as a “stage”. 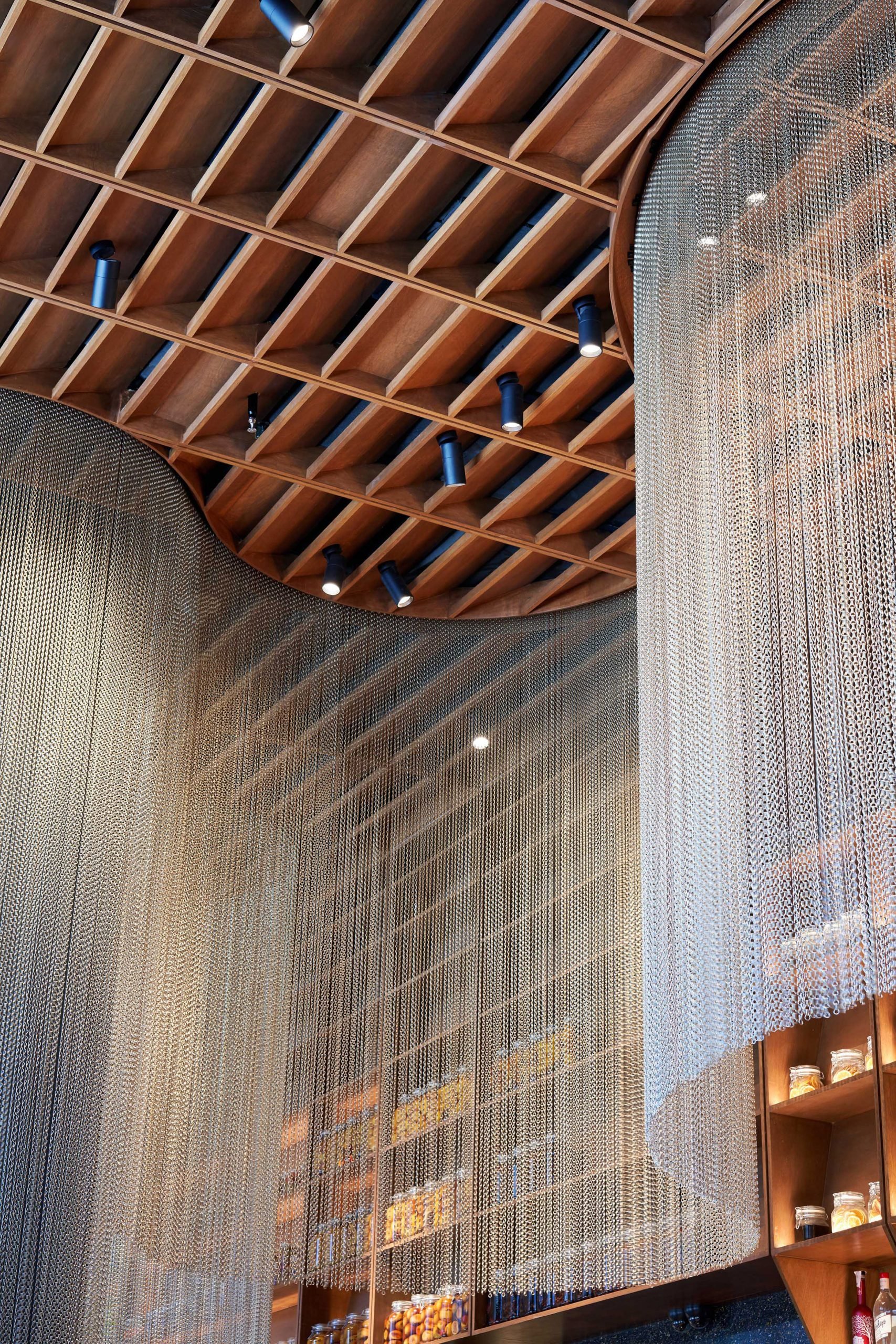 “The bronze chainmail is used to create a division of spaces whilst allowing partial visibility between them,” said practice co-founder Christopher Lee.

“It also creates soft boundaries between different zones and has a theatrical effect that is sensuous and dramatic in equal measure,” he told Dezeen. 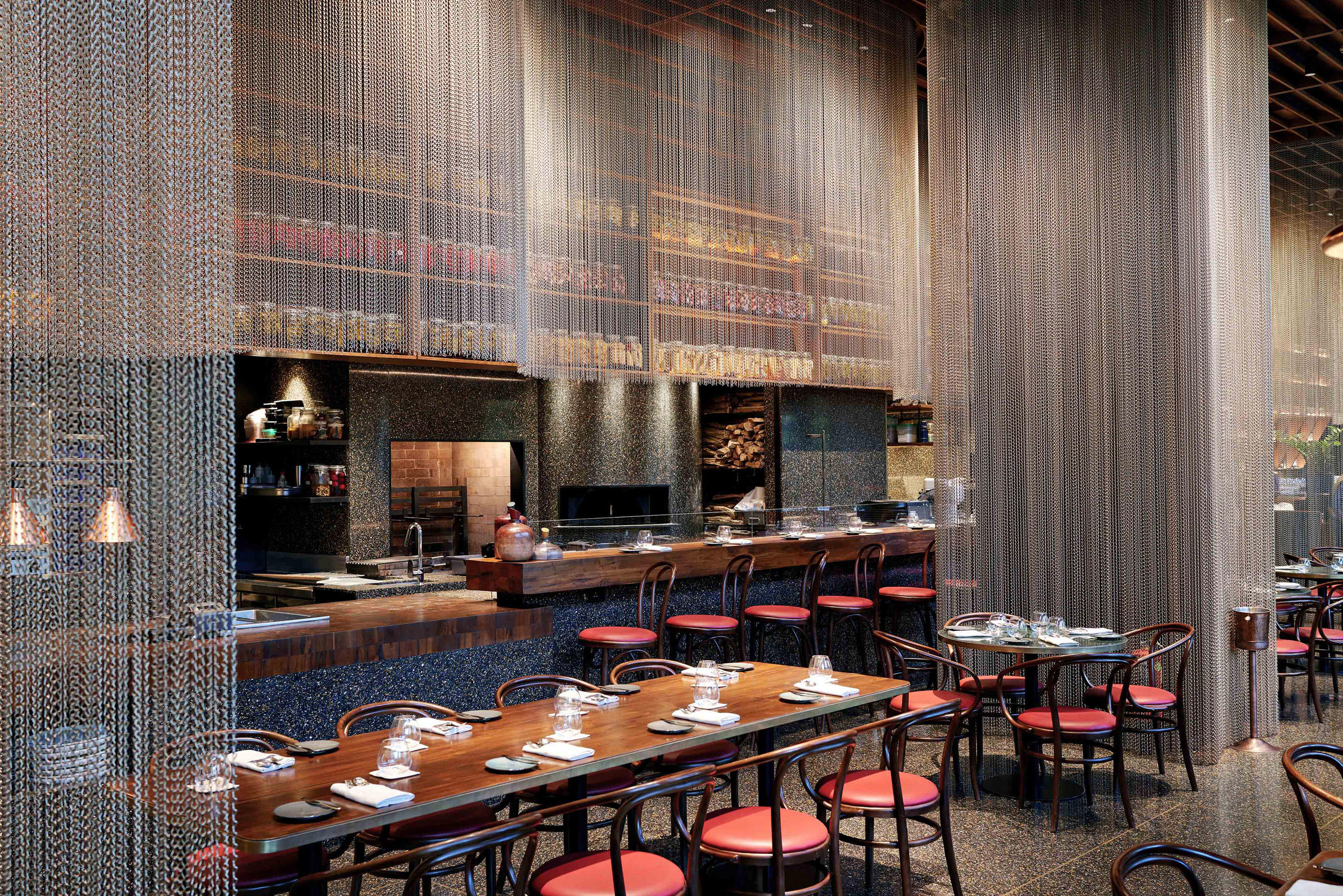 Behind the screens are several rows of shelving, which are meant to act as a proscenium – an arched or square structure erected on a theatre stage to frame the action of the play.

The shelves display glass jars of ingredients that are incorporated into the dishes on Qualia’s menu.

A high counter and row of stools have been placed immediately in front of the kitchen so that diners can get an up-close glimpse of the chefs bustling away preparing orders. 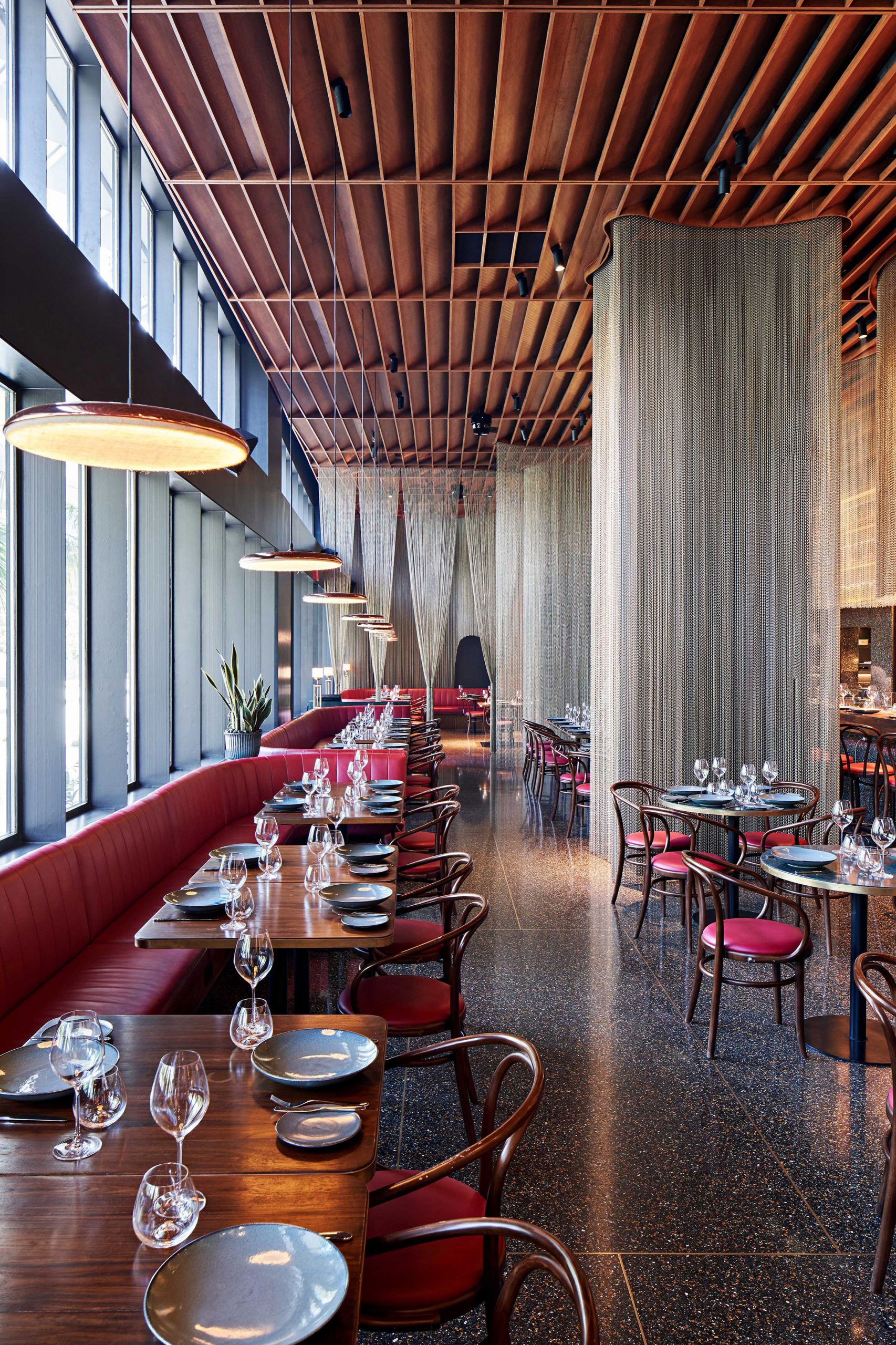 Wooden tables and bistro-style chairs with red-leather seats have then been placed down the centre of the restaurant, arranged around three towering columns – keeping the kitchen in view.

Bronze chainmail has also been hung in front of these columns, stretching over four metres from the floor to the ceiling.

The curtains also extend across the lower end of the restaurant to form a more intimate, closed-off dining space. 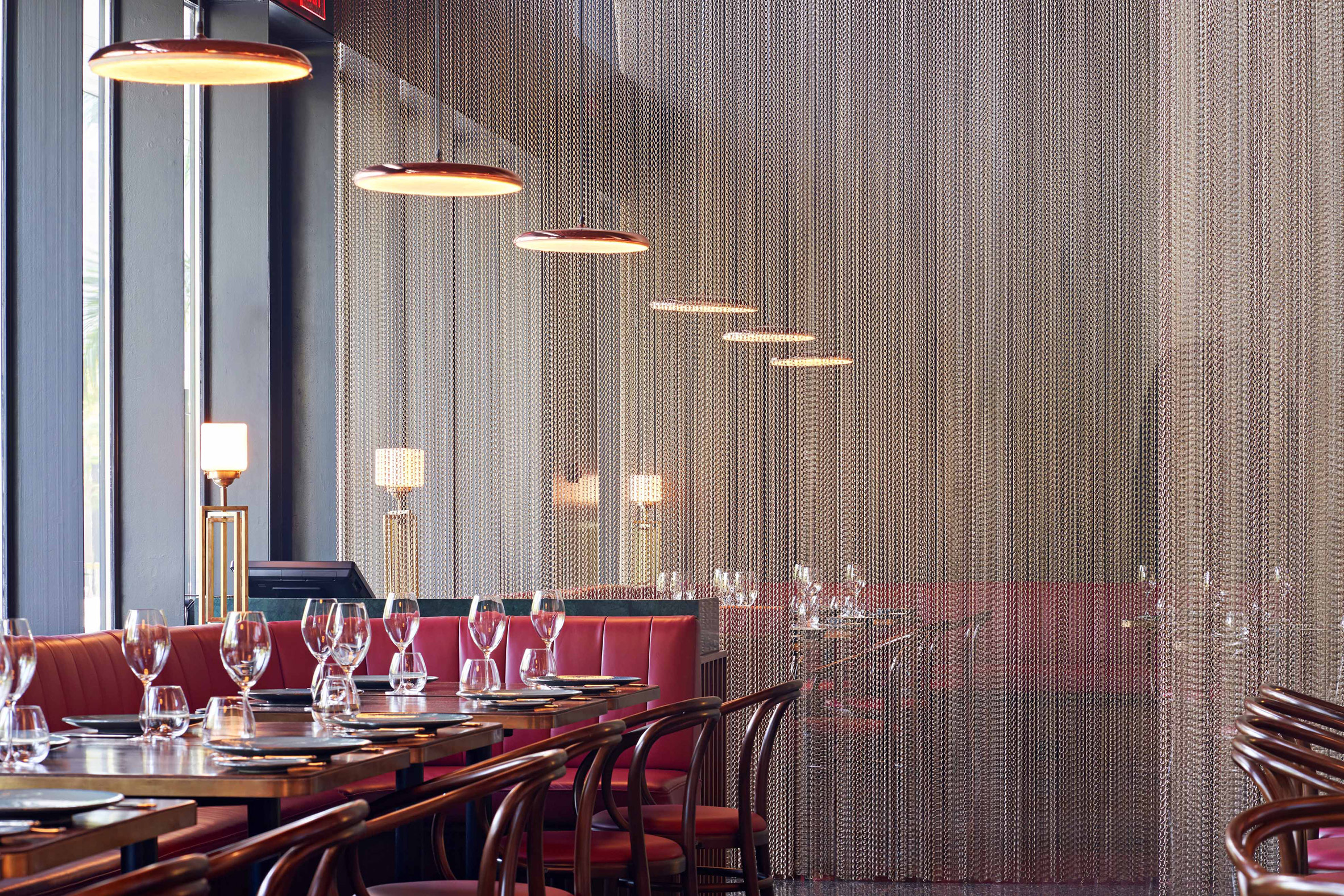 Long cherry-red seating banquettes run down the front side of the restaurant, set against the windows so that diners here also have clear sight lines of the kitchen.

Other than the chainmail curtains, the material palette in the restaurant has been kept limited.

Black terrazzo tiles cover the floor and surfaces in the kitchen, while wooden louvres set across the ceiling provide some sound absorption. 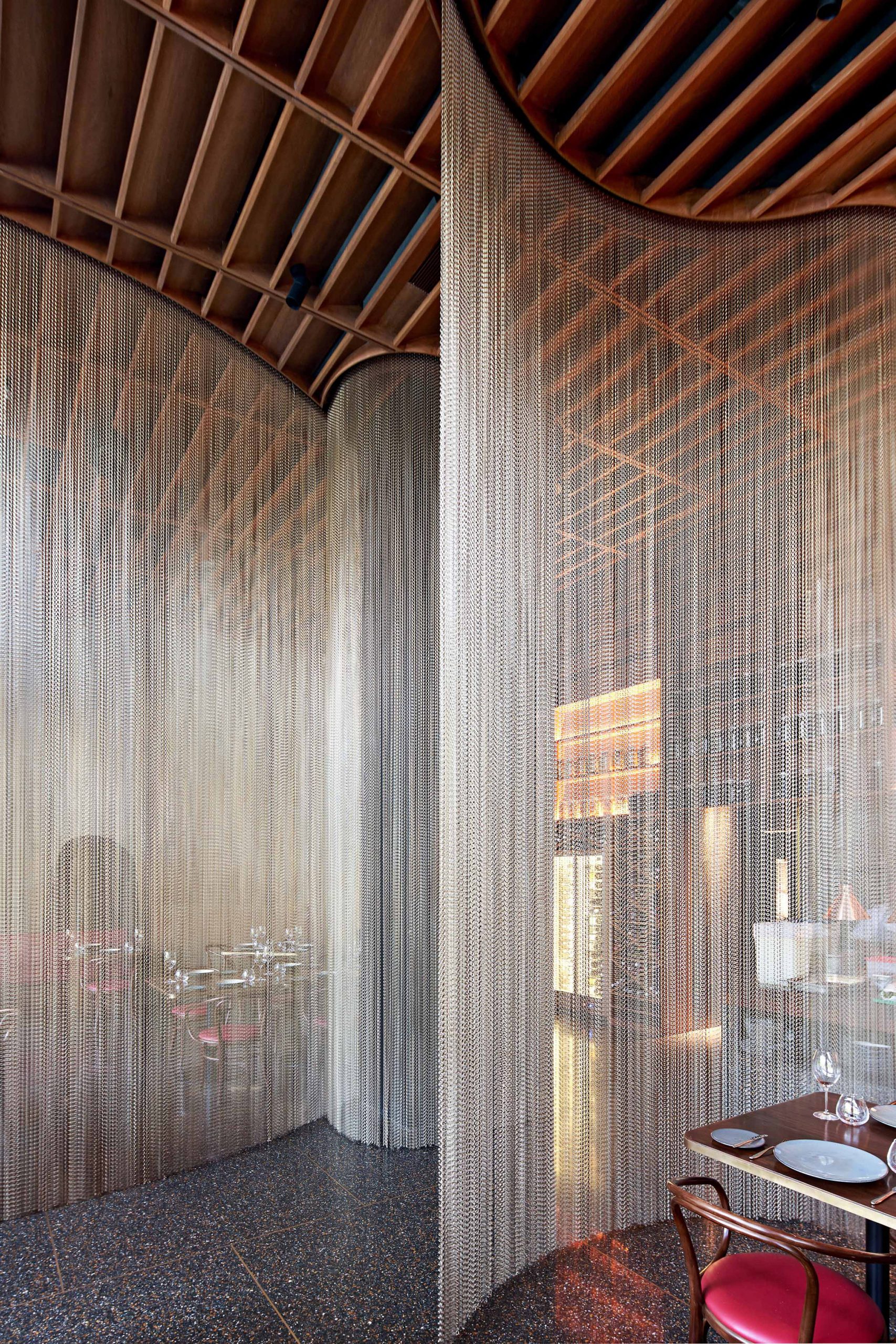 Serie Architects was founded by Christopher Lee and Kapil Gupta, and has offices in Mumbai, Singapore and London.

Qualia is one of the practice’s smaller-scale projects – last year, it created a zero-energy design school with breezy, open-air classrooms, and erected a community centre beside a verdant stepped garden.

Photography is by Jordi Huisman.