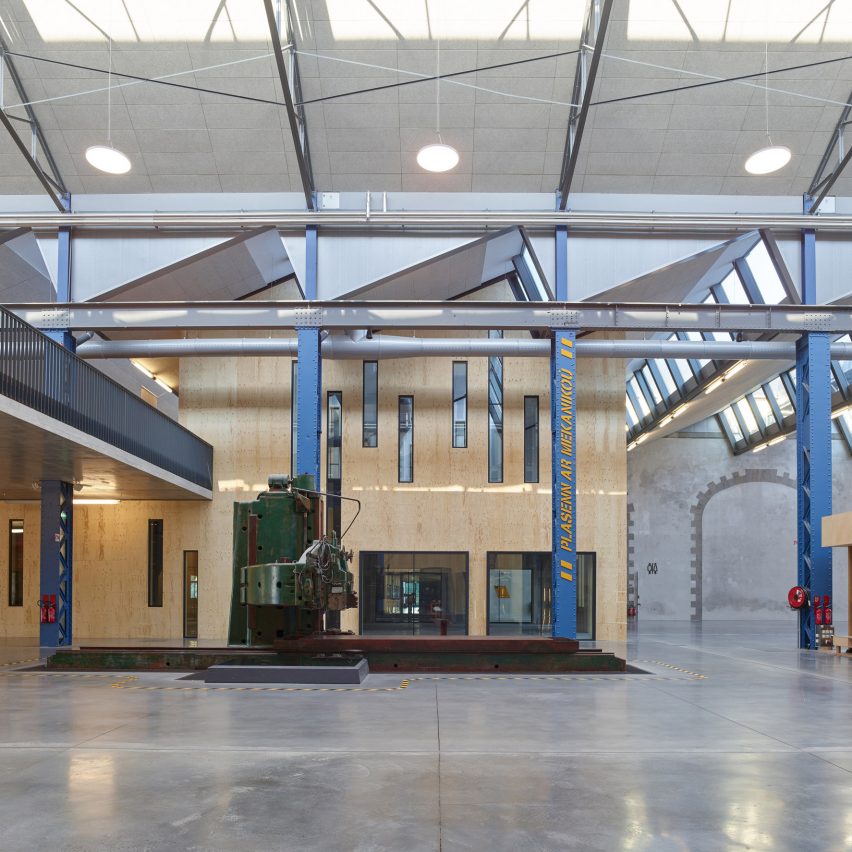 The Ateliers des Capucins has been shortlisted for a Dezeen Awards 2020 in the large workspace interior category.

The studio’s brief was to design a number of shells in order to create an interior street with two floors inside the historical arsenal building, covering 5,000 square metres.

Atelier L2 used laminated veneer lumber (LVL) for the shells, which were designed to stand out against the metal structure and pitched glass roof of the 10,000 square-metres Ateliers des Capucins.

Each wooden shell measures between 150 and 400 square metres, with some of the concept stores in the space using more than one.

“In this way, the client would be able to find buyers who could convert each ‘box’ to complete the cultural and service offer,” Atelier L2 co-founder Pierre Lelièvre told Dezeen.

The boxes are a permanent fixture of the Ateliers des Capucins – which functions as a large, covered market space – and can’t be moved.

“Even though their appearance suggests it, the ‘boxes’ are absolutely fixed and cannot be moved under any circumstances,” Lelièvre said.

“Their technical and structural complexity does not allow such flexibility. They are indeed equipped with all the necessary networks to host any kind of activity: exhibitions, restaurants, offices, breweries, co-working.”

The studio chose to use LVL made of spruce veneers for the structure of the facades and the floors, which span 10 to 14 metres, as it allowed them to create the units with as little impact on the existing building as possible.

“The entire design of the project was thought out with respect for natural resources,” Lelièvre explained.

“The facing of the facades is made of spruce, the internal bracing uses gypsum boards and the insulation is made of wood wool. The floor boxes are ballasted with aggregates.”

Windows were inserted into the facades of the wooden shells, to make them resemble many smaller houses inside the bigger building.

The ceiling height of the huge hall space means some of the boxes have facades that reach as high as 13 metres, and gabled roofs that have been slotted into the ceiling.

“The use of wood was a way for us to stand out against the existing building, which is entirely made of stone and metal, while also giving an ephemeral side to our layout,” Lelièvre said.

“We wanted to give the feeling that our project was simply set down in this historical and remarkable setting.”

Atelier L2 is based in Rennes and was founded by Julie de Legge and Pierre Lelièvre.

Also on the shortlist for the large workspace interior category are the monochrome interiors for KCC Office in a former factory, and The Audo hotel in Copenhagen that doubles as a showroom.