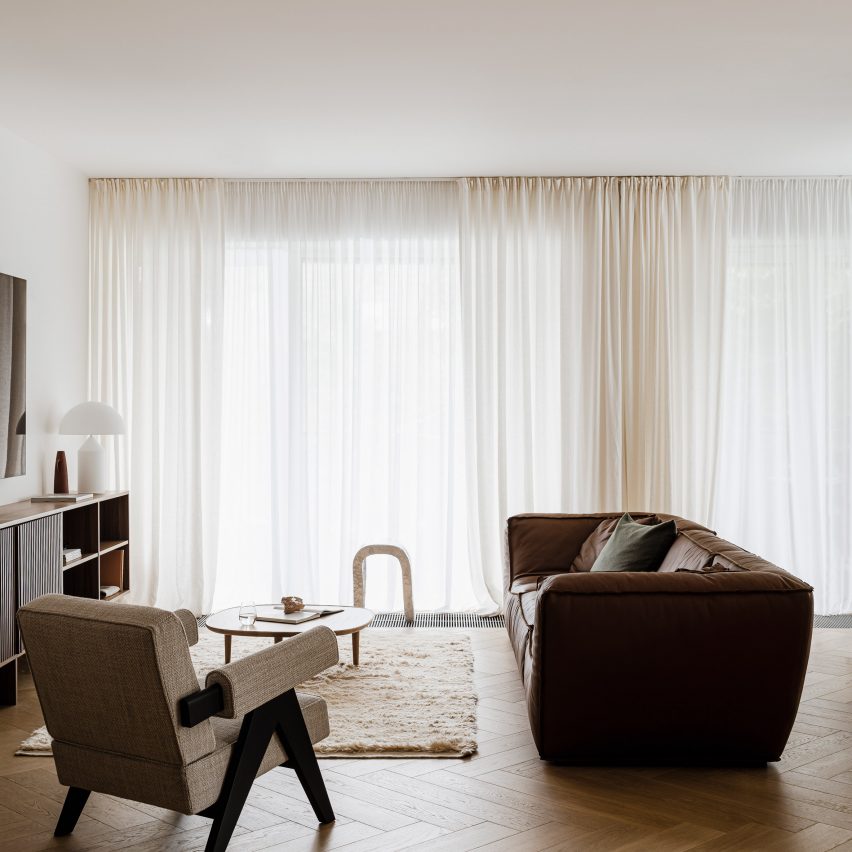 The high-pressure medical jobs of the couple living in this Poznań apartment led Agnieszka Owsiany Studio to apply a calming mix of wood and pale marble throughout the interiors.

Set inside a newly built residential block that overlooks a botanical garden, the Botaniczna Apartment is home to a surgeon and his wife who runs a medical clinic.

The couple had purchased the 90-square-metre apartment as an empty shell but soon brought Agnieszka Owsiany Studio on board to develop the interiors.

They requested that the studio compose a calming home environment where they could unwind at the end of their often stressful workdays.

“My clients asked for a high quality, almost hotel-like space as they were in need of everyday comfort,” the studio’s founder, Agnieszka Owsiany, told Dezeen.

“I really wanted to create something timeless, hence the idea to use the materials such as wood and travertine which age beautifully and hopefully won’t be replaced within many years,” she continued.

“All the kinds of wood and stone I chose, they have these nice, soothing warm tones.”

Wooden chevron flooring runs throughout the home’s open-plan living and dining room, at the centre of which sits a plump sofa upholstered in brown leather.

A coffee table perches on a fluffy rug just in front. It runs alongside a four-metre-long walnut sideboard where the couple can tuck books and magazines, or display small ornaments.

The kitchen is placed in the corner of the room, finished with oak cabinetry. Slim slabs of creamy travertine marble have been used to make the splashback behind the stove and the breakfast island.

There’s additionally a console made from burl wood – specifically chosen by the studio for its distinctive grain pattern – and a jet-black dining table fashion from bogwood, which is meant to stand in stark contrast to the otherwise neutral shades in the room.

A cosy, wood-panelled hallway leads to the apartment’s other rooms, which lie behind floor-to-ceiling doors.

Agnieszka Owsiany Studio has continued using much the same material palette – for example, burl wood has been used to create a vanity desk in the master bedroom. Oak storage units feature in the adjacent walk-in-wardrobe, which is neatly obscured by a linen-curtain screen.

The same travertine marble that features in the kitchen has been used to line surfaces in the bathroom and to make the washbasins.

In the home office, oak lines the back wall and a full-height gridded shelf.

This isn’t the first project that Agnieszka Owsiany Studio has completed in the Polish city of Poznań.

At the end of last year, the studio designed the interiors of restaurant Nadzieja, filling it with Bauhaus-inspired details like tubular steel-frame chairs and pale partition walls that echo the buildings seen in Tel Aviv’s White City.