Baruchfoundation Leave a Comment on The Recipe Blog: Crockpot Turkey

This is a simple recipe but very good! It’s almost so simple that you feel guilty. Try it once and you won’t… it will be a regular staple in your repertoire!

You will need:
A large oval crockpot -a small round crockpot won’t work unless you use a very small turkey
1 turkey (less than 10 lbs works best), thawed -any bigger and it won’t fit in your crockpot 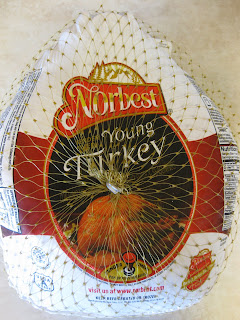 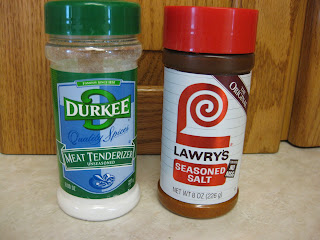 Directions:
Thaw turkey about a week before you need it just to be sure that it is completely thawed. Remove plastic covering and pull out the bag of jibblets from the center. Remove anything else that is attached that shouldn’t be in a crockpot.

In cold water, rinse turkey on the outside and the inside very well. Make sure the water is drained out of the turkey. Then place in crockpot. For the next step, I prefer to use plastic gloves. Using equal parts of meat tenderizer and Lawry’s seasoned salt, rub generously inside and on the outside of the turkey. Using one hand, I pour the meat tenderizer into the other hand, followed by an equal portion of the seasoned salt. Then I mix them together, while holding my hands over the crockpot. It’s kind of tricky, but make sure you get all parts of the turkey. Go back and forth between putting equal parts of the rub in your hands and actually rubbing it on the turkey until it’s all covered, inside and out. After I’m done putting on the rub, I pour a very tiny bit of water, less than a half of a cup, in the bottom of the crockpot just to get the juices started. 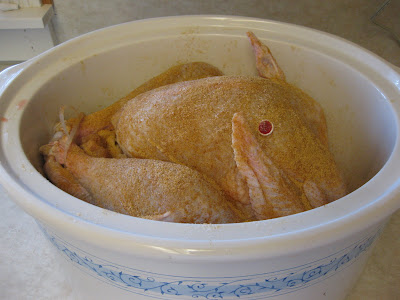 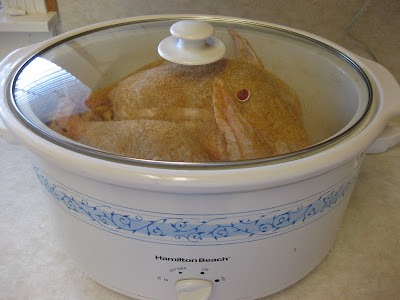 Your turkey may not completely fit into the crockpot if it is over 10 lbs. The turkey in the picture below (taken for demonstration only) is 9.72 lbs -a little bigger than I usually like to use. Therefore, it doesn’t quite fit once the lid is put on. You won’t really know if it will fit until it thaws, though. However, when you’re ready to cook it, and it is still just a little big, if you put the lid on and use the long rubber band thing that comes with most crockpots of this size, the turkey will eventually fit just fine after a bit of cooking. I promise. I’ve done it many times. 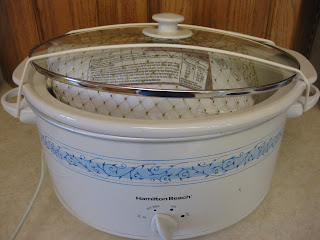 Turn your crockpot on high and cook for about 3 or 4 hours. This will depend on the size of your turkey and how fast your crockpot cooks (they are not all the same, unfortunately). To check the doneness, I just put in my meat thermometer in the breast portion of the turkey to make sure that it registers a temp of 170 degrees. If you want to cook it on low, it will take closer to 5 or 6 hours.

Once it is done, DON’T remove lid, just turn off crockpot, and let sit for about 5-10 minutes before carving. This turkey is so tender that it just falls right off the bone! Remove turkey from crockpot and carve on large platter or baking sheet. Serve with desired side dishes. This turkey is very juicy and never dry. Try it once and you’ll never be able to eat any other turkey again. 🙂 It is so good for turkey sandwiches later, too, because it’s still so juicy and tender. Say goodbye to dry turkey!!! 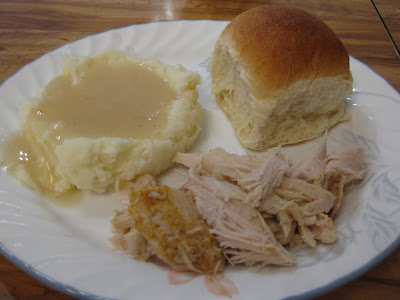 Note: The drippings from this turkey don’t work perfect for gravy just because of all the salt. However, I have made gravy using a small amount of the drippings, water, and some flour/cornstarch. Just be sure to taste it in case you need to add more water if it is too salty. Let boil and thicken and enjoy!