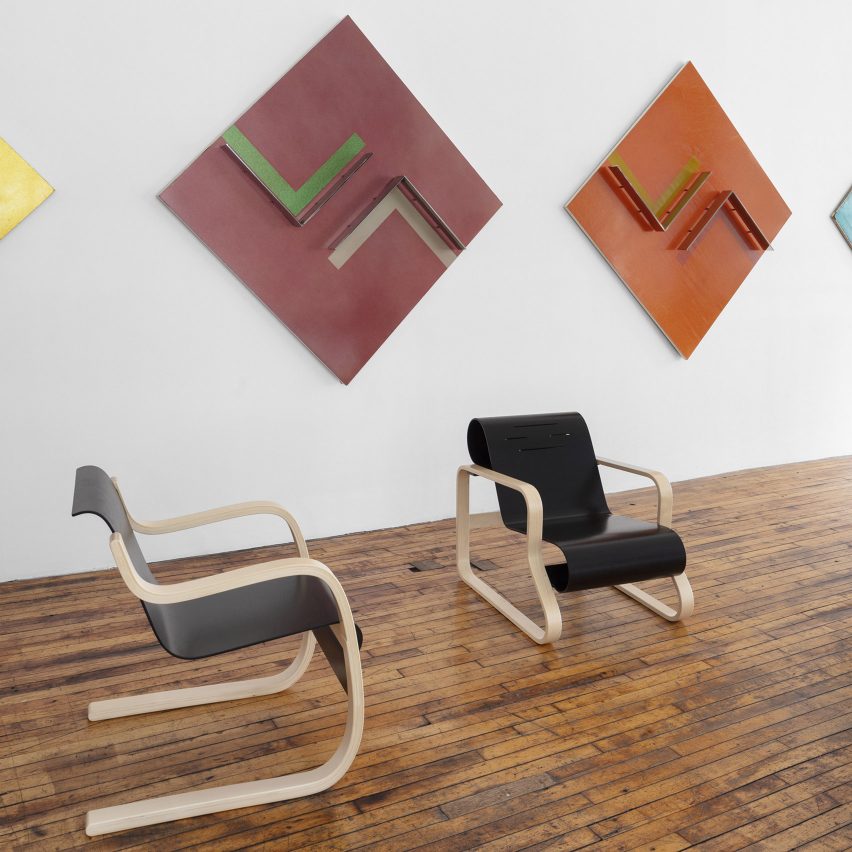 This exhibition at the Judd Foundation in New York pairs together furniture by architect Alvar Aalto and paintings by sculptor John Chamberlain from late American artist Donald Judd’s archive.

The items were sourced from Judd’s permanent collection, housed in the Judd Foundation’s outpost in Marfa, Texas, which displays collected works next to many of his own pieces to create a “natural situation for viewing art”.

“By placing Aalto furniture and Chamberlain paintings together, Judd created what was for him, a natural situation for viewing art in which one could, ‘sit there and have a drink, or eat, or lie down, or read’ and then ‘look at the work,'” the Judd Foundation said. 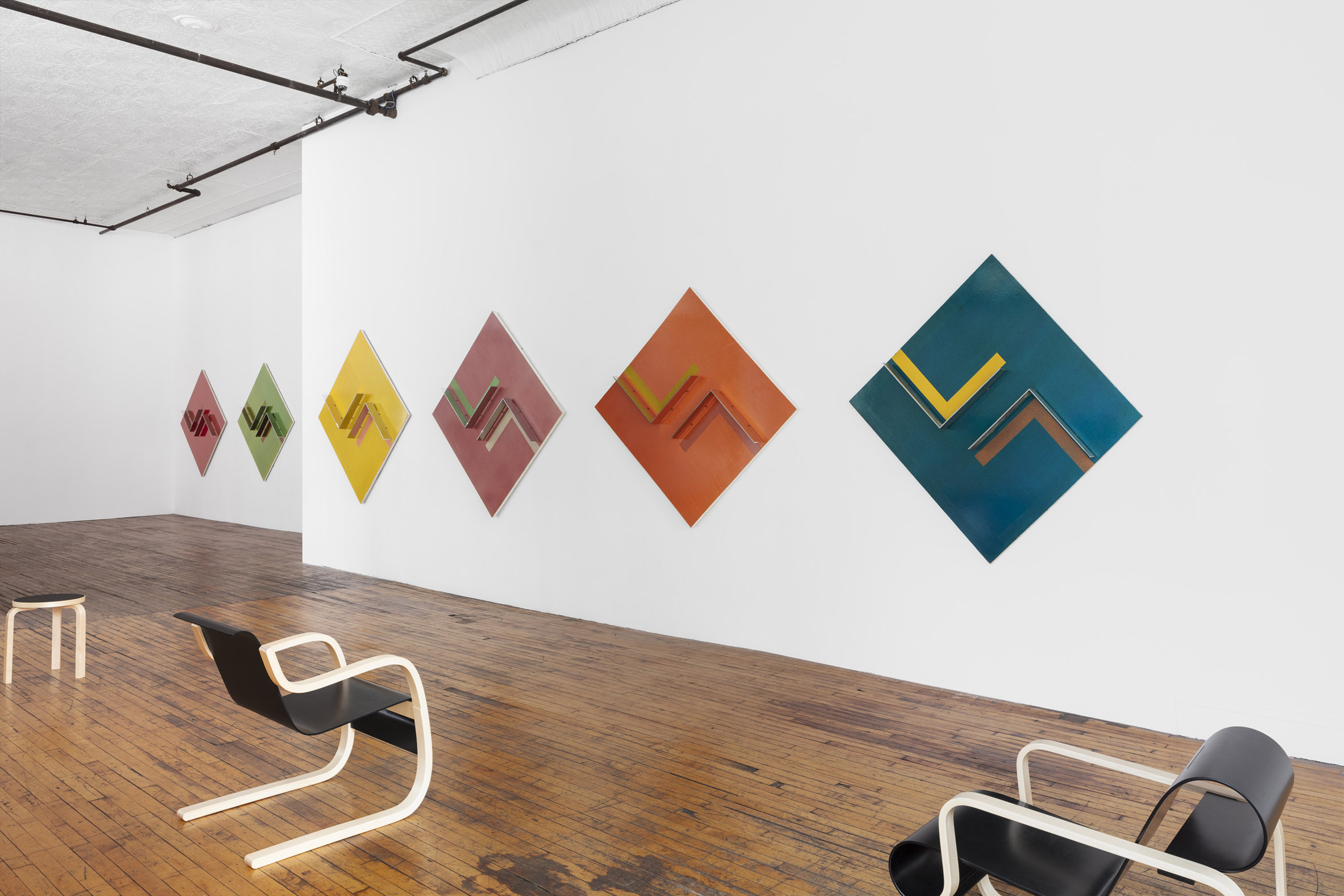 Donald Judd’s son Flavin Judd told Dezeen that exhibition at the New York outpost, which was formerly the artist’s home and studio, is intended to mimic Judd’s intention for the Marfa space.

“The combination of Don putting those two things together in the space in Marfa is its own thing that in itself is worth preserving,” he said. “Because it’s not enough to see pictures or to think about it, you have to actually be physically be in front of the things to feel them to understand them.”

“It’s about experiencing things in space and bringing them up to New York was a way to do that,” Judd added.

The exhibit includes six of Chamberlain’s paintings Judd purchased from a collection of eight, in 1965, that have been restored by the Judd Foundation.

The seventh is on loan from New York’s Dia Art Foundation for the exhibit, and the eighth is in Hirshhorn Museum’s collection. The New York show marks the first time the seven works have been on display together since Judd’s purchase. 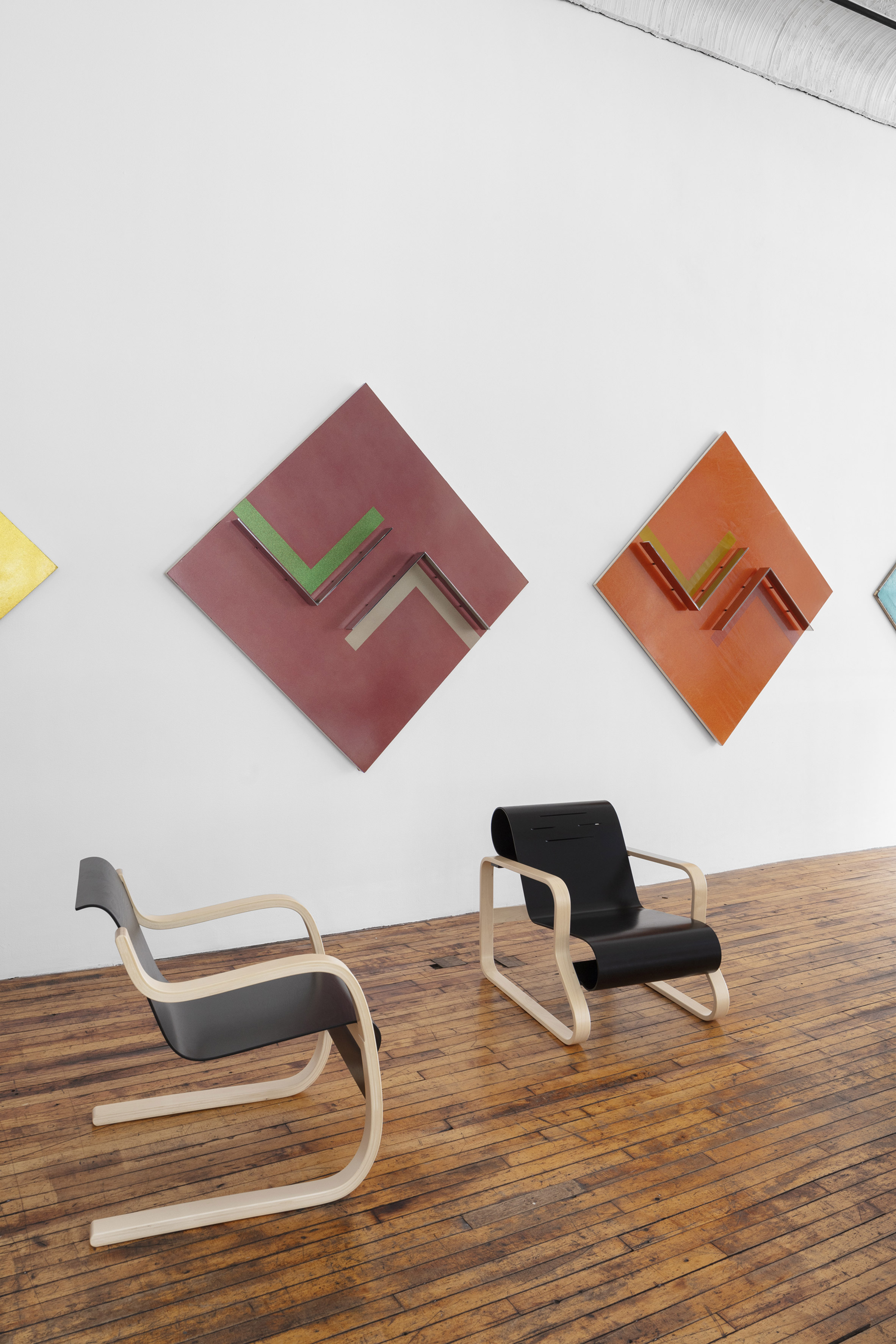 Measuring four-by- four-feet (1.2-by 1.2-metres), the works are composed of fibreboard coated with several layers of auto lacquer with reflective flake – Chamberlain often combined scrap car parts with other discarded industrial materials in his works.

Each piece is painted in a different colour and punctuated by two right angled-metal bars that protrude from the front.

Chamberlain designed the pieces to be arranged and presented in a multitude of combinations. For this exhibition, they are displayed on 45 degree angles and pop against the Judd Foundation’s bright white walls.

The paintings are accompanied by furniture modernist architect Aalto created in the 1930s. Among these are the Tank armchair upholstered with zebra print fabric, and several stools and tables that feature the designer’s iconic L-leg design, formed from bent wood. 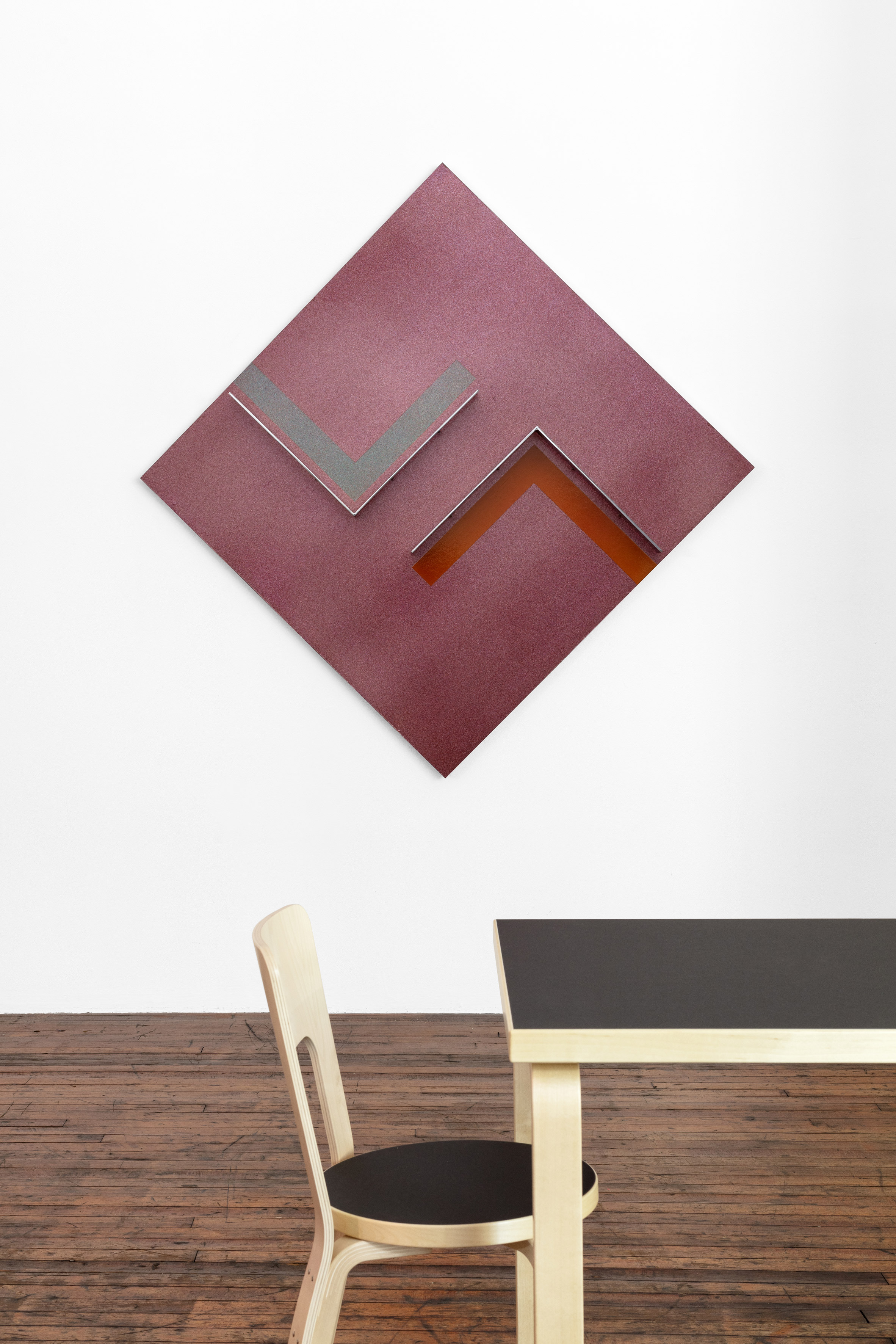 The Finnish architect, who founded design company Artek, invented a method for bending laminated wood into any angle to fabricate arms for chairs and legs for his table and stool designs.

“Don was just very appreciative of the ingenuity of Aalto,” Flavin Judd said. “He just really liked when people were doing new things, which these were very new for 1932, 1935, 36.”

Following the showcase the works will return to Texas and be reinstalled permanently in Architecture Office, which is currently under renovation.

Judd passed away in 1994, and is a celebrated artist best known for his radical approach to art, sculpture and furniture design.

In 2020, the MoMA will present a retrospective of Donald Judd in an exhibition of his paintings and objects, while in 2018 the San Francisco Museum of Modern of Art exhibited many furniture pieces from Judd’s New York and Marfa studios.

The preservation work of the Judd Foundation, founded in 1996, furthers Judd’s legacy by restoring and displaying the artists’s collected and personal works. 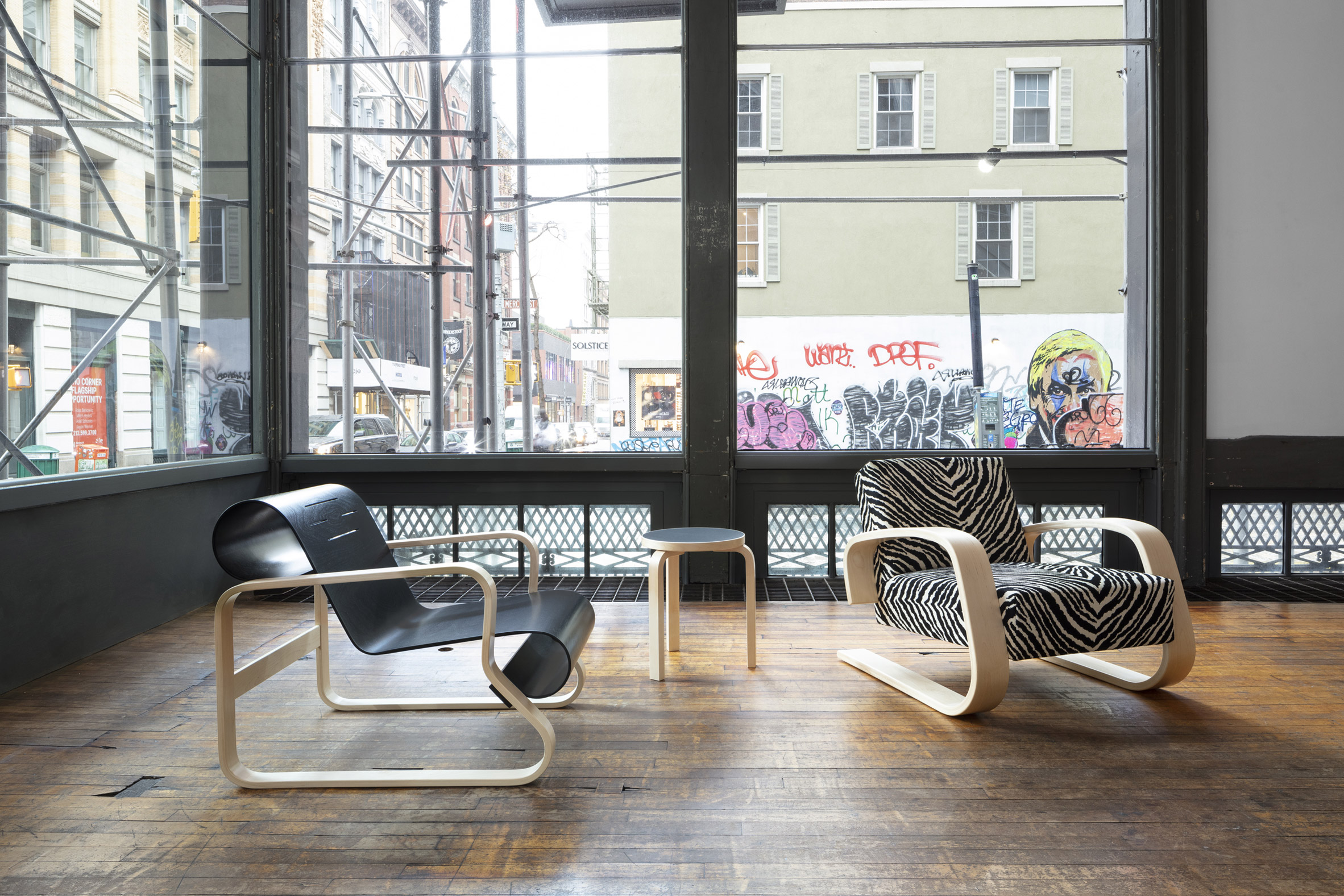 “Works that contradict the culture they came from are worth preserving, so that’s true for Don, it’s true for any artist who basically changes the culture within which they lived,” Judd’s son said. “By preserving things we’re moving culture maybe in a certain direction or influencing it a little bit.”

The foundation oversaw the restoration of Judd’s New York residence and office in 2013, which involved refinishing the timber floorboards and exposed plaster walls. and replacing an existing staircase to update the interior to current healthy and safety standards.

Photography is by Timothy Doyon.

The post Donald Judd’s collection of works by Alvar Aalto and John Chamberlain go on show in New York appeared first on Dezeen.