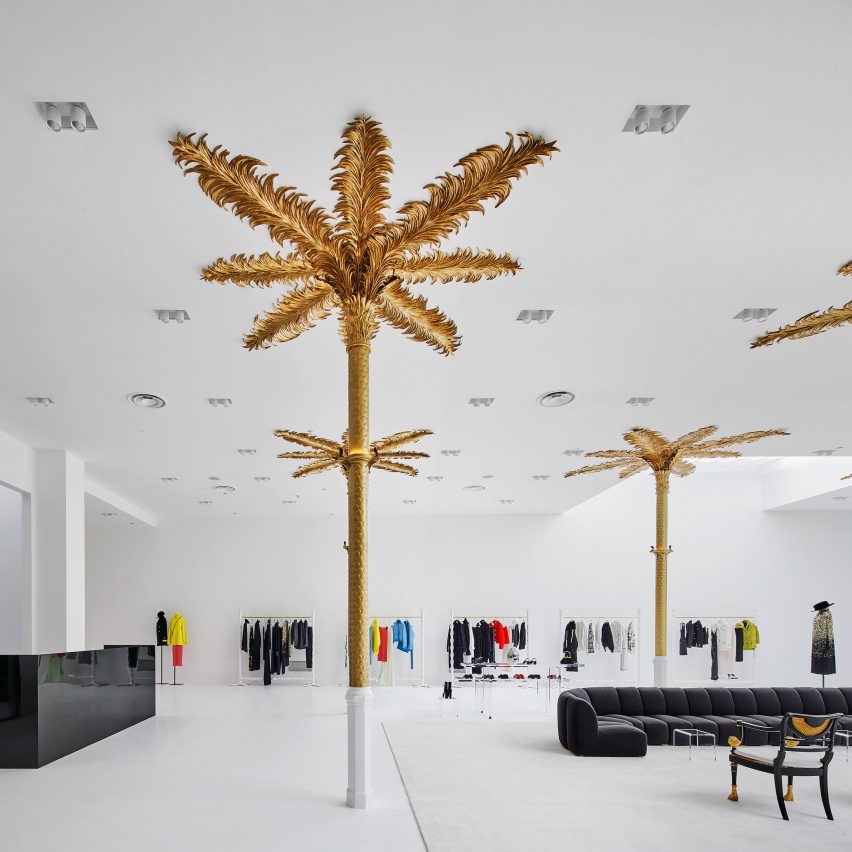 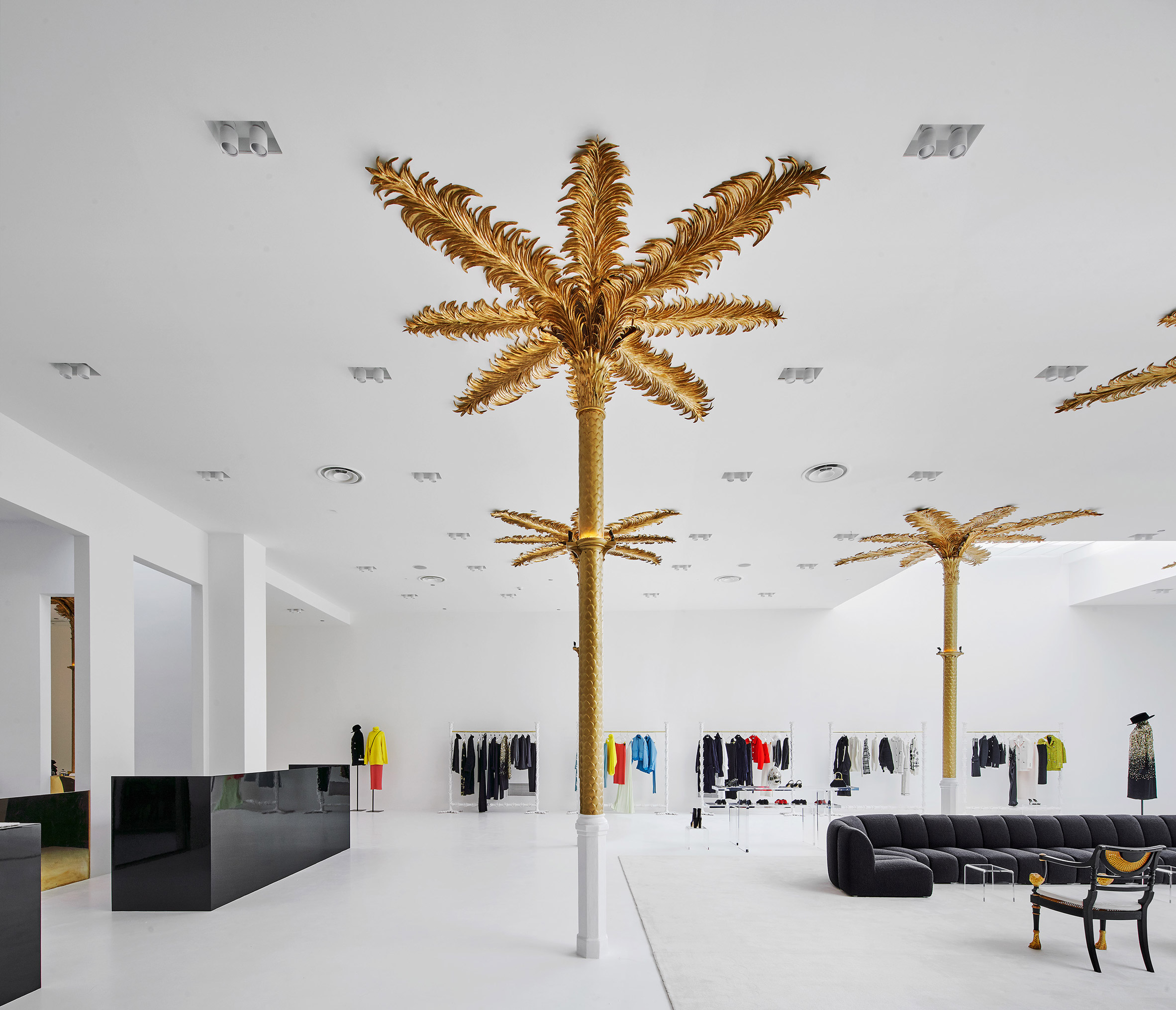 Conceived and founded by the Paris-based haute couturier Djaba Diassamidze, the minimalist store is described as an “experiential” retail space.

It sells an evolving selection of clothing, books, art, furniture and design objects by hundreds of different brands, and also boasts a brasserie-style restaurant and event space. 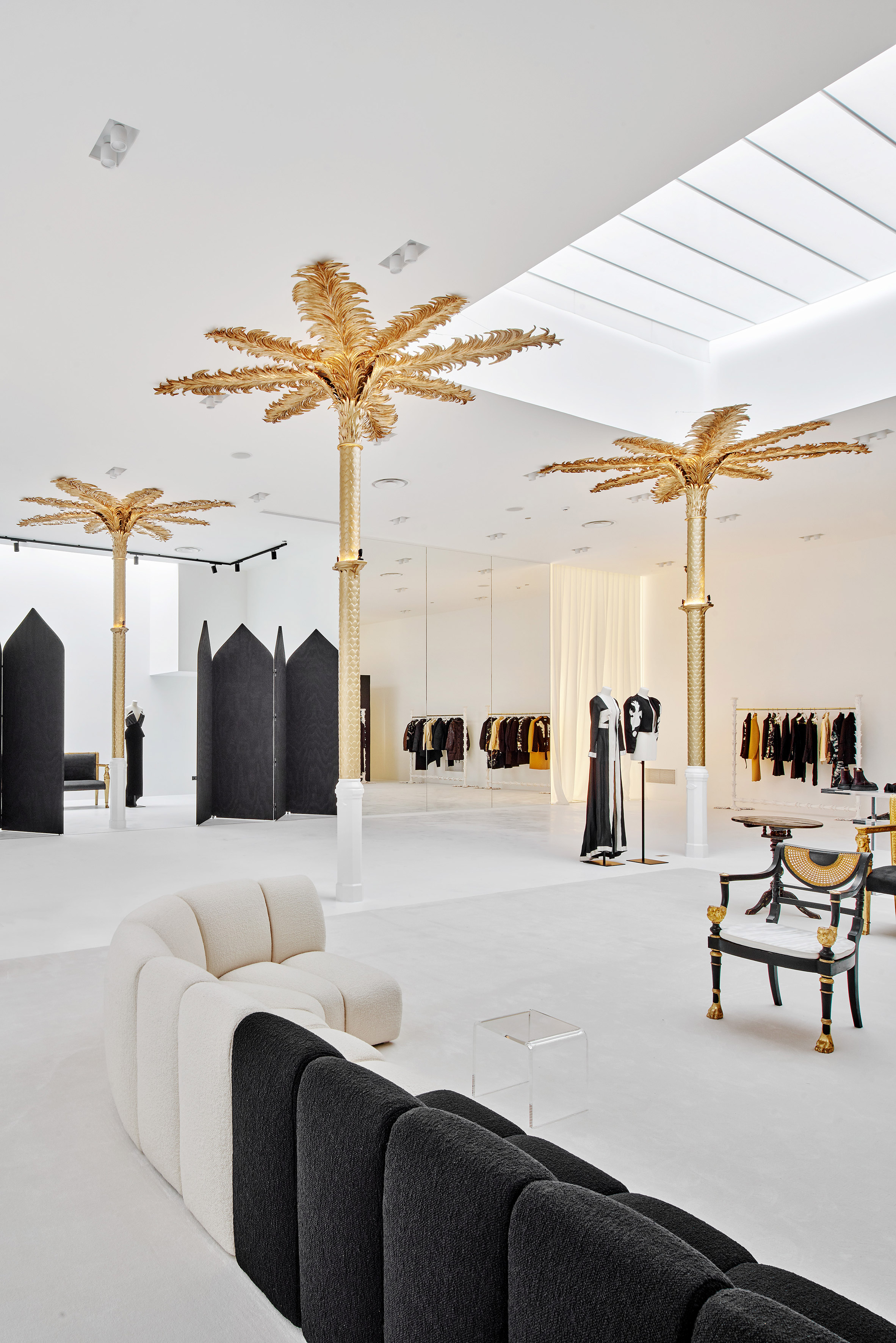 The store, along with the restaurant and the bookshop, is spread across the ground floor.

It’s divided into a series of lofty white spaces dotted with palm tree-shaped gold pillars, their fronds unfurling across the ceilings. Partitions have otherwise been largely omitted, allowing the spaces to flow seamlessly into one another. 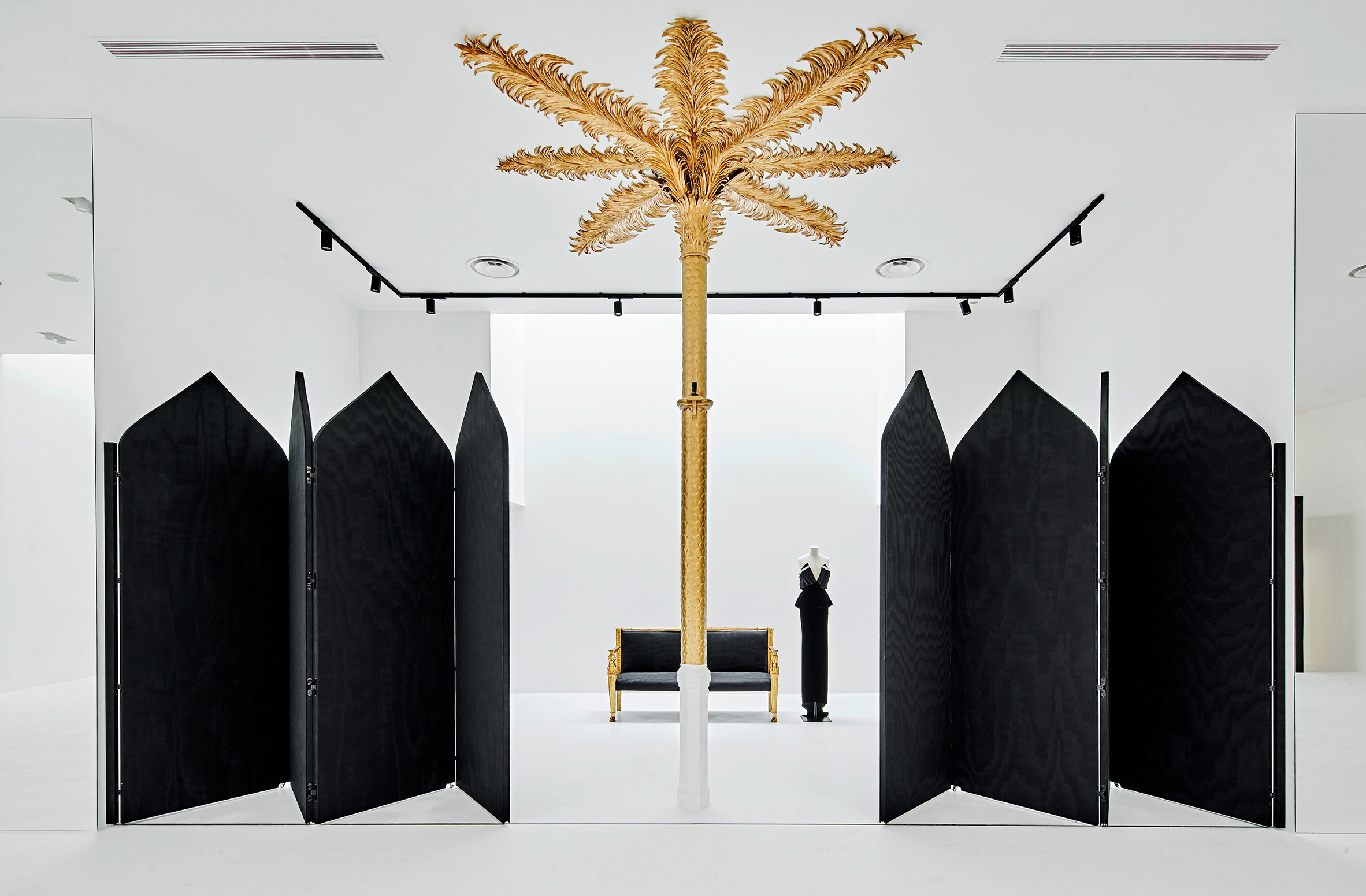 Ivory-coloured carpets and marble tiles are used on the floors to create a sharp contrast with opulent black furnishings that decoratte the space, including pieces by Muller van Severen, Impossible Project, Lomography and Bang & Olufsen.

Merchandise is displayed like art on sleek black-lacquer shelving that was custom designed for the store. 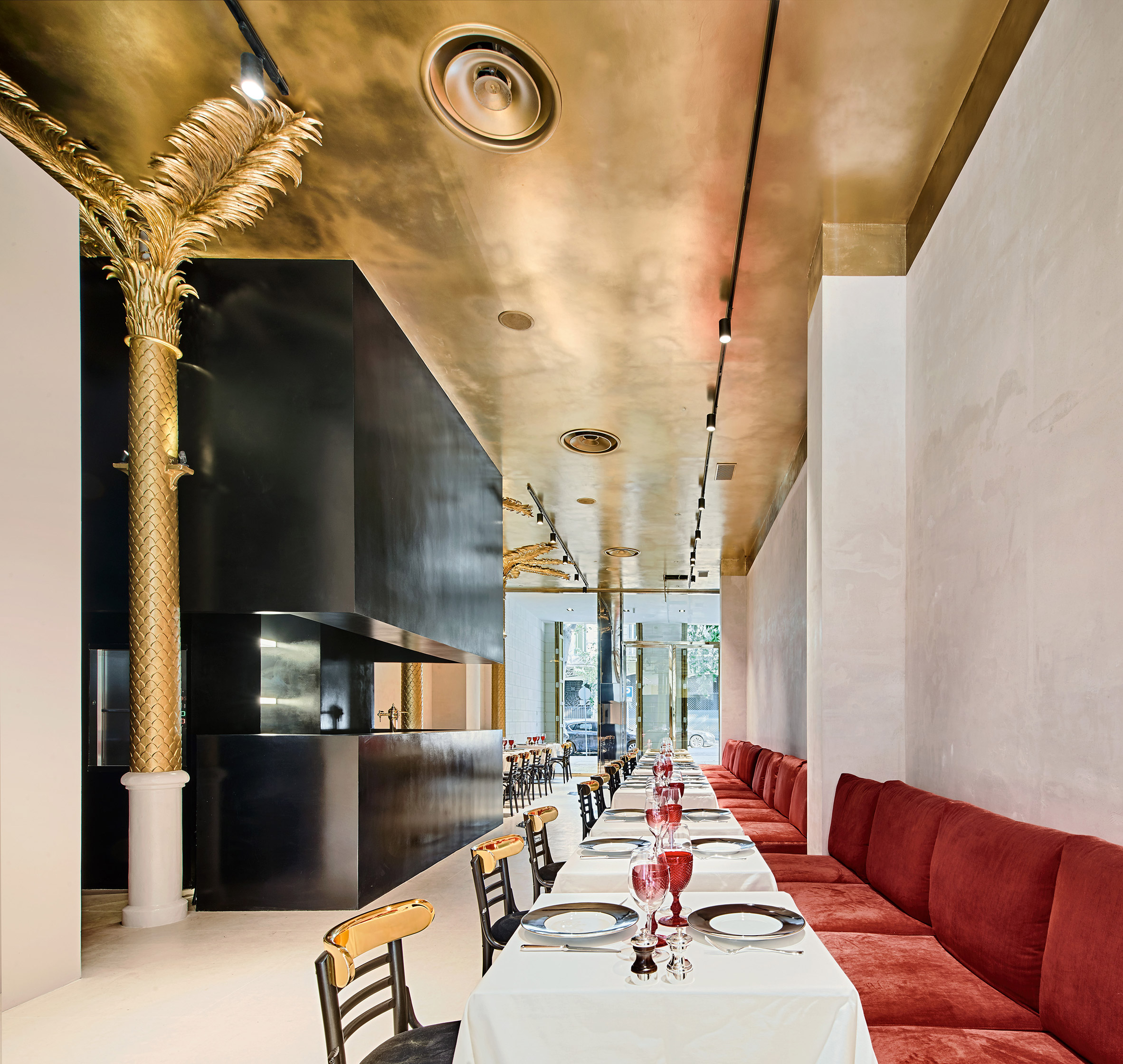 Certain features in the store, like the grandiose arched doorways, are Diassamidze’s attempt to reference art-deco-style decor. The folding screens are also meant to nod to the store’s name, Darial, which means gate in old Persian.

Classic 1963 film The Leopard inspired the aesthetic of the 70-seat restaurant, which features gold-leaf ceilings and seating banquettes upholstered in red velvet. 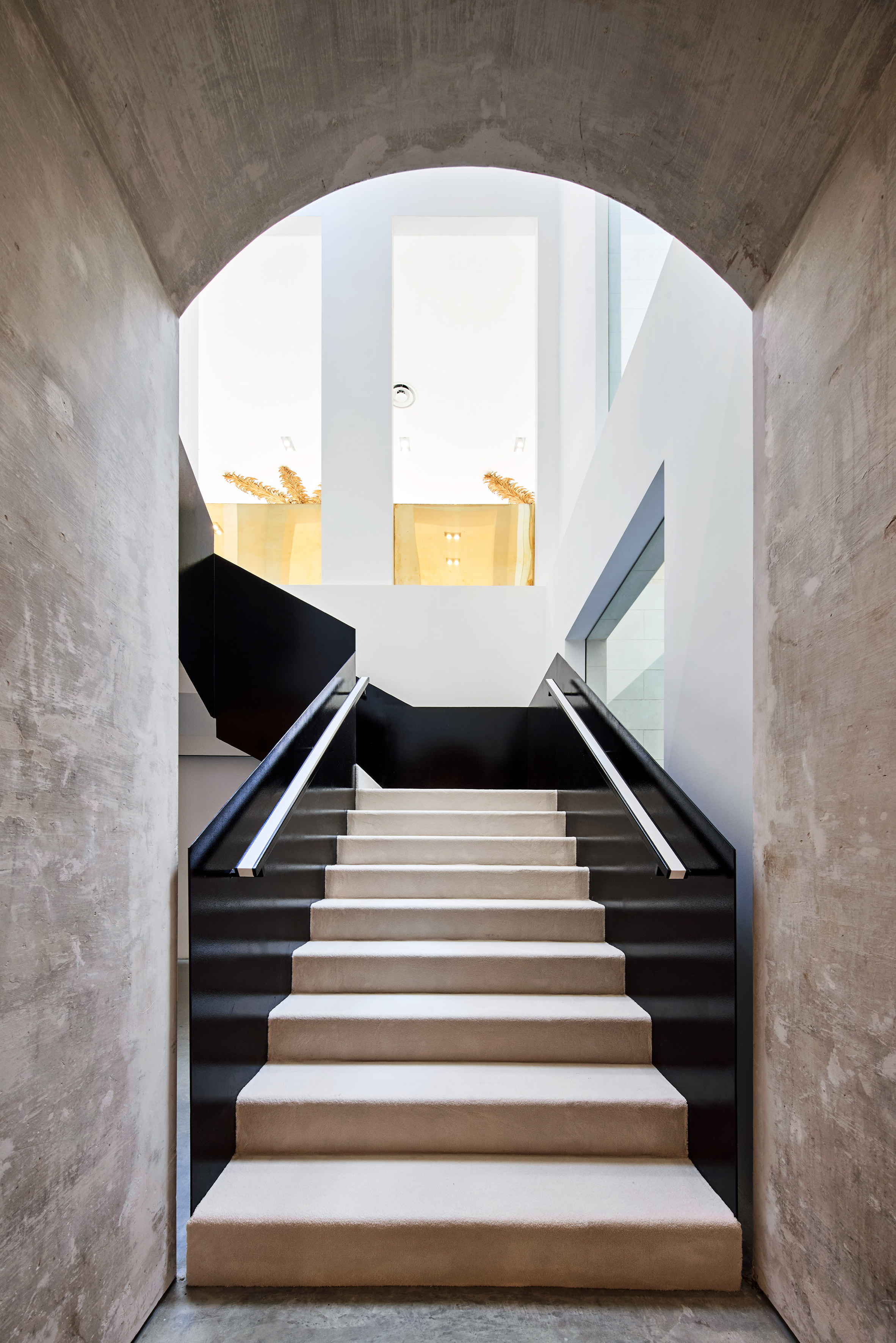 A carpet-lined staircase leads down to the gallery on the lower-ground floor, which looks out onto a courtyard.

At this level, there is also a “cloister-like” space with concrete floors and vaulted openings which is used to host temporary exhibitions and collaborations with contemporary artists. Barcelona is home to a host of design-focused retail spaces – January of this year saw the opening of a Camper branch along the city’s famous Passeig de Gracià. The footwear store is covered in concave terracotta tiles, which serve as display shelves for the various shoe styles on offer.