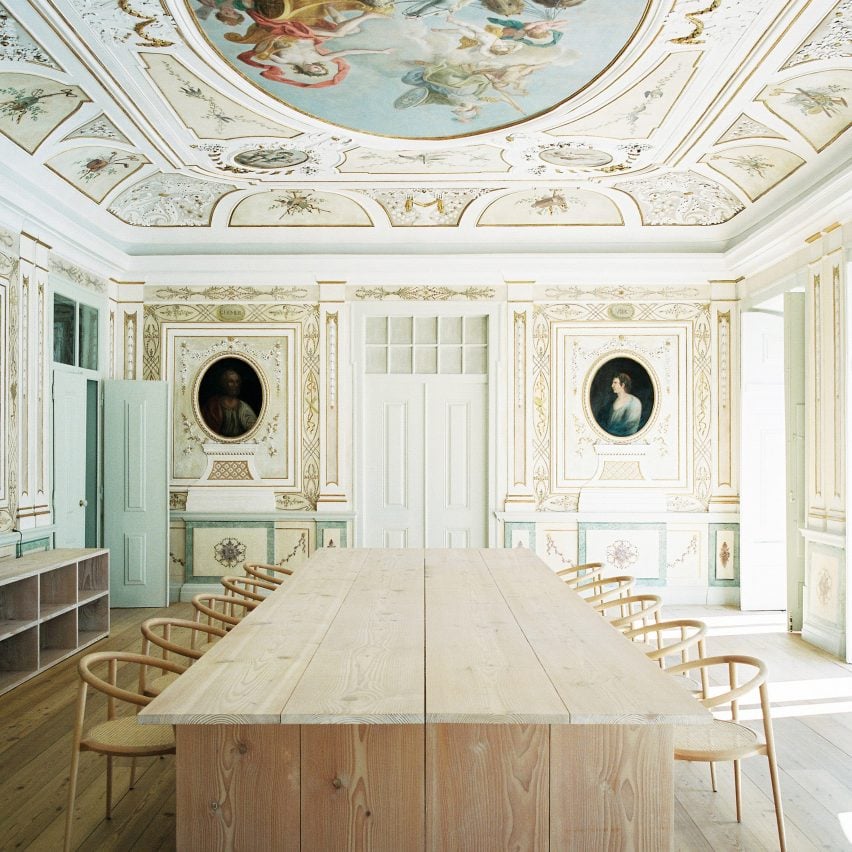 Aires Mateus‘ four-storey studio, which has been named Atelier Cecílio de Sousa after the street it’s located on, contains working and meeting spaces, two model-making areas and a multipurpose room.

Existing decorative features throughout the 18th-century building have been restored, while the damaged roof structure has been entirely rebuilt. 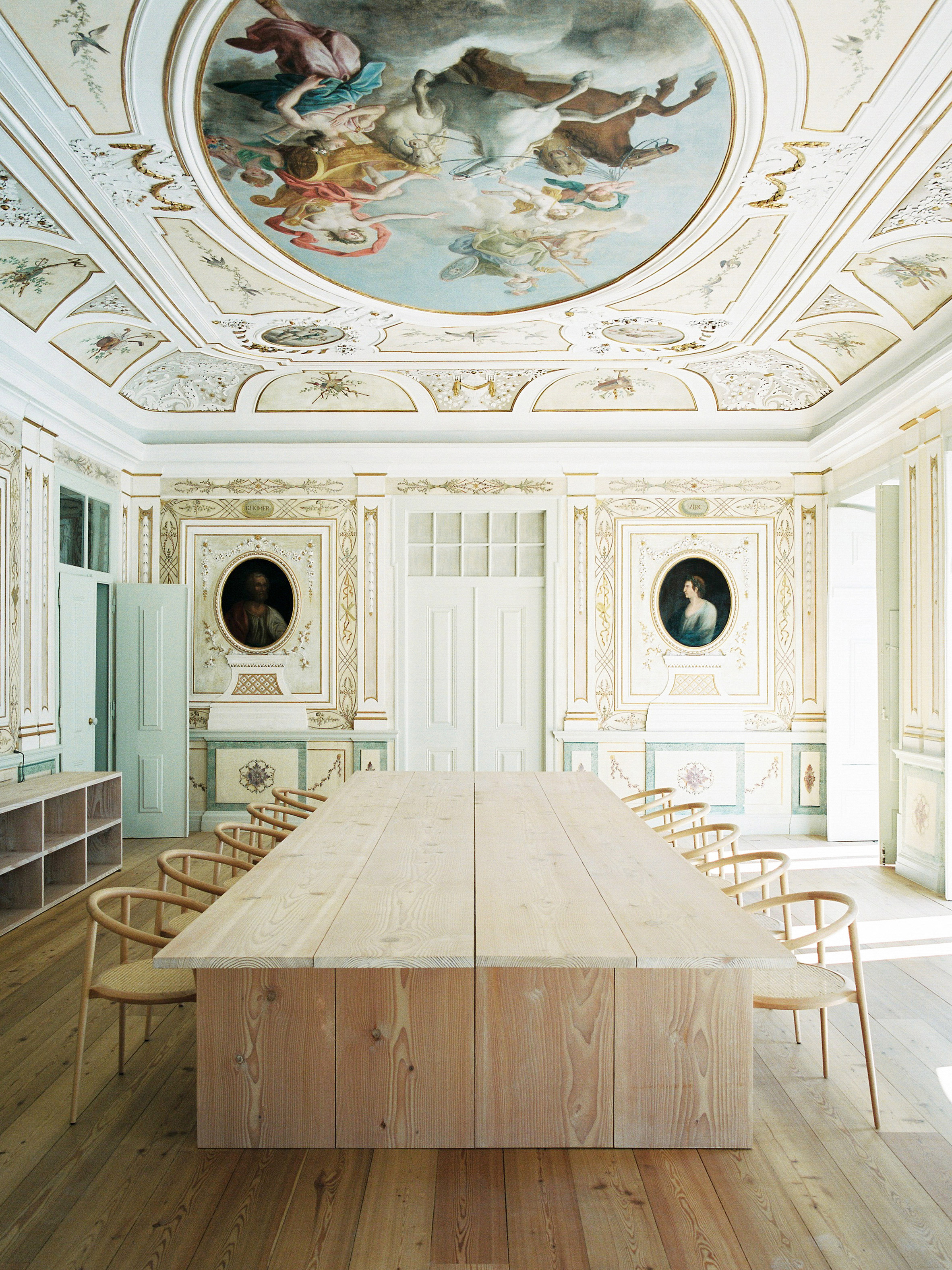 The historic building comprises a two-storey building that was originally built in 1779 and two additional storeys added 20 years later. The four levels were in varying need of renovation work.

Rooms up to the third floor required superficial touches of restoration, like fresh coats of paint and replacing rotting timber floorboards with solid planks of wood.

However, on the third level, part of the floor that was caving inwards and affecting painted ceiling panels below was replaced. The building’s disintegrated roof was also rebuilt. 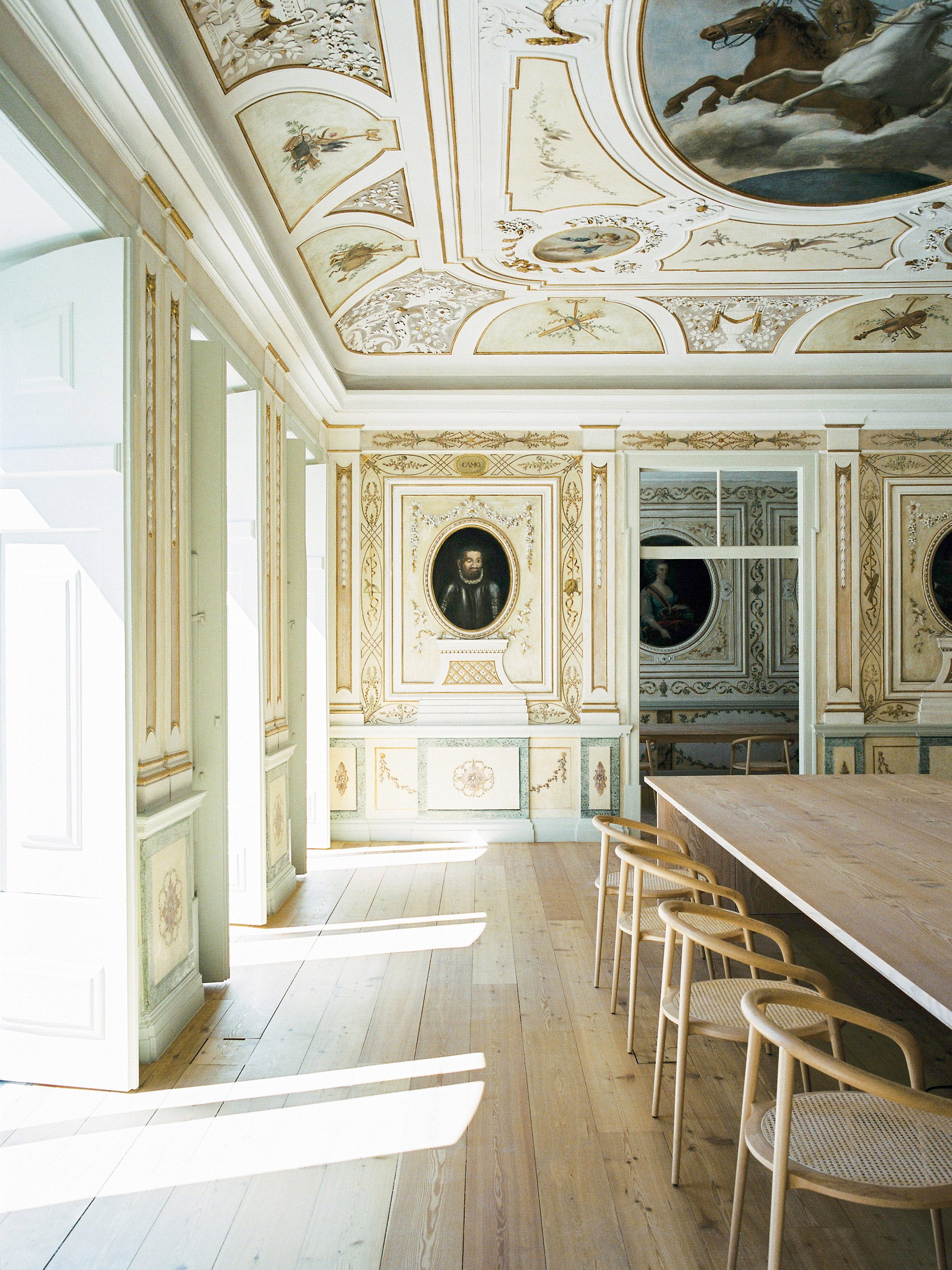 “Throughout the whole intervention, the goal was to keep the integrity of the existing building, as well as its spatial, constructive and formal characteristics,” Cassandra Carvas, architect at Aires Mateus, told Dezeen.

Several other features have been retained, including the framework, stonework, coatings, friezes, shutters, cornices and balustrades on the facades. 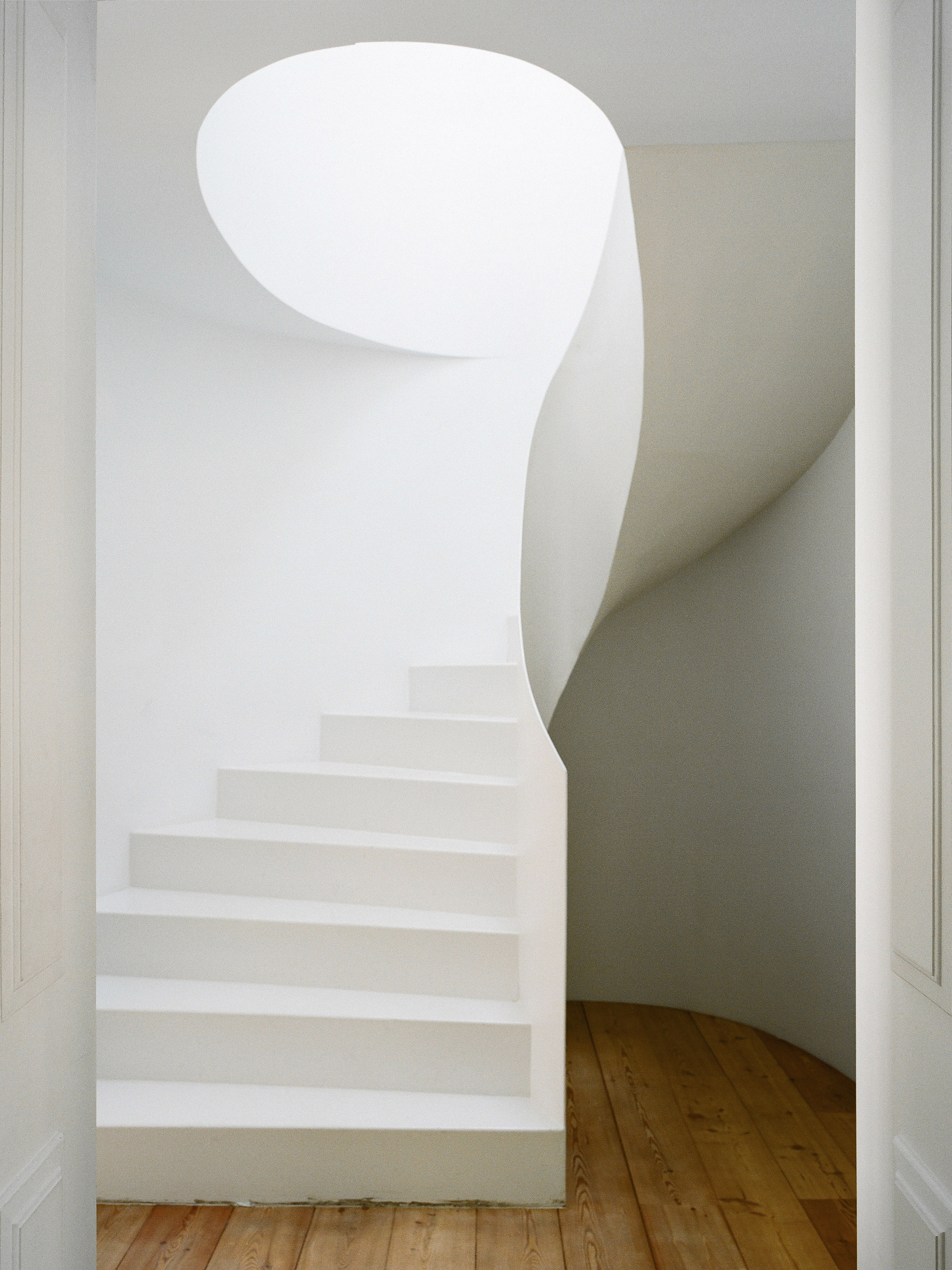 Two meeting rooms and two areas for models are dotted across the building’s four levels, while the remaining space is dedicated to workstations.

The focal point of the building is the second-floor meeting area called the Noble Room, which has elaborate decorative details that were retained .

Specialised restoration work was required on the tiling found in the room’s skirtings, wainscoting and framing panels, as well as the stucco and painted elements on the ceiling. 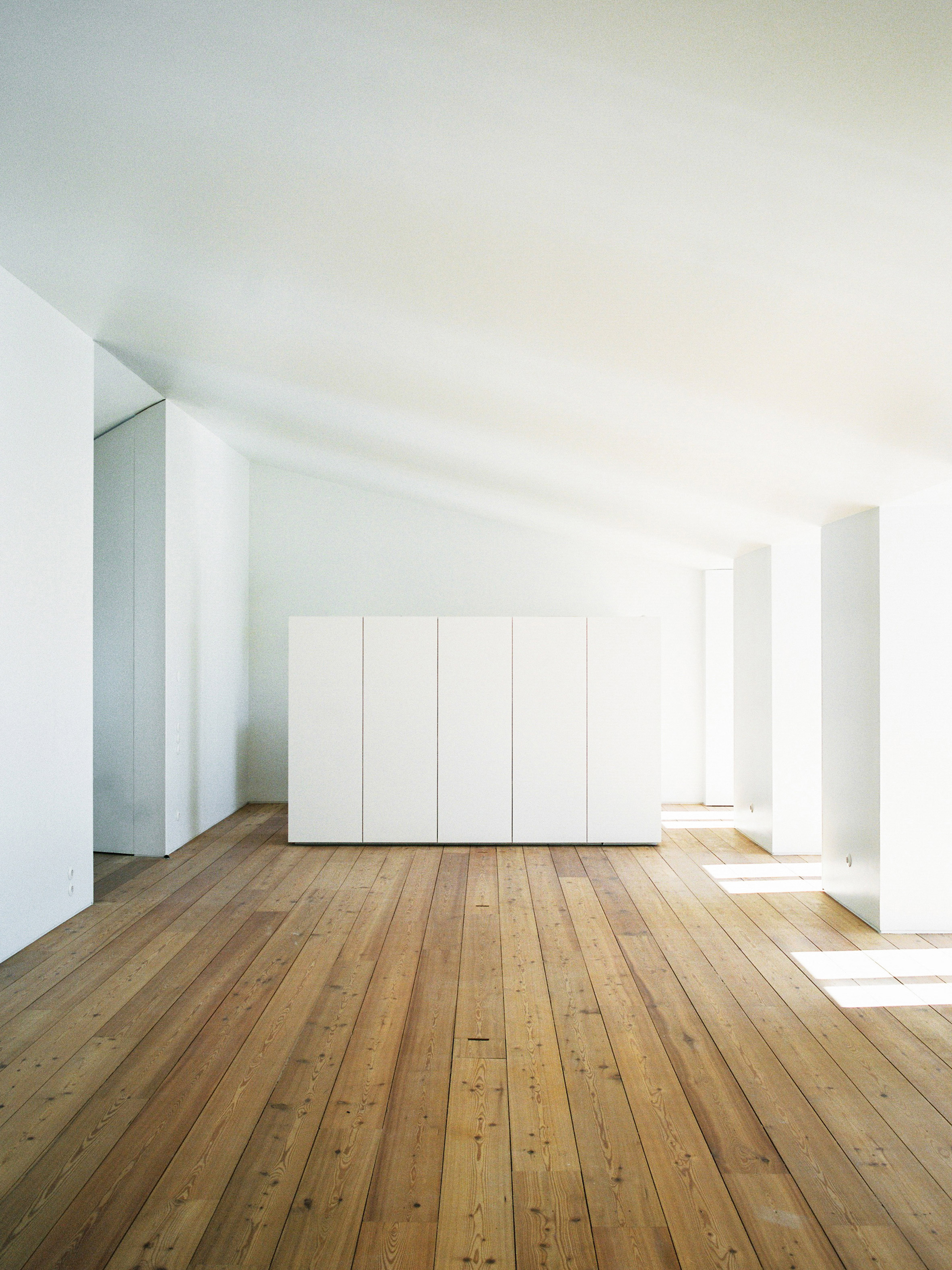 Wooden frame chairs are arranged around a pale timber table at the centre of the room.

The room has been given a balanced and symmetrical layout so that furnishings sit in line with the paintings in stucco oval frames. Above, a large ceiling mural depicts an idealistic scene of figures on horseback and cherubs surrounding them. 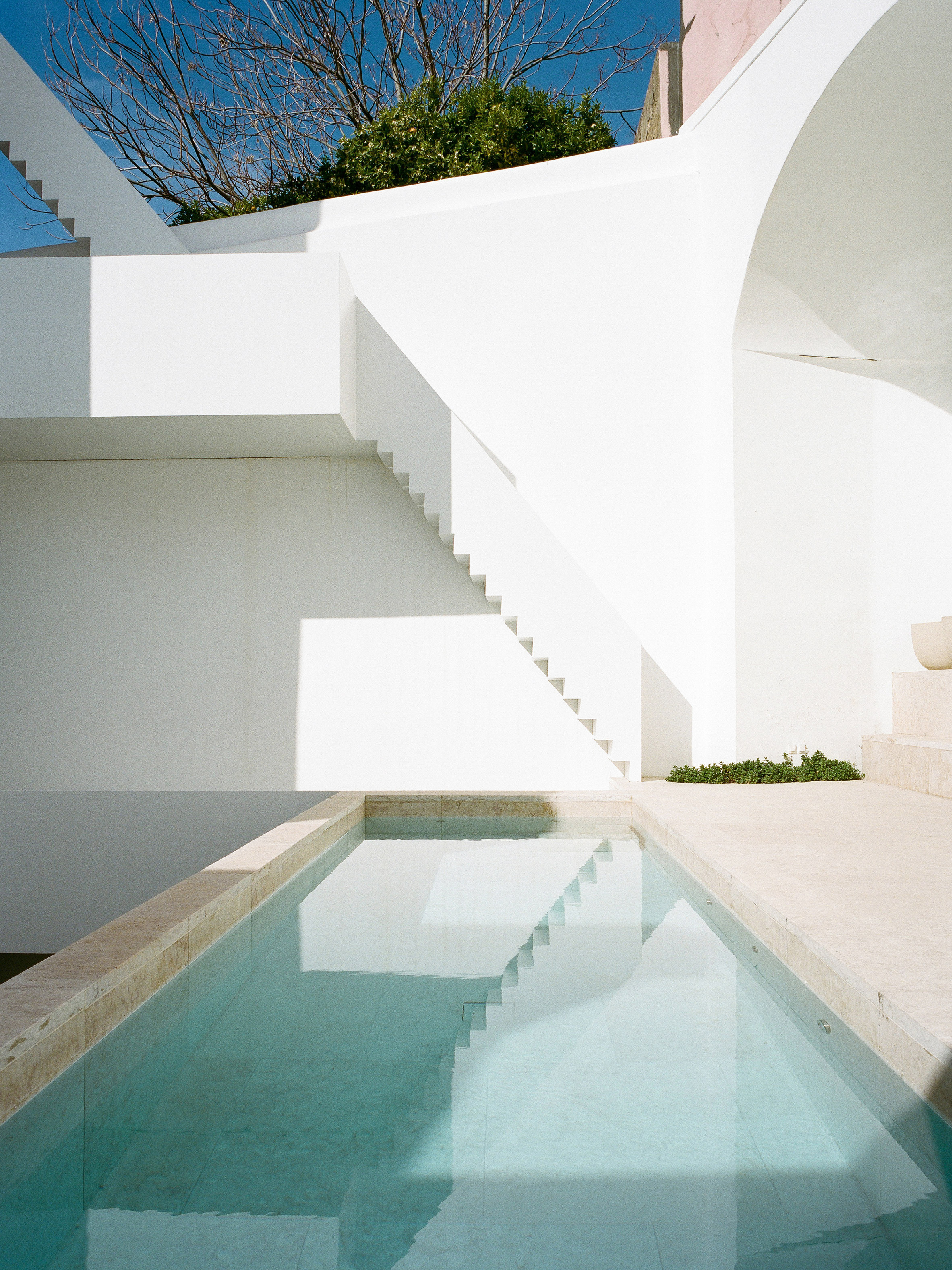 An all-white curved staircase connects the third and fourth floor. With windows on the north facade, a large room is used as a multipurpose space, where the studio holds workshops and lectures.

Storage and technical spaces are placed on the ground floor, alongside a parking area.

Several small, shed-like structures from previous renovation projects were removed from the office’s double-height courtyard. This space has been turned into a garden with a water mirror. 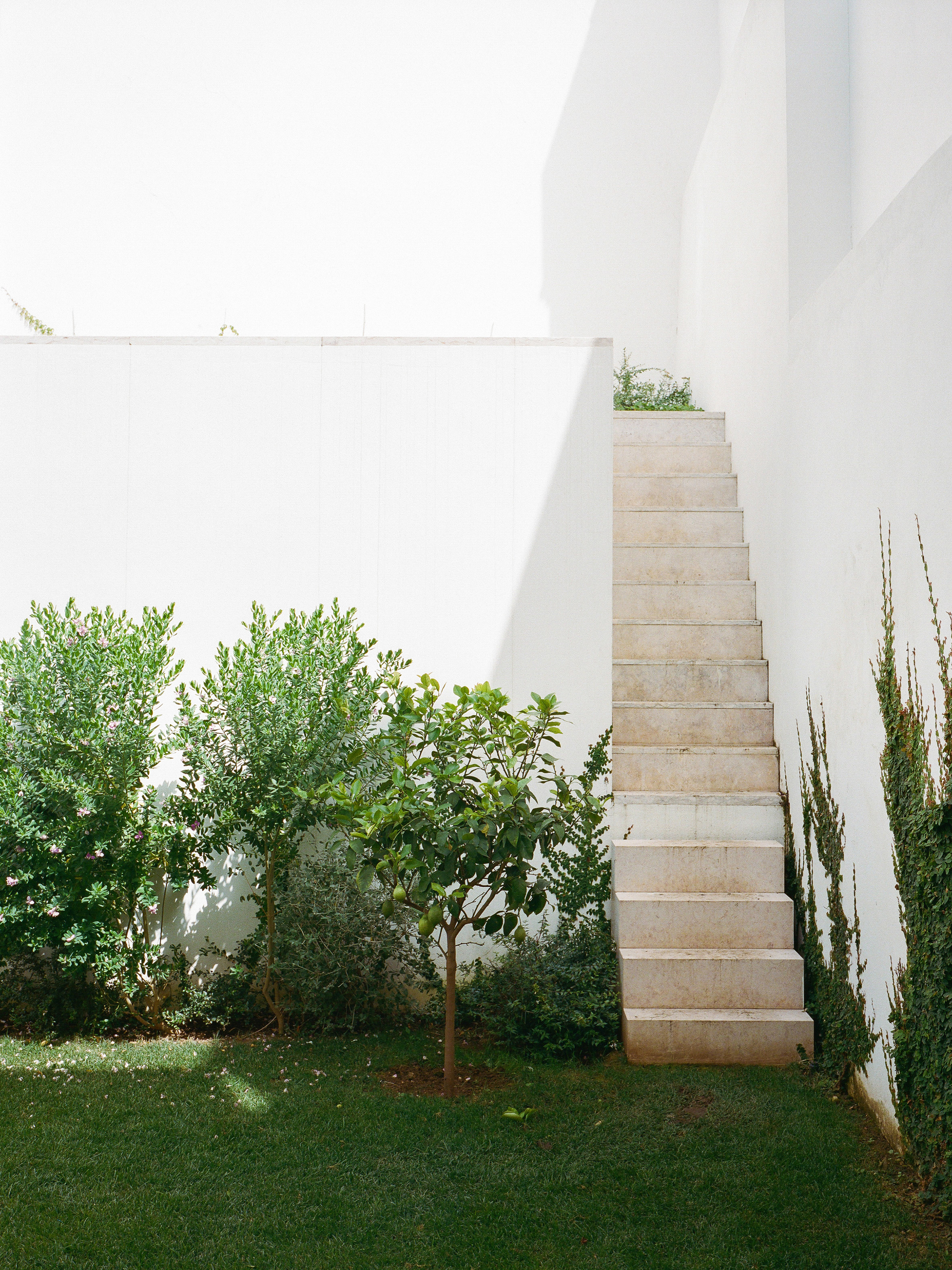 The lavish interior of this office is a far cry from the often minimal and monolithic work by the studio, which was founded by brothers Manuel and Francisco Aires Mateus.

A deep, gabled opening marks the entrance of a faculty building the studio created in Belgium, whereas irregular voids punch through the facade of a community centre it completed in Grândola.

Photography is by Rui Cardoso.