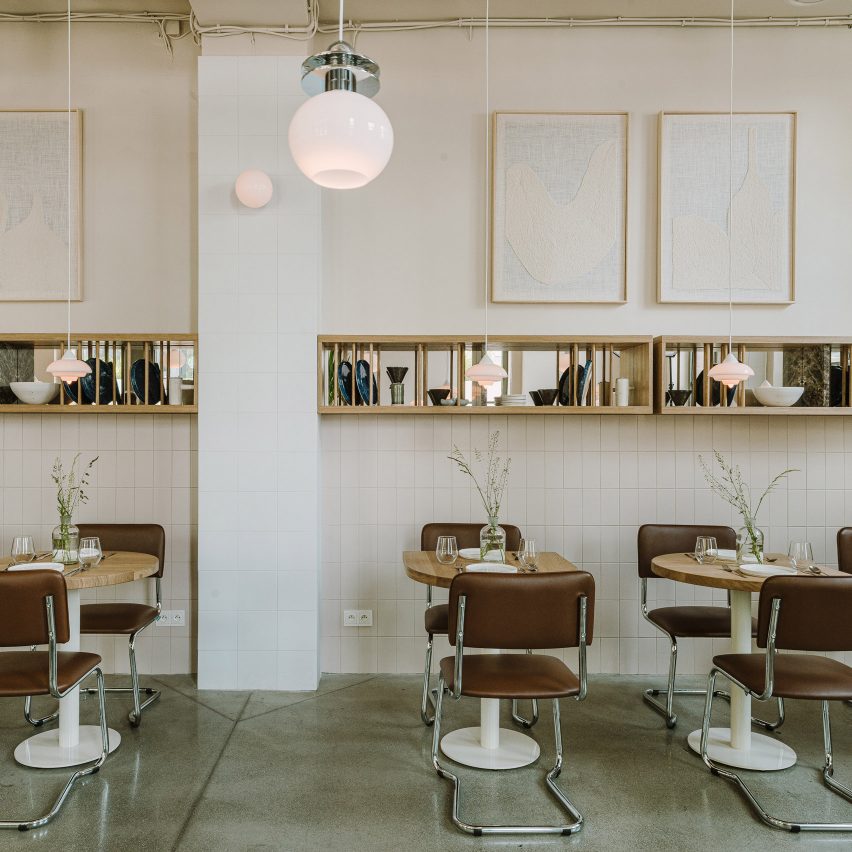 Agnieszka Owsiany Studio worked to incorporate key motifs of Bauhaus design into this Israeli restaurant, which has opened in Poznań, Poland.

Serving up a plant-based menu of Israeli-inspired dishes, Nadzieja has been completed with a bright and warm interior that references sunny Tel Aviv and its abundance of Bauhaus architecture.

Tel Aviv has over 4,000 Bauhaus-style buildings that were constructed by Jewish architects, who immigrated to the Israeli city during 1930s as the Nazis came into power in Germany. 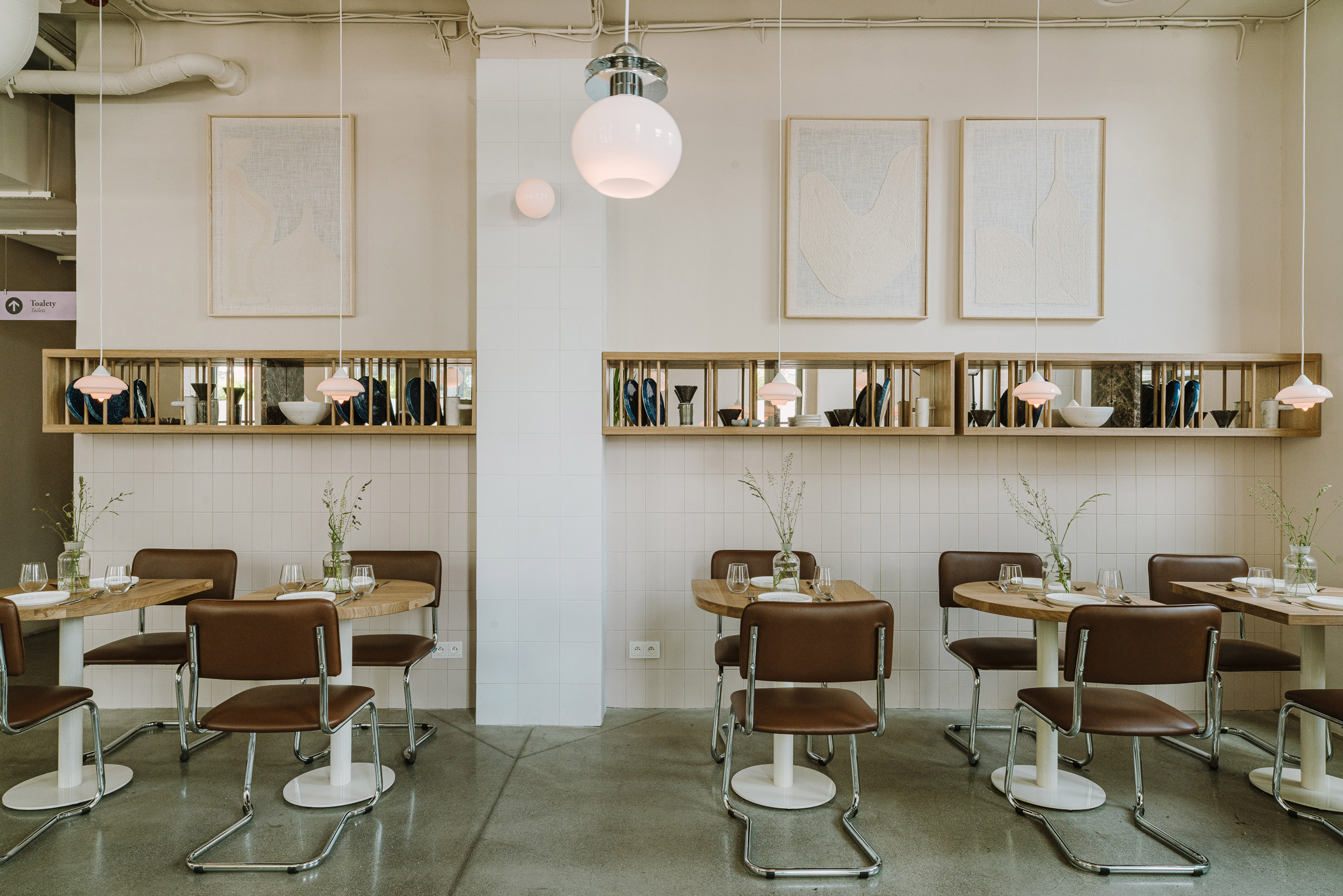 Agnieszka Owsiany Studio kept this in mind when devising the new fit-out of the restaurant, which had previously been an Asian udon eatery.

“The space had been very strong visually – dark green walls, lots of patterns, materials and a black-painted ceiling above it all,” the studio’s founder, Agnieszka Owsiany, told Dezeen.

“It was very heavy, so the space looked much smaller. My first impression when I got there was that I had to put as much light inside this space as possible.” 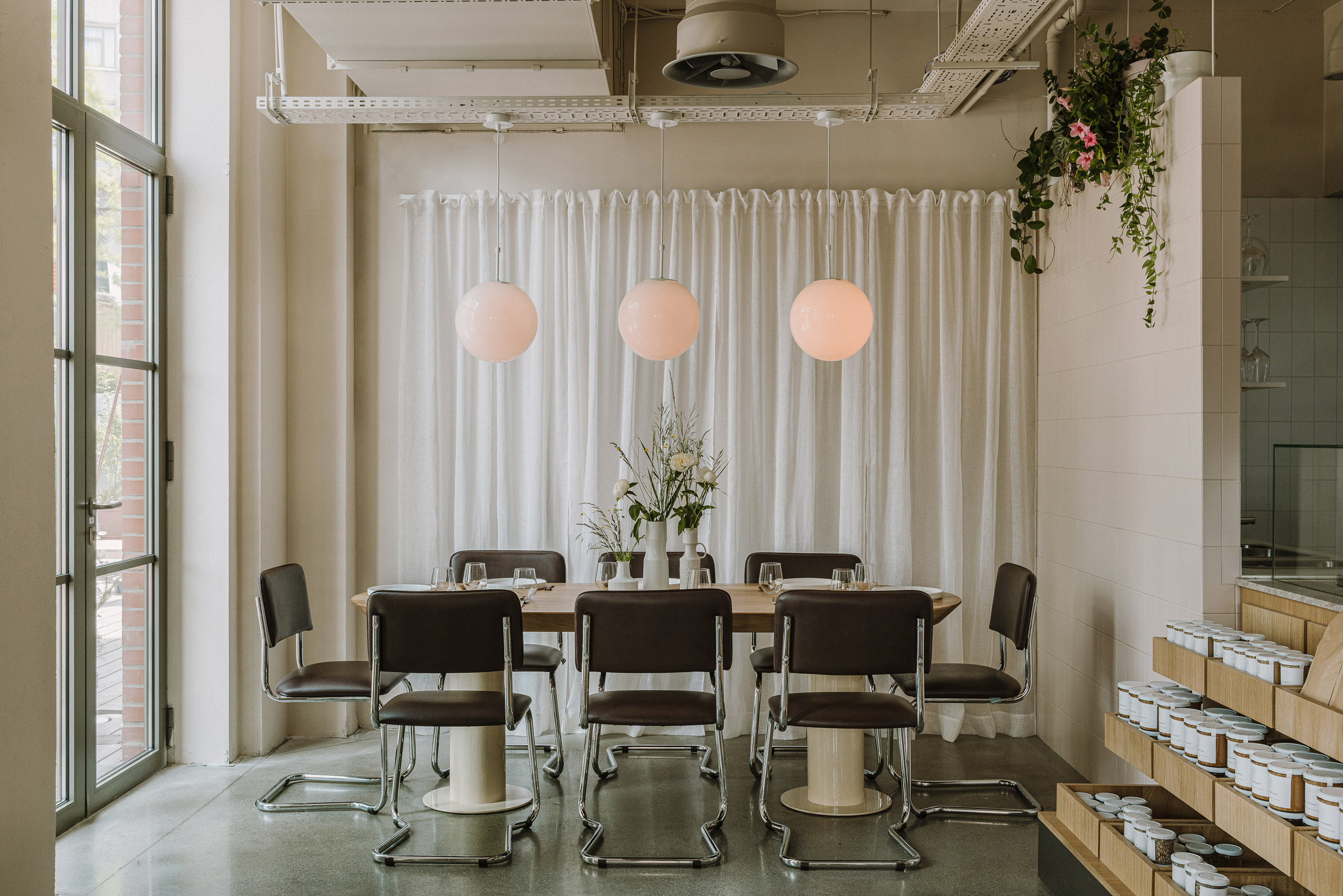 Several walls throughout the 80 square-metre restaurant have been clad in simple white tiles, in a nod to the pale Bauhaus buildings that populate Tel Aviv – a feature which eventually lent the destination the term of White City.

Some other surfaces have been painted light beige, while a white curtain serves as a backdrop to the group dining area.

“[The curtain] creates this feeling of a small room inside the open space, making it more cosy,” explained the studio. 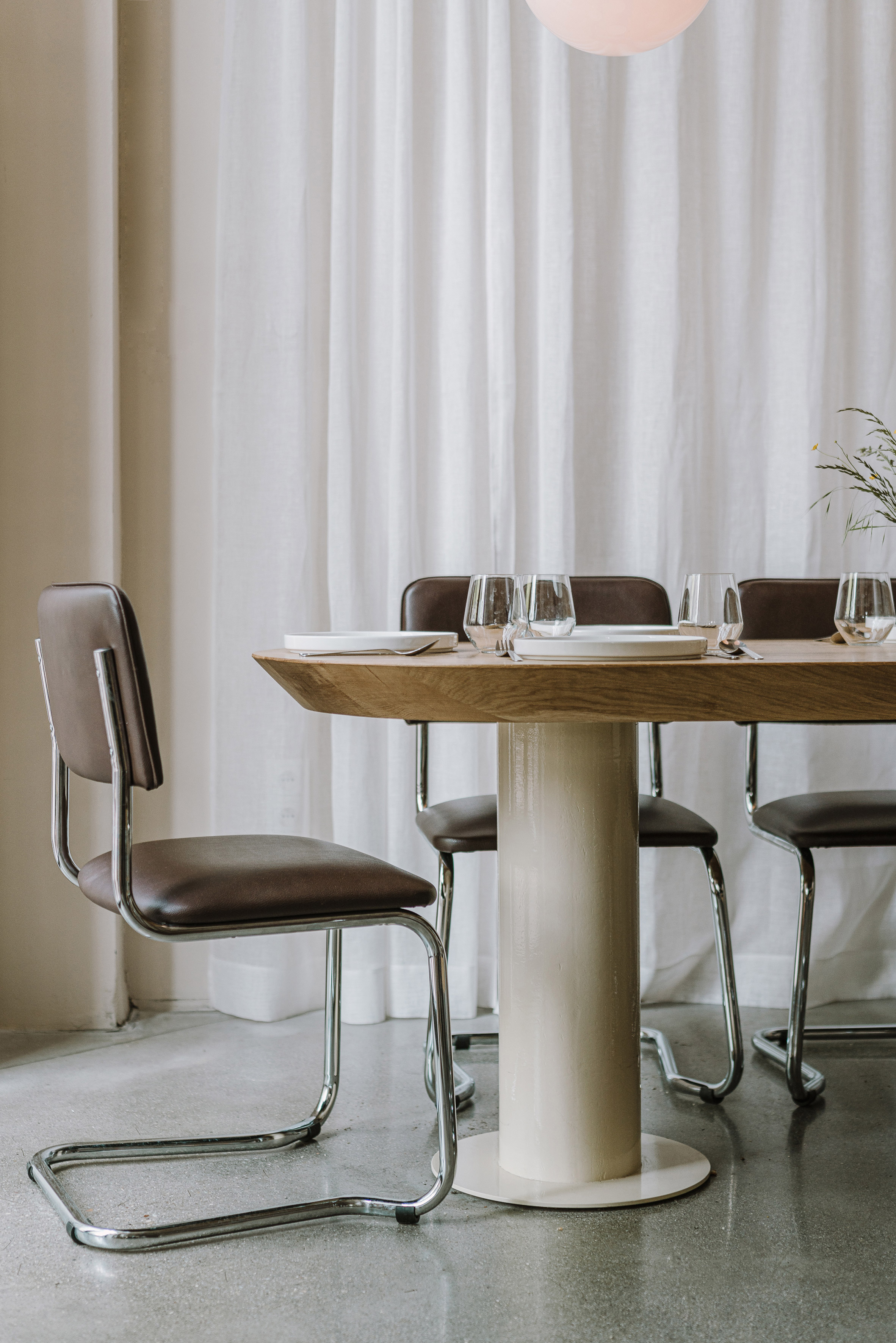 At the centre of the space is a long table with an eight-centimetre-thick wooden countertop. It’s surrounded by brown-leather chairs with tubular steel frames, echoing Bauhaus master Marcel Breuer’s famous Wassily chair.

These chairs also appear in the main dining room, where there’s a mixture of seating options – as well as traditional low tables, there are also tall counters crafted from ivory granite and black bistro-style high chairs. 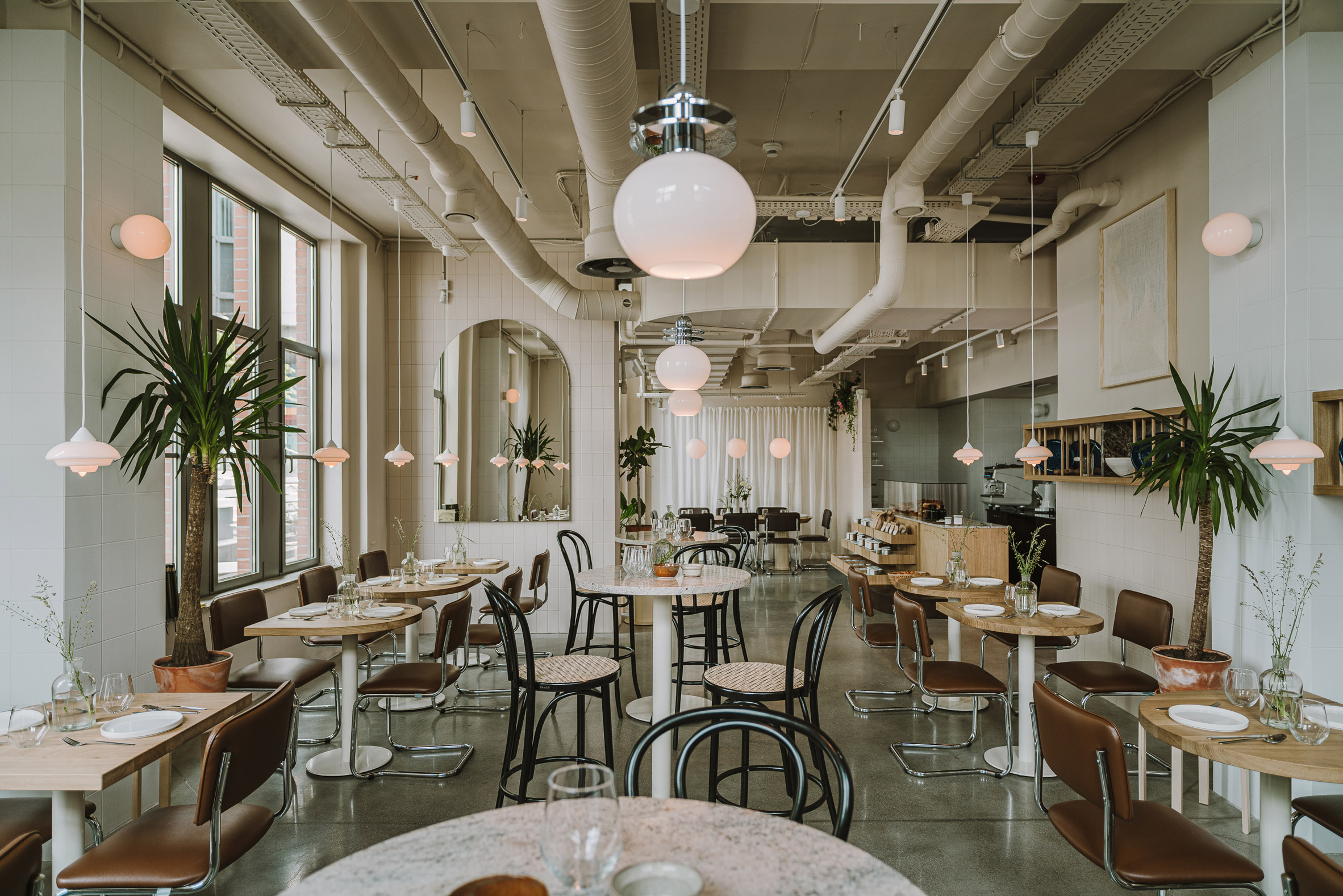 Windows have been left curtain-less to let in the maximum amount of natural light. Pendant lamps that dangle from the ceiling can also be switched on as evening falls and dimmed to foster a more intimate ambience.

“Their chrome details and spherical shades made with white glass again refer to the Bauhaus style,” added the studio. 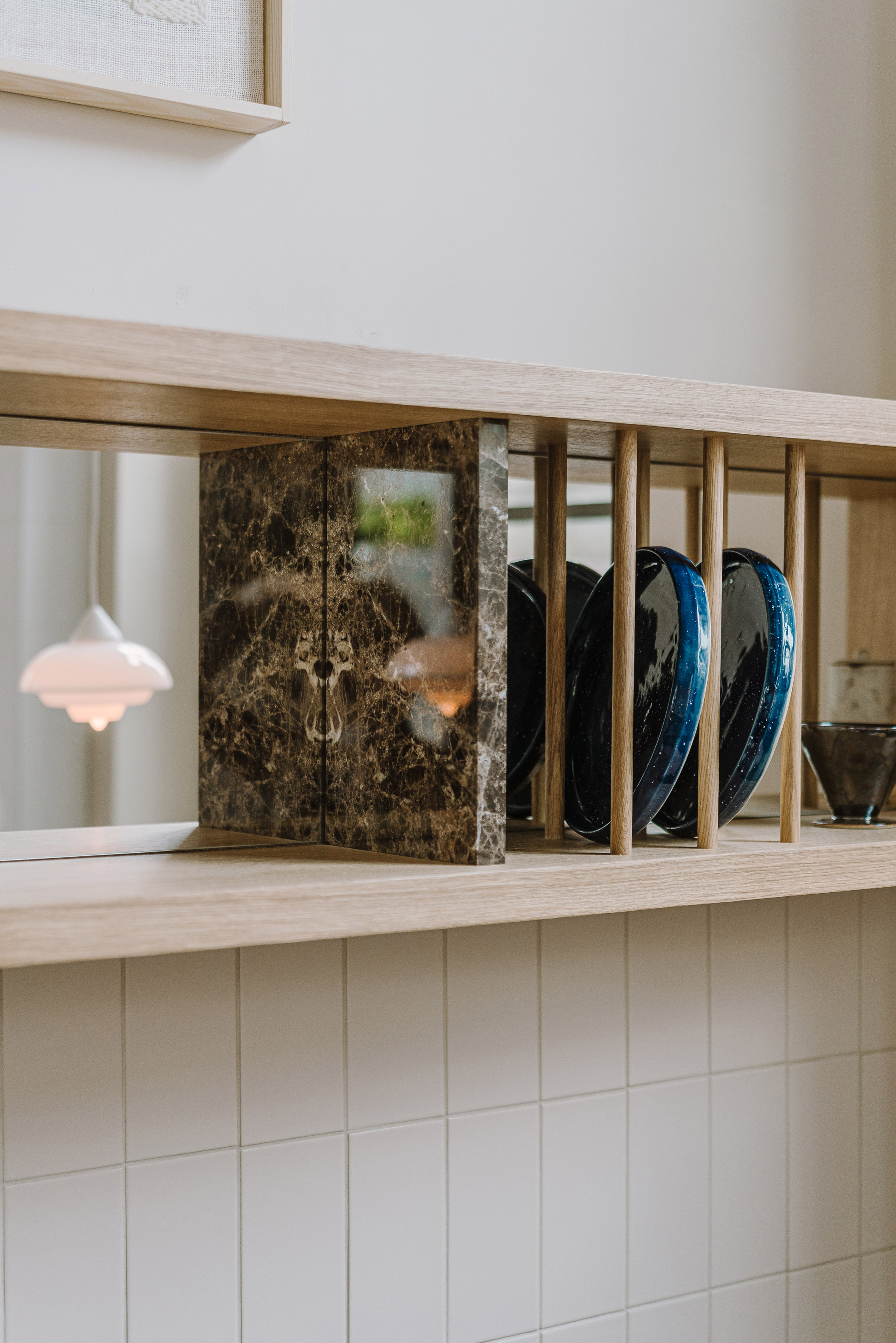 Various earth-toned ceramics crafted by Nadzieja’s owner have been slotted amongst the restaurant’s timber shelving units as decor.

Owsiany also used linen and wool to create a handful of artworks for the walls. 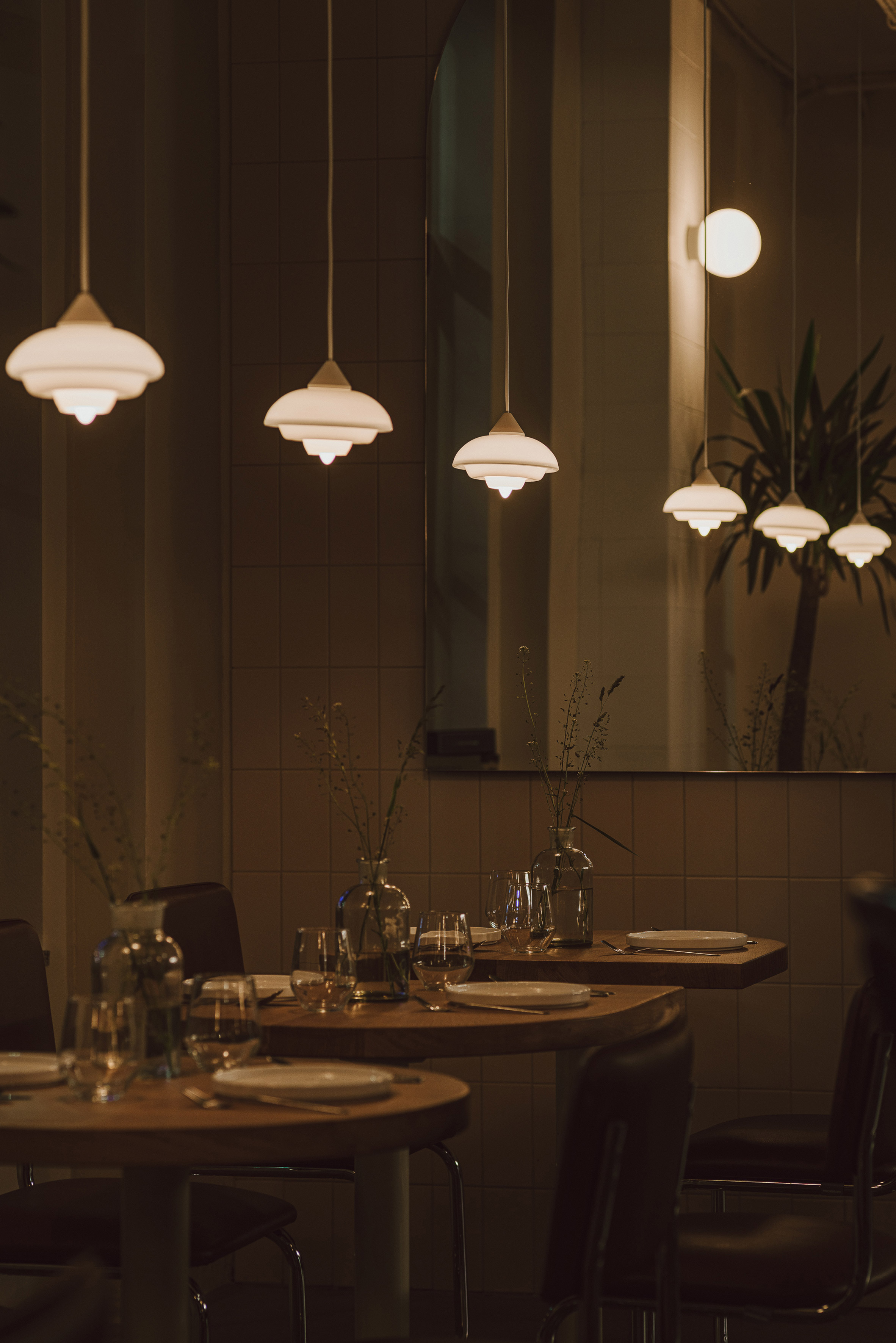 This year marks the 100th anniversary of the renowned Bauhaus design school, which operated from 1919 until 1933.

The work produced by students of the time – which include figures like Walter Gropius and Anni Albers – continues to influence several architects, designers and brands today.

Lara Bohinc looked to the “pure yet intricate” geometric minimalism of Bauhaus design to create a range of tables, while ZigZagZurich emulated the school’s use of colour and pattern to produce a line of blankets.

To find out more about the Bauhaus, read Dezeen’s guide.