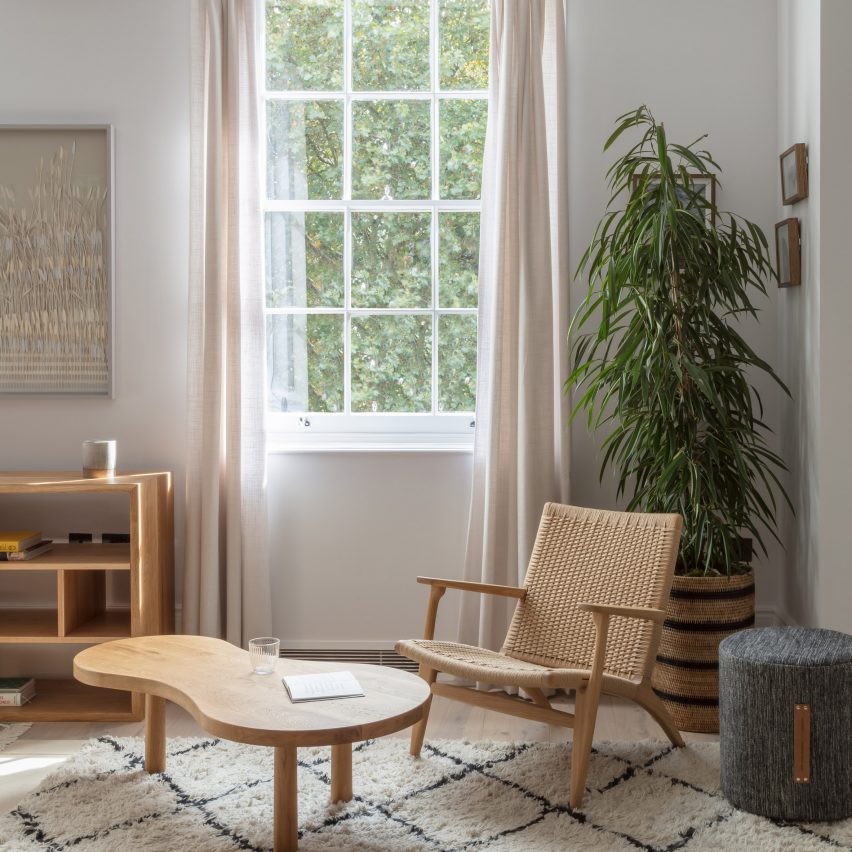 A row of heritage-listed townhouses in central London is now home to the Inhabit hotel, which Holland Harvey has designed to have relaxed, Scandi-inspired interiors.

The 88-room Inhabit hotel, which takes over six heritage-listed Georgian townhouses, had previously contained a labyrinth of rooms which were conventionally divided into front- and back-of-house. 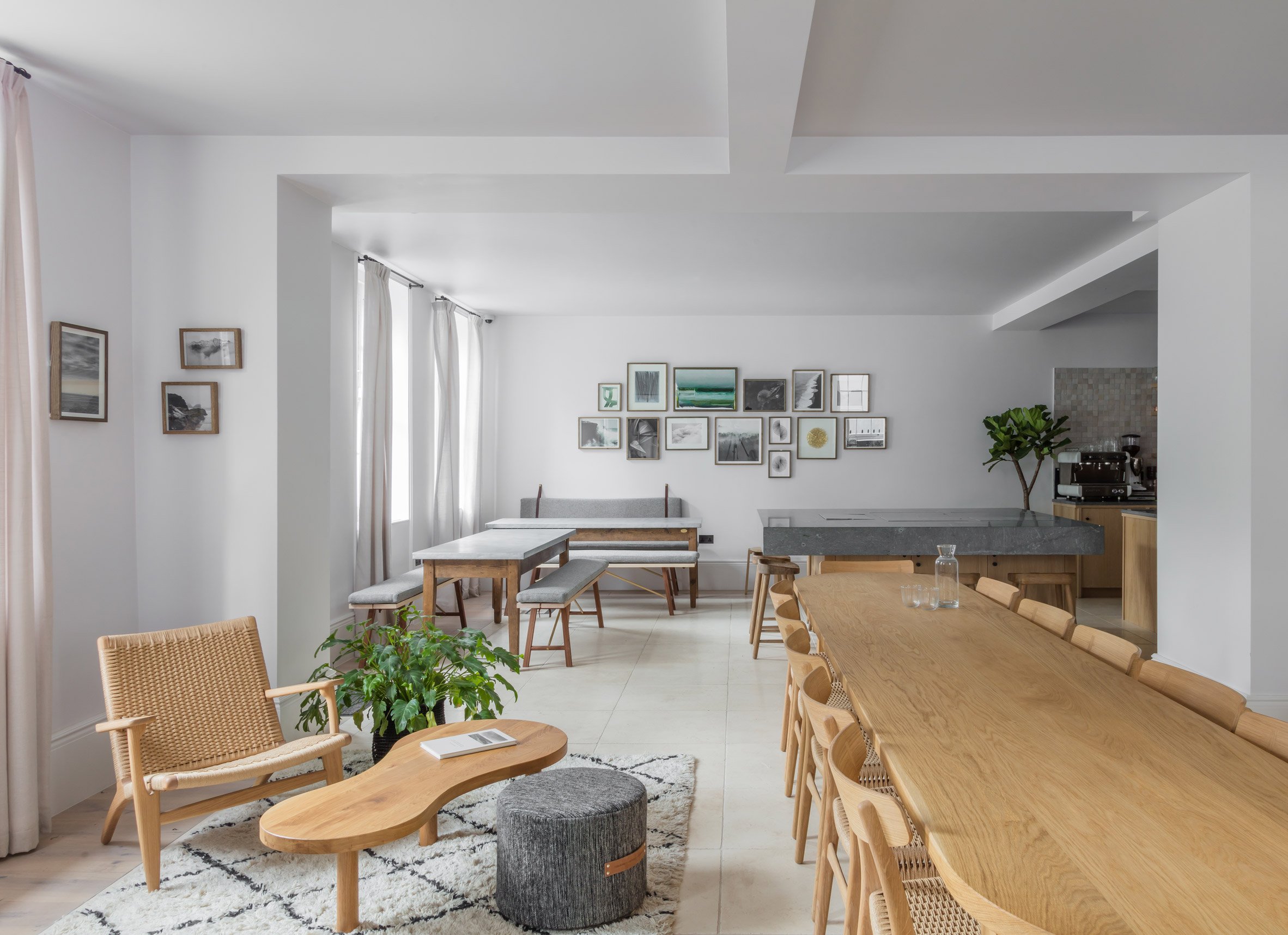 East London-based practice Holland Harvey has now overhauled the building – which previously functioned as a hotel – to have a less strict layout, spurring guests to venture outside of their rooms and wander throughout the communal areas.

“By fundamentally rethinking the way in which the hotel could operate, we were able to reconfigure the building to create legible, open-plan spaces for guests to enjoy which are heritage-led and sympathetic to the original layout,” the practice told Dezeen. 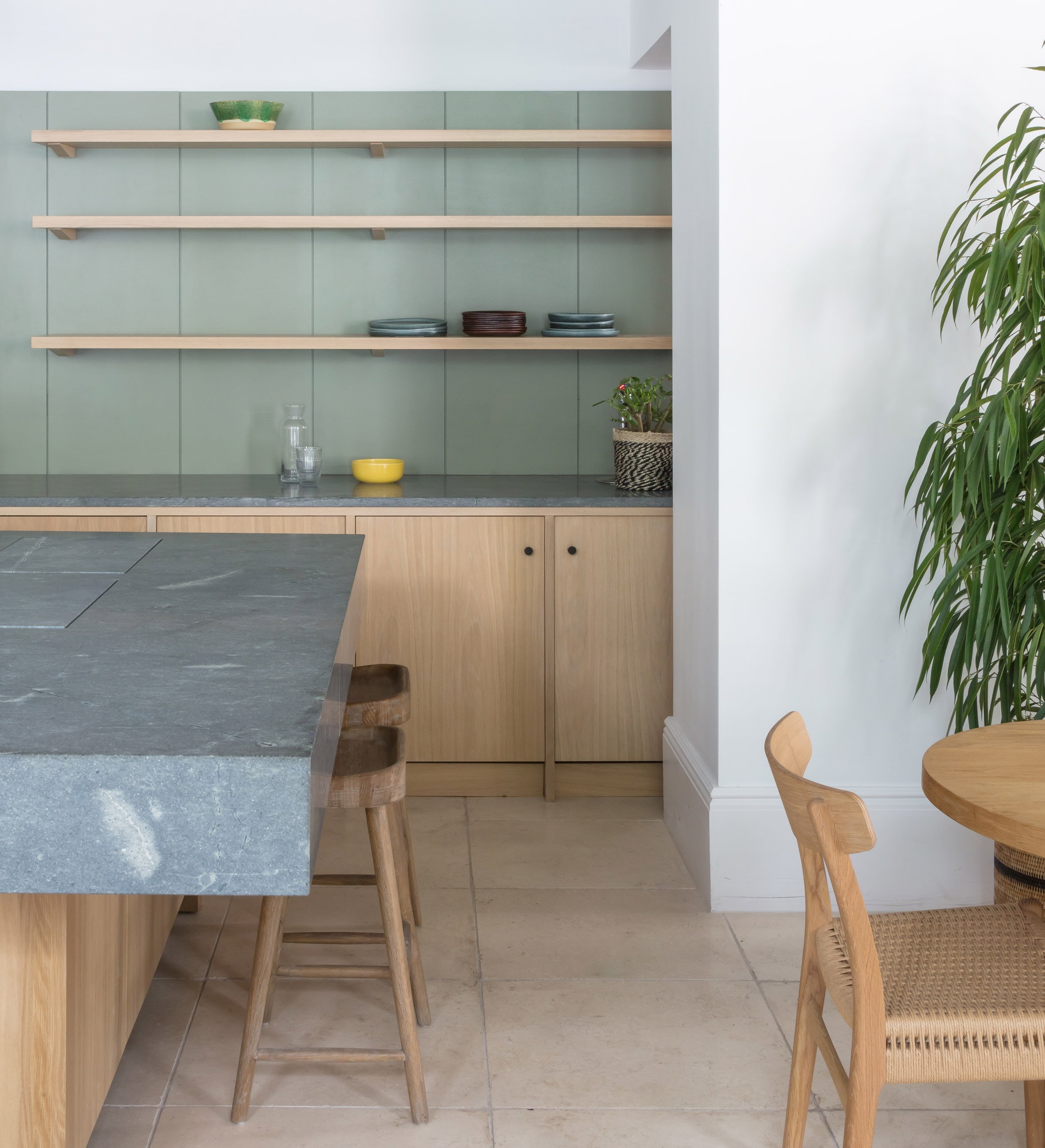 Partitions have been knocked through to form a large, open-plan kitchen that adjoins to a dining area. A majority of elements in the space – from the chunky, granite breakfast island, to the sandstone tile floors – have been crafted from natural materials.

“We were interested in the principles of biophilic design to create a connection with materials and our environment,” explained the practice.

“We therefore avoided the use of anything artificial – [in the hotel] stone is stone, wood is wood.” 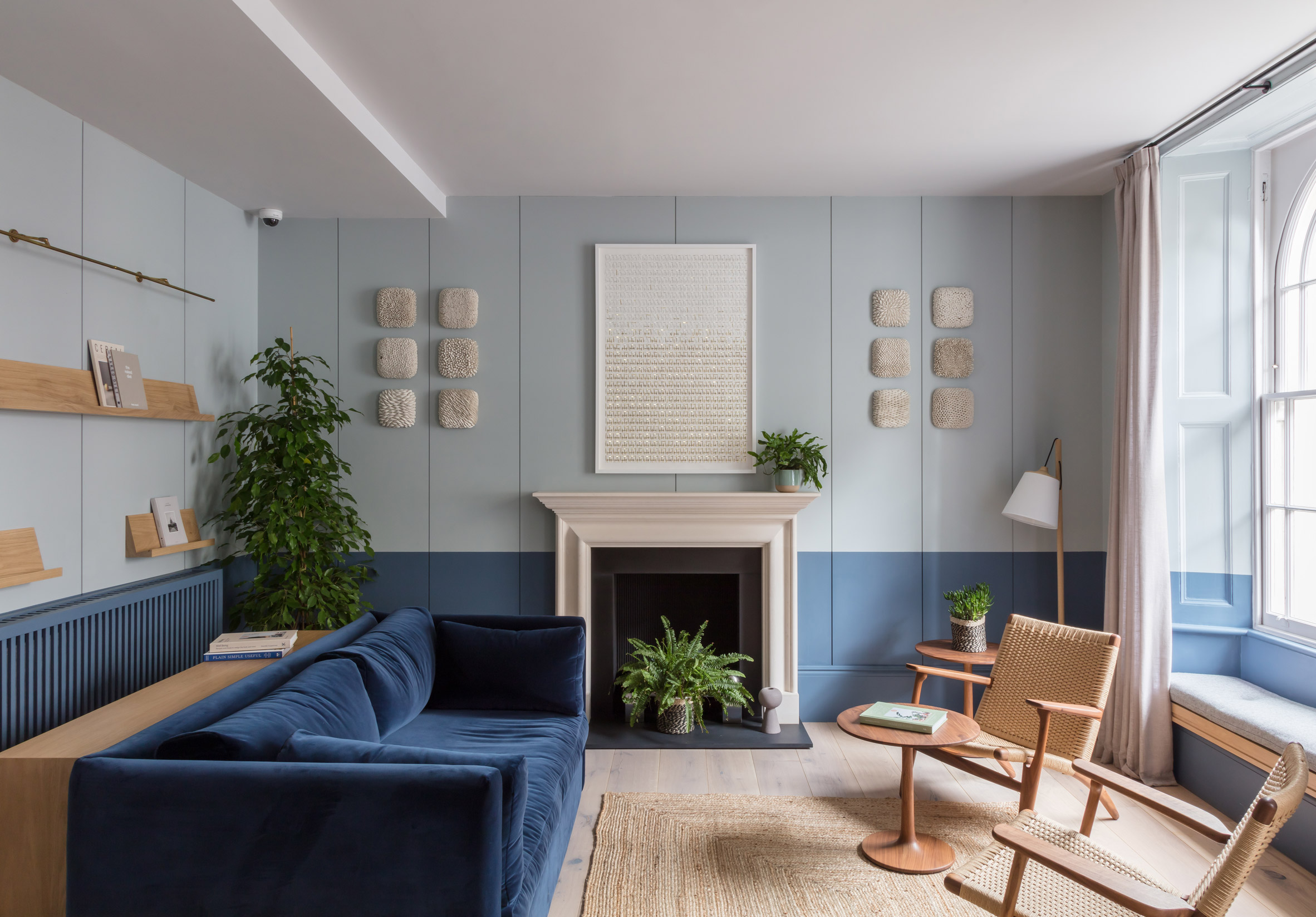 Towards the rear of this room there is also a small lounge where guests can grab snacks and relax during the day, dressed with a sea-green velvet sofa and a couple of seating poufs.

Back-of-house facilities have been placed behind doors or tucked away in the basement to not obstruct the freed-up floor plan. 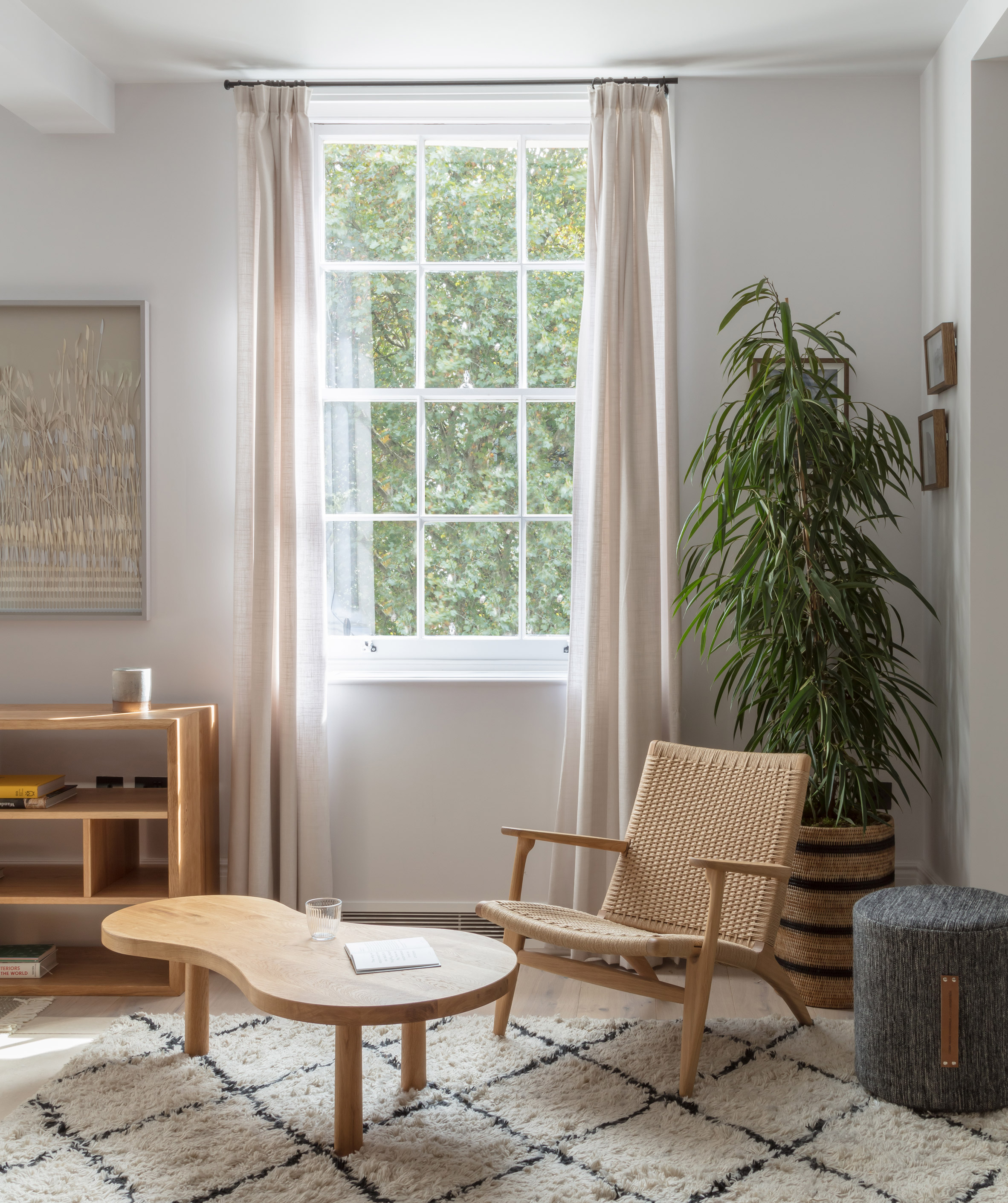 If after some privacy, guests can head to the cosy hotel library which features floor-to-ceiling blue bookshelves and woven rugs.

Heavily inspired by Scandinavian aesthetics, Holland Harvey has dotted furnishings from brands like Carl Hansen & Son and Space Copenhagen throughout the room. The practice was also influenced by the Ilse Crawford-designed Ett Hem hotel, which sits inside a century-old home in Stockholm.

“With just 12 rooms, Ett Hem is a much more intimate affair – so we were interested in how we could translate the same concept to a much larger site,” added the practice.

Keen to promote wellness and healthy living, the hotel also includes a gym, meditation station and a yoga studio that’s set within an airy, light-filled atrium. 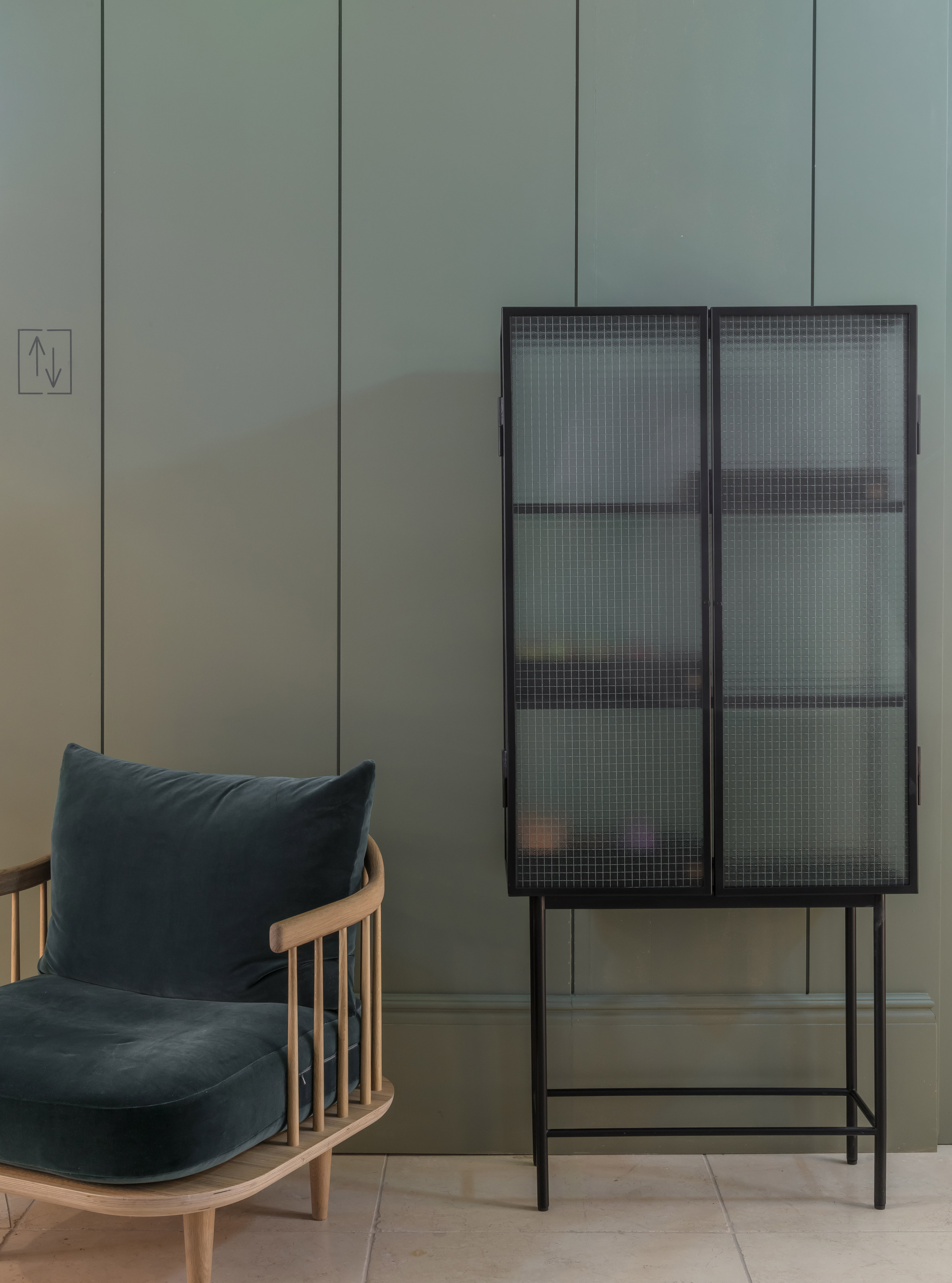 Holland Harvey was established in 2012 by architects Richard Holland and Jonathan Harvey.