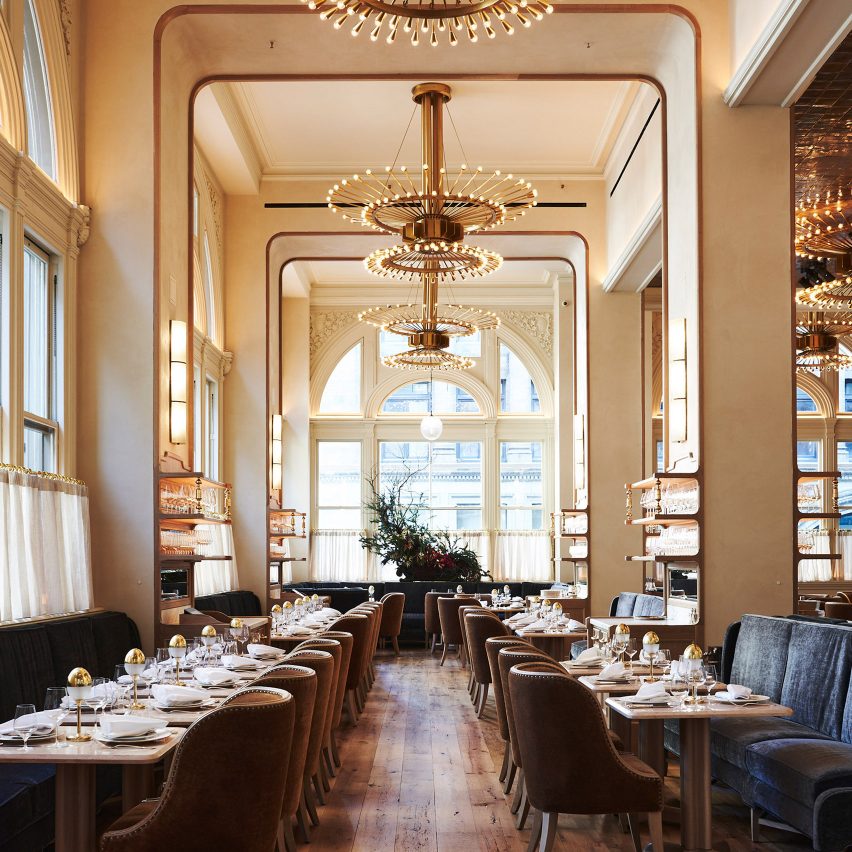 Hand-painted murals and crown-like brass chandeliers feature in the Veronika restaurant in New York, which local studio Roman and Williams designed to reference a variety of artistic styles. 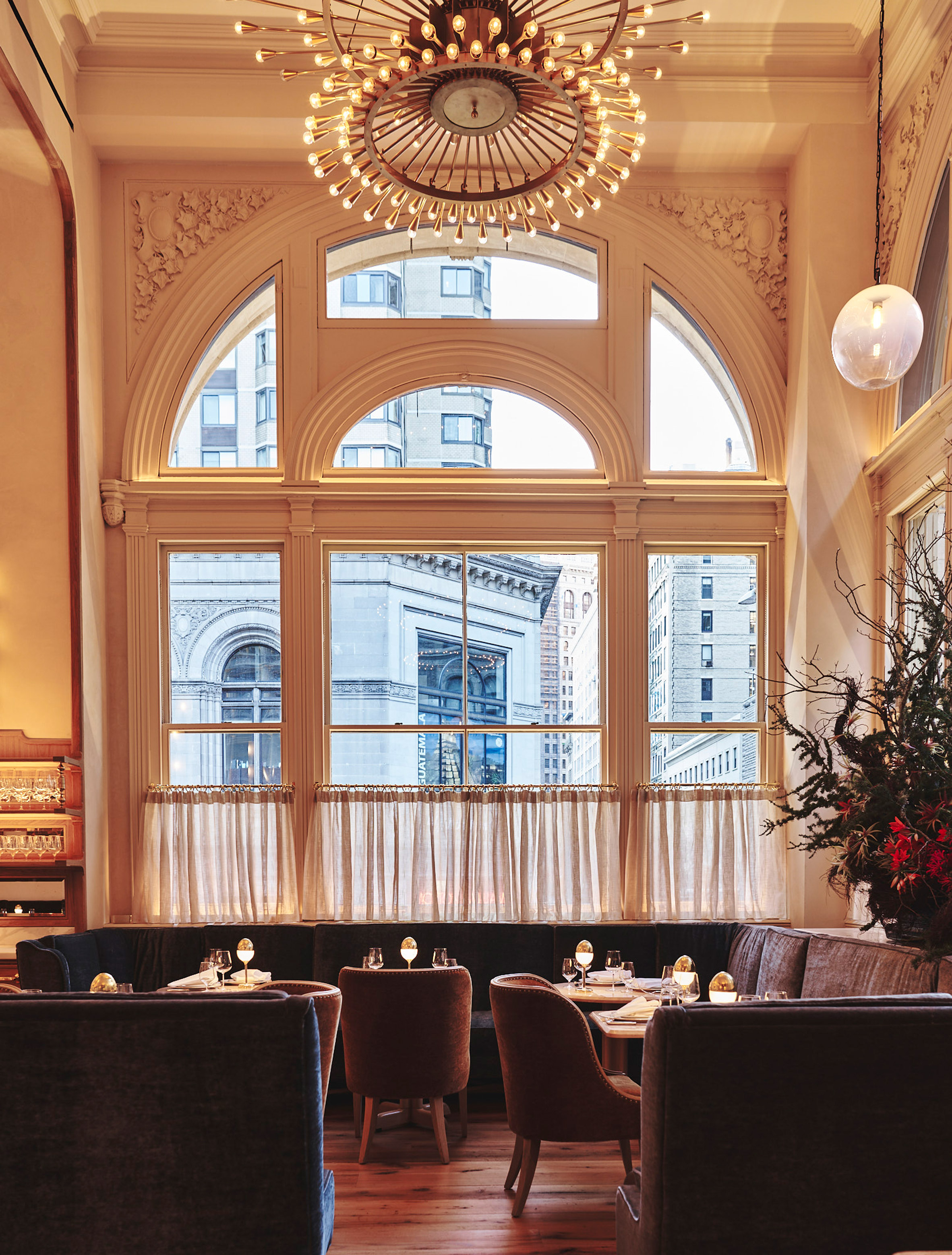 The 150-seat restaurant, named after the patron saint of photography, sits inside the New York City outpost of Swedish photography museum Fotografiska, which opened last winter.

Veronika is located on the second floor of the museum, which occupies the storied Church Missions House, a Renaissance revival Gramercy landmark built-in 1894, that was overhauled by architecture firm CetraRuddy. 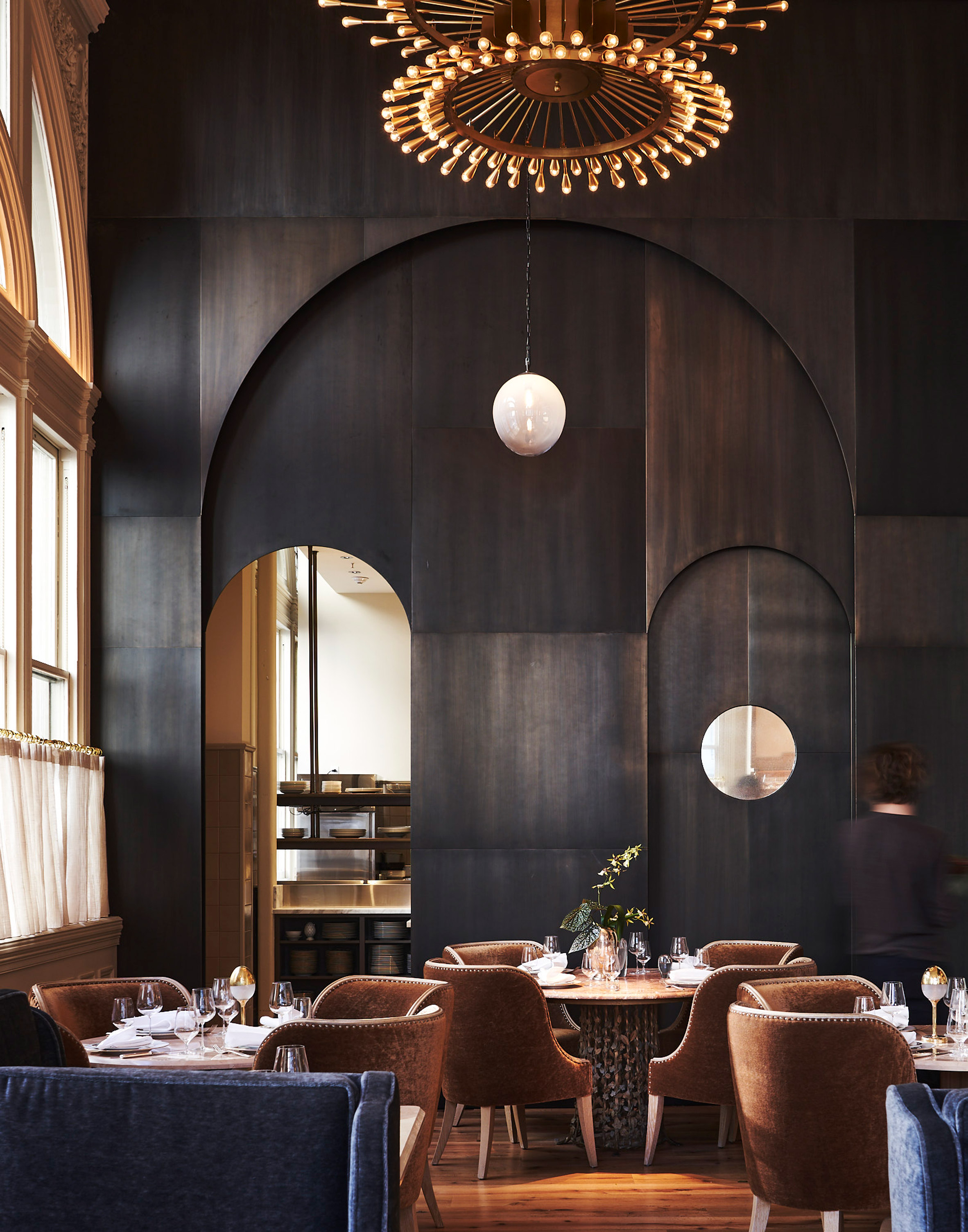 The project was led by husband-and-wife pair Stephen Alesch and Robin Standefer, whose portfolio includes popular downtown Manhattan eateries La Mercerie and Le Coucou, which were also designed by Roman and Williams.

Helmed by restaurateur Stephen Starr, Veronika serves a menu that features elevated versions of classical Eastern European and French fare, an ode to the all-day cafes of Vienna, St Petersburg and Budapest.

An ethereal mural of a forest landscape by local painter Dean Barger appears upon entry into the bar area. A series of contrasting elements, including an interplay of earthy and cyan tones, is intended to be reminiscent of the early, lesser-known works of Piet Mondrian. 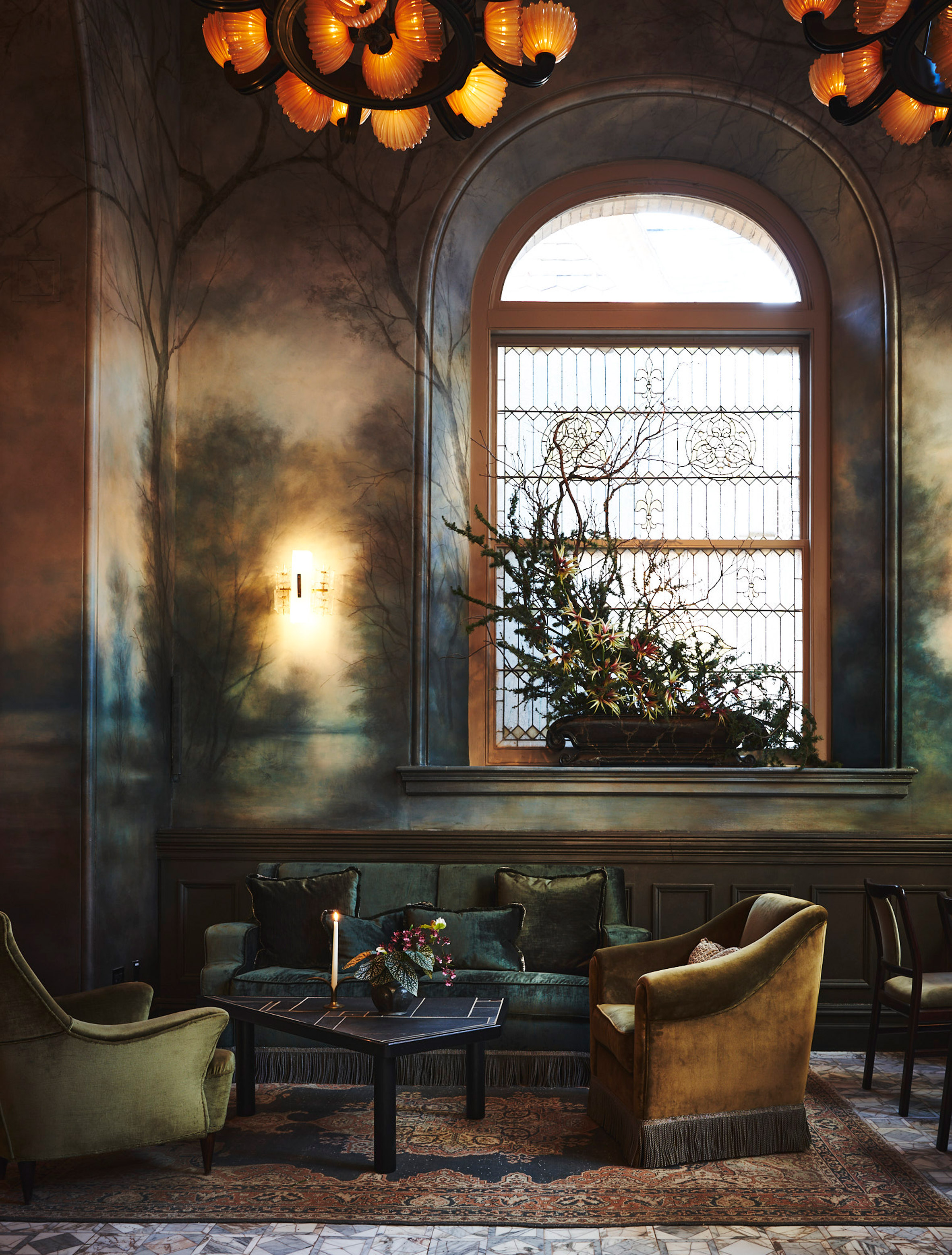 “The concept communicates the historically tense relationship between painting and photography and how each shaped each other significantly and continues to,” Alesch and Standefer told Dezeen. “As forms of expression, they are inextricably linked.”

“The mural specifically focuses on when photography was first introduced in 1839 and studies painting during the birth of photography, the compositions and frames of reference,” they added.

A rescued stained glass window serves as the backdrop to seven tiers of apothecary bottle shelves and a bar made of honed black St Laurent marble. Ornamental plaster around the window was also restored.

“The objects in the space heighten the tension between the two with a hybrid of feminine and masculine tones, forms and textures,” said the duo.

“We focused on these geometries and forms and how they evolved from the 19th- to the mid-20th-century and gave voltage to a journey of the unexpected.” 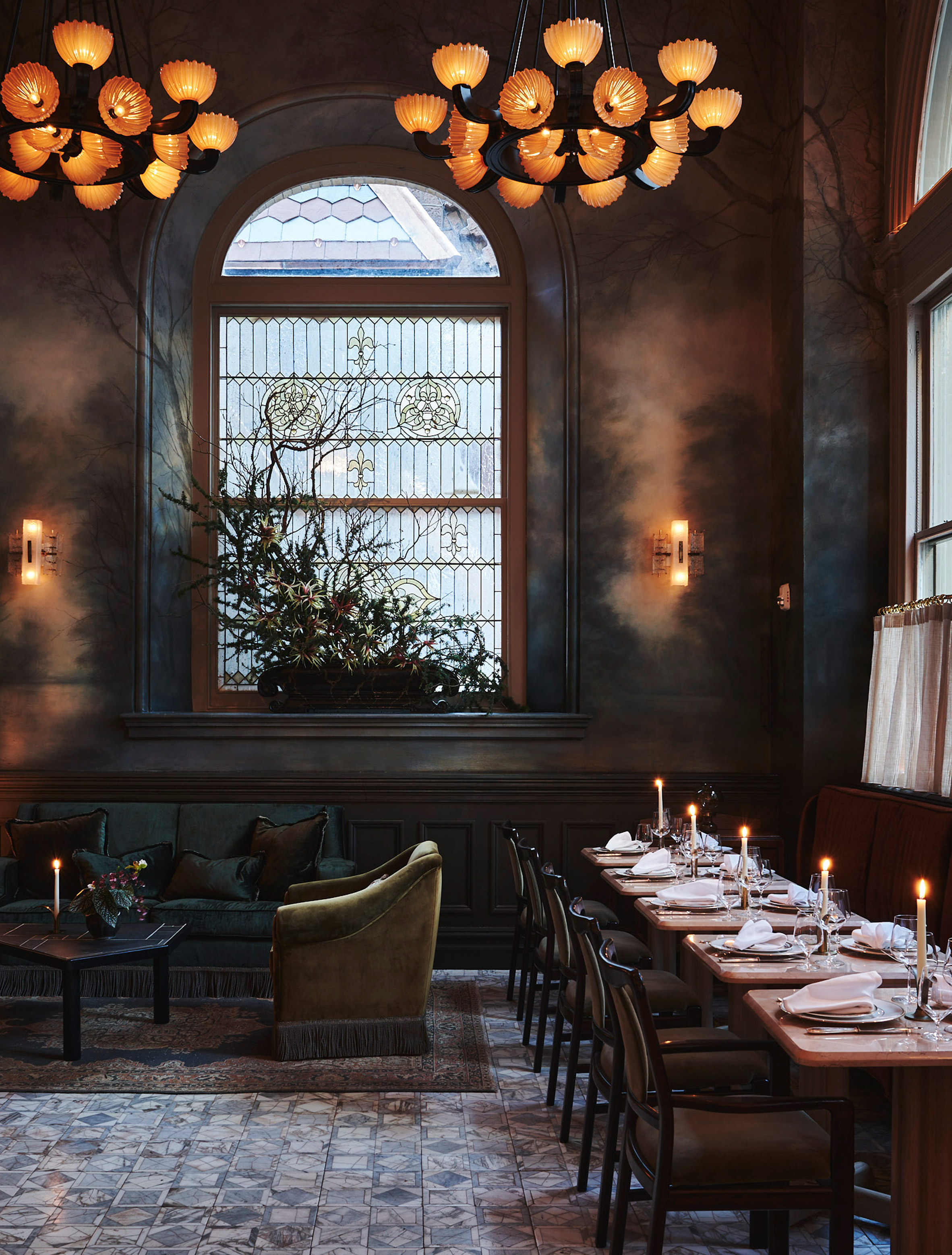 Inside, guests are greeted with the “residential meets palatial refinement” of a lofty enfilade subtly partitioned by flattened wood-trimmed archways. The suite of dining rooms is haloed by custom-made brass chandeliers with tiny points of light, designed by Roman and Williams to emulate jewels on an aristocratic crown. 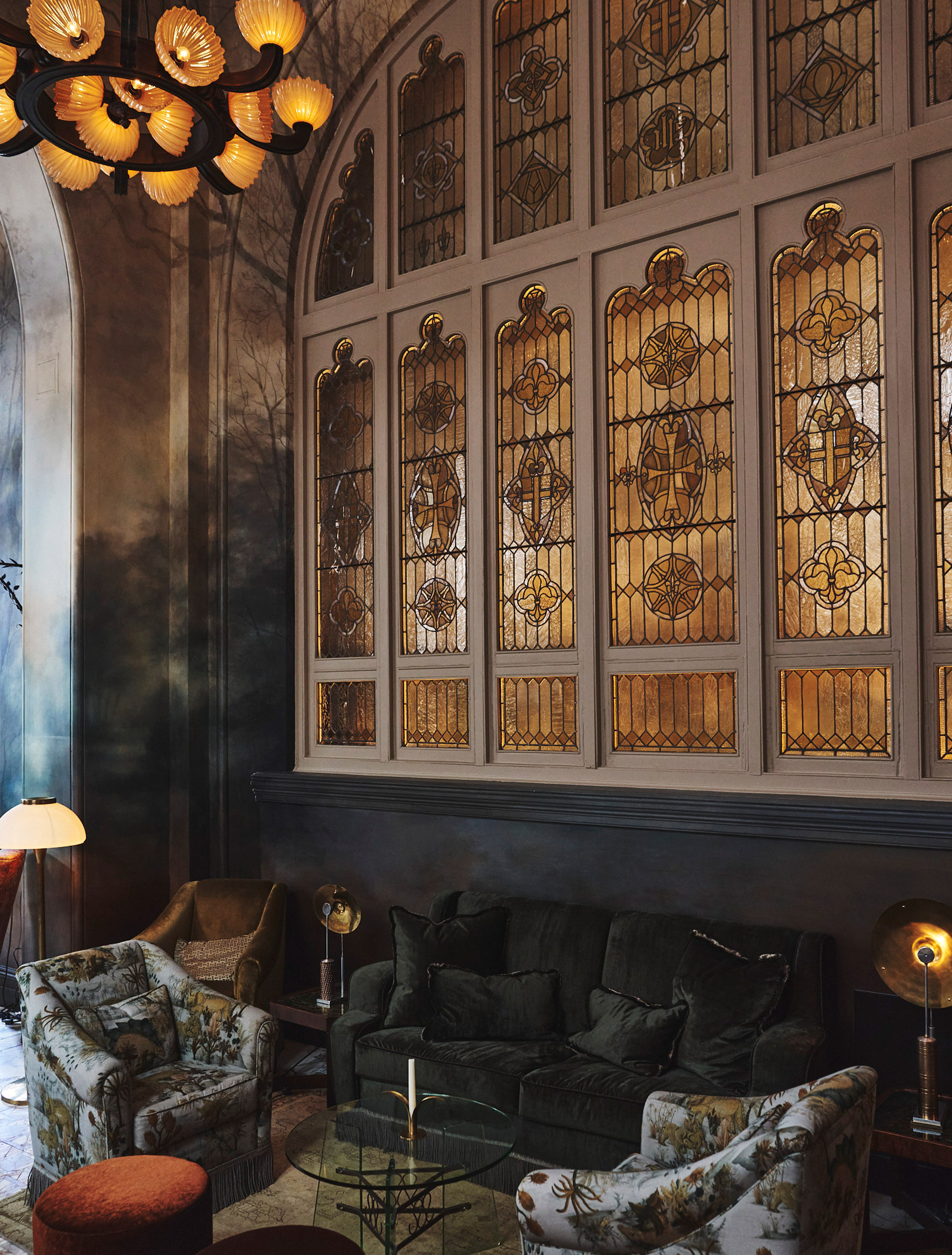 “The space is so romantic and we wanted to play against that by adding some objects and architecture from later in the 20th century,” Alesch and Standefer said.

“One of the cornerstones of Veronika is not being able to put your finger on any particular time period,” they added. “From the drama of the stained glass windows to the modern touches we echo the contrast and innovation of the relationship between photography and painting.” 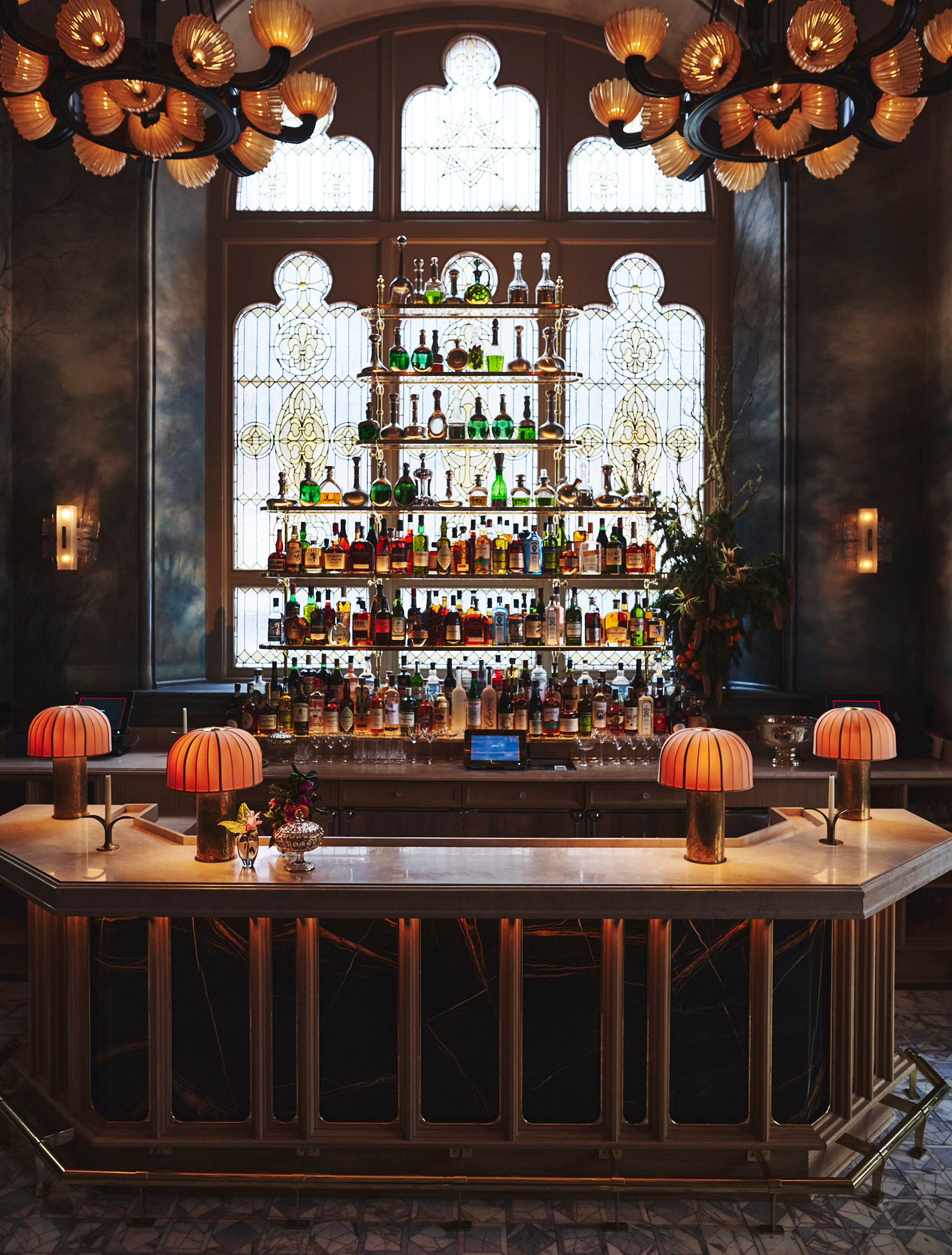 Roman and Williams was founded by Robin Standefer and Stephen Alesch in 2002.

The New York design studio recently installed a cabinet of curiosities inside its flagship store on 53 Howard St in Soho, which includes its furniture and homeware showroom, and La Mercerie Café.

Photography is by Adrian Gaut.