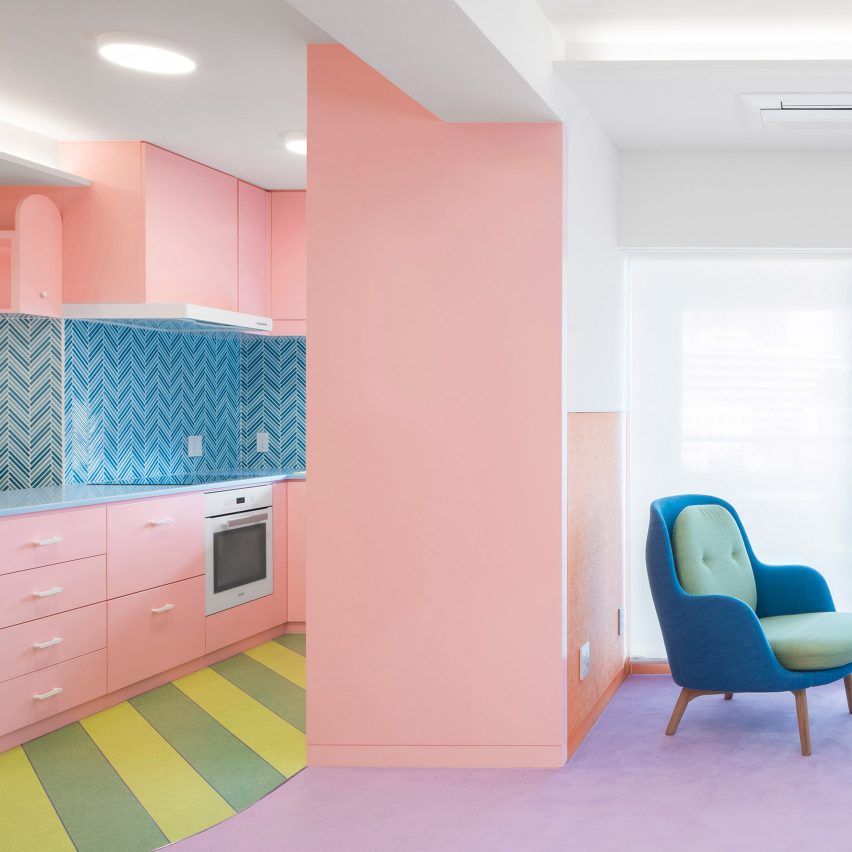 A bubblegum-pink kitchen and a stripey watermelon-green floor are some of the features inside this Tokyo apartment, which designer Adam Nathaniel Furman has completed in a sugar-sweet colour palette.

Described by Adam Nathaniel Furman as a formerly “claustrophobic” space, the Nagatachō Apartment had previously contained several cramped rooms that were arranged around a long, narrow corridor. 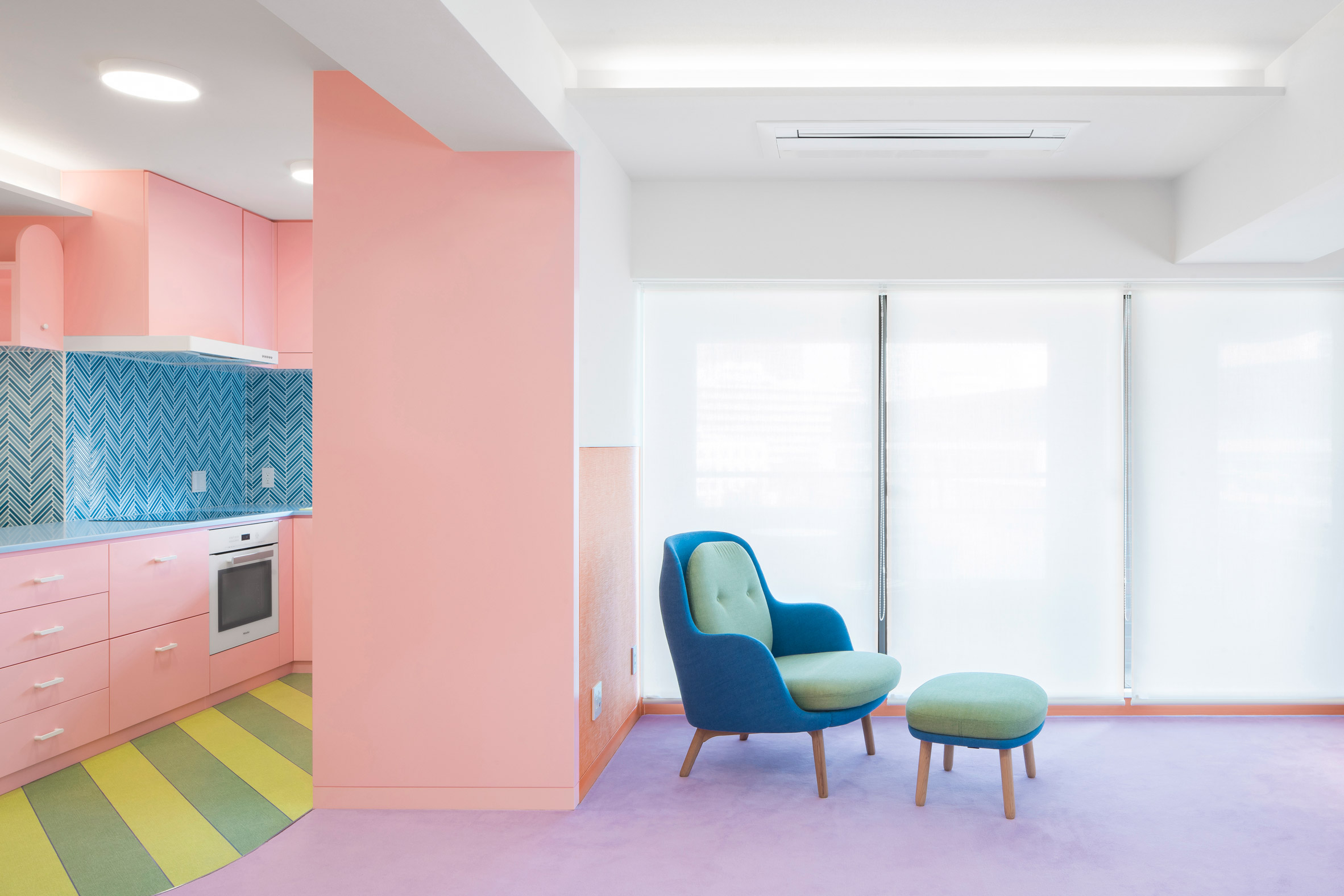 The ceilings were also “touchably low” and tiny, deep-set windows meant that little natural light was reaching the living spaces.

It’s owners – a retired expat couple – therefore tasked Furman with redesigning the home to be “a place of happiness, joy and lightness”. 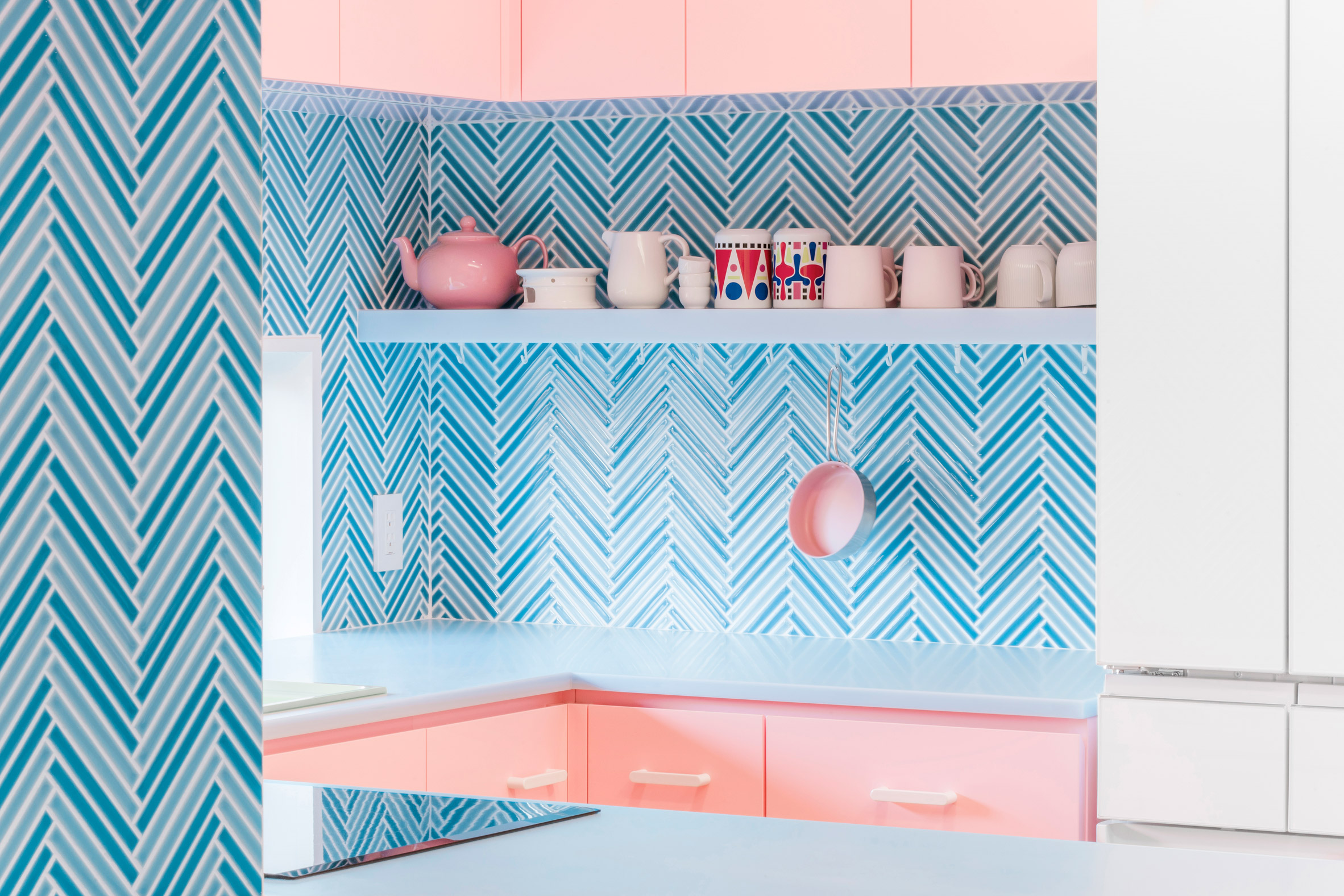 “As I have quite a colourful portfolio of work, I’m very lucky to generally attract clients who are super passionate about experimenting with design and colour, and this project was no exception,” the London-based designer told Dezeen.

“My initial proposal was more conservative (aesthetically speaking), and I was pushed to do more of a ‘total’ design, in which a full – but gentle – atmosphere was created at every level of the flat.” 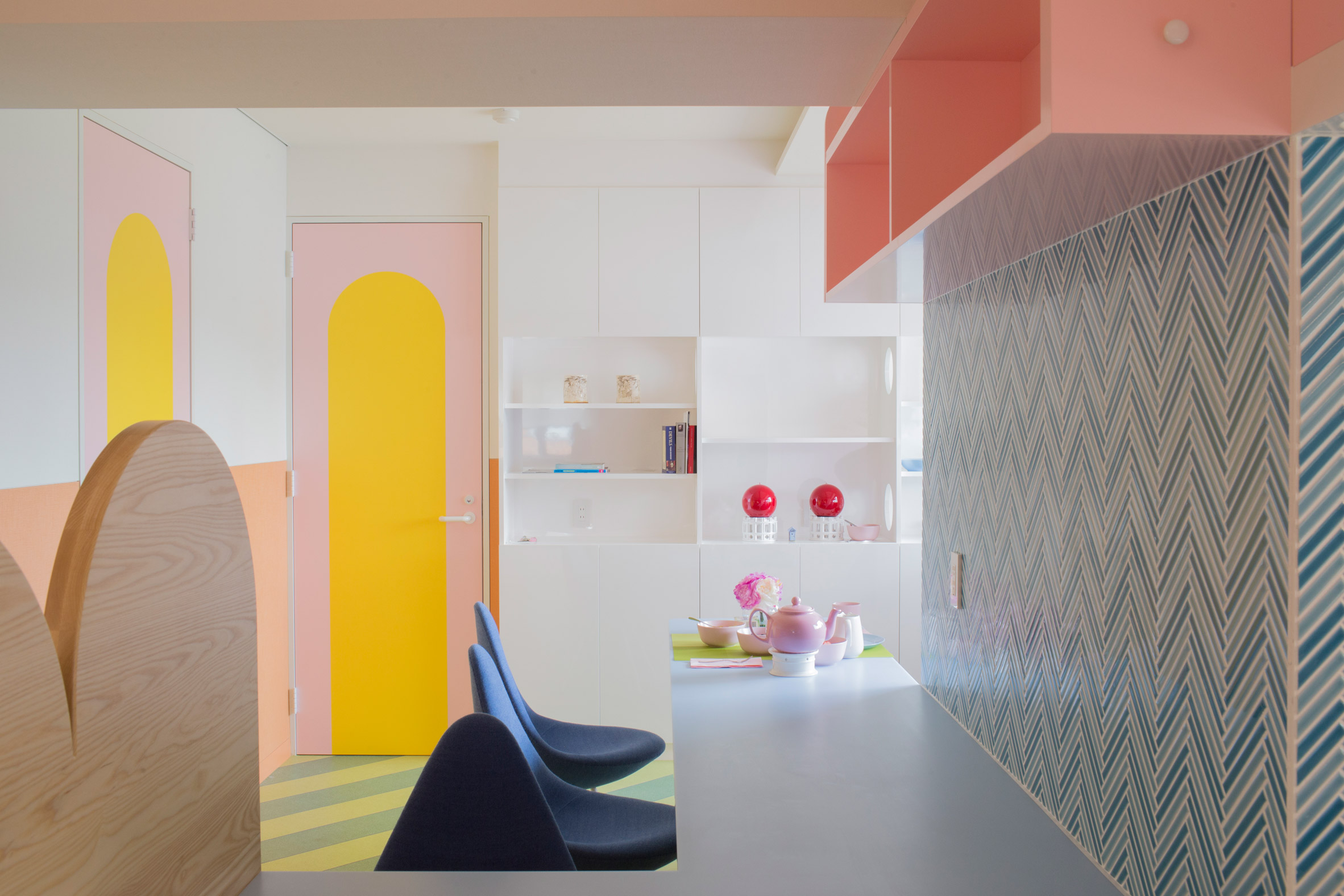 Furman first went about reconfiguring the 160-square-metre apartment to form larger and more open rooms. At the heart of the plan is now a candy-pink kitchen suite, an element that encouraged the designer and clients to nickname the home “bubblegum flat”.

Slim, blue tiles have been arranged to create a herringbone-pattern splashback, while stripes of “watermelon-green” vinyl feature on the floor. 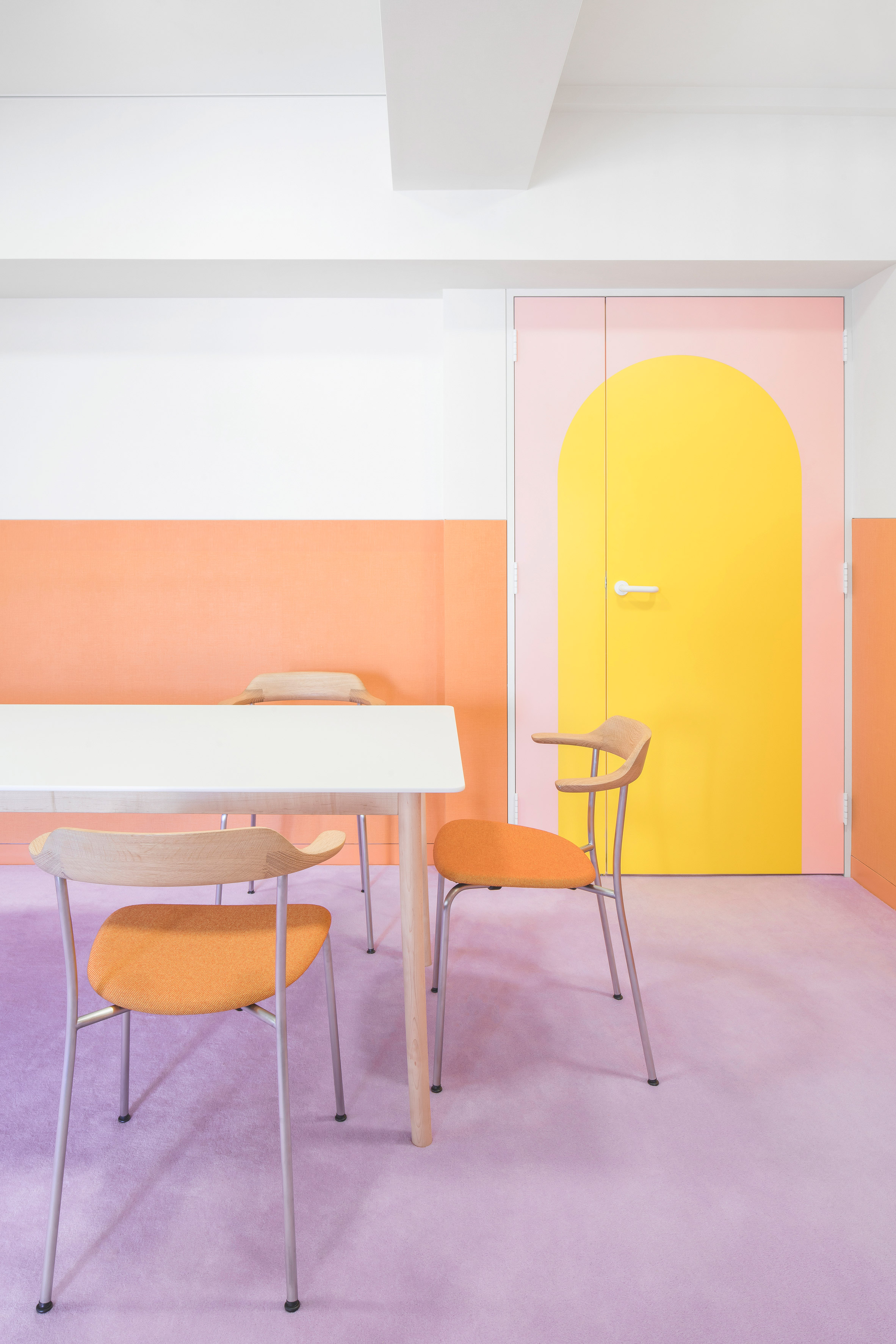 The kitchen connects to a small breakfast nook, and a dining room that’s been finished with lilac carpet which “has the feel of sponge cake and looks like icing”.

“A lot of the way I described the project as I was developing it was through taste and references to cooking and food, so that the colour scheme became a matter of choosing ingredients for a beautifully calibrated visual feast,” he explained. 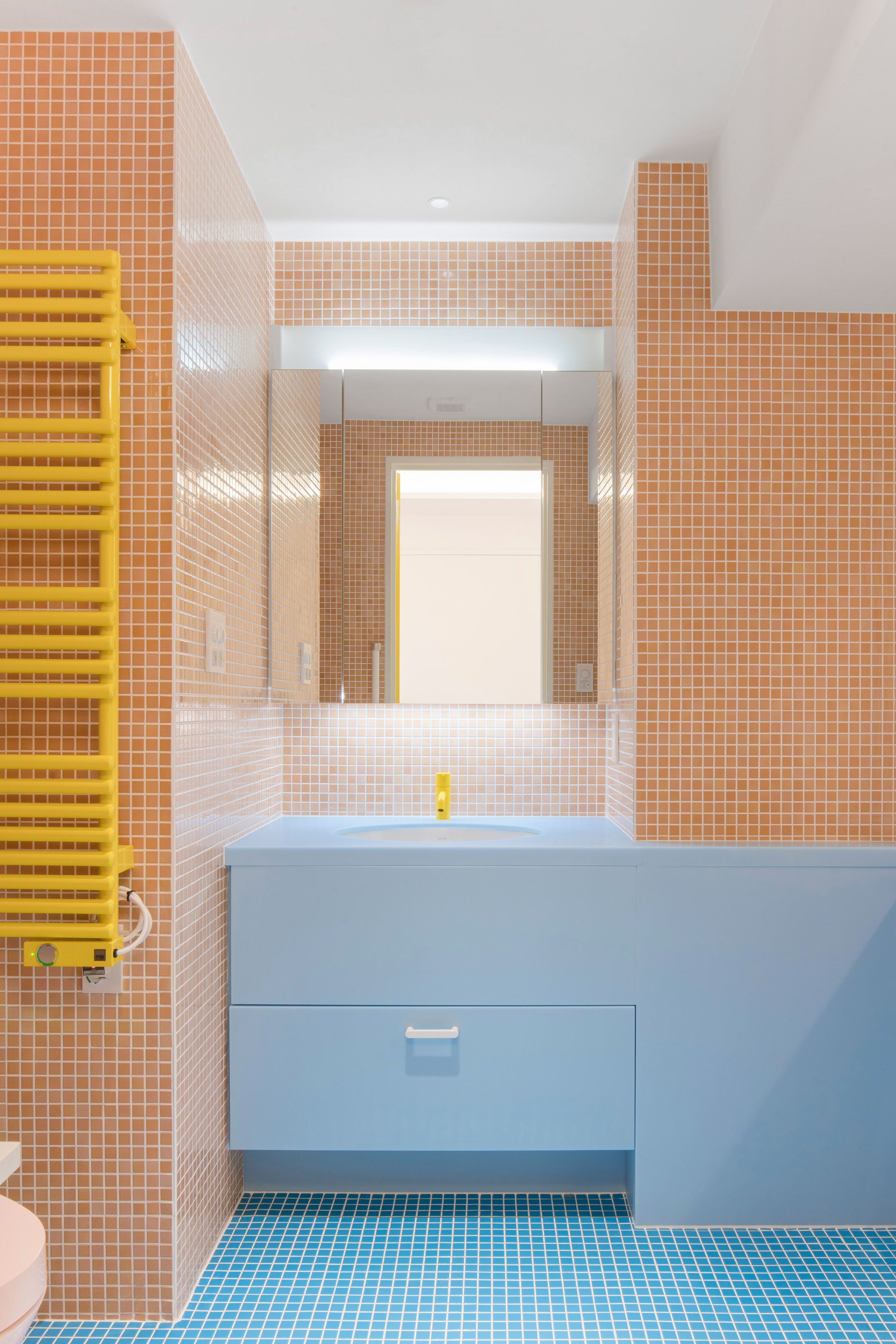 Vivid colours have been applied throughout the rest of the apartment, particularly in the bathrooms where purple, blue and milky-orange tiles clad the walls.

Fixtures like tap faucets and towel rails have been completed in a “zesty” lemon-yellow.

“I have such strong memories of the mosaics in some [Japanese] bathrooms from the ’60s when I was a child, all lilacs and pale peaches and light blues, and I absolutely had to recreate my own version of that here,” said Furman, who spent some of his childhood in Japan with his maternal grandmother.

In the bedrooms, turquoise and lime-green textured wallpaper forms a border around the lower half of the walls. 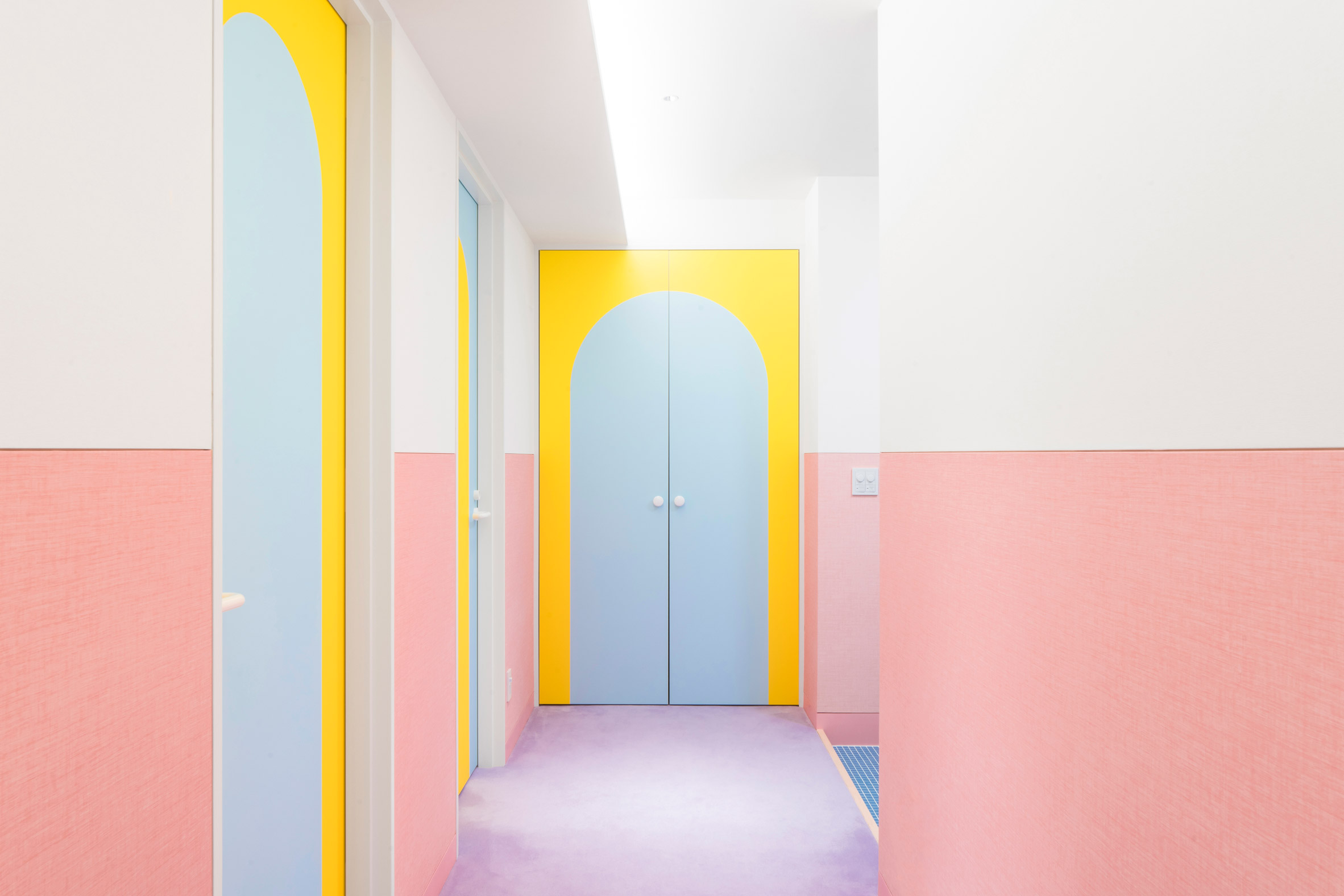 Although the apartment diverts from what could be considered a traditional Japanese aesthetic, Furman says he simply takes a “slightly different mix” of references from the country.

“I was lucky enough to experience Japan as a child, so I was exposed to a domestic, day-to-day, no doubt messier, personal, commercial (toys, tv, shops) and un-curated version of the place that I very much loved,” Furman explained.

“I also remember the rise of ‘cute’ culture and the intriguing and often uncanny takes on gender that involved, which used to transfix me, and the colours that were so intrinsic to those gender-plays,” he continued, “so [the apartment] is a mix”. 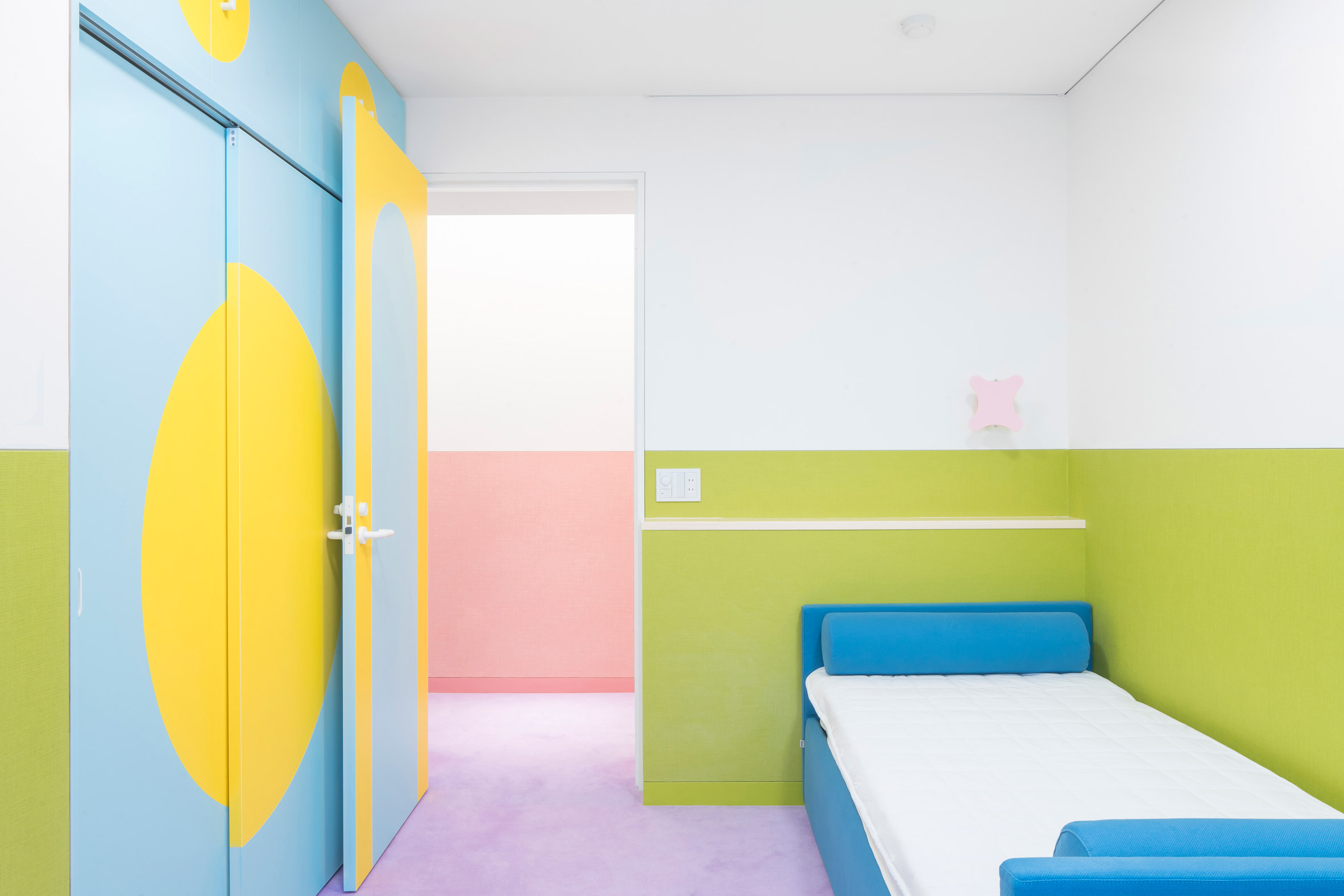 The bold colour palette of the Nagatachō Apartment extends to the rest of Adam Nathanial Furman’s projects.

Earlier this month, the designer brightened a maternity centre in London with a “flowerburst” mosaic.

Last year he also produced a pair of bold, cartoonish cabinets that are inspired by Nakano Broadway mall, a shopping centre in Tokyo famous for its extensive selection of anime items and video games.

Photography is by Jan Vranovsky unless stated otherwise.

The post Adam Nathaniel Furman’s Nagatachō Apartment is designed to be a “visual feast” appeared first on Dezeen.