Floor-to-ceiling curtains carve up the interior of this open-plan apartment in Bilbao, Spain, which has been overhauled by architecture studio Azab.

Called Ready-made Home, the project is set within a rationalist-style residential building that was built in the 1960s. 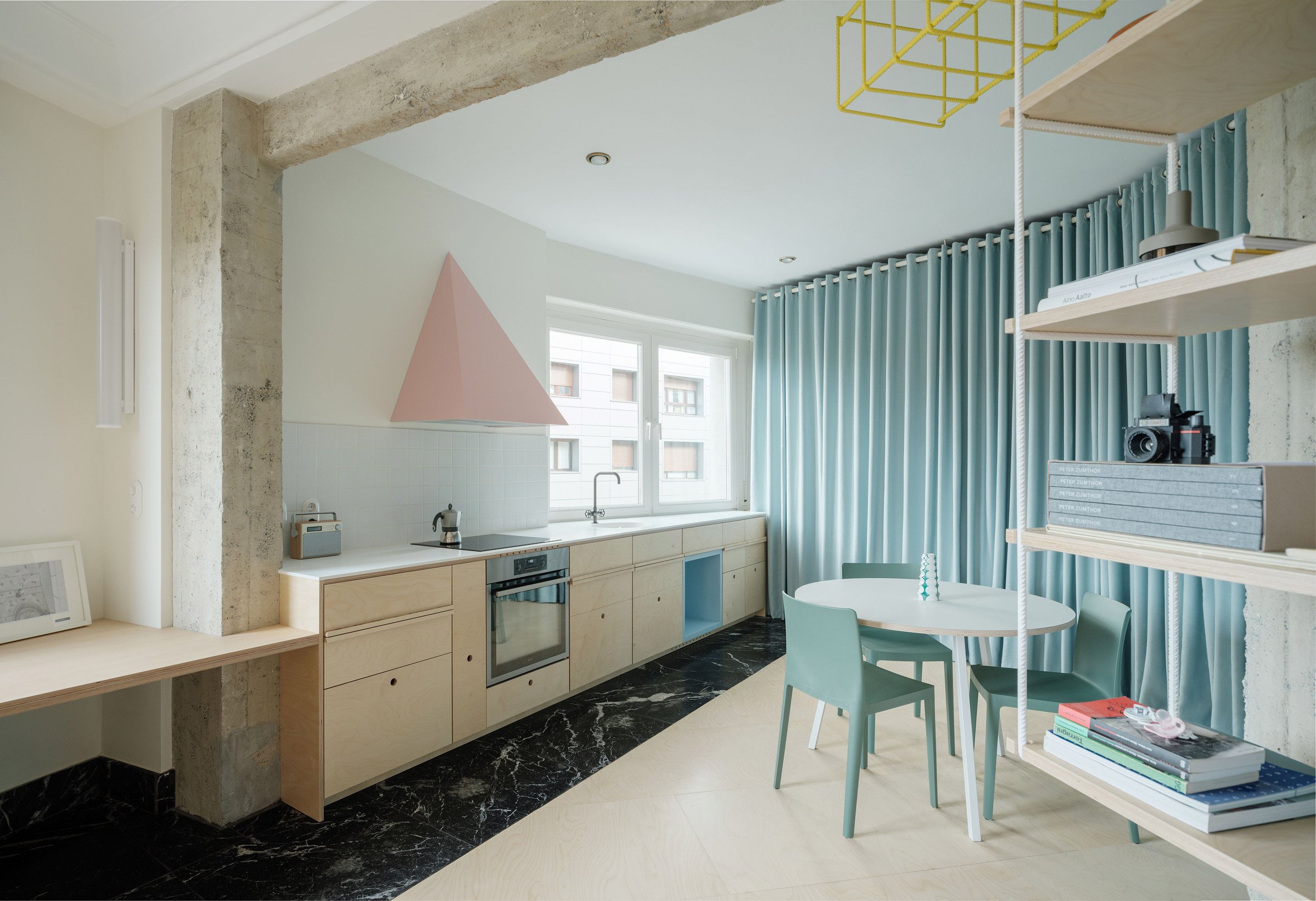 It has an unusual semi-circular floor plan that looks westwards out across a plaza, with views towards the mountains that surround Bilbao. 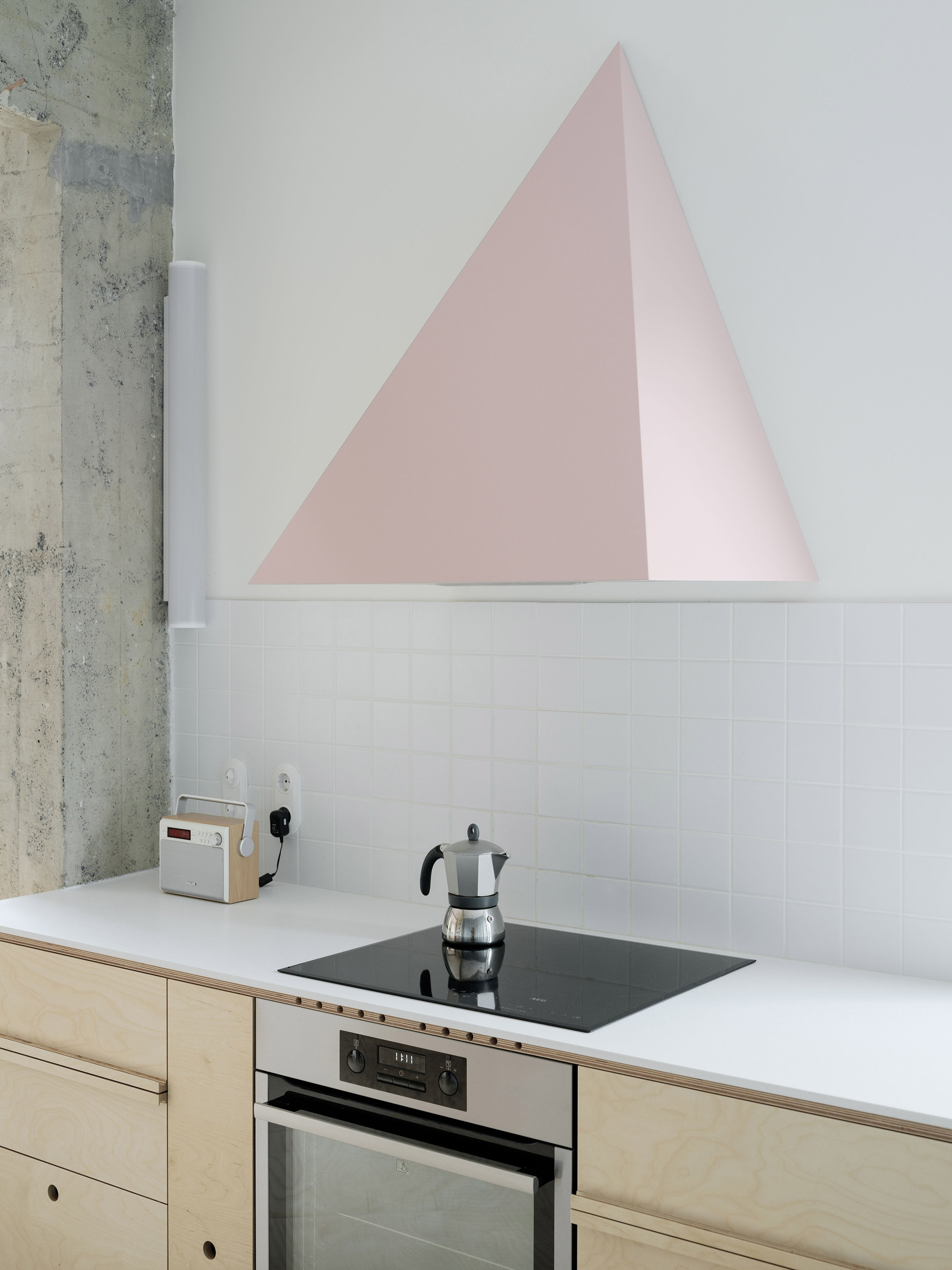 “The original configuration of the house was quite conventional and typical of a bourgeois house of the 60s, with a succession of rooms linked by a corridor,” the studio’s principal architect, Iñigo Berasategui Orrantia, told Dezeen.

“However, the uniqueness of its corner location with that beautiful semi-circular plan caused certain oddities when subjected to this functionalist orthodoxy, since the radial partitions were unable to configure orthogonal spaces,” he continued.

“What we propose here is an unprejudiced approach to the domestic issue, where space moves away from that classic idea of a succession of specialised and segregated spaces.” 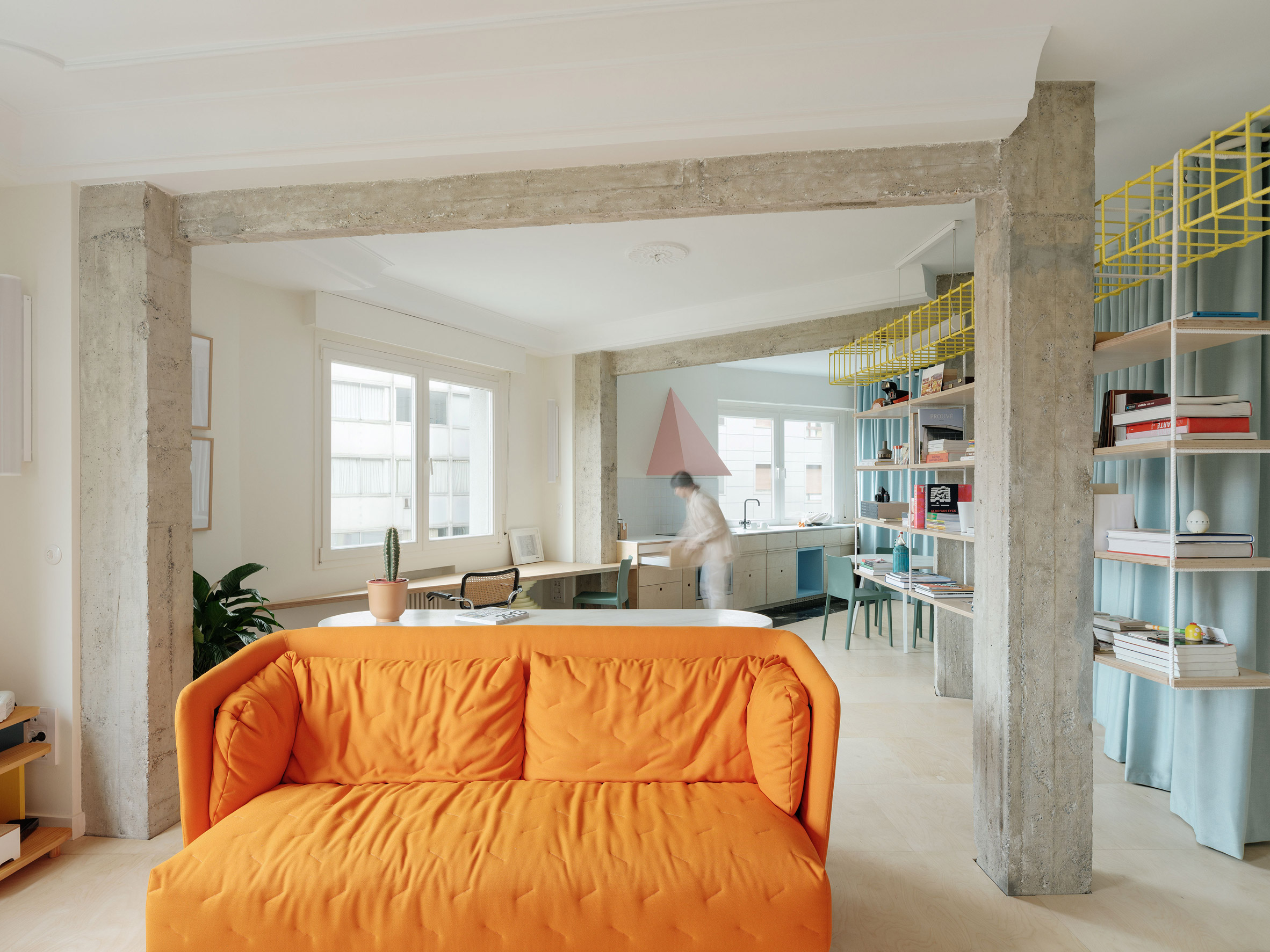 To create a flexible, open-plan layout, partition walls have been removed everywhere except for the bedrooms. The space is instead loosely divided by a network of pale-blue curtains and furnishings.

“The curtains have theatrical and playful connotations and invites the inhabitant to perform with it, to change the space and to play with the mysteries, contradictions and paradoxes that privacy offers us beyond morality,” said the studio.

The living, dining and kitchen areas are spread across the front of the apartment with views out across the plaza, while the bathroom and storage spaces are concealed at the back behind blue curtains on either side of the entrance. 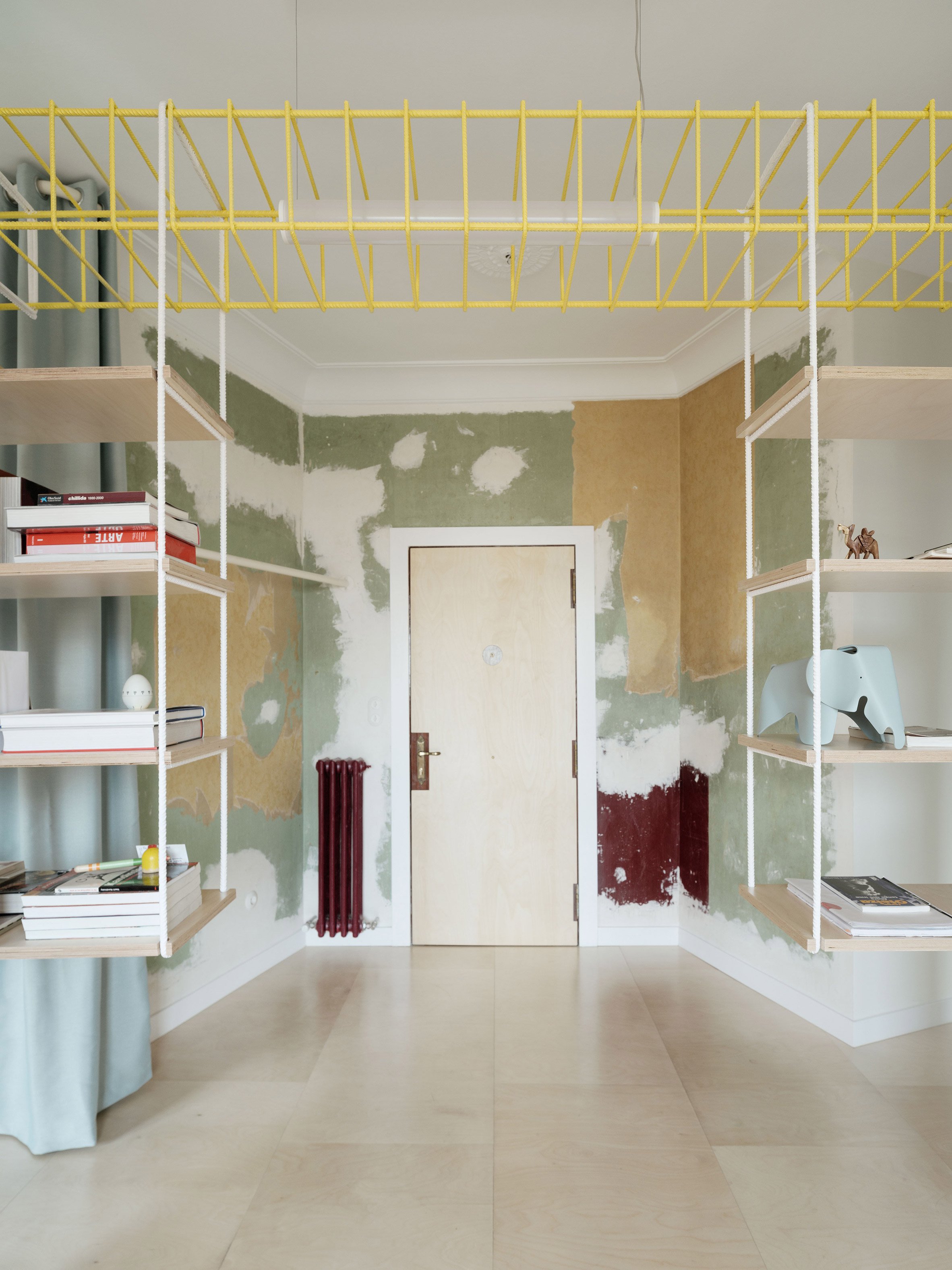 A wall that frames the entrance has been left unpainted with layers of exposed paint, plaster and filler on display.

“The unpainted wall was the only interior partition that had a central weight in the space, and thanks to that succession of layers of paper and colours, it worked well as a transition between the two large curtains that cover the rest of the dividing walls,” explained the studio.

“In addition, it seemed to us that it contributed a poetic approach by making visible the marks of the different inhabitants of the house.” 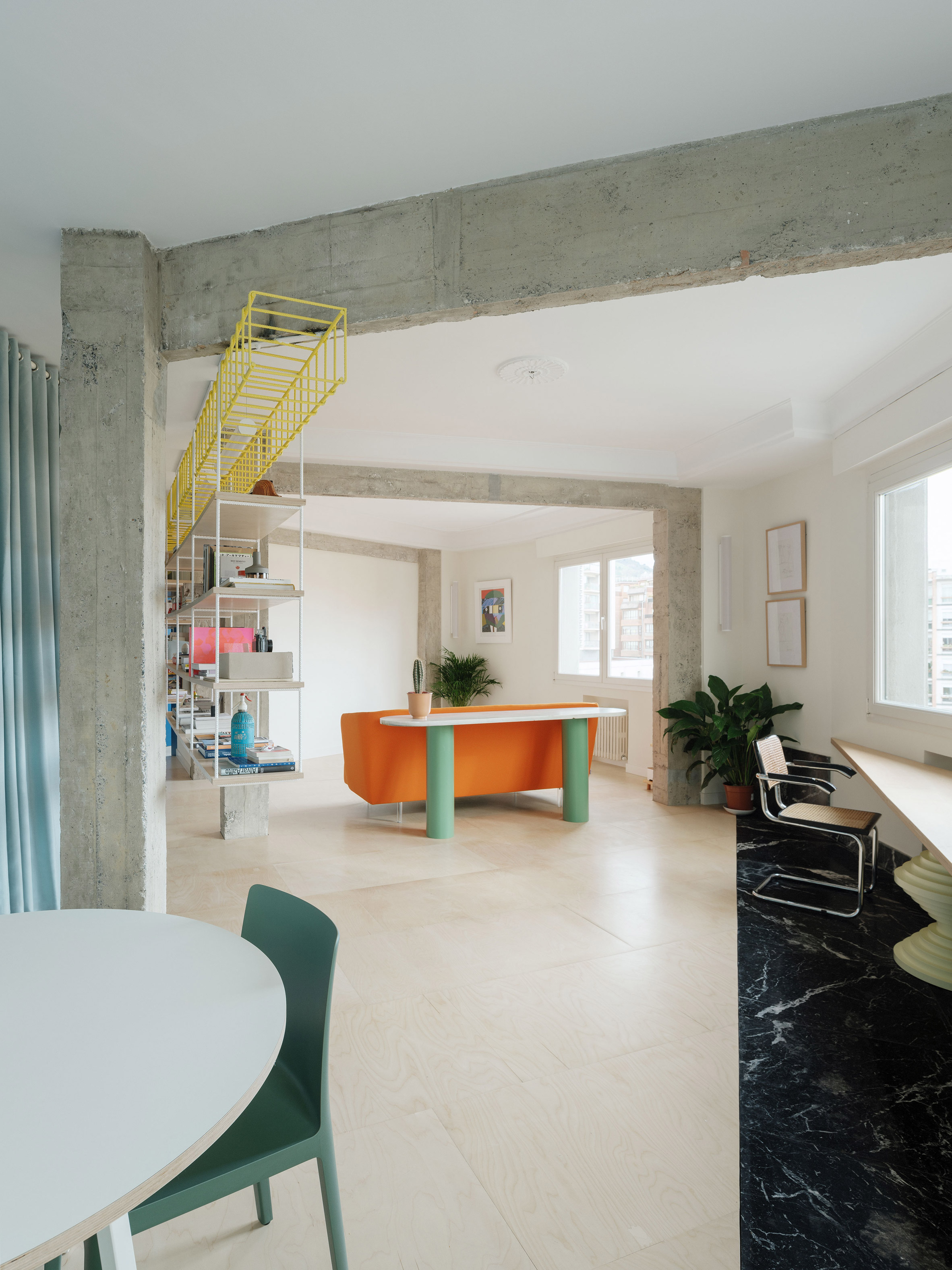 The few partition walls left in the apartment help close-off the sleeping quarters from the rest of the floor plan. 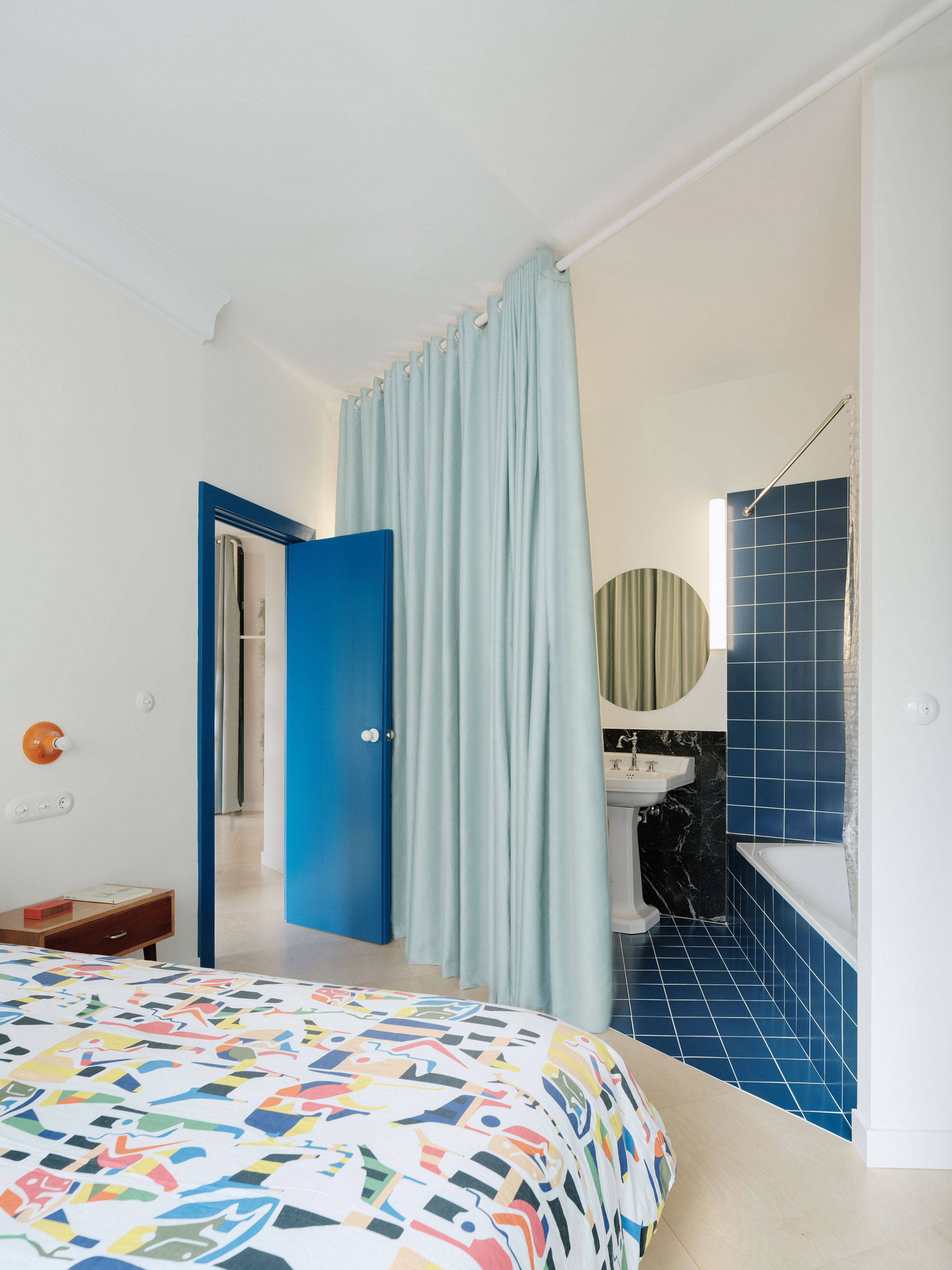 A gridded yellow framework made from lacquered steel snakes across the ceiling between four existing concrete pillars.

Instead of being hidden away, the frame has been turned into a decor feature for the home – tube lighting has been placed inside and two shelving units hang from it.

Colour has been used to highlight other elements within the space, such as the baby-pink extraction hood above the cooking stove, the table in the living area two tubular, green legs and the two bright-blue bedroom doors.

“The use of colour is fundamental in the project, the palette of fresh colours qualify the objects and sweeten them,” added the studio. 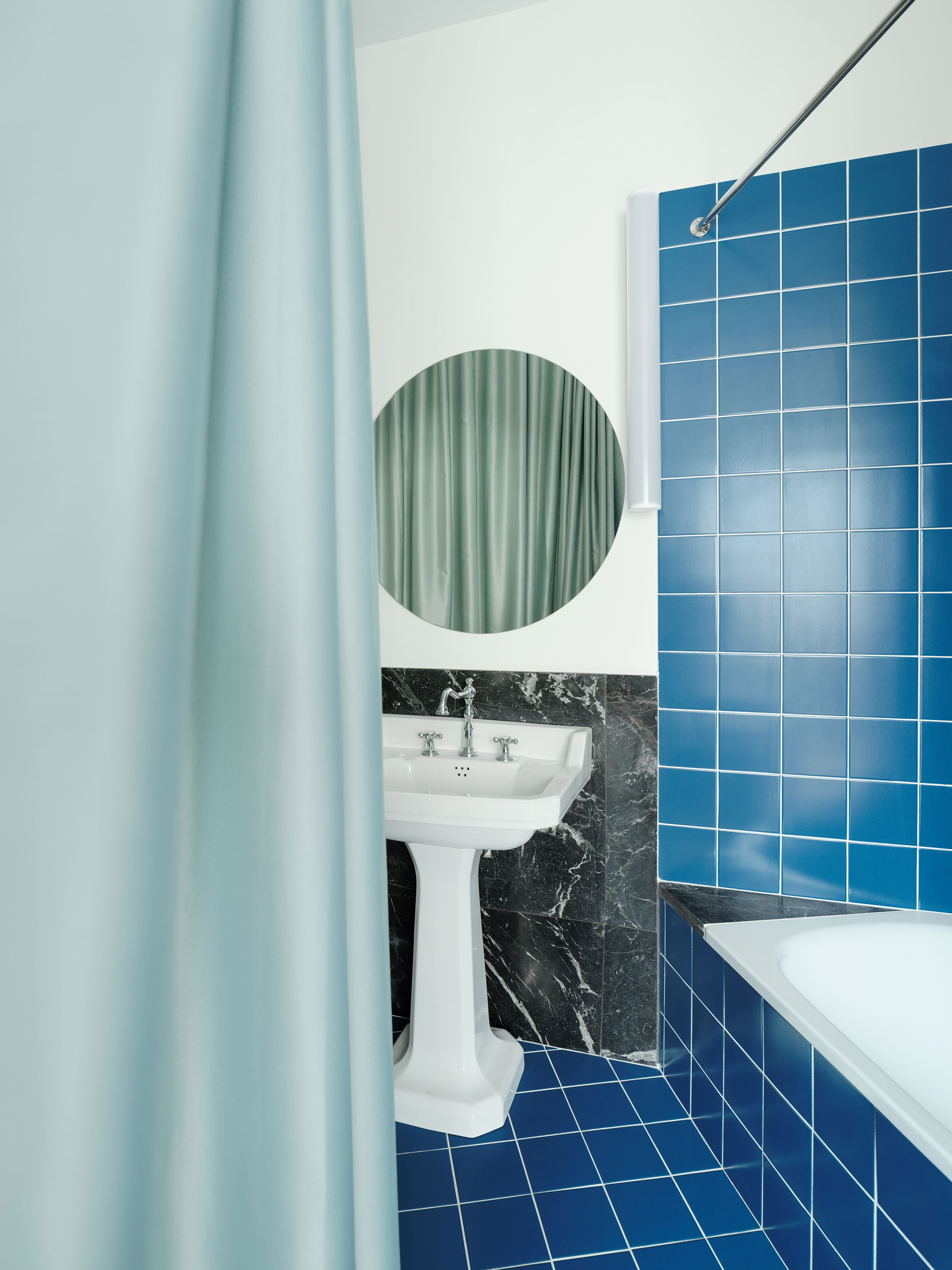 There are also a couple of recycled elements in the apartment – for example, a black Marquina marble tabletop has been repurposed as flooring in the kitchen.

This contrasts against the birch-plywood boards run throughout the rest of the space.

Ready-made Home joins a number of quirky residential projects that Azab has completed in Bilbao – others include the 100.60 Apartment, which features sunny yellow surfaces and under-floor storage, and the Mixtape Apartment, which contains a bright-pink kitchen.

Photography is by Luis Díaz Díaz.