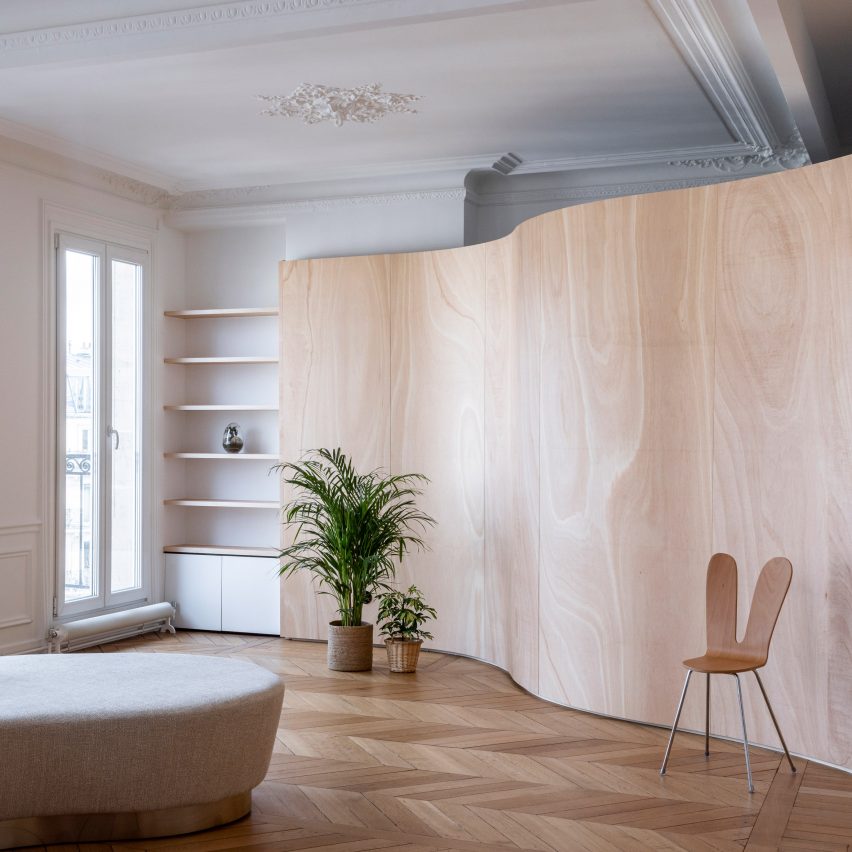 A sinuous plywood wall winds through the interior of this Parisian apartment, which has been redesigned by local studio Toledano + Architects.

Wood Ribbon apartment is set within a residential building that was constructed during Paris’ Haussmann era, which saw the redesign of large parts of the city’s urban landscape between 1853-1870.

The apartment has been left largely untouched since the end of the 19th century and still boasts a handful of original features, such as parquet wooden floors and ornate ceiling plasterwork. 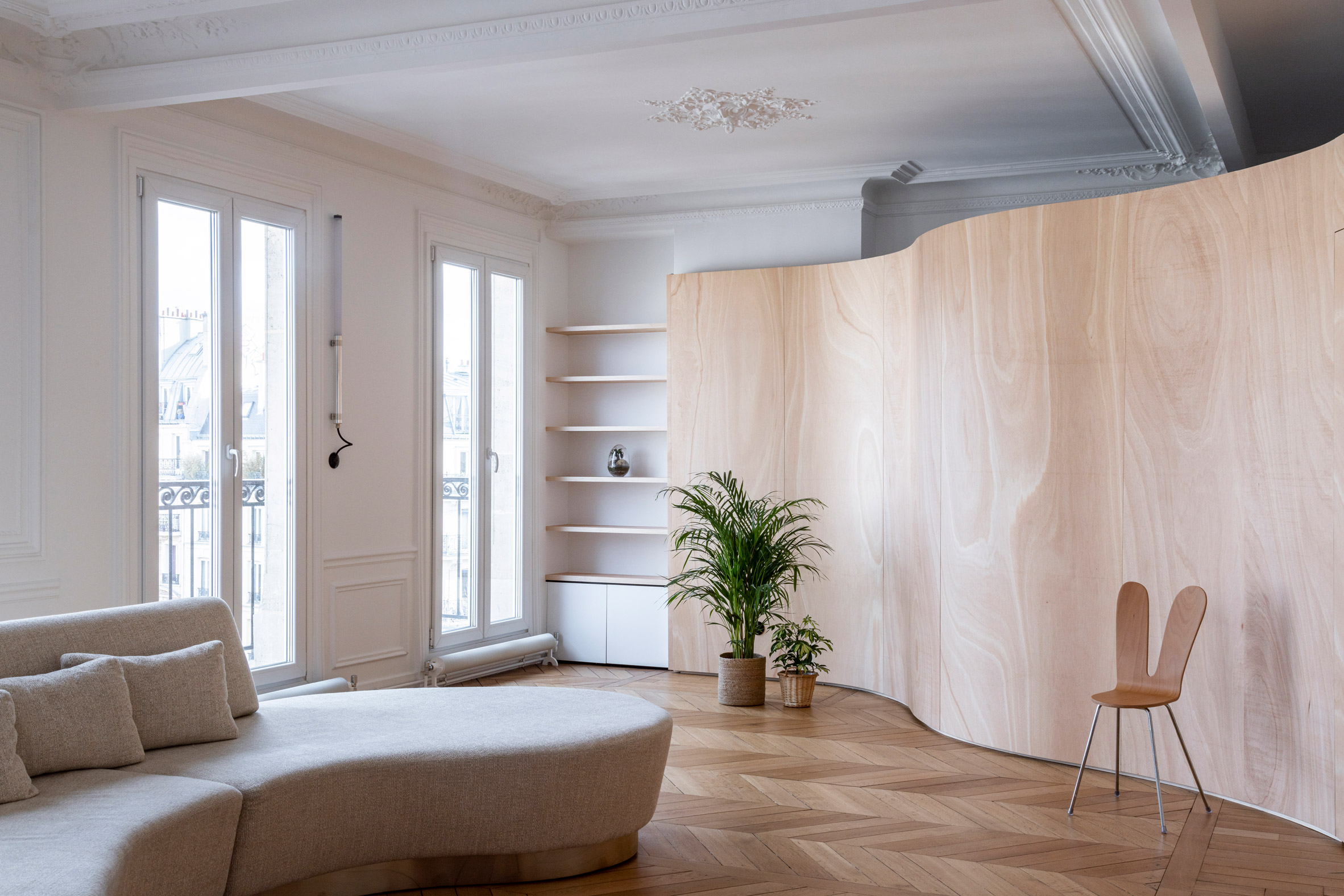 However, its current owners – a young couple with a baby – were unhappy with the convoluted floor plan and awkwardly-sized rooms.

Locally-based studio Toledano + Architects was brought on board to “unveil a new appreciation of space” within the home, whilst maintaining the historical character of the building. 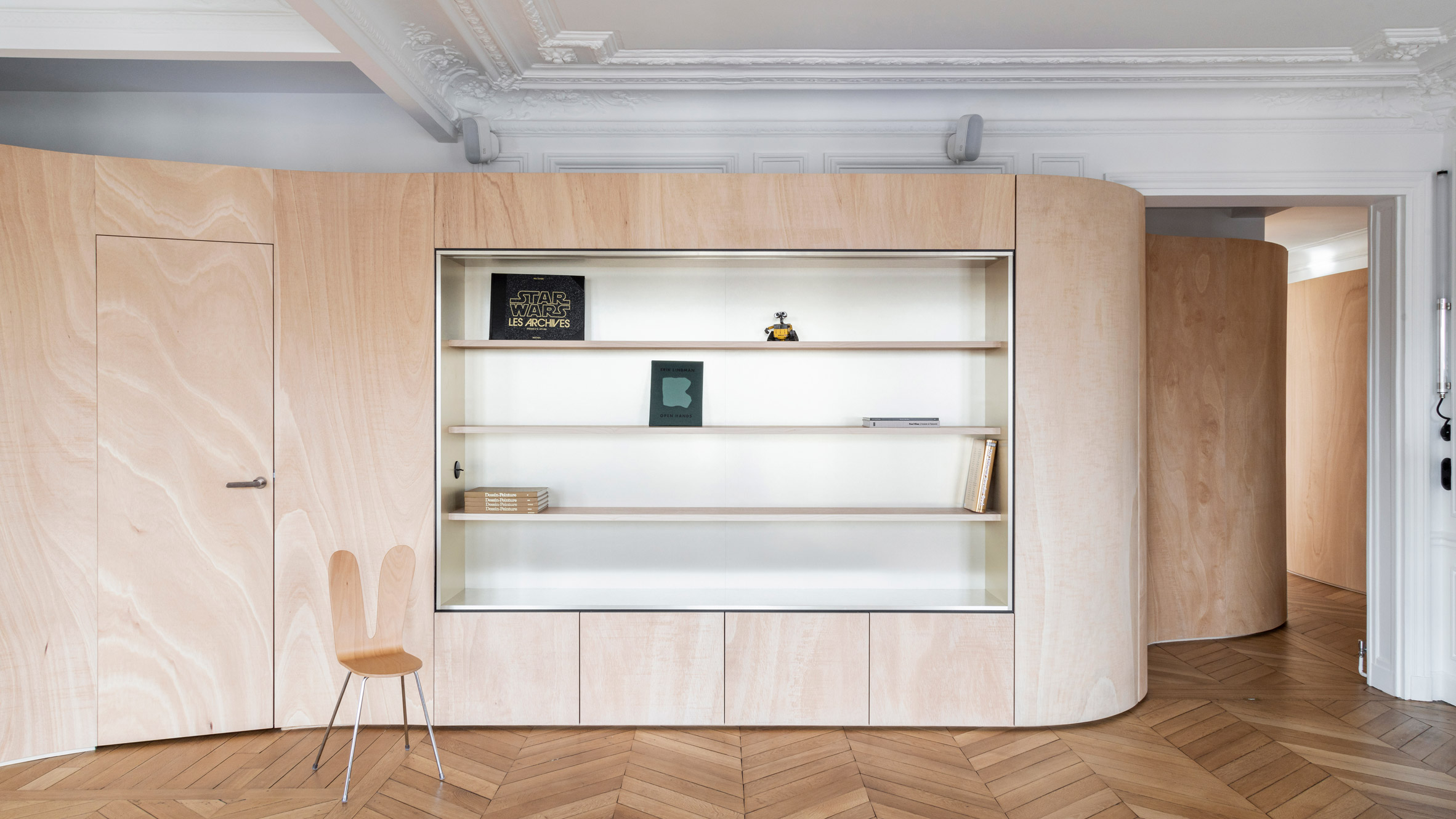 “I analysed the existing space and realised that some strong elements were really beautiful and had no reason to be destroyed,” the studio’s founder, Gabrielle Toledano, told Dezeen.

“At the same time, I didn’t want to compromise and get stuck in the former layout,” she continued.

“The plan became quite obvious once I released myself from the constraints imposed by the original walls.” 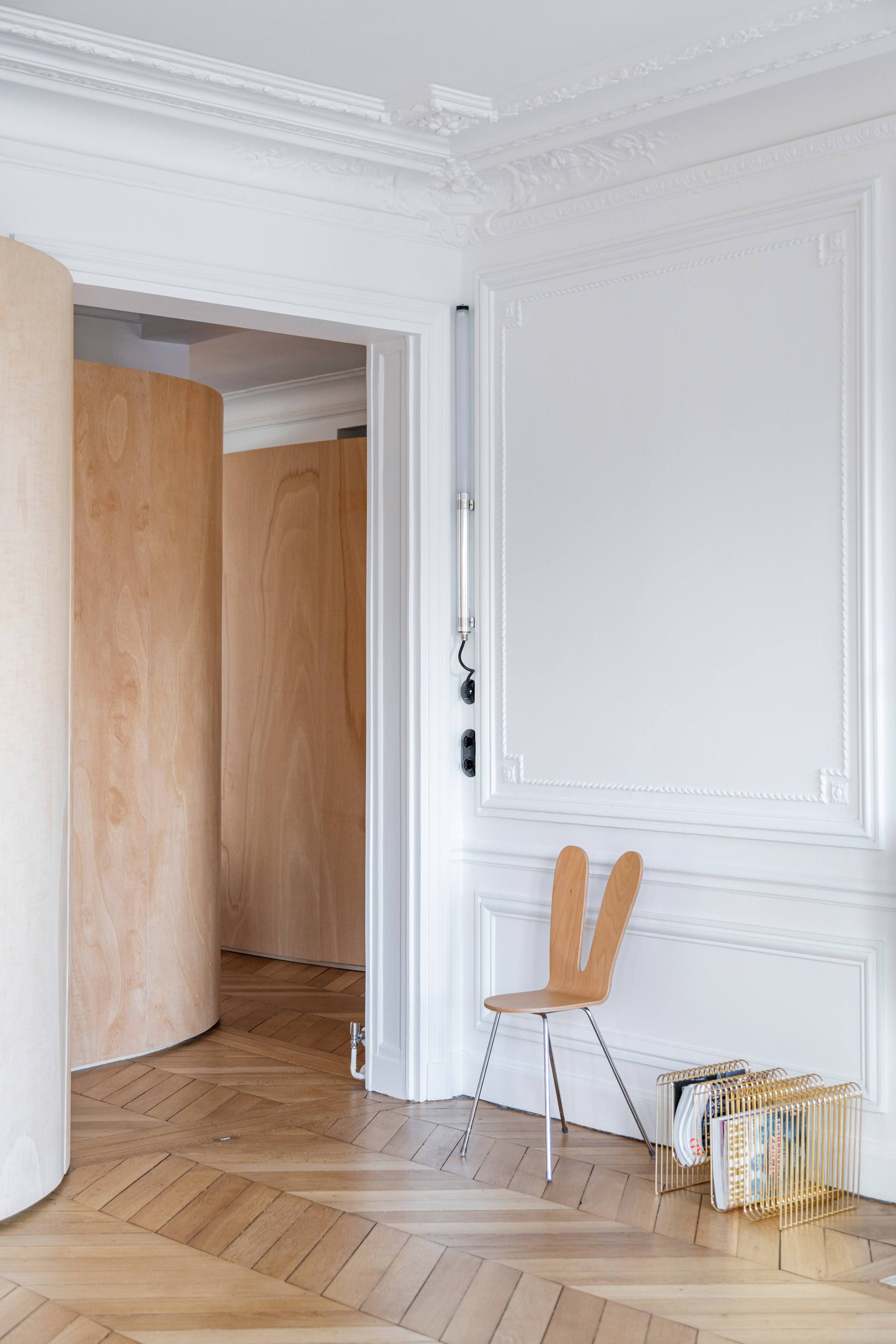 After knocking through the problematic partitions, the studio erected a snaking plywood wall that divides the apartment into three simple zones: a living area, master suite, and sleeping quarters for the child.

The wall was prefabricated off-site by a carpenter, who used moulds and laser cutting to achieve its sinuous form. It was then transported to the apartment and assembled over the course of just one day. 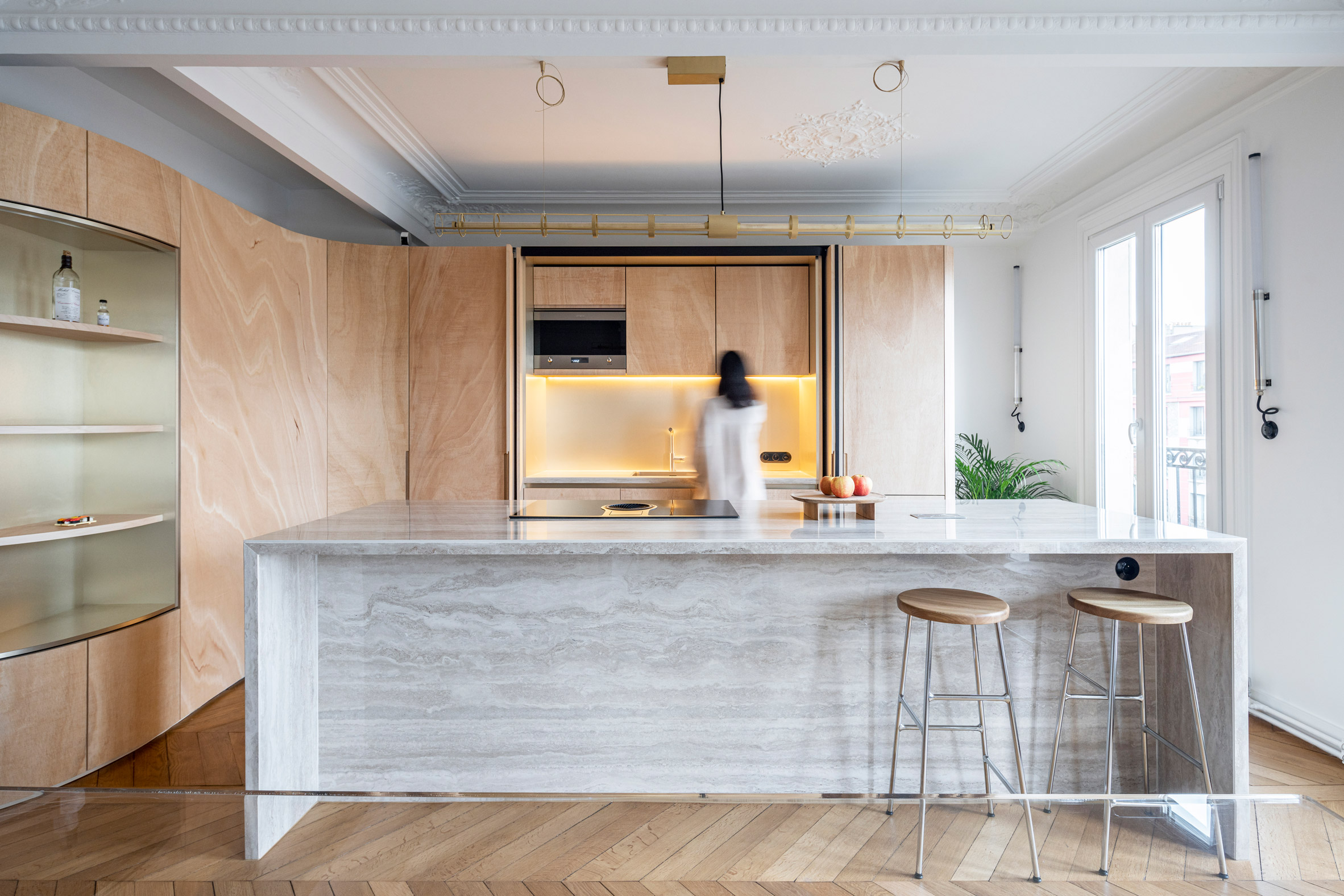 Part of the wall that appears in the sitting room has been inbuilt with a shelf where the inhabitants can store their books or personal ornaments.

The wall’s curved form is also echoed by the bean-shaped sofa that sits at the centre of the space, upholstered in a warm-beige fabric. 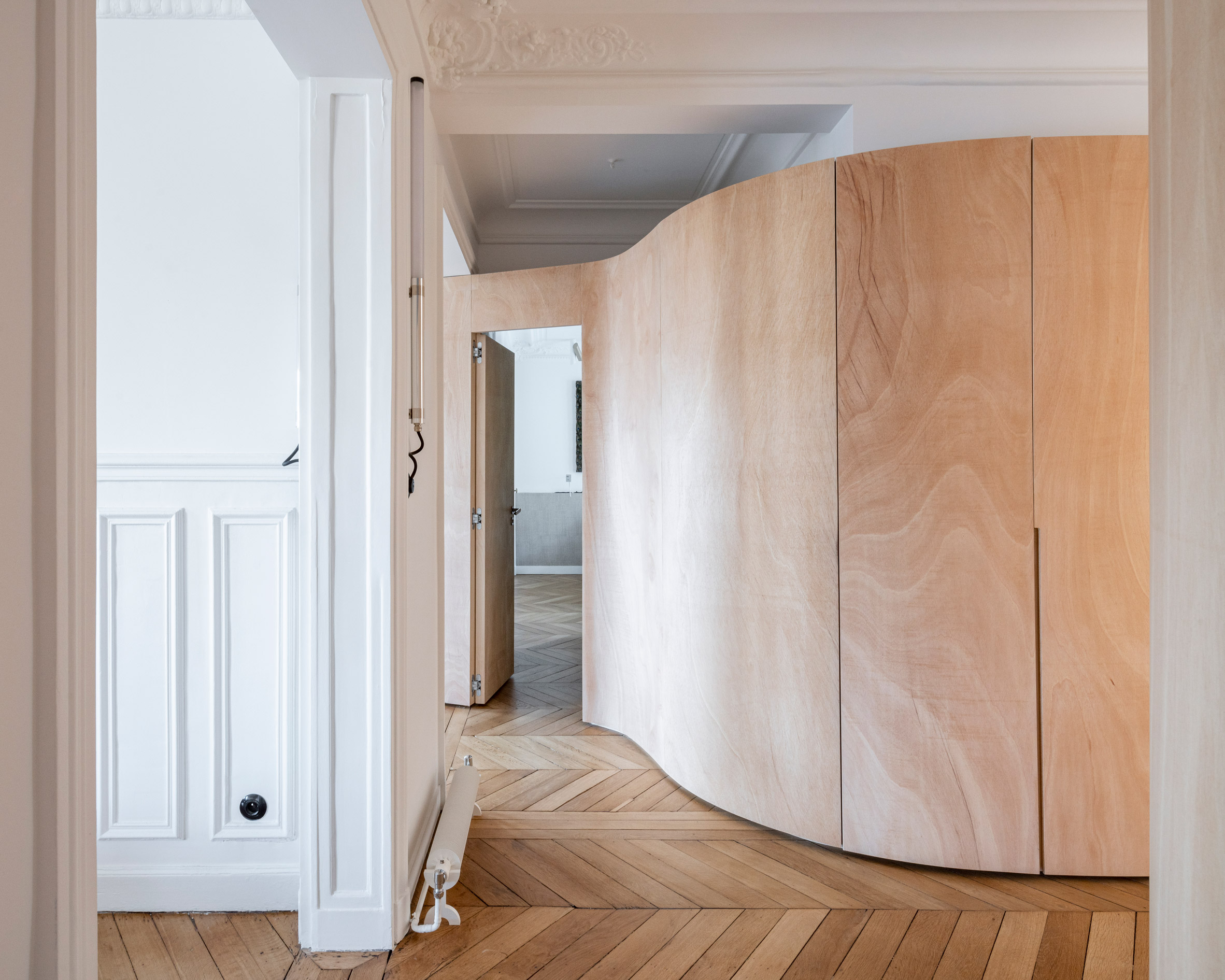 In the kitchen, the wall wraps around the rear of the room to form storage cupboards – these can be pushed back to reveal the sink and appliances like the microwave.

The room is anchored by a huge breakfast island crafted from grey travertine marble. 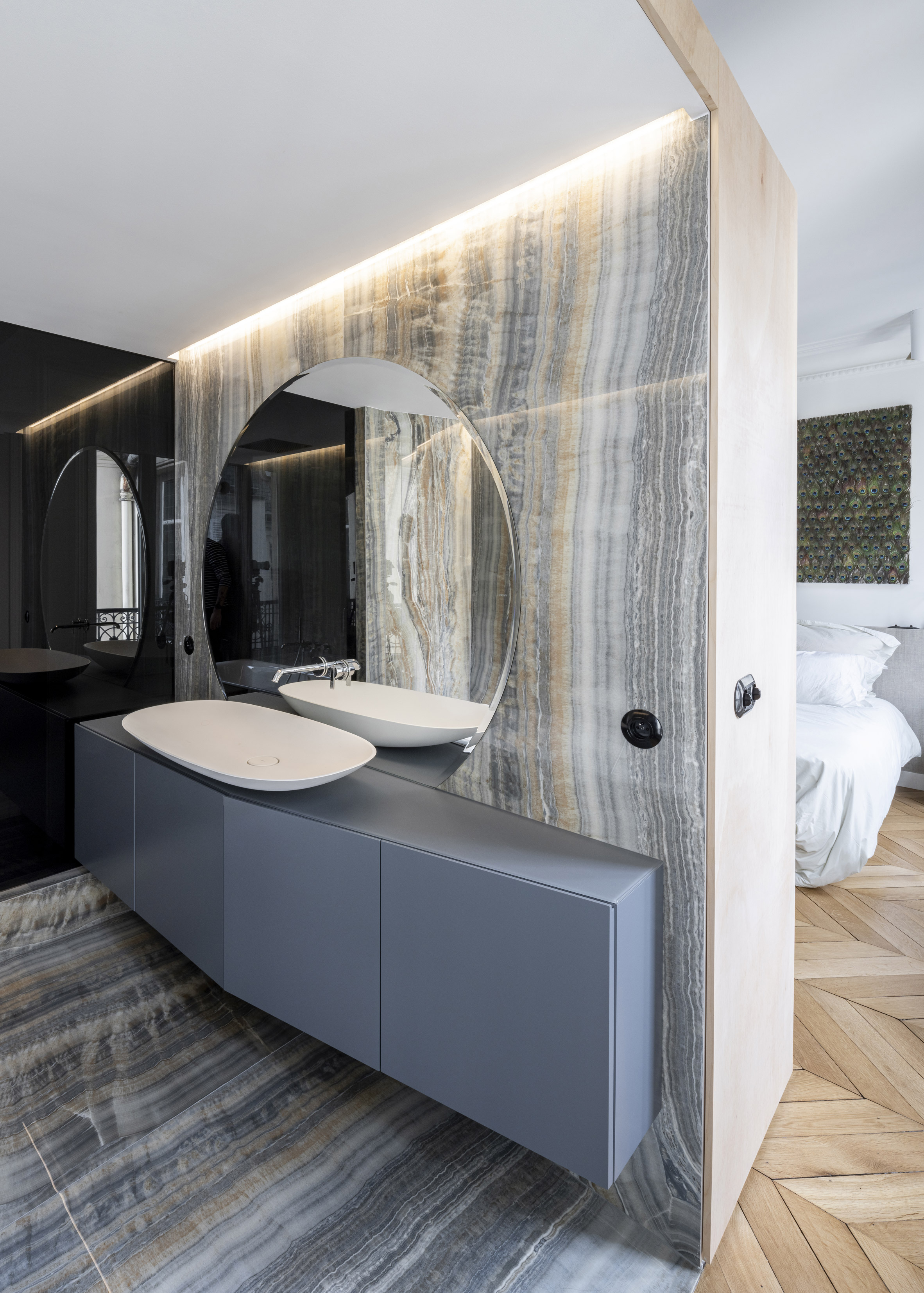 A door leads through to the master bedroom. It features an en-suite bathroom that’s entirely clad in onyx, a luxurious material purposefully selected by the studio to contrast the humble plywood that’s been used to make the wall.

Hidden doors in the wall also give access to the child’s bedroom, which includes a neon-orange reading nook, and the parents’ dressing room.

To make this space appear slightly modern, the ceiling has been overlaid with a sheet of polycarbonate. 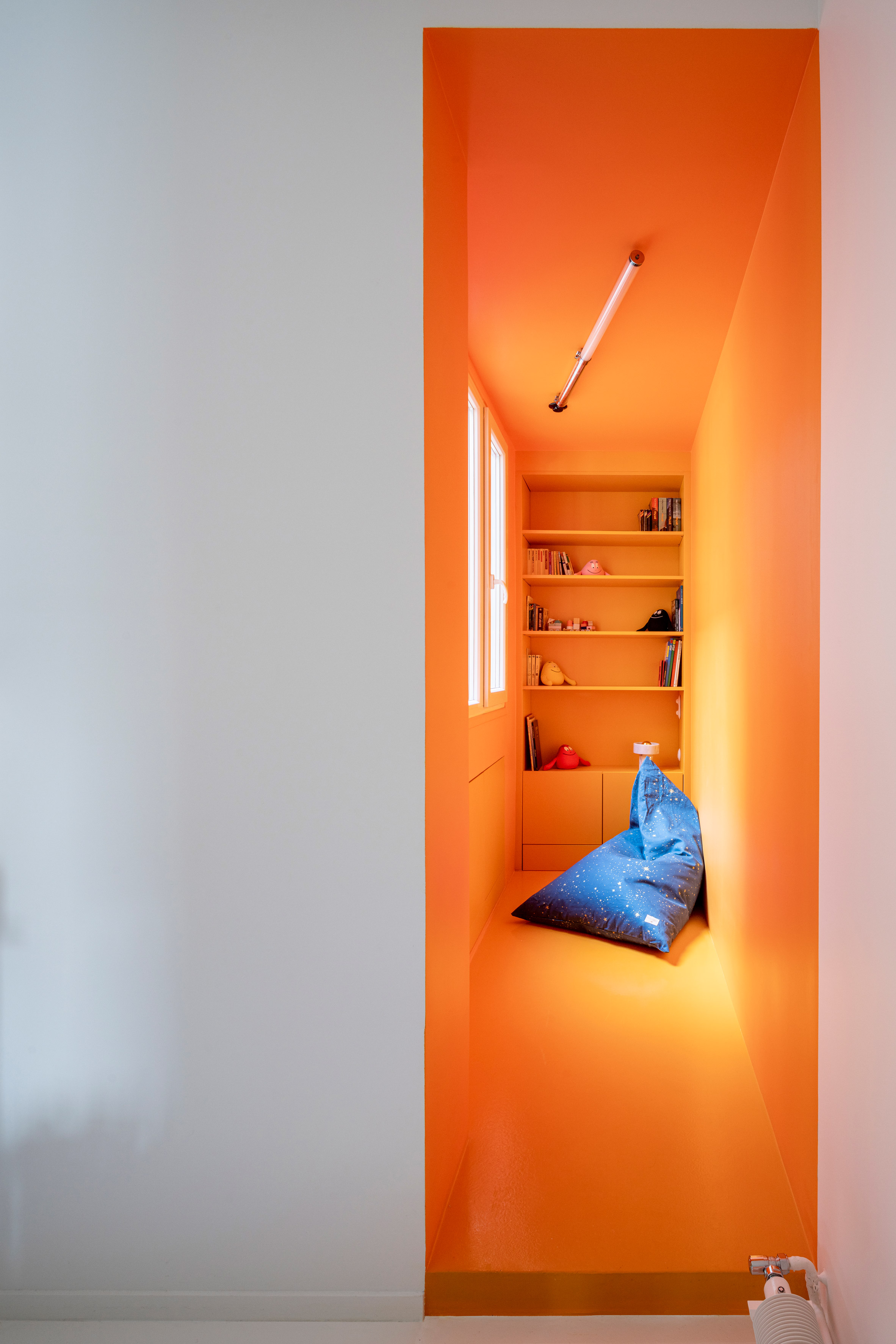 Minimal tubular lights have also been installed throughout the apartment to illuminate living spaces.

“I really wanted to enhance this dichotomy between ancient and contemporary,” added Toledano. “It’s very relevant in a city like Paris where both are in a constant dialogue.” 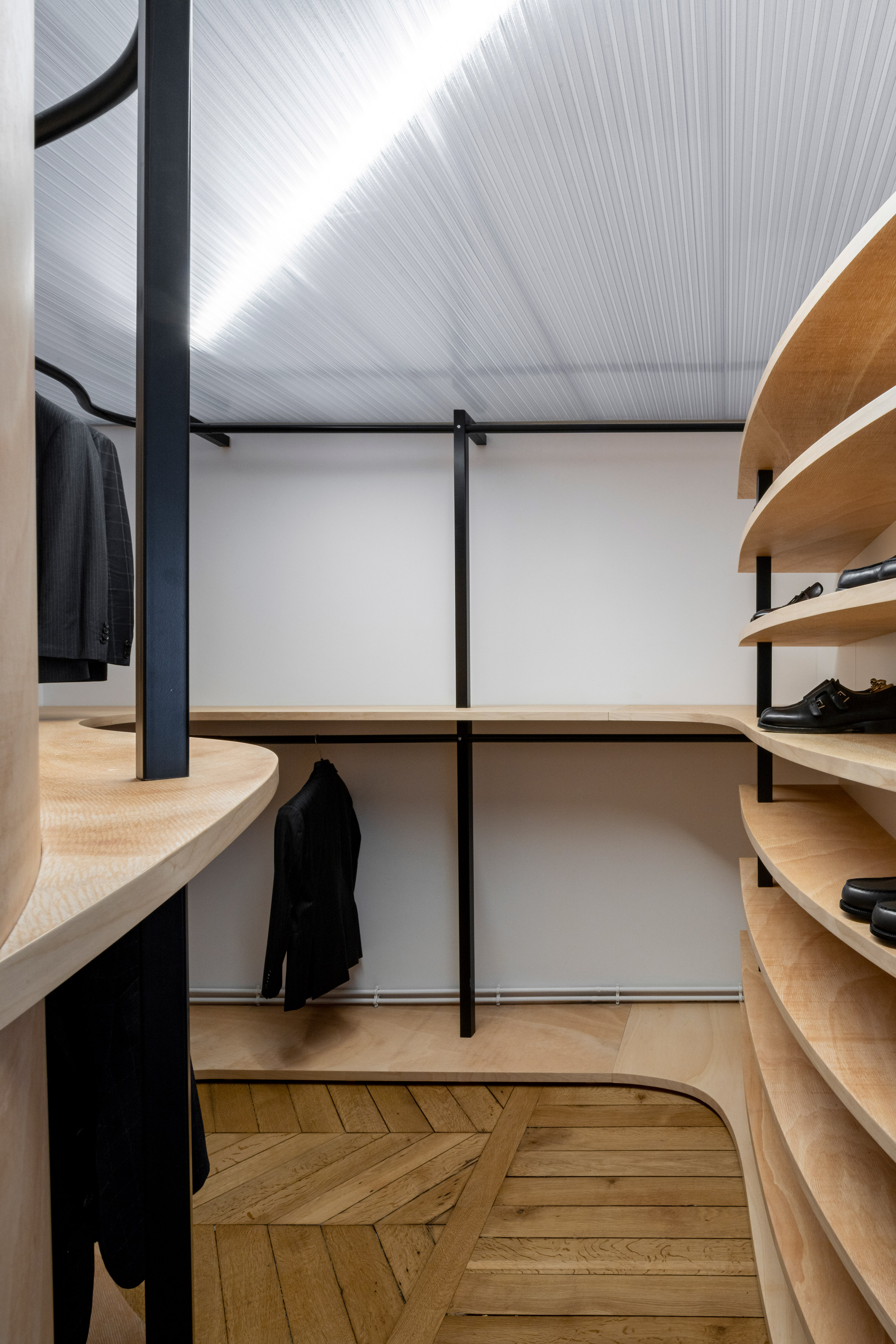 Toledano + Architects was established in 2013 and works between offices in Paris and Tel Aviv. The studio overhauled a duplex apartment in the Israeli city back in 2016, suspending a black-steel staircase at its centre.

Photography is by Salem Mostefaoui.