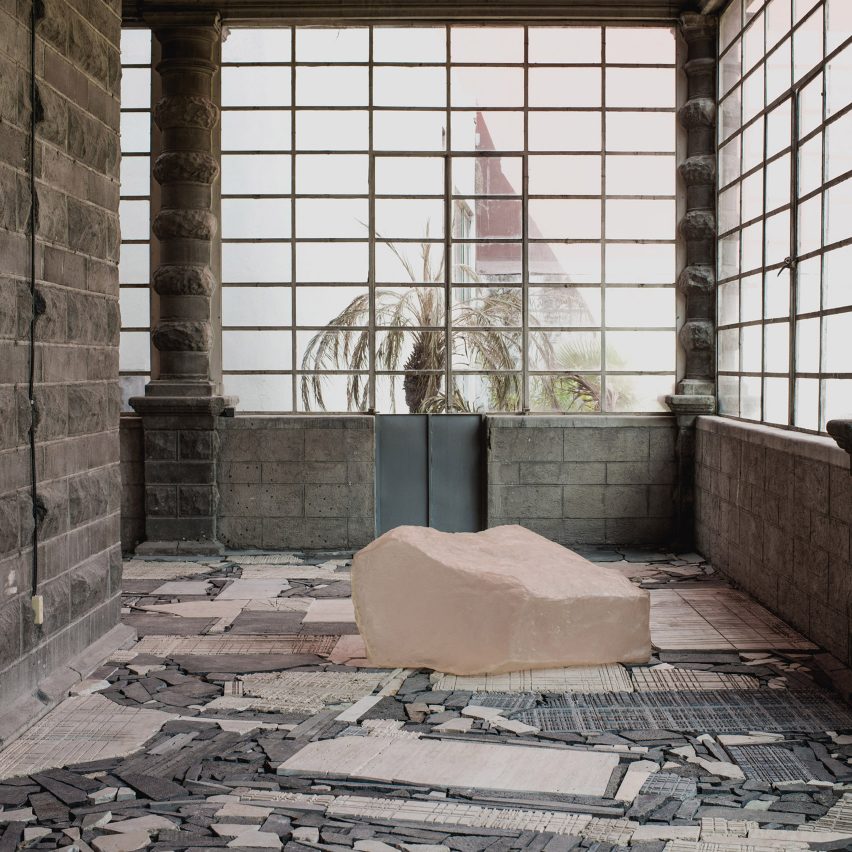 A curving metal streamer, mirrored room screen and bulbous fibre chandelier are among the objects in an exhibition hosted by travelling gallery Masa in Mexico City.

The show exhibits a mix of commissioned works and limited-edition pieces, which the gallery said can’t be sorted into a defining archetype or category.

“Masa celebrates contradiction as a reflection of the ongoing process of becoming and self-definition – presenting objects as tools for living, contemplation and, most of all, reconciliation,” Masa said.

“The pieces in Recover/Uncover exist along a spectrum of indeterminates rather than at a stasis, defying strict archetypes in favour of an ongoing exploration of purpose and expression.”

Masa is hosting the show inside a castle located in Mexico City’s San Miguel Chapultepec neighbourhood, built by the German Royals in the early 20th century. Its architectural features include a round turret on its stone exterior, brick walls and dark wood on the panelling, framing and columns inside.

The castle marks the second location for the travelling gallery after it launched last year with an exhibition inside a 1970s house in Mexico City.

As with the inaugural show, the objects are dispersed around the castle. Some rest on plinths while others are fixed to the walls and ceilings of the historic interior.

Esrawe’s looping ribbon-like metal sculpture hangs over the castle’s decorative wood stairwell by attaching to the ceiling and adjacent wall.

Mexico City collective VIDIVIXI has designed a screen fronted with a chrome mirror that divides a room, while also appearing to expand it through its reflective surface.

Other objects inside the gallery include a light fixture by American designer Misha Kahn and a wood bench by Tbilisi studio Rooms.

A full-room installation by Perla Krauze makes use of discarded materials, such as cracked stones and incised cutting mats.

The exhibition extends outside where a number of sculptures occupy the grassy lawn, including a circular formation of keystones by Adeline de Monseignat and chairs constructed from rocks by Mario García.