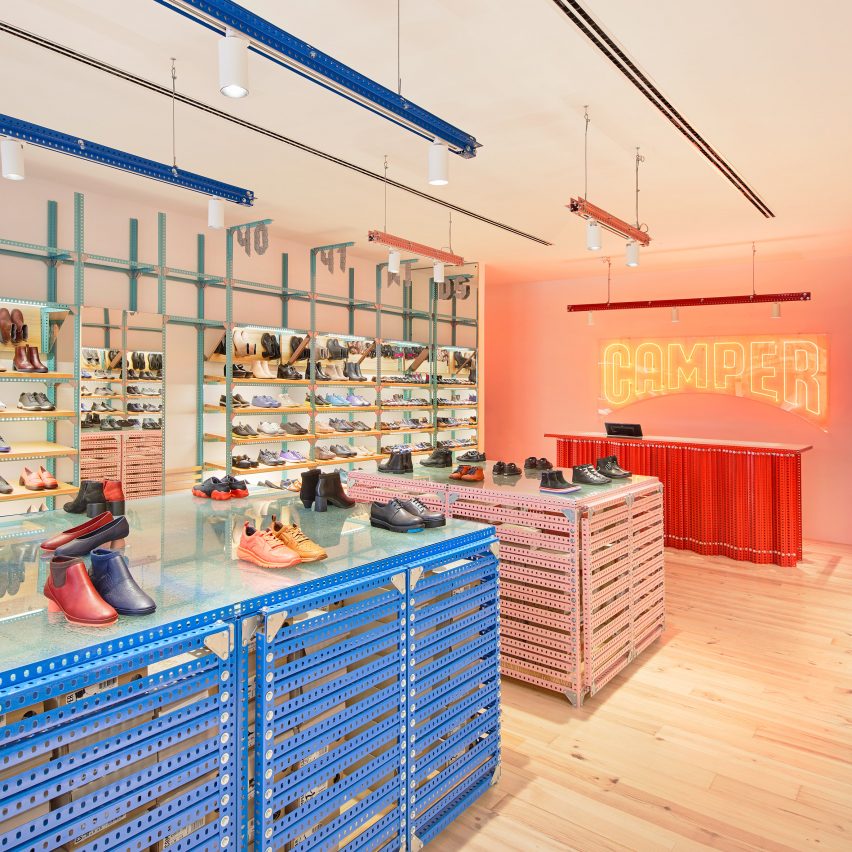 The store in Málaga has a raw, industrial aesthetic that has been softened with a colour palette of bright blues, pinks and reds.

Penadés used just three basic elements – perforated metal profiles, corner plates and bolts/nuts – in the design and construction of the shop. The designer and four assistants built the store together.

“We did the whole shop in four intense weeks,” Penadés told Dezeen. 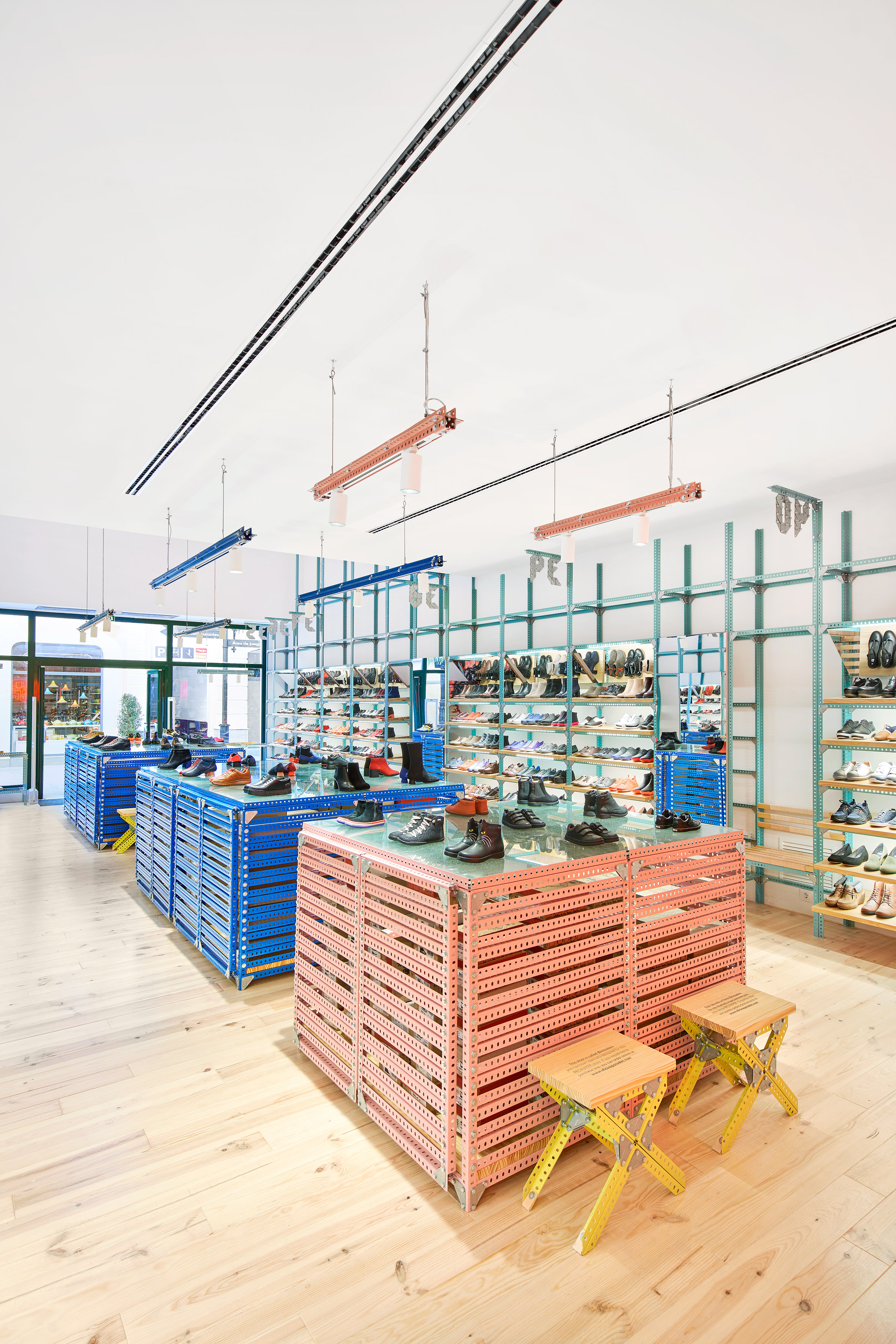 The three elements were used for everything, from seating units to the checkout counter and light fixtures in the store. Even the shoe sizes on the shelves are marked with numbers created from bolted-together corner plates.

“I decided to create a code regarding the function of every area of the shop: wall displays are green, table displays are blue for men and women and pink for kids, seating is yellow and paying is red,” the designer said. 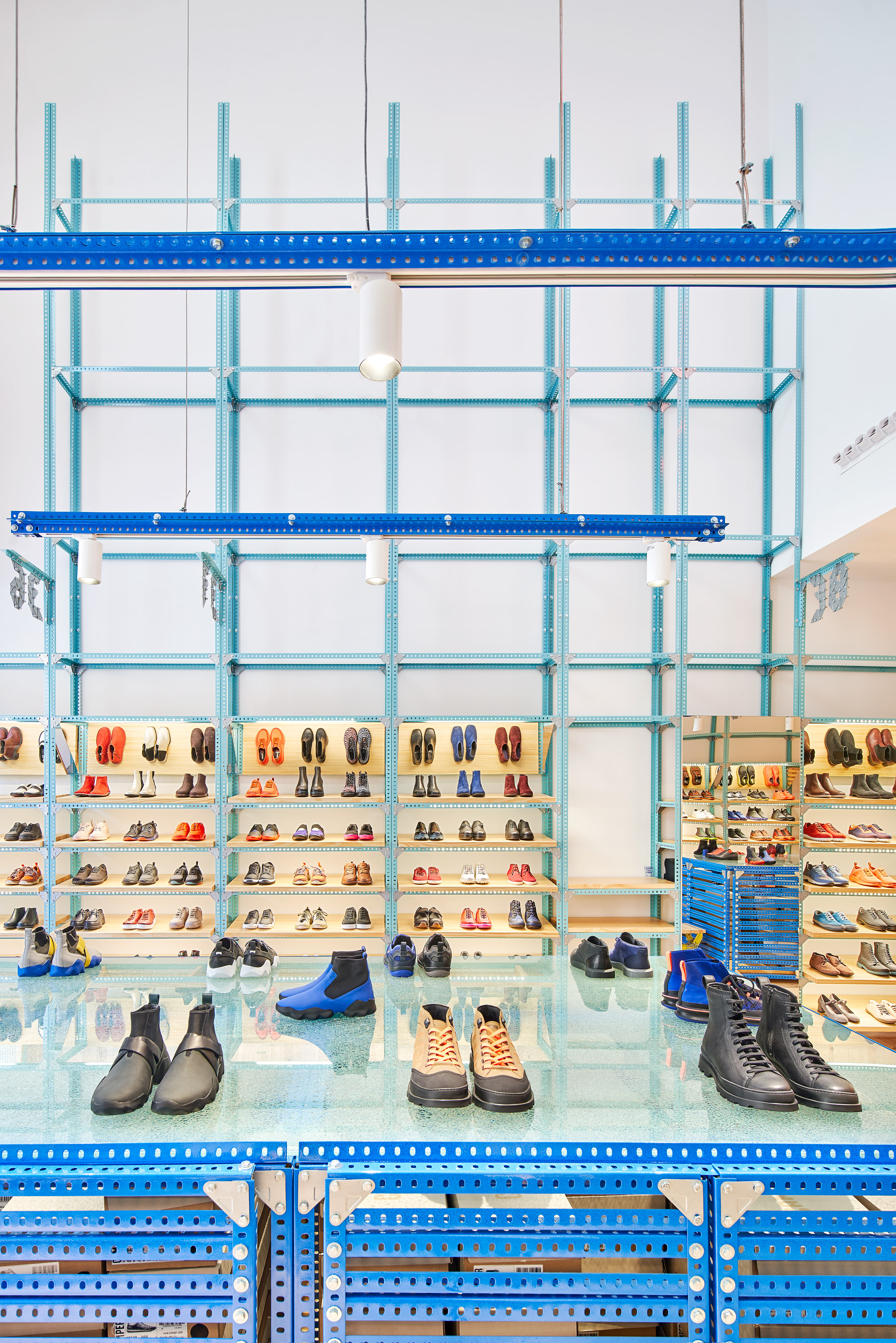 The design of the store is a nod to Camper’s warehouse in the small Mallorcan village of Binissalem, which is primarily used as a storage space for old Camper stores that have been refurbished.

The space also functions as an archive and contains pieces custom-made for the brand by designers including Michele De Lucchi, Gaetano Pesce, Ingo Maurer, the Bouroullec brothers and Konstantin Grcic. 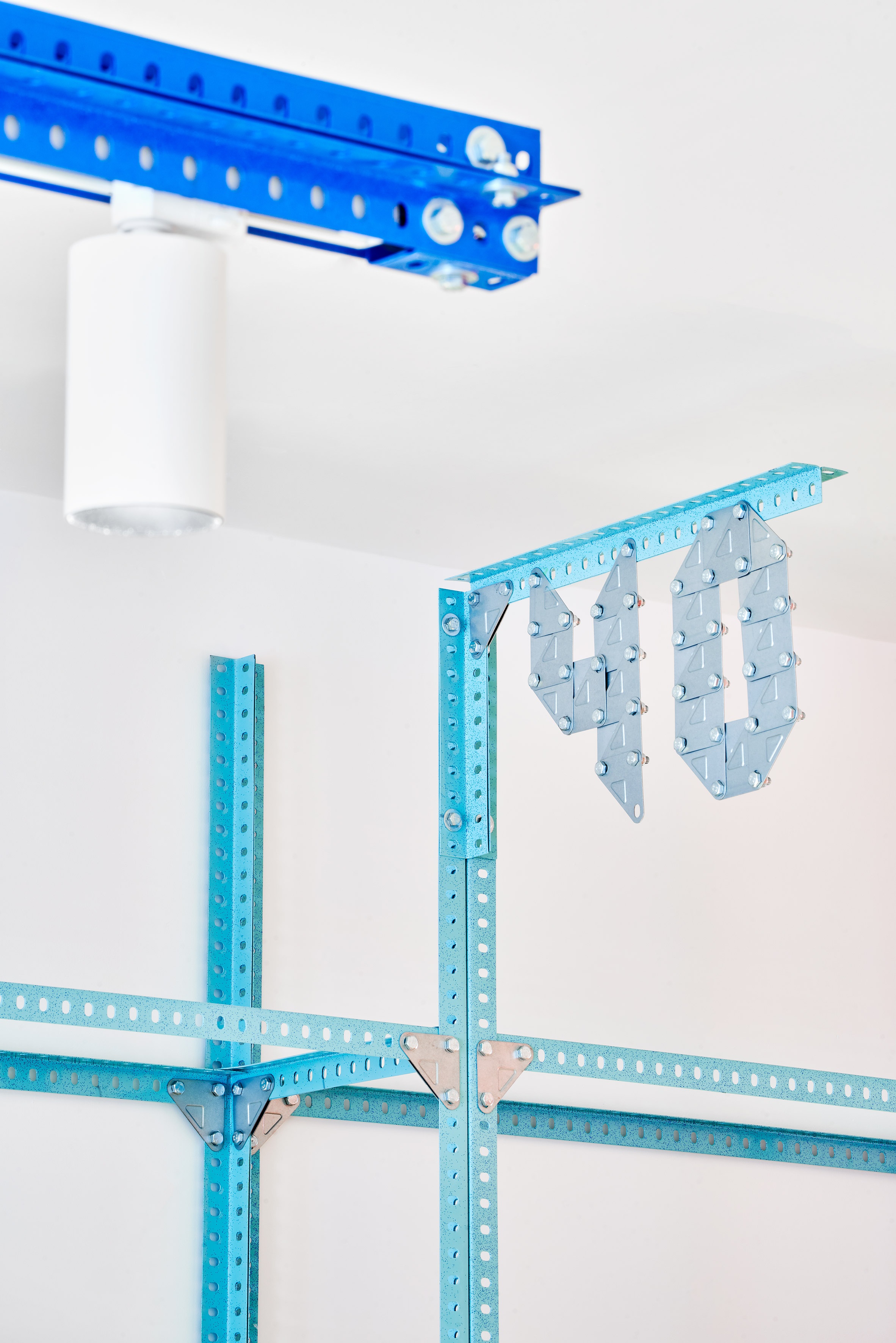 When visiting it, Penadés was immediately drawn to the warehouse space and decided to use it as a temporary factory.

“It was this sort of irrational attraction that we sometimes have and we can not avoid!” said Penadés.

“When I entered and the Camper team started to open crates showing me all those museum-quality pieces from many maestros my mind was blown.”

“I could not get this image out of my mind of me working for a few weeks in this space, fabricating the entire shop myself, directly one to one,” the designer said. 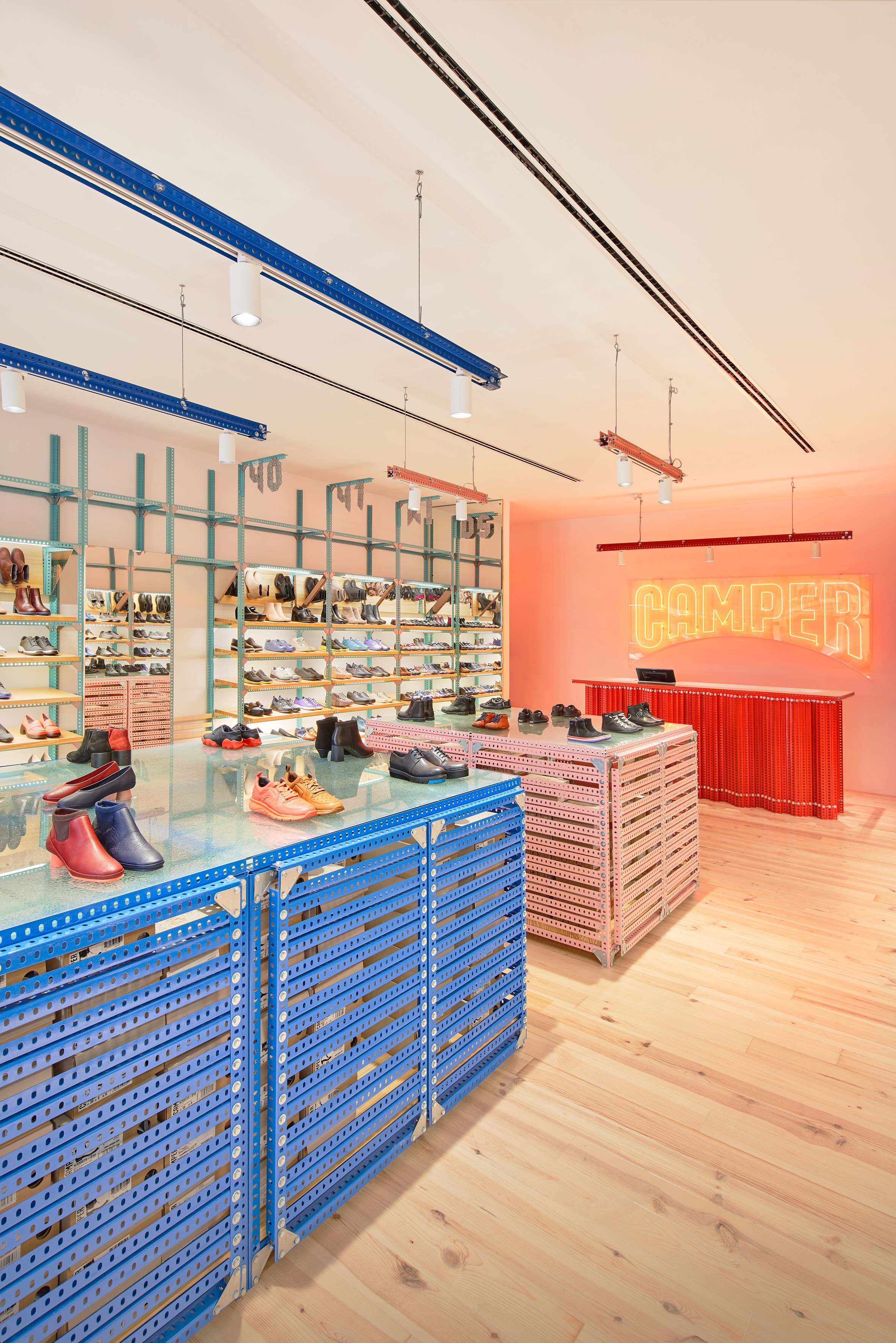 Penadés moved to Mallorca with his team in the summer of 2019 to construct the store.

“At the beginning the brief was to make a shop with what I could find there and not adding anything new,” he explains.

“But I didn’t want to put some of those great works together and create a sort of ‘one-off’ store; I was more interested in generating a system that could potentially be replicated in other Camper stores in the future.” 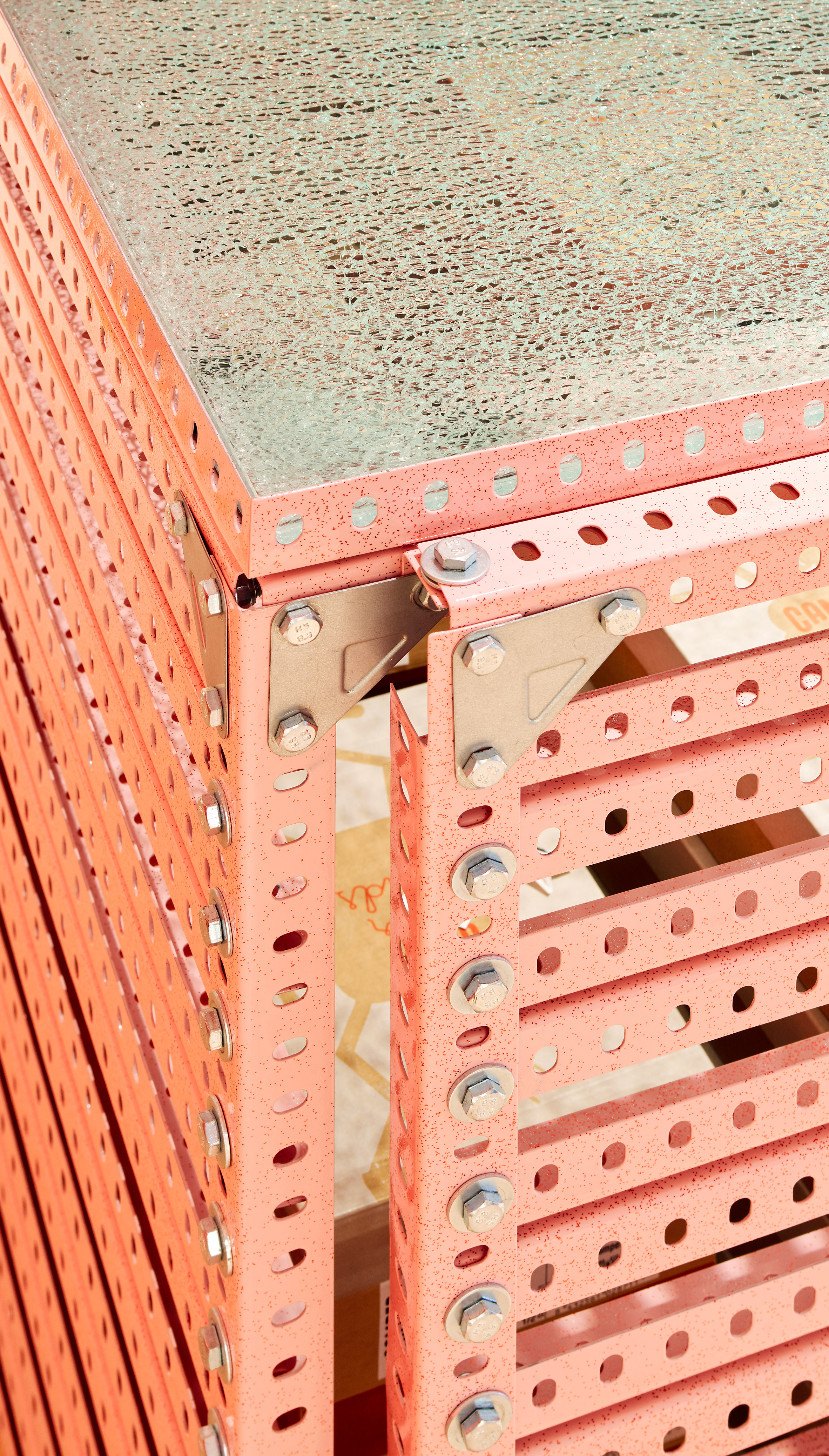 The project is a part of Camper Together, a model of collaboration in which Camper teams up with designers to create unique stores and products. Previous collaborations include Jasper Morrison’s Ni-jo sandals that reference minimal tatami mats.

Penadés was born in Málaga and established his own practice in Madrid in 2015 after graduating from the city’s design and fashion school, IED. He has previously worked with repurposed materials, and used aluminium profiles to create a collection of fluted vases for furniture brand BD Barcelona Design.

Photography is by José Hevia.