Intervention Architecture has installed shapeshifting furniture in a Barbican apartment in London, allowing it to transform from a home into a dance studio.

Barbican Dancer’s Studio is a compact studio flat in the Barbican Estate, owned by a professional ballerina.

With very little space on offer, the challenge for Intervention Architecture was to create generous spaces for eating and sleeping, but to also give the client the room he needed to practice his choreography.

The Birmingham-based studio did this by developing a a multi-purpose piece of plywood furniture that can take on various configurations. 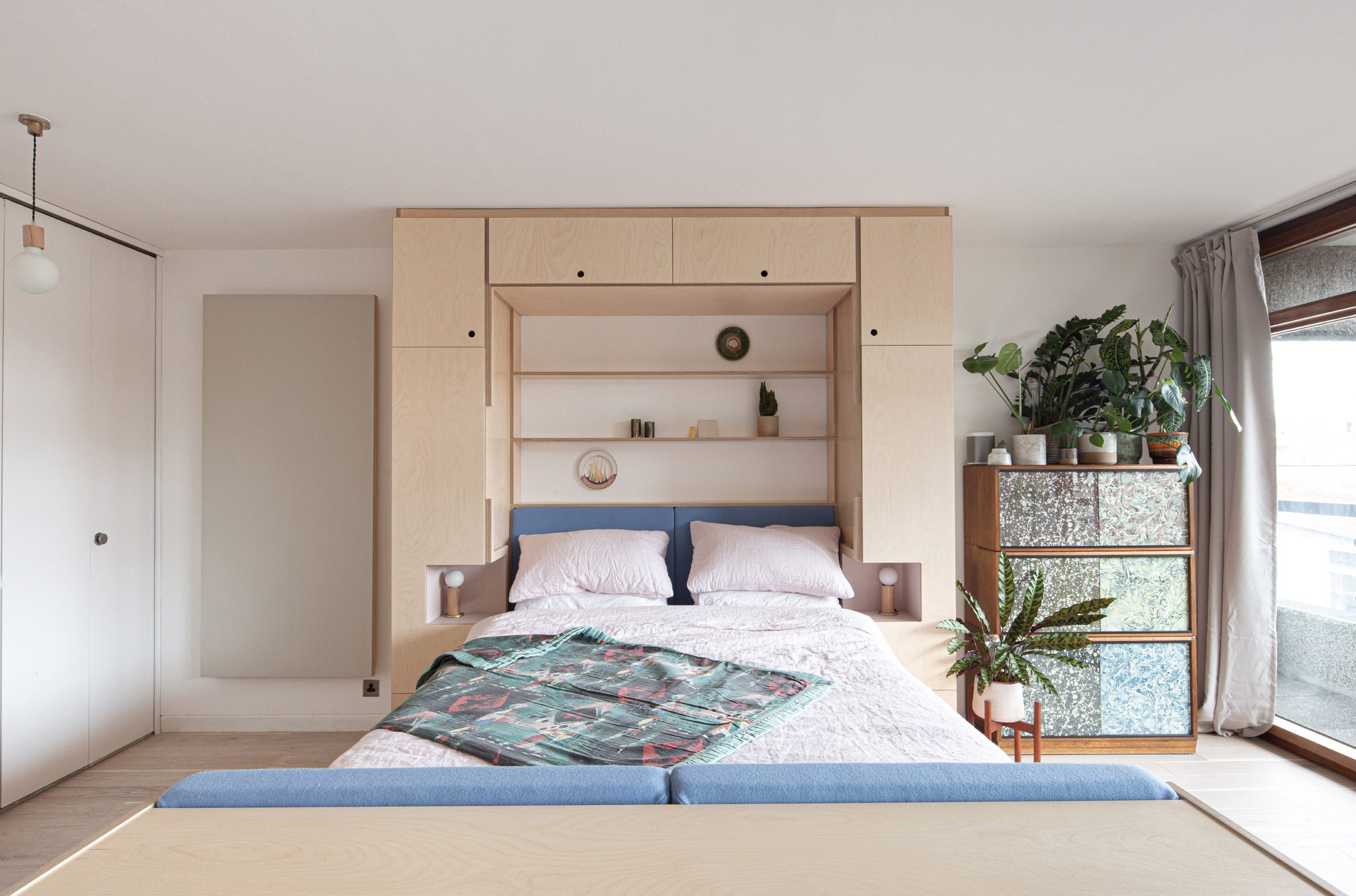 “We injected movement within the space with a changeable joinery solution to maximise storage, and create alternate uses and zones within a compact floor area,” explained studio director Anna Parker.

“As a young dancer, the client’s energy and dynamism was something we really wanted to capture in the ergonomics of the design in the Barbican studio space, to maximise the compact layout and bring it to life,” she told Dezeen. 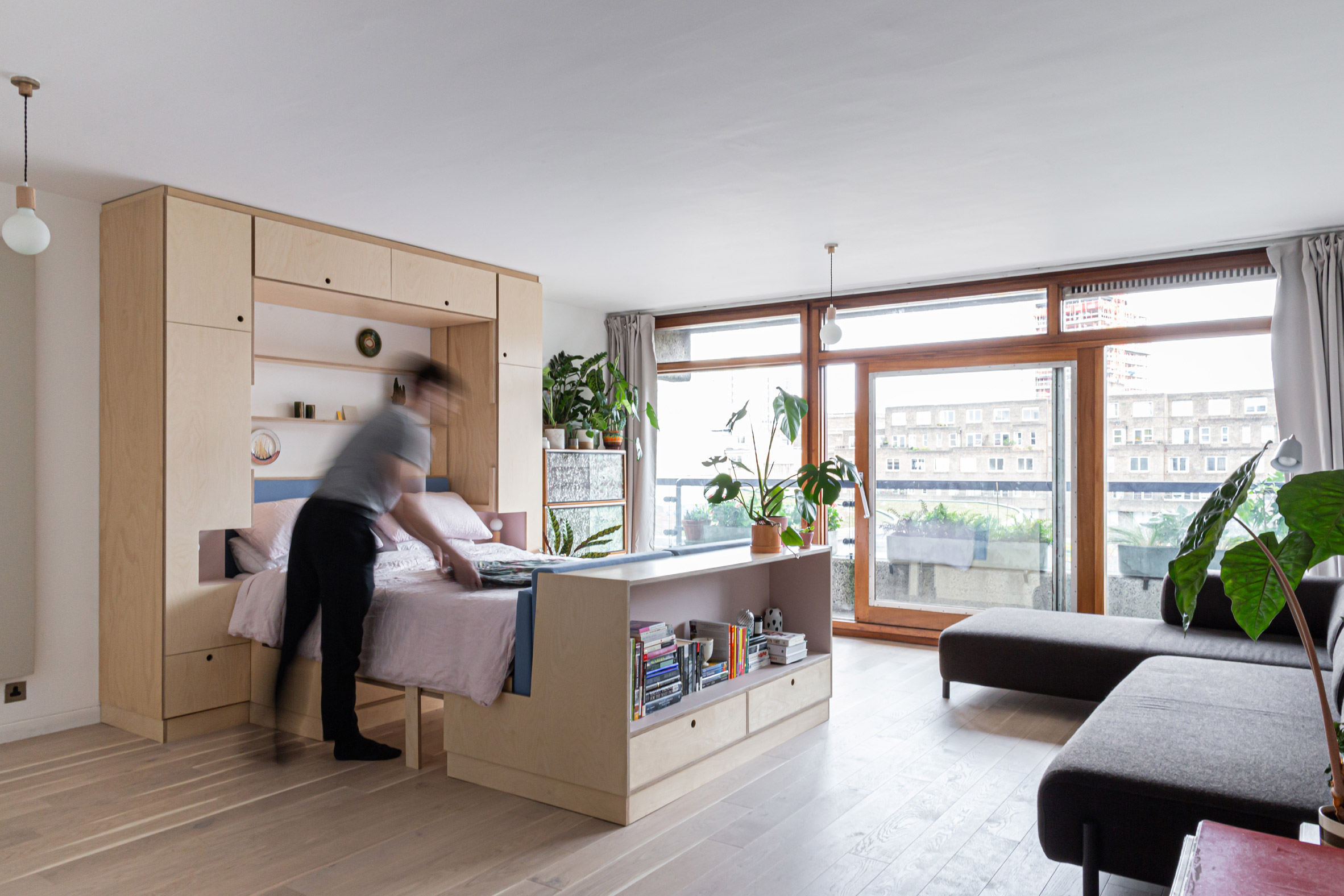 The space-saving furniture is made up of several modules. The main pieces are a ceiling-height storage unit, which integrates the fold-down bed, and a library-style bookshelf.

Both of these pieces integrate bench seating, which is revealed when the bed is folded up against the wall. A flat-pack table can also be slotted in, supported on removable legs. 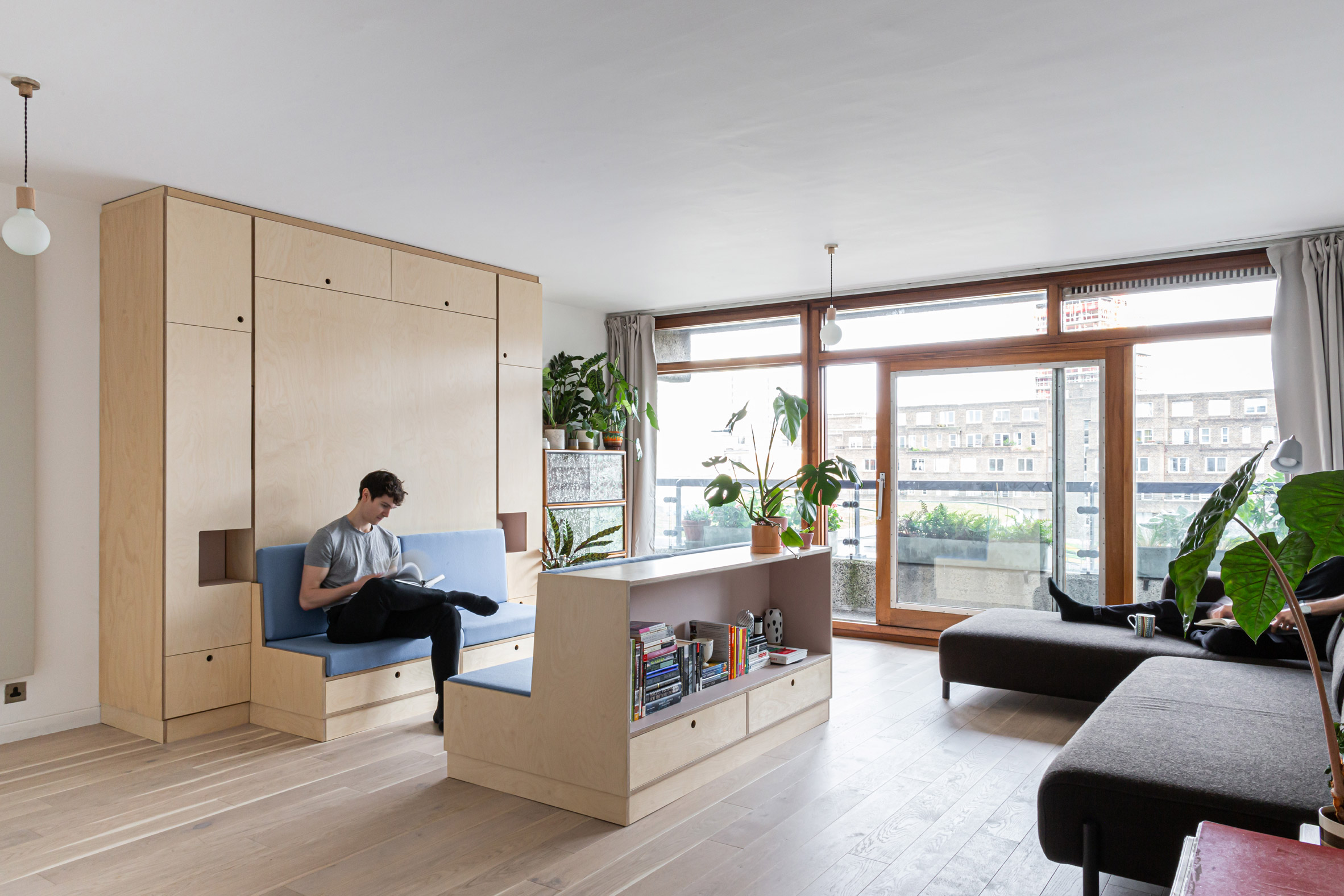 To make space for dancing, the library-style bookshelf and seat can be simply moved to a different part of the room. Other configurations are also possible –  the idea is for the space to be as flexible as possible.

“It is very quick to assemble and de-assemble from the main modes, around two minutes,” explained Parker. 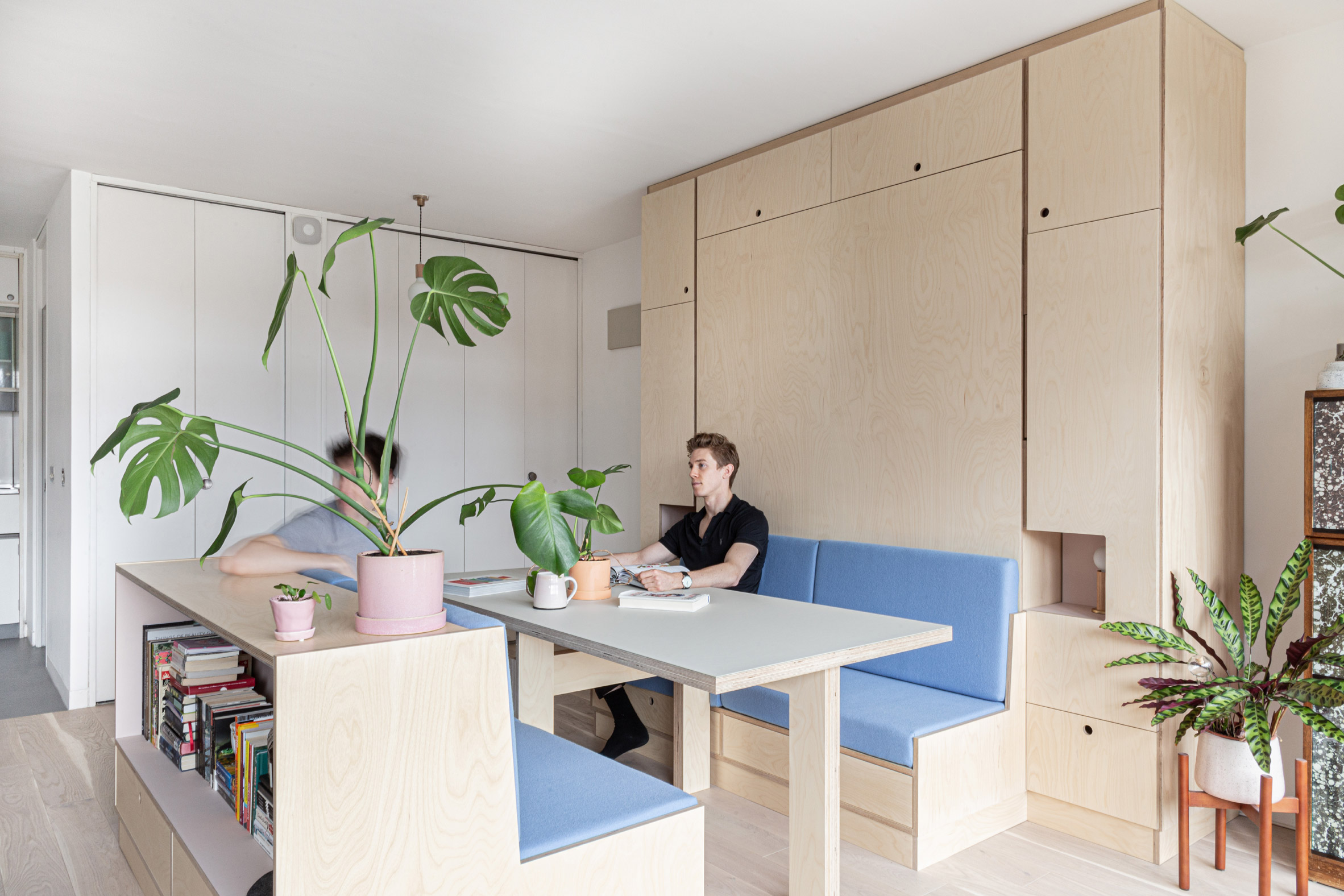 “It was important to us as designers to ensure we were specifying compatible systems for the moving/folding, so it would be easy to reconfigure,” she continued.

“This is especially essential when transferring from lounge/dining mode into bed mode, as you are most likely tired when doing this, so you don’t want to think too much about getting into your bed space.”

Various cupboards create plenty of space to store pillows, bedding and seat cushions when they are not in use. There are also small niches that function as bedside tables. 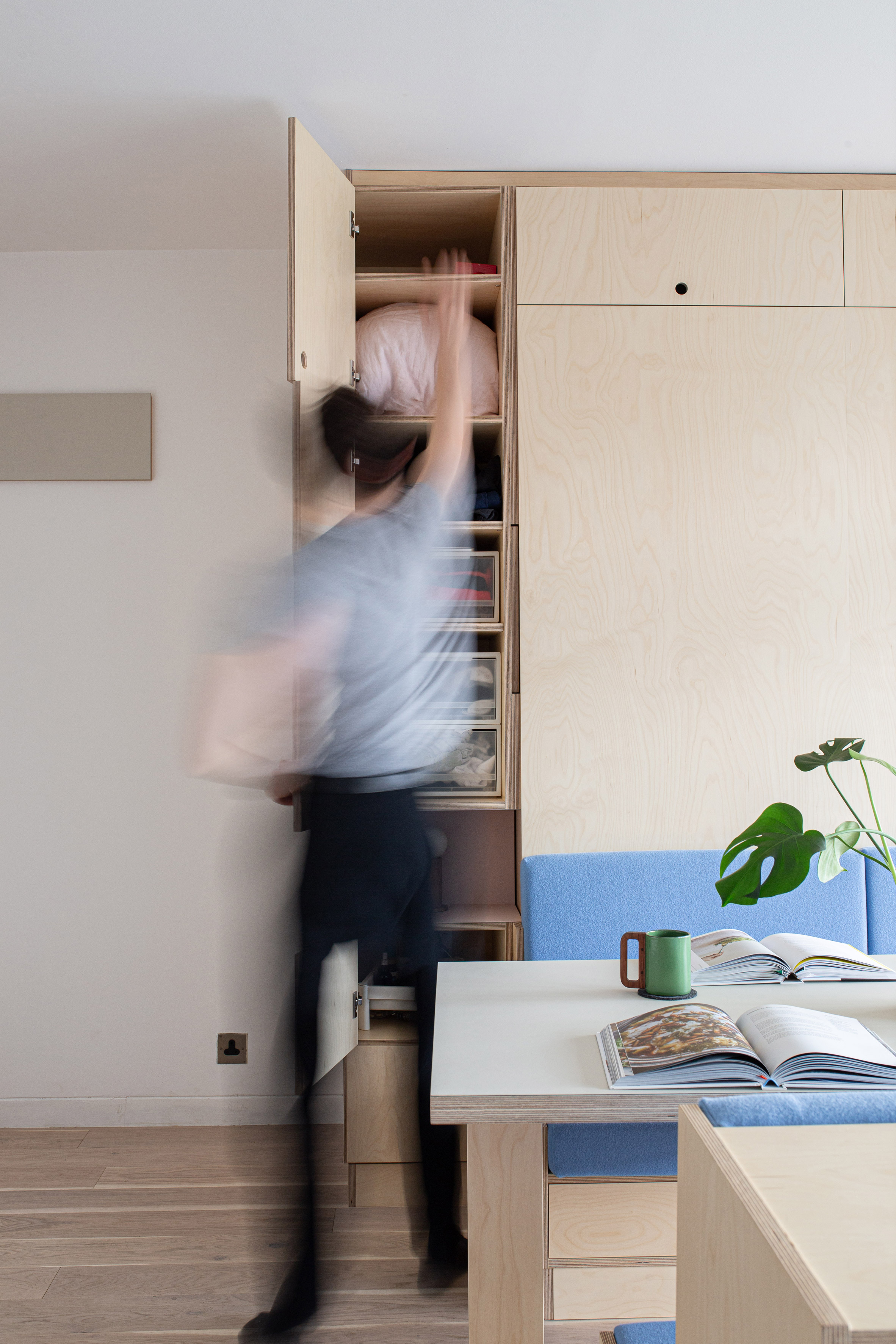 Flats in the brutalist Barbican Estate are highly sought after, thanks to their unique design aesthetic and east London location. Many have been refurbished recently, by designers including John Pawson and Ben Allen.

Intervention Architecture’s renovation was designed to celebrate the building’s architectural heritage. Shades of blue and pink were chosen to complement the raw concrete and exposed woodwork. 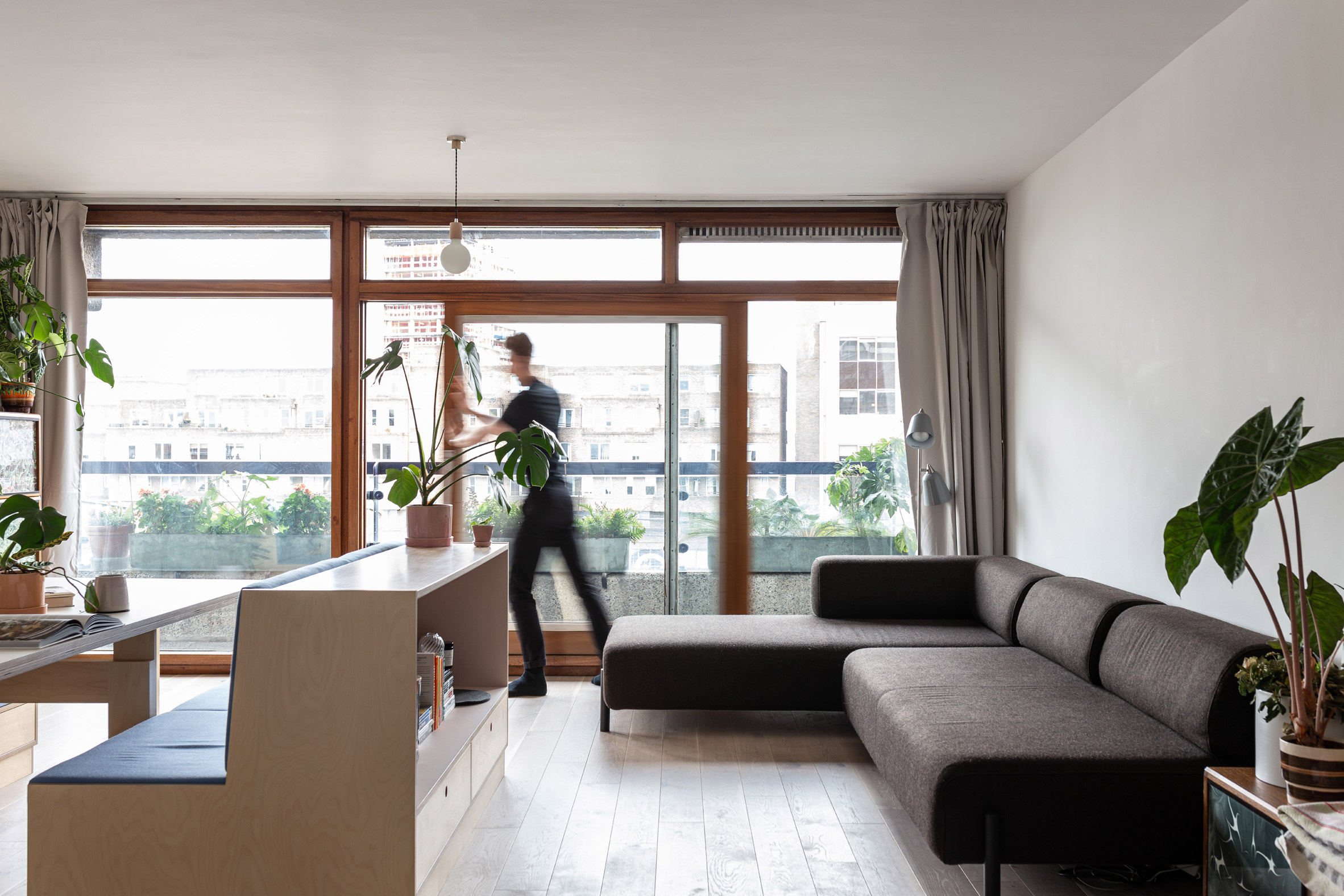 “We wanted to allow the original features to shine through as much as possible.” 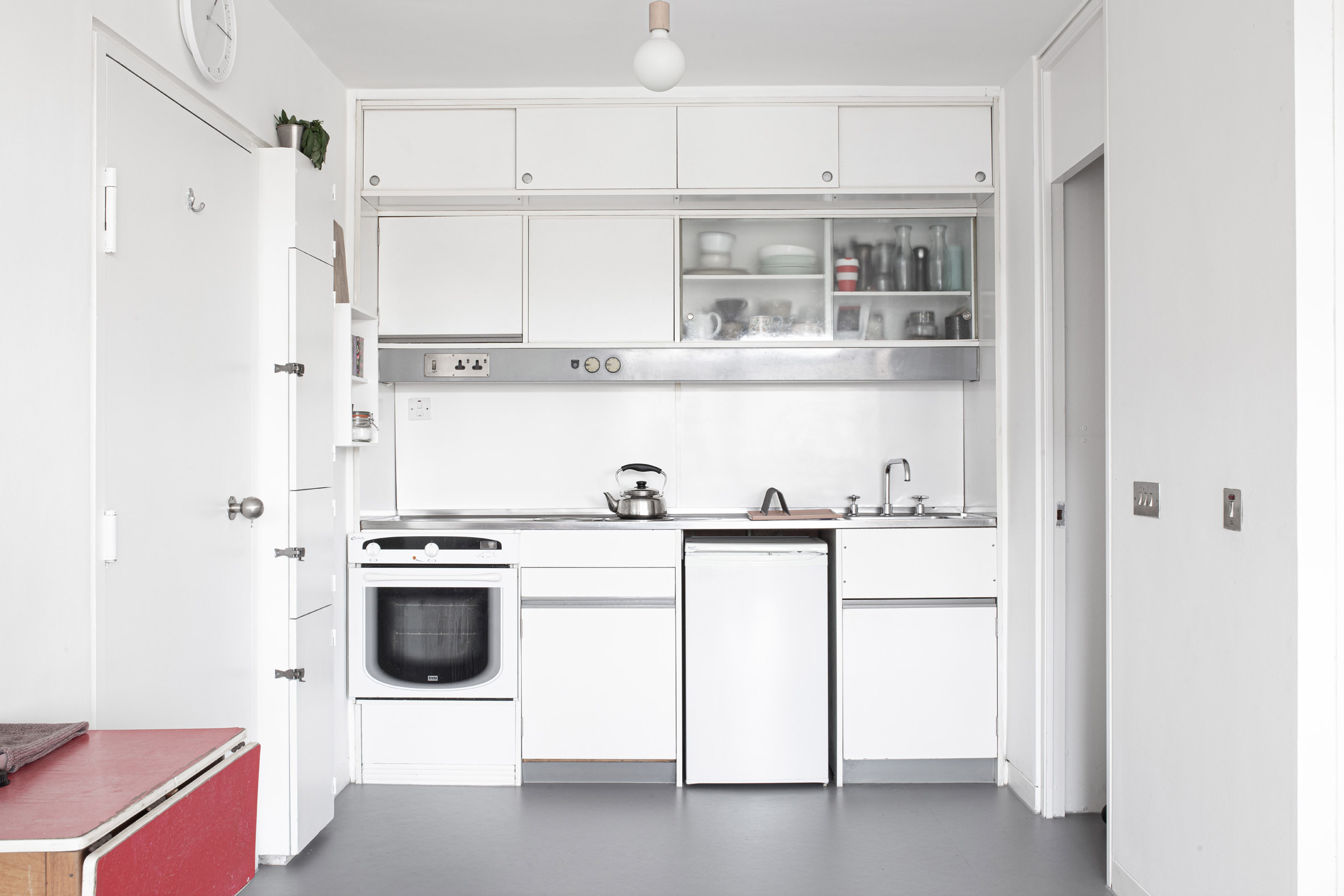 Because of the existing concrete slabs and underfloor heating, only thin flooring materials could be specified.

The design team got around this by adding engineered wooden flooring in the living space and simple grey marmoleum in the kitchen. 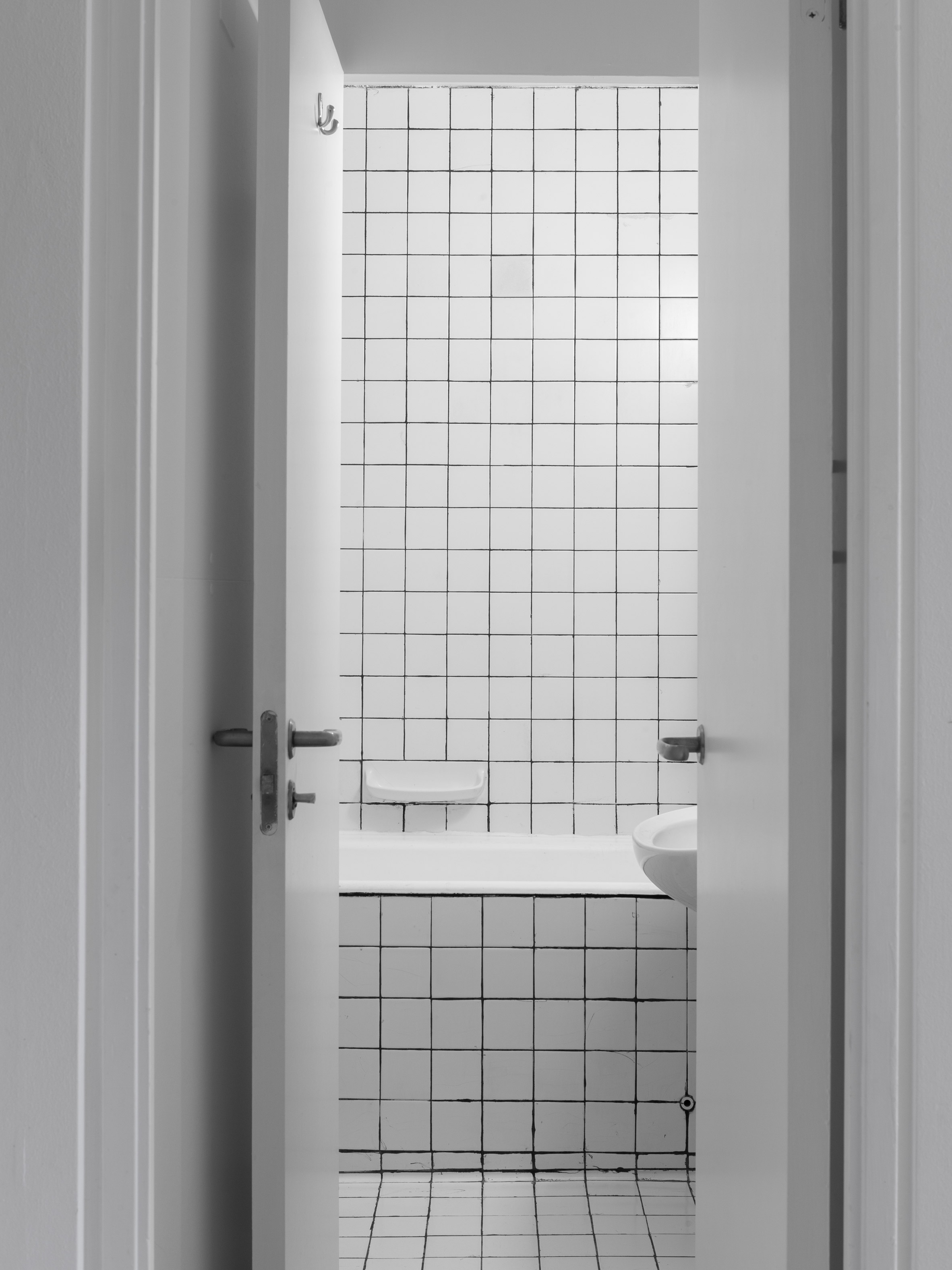 For the bathroom and kitchen, existing cabinets were retained and restored, and tiling was refreshed with a new dark grout.

Photography is by Handover.

The post Barbican flat by Intervention Architecture transforms into a ballet studio appeared first on Dezeen.