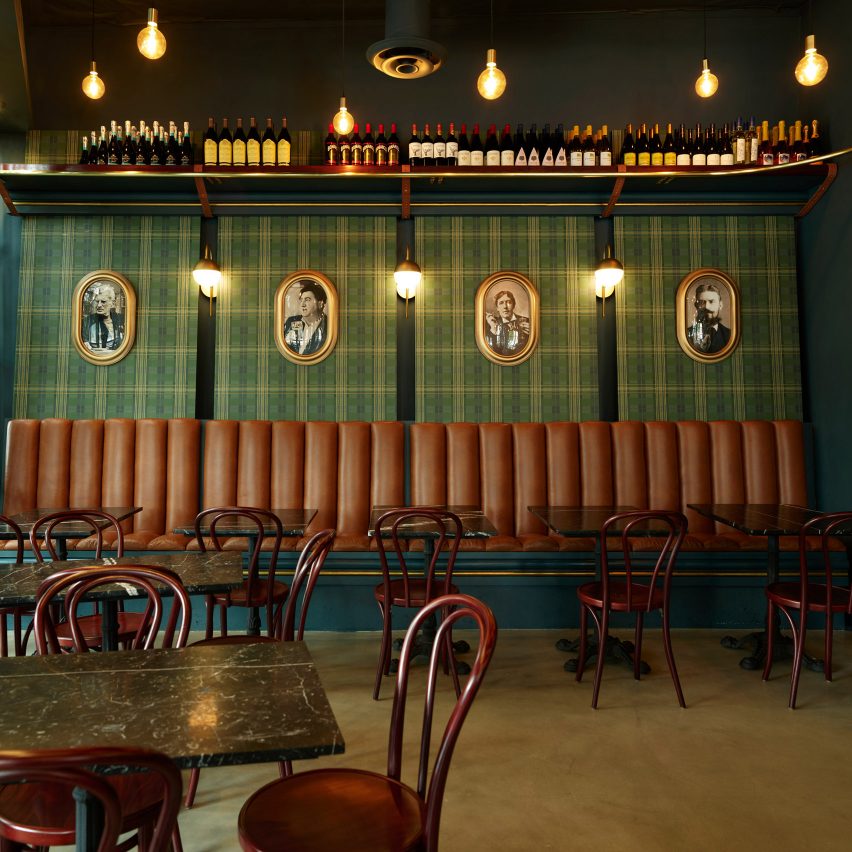 Green tartan wall coverings and leather banquette seating are among the references to traditional public houses that The LADG​ has used in this Culver City bar. 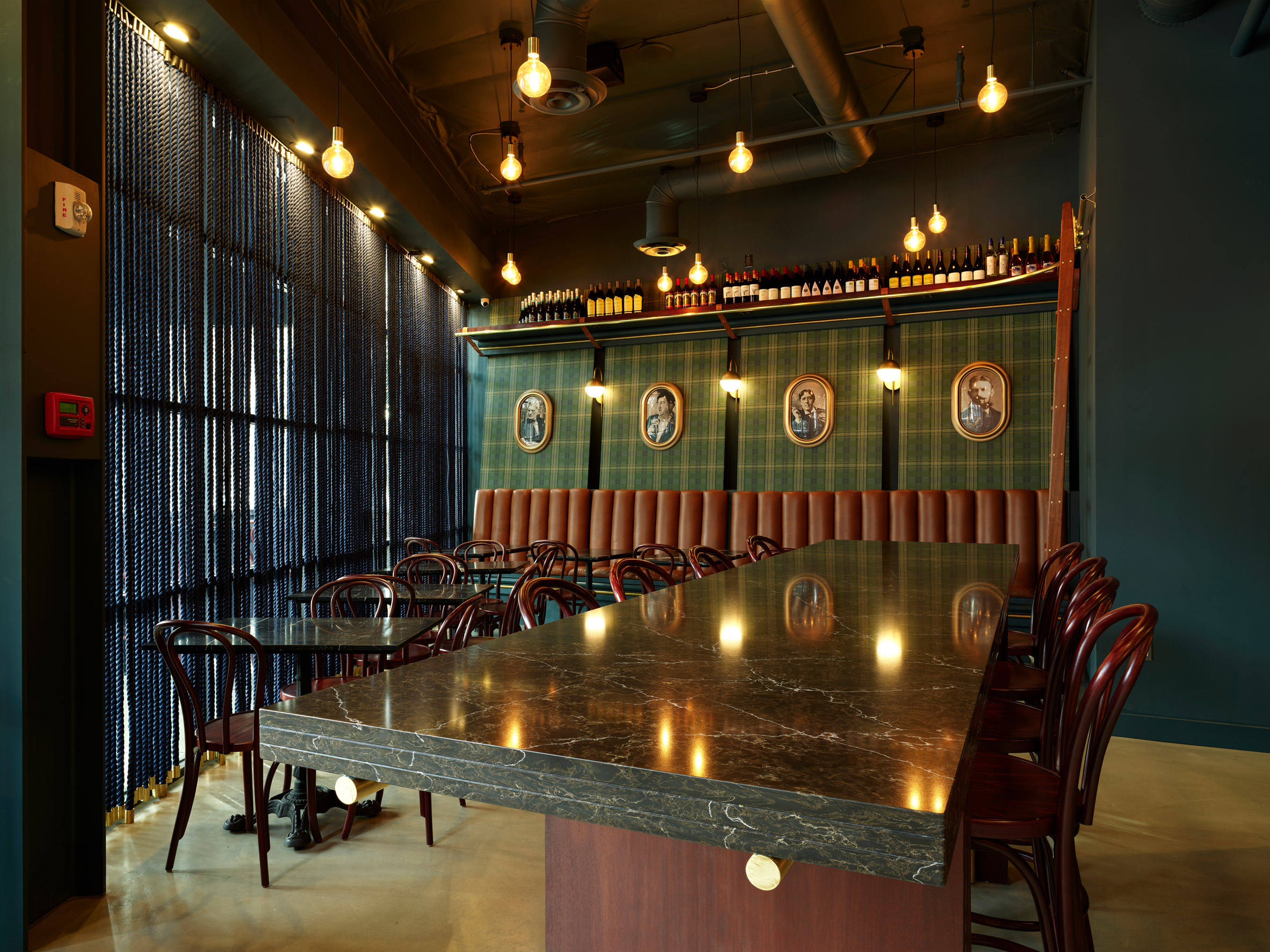 The Los Angeles Design Group​ (The LADG) combined period furniture and a number of materials, including brass and dark wood in Auld Fella restaurant and bar, which is located west of Los Angeles.

The aim was to give the space an aesthetic that was reminiscent of pubs in Ireland and Northern Ireland with modern touches. 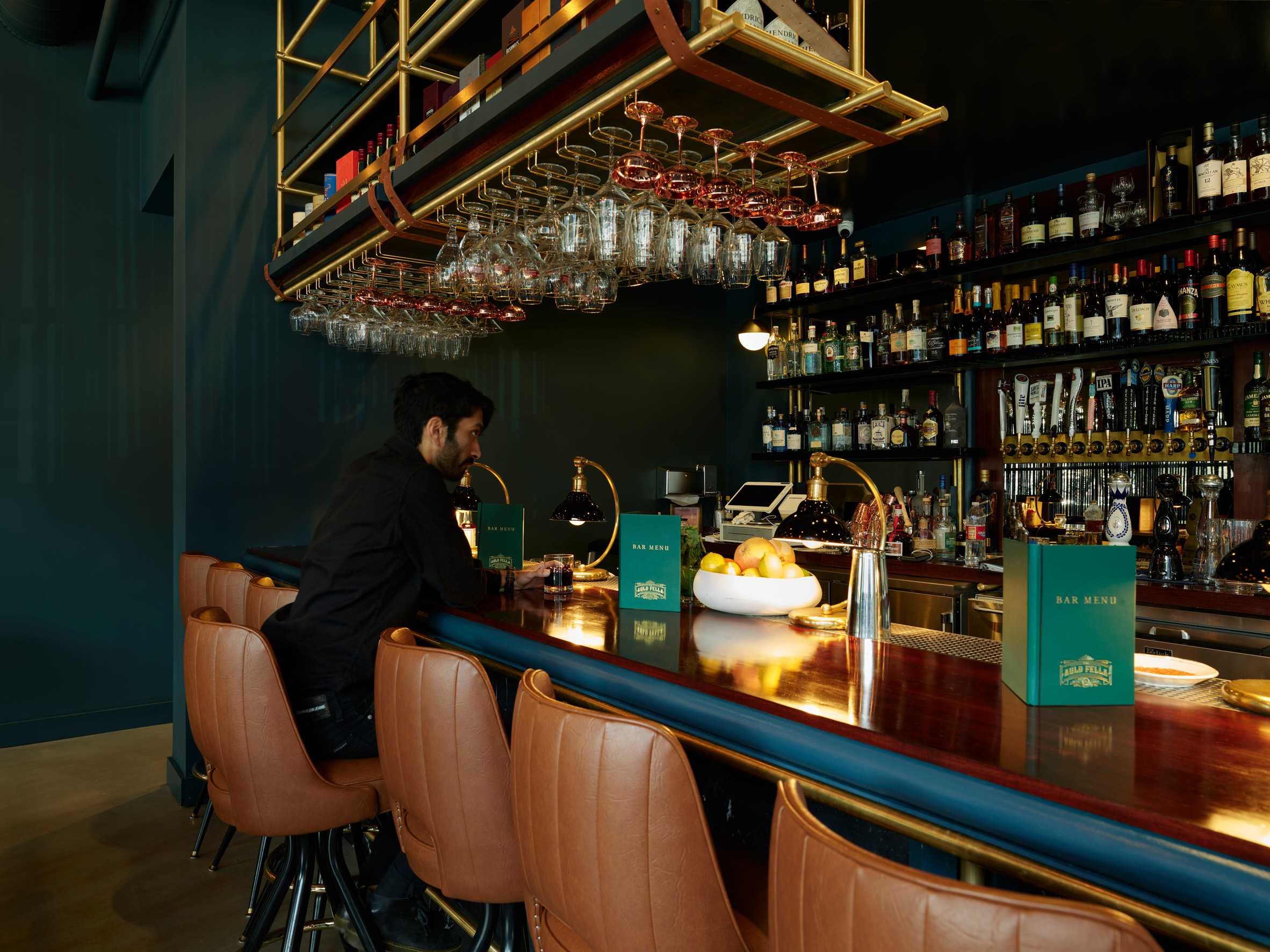 Four wall panels covered in a green plaid pattern provide a backdrop for a row of leather seating. Hanging in the centre of each panel above the banquettes is a black and white portrait in an oval-shaped gold frame. 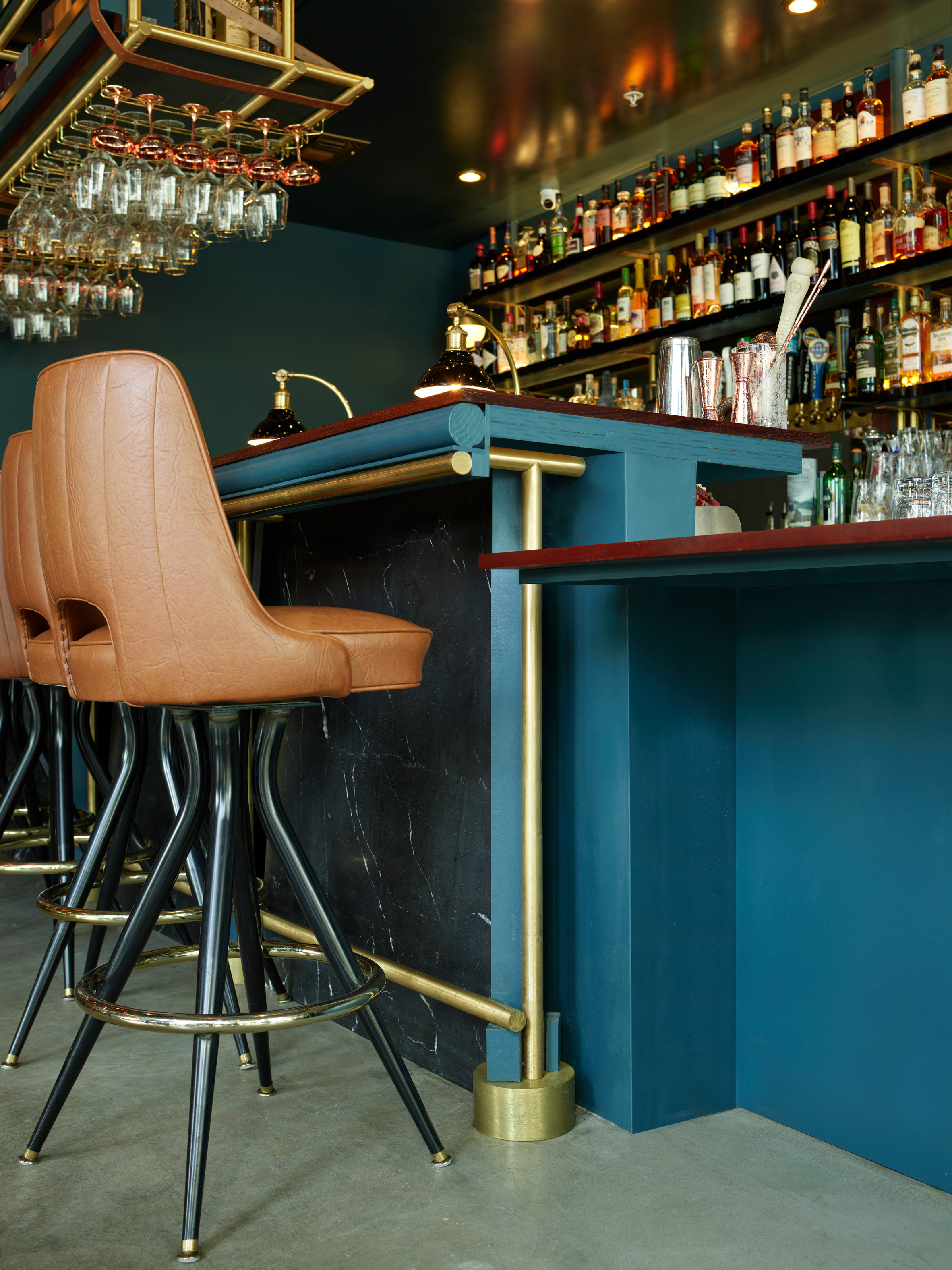 “Part of what makes an Irish bar authentic is the repetition of design tropes borrowed from famous, ancient precedents,” said The LADG co-founder and co-principal Claus Benjamin Freyinger.

Leather bar chairs run along the main bar, which is fronted by a slab of black and white quartz and has a woodwork frame painted a bluish-green colour. Several brass rods support the wooden counter and form a footrest along the bottom.

“The bar itself uses spindles to support the cantilevered countertop, acting like a miniature building with columns set in front of a wall surface and providing footrests for customers,” the architects added.

Decorative brass rods also hold up a communal table featuring quartz top and wooden legs in the centre of the 1500-square-foot (139-square-metre) restaurant and bar. 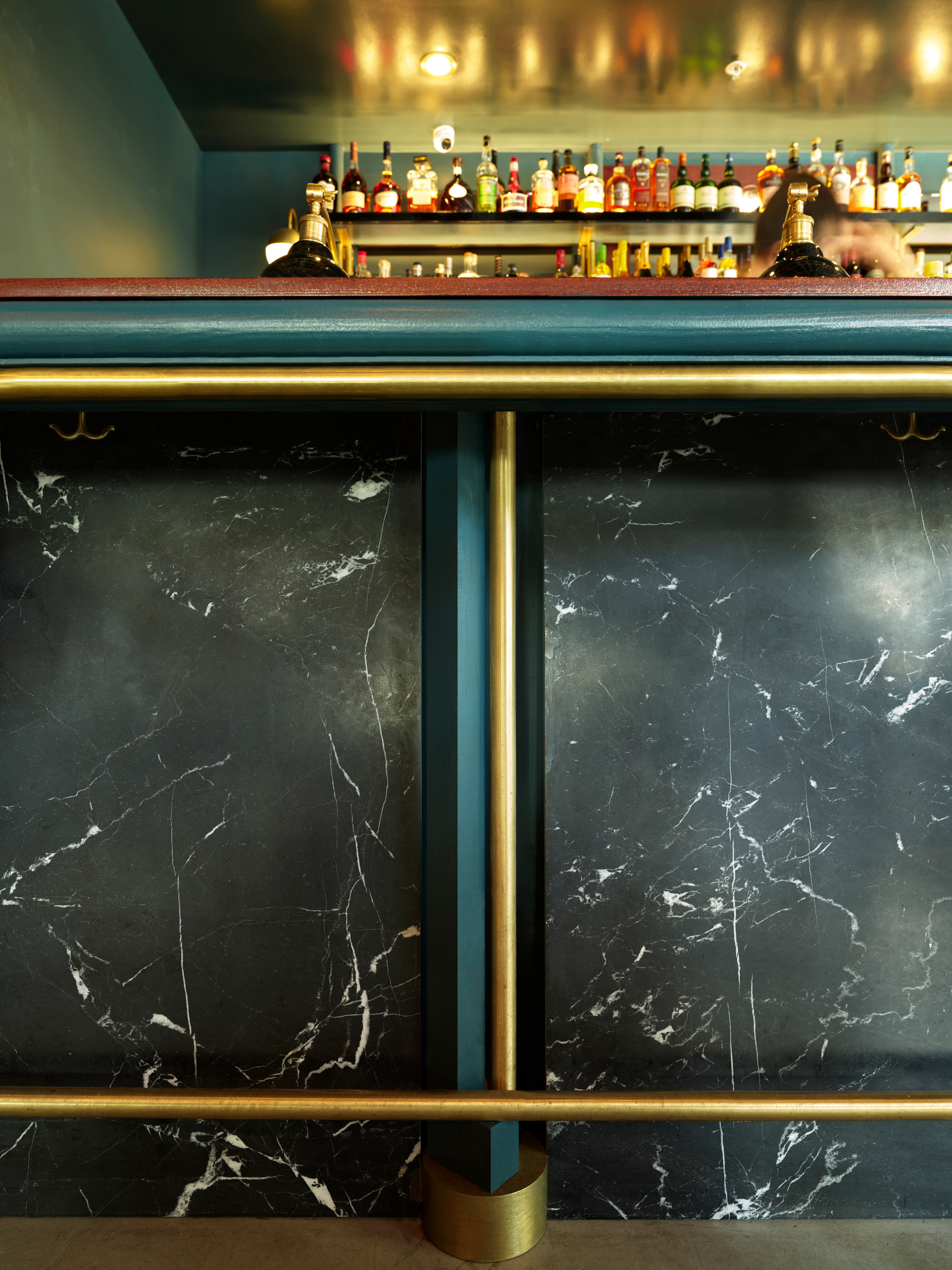 Mouldings that accent the bar surfaces and booth seating, shelving units and counters are made from wooden extrusions created in factories. The LADG chose to work with the stock fabricated shapes because of their flexible and fast design.

“The concept of assembly reflects the restaurant’s context of Culver City, which is a major hub in the Los Angeles film production scene,” it said. 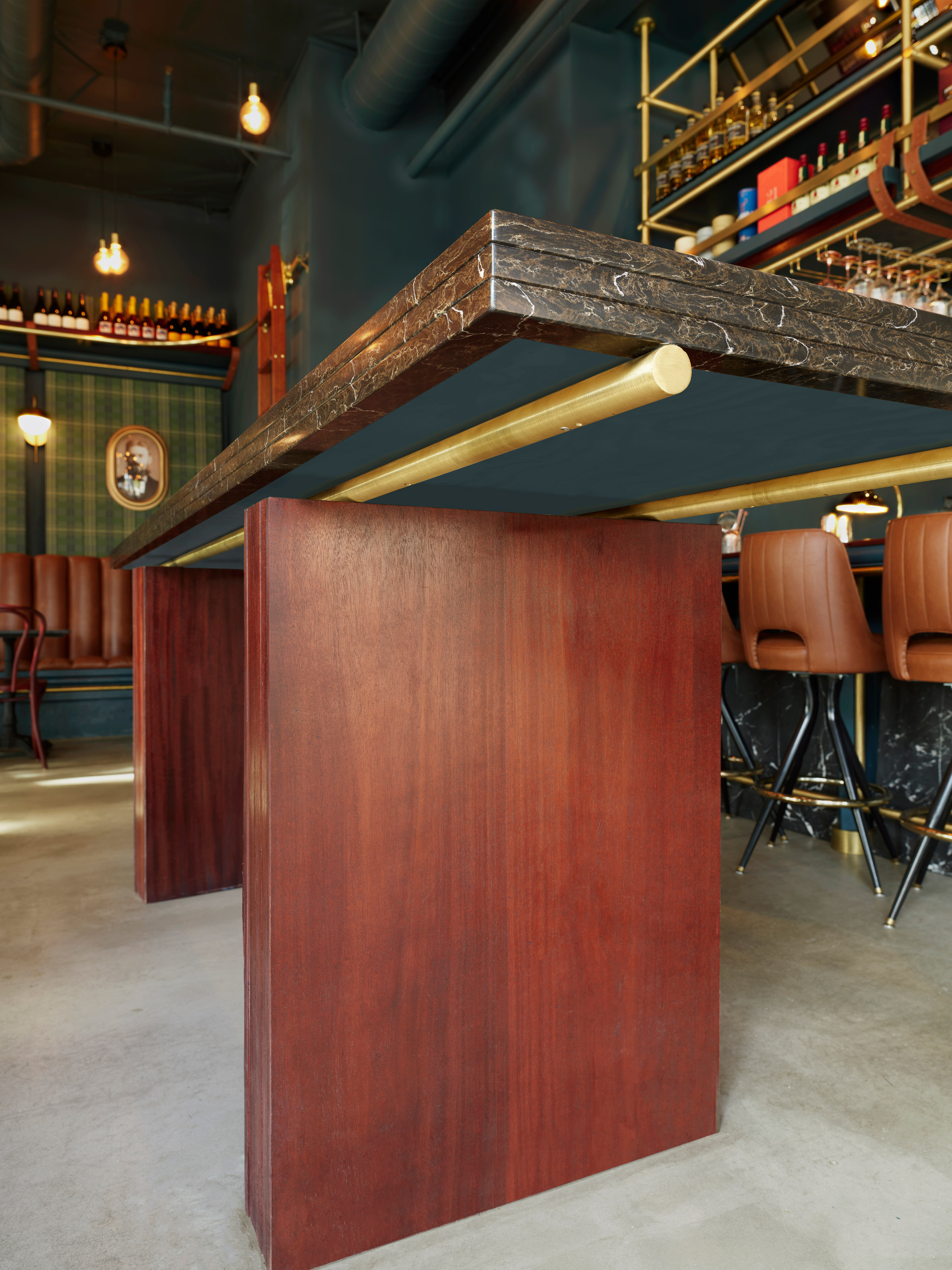 “This method of assembly defines Auld Fella’s overarching design sensibility, as though the bar is in-progress and could accept additions and adjustments at any time without disturbing its aesthetic order,” it added. 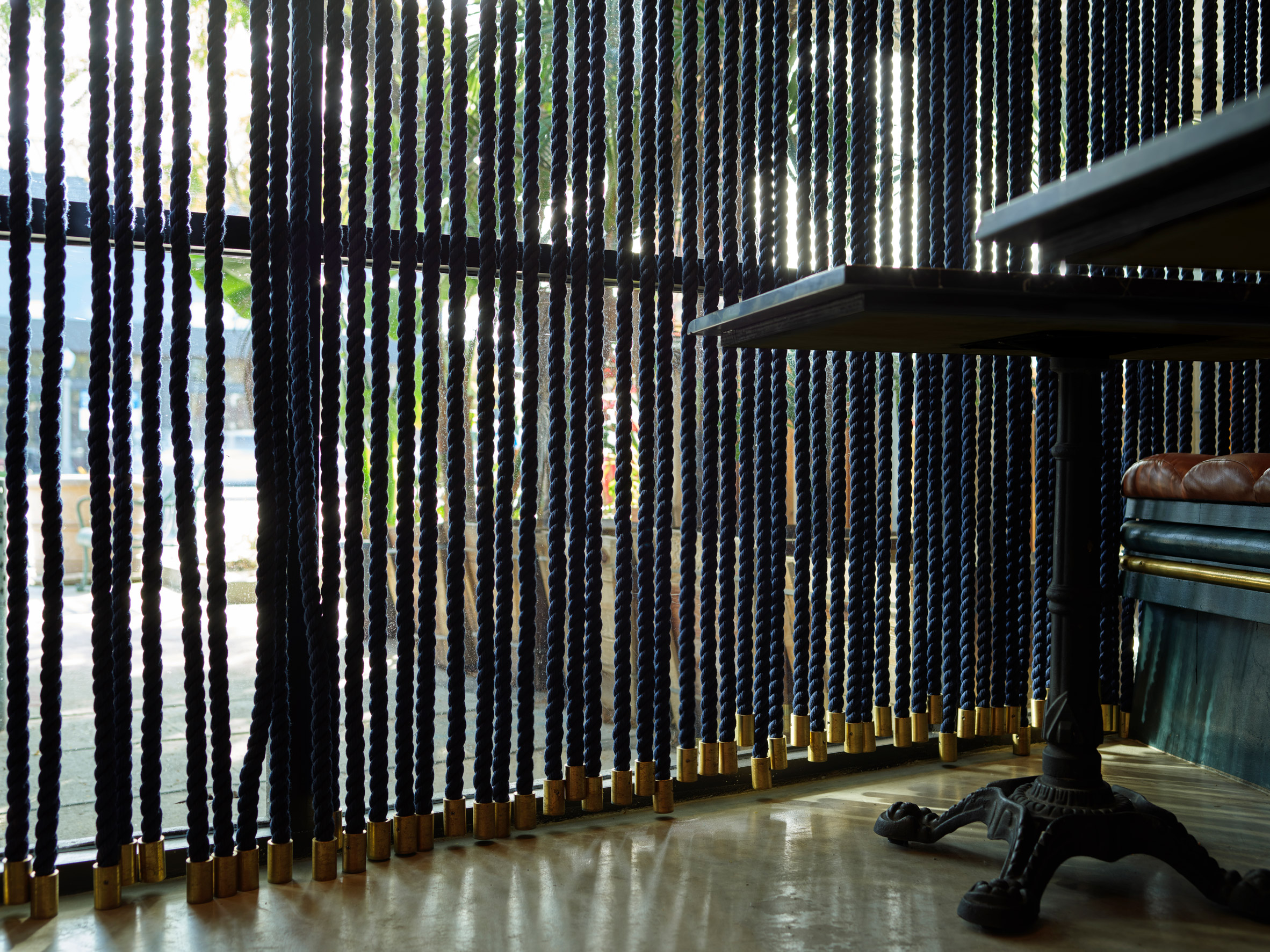 Other details of the design include a sliding wood ladder attached to a brass track, window curtains made from roping, leather straps that hold together the drapes and shelves, and hanging bulb light fixtures.

Founded in 2004, The Los Angeles Design Group is led by principals Claus Benjamin Freyinger and Andrew Holder, and has offices in Venice, California and Cambridge, Massachusetts. The studio previously worked on a conceptual concrete pavilion for the Coachella music festival. 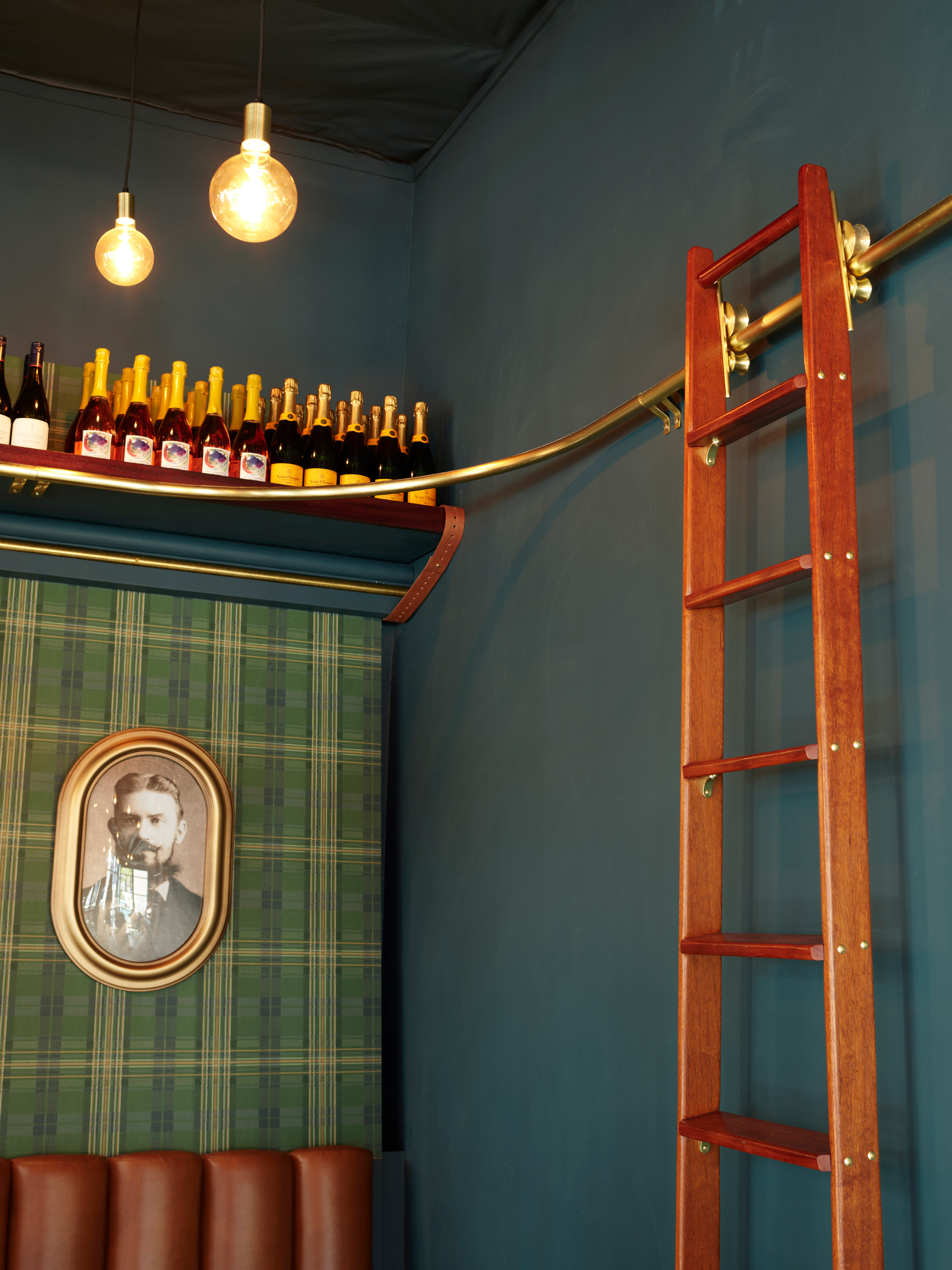 Other bars and restaurants in the Los Angeles area include a cocktail bar that references Viennese architecture and French films by Homes Studios and a Mexican restaurant that features terracotta and brick walls.

The post Culver City bar Auld Fella is influenced by the pubs of Dublin and Belfast appeared first on Dezeen.