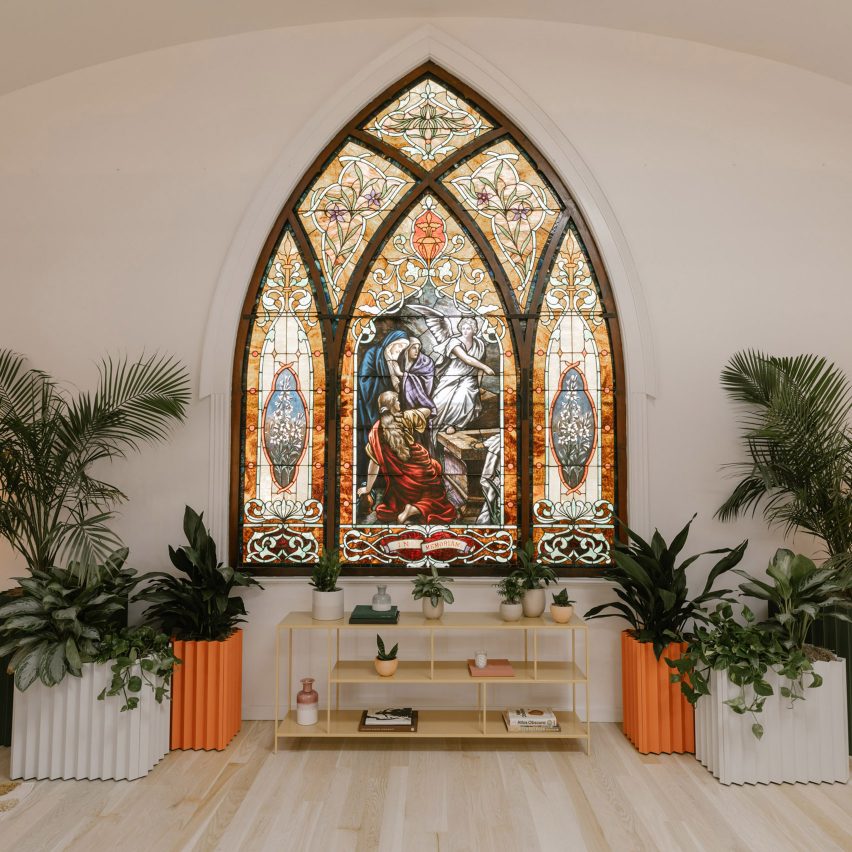 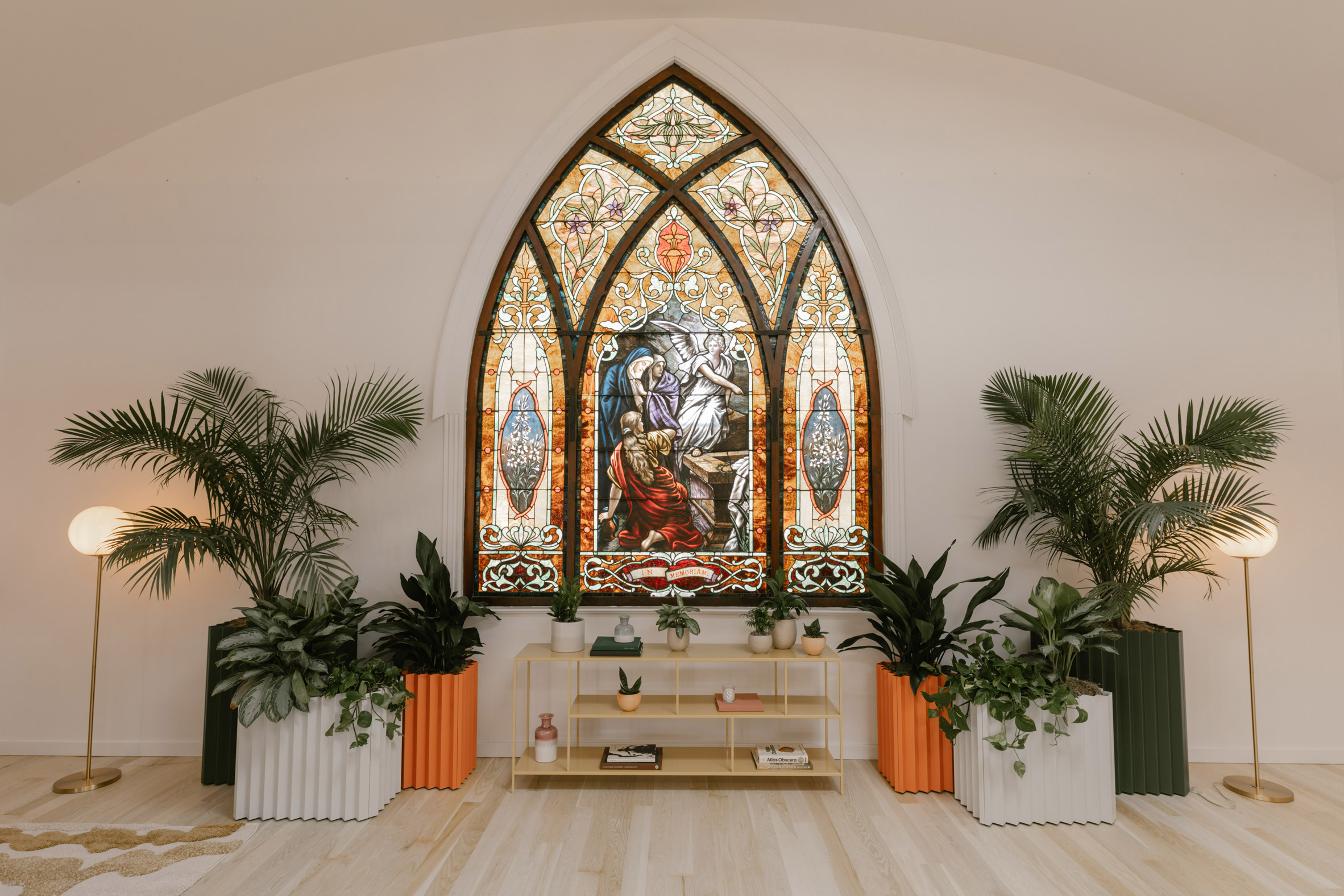 The Ruby Street venue occupies an Arts and Crafts-style building that was constructed in the late 19th century in LA’s Highland Park neighbourhood. The building has a storied past, having served as a civil rights meeting place and the home of a progressive church.

The property was purchased by creative couple Lourdes Hernandez and Zach Leigh, who set out to transform the former church into a venue for co-working and events such as dinner parties, performances, photoshoots and weddings. 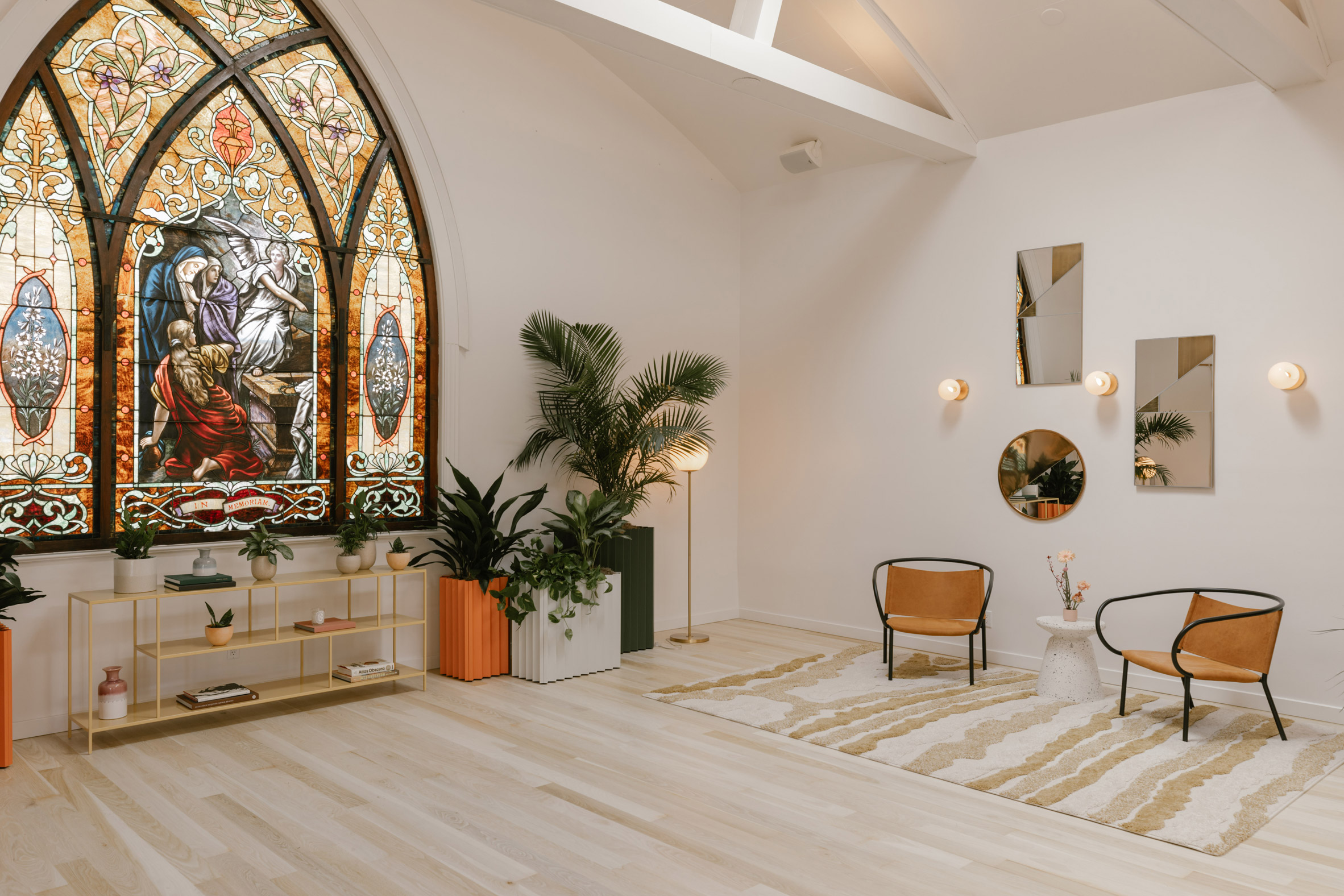 “Both musicians, Zack and Lourdes dreamt of owning a space where their fellow local creatives could come together to celebrate love, art and LA,” the team said.

The couple turned to interior designer Francesca de la Fuente and Working Holiday Studio – both based in LA – to freshen up the space. They also collaborated with graphic designer Daniel Barreto. 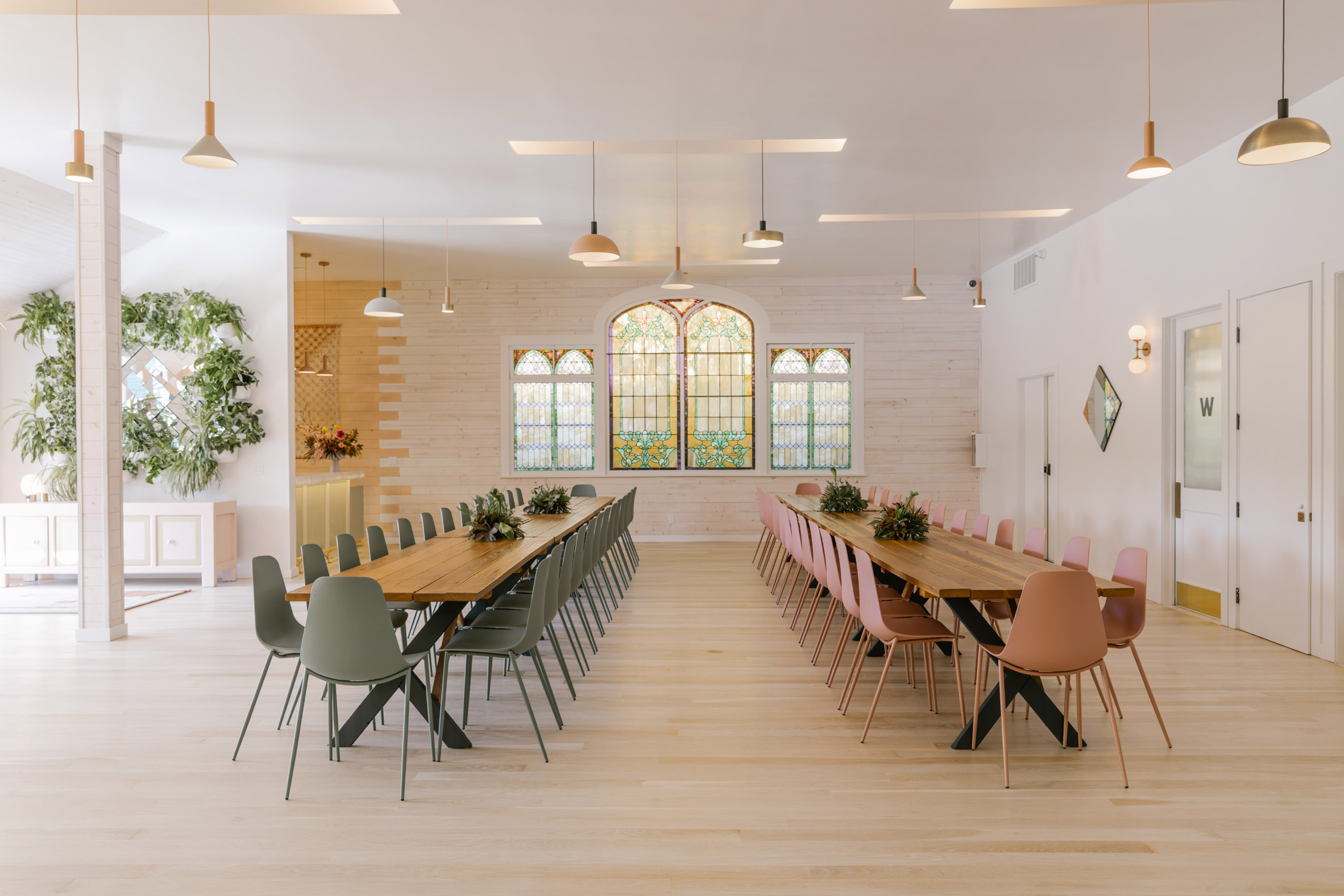 Roughly rectangular in plan, the building is one storey plus a basement and totals 4,000 square feet (372 square metres). The interior consists of two large, open rooms – referred to as the Reception Hall and Worship Hall – and two small spaces dubbed The Gallery and The Suite. 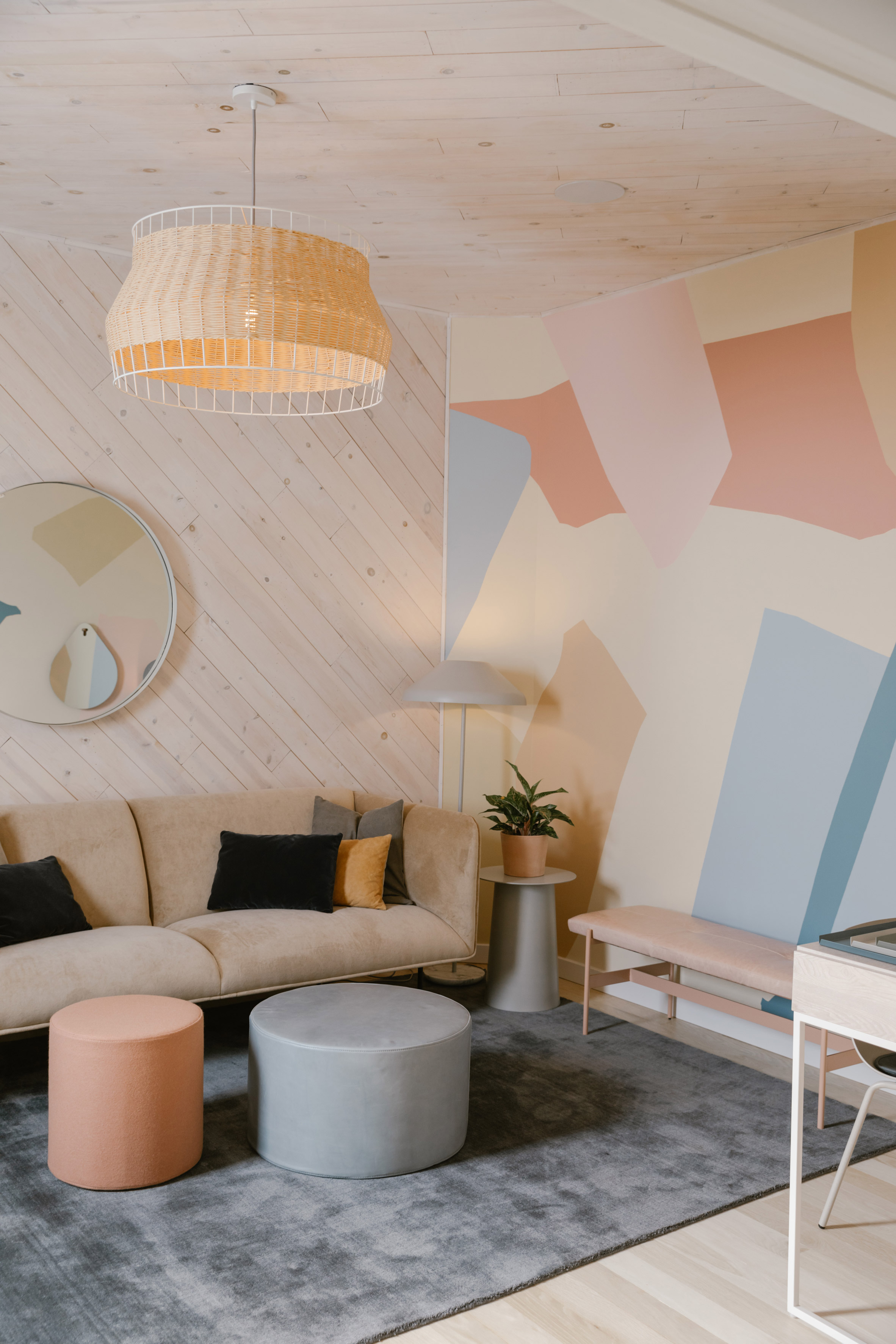 While updating the building for contemporary needs, the team sought to preserve original features such as exterior details and stained glass windows.

“The building’s original windows and craftsman facade have been carefully preserved, along with the church’s open-plan layout,” the team said.

New oak flooring and skylights were added, and the interior colour palette was updated. To furnish the space, the team partnered with a range of brands, including BluDot, Another Human, Menu and Bend Goods. Most of the pieces are available for sale through the Ruby Street website.

“The team has partnered with brands and creators from Los Angeles and Europe whose work combines function with sculptural and artistic design,” the team said. 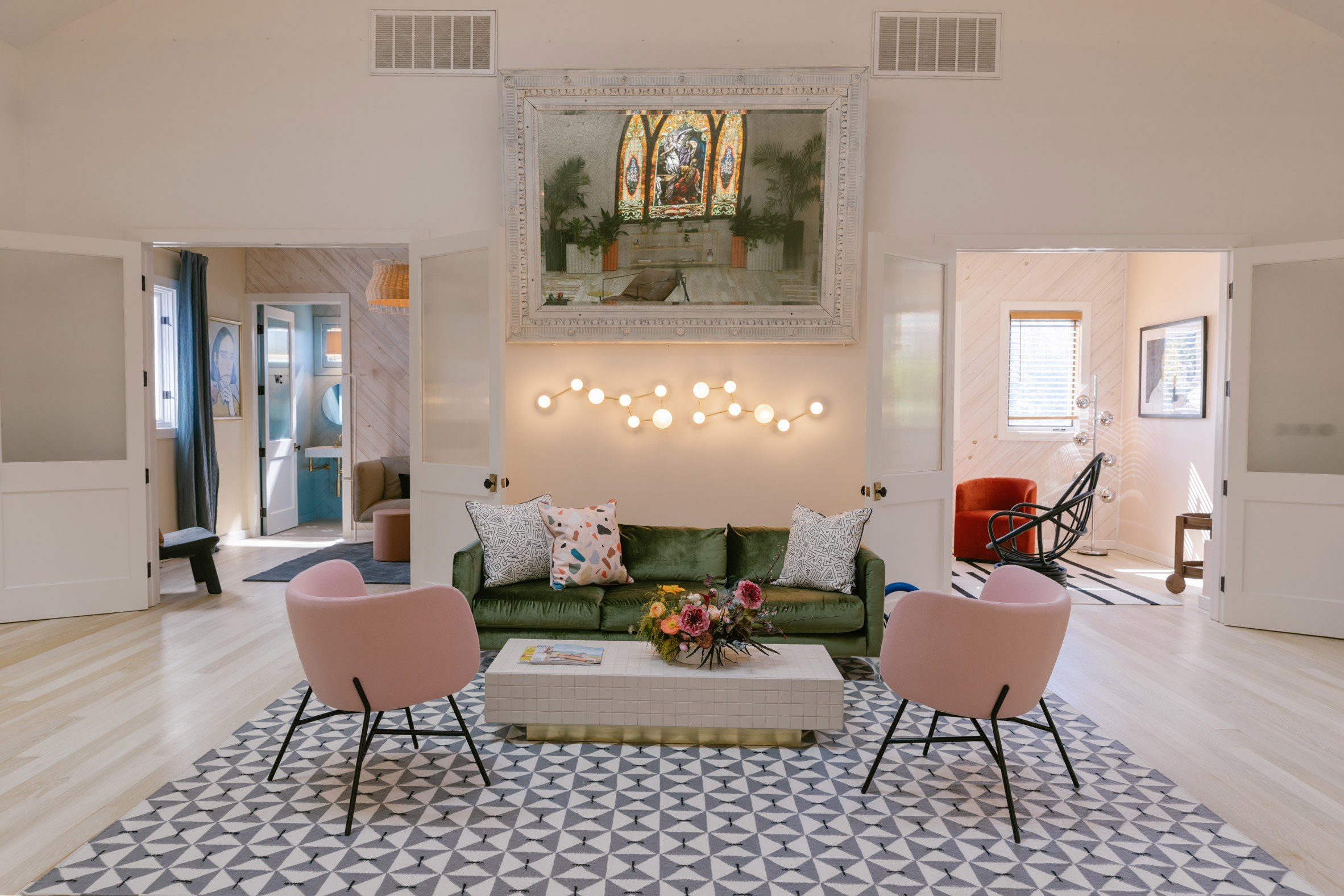 The Reception Hall is fitted with long, custom wooden tables and sage- and rose-coloured chairs from Article. Suspended overhead are pendants by Ferm Living.

Just off the hall is a vestibule with a vintage, refinished sideboard and a large mirror surrounded by lush vegetation. The vertical planting system is from the Missouri company WallyGro. 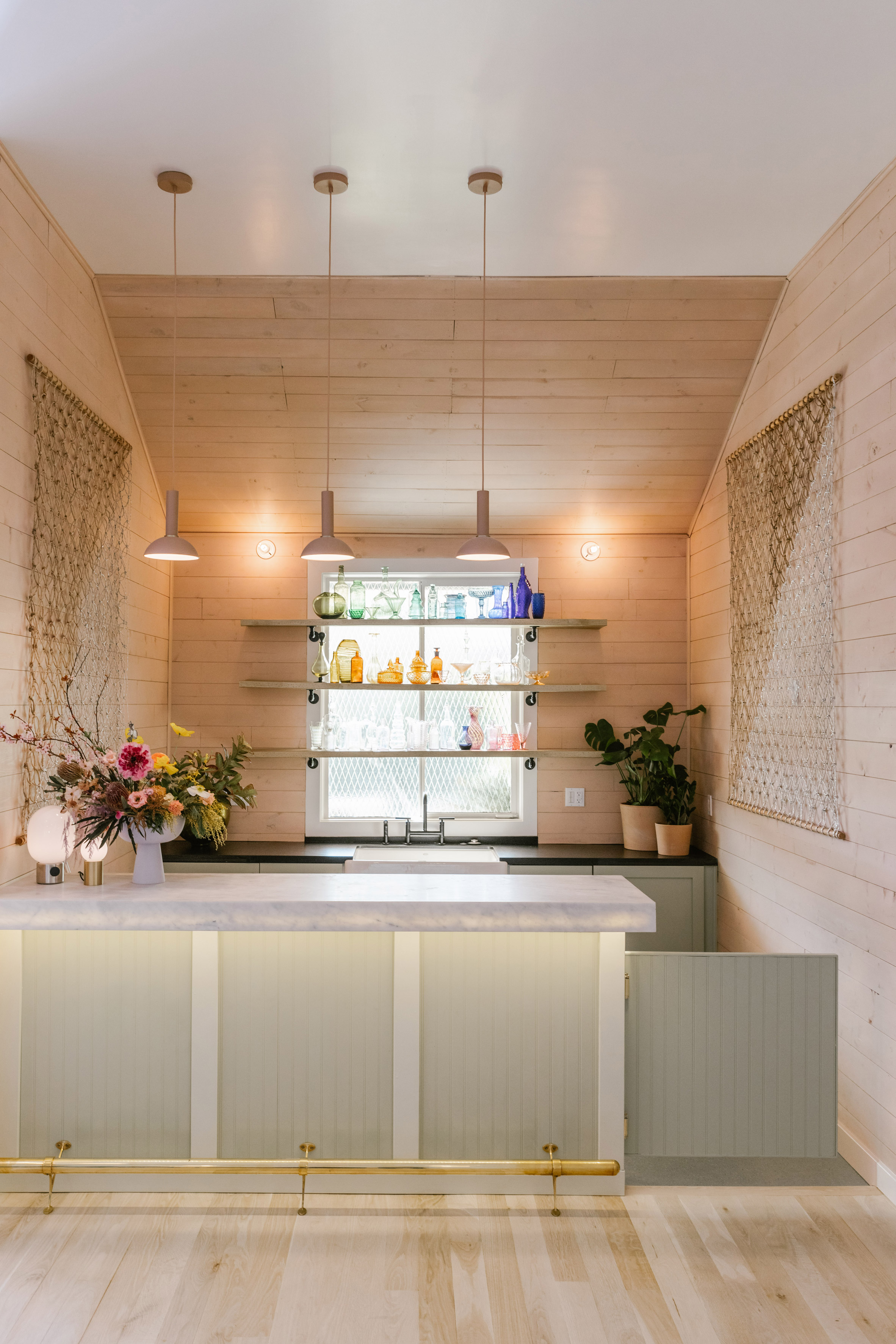 In the Worship Hall, the team created several seating areas. One holds a curved, vintage sofa with orange upholstery and leather armchairs from Croft House. Hanging on the walls are light fixtures, mirrors and macrame.

Another seating area is adorned with a velvet green sofa from Urban Outfitters, pink chairs from Hightower, and a wood-and-tile coffee table by designer Nima Abili. Affixed to the wall is a lighting fixture from CB2, and stretching underfoot is a grey-and-cream rug with a geometric pattern. 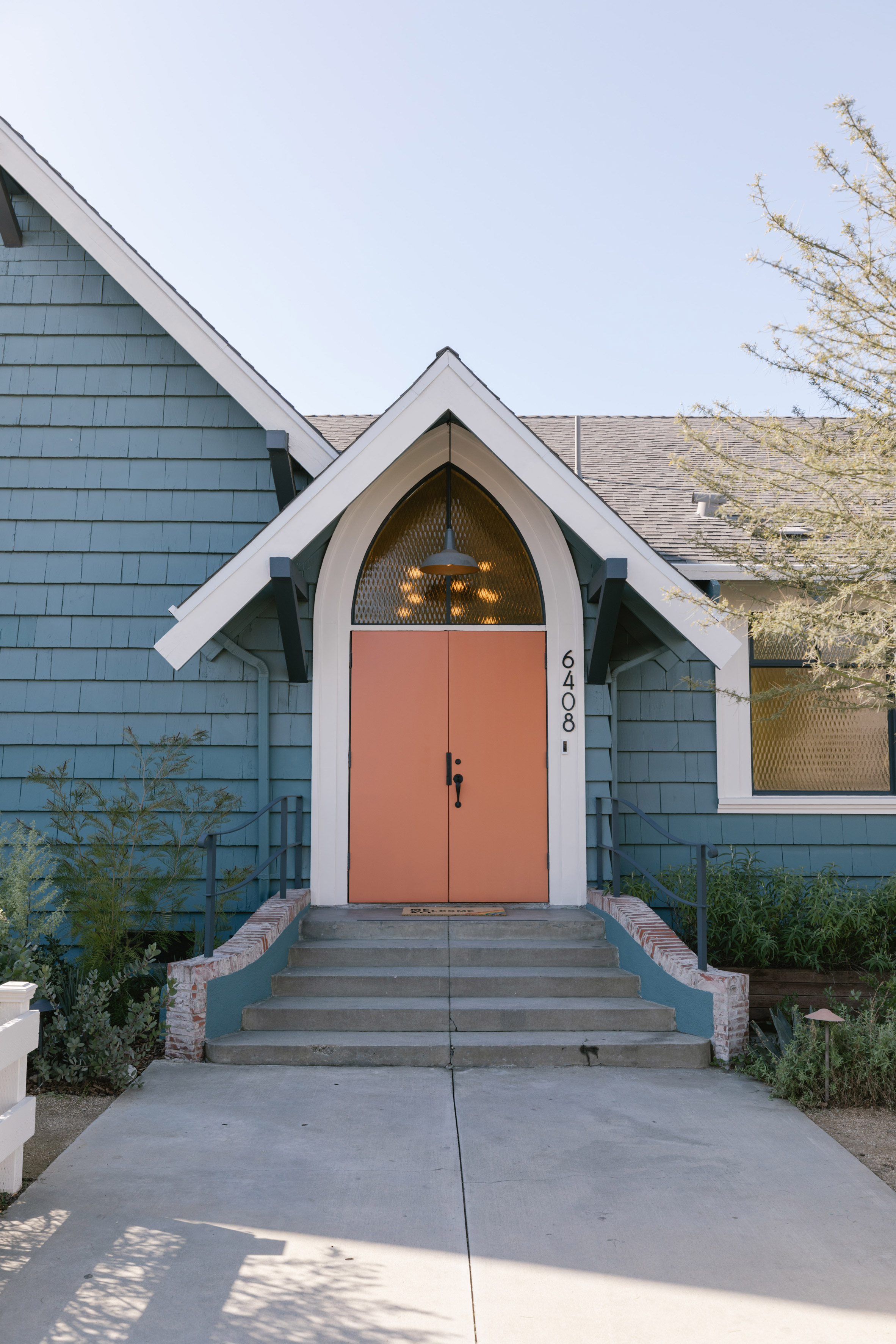 One of the smaller rooms has a tan couch, pouffes and a BluDot light fixture made of rattan and steel wire. On the wall is an abstract mural by the local artist Dakota Solt of Form + Color.

The team also redesigned the outdoor spaces by integrating seating into a wide staircase that steps down to a lawn, where the owners plan to host film screenings and communal meals. 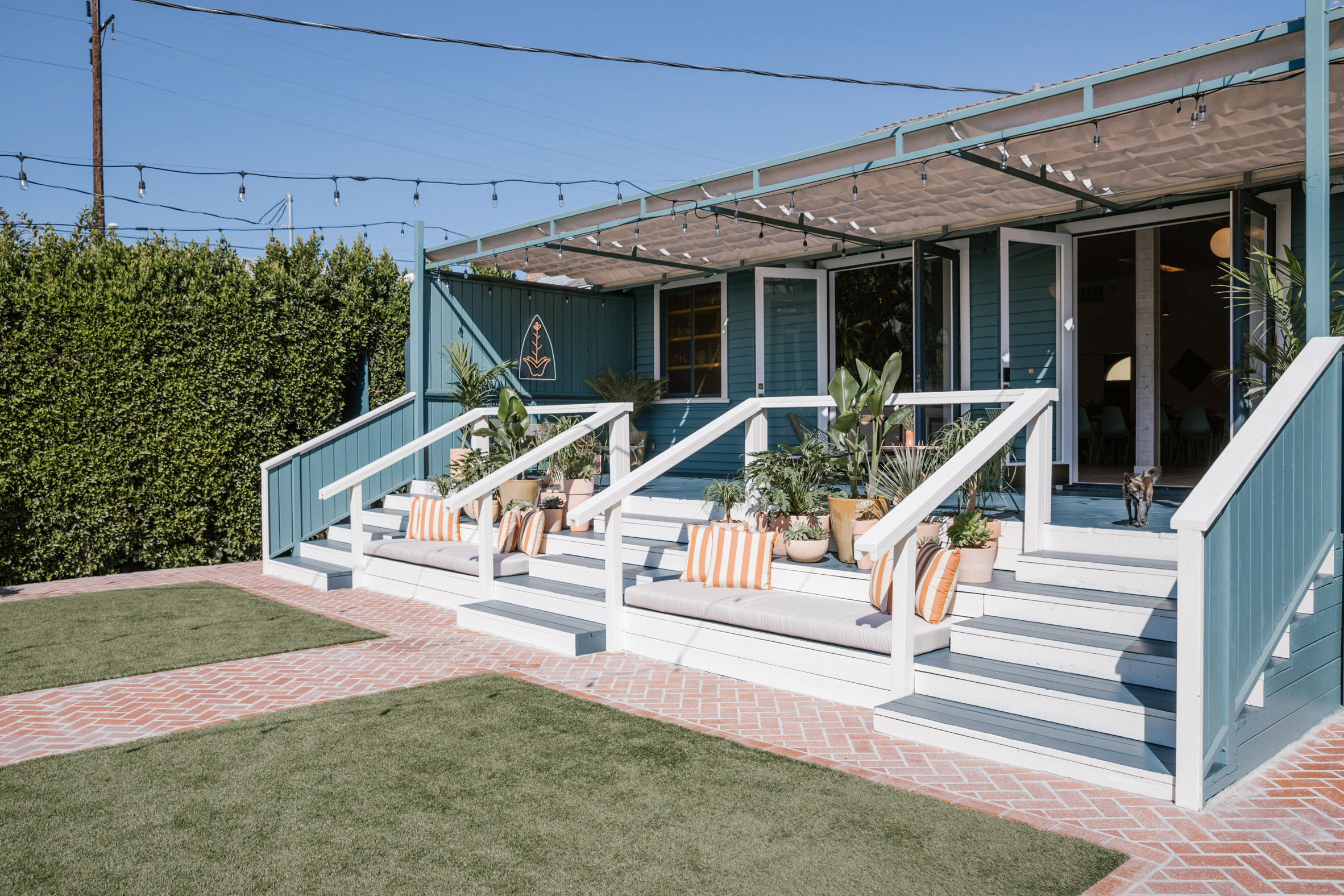 Los Angeles has seen the conversion of historic buildings into contemporary work and event spaces. In the downtown district, an early 1900s warehouse was converted into an outpost for Soho House, and a floor within the 1890s Bradbury Building is the latest location for NeueHouse.

Photography is by Cándida Wohlgemuth.