The attic – which was previously just used for storage – is set within a young family’s home in Kasterlee, a municipality that’s 45 minutes drive from central Antwerp.

Local studio Van Staeyen Interieur Architecten was asked to turn the attic into a multi-functional space.

The clients wanted the space to serve as a guest room for visitors, and a social area where the family’s daughters can spend time with their friends as they get older. 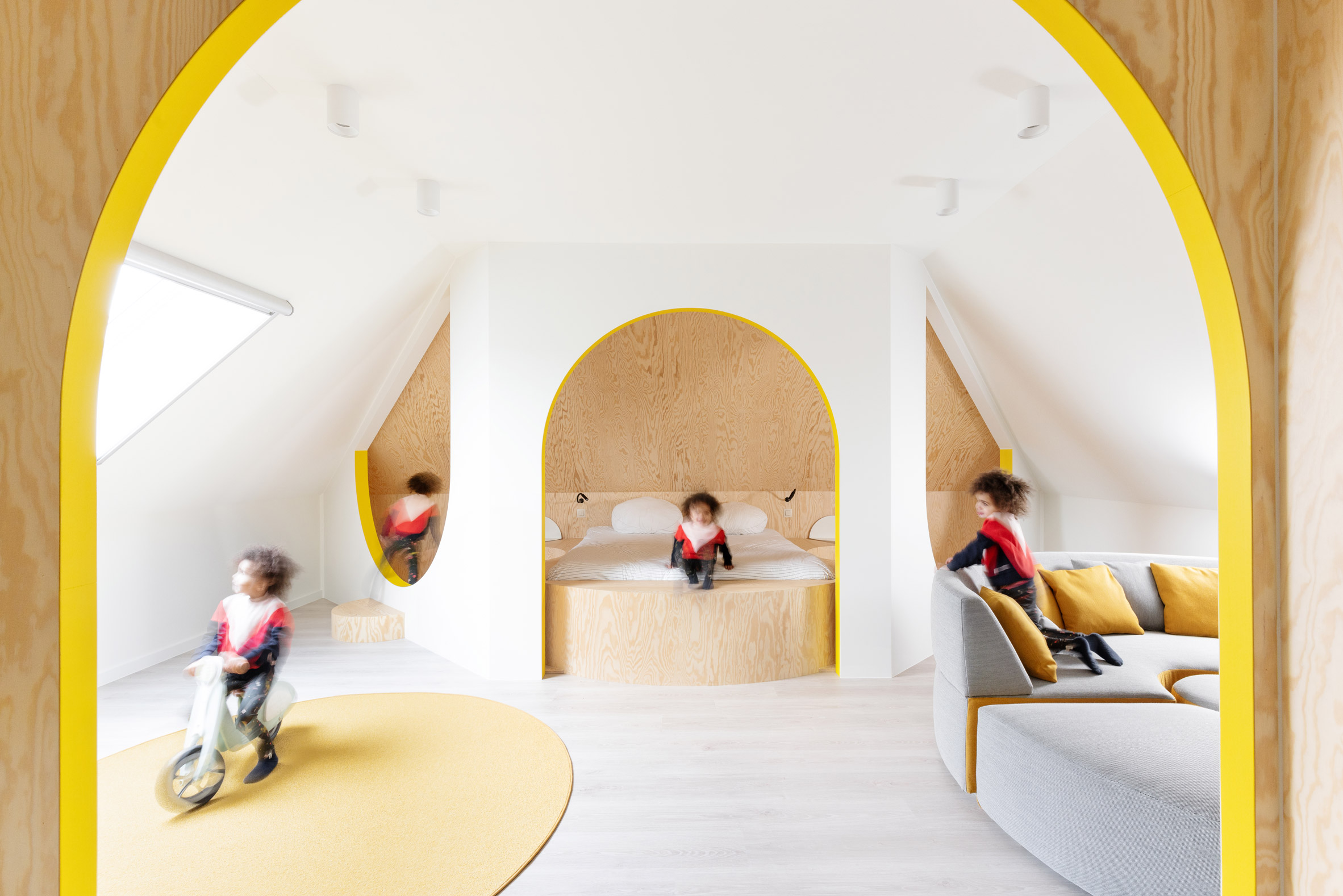 “The attic can be used as a studio, a room to rent, a place to watch tv, count the stars, listen to music, chill with friends, get carried away on a romantic night,” Johan Van Staeyen, founder of the studio, told Dezeen.

“Everything is available to sleep, cook, shower, and hang out.” 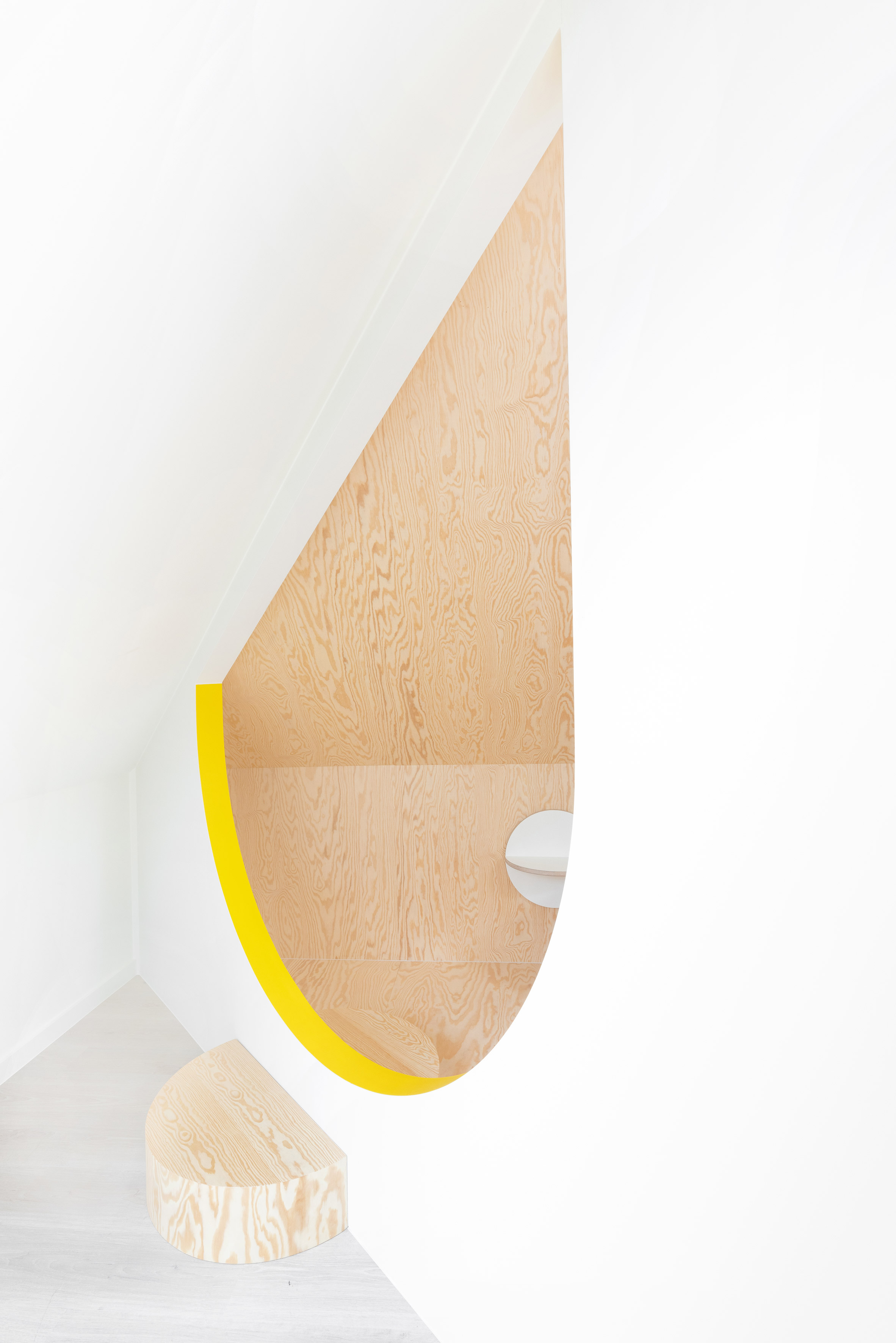 Tucked under the pitched roof with two sloping walls, the attic has been divided into a bedroom, living room and bathroom.

A spruce-clad bedroom with a circular built-in bed is located at the far end of the space, separated from the living room by a curved partition clad in white laminated sheet material. 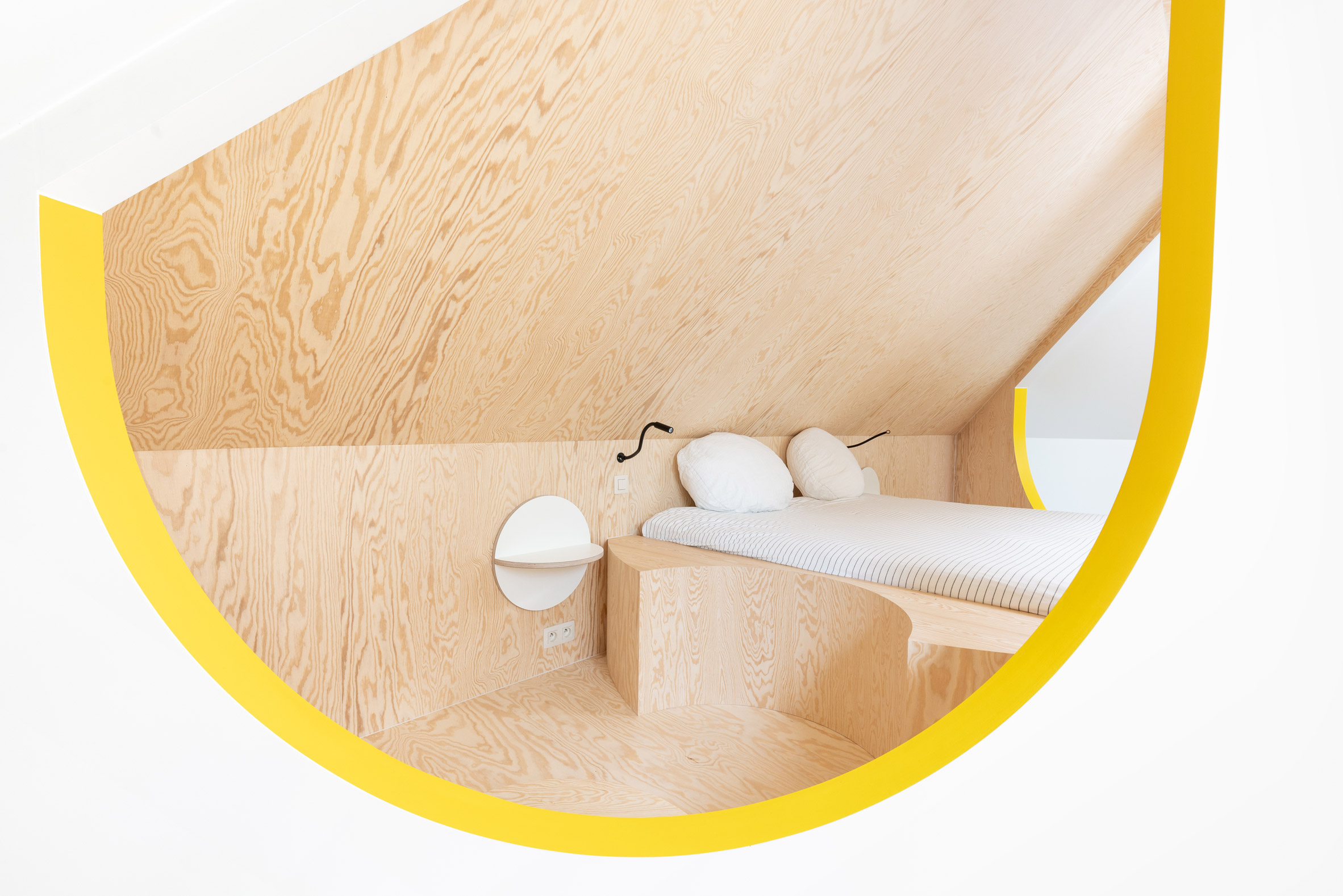 It’s punctuated with three large U-shaped portals, one of which is an entrance and the other two are window-like openings. They have each been bordered with sunshine-yellow paint.

“Yellow stands for optimism and energy,” said Van Staeyen of the colour choice. “It makes you more active and stimulates mental activity.” 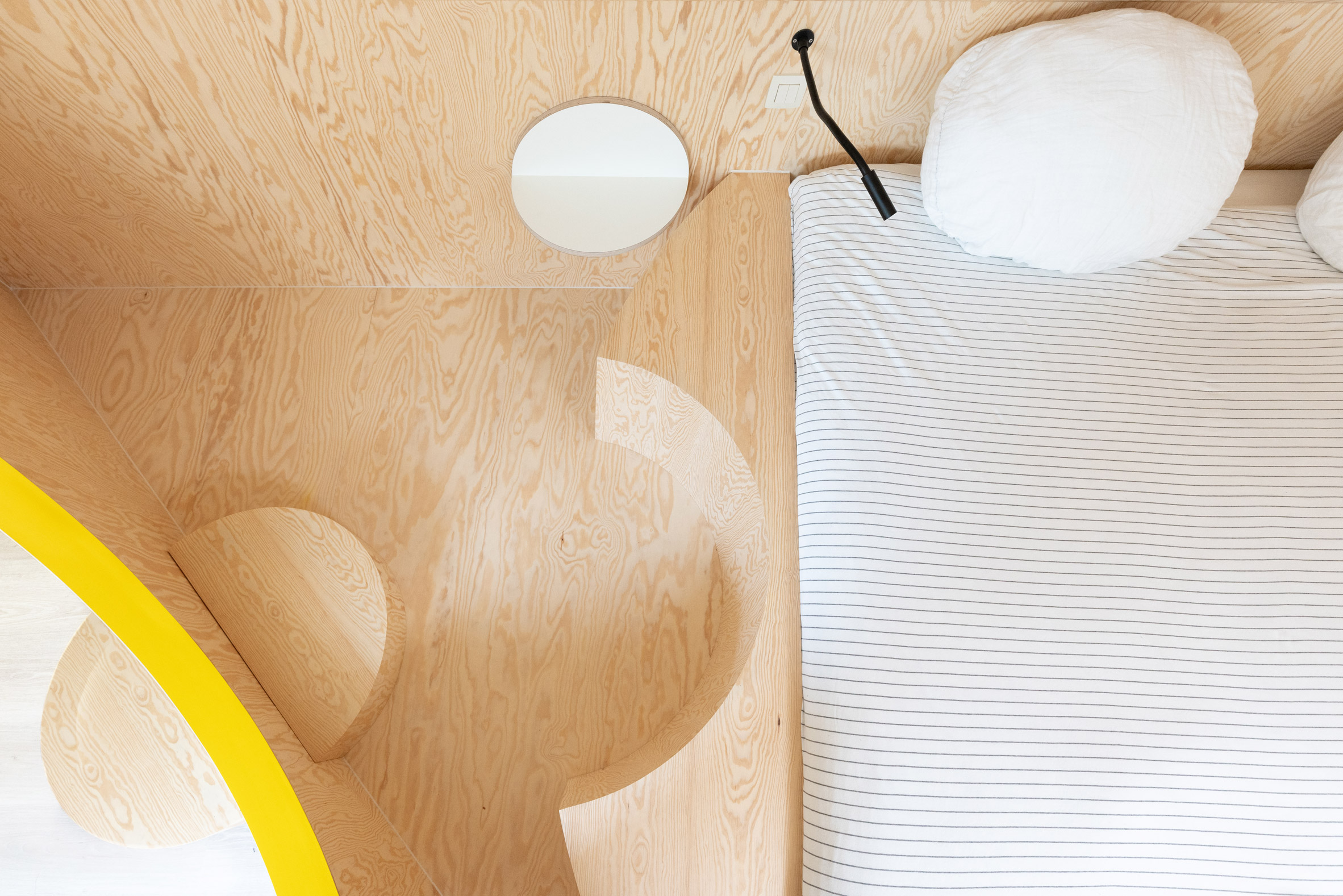 The living room, lit by two skylights, is a bright space with white-painted walls and pale timber flooring.

A bespoke circular sofa upholstered in powder-grey and ochre fabric occupies one side of the room, while a yellow circular rug is on the other.

The sofa can be split into three parts: a curved semi-circular sofa, a U-shaped bench seat and a small circular ottoman which slots into the centre. 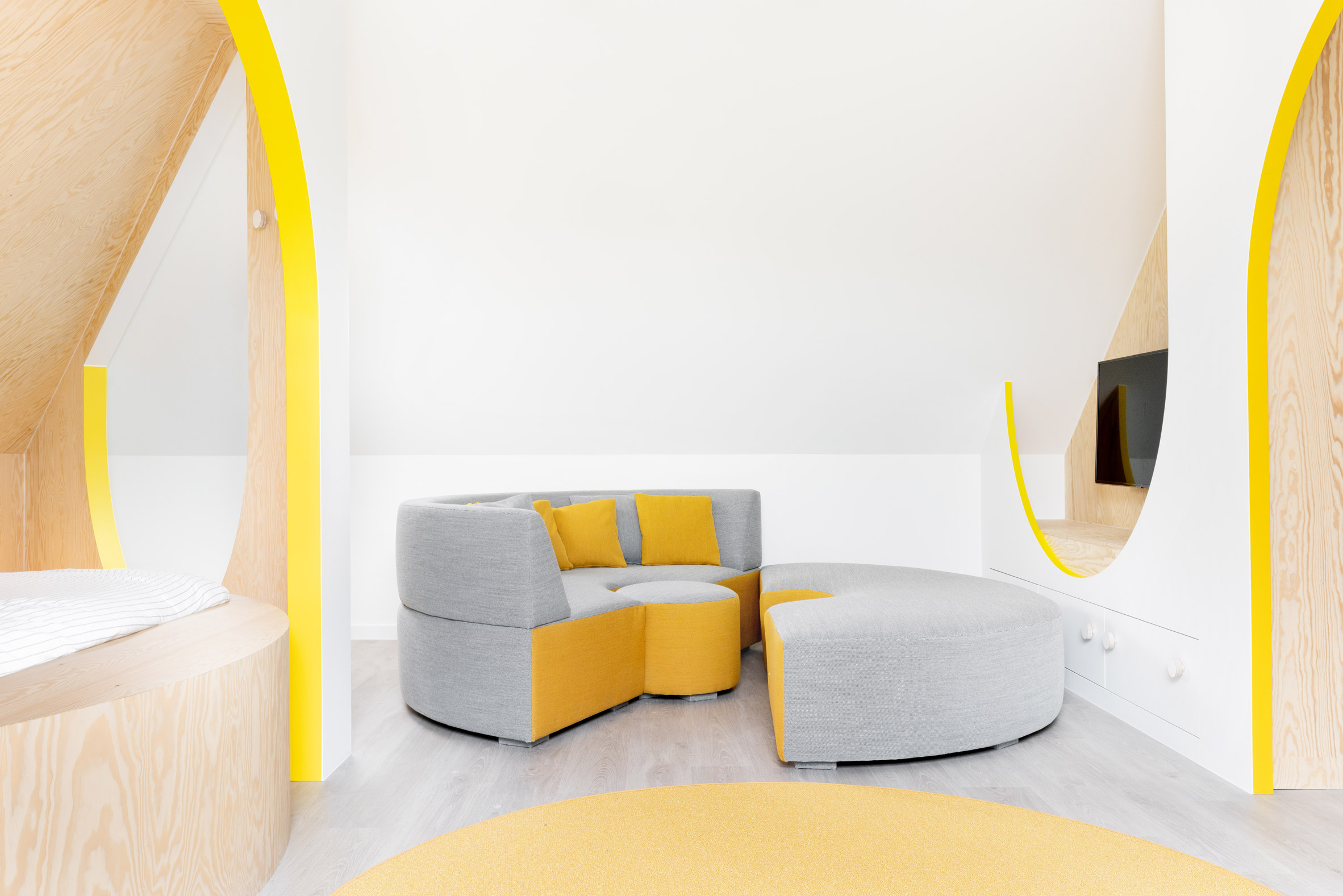 Mirroring the bedroom space, U-shaped openings have been cut into the living area’s rear wall to form two recesses – one frames a television and the other is used for shelving.

The bathroom is located behind the shelves and a small storage area is behind a door next to it. 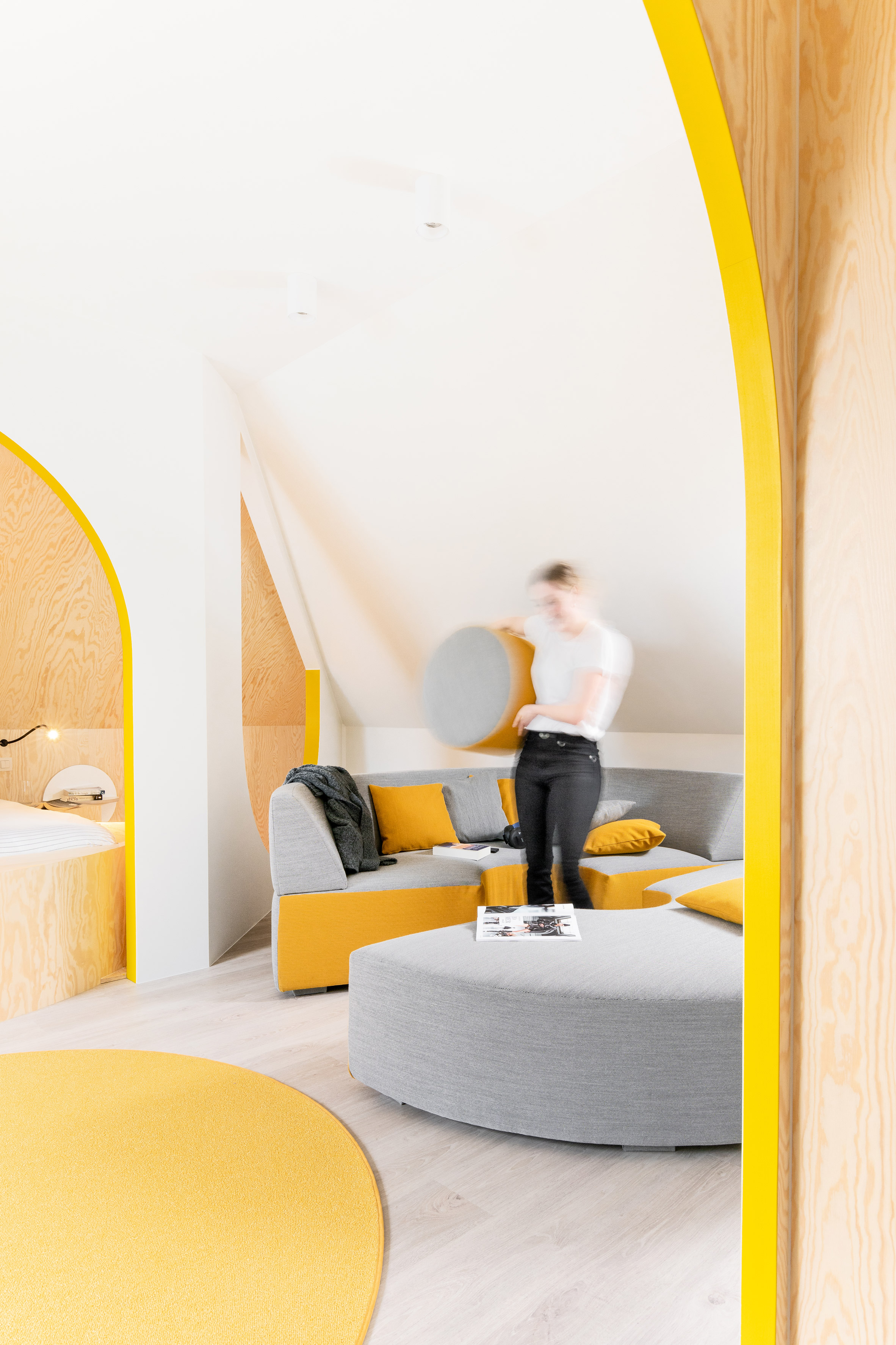 The studio has described the overall aesthetic of the space as “relaxing geometry”.

“Curved lines do generate a more relaxed feeling than straight lines,” said Van Staeyen. “The yin and yang sign, the infinity-sign, the treble clef are good examples of symbols with curved lines.”

“Animals with round heads and ears also create a certain attractiveness, charm or loveliness because of their roundness.

“Relaxing geometry is curve-inspired – it enlarges and softens the space, and gives it a more welcoming feeling.” 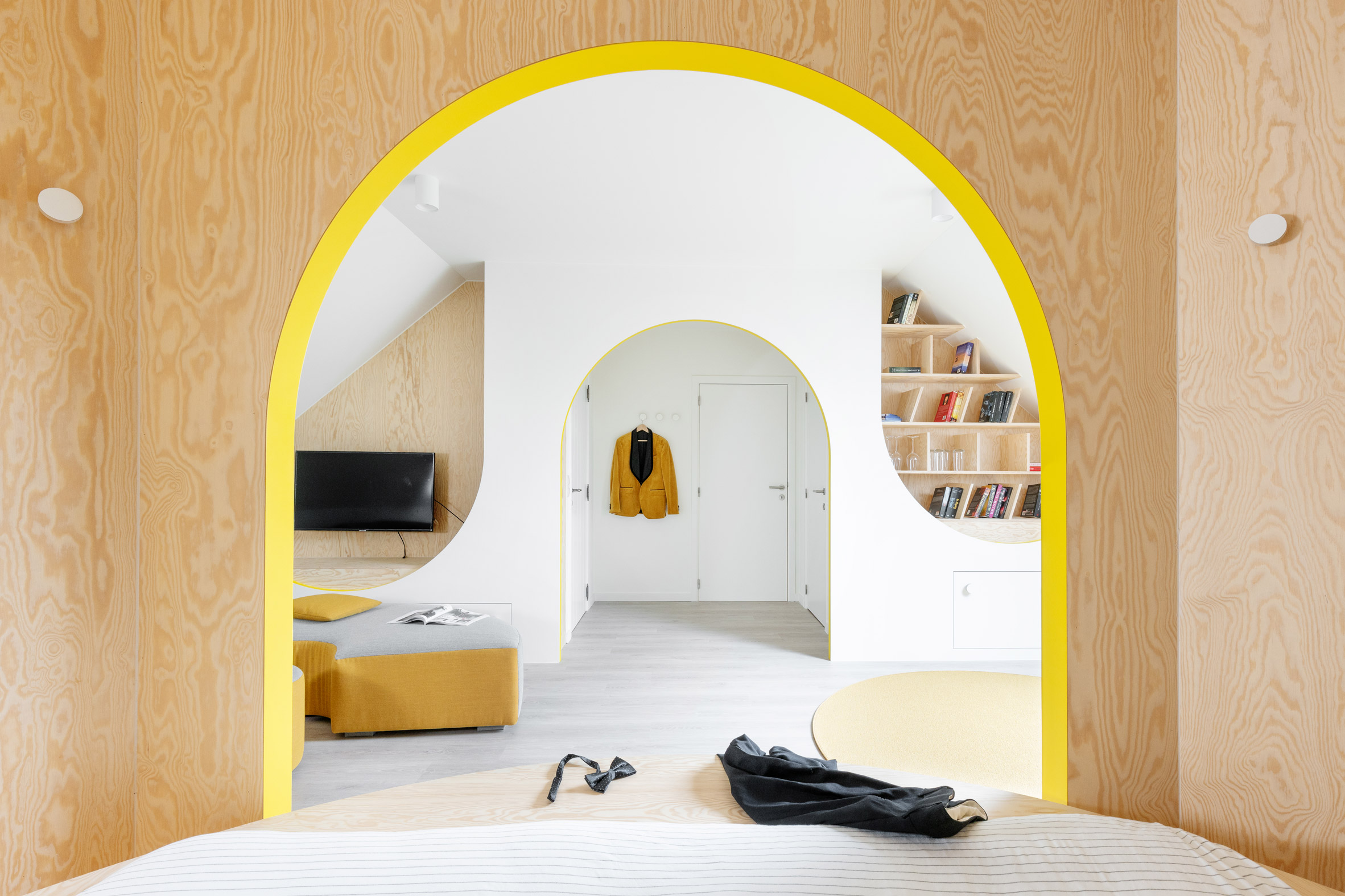 Van Staeyen Interieur Architecten is based in Antwerp’s Markgrave neighbourhood and is led by Johan van Staeyen and Wim Clissen. Recent work includes the renovation of a townhouse, which the studio updated with block-colour surfaces and built-in furniture.

In 2018, the studio also transformed a chapel in a medieval cathedral into a gothic-inspired cafe.

The project went on to win the civic and cultural interior of the year category in the inaugural Dezeen Awards, where judges praised it for its “simple, playful and clever” design.

Photography is by Jochen Verghote.