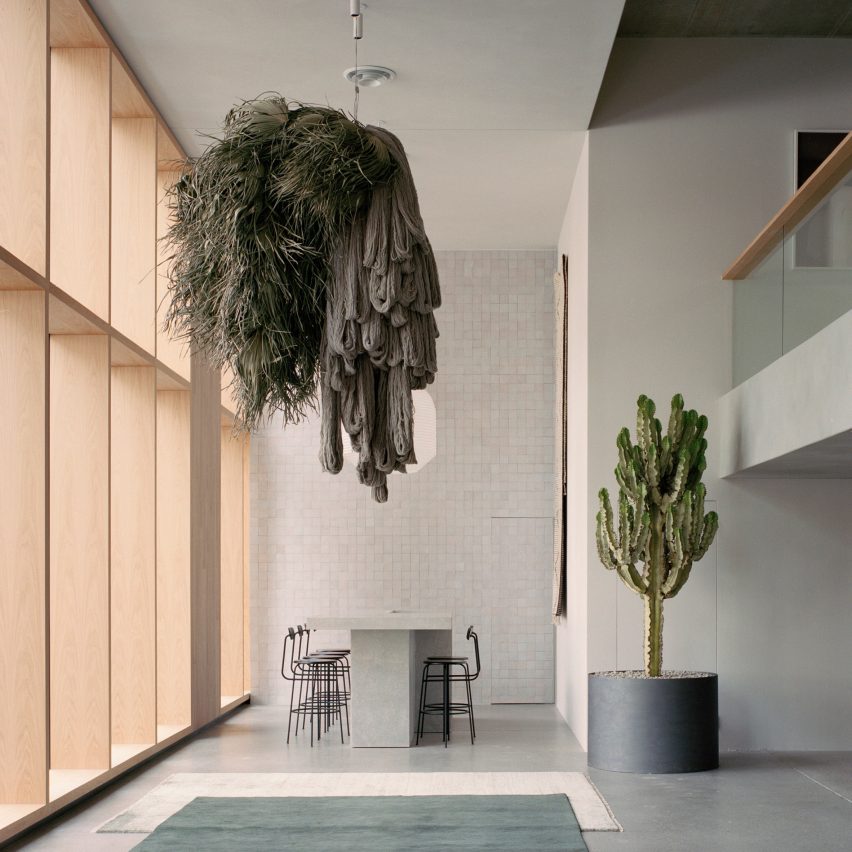 Concrete, plaster and tiled surfaces offer a neutral backdrop to the pieces on display in this pared-back rug showroom in Sydney, Australia, designed by Studio Goss.

Armadillo & Co is situated in the trendy neighbourhood of Surry Hills and is the third showroom that the Los Angeles-based luxury rug brand has opened in Australia.

As the existing spaces in Melbourne and Brisbane are trade-focused and largely visited by industry professionals, the brand’s founders wanted the new Sydney location to offer a more personal retail experience. 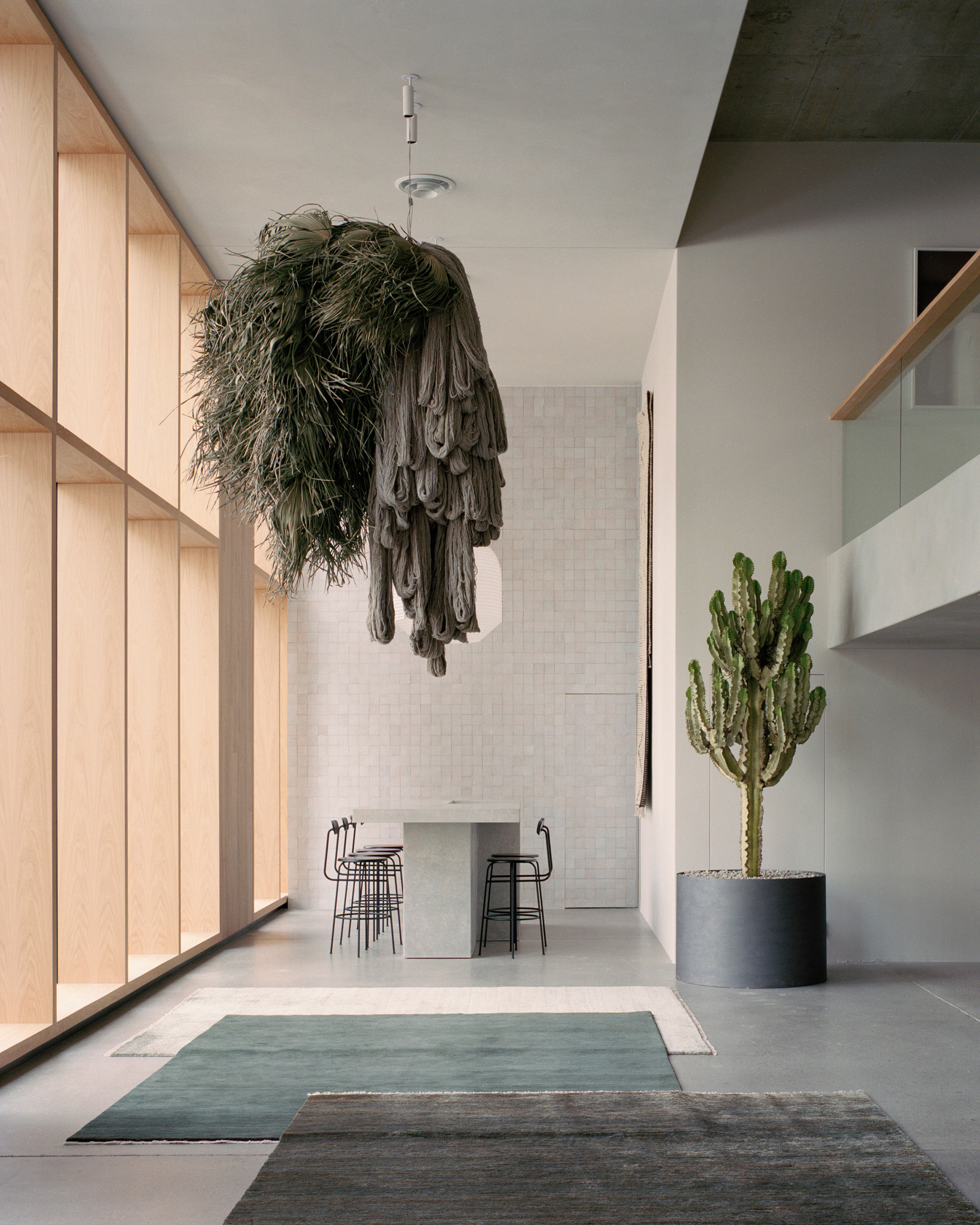 Studio Goss was brought on board to overhaul the interiors of the showroom building. Its previous occupants had left behind a “distracting” fit-out that featured metallic and reflective surfaces.

“When we first saw the space it was dramatic but a bit disjointed and visually messy, so our initial focus was on paring things back to bring a sense of clarity to the internal volumes,” studio founder David Goss told Dezeen.

“We were really intent on introducing some quieter surfaces to harness and better highlight this magical, ephemeral quality.” 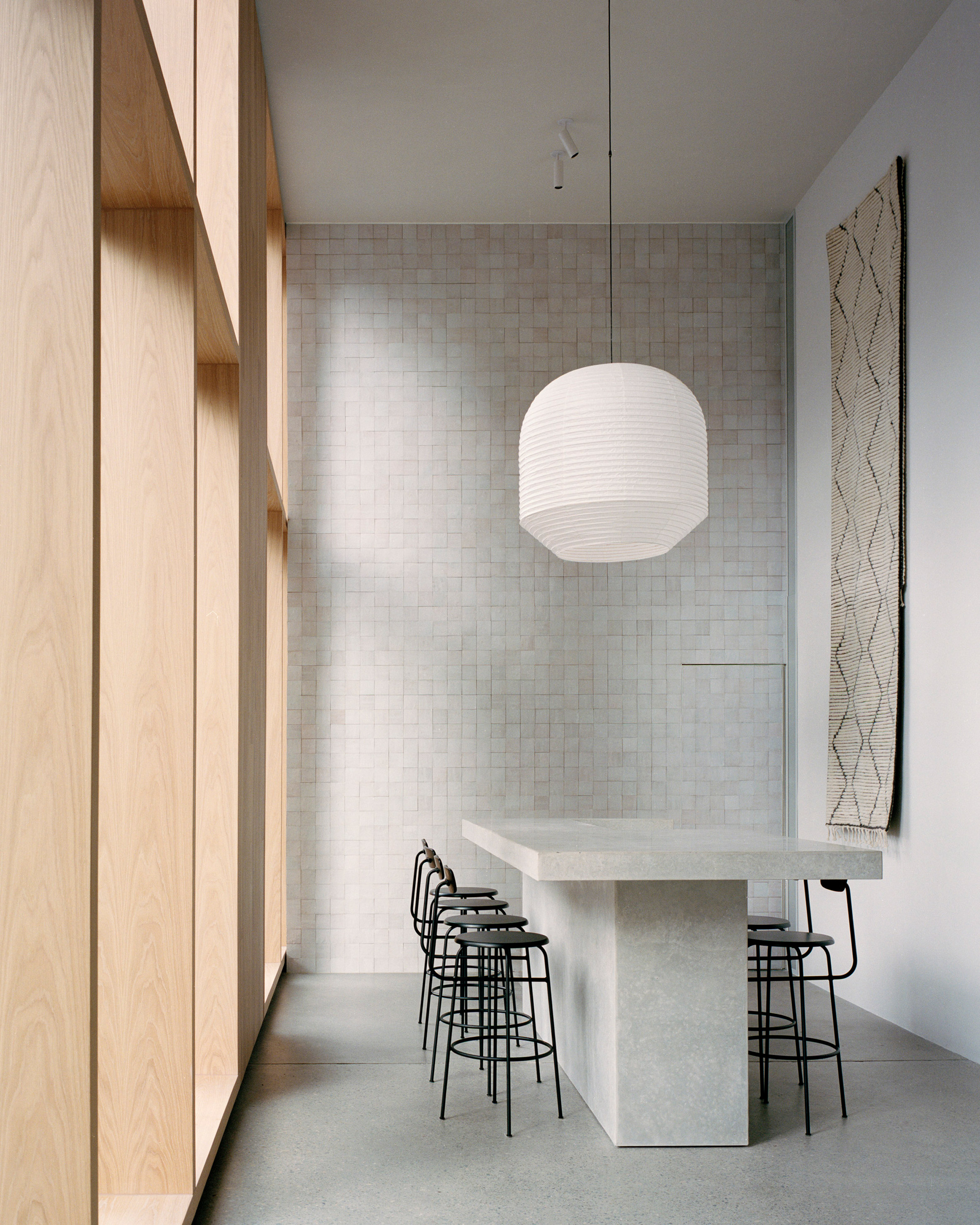 The studio first tore away the building’s existing flooring to reveal the concrete slab underneath.

A majority of the surrounding walls have been washed in grey plaster or clad in mottled, off-white tiles – simple surfaces against which the sun can cast shadows throughout the day. 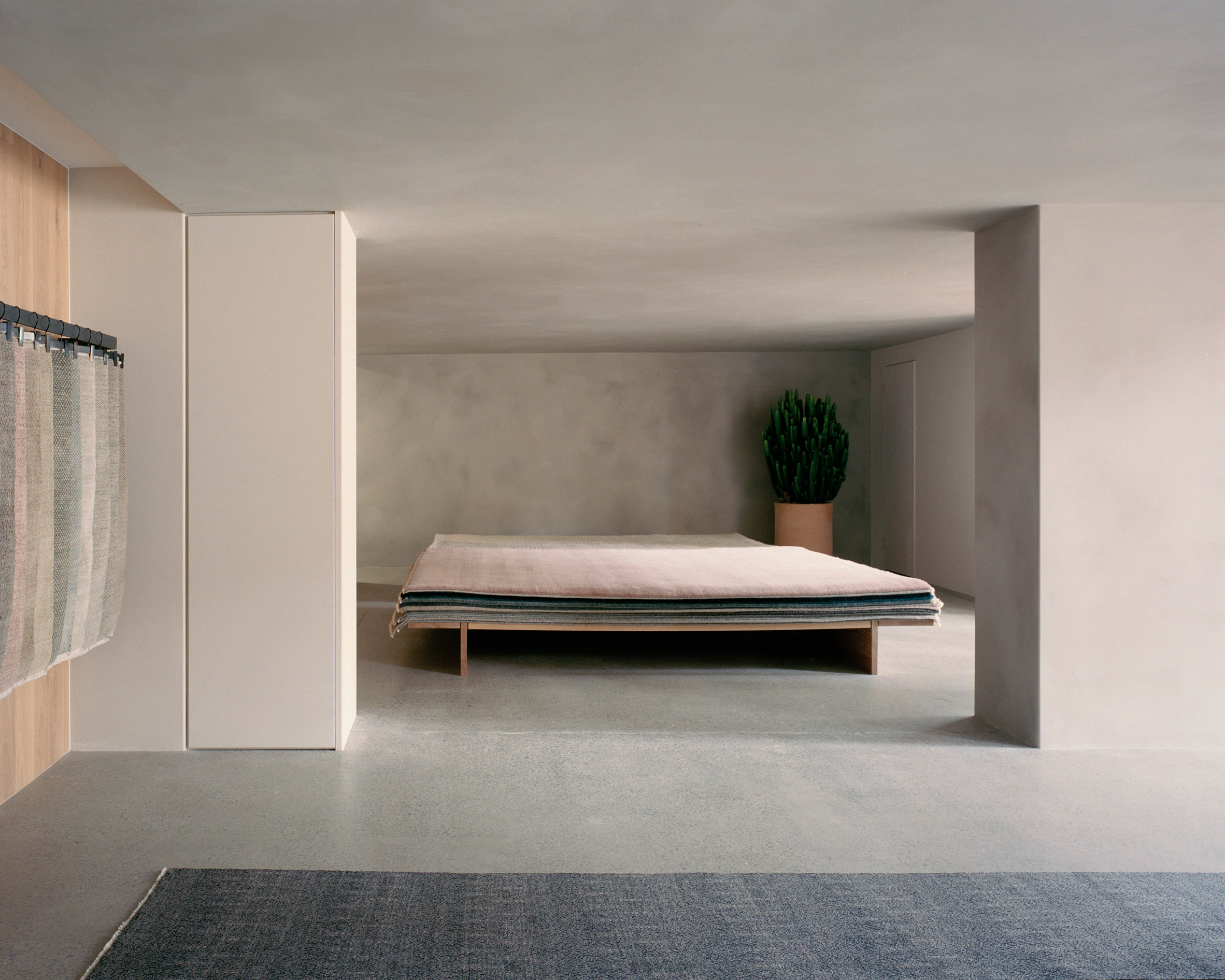 “One of the initial sources of inspiration came when we first visited the space and noticed the shadow-play and light quality that transforms the interior as the afternoon sun creates silhouettes of the street trees, projected them deep into the space,” explained Goss.

“Some of the references also included the strong architectural forms of Le Corbusier’s Chandigarh, the gently textured surfaces of Vincent Van Duysen‘s C Penthouse and the incredible balance of form in John Pawson and Claudio Silvestrin‘s Neuendorf House.” 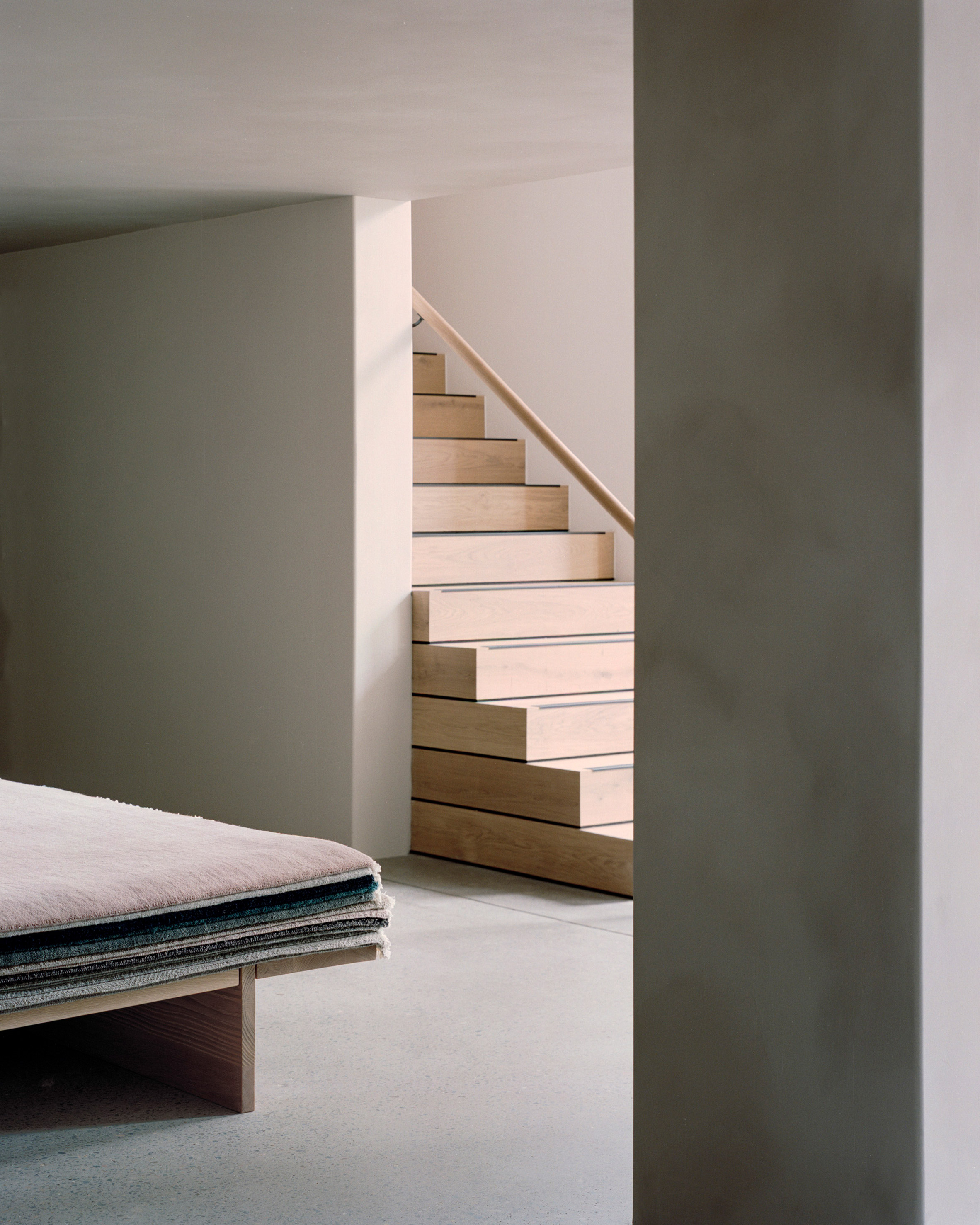 The focal point of the space is now a dramatic hanging sculpture by local artist Lisa Cooper, which is composed of bundles of foliage and hand-spun khaki wool from one of Armadillo & Co’s collections.

As the brand’s offices are situated upstairs, the studio also decided to create a window-front communal area that could be used by both staff and customers, bringing a “sense of life” to the showroom’s ground floor. 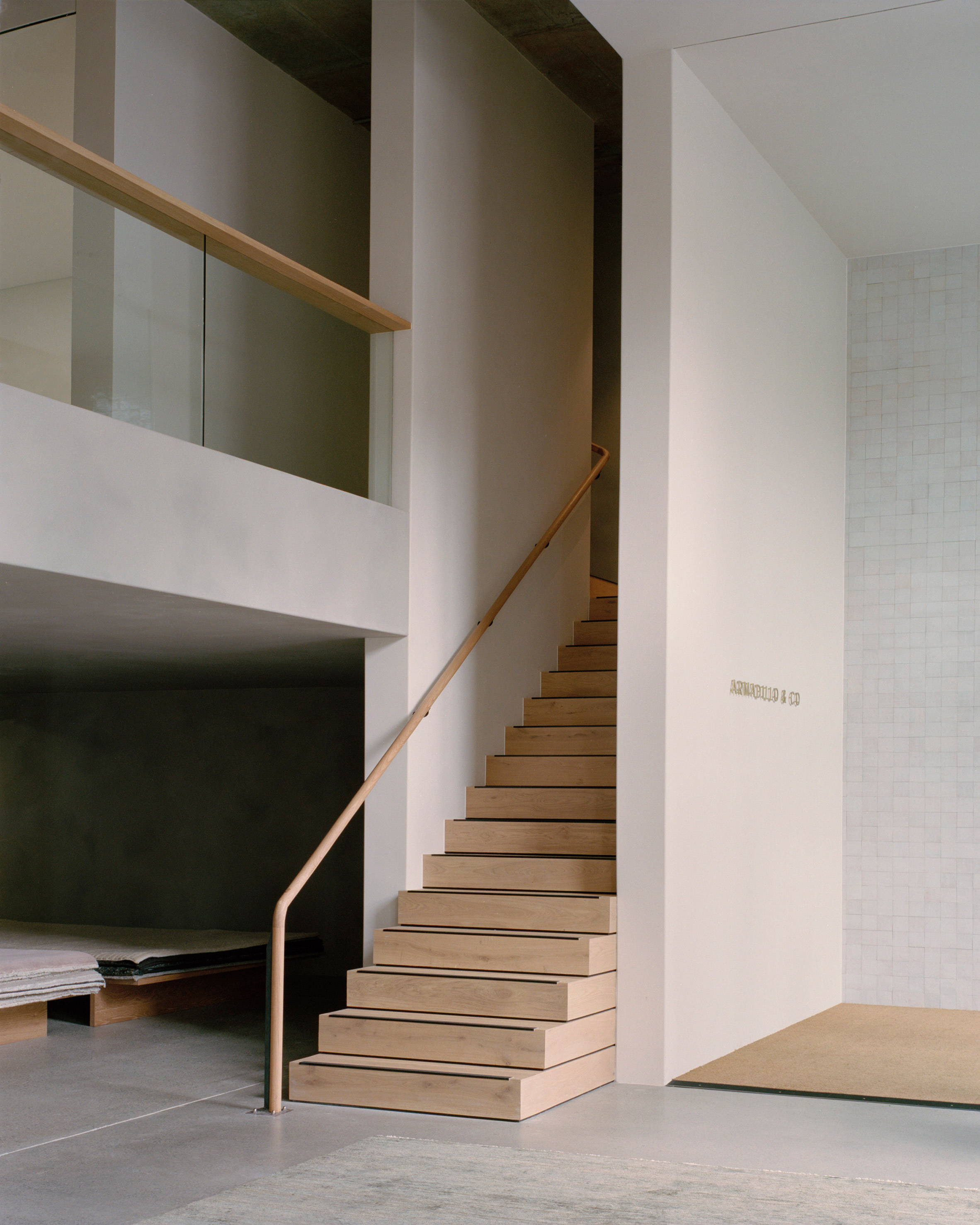 Wide panels of white oak wood have then been arranged in a grid-like fashion across the six-metre-high windows that front the showroom.

They’re intended to serve as frames where staff can create merchandise displays to be seen by passersby on the street.

Rugs are displayed across the floor, against the walls, or stacked up on low-lying timber plinths.

Towards the rear of the space there is also a sample room where customers can visualise their purchase in a smaller space that’s of more domestic proportions. 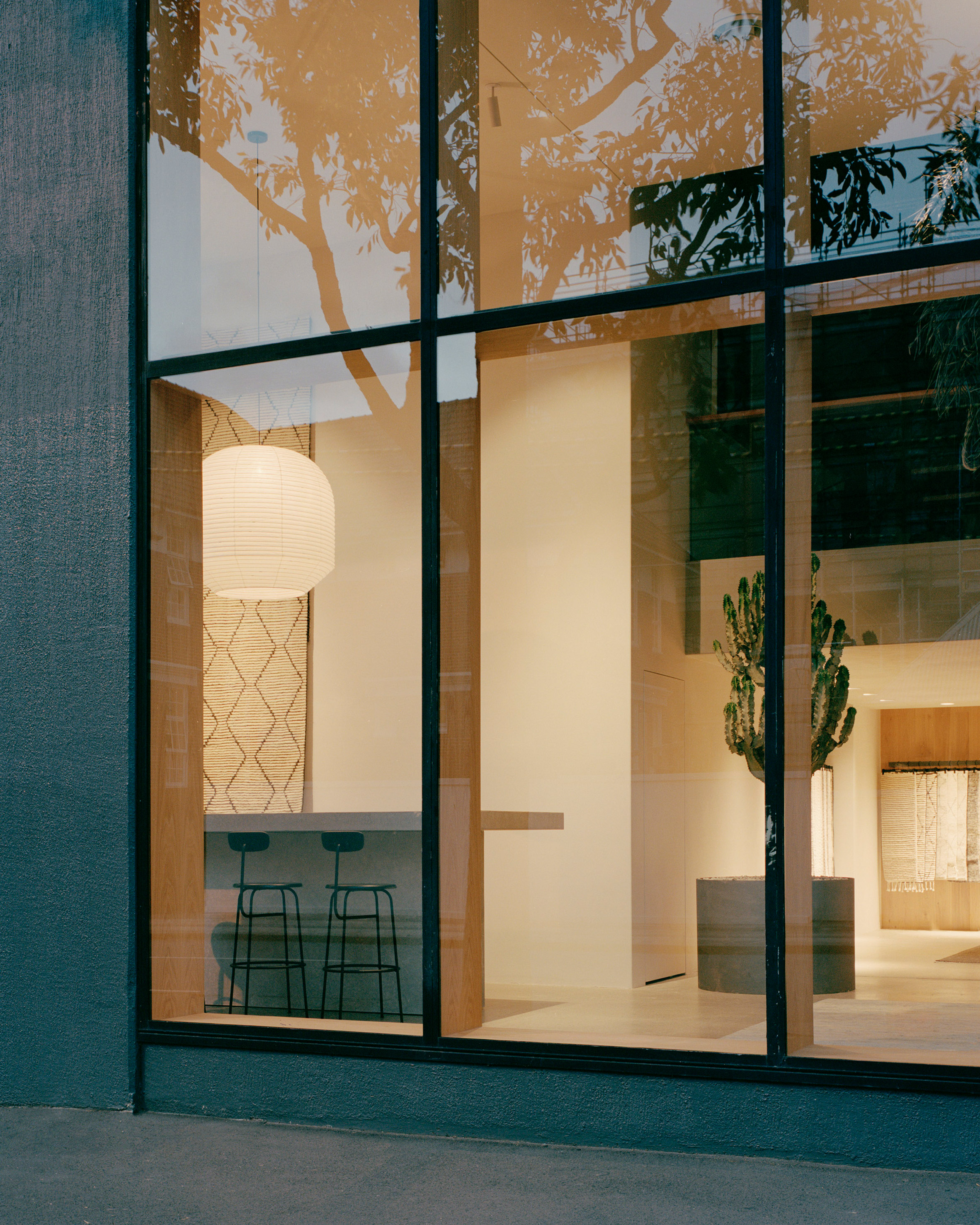 Studio Goss was established in 2014 and is based in Collingwood, an inner suburb of Melbourne.

This isn’t the first time the studio has worked with a restrained material palette. Back in 2018, it exclusively covered the walls of a clothing store in coarse concrete to emulate the materiality of brutalist architecture.