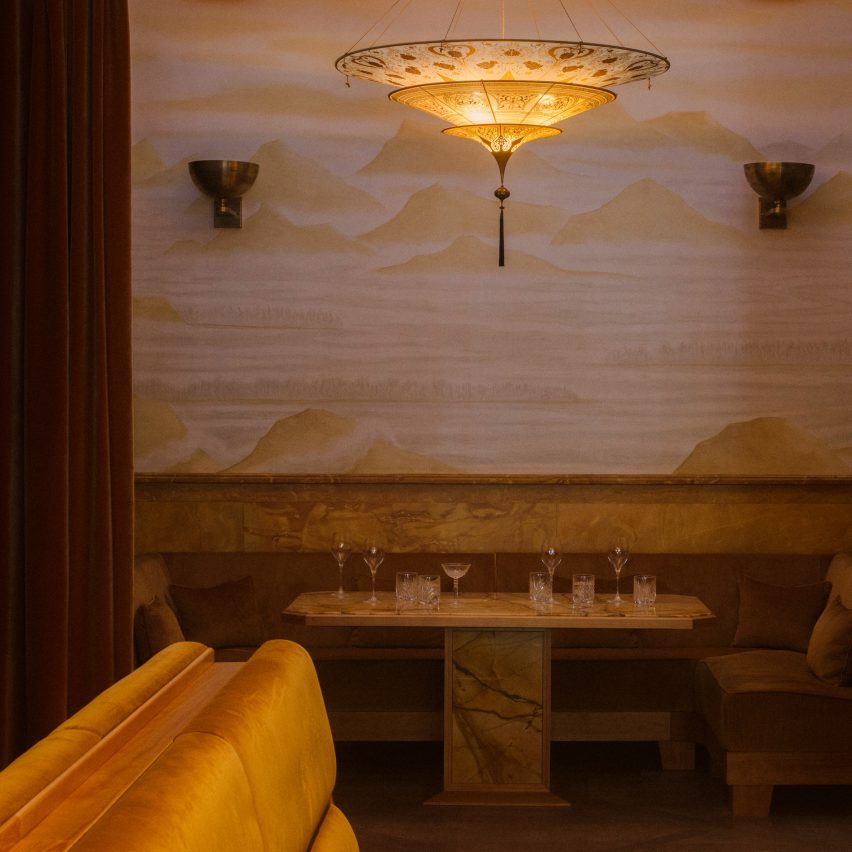 The restaurant is set within the five-star Nolinski hotel in Paris’ first arrondissement, just a short stroll from the Musée du Louvre, and Jardin des Tuileries. 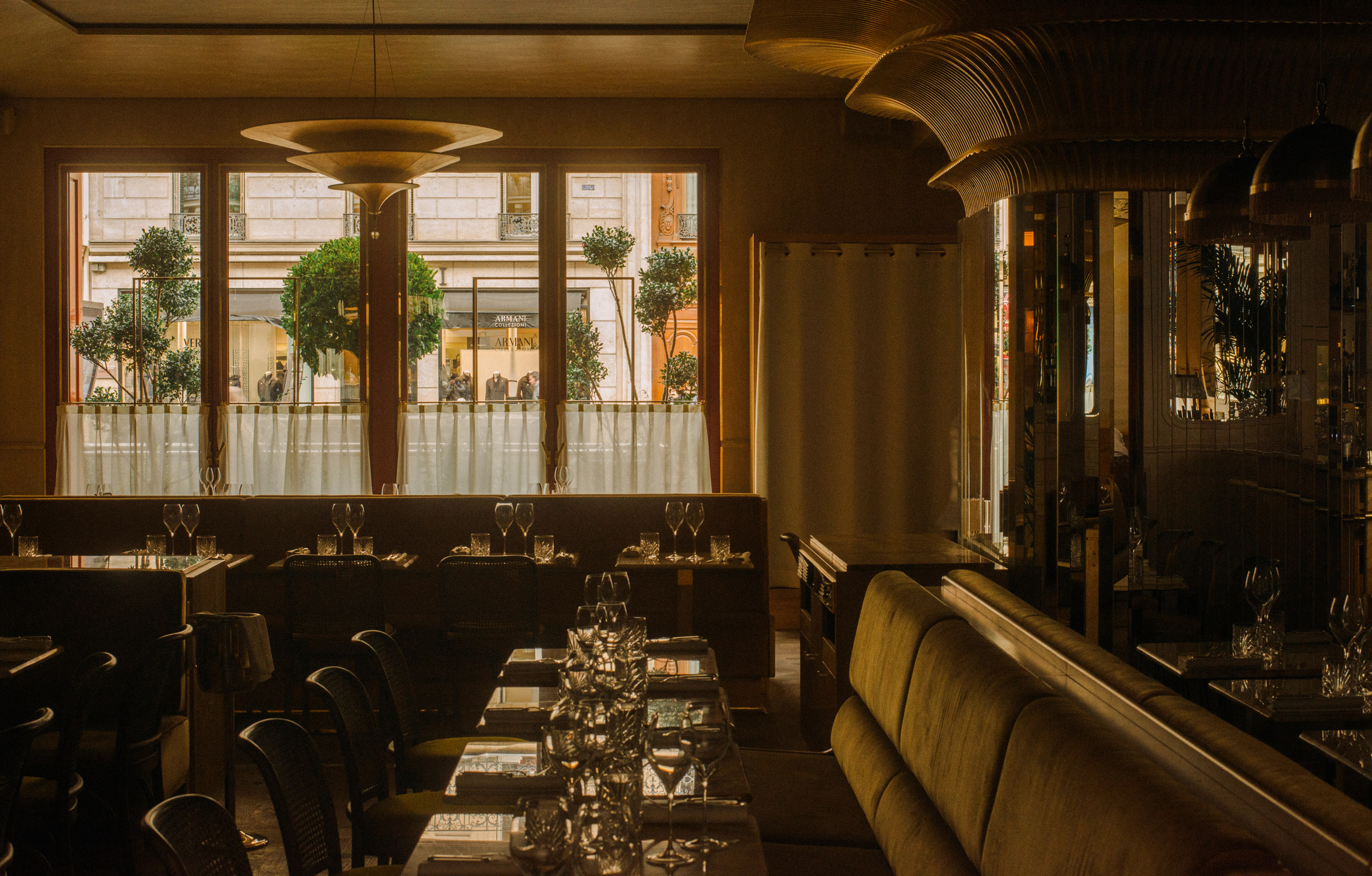 It had previously featured a mixture of blue and grey surfaces, as well as a dropped ceiling, resulting in what John Whelan described as an overall “cold” interior.

“There was also what I thought was a problem of ‘contre-jour’ where there are two competing natural light sources,” the London-based designer told Dezeen. Keen to bring a sense of warmth back to the restaurant, Whelan decided to base his design scheme on the rich material palette of the art deco movement.

“I was inspired particularly by the restrained Parisian art deco of the 1930s – think Jean-Michel Frank, Pierre Legrain or Sue et Mare,” said Whelan. “They tended to use a minimal colour palette but accented their work with beautiful metals and woods.”

“The building that houses the restaurant was also built in the 30s and has some art deco moments. I always try to respect the heritage where possible,” he continued. The focal point of the restaurant is now a central column that has been clad with strips of shiny mirror.

The upper part of the column is made from gold-leafed plaster, which splays towards the ceiling to form a “sunburst” shape – a popular motif of art deco design. 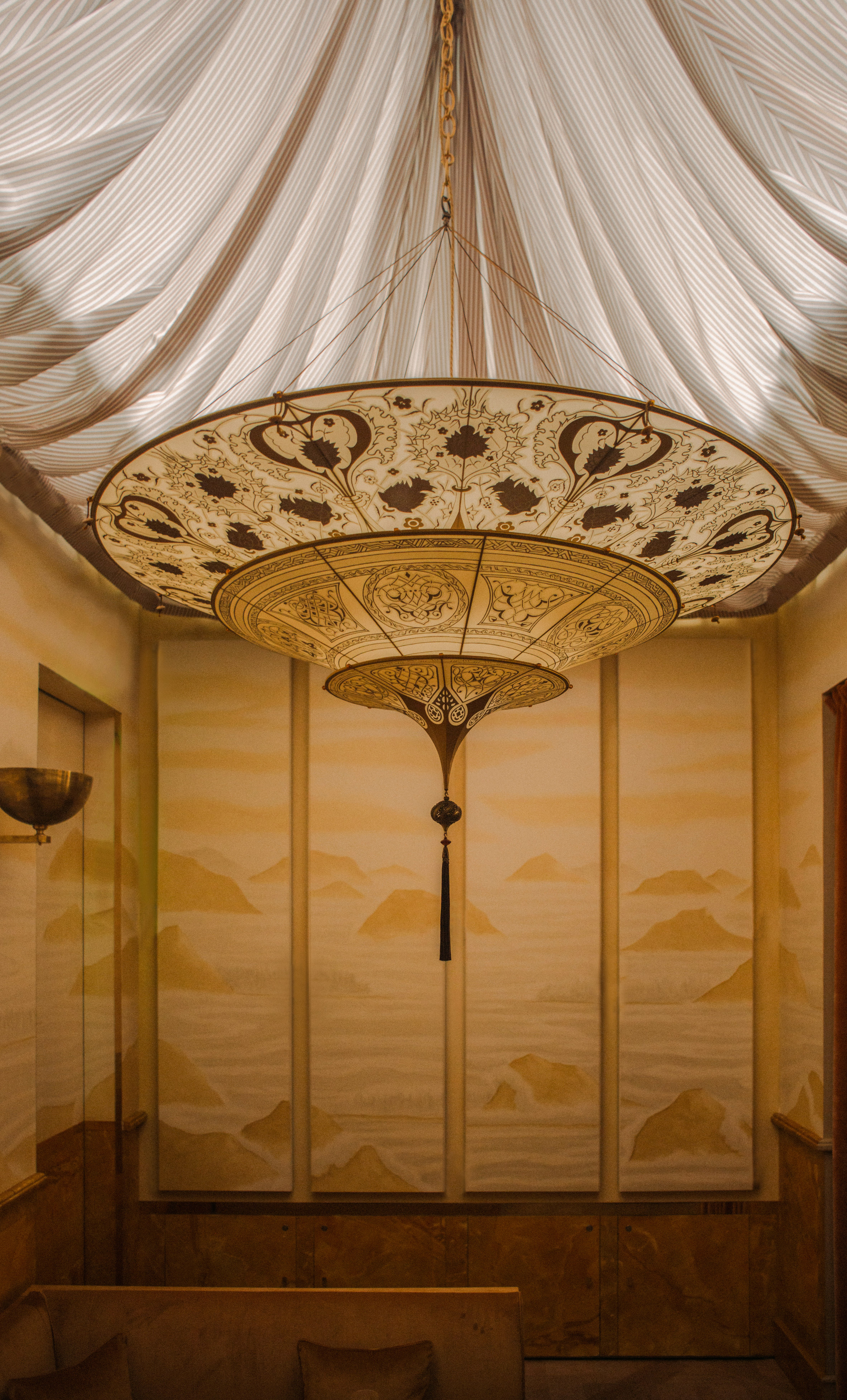 Mirrored panels have been set into the walls of the main dining space, which are otherwise washed with a gold-hued paint to create a slightly weathered patina.

Yellow-tone Siena marble has then been used to craft the dining tables, which are paired with cane chairs. Tasselled brass pendant lamps hang from overhead. 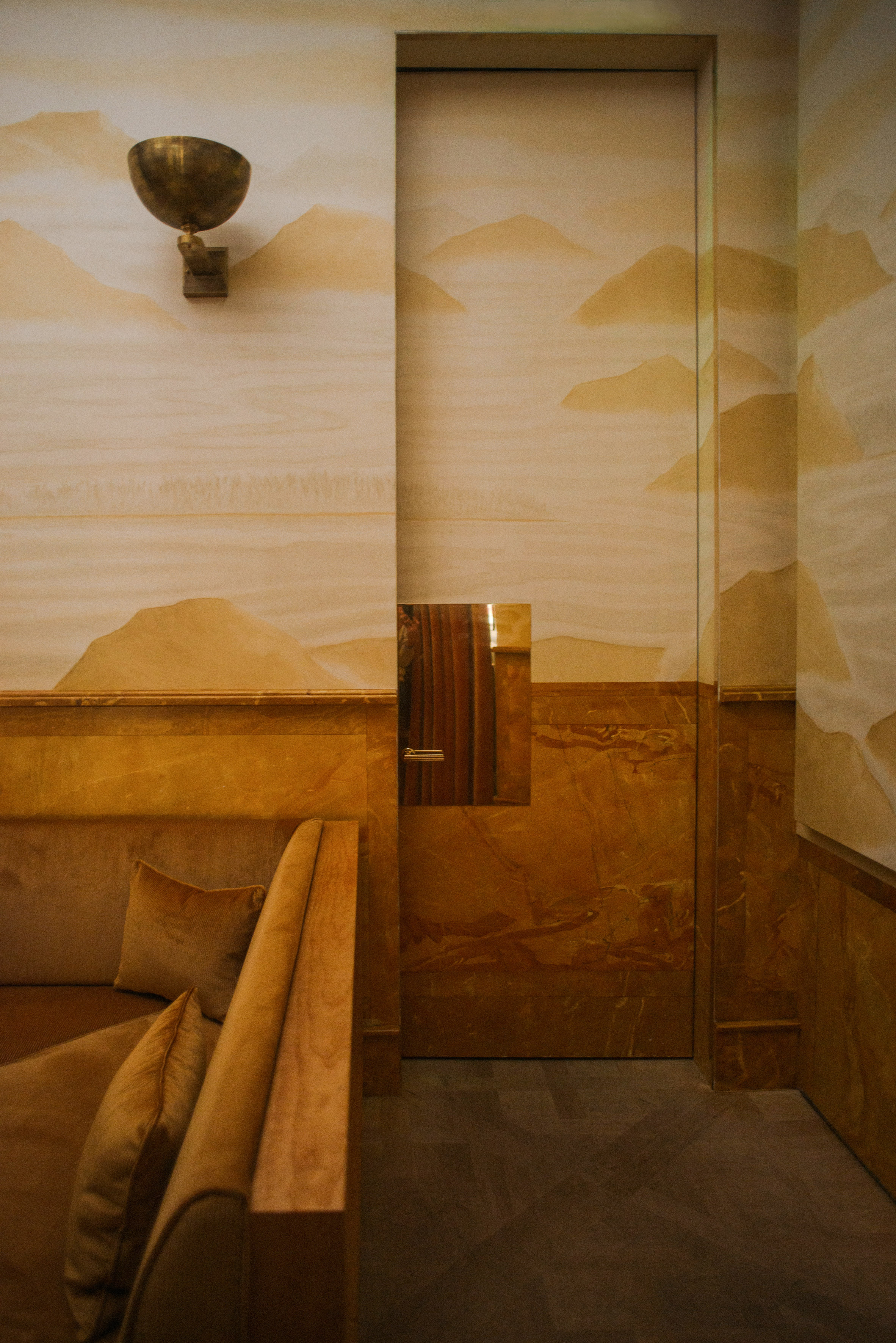 One side of the restaurant boasts a curved pine-wood drinks bar, while the other side has a private dining snug that’s screened off by caramel-coloured velvet curtains.

From the centre of its tented ceiling dangles an ornate, three-tier chandelier from Spanish brand Fortuny. 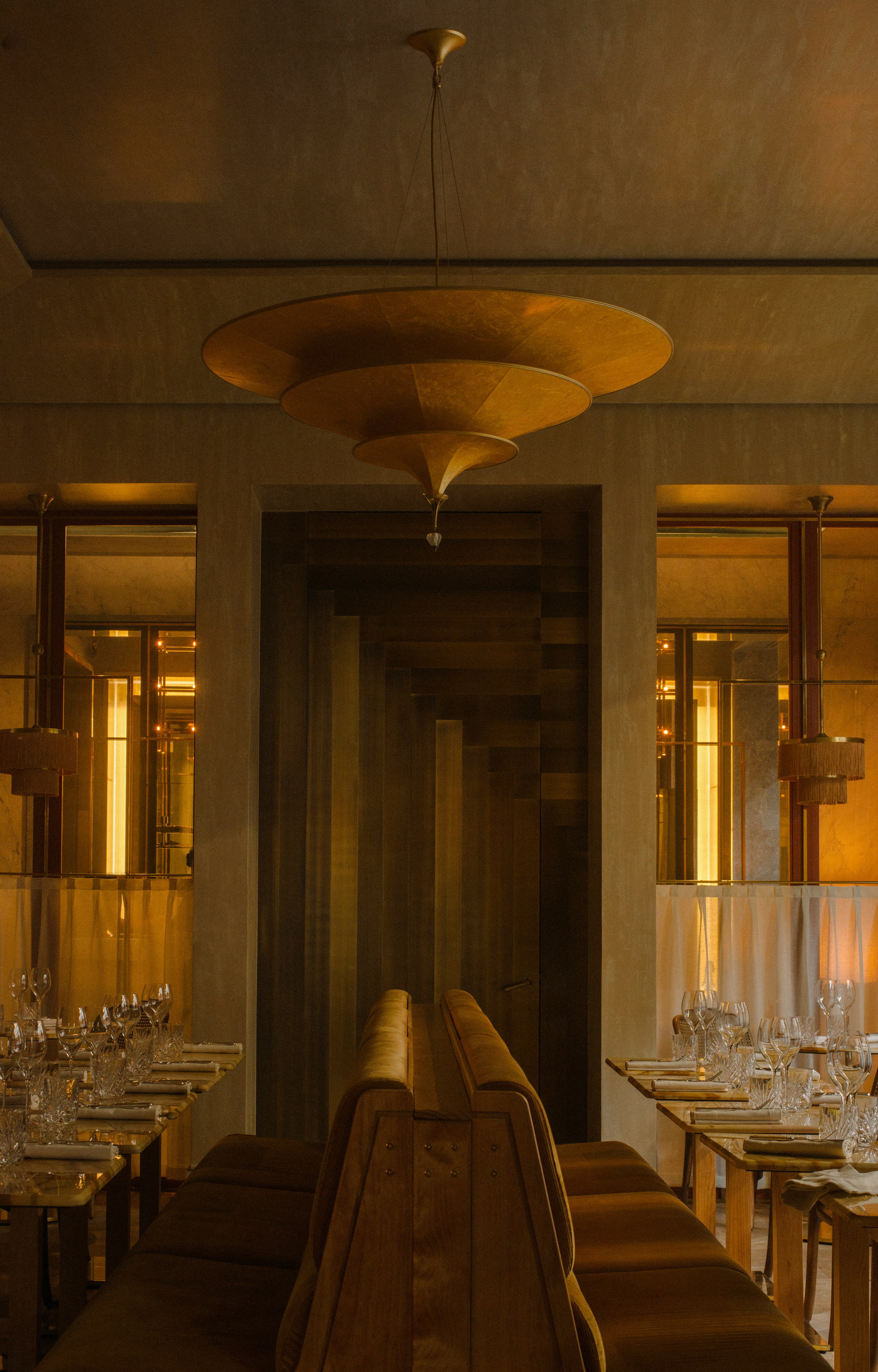 A Japanese-style fresco has also been created on the wall here, depicting wispy clouds floating around mountain peaks.

“The fresco creates a feeling of indoor-outdoor, working with the light above. It’s almost like a ‘jardin d’hiver’ which were very voguish during the art deco period,” Whelan explained. 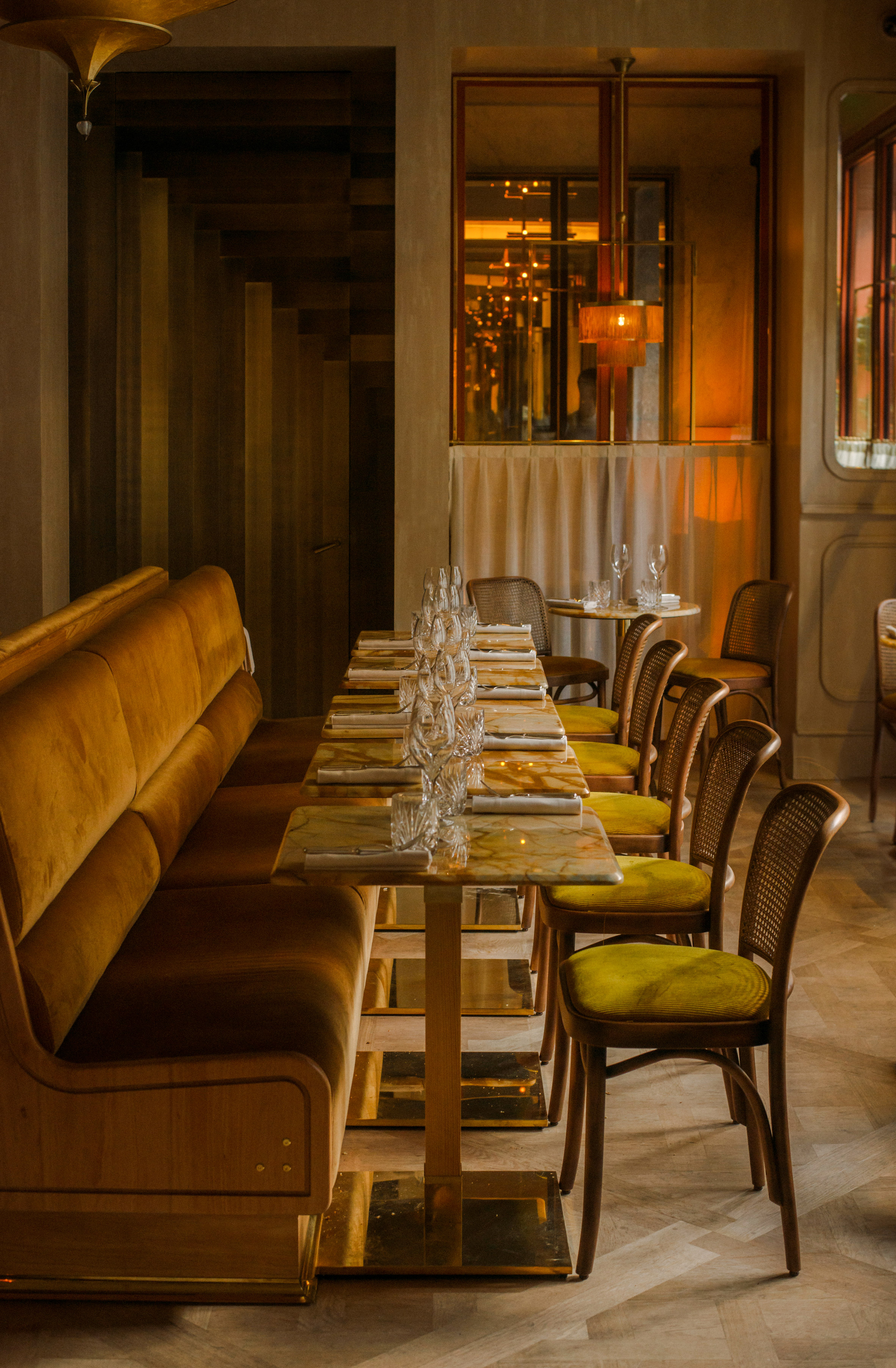 The restaurant’s tonal colour palette and some of its furnishings, such as the corduroy seating banquettes, are meant to wink at the 1970s – a time period that Whelan thinks is a “match made in heaven” with the art deco aesthetic.

“I’m convinced that the designers of the 70s were heavily inspired by the art deco period, as the sweeping forms and glamorous finishes reflect those in thrall to modernism and new forms of travel in the 30s,” he added. 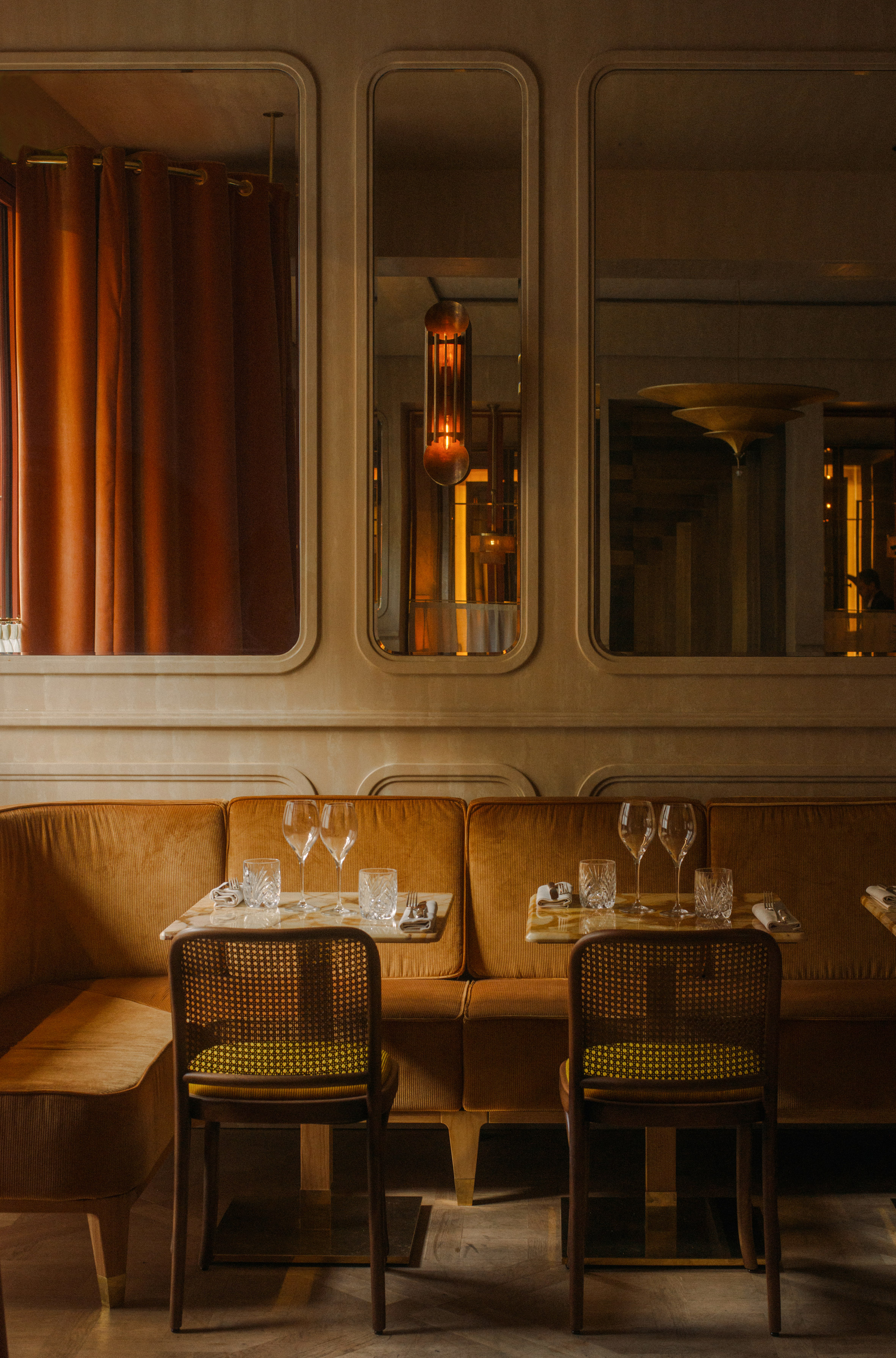 The designer also wanted the ambience of the restaurant to match the “moody seductiveness” of films by Hong Kong director Wong Kar-wai.

“I feel that hospitality is a form of escapism, the opportunity to live a more glamorous or ‘filmic’ life,” Whelan said. 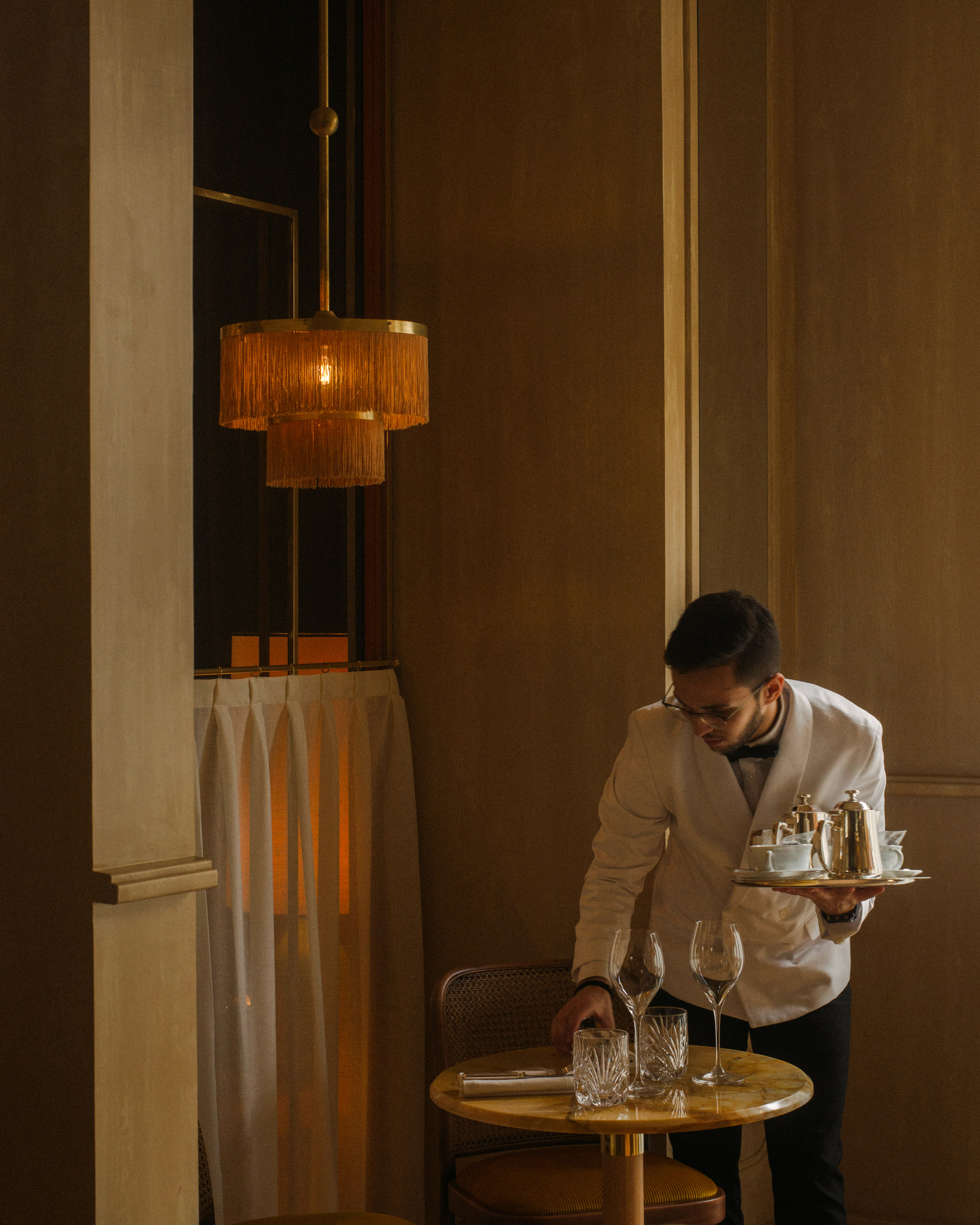 This is the first standalone project from John Whelan, who up until now has largely worked on the restoration of notable Parisian brasseries, as part of the creative collective The Guild of Saint Luke.

“Many of my previous projects had incredible bones to start with, so I felt more like I was fine-tuning masterpieces rather than creating my own,” said Whelan.

“This was the most challenging and rewarding project of mine to date.”

Photography is by Victor Stonem.