Mortar oozes between the off-white bricks that clad this house in Brisbane, which architect Peter Belsey has designed to look “immensely heavy”.

Couldrey House measures 320 square metres and is situated west of central Brisbane, nestled in the foothills of Mount Coot-tha. 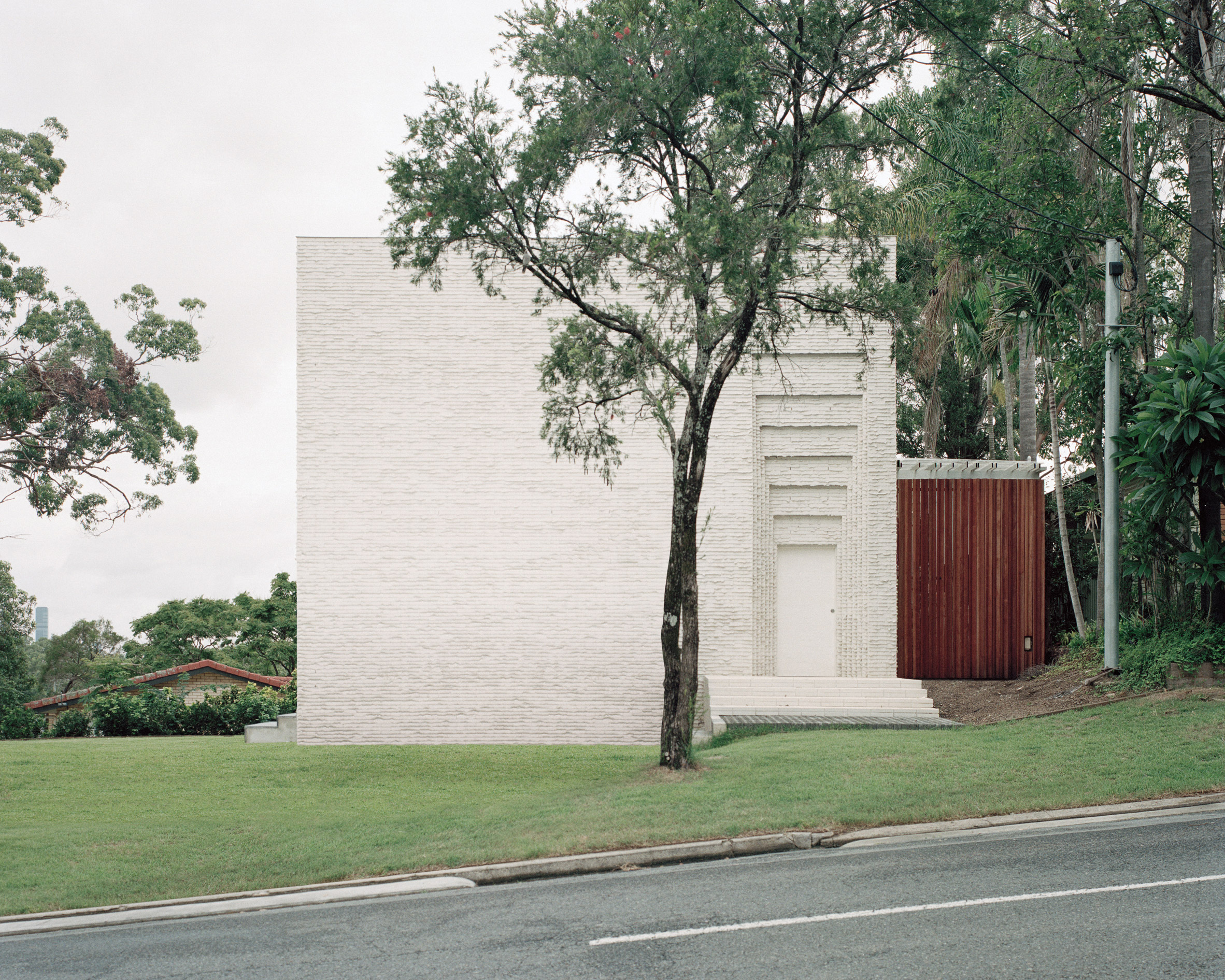 Besley wanted the house’s heavy materiality to contrast vernacular residential architecture in Australia, which he thinks is too-often built with lightweight materials that constantly need to be repaired.

It’s also meant to stylistically echo structures that Besley saw in Iraq, where he worked for a number of months. 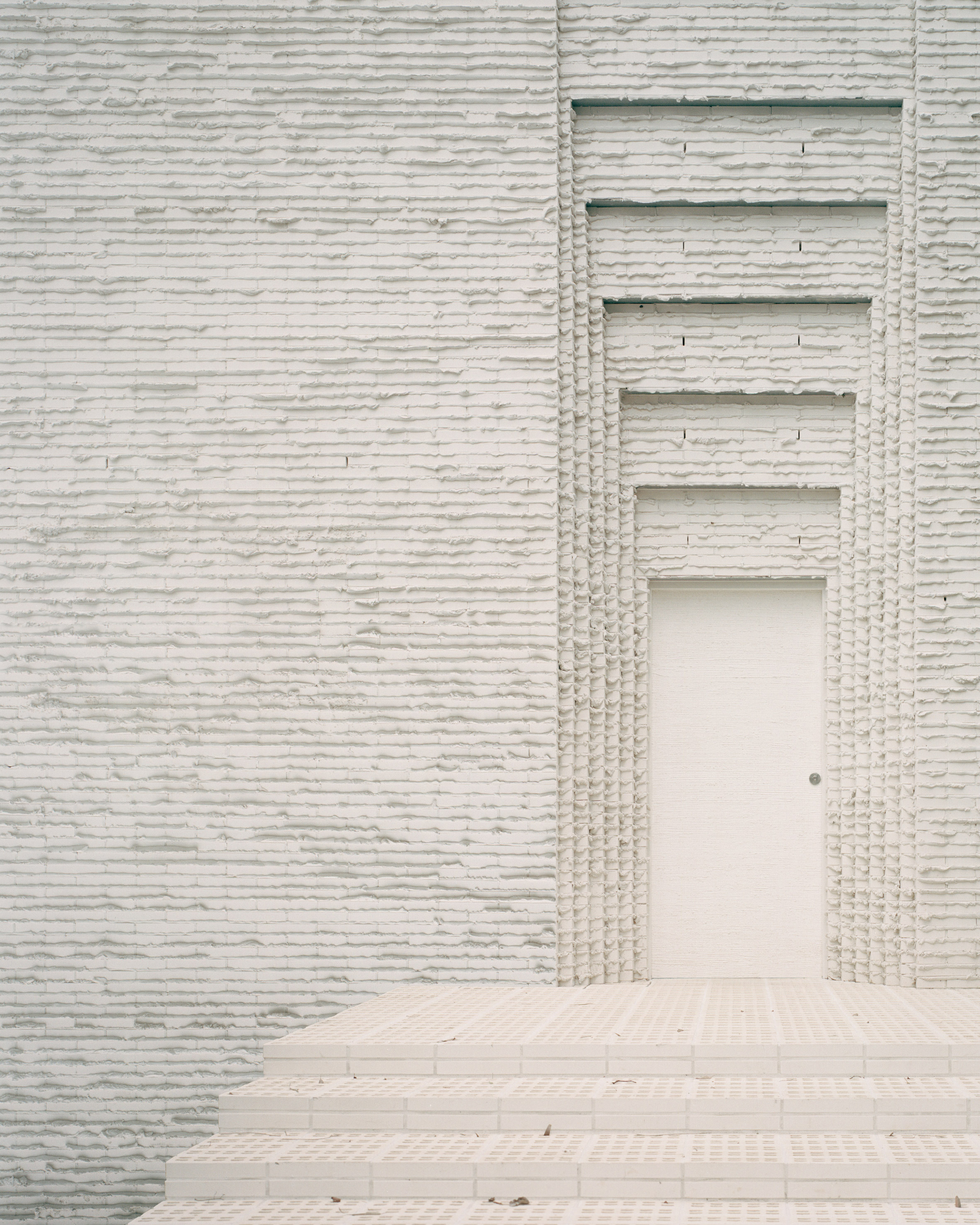 “Buildings there seem aware of the scale and solemnity of the land in which they sit,” said Besley, “the forms and spaces are compelling but simple – they sit heavily on the ground.”

“Through them, I have become particularly aware of the deeper, haunting quality of ancient landscapes of which Australia is one,” he continued. “The architecture of [the house] is designed to allow visual noise to fall away to heighten awareness of these qualities.” 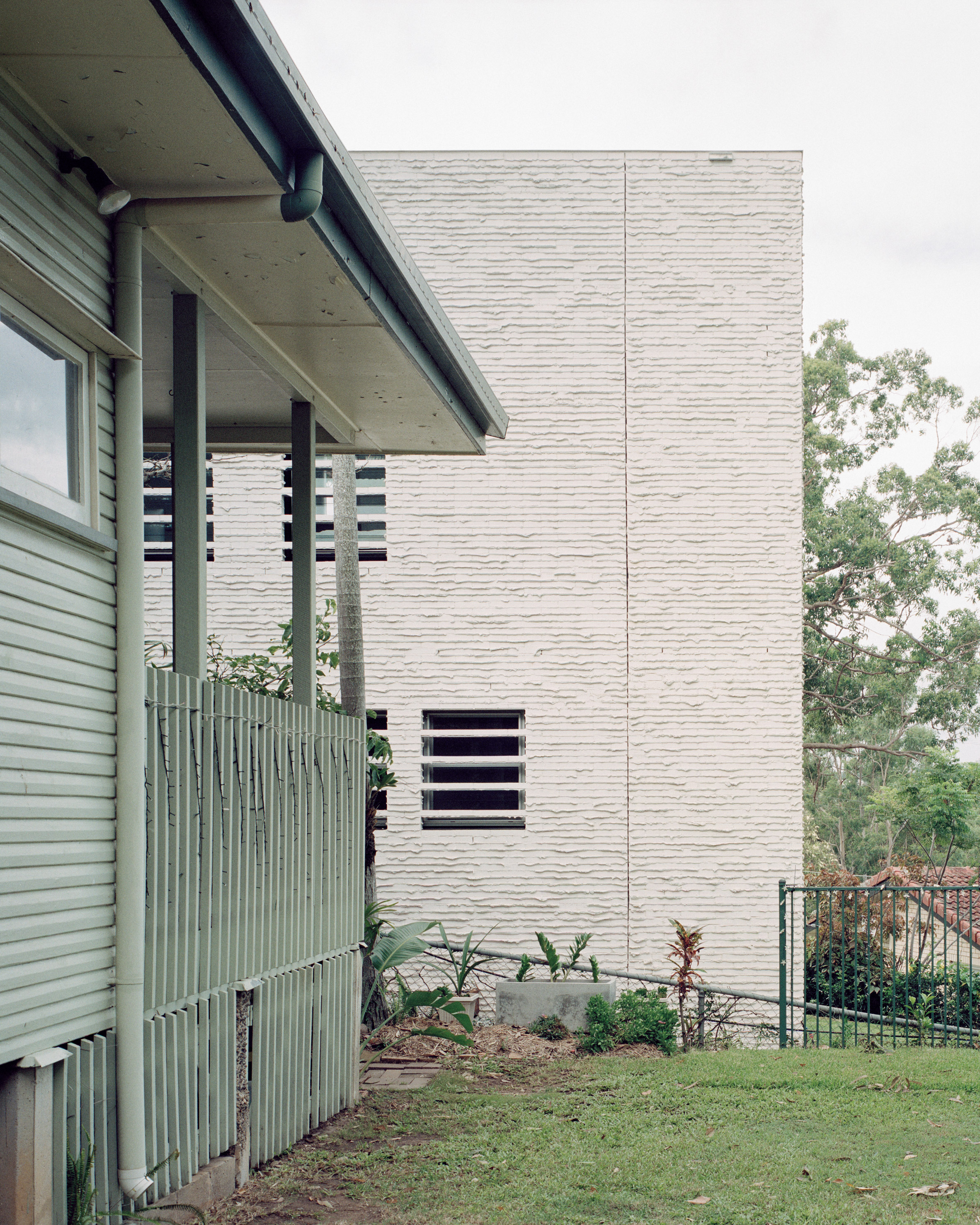 They’ve been joined together using a “mortar snot” technique – where excess mortar that pushes through the gaps between bricks is allowed to set and dry, rather than being scraped off. 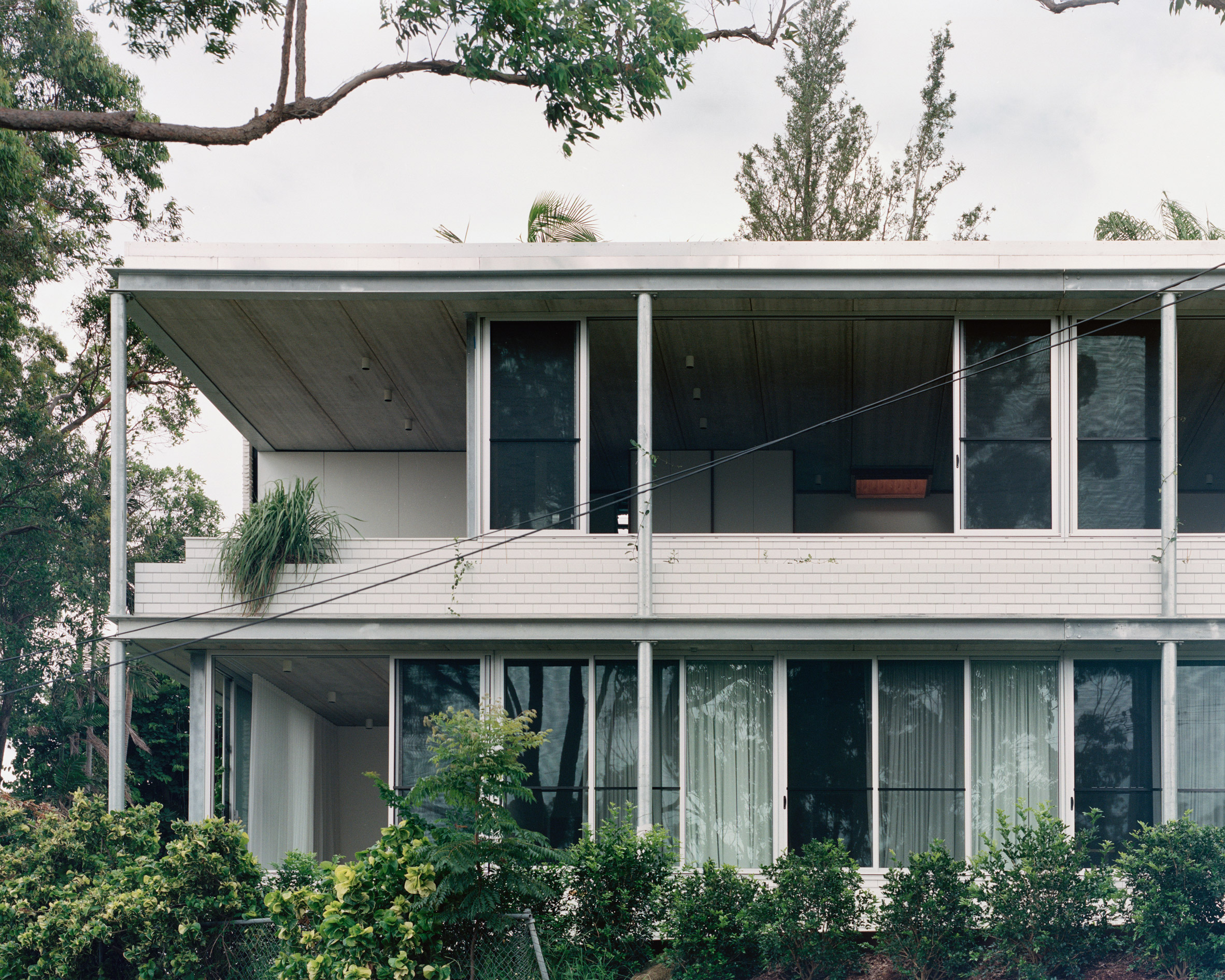 It leaves behind a bumpy, uneven surface texture that Besley hoped would juxtapose the uniformity of the bricks. The way in which the thick mortar bulges out from the facade creates shadow-play throughout the day.

“Together, the textural effect is striking, and starts to form aesthetic allegiances with landscape features – people have likened the brick elevations to tree bark, for example, or sedimentary rock,” explained Besley. “Children prefer to see it as a cake with icing.” Concentric rectangles frame the home’s front door to form what the architect describes as a “concertina” effect.

Directly in front is a wide flight of steps, crafted from perforated bricks that will be able to drain away rainwater when necessary. 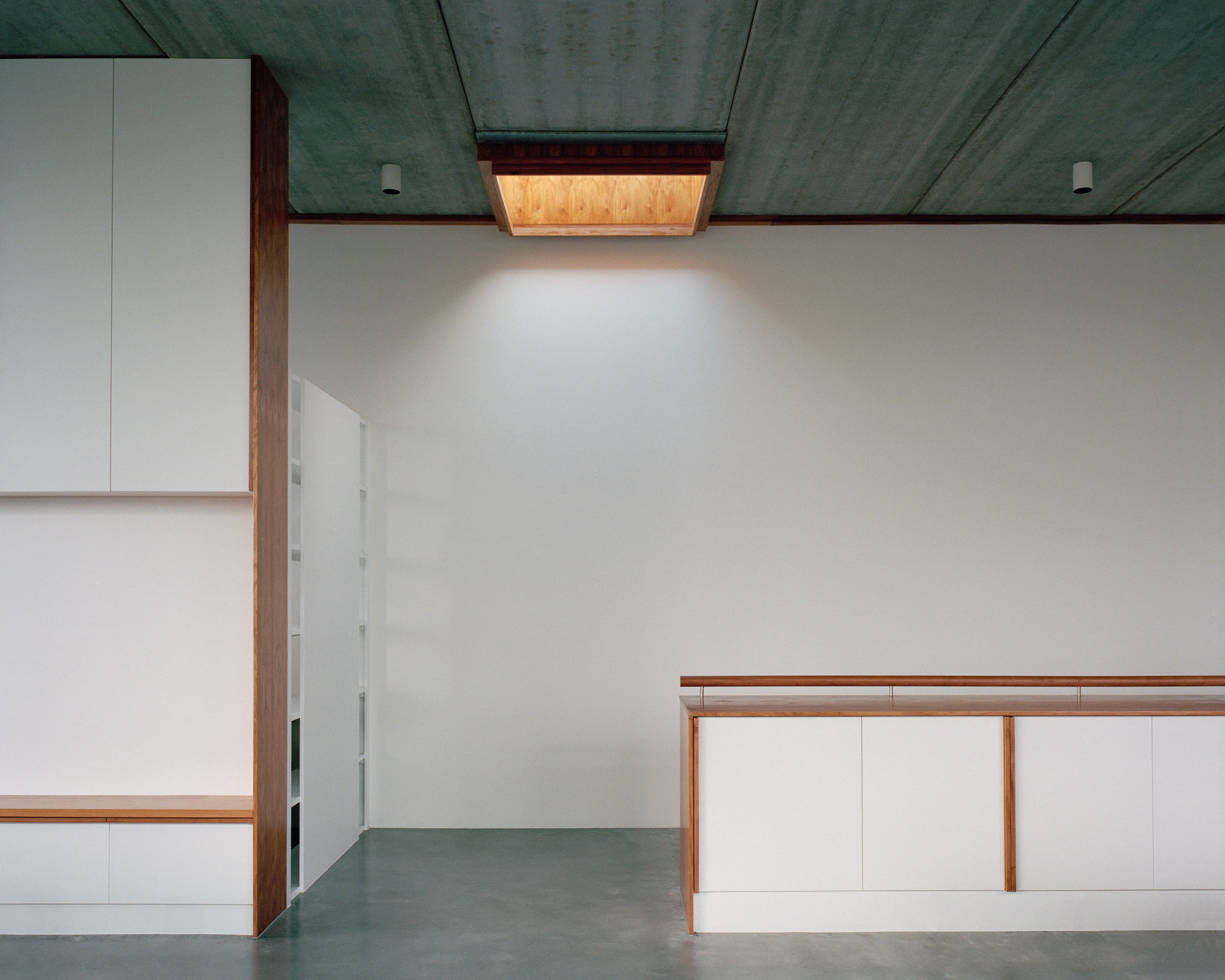 Apart from a couple of louvred openings that have been punctuated in the south side of the house, the rest of the brick facade is windowless to stop passersby peeking in.

Large windows feature on the north and east-facing facades, which can be slid back to let in fresh air and cooling breezes during the summer months.

These purposefully weren’t replaced with full-height panels of glazing – Besley wanted inhabitants’ sightlines directed away from the street and towards the greenery outdoors, fostering the feeling of “living high up amongst a tree canopy”.

Inside, communal living spaces have been arranged across the first floor, while sleeping quarters are down at ground level. 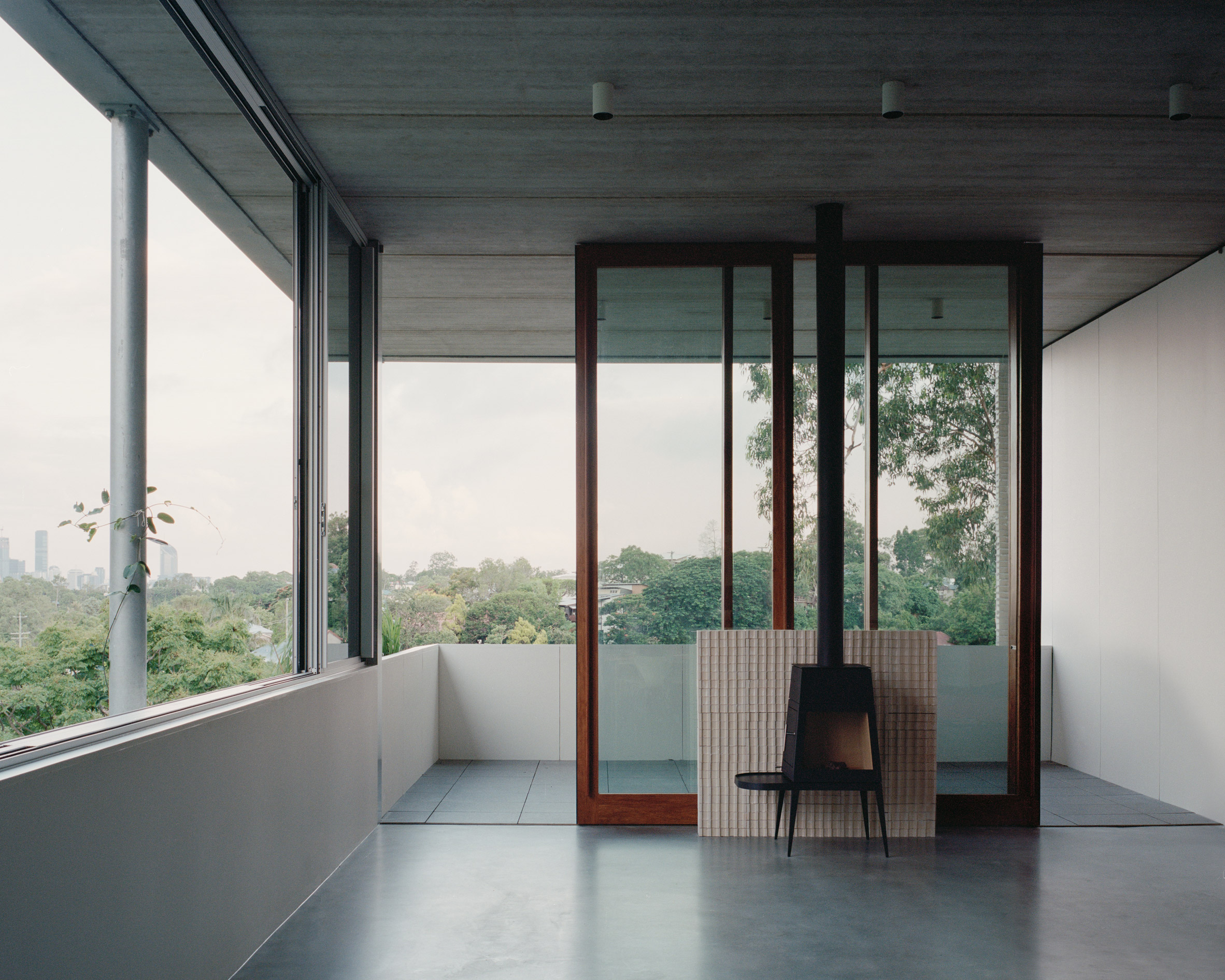 Rooms have been finished in a pared-back aesthetic that Besley felt complemented the home’s “sober” exterior – concrete floors run throughout and a majority of surfaces, including the storage units, are plain white.

Elements like the door frames, staircase handle and breakfast island in the kitchen are crafted from warm-hued timber. Bricks that were about to be cast away in a rubbish skip were also saved and used to create a backing for the fireplace. 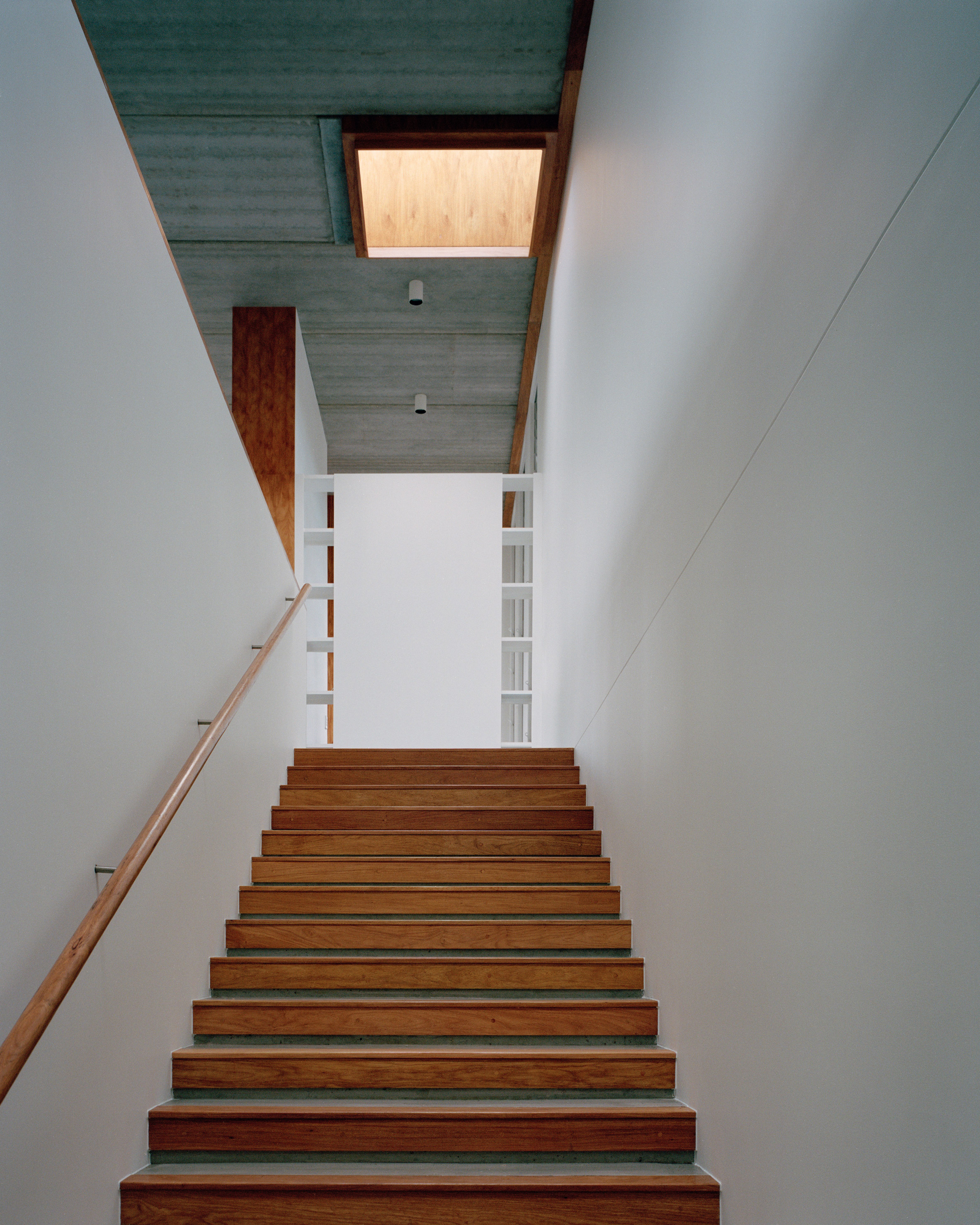 “The overall effect of the envelope is sober, and somewhat other-worldly; the masonry was important so the building’s character develops and becomes more nuanced as it weathers and ages, and does not require continual replacement in order to look new,” concluded Besley.

“The building should get better, not worse, with time.” Besley previously headed-up architecture practice Assemblage but now runs his own self-titled studio, working between offices in London and Brisbane.

Bricks are a popular material of choice for architects looking to create statement facades. Khuôn Studio fronted a house in Vietnam with perforated grey bricks, providing shade to its internal atrium, while Stanton Williams used an array of cream-coloured bricks to create a “textured protective shell” around a London home.