Atelier Rua has arranged living spaces in this pared-back Portuguese holiday home around an enormous living room, which has three different vistas of its verdant surroundings.

Situated south of Lisbon in the small village of Aldeia do Meco, the one-storey concrete house is shared by a retired Dutch couple.

The pair were keen to work with Atelier Rua after seeing the practice’s Pensão Agrícola project, a rural hotel in the Portuguese town of Tavira.

They wanted a holiday home with a similarly laid-back feel, where they could while away summer months and have their grown-up children come to stay. “They didn’t want doors, and as much as possible, that the plan would be open,” Paulo Borralho, partner at the practice, told Dezeen.

“They wanted a house that would promote the independence of each bedroom, and that the common spaces could be spaces for gathering.” With this in mind, Atelier Rua designed Casa Meco as a “perfect square” – its corners are formed by four guest suites, each complete with their own bathrooms, dressing areas and private patio.

These are intended to be “family clusters”, where respective groups of visiting guests can retreat for privacy. At the heart of the plan lies a huge communal living area with an exposed-concrete ceiling and floor.

Three sides of the room have been fitted with glazed panels, which can be slid back to open-up the interior to the outdoors.

Furniture includes a taupe-coloured sectional sofa, long timber dining table, as well as a couple of creamy armchairs. The rear kitchen is anchored by a veiny marble breakfast island. “Of course there’s an inherent playfulness in this plan. We used geometry as a ‘motor’ to design the whole house,” Borralho explained.

“The private patios, the ‘family clusters’, the living room; they are all squares inside squares.” 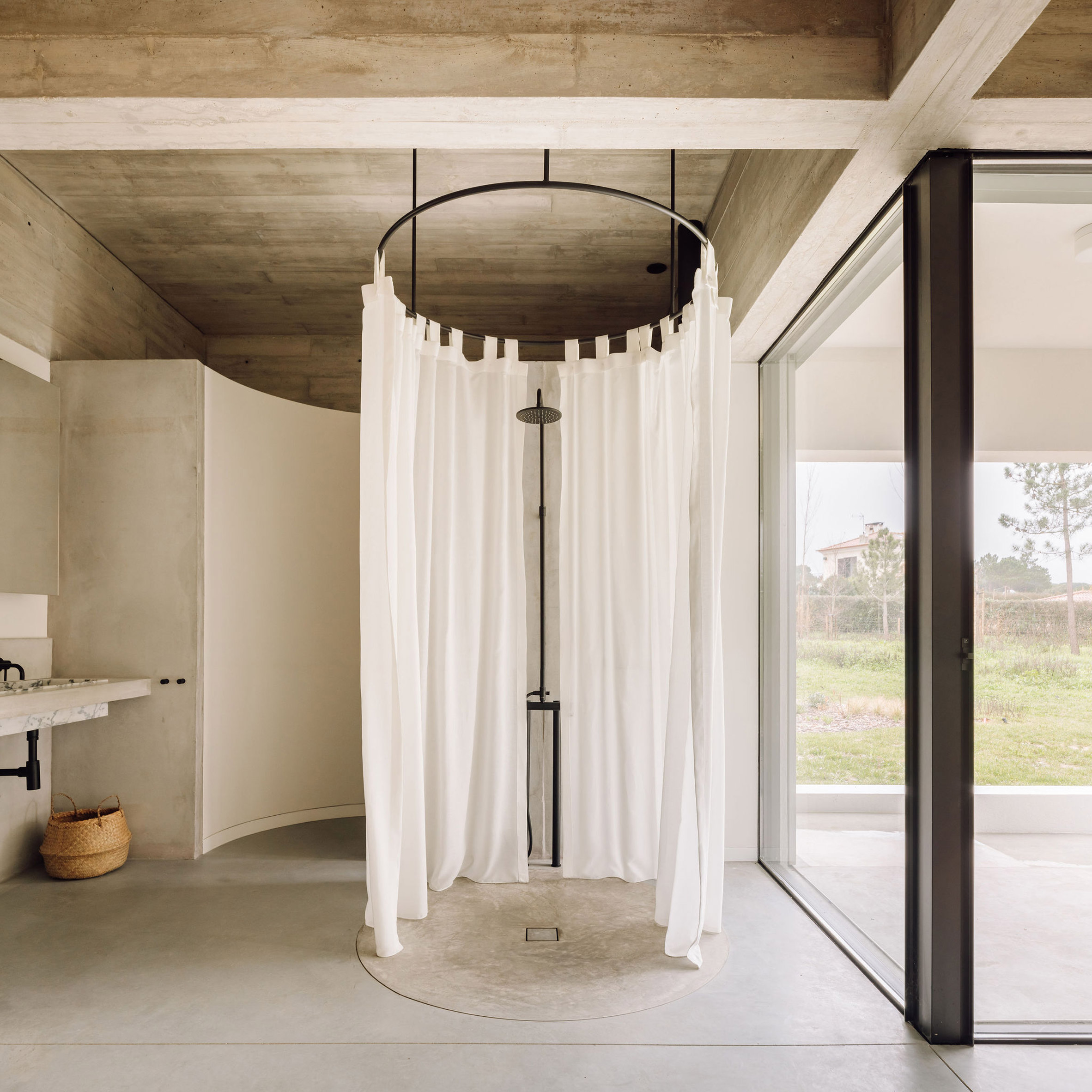 The bedrooms are accessed via small vestibules that jut into the living area. They follow the home’s pared-back aesthetic and are dressed simply with woven rugs and exposed-bulb pendant lamps.

Although marble has been used to craft the bathtubs and sink basins in the ensuites, the showers are screened-off by white curtains that hang from a circular track on the ceiling. 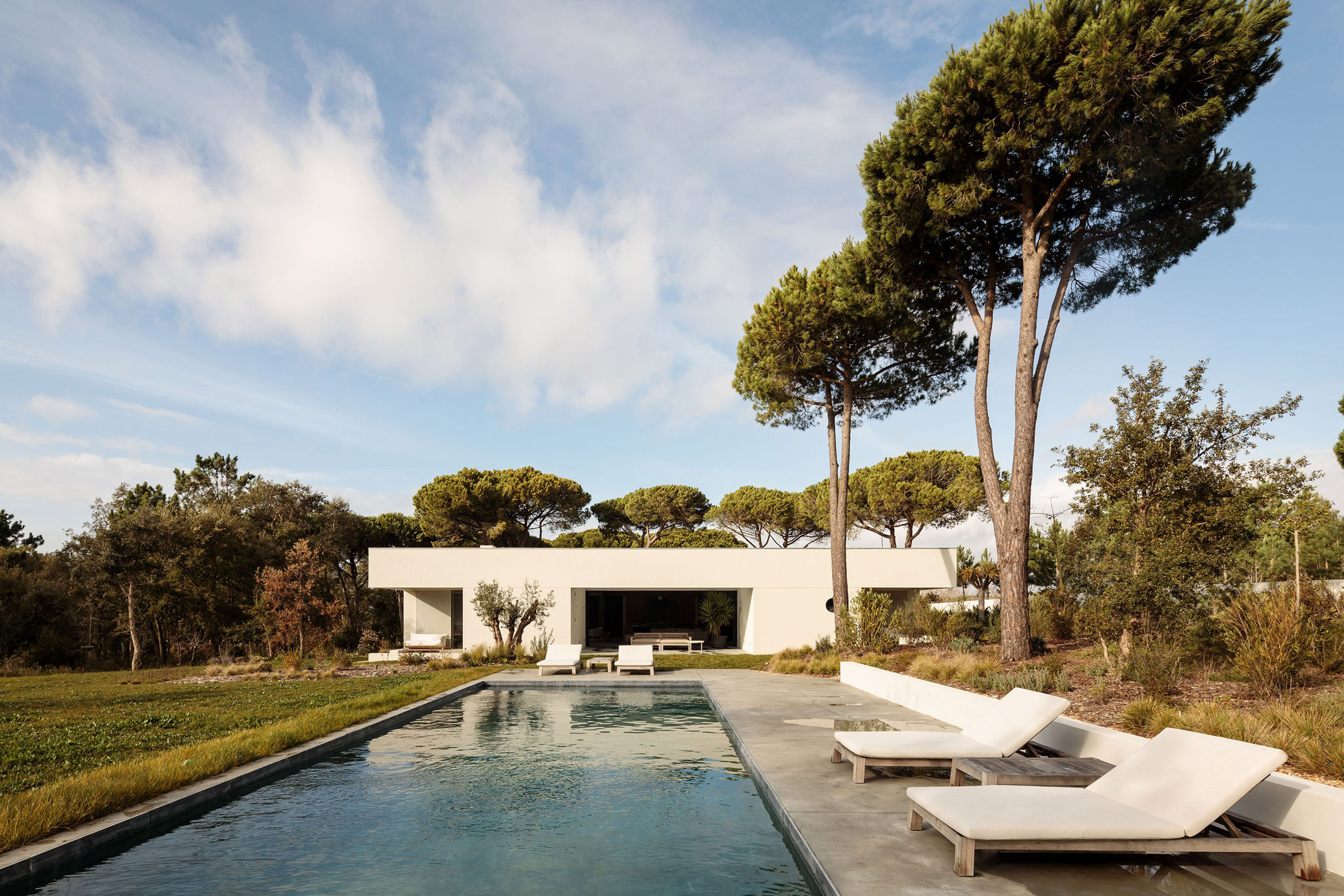 Rectilinear openings have been carved out of the east, south and west-facing facades of Casa Meco to create shaded terraces.

One of them directly overlooks the home’s 15-metre-long swimming pool, and has a table and grill cooker so that it can serve as an alfresco dining space.

The rear wall of another terrace has been punctuated with a huge arched niche, which is used as an open fireplace. 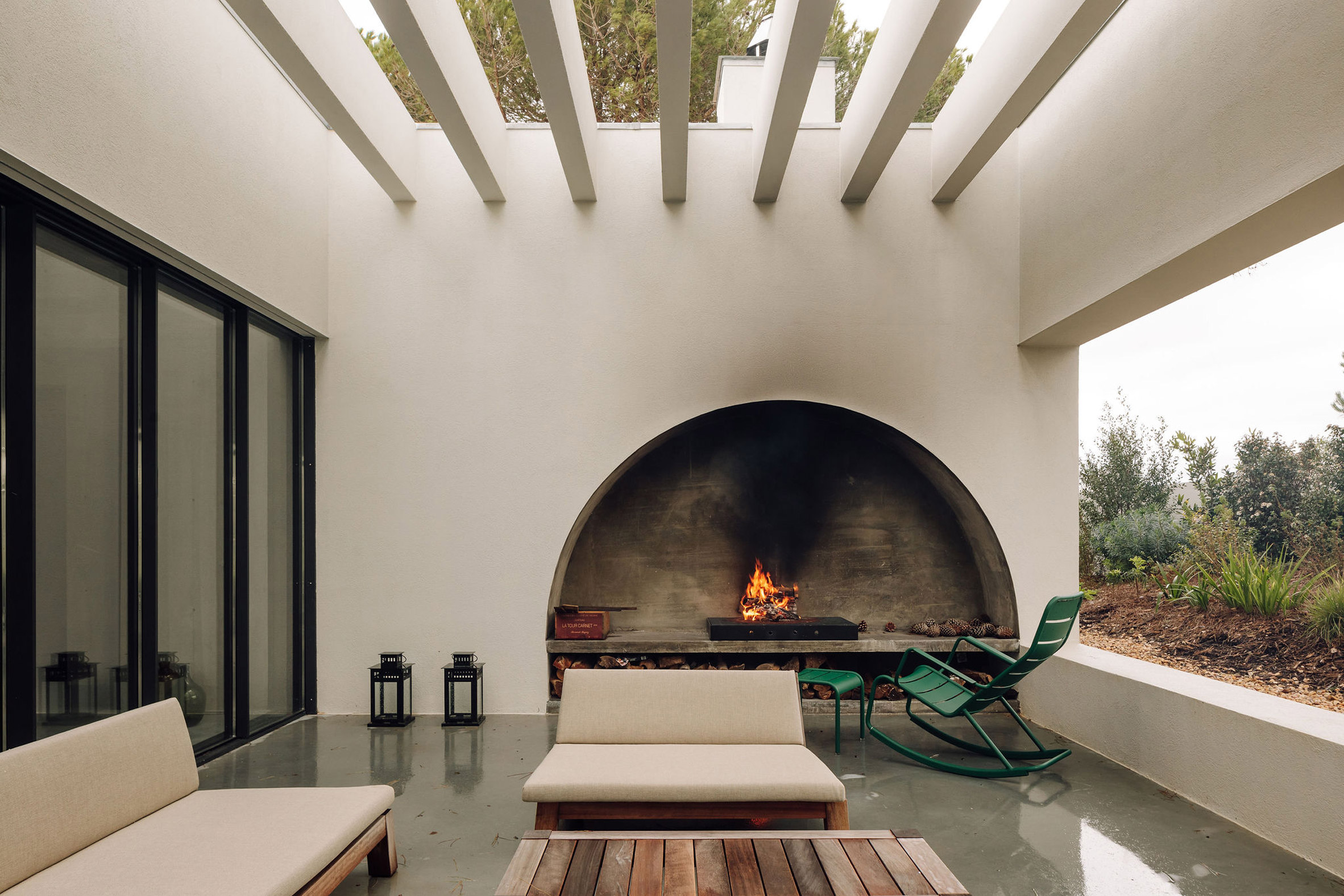 Atelier Rua was established in 2006 and has offices in Lisbon, Cape Verde and Mozambique. Its Casa Meco project joins a host of striking homes that are dotted across the Portuguese landscape.

Others include House in Monsaraz by Aires Mateus, which is embedded underground and concealed by a green roof, and TS House by architect Pedro Miguel Santos, which is designed to emulate classical temples.

Photography is by Francisco Nogueira.