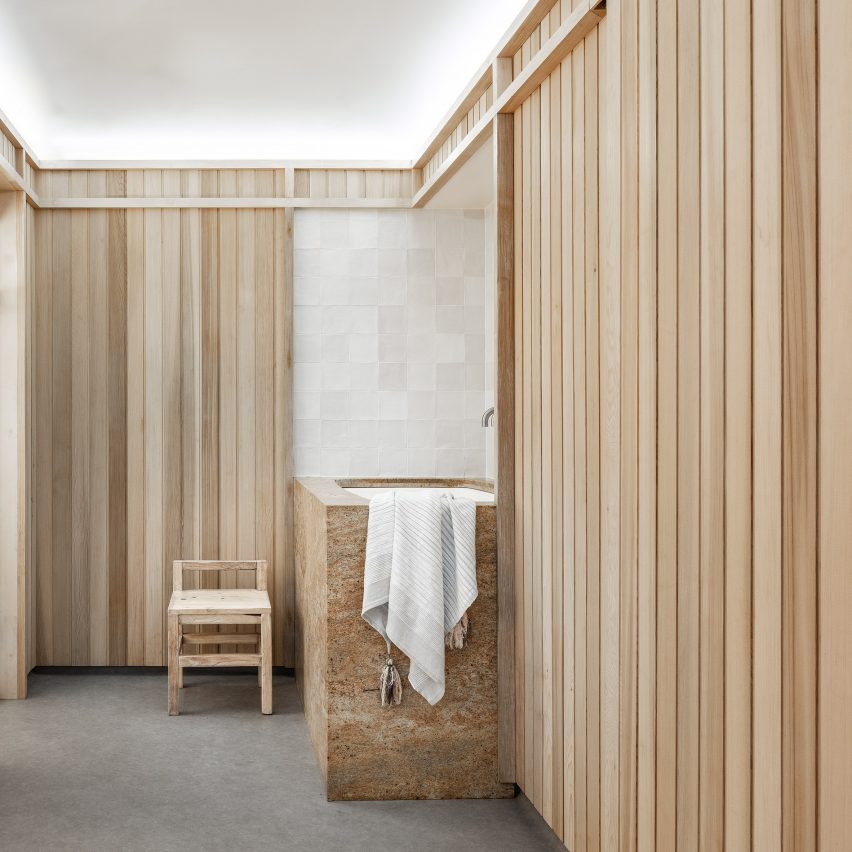 Cedar furnishings, leafy eucalyptus branches and steel partitions feature within this spa and wellness centre in Sydney, which has been designed by local practice Esoteriko.

Located in a former restaurant unit in the back lanes of Sydney’s Double Bay neighbourhood, Shelter is a wellness centre equipped with ice baths, saunas, a gym and juice bar.

Spread over two floors, the interior was created by Sydney-based interior architecture practice Esoteriko, which was founded by Anna Trefely in 2017. 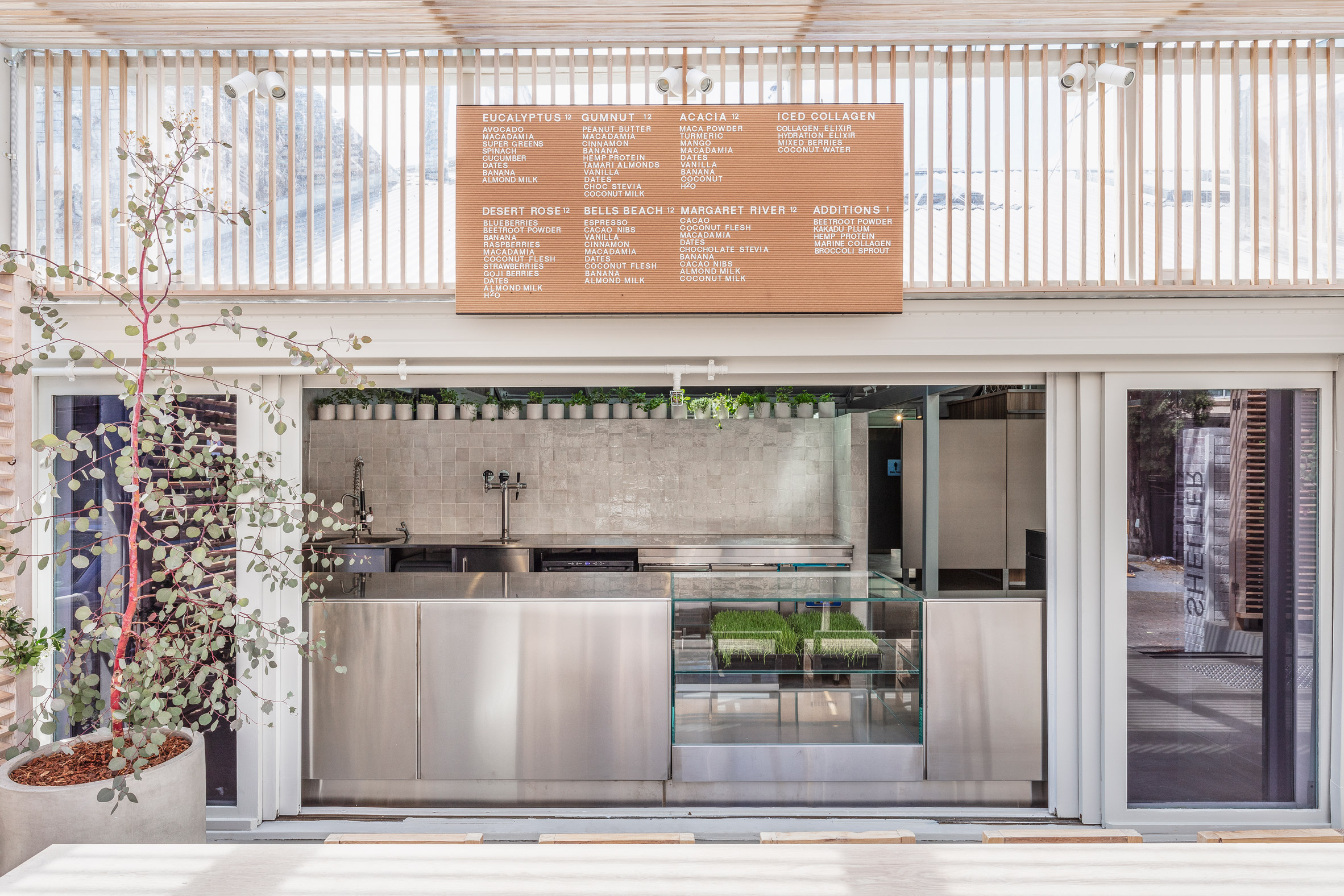 According to Trefely, the interior is designed to emulate the quality of the Australian lifestyle. All of the human senses were considered during the design process, from texture and sound to light, as well as particular scents.

Key features of the space include an abundance of natural light and the use of woods that are native to Australia such as cedar and eucalyptus. 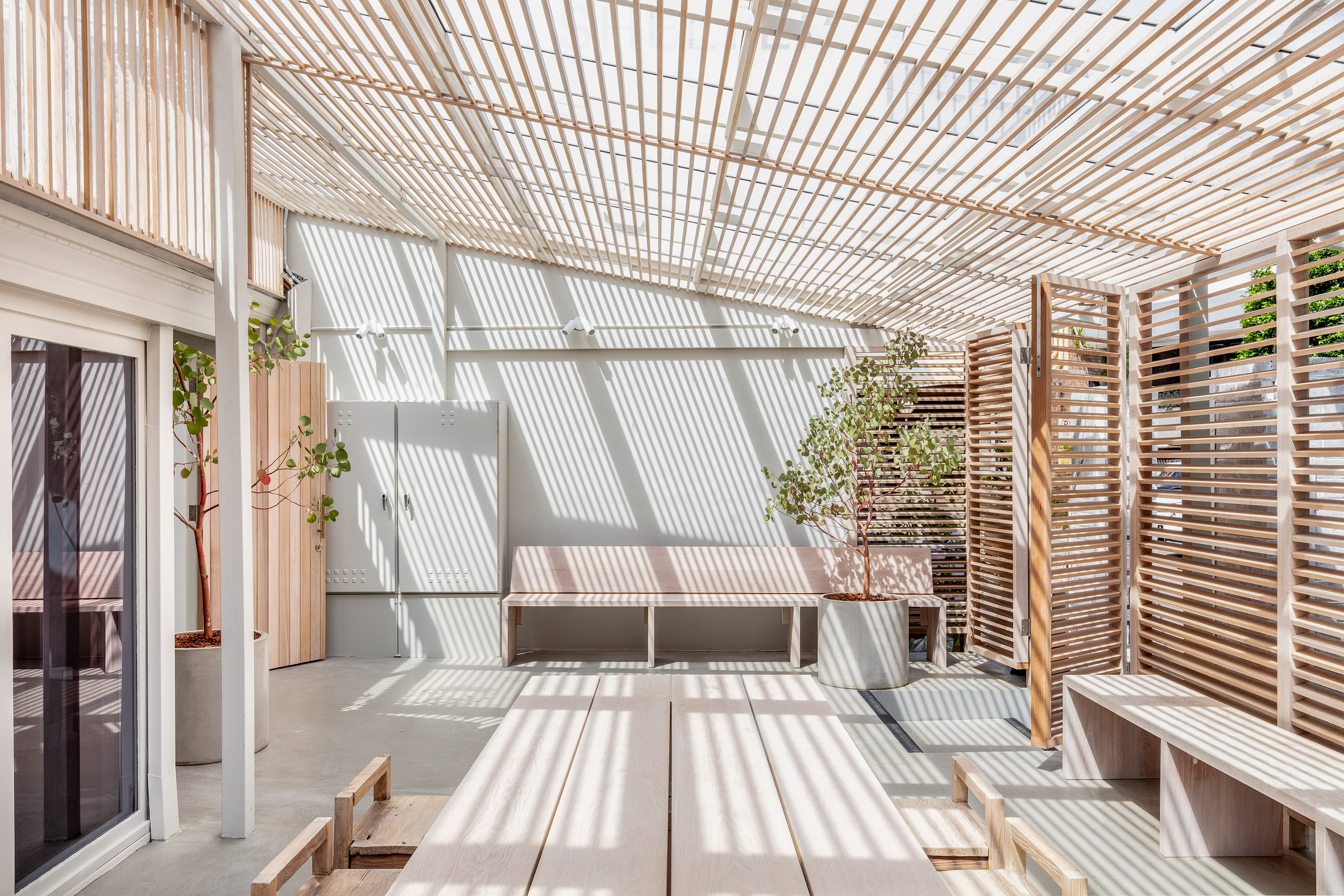 The biggest challenge was fitting all of these amenities into the building’s existing shed-like structure, which has a relatively small 200-square-metre footprint.

“The design approach was a simple organisation of space with a restrained and carefully considered palette of materials,” Trefely explained.

“The interior planning was refined to express itself in an uncomplicated and efficient manner.” 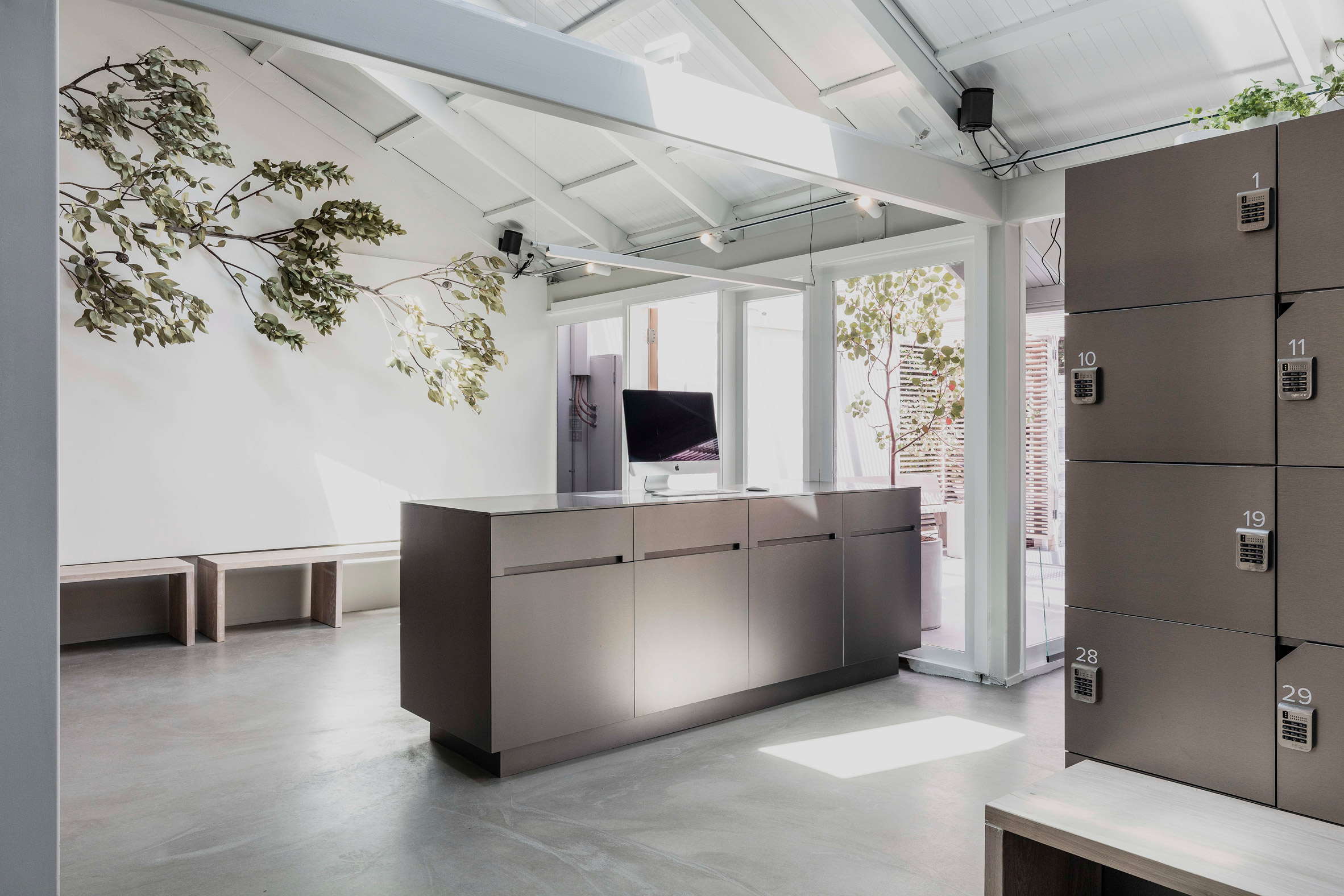 The practice used light textures and colours, greenery, and indoor-outdoor spaces to create the feeling of space and openness.

Customers enter via a juice bar at the front of the building that’s shaded by a verandah. Sunshine filters through the slatted timber screens of its roof, dappling surfaces with patches of light. 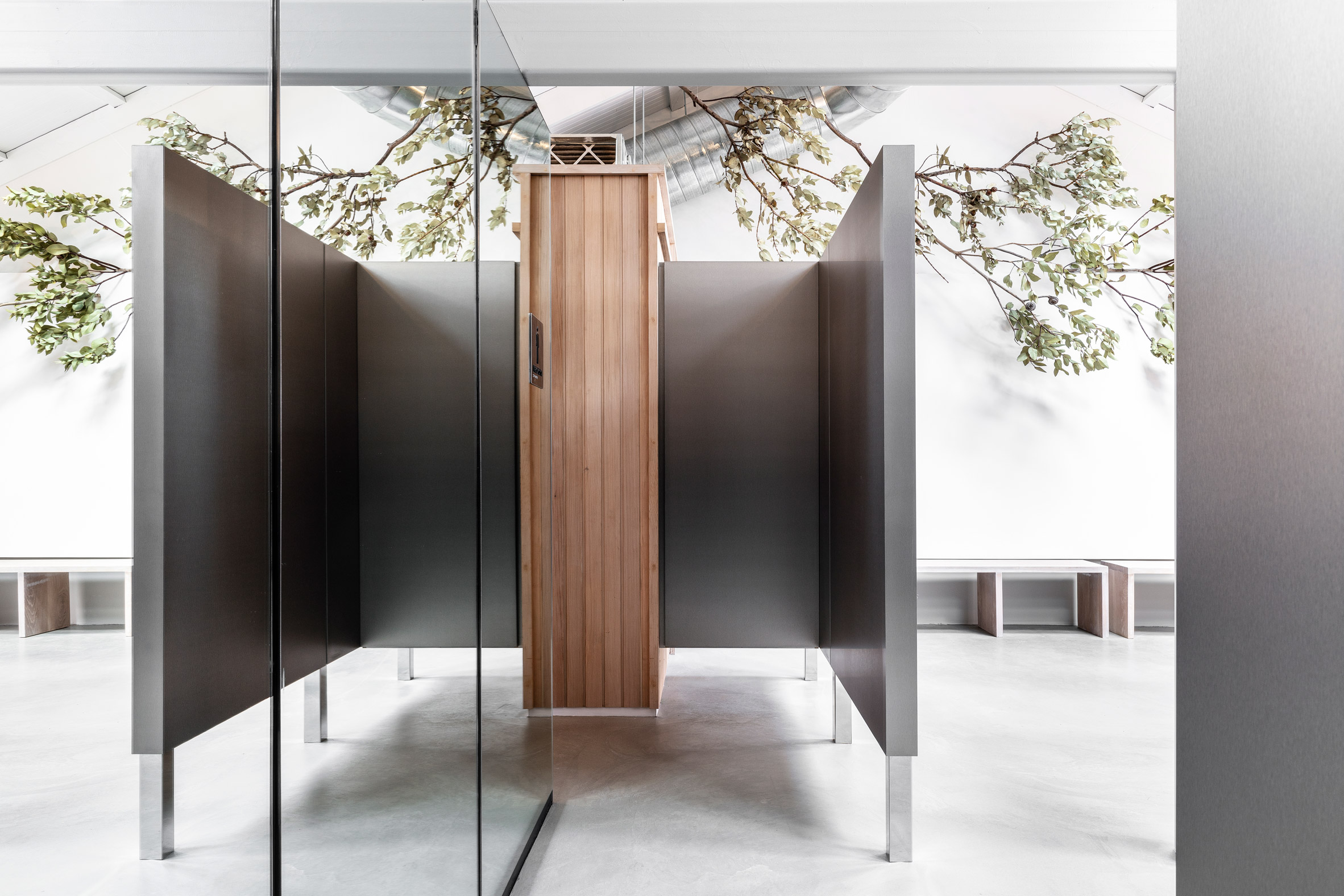 This is followed by a minimalist reception area that has a cedar bench seat running around its perimeter.

The space is crowned by leafy eucalyptus branches, which have been wound around a wire so that they appear to be growing across the ceiling.

“These are branches that we sourced with the help of a florist,” informed Trefely. “They are a particular type of eucalyptus that dries well. They move delicately and cast shadows.” 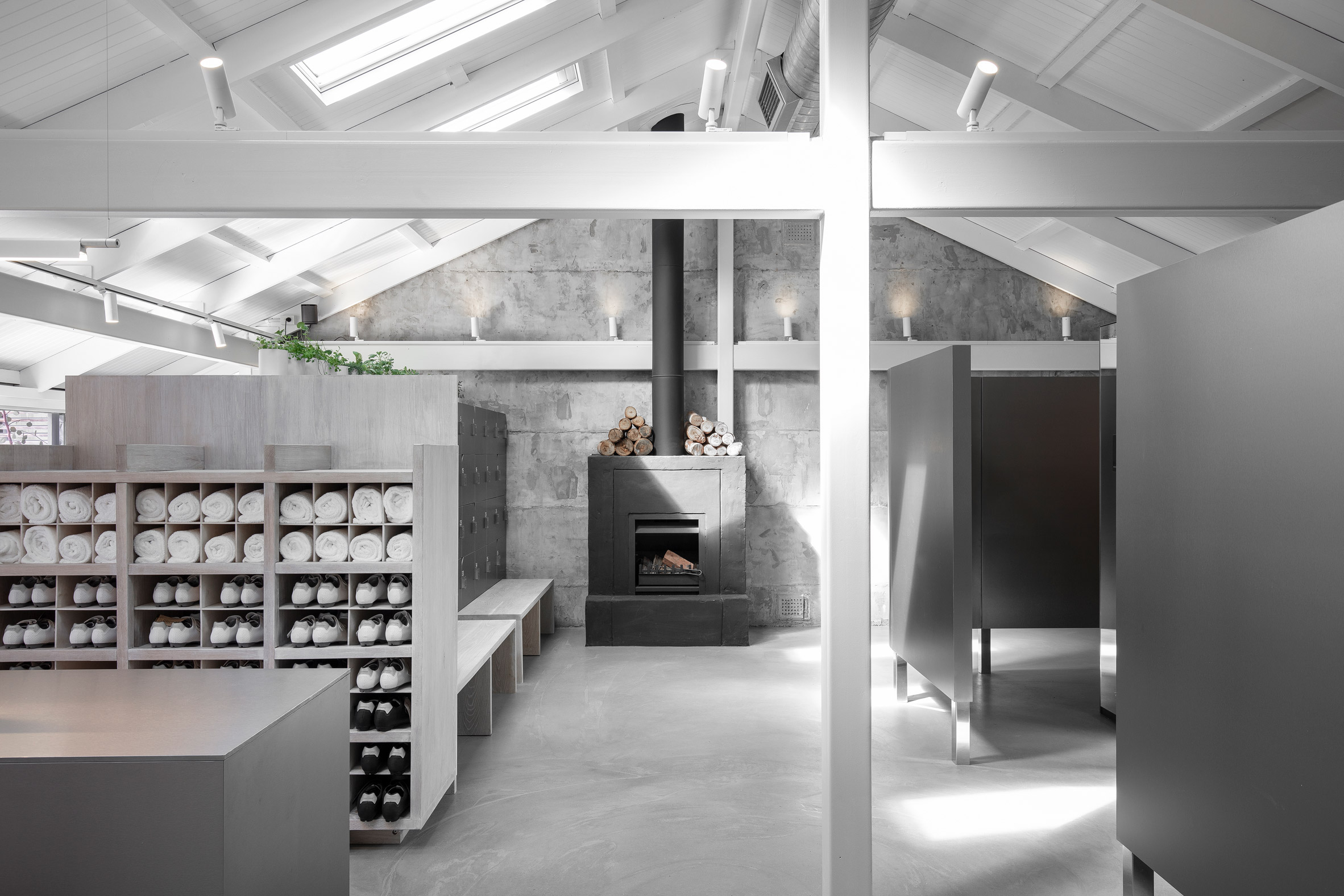 The reception leads through to the ice baths and sauna, while a spin room is located up on the first floor.

This includes the guest lockers and curved screens that wrap around the changing and treatment rooms. These have purposefully been made to sit below the ceilings to amplify the centre’s lofty interior. 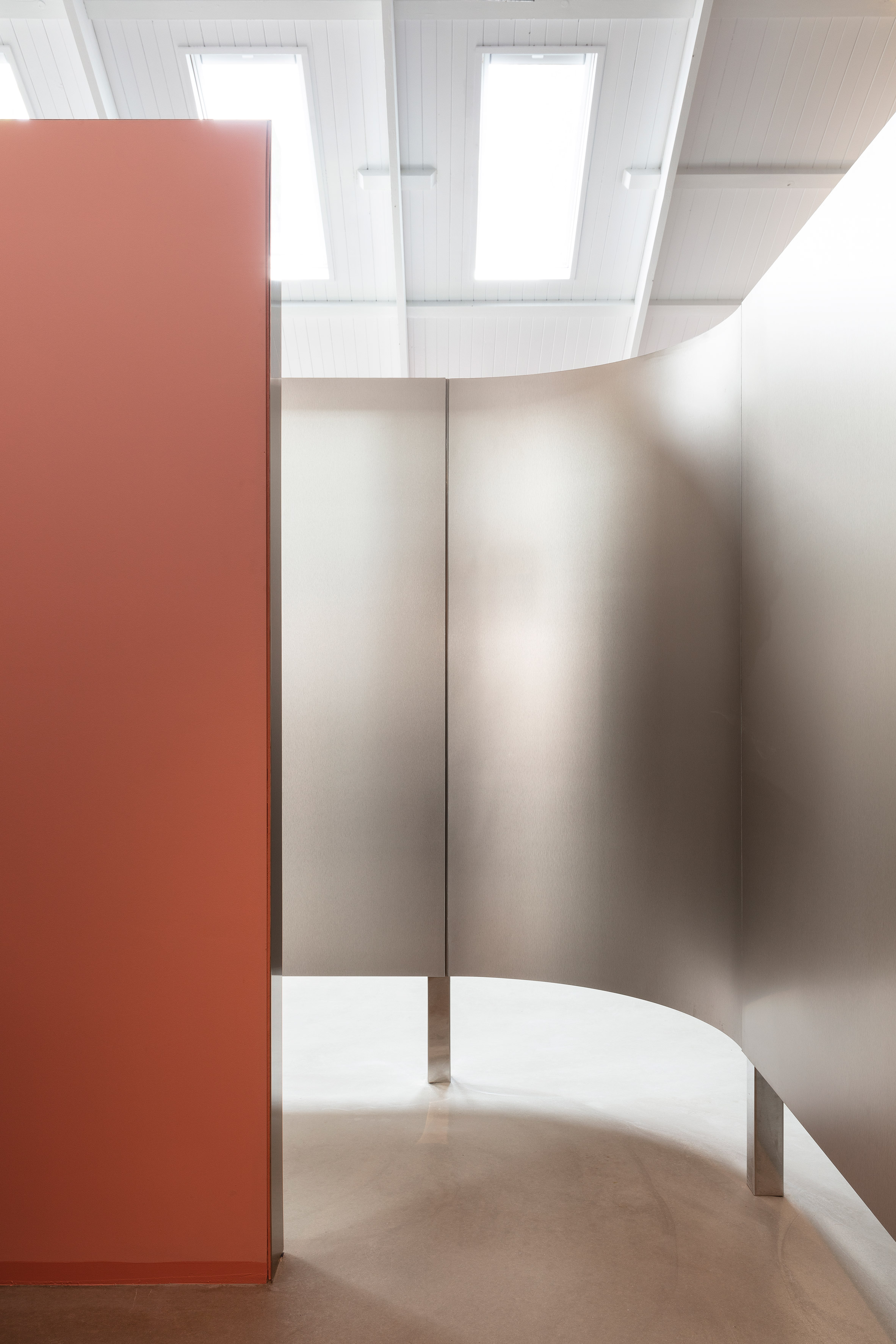 Grey concrete flooring creates continuity between the different spaces, along with white-painted timberwork and grey walls.

Certain fixtures like the sink basins and vanity stands have been made from contrasting orange granite. Some surfaces have also been clad in an array of off-white tiles that were cut by hand. 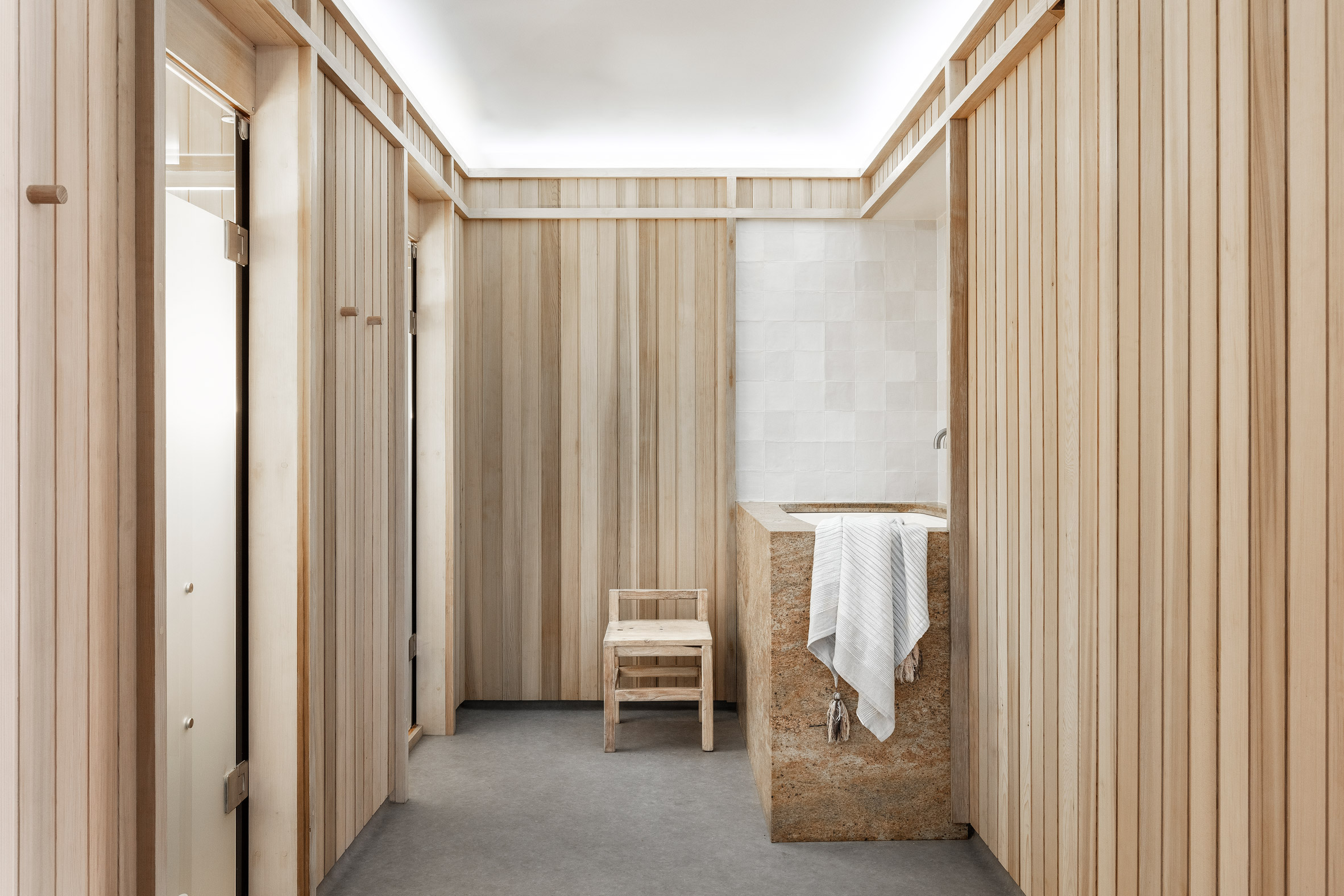 Trefely told Dezeen that sound was also a particularly important consideration in the design process.

“Both the amplification of sound, as music, as well as the acoustic attenuation has been considered in different areas,” she said.

“As an example balanced speakers wash the reception space with a curated playlist that leads occupants either through to the spin room, where there is high energy strong bass music or into the acoustically-insulated sauna room, which is a space for quiet contemplation,” she continued.

“The music or the silence dictates a particular mood or designated programme for the space.” 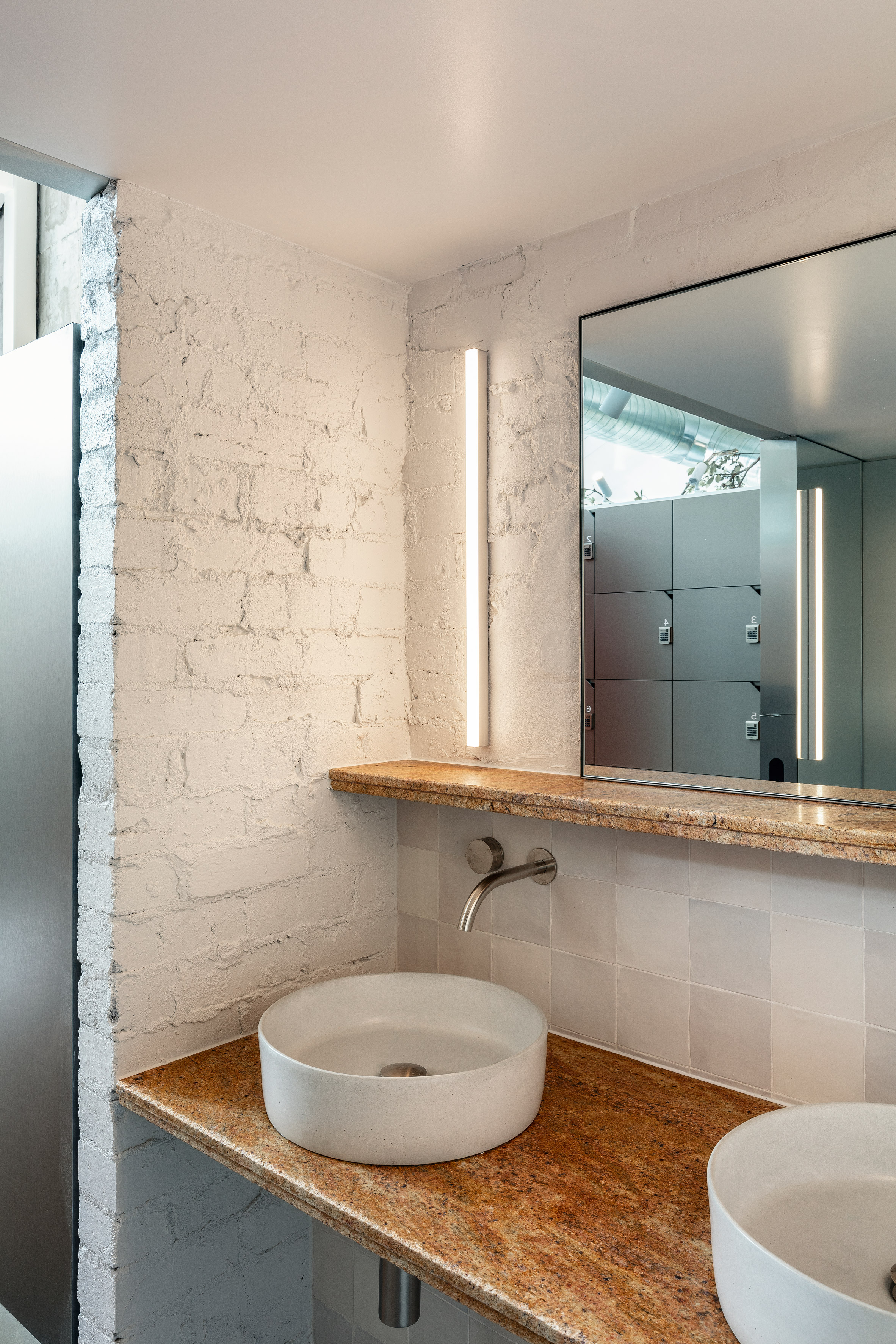 The practice took care to ensure that there is a gradual transition from the naturally-lit open entrance into the darker and more intimate spaces such as the gym and sauna beyond.

Spotlights have therefore been dotted across the ceiling beams and simple strip lights have been placed vertically on the walls. 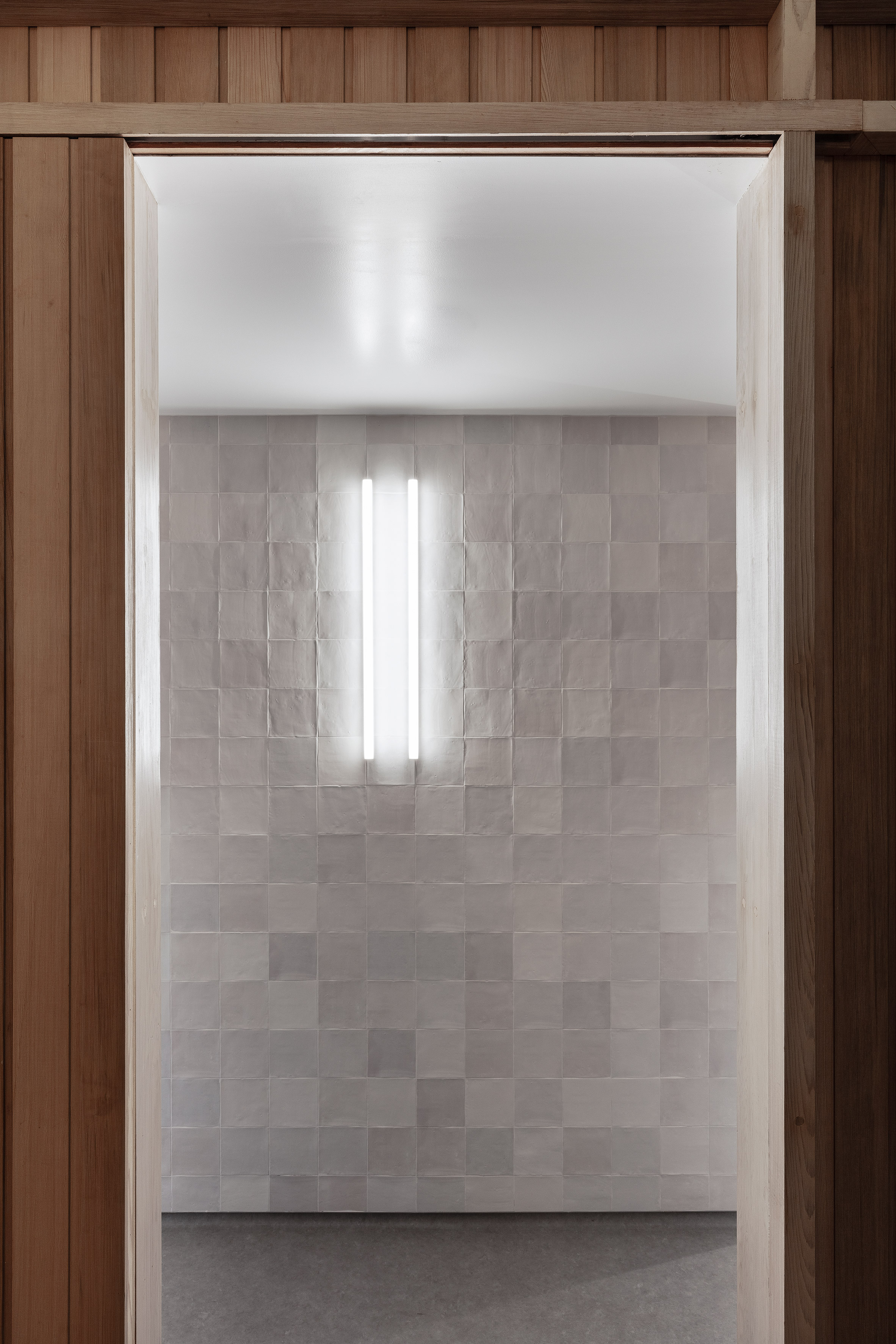 Other design-focused wellness spaces include the Euphoria spa in Greece, which is carved into the base of a mountain, and Yoko Kitahara spa in Israel, which occupies an Ottoman-era home.

Photography is by Tom Ferguson.