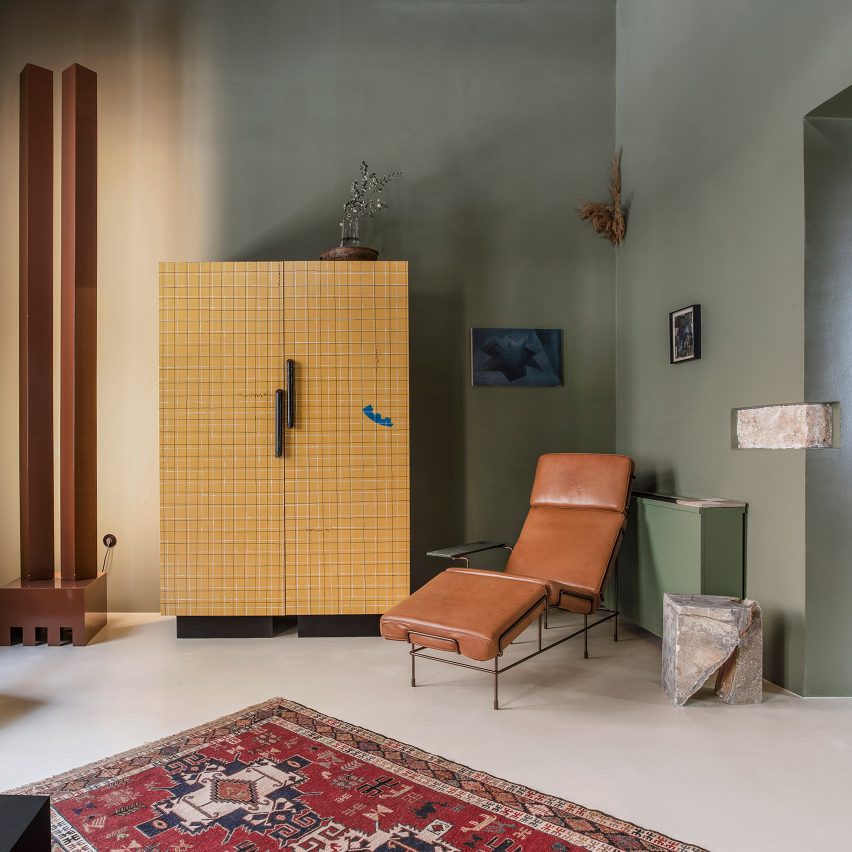 Greek designer Stamos Michael mixed his own creations with local artworks and modern furniture classics to form the striking interior of Esperinos, a guesthouse in Athens.

Esperinos is situated in the Greek capital’s Filopappos Hill area, taking over a single-storey residence that dates back to the 1930s.

The house used to have a traditionally domestic layout, but when local designer Stamos Michael was brought on board, he decided to knock through all the existing internal walls to form an open, gallery-style space.

Dotted throughout is a mixture of contemporary and classic furnishings that are meant to give visitors a “new way of experiencing the cultural universe of Athens”.

A few of Michael’s own pieces appear in the guesthouse’s living room. This includes a pine and plywood storage cabinet that’s been handpainted to feature a black-and-white chequer pattern.

It sits beside one of the designer’s lamps, which comprises two towering, rust-brown columns of powder-coated steel.

There’s also a sculptural chair by Michael that features a metal pole running through its backrest and a small stool he crafted from two blocks of stone found on a quarry in Tinos, a Greek island in the Aegean sea.

Guests can relax on a brown-leather edition of Konstantin Grcic‘s Traffic lounge chair, or on the sofa at the rear of the room which is dressed with a mismatched array of throw cushions.

A doorway looks through to the kitchen, which has been finished with emerald-coloured cabinetry and black, industrial-style shelves that display crockery.

Like the other rooms in the guesthouse, the kitchen has been decorated with a piece of modern art. All the works were curated by local art foundation Grace – founded by Michael in 2016 – and will be regularly changed throughout the year to spotlight different creatives working in the Greek capital.

The bedroom sits beneath the guesthouse’s pitched wooden roof on a newly constructed mezzanine level, accessed via a set of jet-black stairs.

Terracotta tiles, similar to those used on the balconies of Greek apartment buildings, have been used to line the staircase landing and one of the steps.

Surfaces throughout the house have been painted moss green or a rich, plum-purple hue. Michael has also carved out small sections of the walls to reveal the property’s stone structural shell.

Guests will also have access to a private back garden that’s dotted with tubular-frame seats by French architect and designer Robert Mallet-Stevens.

Including an outdoor space in the house was particularly important to Michael, who had heard elderly local residents talk fondly of gathering in gardens and alleyways during the 1960s to listen to music or watch football matches.

Esperinos joins a growing number of contemporary design-focused spots to stay at in Athens, which is largely popular amongst holiday goers for its wealth of ancient landmarks.

Nicolas Bellavance-Lecompte, the owner of Athens’ Carwan Gallery, recently told Dezeen in an interview that the city is emerging as a creative hub, and could even be considered “the new Berlin”.

“It’s almost like if the city was sleeping for 10 years during the [financial] crisis and is now ready to bloom again,” he added.

Photography is by Margarita Nikitaki.

The post Esperinos is a design-focused guesthouse in Athens appeared first on Dezeen.