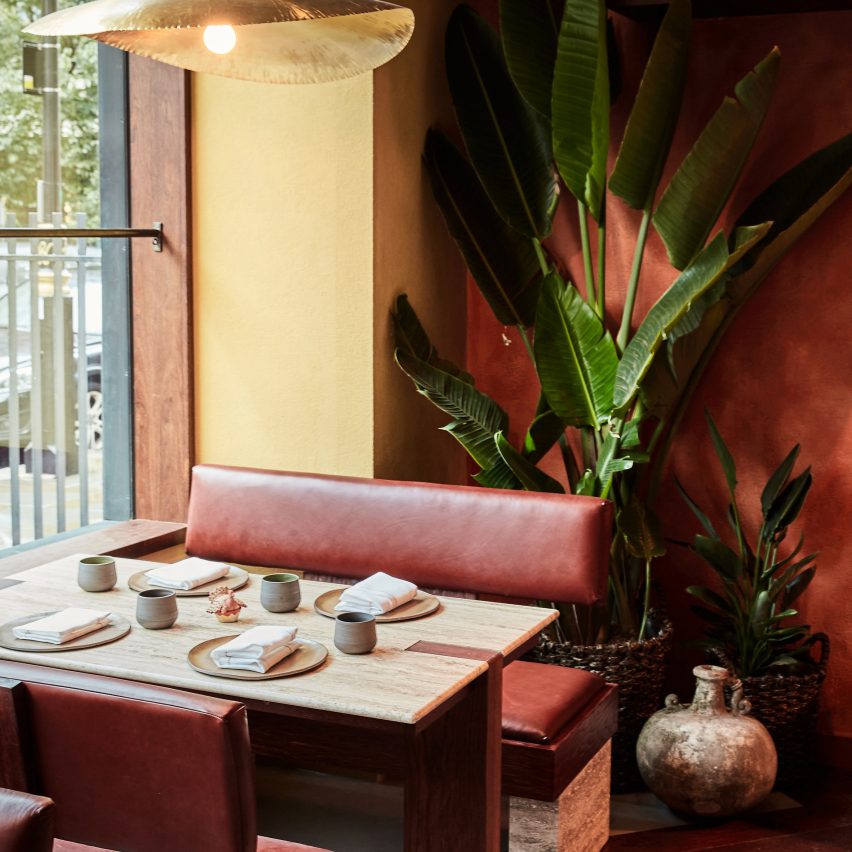 Yucatán, Oaxaca and Mexico City are some of the places that the founder of studio A-nrd visited in preparation of designing the interiors of Kol, a restaurant in central London.

Kol is situated in the capital’s Marylebone neighbourhood. It’s headed up by notable chef Santiago Lastra, who has designed the menu of the two-storey restaurant to reflect the rich culture and cuisine of his birthplace, Mexico.

London-based studio A-nrd was tasked with bringing an equally authentic sense of Mexico to Kol’s interiors. The studio’s founder, Alessio Nardi, embarked on an extensive field trip to get a better understanding of the country.

“There is only so much you can discover in books and the internet – you miss the real experience, how a place makes you feel which is very important to translate into an interior project,” explained Nardi, who runs A-nrd alongside Lukas Persakovas.

“Visiting masterpieces in person like the various works of Luis Barragán, and Frida Kahlo and Diego Rivera’s house in San Angel was very moving,” he told Dezeen.

“That moment when you just free your mind and become very perceptive of small details you see in vernacular buildings and anonymous furniture, colours and material combinations, ideas start sparking.”

The colourful architecture of Mexican architect Luis Barragán has particularly influenced the look of Kol’s ground-floor dining room, where walls are been washed with pink, buttery yellow or burnt-orange stucco.

At the centre of the room is an open kitchen. It’s anchored by a trio of oakwood islands, which are in-built with ovens, stoves and shelves for storing pots and pans.

Towards the back of the kitchen are a fire pit and a comal – a type of grill used throughout Mexico and South America to make tortillas, or toast spices and sear meat.

This entire area is clad with black clay tiles that are meant to emulate tezontle, a volcanic rock native to Mexico.

Travertine-marble dining tables are dotted throughout the room, each surrounded by oak chairs.

A row of bench seats upholstered in mahogany-brown leather has also been placed down the side of the room, directly beneath the restaurant’s expansive windows.

A-nrd made all of the furnishings bespoke, with Nardi taking inspiration from pieces that he came across in Mexico’s second-hand shops.

“I love to visit unpretentious second-hand furniture stores and charity shops, I think it really gives you a grasp of what people had in their homes over time which is quite different from place to place,” he explained.

The restaurant’s lower-ground floor is accessed via a raw-steel spiral staircase. It’s enclosed by a curved screen made up of panels of clear and amber-hued glass.

Downstairs is what’s referred to as the Chef’s Table room, where up to 22 guests will be able to watch Kol’s chefs cook up-close and get an intimate insight into Lastra’s thought process behind each dish.

At one end of the room is a leafy array of tropical plants, included to offset the surrounding concrete walls, while on the other end is a set of oak-framed doors that look through to a small kitchen.

A long oakwood table runs down the middle of the room that can be split up to suit different-sized groups of diners. Suspended directly above are a series of lights by Mexican designer Fernando Laposse, which are crafted from Totomoxtle – a marquetry material made from the cusk of heirloom corn species.

Laposse, who developed Totomoxtle himself, has also used the material to make an art piece for Kol’s entryway.

Adjacent to the Chef’s Table room lies Kol’s in-house bar, Mezcaleria, where diners can head for drinks before or after their meals.

Intended to have a more relaxed, beachier feel, this space is finished with wooden flooring, cane seats and seagrass pendant lights.

A-nrd was established by Nardi, who originally hails from Milan, in 2015.

Its Kol project joins a number of eateries that have opened this year in London – others include Maison Francois, an opulent bistro with interiors inspired by Ricardo Bofill’s architecture, and Silo, a zero-waste restaurant where even the furniture is made from sustainable materials.

Photography is by Charlie McKay.

The post A-nrd looks to Mexico to craft interiors of Kol restaurant in London appeared first on Dezeen.