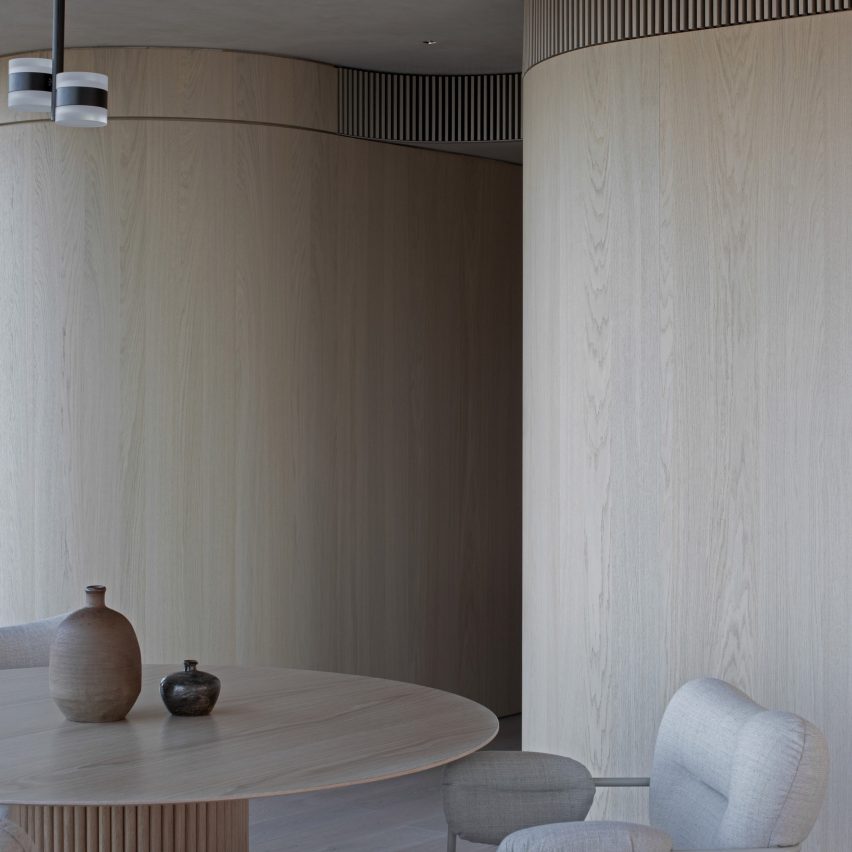 Towering, pale wood volumes hide the functional elements of this apartment in Melbourne, Australia which has been overhauled by local architecture studio Edition Office.

The Melburnian Apartment – which is shortlisted in the apartment interior category of this year’s Dezeen Awards – is set within a residential building in the Southbank neighbourhood, overlooking the city’s arts precinct and royal botanical gardens.

Prior to Edition Office‘s intervention, it had featured several rectilinear rooms that were awkwardly crammed into the apartment’s crescent-shaped floor plan.

The studio was asked by the young couple who own the apartment to create a less restrictive, easy-going layout that was more suited to their often unpredictable social lives.

After knocking through a majority of the existing plaster-board partition walls, Edition Office decided to tuck away the functional elements of the home inside a trio of full-height storage volumes.

“The design response is inherently simple, refined and calming – which restores and creates freedom,” explained the studio.

“Circulation drifts and flows around the formal partitioning elements, allowing for a space with no doors,” it added. “In this way, the clients move from sleep to morning coffee to home office to showering to washing to working to thinking in a continually evolving and smooth loop.”

Each of the rounded volumes are externally lined with oiled white oak wood, while the insides are clad with grey granite tiles – two materials that the studio thought would offset the apartment building’s “textural aloofness”.

One of the volumes contains a kitchen, which has been minimally finished with handleless timber cupboards. The second volume has been in-built with a sofa upholstered in tan-brown leather and a small desk, which are meant to have the same feel as a study cubicle in a library.

The third and final volume has been made to curve around a freestanding desk to form a larger home office. Several steel shelves have been incorporated so that the inhabitants have a place to display their wide array of novels.

An additional bathroom is also integrated into the back of this volume, which is almost entirely covered with slim white tiles. It also includes a marble-effect vanity cabinet.

Edition Office has carefully arranged the volumes to provide shade to living spaces, which were often flooded with sunlight from the floor-to-ceiling window that curves around the apartment’s front elevation.

“Their curved forms invite light and shadow to drift and smear around corners, and allow for a home that has too much natural daylight to provide the sanctuary of shadow and the textural delight that comes with it,” added the studio.

The volumes also block sightlines to the master bedroom in the corner of the apartment, which is simply separated from the rest of the plan by a raw-linen curtain.

Edition Office was established in 2016 and is led by Kim Bridgland and Aaron Roberts. The studio was named as emerging architect of the year in the 2019 Dezeen Awards.

In this year’s awards, its Melburnian Apartment will compete against projects such as La Nave by Nomos, a flat in Madrid that occupies an abandoned workshop, and Jaffa House 4 by Pitsou Kedem Architects, an apartment that’s set inside a 300-year-old brick building in Tel Aviv.

Photography is by Ben Hosking unless stated otherwise.