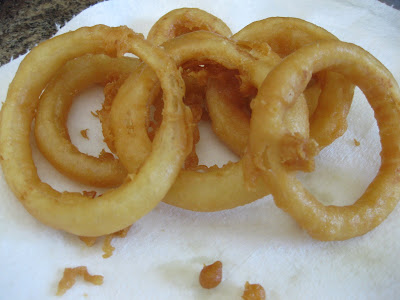 from my brother, Denton and (allrecipes.com with our changes)

3 cups flour, divided
2 eggs, separated
1 cup Fat Tire Beer, plus more for thinning (its better, I promise)
4 Tbsp butter, melted
salt to taste (a pinch or so… we usually end up doing about 1/4 tsp, but you can start with less and add more later after you test one)
3 large Vidalia or Walla Walla onions (Vidalia are our favorite)

Put 1 cup flour into small bowl for dipping onions before the batter. In a medium bowl, beat egg yolks (saving the whites for later in a small bowl). Add in beer, butter, and salt. In a large bowl, add 2 cups flour. Slowly stir the egg mixture into the flour and mix well.  Batter is different every time I make it due to humidity and time of year etc. So sometimes it is a little thicker and sometimes it is thinner. Add more beer from the bottle until the batter resembles pancake batter. Sometimes we end up using the entire bottle. Sometimes less. But get it to a pancake batter consistency. Allow to stand for 30 minutes to an hour. Heat up deep fryer to 375.

Coat each onion ring with a dusting of flour (to help the batter stick) and then dip into batter. 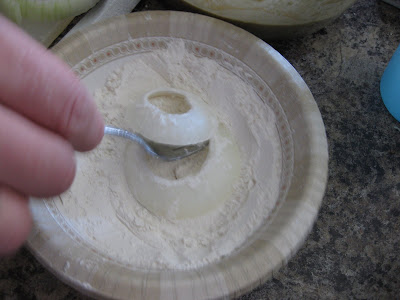 Using a fork, allow some of the batter to drip off a bit. 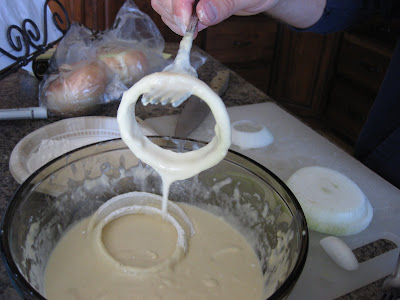 Carefully dip the onion ring into the hot oil. You don’t want to just plop it in there or the batter will fly off and your onion ring won’t be as pretty. (But it still tastes the same.) I usually fry one or two and then taste them to see if the batter needs more salt. You don’t want them salty. Just barely there for flavor. We dip the onion rings in various things so you don’t want an overpowering salty flavor. So we start with 1/4 tsp and that is usually enough. Sometimes it needs a dash more, but not too often. Once you’re happy with the taste, continue flouring and battering and frying until you get the amount of onion rings needed. 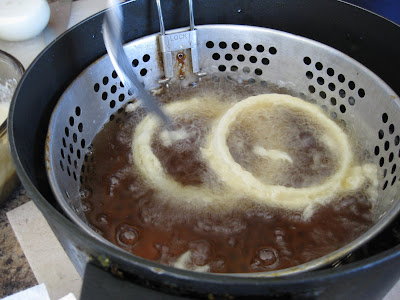 Deep fry until rings are golden brown. Usually 3 minutes or so. I use my larger fryer (not shown) and can get about 4-5 rings at a time. And I flip them over half way. 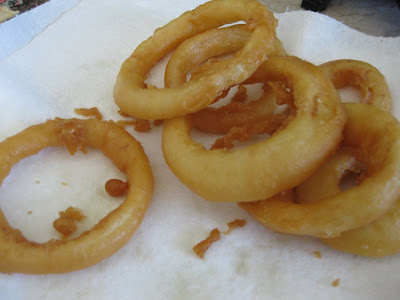 Note: If you don’t need to use all the batter, it can be refrigerated for up to 2 days. Admittedly, this makes a large batch. LARGE! But don’t despair, that means more for later. Just put the onions and batter in the fridge and make some more later or the next day. It’s still great. Follow same directions as above… flouring first, then batter, tap… and fry to golden. 🙂 ENJOY! YUM!!!!