Baruchfoundation Leave a Comment on The Recipe Blog: Chicken Noodle Soup
This is an update from an older post. Each time I made this, I found I was making the same adjustments. It was time to update the blog to reflect that. I love this recipe and always have lots of compliments when I’ve taken it to people.

2 lbs chicken, cooked & cut up
I prefer to cook my chicken in the crockpot with 1 cup water & 2 tsp chicken bouillon & sprinkle with pepper.

Once chicken is cooked, in a large pot combine:
2 quarts chicken broth, I use Pacific organic chicken broth
1 quart water 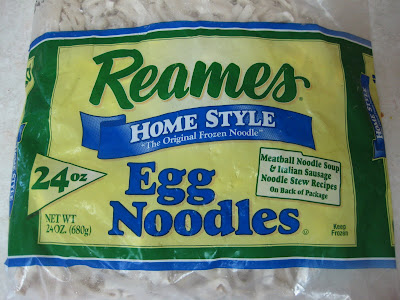 Start cooking the noodles in their own pot of water.Important: I usually sprinkle just a little bit of chicken bouillon in it to give them some flavor. Cook noodles until half done. These noodles take a bit to cook but I’ve fooled many people into thinking they’re homemade… so it’s worth the time to let them cook. (I’ve never mastered the whole homemade noodle thing, so I leave the work to Reames. However, my sister makes my mom’s homemade noodle recipe all the time. Click here if you want authentic homemade noodles.)
Meanwhile, put water, chicken bouillon granules, chicken soup base, cream of chicken soup, minced onion, and pinch of minced garlic in a large pot. 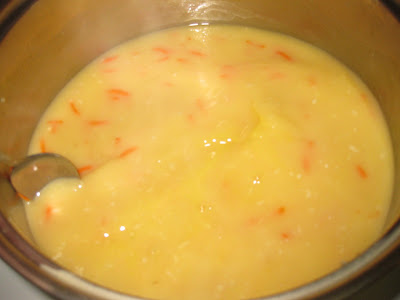 I prefer to cook it on medium to help start the flavors to mix together. I use a whisk to make sure the soup mixes into the broth well. Once it is slightly boiling, grate carrots into the pot. These add great flavor and texture. And my kids eat the soup better if they are grated and not chopped. Plus, they cook faster that way. Allow the soup to continue a medium boil.
Once the noodles are almost done, throw them in the broth and let them finish cooking and absorb the flavor. The broth will also thicken from the starch of the noodles. Keep the soup at a rolling boil, being sure to stir often so the noodles aren’t sticking to the bottom. 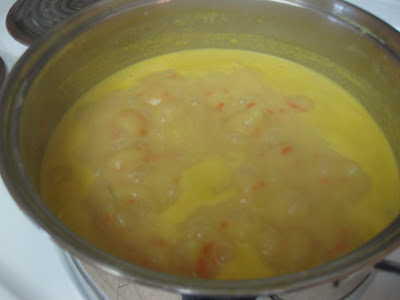 Finally, add chicken. Add a dash of pepper for taste. I usually taste test along the way just to be sure it doesn’t need a little more chicken soup base or bouillon. The cream of chicken soup usually does a great job of adding great flavor while still keeping the broth very chicken-noodle-like. I let it cook just a couple minutes past the noodles being done to be sure the chicken has absorbed lots of flavor from the broth.

After the noodles are done and it has passed a couple of taste tests, serve up with your favorite roll, breadsticks, or just a simple side salad! I promise you won’t be disappointed. It’s hard to mess this soup up.
It makes a big batch. Perfect for making some for your family & taking some to the neighbors or someone who just needs homemade chicken noodle soup in their life! 🙂 This soup is also amazing served over homemade mashed potatoes! Oh heaven!!!