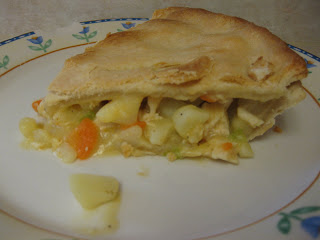 I am reposting the recipe because it has been on the blog for over 2 years and I took some new pictures. Plus, I’ve found making individual pot pies rather than 1 big one helps them cook better.

Crust:
Click here for the recipe. I just used the dough from a previous batch and let them thaw all day to room temperature.

Roll out one crust and place it in the bottom of 9 inch pie dish. Roll out top crust and leave until your filling is done.

Place chicken in glass baking dish and sprinkle with salt & pepper. Cover with foil. Bake chicken at 350 for about 40-45 minutes or until done. Cut up all veggies while chicken is cooking. After chicken is done, put chicken on cutting board to cool. After it is cooled, cut up into desired chunks. (Note: I’ve found that baking the chicken keeps it much more moist than boiling it. If you don’t care, then just boil it or for even quicker cooking time, cook it in a George Foreman grill and sprinkle with the salt & pepper. This takes about 15 minutes but it’s a little crisper on the edges.)

Boil all veggies until they are still firm, but close to done. If needed, add more water if the veggies are absorbing a lot of the water. Add 3 Tbsp to 1/4 cup cream of chicken soup. Add more chicken soup base if needed to taste. Add salt -if needed- and pepper to taste. Stir in until blended, with a taste check afterward, of course! 🙂 (If you want your pie more runny/juicy add a little extra soup/water.) Let cool slightly. Add in chicken and pour into pie dishes. I buy the foil individual pie dishes. They come in a pack of 6. I just reuse them and wash them in the dishwasher! Super easy. The pies cook better as individual rather than one big one.

Put top crust on top and flute the edges. With a sharp knife, cut about 4 slits in the center to let steam escape. 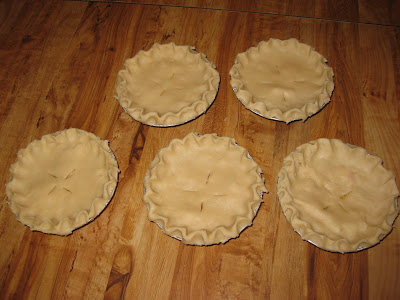 Bake at 425 for 15 minutes. Lower oven temperature to 350 and cook for an additional 10 minutes or less… just until golden brown. (I got mine a little too golden this time… as you can see in the picture.) Maybe a little foil around the edges? I’ve done that for other pies, so I guess it would work for this, too. 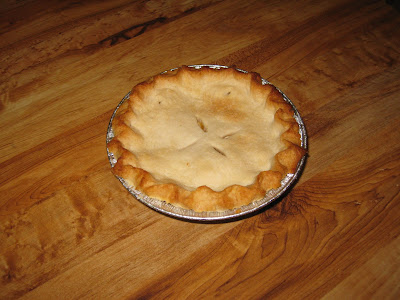 Let set up for about 5 minutes and then serve.

Note: You could do other veggies if desired. I’m not a pea or green bean person so I opted for potatoes, celery, and carrots. If you do peas, cook them separately and throw them in at the end with the chicken. I guess you could do frozen veggies, but I’ve found that fresh tastes soooooo much better. It’s worth all the effort to cut it all up and have it taste so yummy.