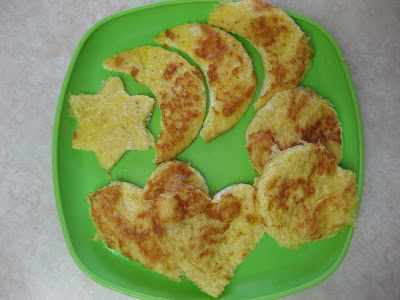 As gross as this may sound to some of you, this idea came to me as a stroke of genius to help my little boy. He didn’t eat food until he was 2 (and that was with the help of a therapist). We learned that his eating problem was because of his sensory problems. And we learned that his sensory problems were because he has autism. It is mild but it’s still very much there. Anyway, he was sick of eating eggs the same old way… fried or scrambled. But he wouldn’t eat them with stuff mixed in. So this idea came to me one day. And it has been a wonderful hit ever since. He requests these eggs at least once a week.

Directions:
Preheat a medium sized pan on stove at just above medium heat. Break desired amount of eggs in a bowl. We usually do 4. Add a very small amount of milk. Sprinkle salt and pepper. Beat with a fork. Put a little butter in the pan so the eggs don’t stick. Make sure it is spread all around the bottom of the pan. I’ve used Pam. I’ve found butter does a better job of not sticking for some reason with these eggs.

Cook these eggs almost like an omelet (except you don’t fold it in half). Pour eggs into pan and allow them to cook on one side. They’ll start to be a little done on the top, too, but you don’t want to burn the bottom. Carefully, but quickly, flip it over with a turner. You might have a little bit of egg fly out of the pan. It’s okay. Let the other side cook. Once done, remove from heat and place on a plate. Get your cookie cutters ready!

I took this picture before I had cut one of the shapes. My son refers to the circle ones as moon eggs (eventhough he knows what a circle is). 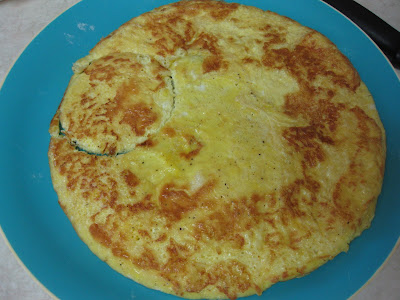 Continue with other shapes, being careful to use as much of the egg as possible. I usually don’t have hardly anything left over. When I do, I just eat those myself. 🙂 It is fun to change the shapes up for different holidays/seasons. These are our basic shapes. My son calls the crescent moon “banana eggs.” Whatever works! 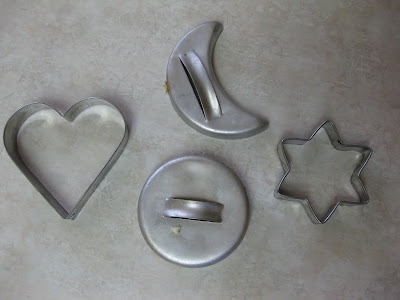 Put all the shapes on a plate and serve with desired side dipping sauce. It’s usually ketchup for my kids but you never know what they’ll ask for. However, there’s never any shapes left. They ALL get eaten every time.

If you want to make a larger batch, just use a bigger pan or two medium pans.